For a long time I’ve been interested in using “gimmicks” in Pirates CSG games – this is generally any kind of strategy that uses weird abilities or funky game piece combinations to win.  The opposite would be speedy gold fleets, Sac Captains, etc.  Over the years I have seen gimmick fleets win a surprising number of times – perhaps not against hyper-competitive tournament fleets, but impressive victories nonetheless.  This post will highlight some of the most successful gimmicks with links to the fleets and/or games they’ve been involved in.  Feel free to comment below what gimmick fleets you’ve used to win!  (game pieces can be found in the Master Spreadsheet)

This is a fleet designed to control the enemy’s fleet using a combination of All-Powerful, L-movers, and powerful Mysterious Island effects.  I created it back in 2012, my second year in the online community.  It’s still my favorite gimmick fleet and sometimes my favorite fleet overall.  Against some other gimmick fleets it went 4-1 in 5 games!

Using the “This ship cannot be shot at while docked” ability, you can make home island raiders even scarier than they normally are.  Dock, take a coin or several with Grim the Savage, then redock next turn to take more or simply stall out while your opponent can’t shoot.  When combined with a 10 master (very difficult to take down with ramming and boarding) and/or Ghost Ship/Secret Hold (very hard for opponent to take gold back before you dock it home), this is one of the nastiest combos I’ve ever seen.  This is a strategy I’ve pulled off a few times – first with 200 point Water World (one of the only games I’ve ever played where EVERYTHING went right; 35-0 victory), and also in a VASSAL game with my Best Raiders of Spain fleet (29-15-0 victory).  There were some house rules in play, but the Cursed fleet that won my 6×150 game used the wild Guichuan combo to devastating effect.  Check out this crazy turn!  This was absolutely filthy.

Grim the Savage teamed with Bianco’s Haulers for an international stealing party for the ages, raking in a TON of gold. I think the Guichuan may have stolen 6 coins from the Golden Cranes fleet and another 6 from the JV’s home island. If someone had been stupid enough to sink her and trigger Neptune’s Figurehead, there’s a solid chance she would have sunk the Eighth Wonder at the end or even gone after the French or EM HI’s for more booty.

Now that it has succeeded twice, it can honestly be called a very viable combo in large games.

I piled all of the ship-stealers (Commander Temple ability) into one fleet.  I used it to win a narrow Circle of Blood game 85-81.

These fleets needs to be tested more, but it showed some potential.  This fleet won 55-0.  Even in a non-Pirate fleet, Calypso’s whirlpool creation ability can be used to dramatically shorten gold running voyages and allow for sneak attacks on enemy positions. (including a win over a fast Pirate fleet) 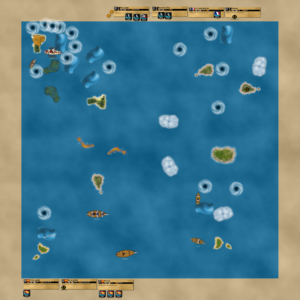 LordStu’s funny idea has real potential – it went 2-1 in a 3 game series against the original UPS fleet!  I’m not finding the fleet archived from MT or in a saved picture, but it basically uses ships stuffed with oarsmen to win if you can get the DMC UT home and convert all the oarsmen into 16 gold.  XD

Thanks for reading about how you can use gimmicks for the win!  Comment below your own improbable victories using gimmick fleets!

Posted in Uncategorized and tagged Strategy.