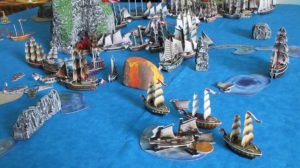 An epic game of Pirates in progress!

Welcome to the world of Pirates CSG!  Glad to have you aboard the ship!  😀

This might be a bit overwhelming at first, but it’s meant as a comprehensive Beginner’s guide to Pirates CSG for people who have just gotten started.

First off, introduce yourself!

Next, you’ll want the rules for the game. You likely received them in a pack or other purchase, but if not, here they are:
Start Here rules
Complete Game rules
Master Keyword List (very useful to have on hand since your copy of the Complete Game rules won’t have all the keywords in it)

-You’ll need a BoardGameGeek (BGG) account in order to download those Complete Game rules and the Master Keyword List, but we’d highly recommend signing up. BGG is a great website, and in terms of Pirates CSG it has a very unique files and pictures section not found anywhere else on the web.

-Alternatively, you can download my Basic Rules, which combine the Start Here and Complete Game rules into one document. However, keep in mind that I’ve made some edits to the rules to make the game more realistic and adding a few house rule tweaks. (House rules are custom rulings that players come up with based on playing preferences and other factors) If you use them, just make sure to tell anyone else that uses them that some stuff has been changed. That said, the changes are generally for the better, so have at it!  🙂

Sometimes the rules won’t cover how to deal with a situation when playing the game. In those cases, you’ll want to have these documents:
The Pirate Code (FAQ/Errata)
Reference Diagrams

-AFTER consulting the various rules documents, if you still don’t have an answer to your question, ask it in the Rules thread (where you can also clarify what violates the No-Duplicates rule and what doesn’t). Luckily for the community, Woelf, the former official Rules Arbitrator for Wizkids when the game was still in production, has remained active! If nobody else can answer your question, he will definitely be able to. (but he’s a very busy man, so give him time to answer!)

The cheapest set is Ocean’s Edge. This is a nice starter set between the cost, the diversity of game pieces it offers, and the fact that it has all of the “Big 6” factions.

The first five sets (Spanish Main, Crimson Coast, Revolution, Barbary Coast, and South China Seas) are the most historical, and many people agree that they are the highest quality sets as well, ranking high in various surveys and polls over the years. The sixth set, Davy Jones’ Curse, is where Wizkids began to experiment more with the supernatural with the introduction of the Cursed and sea creatures. The few sets that followed DJC (Mysterious Islands, Frozen North, and Ocean’s Edge) were a mix of historical stuff and plenty of fantasy/less historical stuff such as Vikings and submarines. There were a few design changes in the Pirates of the Caribbean set, where Wizkids partnered with Disney for a movie tie-in set (keep in mind this set only has the English and Pirate factions). The final 3 sets (Rise of the Fiends, Fire and Steel, and Savage Shores) were the most “out there”, with odd ship designs joining the sea creatures and ship speeds and point costs reaching a new low in the reverse power creep (in other words, as sets were released they became less and less competitive with the stuff from the older sets).

Hill’s Wholesale Gaming is a great place to buy packs, but eBay is better for specific game pieces, used lots, great deals, and finding rare stuff like 10 masters.  You can check out my eBay history guide to see what things have sold for at auction on eBay in the past.

So you’re ready to play the game! But where to start? You’ll need a fleet, and some kind of opponent to go up against (which can include yourself playing another fleet).

If you don’t know how to play, you can check out my simple tutorials on youtube:
How to play Pirates Constructible Strategy Game Part 1: Start Here rules tutorial

Since Pirates is such a wide-open and customizable game, there’s really not a definitive “fleet-making guide”. There are so many options that it would have to be an encyclopedia! 🙂  However, I made a page on my fansite that gives the general information that you’ll want to keep in mind.

You’ll probably want to start at a small build total, such as the standard 40 points, in order to get used to the gameplay mechanics and fleet construction strategy aspect. Over time, you may develop an affinity for a specific faction or handful of factions. My Sets and Factions pages can help you determine which sets to buy and which factions to try out, based on your preferences.

If you’re very unsure of how to make a fleet or want more guidance, there are 300+ 40 point fleets at Miniature Trading (MT) that you can try out!  The fleets section in general is a great resource.

When discussing gameplay on the various Pirates sites, there is a lot to know and learn. This page has an acronym list can help you navigate the waters. I’ve also compiled some tips for gameplay, and Cadet-Captain Mike’s page has a TON of great info.

Feel free to post what happens in your games in the Battle Reports thread. (a report does not have to be long or include pictures to be good)

Guess what? You can play remotely with anyone in the world over an online server! Even if you don’t have any physical stuff!

VASSAL is an free, open source engine for running boardgames over an online server. Luckily for all of us, former MT member bj_o created a module for Pirates CSG! I made a few edits to the module in 2016, which you can find here: VASSAL module

That page has links to download the program and module, as well as a guide to getting started. In addition, I made a tutorial for how to use it.

The module has seen at least 23 players on it since it’s “rebirth” in early 2016. I’m on the module every week, and I’d love to have more opponents, especially for campaign games!

If you’re more of a collector, eBay is generally the best site for purchases. Check out this price history to see about what things are worth or have been going for recently.

You can also take advantage of Miniature Trading’s main purpose – trading miniatures! This page gives a nice overview of the site’s various features, including adding items to your haves and wants lists. Use the search for a miniature function to figure out what you have, don’t have, and want. The trading how-to guide is also quite useful. It’s often better to PM (private message) a user to ask them about a trade offer before sending it, but don’t hesitate to reach out to people either way!

Go forth and plunder, new pirate!  😀

After playing your first game, there is no limit to what you can accomplish. Try out a trade. Collect the rarest of the rare. Seek out admirals in other countries and challenge them to games on the VASSAL module.

For those who want to go deeper into these waters, boy do we have stuff for you!  😀

If you really want to “go down the rabbit hole”, there is an endless amount of content to dive into. Checking out Game Ideas would be a good start, not to mention the entire Thread of Threads. Beyond that, you can give up your soul.

Finally, Pirates with Ben might be the best site for Pirates CSG, but it’s not nearly the only one. Check out this page for a plethora of other options, many of which have unique features and community members. I am a member on all of them, so if you ever have a question, just ask.