-Check out the Informational category and the Useful tag for a lot of helpful information and stats about Pirates CSG!  To find past information from Miniature Trading that is no longer available, check out this post.

If you consult those documents and still have Rules questions, try the Rules thread. (where you can also find the No Duplicates List in the second post)

How to Build the Ships – PDF document with official diagrams, created by Cameron Neill of the Facebook group.

Pirates on eBay history – A spreadsheet with auction prices dating back to around 2011 for many of the rarest Pirates CSG game pieces, along with pack price averages and data on complete sets and numerous other categories.

There is also a wealth of information at the Wikipedia page.

More Ability Abbreviations
-Some of these are more commonly used than others.

Reverse Captain: After this ship resolves a shoot action, she may move as a free action.
S-Board: As part of a move action, this ship can initiate a boarding party against a ship up to S away from her, without having to ram. The boarded ship can’t use any boarding bonuses.
Crew Killing: Once per turn when this ship hits an enemy ship, also eliminate one crew from that ship.
Cargo Wrecking: When this ship hits an enemy ship, you may also eliminate one cargo from that ship.
Massacre: If this ship succeeds at a boarding party, she can eliminate all of the other ship’s crew.
Sniping: You may double the range of this ship’s cannons each turn, but you must roll a 6 to hit.
Crew Protect: This ship’s crew cannot be eliminated unless she sinks.
Doctor: When another face up crew on this ship would be eliminated, turn it face down instead.
Island treasure trading: After looking at treasure on a wild island, you may trade any one treasure from that island for a random treasure on any other wild island. This ship must load the traded treasure.
Ship treasure trading: Once per turn, if this ship carries treasure and is within S of an enemy ship, you may randomly trade one treasure with that ship.
Possession: If an enemy ship is within S of this ship, you can use this ship’s action for the turn to try to possess a target crew on that ship. Roll a d6; on a result of 6, the target is immediately assigned to this ship. Its nationality changes to match the nationality of this ship.
S-Explorer: Once per turn, if this ship is within S of an island, you can mark the island as explored without docking at it. The island becomes unexplored in regards to all other players.
Gold Capture: If this ship wins a boarding party, she may capture the crew with the highest point cost instead of eliminating it. A captured crew becomes cargo worth its point cost in gold when unloaded at your home island.
Fog Hopper: If this ship ends her turn in a fog bank, on her next turn she may use her move action to move out of any other fog bank in play.
UT Hoard: Once per turn, if this ship is touching another ship, reveal all face-down treasure aboard the other ship. This ship can take as much unique treasure from the other ship as she can carry.
HI Hoard: This ship may dock at an enemy home island and take as much treasure as she can carry. If able, she must leave on your next turn.

Pokéship: A non-historical ship type that resembles a Pokémon. (Examples)

Total number of ships released: 1,022 (according to CCM’s fansite) 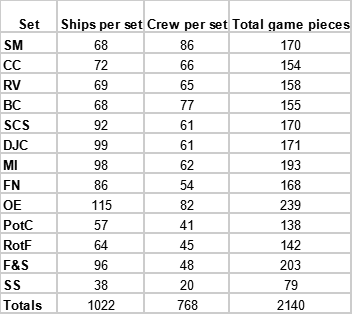 Game pieces per set, with some discrepancies.

Summaries and links to the battle reports of all of these huge games can be found on this page.

Results of the huge games Xerecs and I have played over the years.

Most of the following fleets can be found in my Fleets section or in this Google Drive folder. 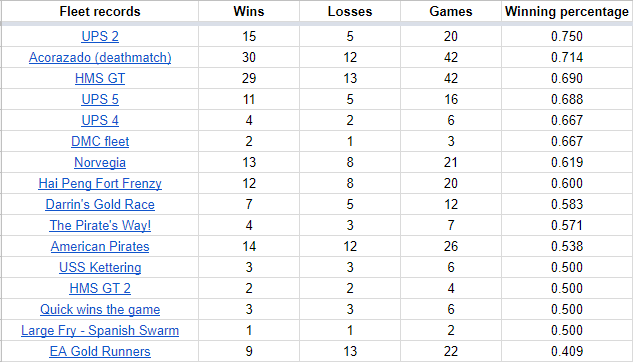 Here are my stats from Miniature Trading, which closed down on July 1st 2019.

My numbers updated through the end of 2018

Posts at Miniature Trading by month as of May 2018.

Merit points at Miniature Trading by month as of May 2018.

Plays by month over my Pirates career. Click to see some Battle Reports!

Feel free to comment below your thoughts on how I could improve the Information and Stats page!