In Pirates CSG there are 10 different factions, which are also referred to as nations or sometimes countries. The “major factions” are the Big 6 – English, French, Spanish, Pirates, Americans, and Cursed. The other four factions are generally known as the “minor factions” because they were (mostly) only around for one set and therefore don’t have nearly as many ships and crew as the Big 6.

Within the Big 6 there is a Big 4 (English, French, Spanish, Pirates) and a Big 5 (Big 4 plus the Americans). This isn’t too important, but the Cursed are not nearly on par with the Big 5 and the Americans aren’t as strong as the Big 4.

The English are the best fighting faction in the game, reminiscent of the real-life Royal Navy.  They were introduced in the first set and therefore have more ships than most other factions, giving them a ton of options.  The English do have some good gold runners, but it’s much easier to find English gunships.  They also have a lot of named crew options, making them a powerful force to be reckoned with. 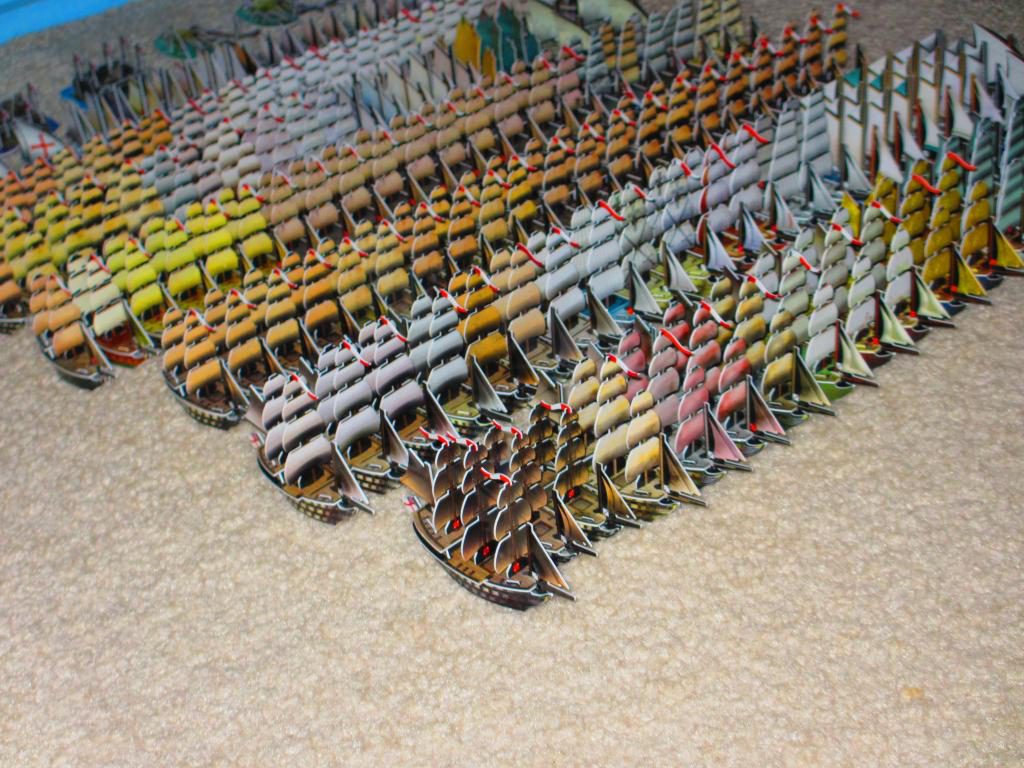 My English fleet at the 2014 Fleet Review.

The French are one of the most balanced factions in Pirates, excelling at both grabbing gold and sinking enemy ships.  They are similar to the Spanish in this regard, although the French prefer boarding more than most other nations. 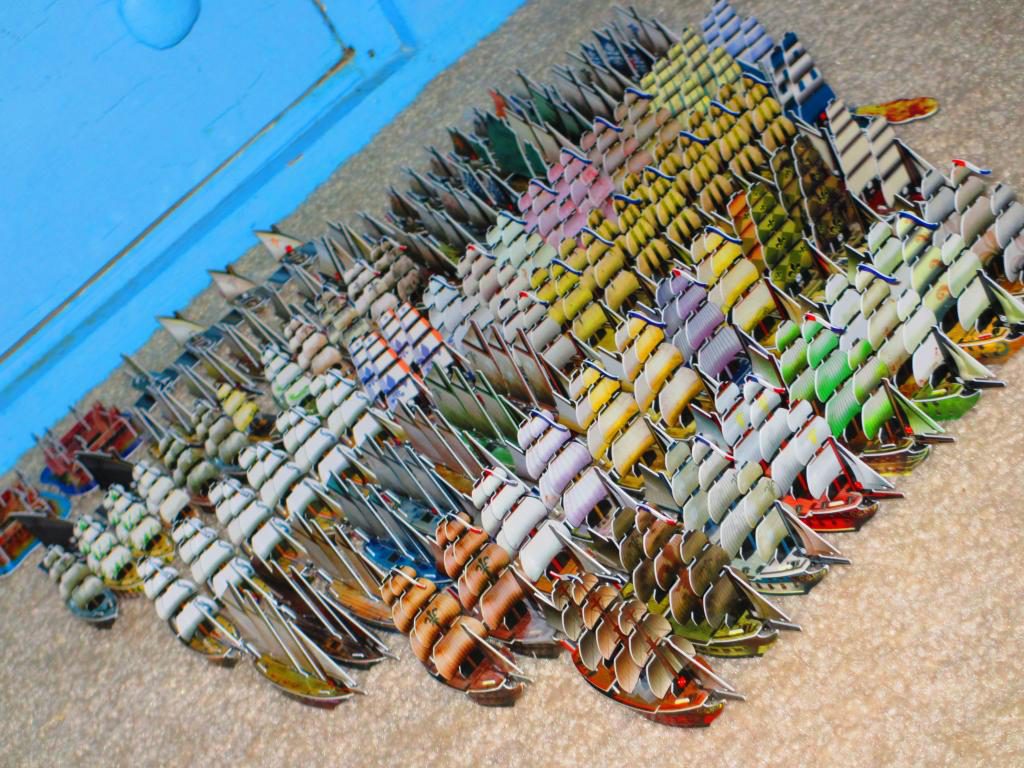 The colorful and beautiful French fleet.

The Spanish, like the English, have been around since the first set and are one of the best factions to play as.  I find them to be better at getting gold than fighting, although they do both very well.  The Spanish also have a lot of cool crew and a large number of ships that give +1 or +2 gold bonuses, which is very valuable in both small and large games.

My Spanish fleet: lots of red, orange, and crosses.

Pirates is the name of the game, so it should come as no surprise that the designers made the Pirates the best faction.  They have more ships and great named crew than any other faction.  The Pirates often have ships that are similar to those of other nations, yet they have them at a lower cost.  They are the best faction for running gold and one of the best fighting factions. 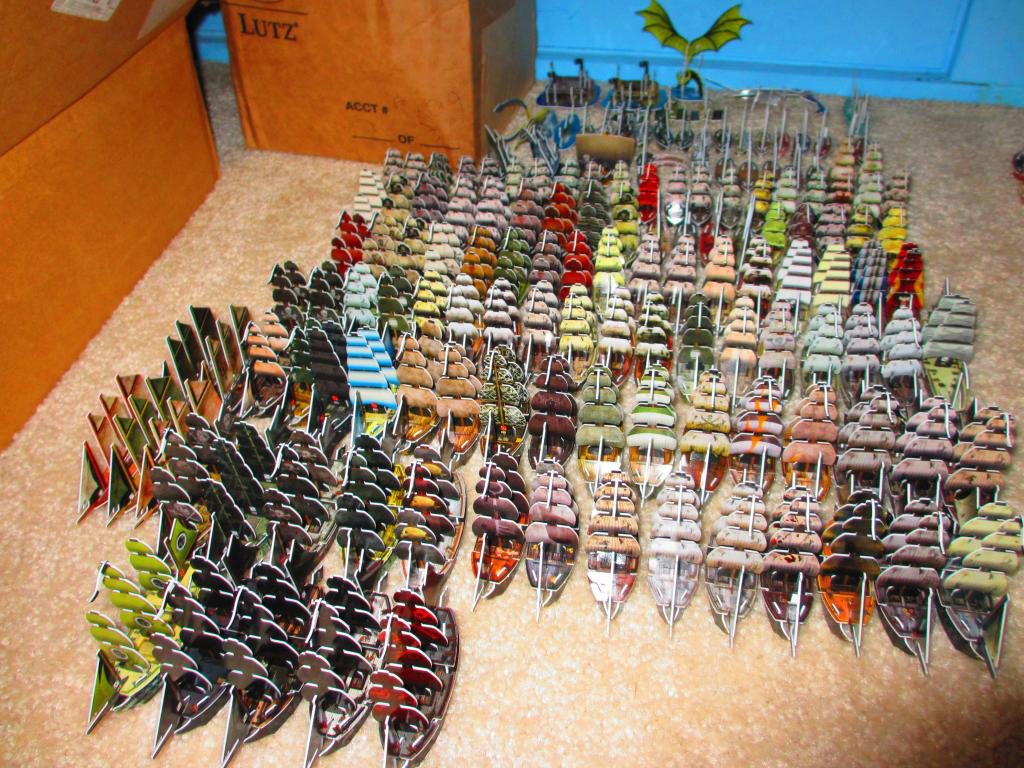 The Pirates are both the best faction and the most numerous.

The Americans got off to a strong start in RV and received more great ships in BC and SCS.  Although America is one of the best fighting factions, they lack fast ships with large cargo holds that can grab gold.  SS partly made up for this deficit, but America could still use some better gold runners.  American ships are often more expensive than similar ships of other nations, making them the hardest faction to play as out of the Big 5 (the 5 factions discussed so far). 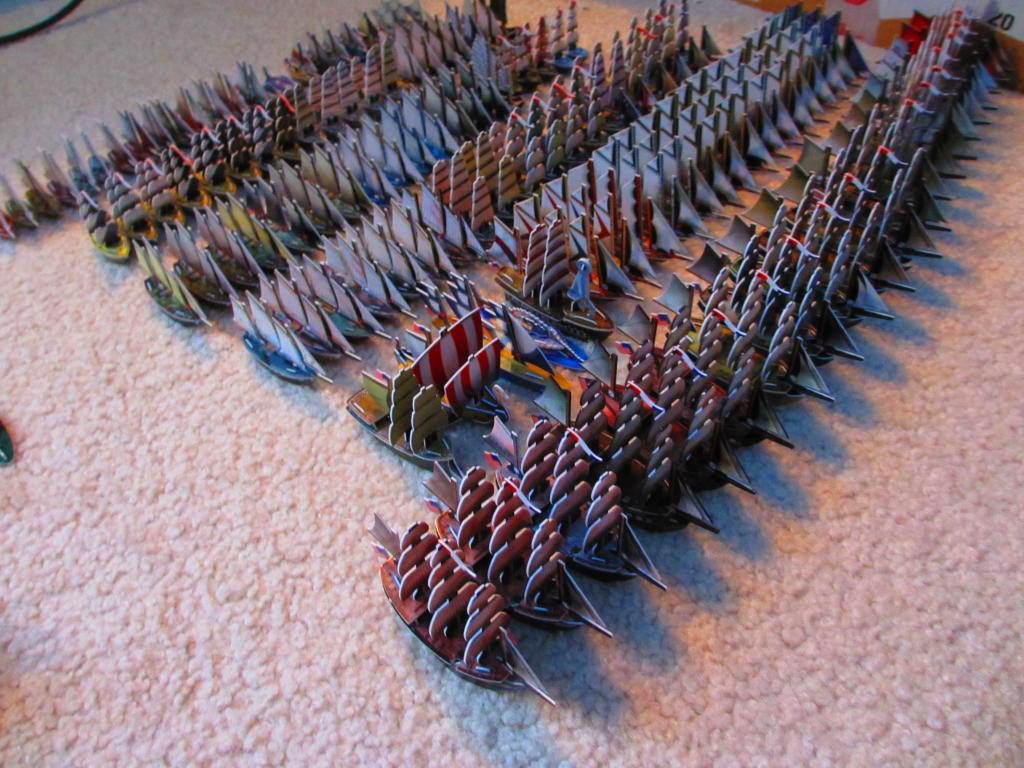 The Americans are here!

The Cursed are one of the hardest factions to play.  Their ships are typically slow and expensive with large cargo holds.  Speed is huge in Pirates CSG, and the Cursed have a need for speed.  There are some exceptions, but most of their ships struggle to keep up with the gold ships from other factions.  The Cursed are one of the most interesting factions when you consider all of their sea monsters, some of which are quite playable and a lot of which are not.  They also possess a high number of expensive and devastating named crew, although most of them are better used in higher point games (80+) than the standard 40 point format. 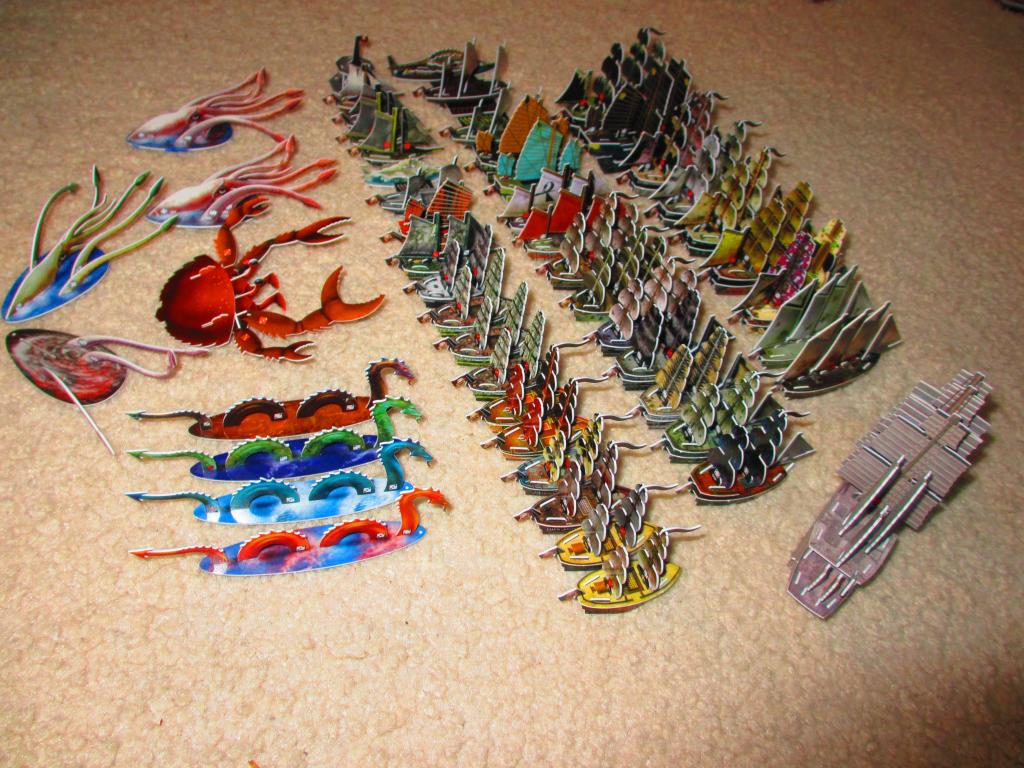 The Cursed have the most sea creatures of any faction.

The Barbary Corsairs were only featured in one set (BC), but it was a grand opening as they received no less than 38 ships in that set alone, partly because BC was the only set that didn’t feature the Pirate faction.  The Corsairs are the best of the “minor factions”, with a lot of great gold ships and a fair number of solid support ships that can fight adequately. 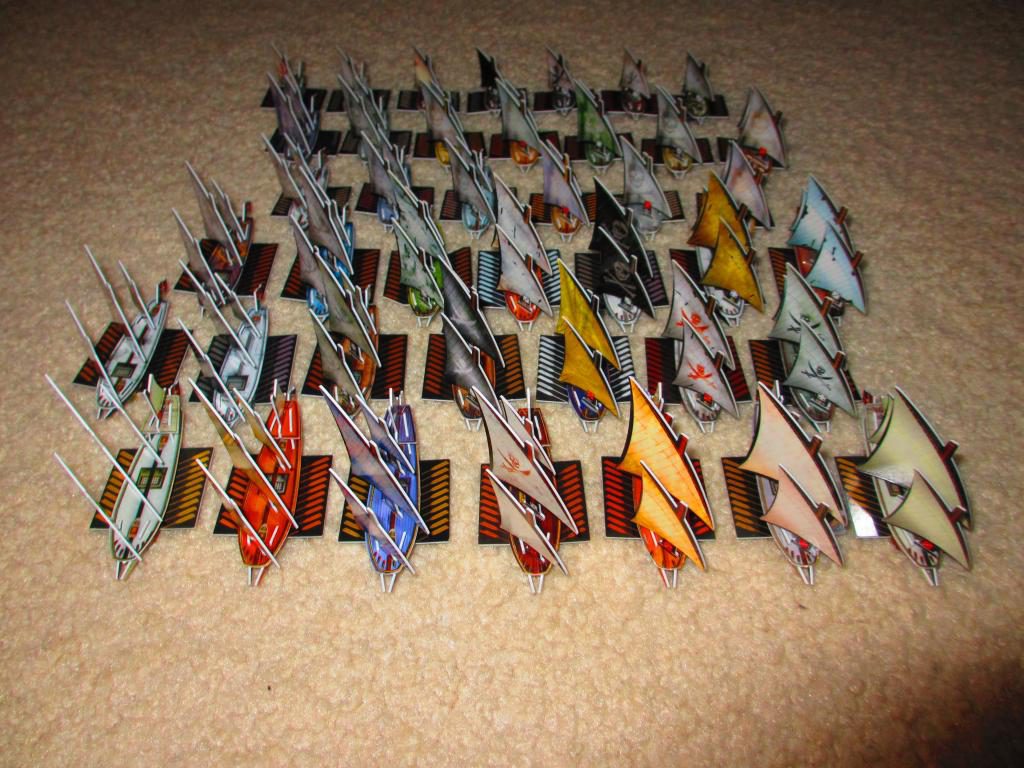 The Corsairs’ only ship type is the galley.

The Jade Rebellion was the feature faction in the South China Seas set, much like the Corsairs in Barbary Coast.  They’re better at fighting than running gold, but they’re solid at both.  They don’t have a high quantity of ships, but fortunately they make up for it with high quality ships and without doubt the best set of named crew of any minor faction. 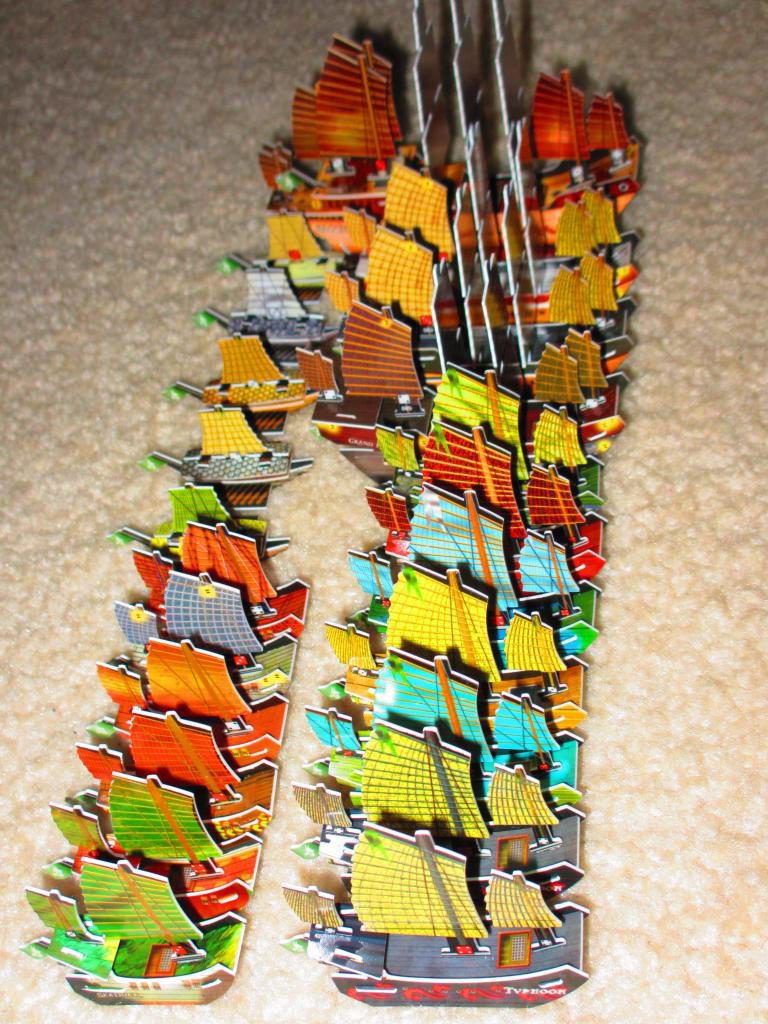 The Jades are colorful and beautiful!

The Vikings were only present in the Frozen North set, and they’re almost exclusively a brawler, with many slow ships and the powerful Longship keyword, which gives you two shots per mast instead of one.  The Vikings suffer from slow speeds, small ships (nothing bigger than 3 masts), and a lack of good named crew.  They are still a dangerous foe, but not the biggest threat to win the game. 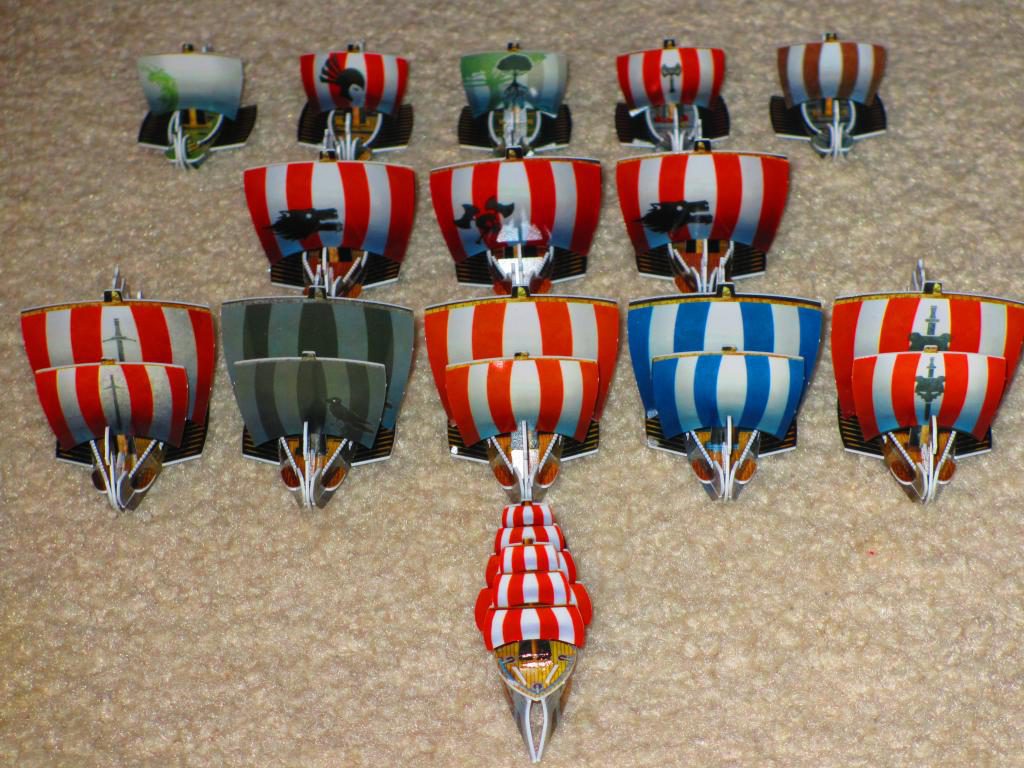 The Vikings with their longships.

The Mercenaries (or Mercs, mostly present in the Mysterious Islands set) are the least playable faction in Pirates.  The Mercenary keyword prevents a ship from docking at its own home island (HI), which severely cripples their gold game.  At least one canceller is needed to make a pure-Mercenary fleet viable, unless you use one of the two ten masters that came out in Savage Shores.  These huge ships have the Dories keyword, letting them unload cargo if they’re within S of their home island.  Beyond their flaws, the Mercenaries are an average faction with a fair share of solid gunships and interesting named crew. 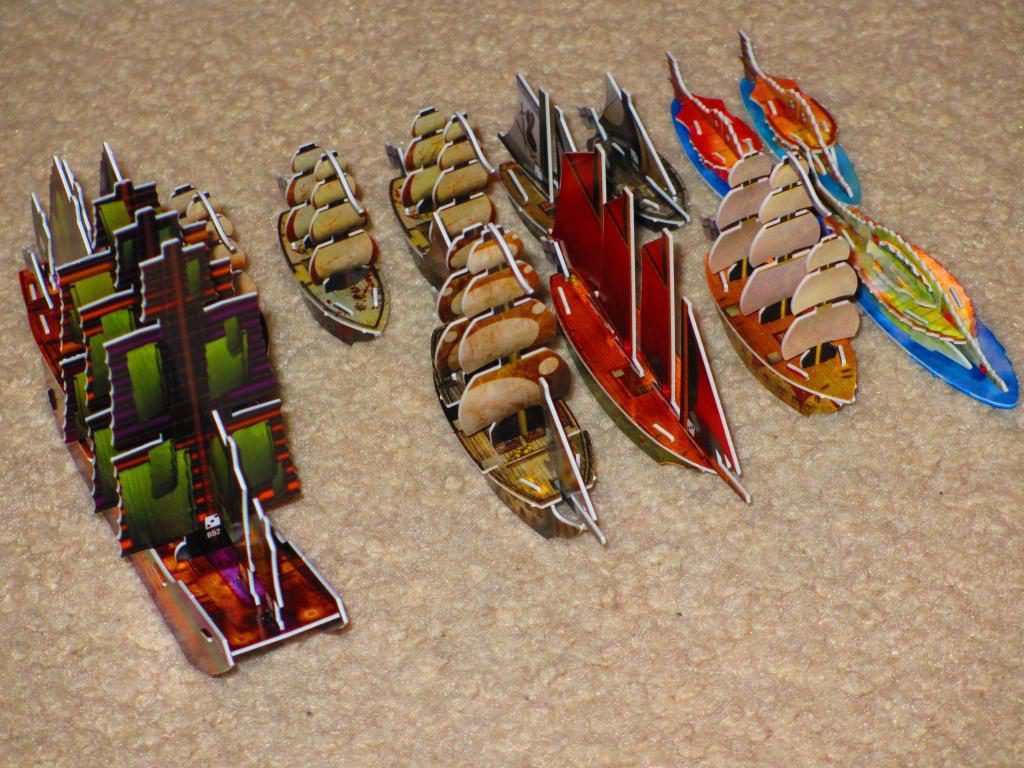 The Mercenaries are arguably the most unique faction.