Played another game on VASSAL with repkosai! You can check out the video if you’d like.

I went first with a recent fleet of mine. To fill out the last 5 points I added the Paradox with an explorer.

Calypso was successful on the first turn, and the Paradox used a trade current to reach the first whirlpool and pop out of the second near the southwestern wild island. The Akua Lapu didn’t want to risk a lot of masts or crew via whirlpools, and needed to wait in order to use Grim’s ability, so she wasn’t in a hurry to do anything for the first part of the game. I must admit that the 5 extra points helped, since it allowed me to have a dedicated gold runner. The Paradox is very slow without a helmsman, but between trade currents and the whirlpools being placed close to wild islands, she wouldn’t need a lot of speed to move all over the map. 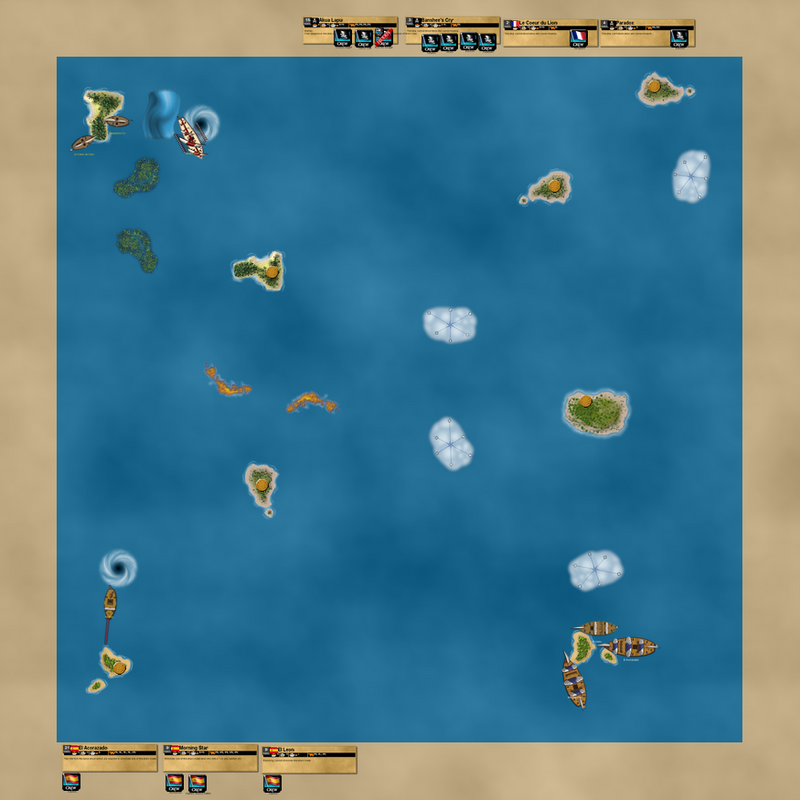 The Spanish set out, and the Paradox has an eventful trip already. She found an abandoned helmsman in the south, but also Barrel o’ Monkeys and a 6 coin. The monkeys took the 6 for themselves, which left the Paradox with no gold. Thus, she used another of Calypso’s whirlpools to emerge near another wild island, losing a mast in the process. 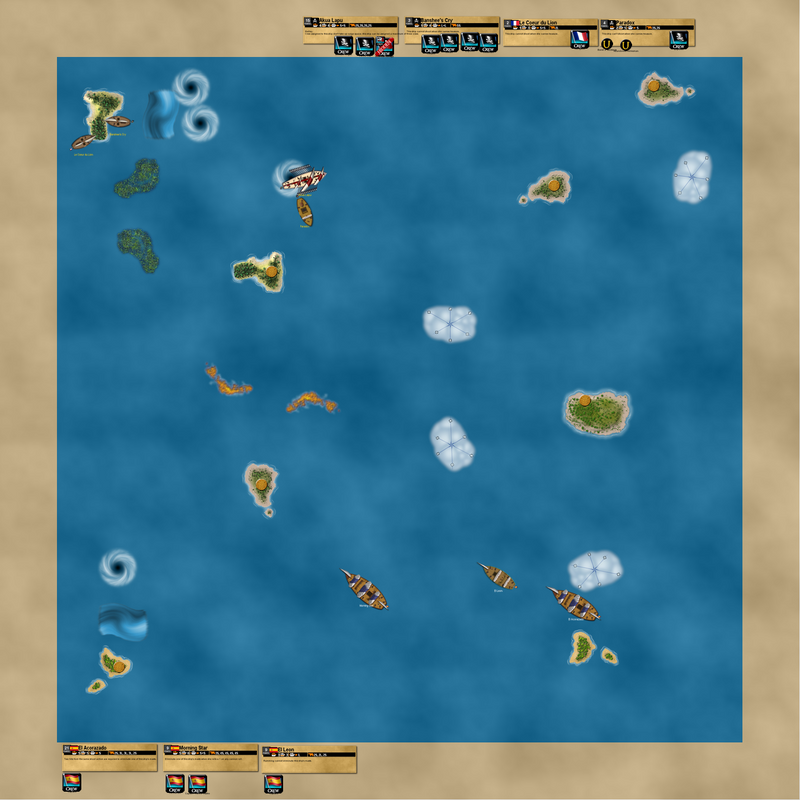 Risking negative UT’s, the bored Akua Lapu looks to explore in the northeast. The Paradox gets 3 coins from an island but one will be left behind due to the greedy monkeys.

Here, the Morning Star has emptied an island for the Spanish, while their gunships head northwest towards the Pirates. The Paradox unloads, while the Akua Lapu loads up 3 coins. 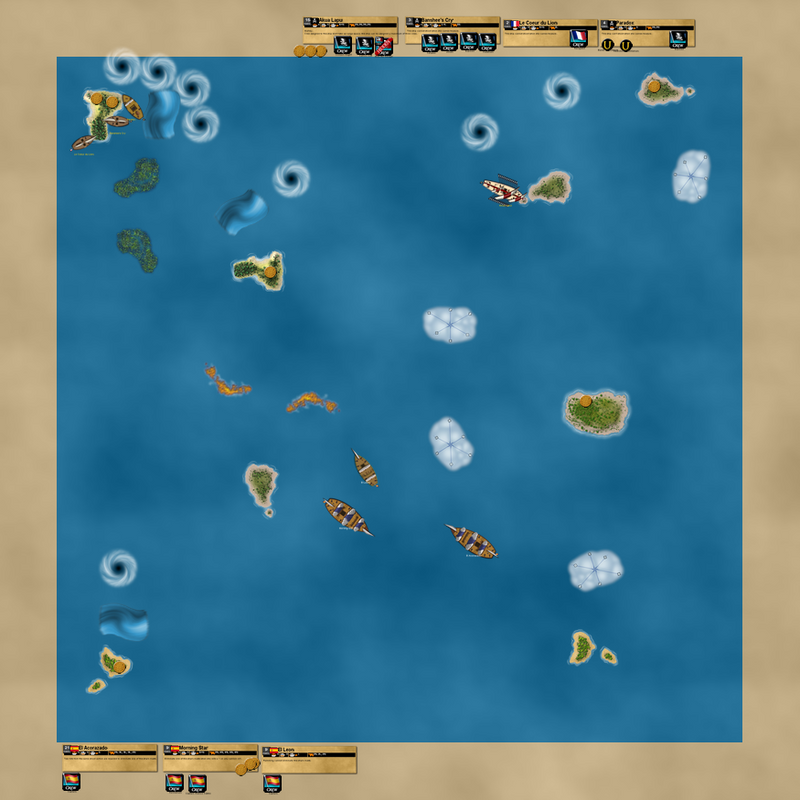 The AL gets the SAT from Calico Cat, allowing the AL to dock home for a Pirate windfall! You can see the strange situation around the Pirate HI, with two sargasso seas, a bunch of whirlpools, and a few trade currents, all near a corner of the map. 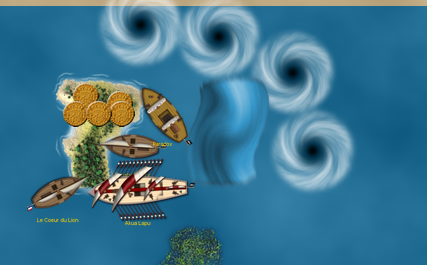 Much excitement! After some rules issues, the Paradox is forced south from using some faulty Bad Maps! However, the Spanish weren’t completely fortunate: Calypso finally rolled to place another whirlpool, and luckily for me Calico Cat also rolled successfully. The Akua Lapu took off for the Spanish home island! 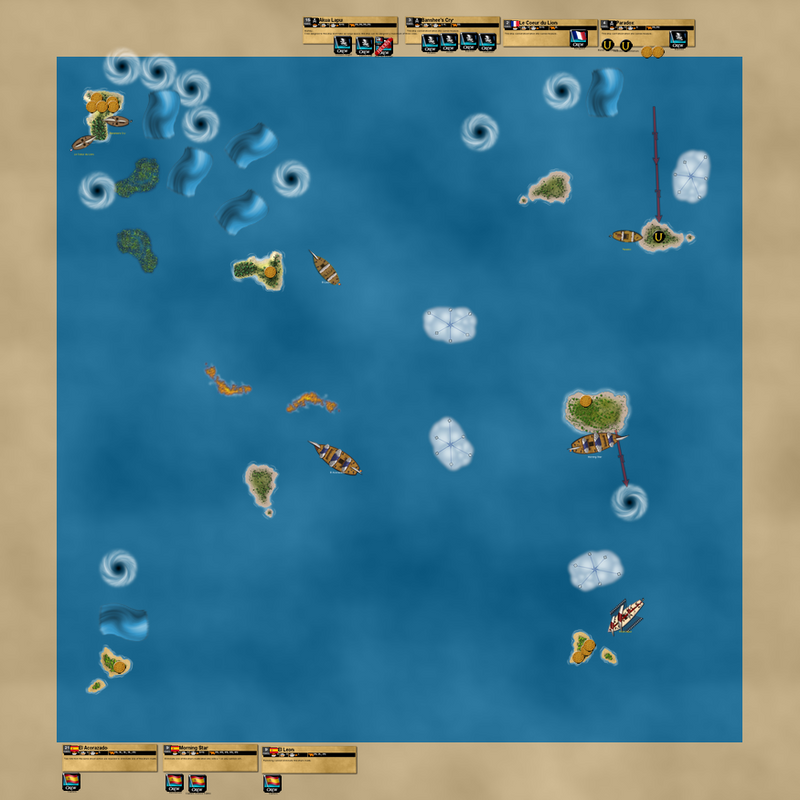 Grim the Savage led a raiding party, and the Pirates took all of the Spanish loot!! The gimmick was complete, though the AL still had to make it home in one piece and unload the gold. Speaking of unloading gold, the Paradox did just that, further increasing the Spanish treasure deficit. At this point everything in my fleet was working perfectly, as even the slow Paradox was turned into an awesome gold runner between the whirlpools and her explorer. 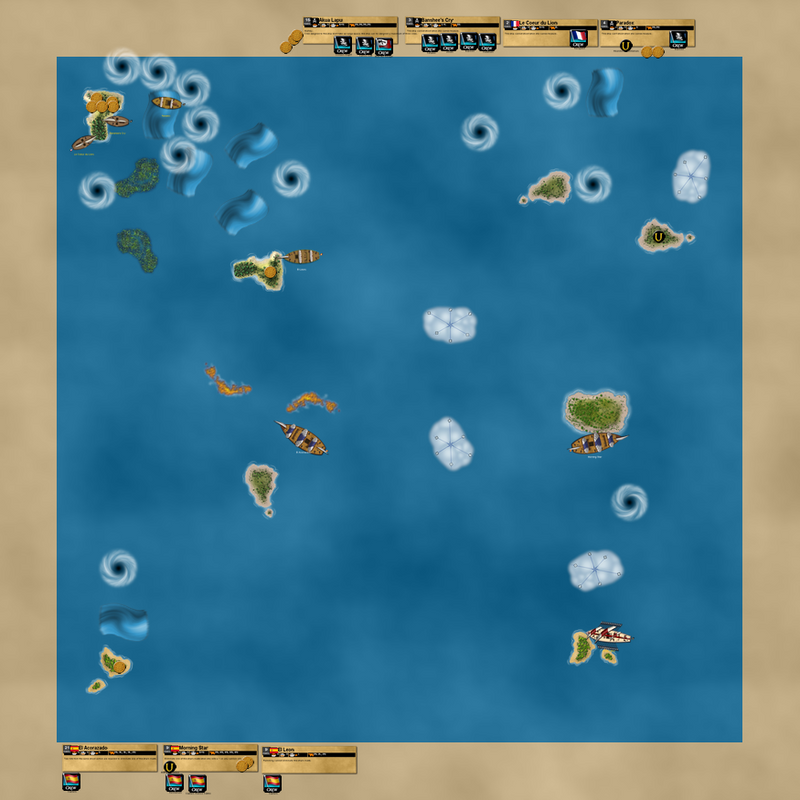 Calypso placed another whirlpool, allowing the AL to scoot around the fog bank and be whisked back to friendly waters. The Morning Star unloaded another island worth of gold, and the Leon was approaching the Pirate home island and managed to hit the AL. 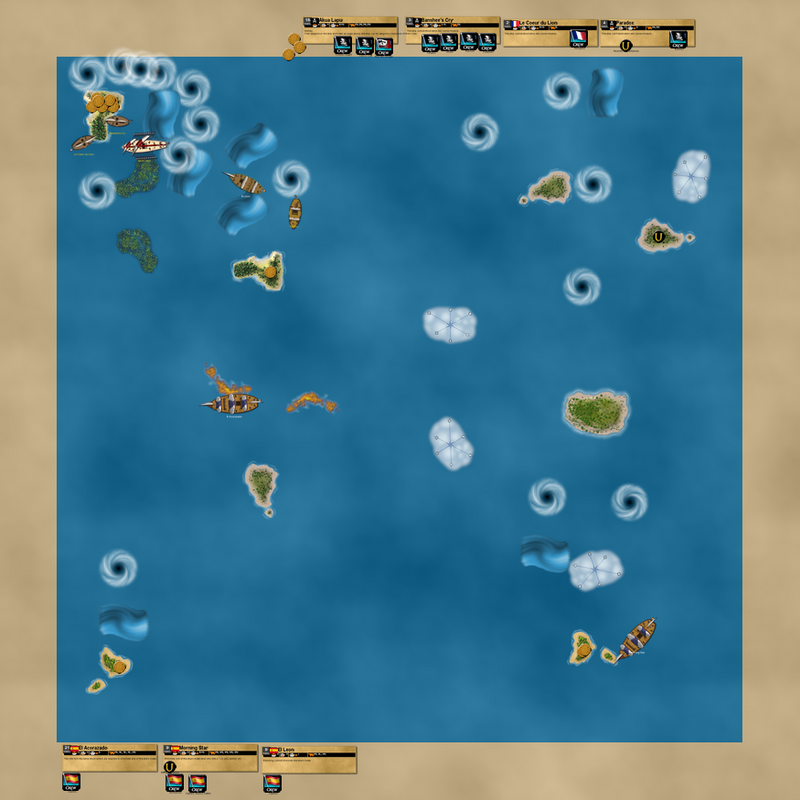 Another windfall! The Akua Lapu docks home the stolen gold, and the game was turning into a blowout. I decided I had enough whirlpools and trade currents to execute any late-game strategies and maneuvers I might need, so the Coeur and Banshee’s Cry got to do some sight-seeing. 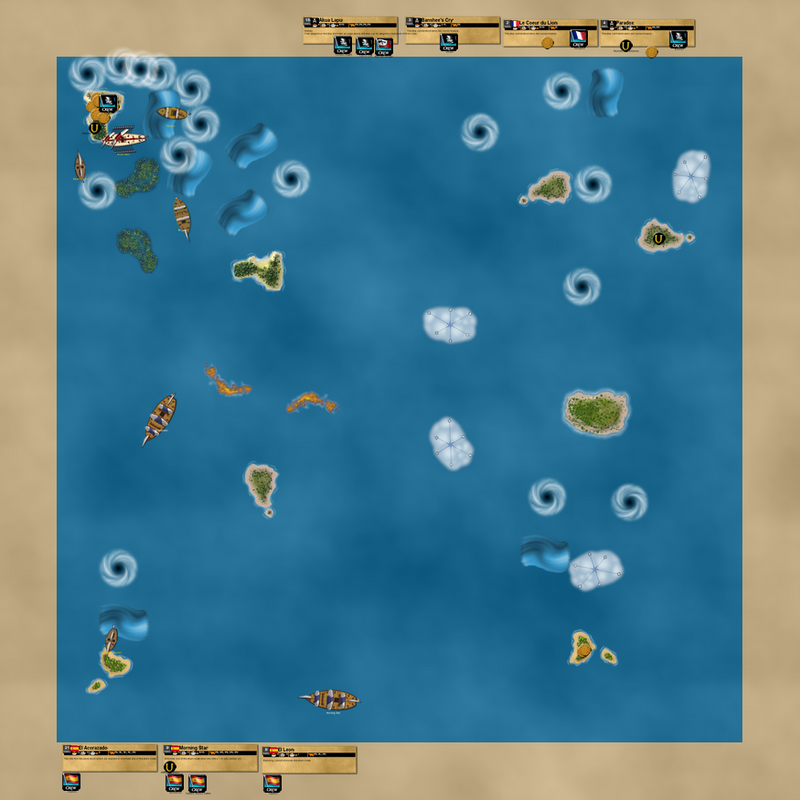 However, the Morning Star would have none of it! She rammed the Coeur out of action and stole the 6 that the monkeys had originally stolen from the Paradox. The Leon arrived through a whirlpool, but the attack naturally triggered a Pirate response, with the Paradox and Akua Lapu arriving shortly thereafter. In hindsight, the AL could have just raided the unprotected Spanish home island a second time, but instead there was some fun combat. 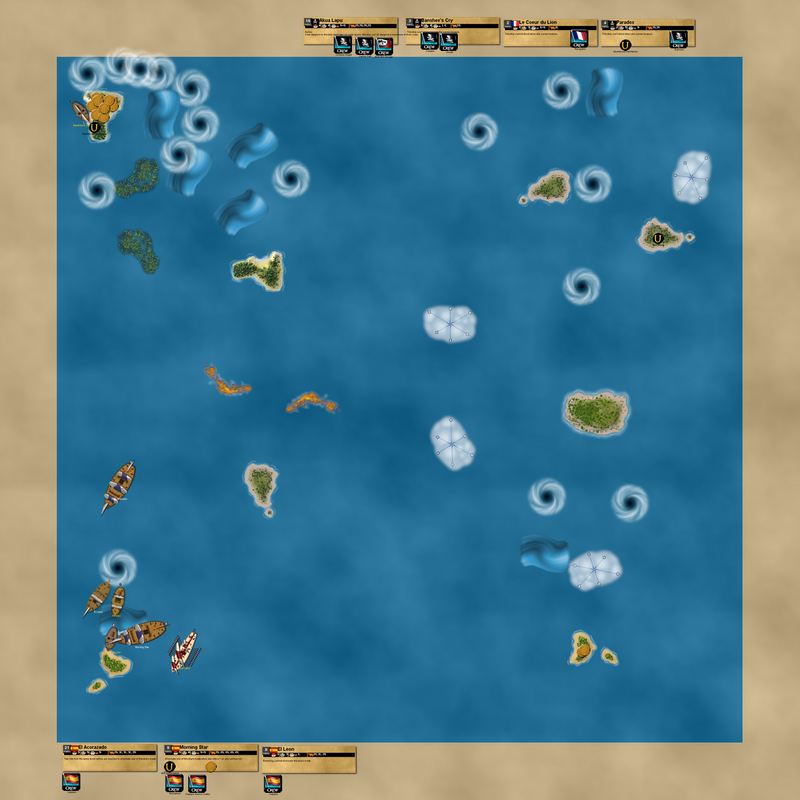 Disaster for the Spanish! The Leon sank the Coeur, but the Morning Star boarded the Paradox (when she had 3 masts remaining after the AL shot off 2 of them) and lost the 6 coin! The Paradox took full advantage, speeding away through the whirlpool. The AL got another SAT from Cat and blasted two masts off the MS before turning east in anticipation of another HI raid! 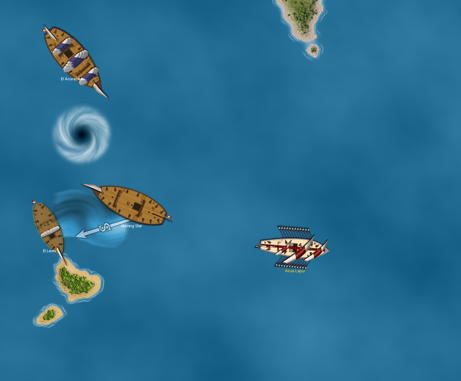 The MS and Leon exchange crew so the Leon has Castro, captain, and helmsman. The Paradox docks home the 6 coin she originally found on the second turn, while the Banshee’s Cry prepared to sacrifice herself to defend the AL. 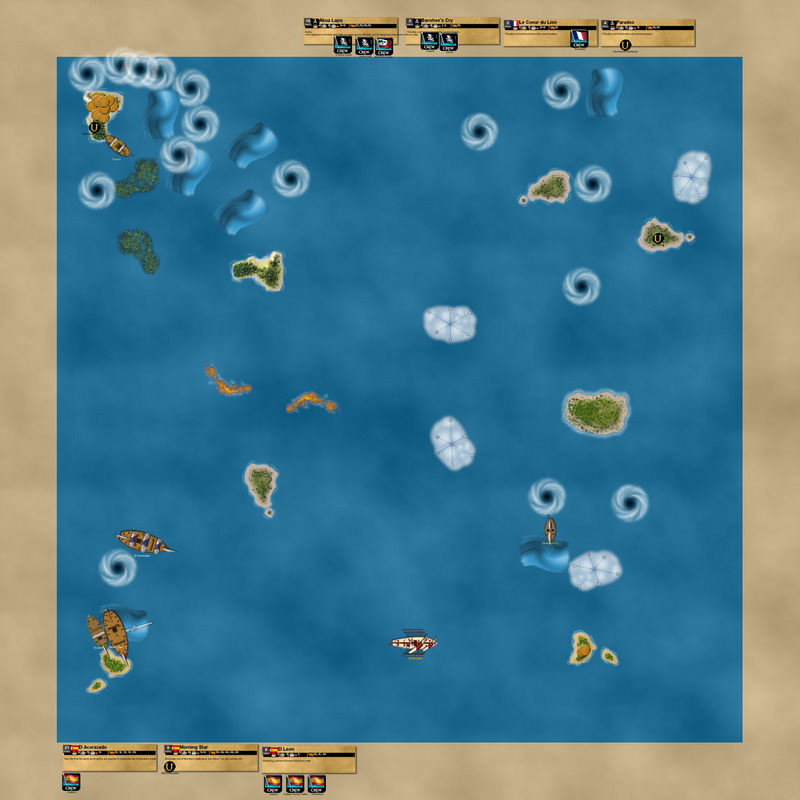 Race for the Spanish home island! The Leon gets an SAT from Castro, but now the Paradox is ready to assist the AL too.

The AL raided the Spanish home island of the last two coins in the game, but Castro got an SAT to allow the Leon to shoot twice. Furthering Spanish woes, both shots missed, which allowed the AL to escape via whirlpool after yet another SAT from Cat. The Pirates had escaped, and more gold was unloaded to end the game! 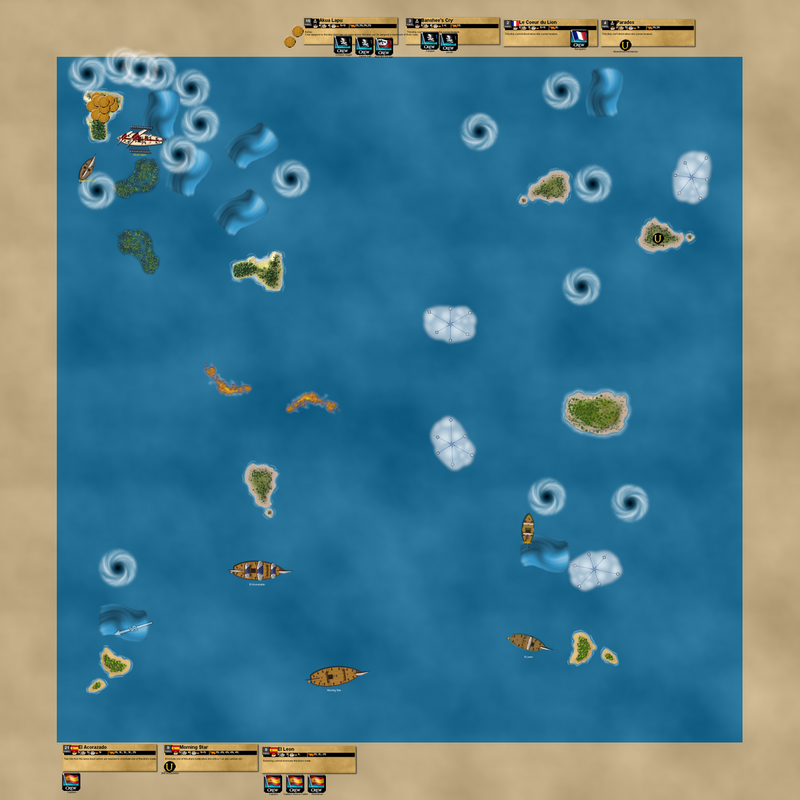 In a huge blowout, the Pirates defeat the Spanish 55-0! This is one of the only games I’ve ever played where a fleet gets every single coin in the treasure distribution. No gold was sunk, and the Pirates collected and stole the rest for a massive victory. This game made me want to use Calypso more, and it’s also one of the best gimmick games/fleets I’ve seen.

We both learned a lot from this game: I learned how effective Calypso can be by not always needing helmsmen on slower gold runners, as the Paradox was just as valuable a ship as the Akua Lapu. Repkosai learned the opposite – speed wins games, as the Acorazado was way too slow to have any impact on the game. We also learned some rules situations; though I was surprised by the answers and we played them wrong, it wouldn’t have affected the final outcome since the Pirates were so dominant in this game. Thanks for reading! More adventures await!