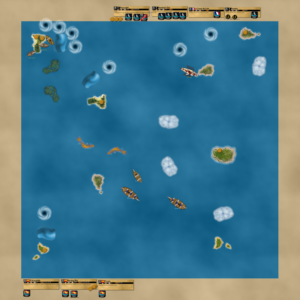 Playing the fleet on the VASSAL module!

Here’s a gimmicky combo that would probably work better as a piece of a larger fleet than a standalone 45 point fleet.

Banshee’s Cry creates a whirlpool with Calypso. Based on standard island placement, you should be able to place the whirlpool near your opponent’s HI by placing the edge L away from the wild island nearest their HI. The Akua Lapu gets an SAT from Calico Cat, and proceeds to go through the whirlpool. Her S+S speed should allow you to raid the enemy HI if the whirlpool is place correctly. Unfortunately the Akua Lapu’s ability and the Pirate lack of a 0LR reroller prevent making Cat’s SAT easier to get. Since no crew take up cargo space, the AL can raid a huge load at once, and then get right back out of there. Get the gold back home and maybe go out for another robbery! The AL has enough firepower to hopefully defend the BC and Calypso if an opponent follows you through, but at that point you might not need her. In a multiplayer game this could definitely be amusing if you managed to use Calypso to rob 2 or more players, but the backlash would likely eliminate this fleet quickly lol.

This fleet actually has some backup options. The Coeur helps the AL move faster; I originally had Hammersmith aboard but the double action is more important when dealing with whirlpools, and because the whirlpools will be close enough for the AL’s base move to dock. While the enemy collects gold the AL can do the same, harass enemy gold runners, etc. It’s perfectly reasonable to have the BC’s crew sit at home while she does a gold run. I nearly added Hidden Cove but I don’t like events and think should not have ever existed, so I decided not to take the easy way out, instead adding an explorer and oarsman to the BC. In any emergency situation, the BC can dump Calypso and go get some gold, with the Coeur helping her or doing the same.

This is pretty gimmicky, and wouldn’t be likely to win many games. Mostly just a fun and effective use of the niche combo created by Calypso, HI raiding, and the AL’s one-of-a-kind ability. Feel free to comment and/or vote.

Check out this battle report to see how the fleet did!

Check out this video to see how the fleet performed!