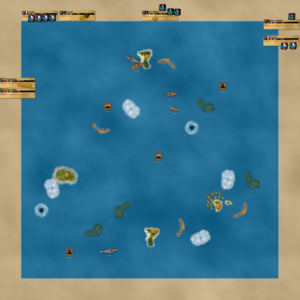 The fleet in action on the VASSAL module in 2017.

20 points isn’t a build total you see often, but after neglecting to arm the Libellule in my “New Age of Armed Merchantmen” fleet, I actually thought up a decent combo.

Ability: Captain. Once per turn before you give this ship an action, roll a d6. On a 5 or 6, this ship can be given the same action twice.

Flavor: Suspicious and not very welcoming of the newcomers to her ocean-bound land, Lady Roimata has made overtures towards France for the benefit of her people. French cannons may be put to even better use against neighboring islands.

Here we have a strangely potent ship at a tiny build limit. The Libellule has SAT with reroll, and therefore can move S+L+S twice with up to six 4L shots. With Godiva’s link she still has 3 cargo spaces open for gold and can pick up coins quickly with the explorer, while the Windcatcher keyword can help her get home faster. Toss in a backup gold runner at L+L speed, and you’ve got a solid shot at winning unless you get nasty UT’s. With the low point limit and extreme speed, it’s likely you’ll get the very nice UT’s before your opponent.