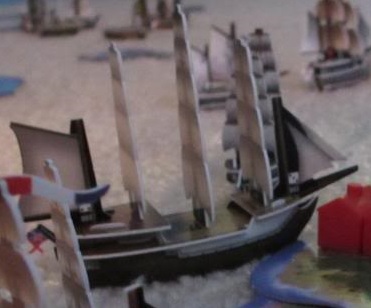 I’ve always believed that 5 masters are underrated as potential hybrids or even as gold runners. Many have as many cargo spaces as they have masts, and therefore you’d have 3 spaces open even after adding a captain and helmsman. This fleet takes that idea to a higher level, using as little crew as possible to make “armed merchants” capable of getting gold, defending it from hostile pirates and other nations, and being durable enough that even if their guns don’t tell against more accurate opponents, they still have a chance to return home intact.

The Aberdeen Baron is the most exemplary ship that fits the theme. After Gold comes aboard (the girl, not the treasure – did I trick you?

), she’ll have all 3 basic abilities at her disposal.

The Morning Star is the slowest of the trio and could get into trouble between the presence of a Ransom crew and her self-sabotaging ability. However, this fleet wouldn’t be complete without her, and she’s a great value for the points.

The Santa Isabel’s cannons are almost too good for her “merchant” role, but her ability and flavor text find her a fit in this fleet. You could swap Amore and the explorer for potentially increased protection.

I wanted to involve the French somehow to complete the triumvirate of imperial superpowers, but arming the Libellule seems pointless and I wanted ships with 4+ masts with at least 6 cargo.

The hope is that Amore’s “amor” can distract Zuan from harming HGold in case the latter can’t resist her piratical urges. (Yes, Thomas Gunn would be more convenient, but he’s off fighting the French again)

Thanks for looking at the fleet!  Let me know what you think of the “New Age of Armed Merchantmen”!