Another game was played between A7XfanBen and JohnLock.

I went first with The Jades can use Calypso too! JohnLock followed with a Pirate fleet comprising some of the best ships in the game, including the Banshee’s Cry and Hai Peng.

Once again we had 10 wild islands with 3 coins apiece, and flat earth rules. 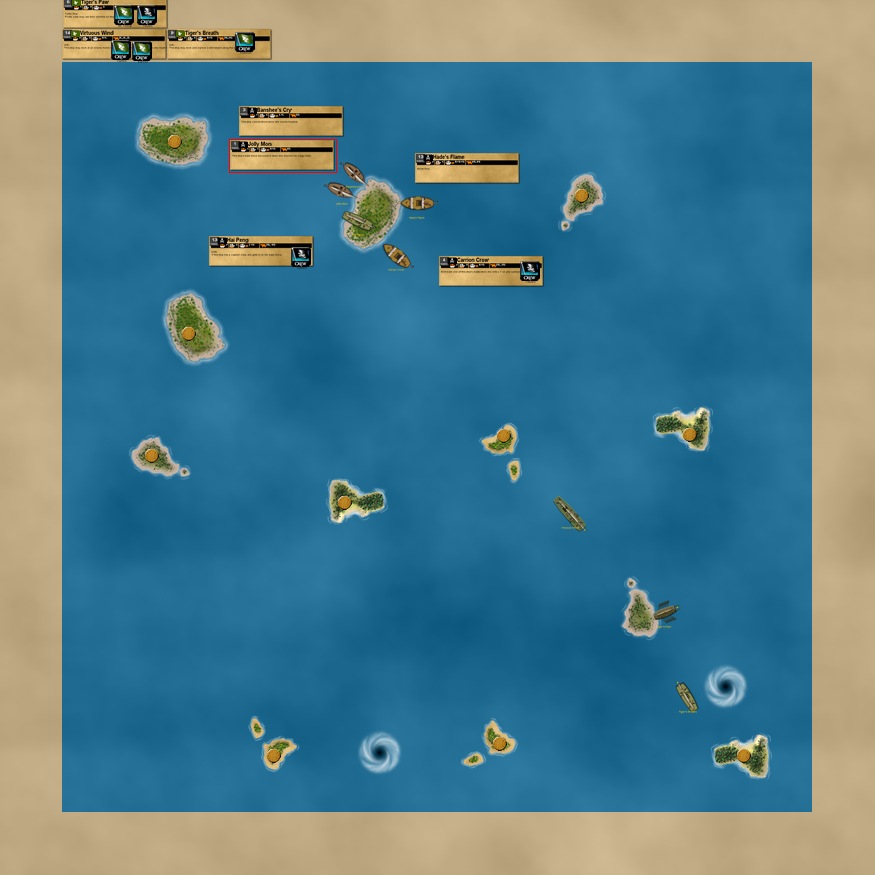 The Pirates took off for 4 different islands, but the Virtuous Wind had already scoured one of them. I purposely went for islands farther from home, knowing I could probably get close gold later. Calypso got into action early, allowing the Tiger’s Breath to explore an island in the south that would have taken longer to get to. 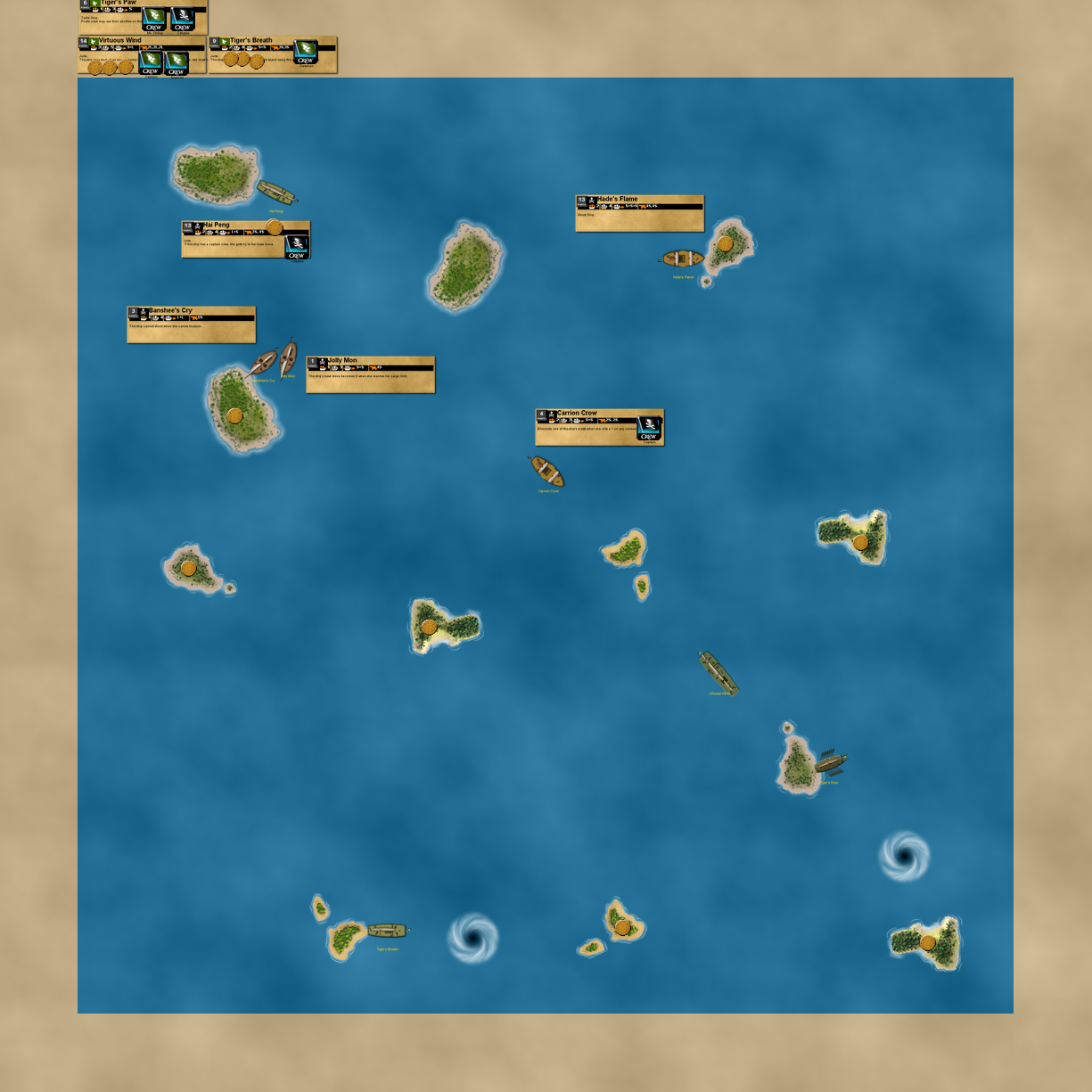 Here I wanted to try raiding the Pirate home island, but Calypso and Cheng couldn’t come up with a whirlpool in the north. The Virtuous Wind instead headed northeast. 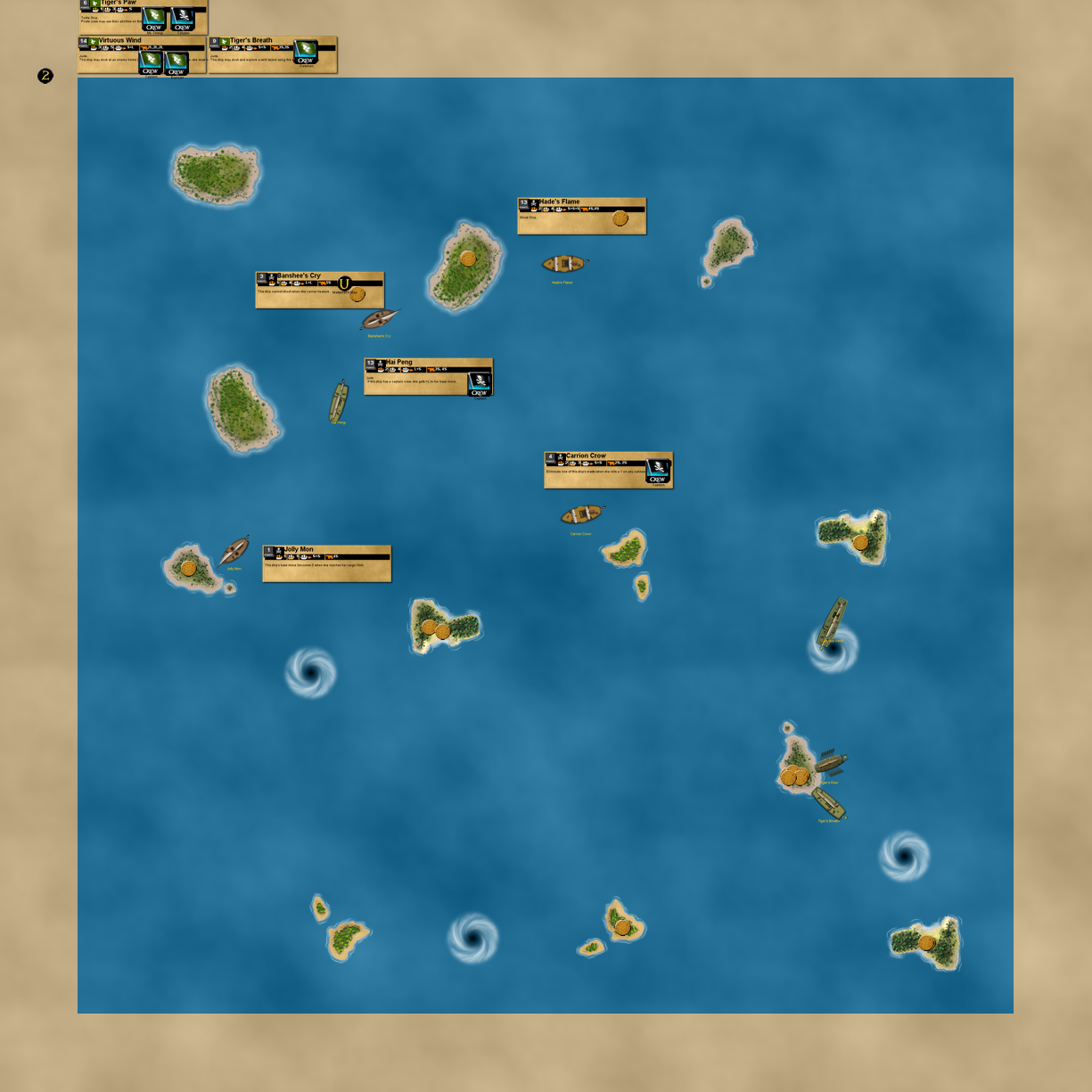 Seeing both Pirate gunships (Hai Peng and Carrion Crow carried captains) away from the Pirate HI, I decided it was time for the VW’s raid. Throughout this game, both of us had dismal luck with whirlpool travel, and Protection from Davy Jones wasn’t found until the end. 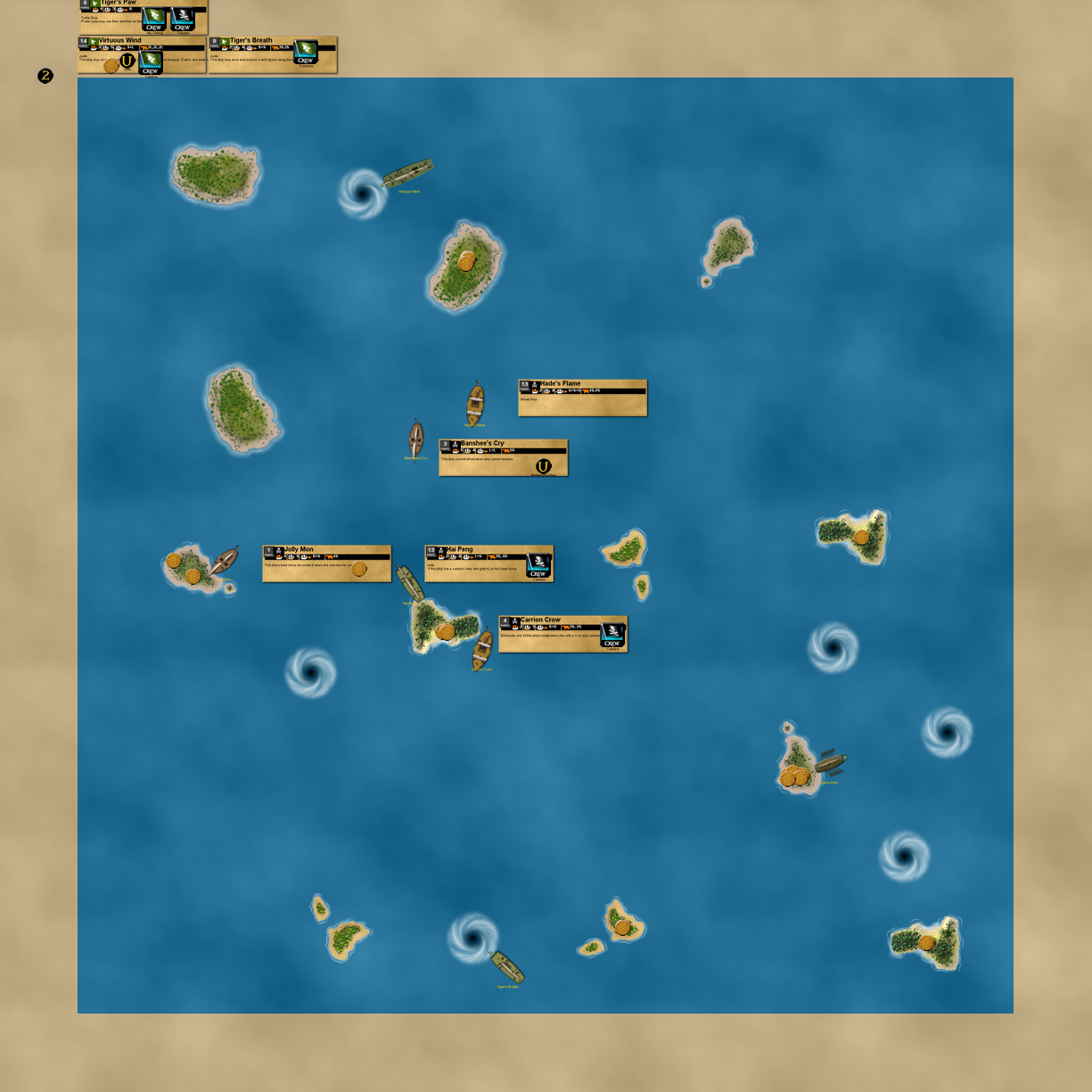 Having found the Jade UT earlier, I was taking a big risk going to the Pirate HI instead of just going home with the 7 the VW had. Risking both the UT and the 7, the VW only robbed a 1 coin. 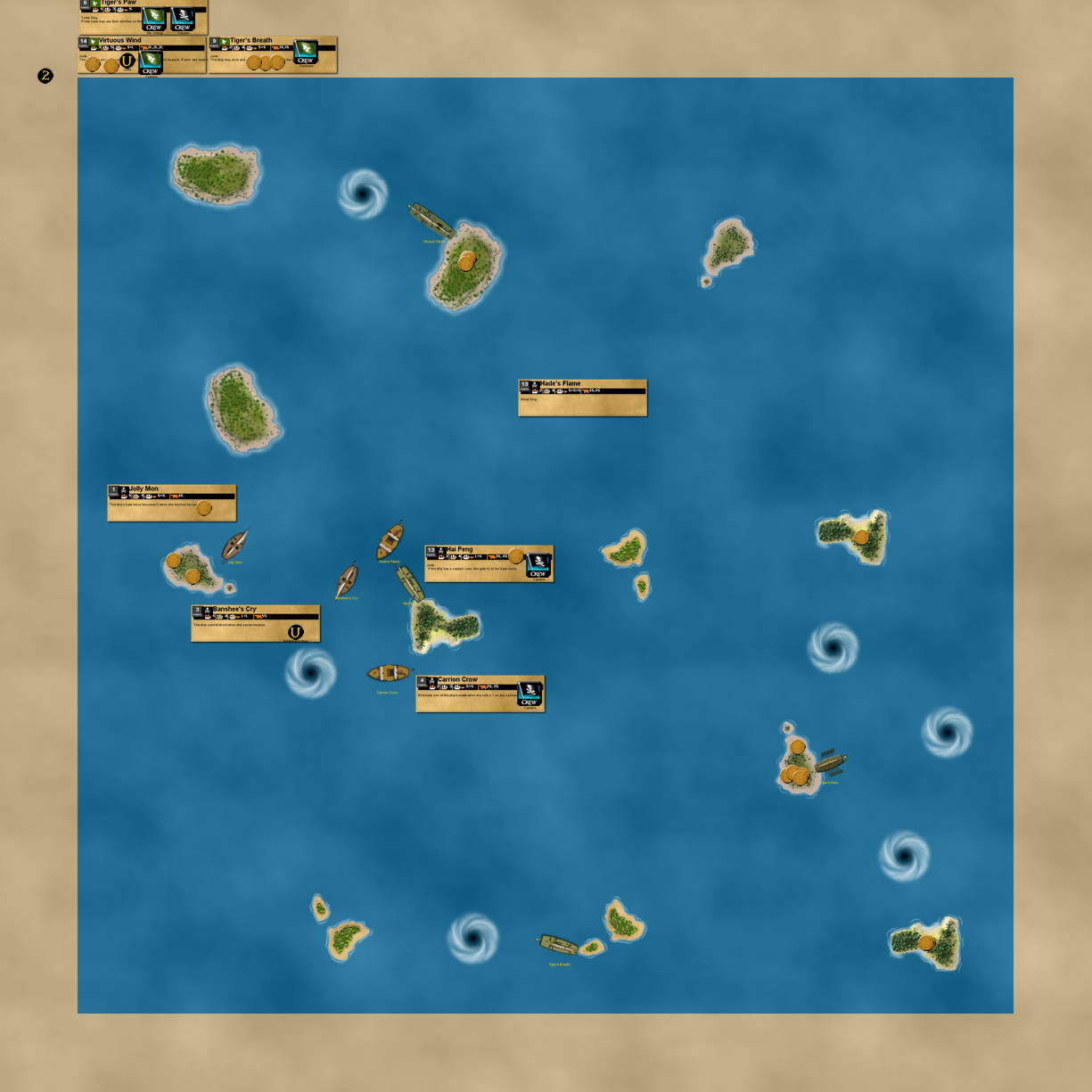 Though the Pirate brigade did turn for their robbed home island afterwards, I decided to “ride out and meet them”.

The Hai Peng had 3 coins aboard, and I figured the VW could win the fight. The Hades’ Flame and Carrion Crow have warped to the southeast, losing masts. 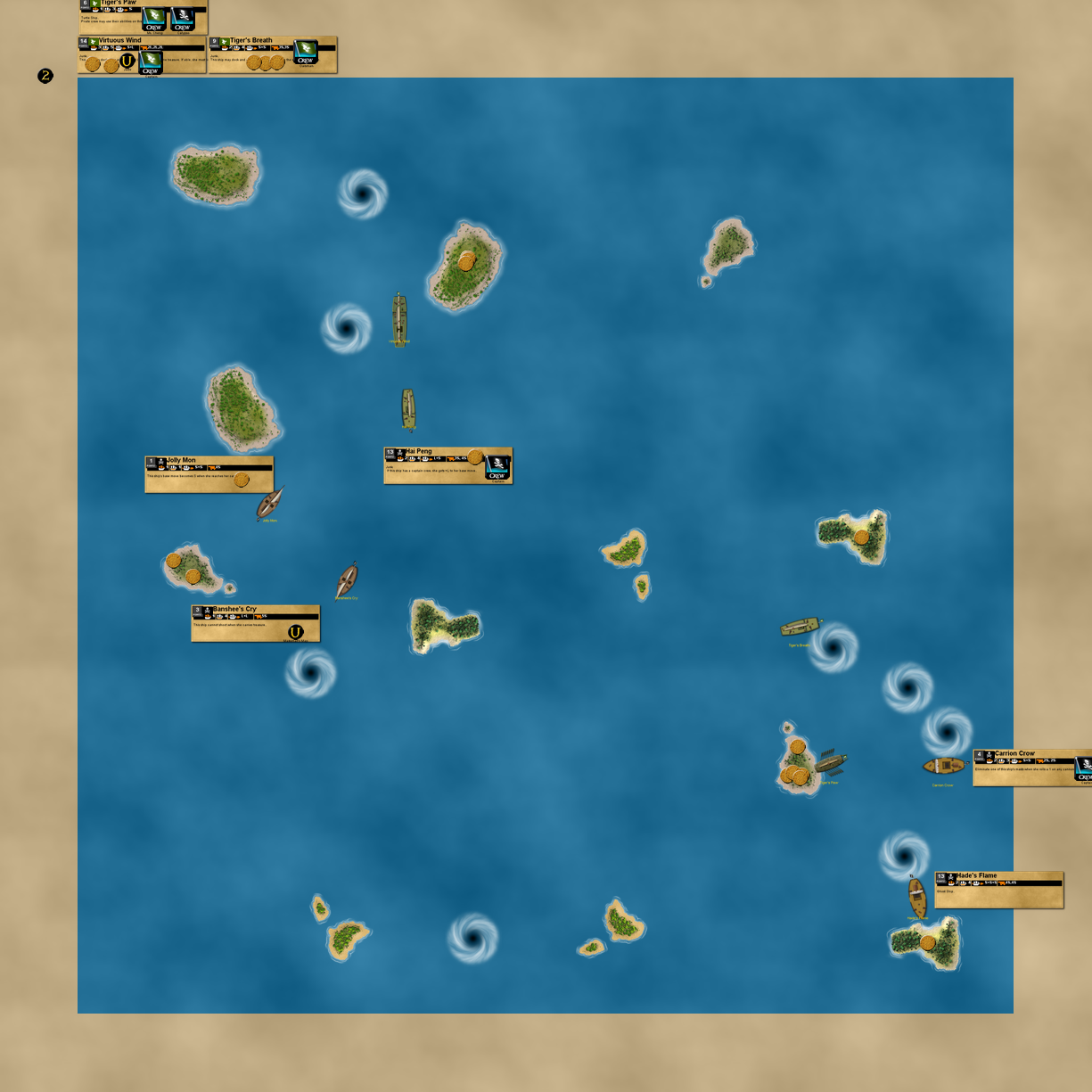 The Hai Peng rammed the VW instead of docking at the home island, taking off a mast but being dismasted in return by the Wind. This was my golden opportunity to cash in and tow the HP home for a bunch of gold. 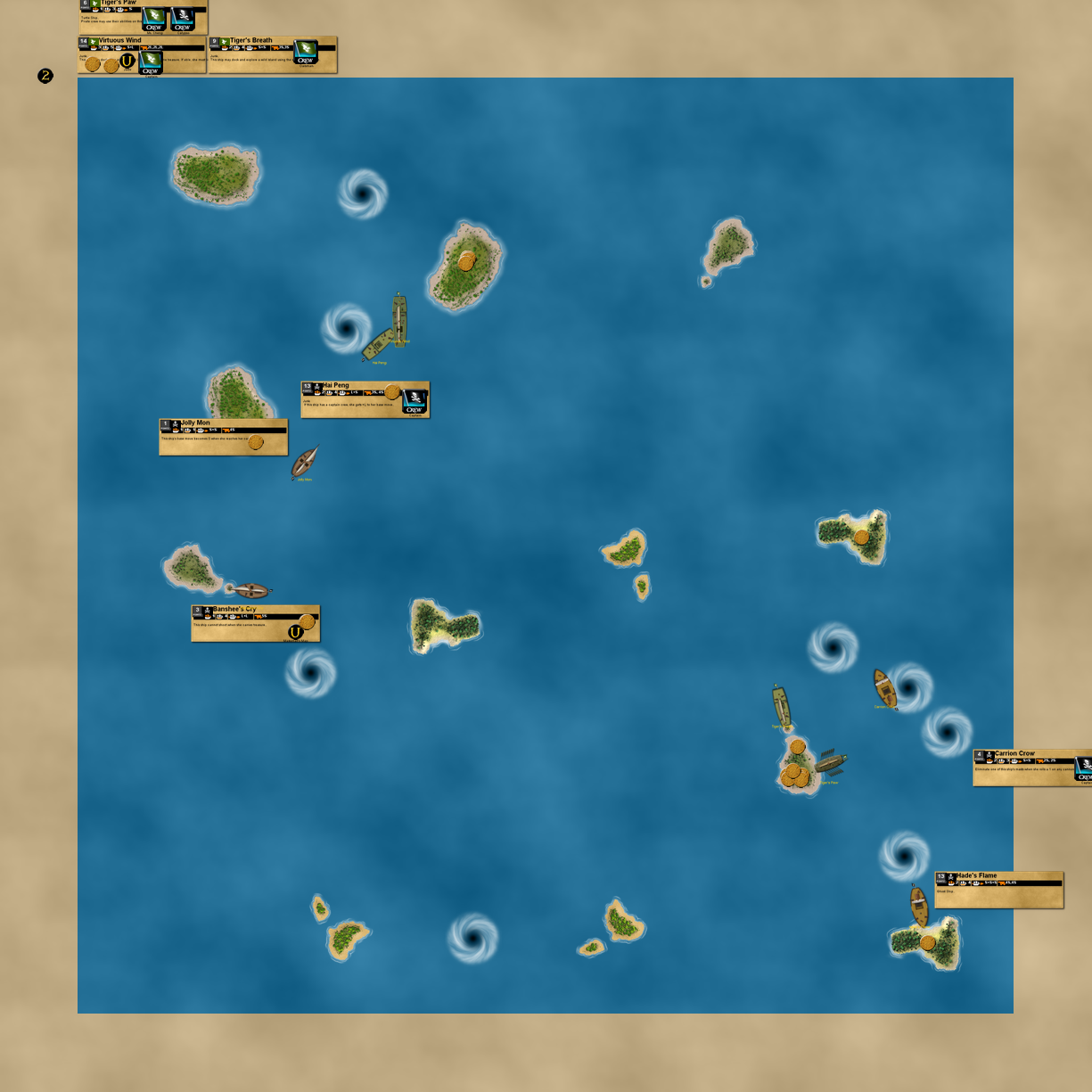 Using a little-known rule, from Page 10 of the Reference Diagrams I confirmed that I could capture and tow the Hai Peng with the Virtuous Wind since the HP was derelict and her bow was already in contact with the VW. The VW moved S to enter a new whirlpool Calypso had created (Clutch Calypso! XD), warping back to the Jade HI in a jiffy! 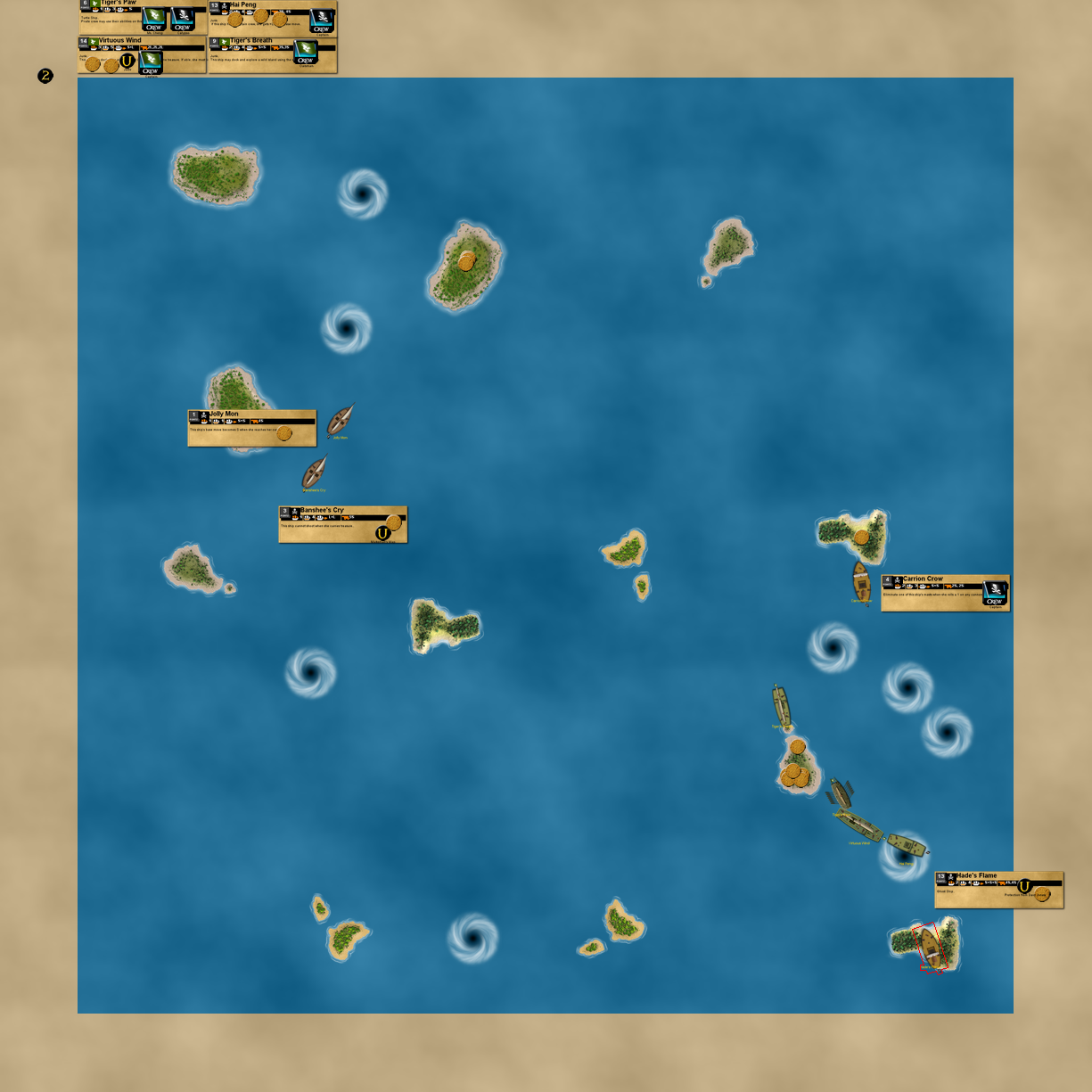 Both fleets maxed out their gold scores at the end, specifically the Jades with you guessed it, Jade. XD The VW used the UT to double her old 7 coin into 14 gold after the Tiger’s Paw took the stolen 1. The TP then gave the 1 back to let the VW double that coin too. Good thing, since unfortunately I would need it…. 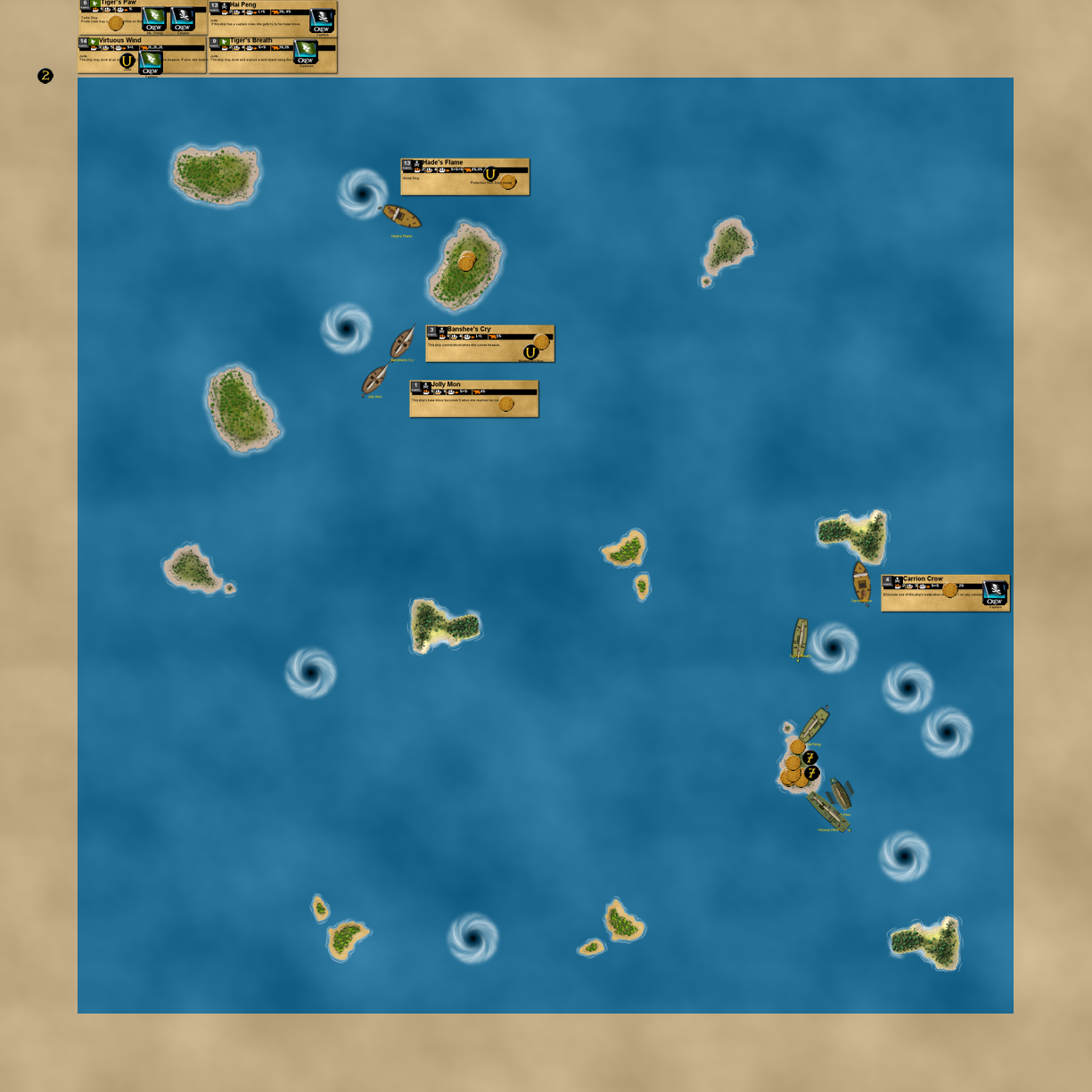 The Jades won on both tiebreakers: they led the Pirates in points in play (my favorite tiebreaker, and something that should have been a standard rule) 55-21, and led in masts standing 7-5. 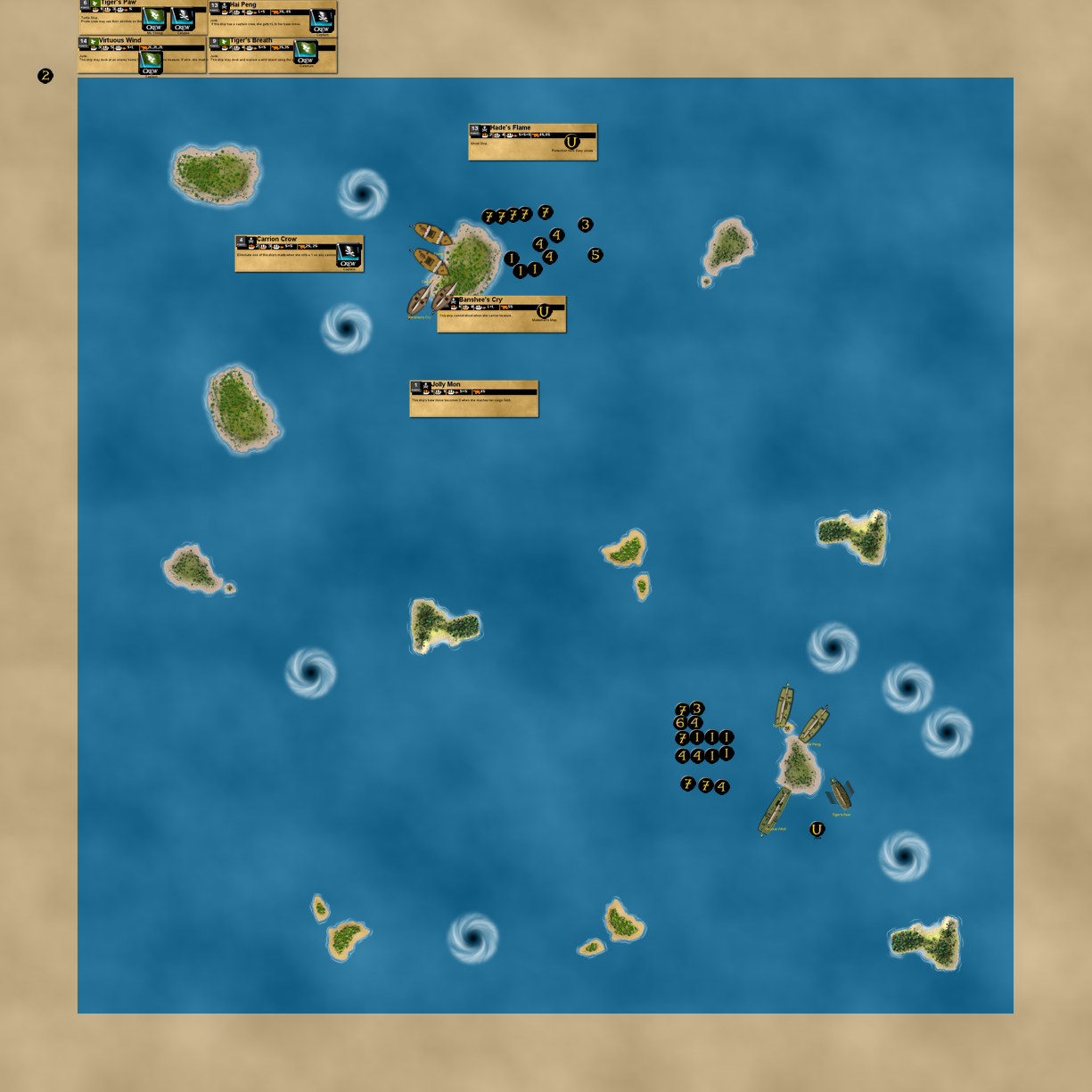 I’m very happy with how my new fleet performed in its first game, essentially winning against a fleet using some of the best Pirate ships out there. We both made some mistakes; the Hai Peng ramming the Virtuous Wind instead of docking home her gold led to the Jades capturing the infamous junk, while I should have been more conservative actually, since going for the HI raid only resulted in 1 more gold. If the VW had been successful in doubling both the 7 and the 4 from the island northeast of the Jade HI (Carrion Crow eventually got the 4 for the Pirates), the Jade profit would have been 22 instead of 15. However, then I probably wouldn’t have captured the HP, who netted 12 gold from her 3 coins. So many moments, decisions, and strategic moves that matter in the end – one of the reasons I love Pirates so much!

Overall though, a very fun, close, and strategic game that came down to the… rope? XD See you next time!!