This was the VASSAL introduction game for captainjohnlock! (JohnLock on VASSAL)

He went first with an English fleet, I followed with the French. We used a 40 point build total with no crew to keep it simple. Flat earth rules, and with 3 coins per island (no UT’s). 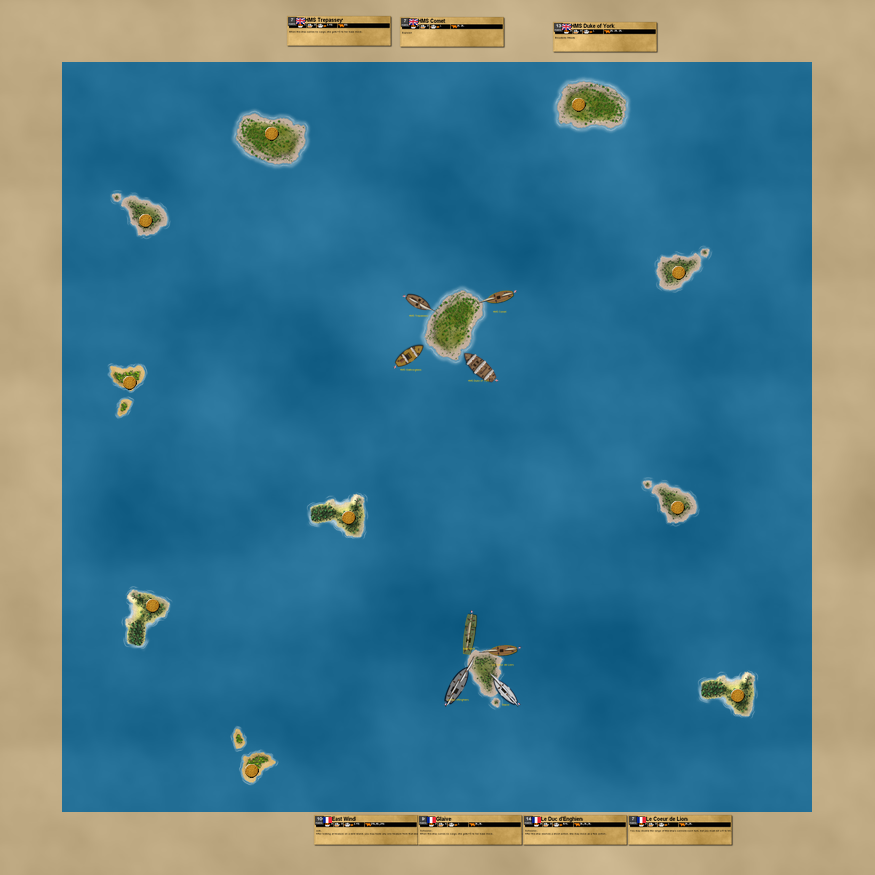 Knowing combat would be hampered without any captains to rely on, I purposely chose the SCS version of the Coeur de Lion with her sniping ability. I got a handful of extra long range potshots in early against the Gallowglass and Duke of York, but none of them connected. JohnLock’s method of tagging the deckplates around with the ships is a solid way to keep track of things for beginners. (to which I said: “never woulda thought a that!”

Many ships picked up gold from the various wild islands in play, while the Coeur mounted a somewhat heroic and effective defense of the French home island. She was able to hit 2/2 with her regular 2L guns once the Englishmen came into range. Again, no captains on gunships meant that the first shot would usually go to the defender. 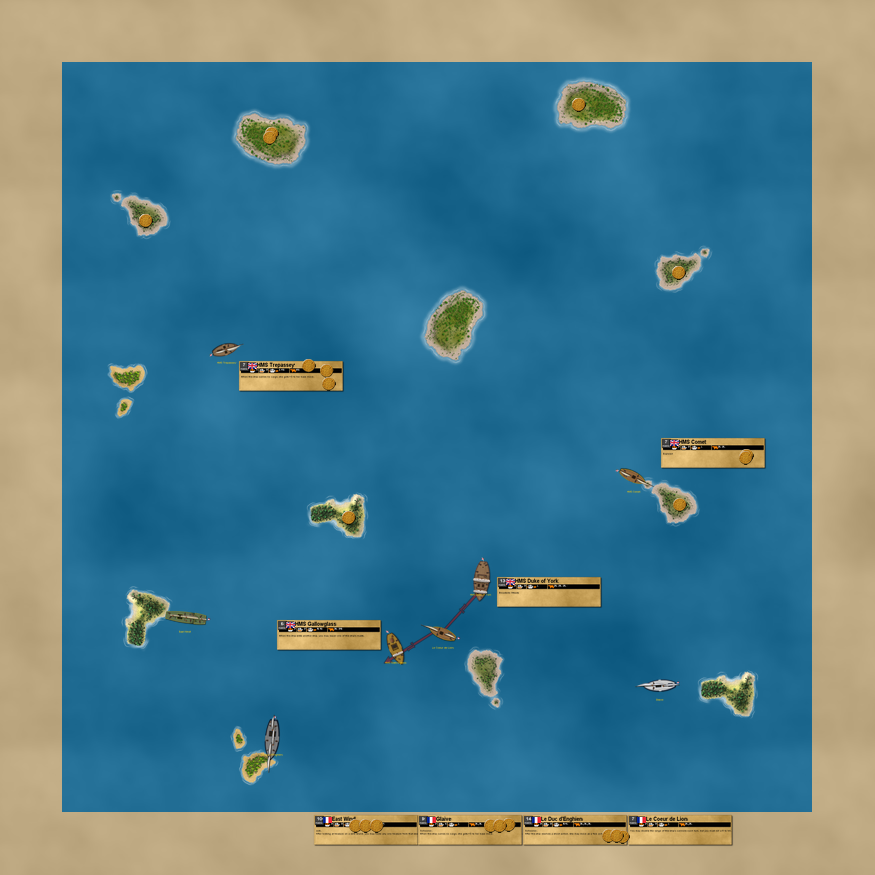 Eventually the English began hitting their mark, but by the time the Coeur was in trouble, the French “cavalry” was returning home! All three of their other four ships arrived on the scene to turn the tide back in French favor.

In a rare usage of reverse captain, the Duc dismasted the Gallowglass and then docked home her gold, simultaneously blocking the Coeur from the Gallowglass on the previous turn to potentially save the former from sinking. The East Wind captured the Gallowglass, while the Glaive unloaded some loot from the southeast. 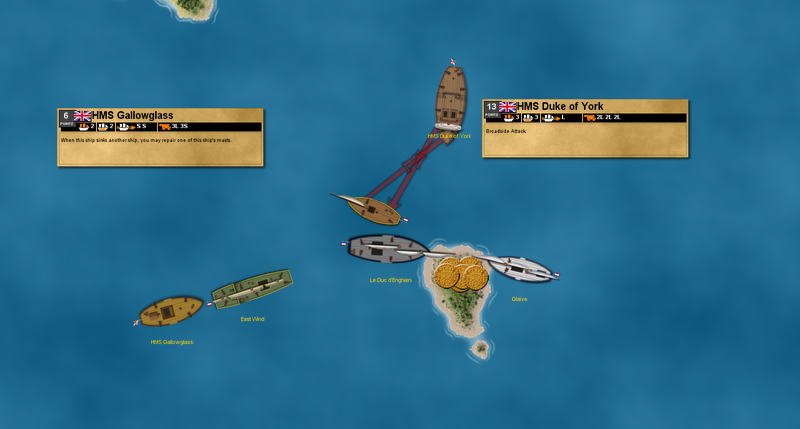 The Duke of York did manage to get the better of the Coeur, but she too was dismasted by the Duc of the French fleet. Once again the reverse captain ability proved some measure of worth (usually it doesn’t get used since there aren’t many opportunities for it, and it’s certainly overpriced), as the Duc shot off the Duke’s final mast (getting confused?) and then moved to tow her as well. We both agreed to call this “VASSAL introduction” game a bit early, and the French won 24-21! 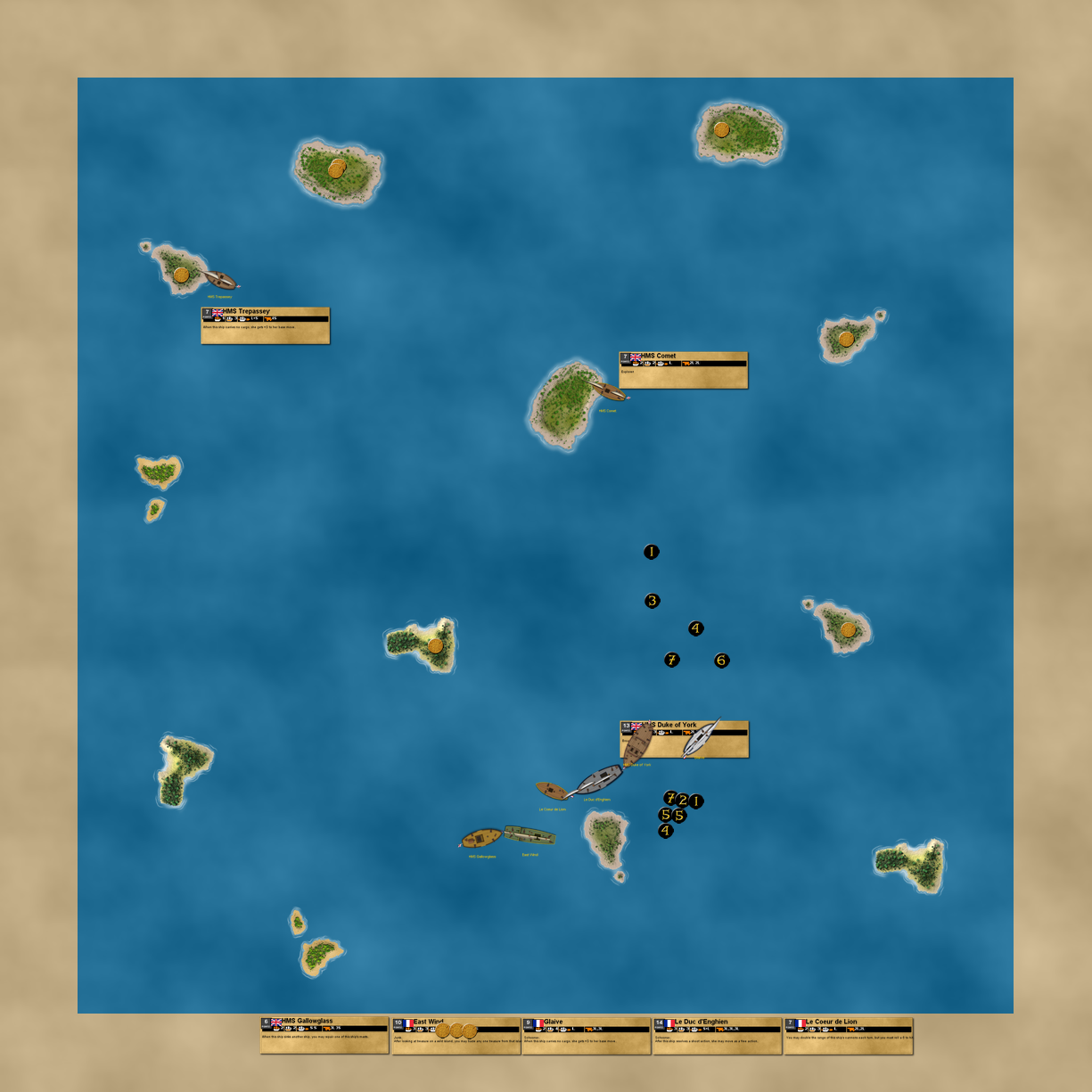