April 9th is the 10th anniversary of Fire and Steel being released. Xerecs and I played a little “celebratory” game to commemorate the anniversary. (not sure if this particular set is worth celebrating… XD)

I believe this is the first time we’ve tried to proxy a switchblade into VASSAL. For now, I used an L-range tool rotated from the center of the Salient.

For the setup, the “move and rotate randomly” option worked better than it ever has before for me. The islands and terrain were generally placed that way.

Both fleets headed a bit southwest, with the Ark Royal being the first to explore:

However, both fleets found only 0 coins at their islands!! I had placed six 0’s and two UT’s into the treasure mix, and it quickly dawned on me that Xerecs may have placed only 0’s as well! 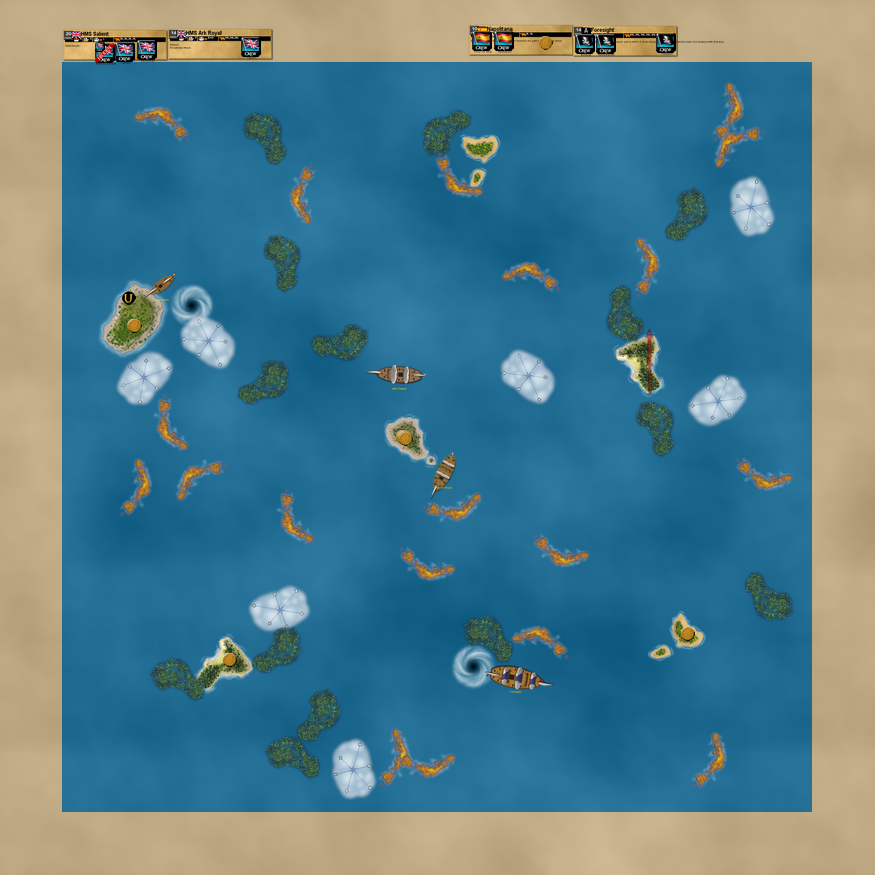 The Ark Royal and Salient split up, while the Napolitana brought home a coin… which I assumed was a 0. 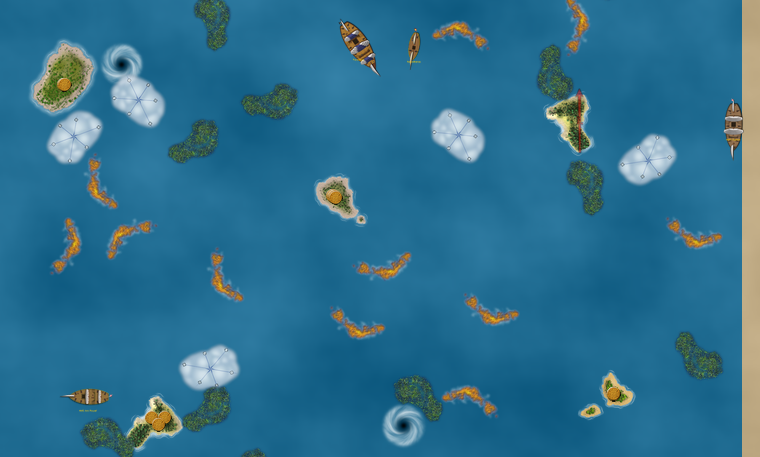 The Napolitana got an EA from de Alva and shot up the Ark Royal. She was attacked by the Salient immediately, but only lost one mast.

The Salient eventually dismasted the Napolitana and started towing the Ark Royal, which the English were trying to scuttle. By this point the Salient was loaded with some “extra weaponry” in the form of Ammunition (turned into Stinkpot Shot) and Deck Cannon (transferred from the Ark Royal). 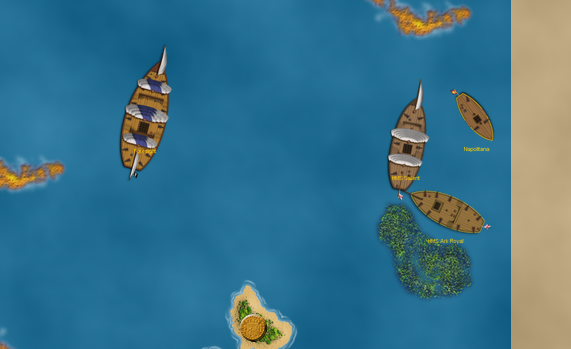 The Foresight got involved, hitting 1/2 on the Salient. The Salient answered with a big turn, combining her proxy switchblade with a solid 2/3 shooting effort (helped by the extra cannon and HGold’s reroll) to knock 3 masts off the Foresight and kill the Pirate oarsman. 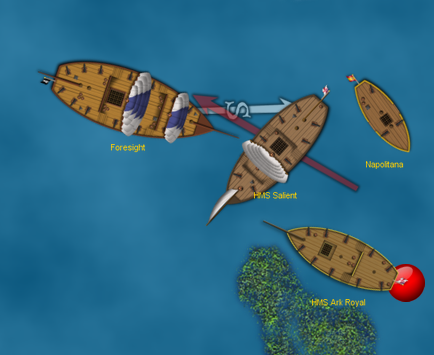 The Foresight’s shooting and ramming attack dismasted the Salient! Barstow captured Hermione Gold! However, just as the tables turned against the English, the Ark Royal warped home via an Eternal scuttle. 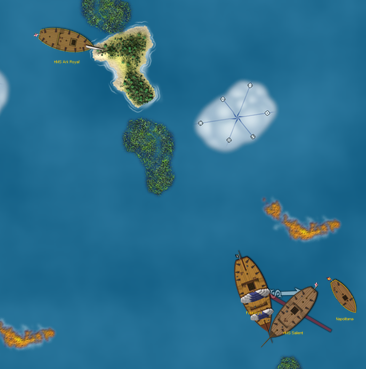 The Foresight round earthed to the north, where she was caught by the Ark Royal JUST before she could dock home HGold for an 8-gold payout! (a haul of Gold, in more ways than one! XD) After electing not to use Broadsides Attack (my luck with it is generally horrible, and with the ram attempt after the shots I had a decent chance of getting 2/3 rolls to work), the Ark Royal hit twice in a row to dismast the Foresight! However, the English killed Barstow in their valiant boarding attempt, eliminating any chance of getting Hermione Gold’s payout to work… for themselves? (this was getting even weirder…) 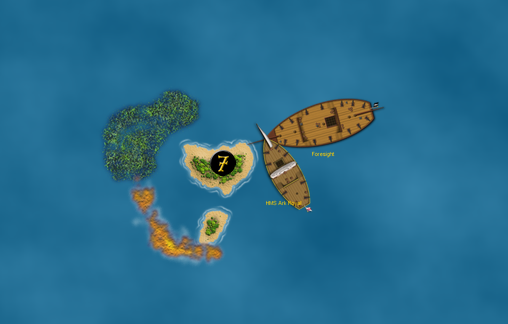 The Pirates now had no future move actions left, so the game was over. To my chagrin, the Napolitana had indeed brought back a 7, not a zero! This put Xerecs firmly in the lead, as the Spanish Pirates beat the English 7-0.

This was a very Fire and Steel 10th Anniversary game that came down to the wire. Once it became obvious that most or all of the coins would be worthless, I was afraid it would be a boring deathmatch. However, the endgame was very tight and satisfying, with multiple momentum shifts throughout. I finally tested out my idea of using only 0-value coins, which I have talked about multiple times on the forum at Miniature Trading. Unfortunately I couldn’t get the single coin worth a dime, let alone 7 gold! XD It was also notable as (likely) the first VASSAL game with a switchblade present. Using the L tool as a proxy worked fine during the one blade attack, but I still want to measure a physical switchblade to see if it’s the right size.

Thanks for reading; only one more anniversary game remains!