Pirates of the Caribbean movie – My favorite is… 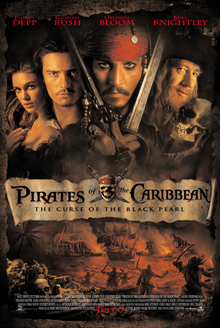 Buy the movie for an incredible experience!

I’ve seen all 5 of the Pirates of the Caribbean movies multiple times.  In a separate post, I ranked them all.  If you’ve already seen that post, this one won’t come as a surprise.

Of course my favorite is the first one, The Curse of the Black Pearl.  Not only is it the best movie in the franchise, it’s the best movie I’ve ever seen!!

A true swashbuckling film from start to finish, this movie resurrected the pirate genre and spurred a blockbuster series that has lasted 15+ years.

Cons: None!  The Curse of the Black Pearl is the most perfect movie I’ve ever seen!

In addition to being an incredible film, it seems to have inspired some of the Wizkids sets that came out afterwards, such as Davy Jones’ Curse and Ocean’s Edge.  Taking it a step further, Wizkids even partnered up with Disney to make the notable Pirates of the Caribbean set! (which you can find details about here)

Not only a great movie, but a nice set for the Pirates CSG game

In the PotC set, the Wizkids Pirates game saw a ton of useful and awesome pieces from the first movie come to life.  Captain Jack Sparrow is arguably the greatest crew in the entire game (fittingly enough perhaps!).  The Black Pearl is one of the most fearsome gunships in the game.  HMS Interceptor has the potential for blazing speed.  Many other great crew and Unique Treasures make up the set, in addition to the game pieces added for the second and third Pirates of the Caribbean movies.  Check out the podcast below for a full overview of the set!

What is YOUR favorite Pirates of the Caribbean movie??

Posted in Reviews and tagged 2019, Pirates of the Caribbean.