CG4 has continued with some interesting developments, especially regarding my own factions.

The situation in the far north continues to slowly escalate.  At the left near the fog, the Eagle pursued the Diversion for a turn, hitting once to slightly damage the ship but not take a mast off.  We have ruled that partial hits (hits that are considered damage but do not remove a mast due to the 2 hits/mast rule) can be repaired as normal to get a ship up to full health.

The Pirates considered using Elizabeth’s Piece of Eight to give the Eagle an EA to do a hit and run strike on the Diversion, but felt it wasn’t really worth angering the Vikings even more. Plus, they wanted to maximize profit at the end of this resource duration.  The Eagle and Mermaid (towing the Widowmaker flotilla) would soon turn around, as the Vikings launched the dangerous Muninn with plenty of fighting-style cargo.  The Pirates used one of their spyers to see the equipment on the Muninn, which may convince them to stay away for now.  However, check out the long range ruler I created to test the Selkie’s maximum cannon range – at 4L range she is nearly able to start firing potshots at the Corsairs already!  O_O  The 4 masted galley docked at the textiles island is the Akua Lapu, a Pirate (and not Corsair) ship.

Here is the northwest, where the Cursed and Americans reside.  The Dutch ship Prins Willem came through a whirlpool to pass Plague to the Cursed!  Although slightly annoyed, it happened at a somewhat convenient time for the Cursed, as nearly all of their ships are arriving home at the same time after being largely scattered for a while.  The Opal Shrine plans to pass the Plague to the Sea Duck so she can eventually unload and transfer some of her cargo.  The Americans have launched some gunships, after which their controller admitted “the newly assembled strike force is looking for a target…”  An interesting thing to announce!  🙂 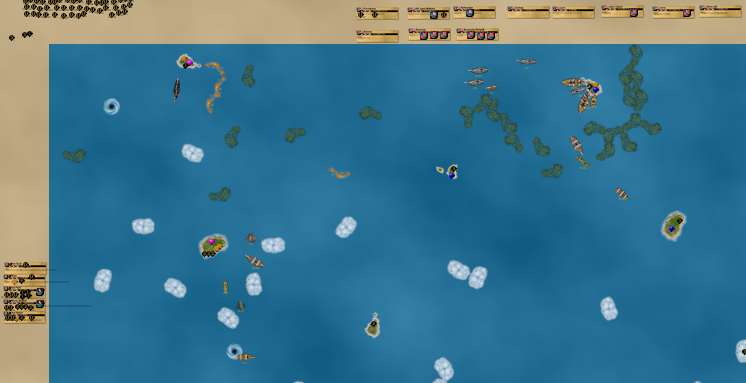 The Pirates consolidate their forces and continue to get as many valuable textiles as possible.  The Selkie missed her chain shot against the Winds of Vengeance with a 2.  The Osiris sailed out to escort the Corsair galleys coming home with textiles, forgetting that it would expose her to a potshot on the Pirate turn.  The Pirates have launched the Rover with a helmsman to be a designated tugboat – assigned to tow home derelicts, both friendlies and prizes.  The captured Sleipnir doesn’t need any help with that, having S+S speed while derelict between her Longship rowing capability and +S with no cargo.

With the Pirates establishing a stronger and more militant presence around “their” textiles island, the Corsairs are beginning to focus more on alternatives for their gold runners.  They have about 6 ships making trips to the spice island in the northeast, while at the bottom of this picture you can see 2 galleys headed south, off to explore new waters for the fleet.  The Vikings have a decent but slower operation going to the west, but they are very dependent on lumber staying valuable.

The Pirates continue to show that they are the biggest fleet currently in the game, making big strides on a great turn!  The Raven unloaded the town upgrade, meaning their textiles island is upgraded on the following turn.  This prevents other factions (namely the Corsairs and Vikings!) from loading resources from the island.  The Selkie missed an “exploding potshot” against the Osiris, who quickly returned to the safety of the home island.

At the end of their turn the Pirates spent their gold to launch the first “WMD” (weapon of mass destruction) of the game.  The Stormcloud is a custom 10 master from my Epic Seas set: 47 points with fog hopping built in!!  O_O  She carries numerous crew, many of which are face down.  The Pirates also launched the Splinter with a captain and helmsman, likely as a defensive hybrid to further increase protection for the resource fleet while also helping them (albeit slowly) gather textiles or other resources.

For the other factions in the area: the Diversion is fully repaired, while the Corsairs are about to dock home their galleys for a decent windfall.

Also check out the BR’s for CG4 done by Xerecs!