This is the first in what could be a nice long Q&A series.  From my Eternal keyword video.

Is there absolutely no way to eliminate a ship with eternal built in? And if no does this cause any gameplay issues for smaller games or against opponents with a small variety of ships?

Eternal is underpriced by a point or two, but it’s not as powerful as it sounds. With the right tools and strategy, it’s not a big deal to counter. Best way to sink an Eternal ship permanently is with a canceller. Cancel the Eternal ability right before you take the shot to sink the ship.

You can also capture Eternal ships and use them against your opponents. Just keep in mind that you’ll need to eliminate any oarsmen on the ship first, since they prevent dereliction and therefore capture. This is one of my favorite ways of dealing with Eternal because you can capture an enemy ship instead of “sinking” it and then immediately scuttle it and try to warp it back to YOUR home island instead of theirs! I was able to do this in CG3.

There are a few niche things you can use to make Eternal less effective too – simply leave the ship with no masts and refuse to sink it. Or use the Periscope UT to cancel the ability like you would with a canceller.

If you don’t have many tools available to help you with the above methods, simply sink the ship as quickly as possible and try to win the game before it comes back.  Repairing an Eternal ship to any level of respectable health (likely 3+ masts for any gunship) can take a while.  Not to mention how long it will take for the ship to get back in action.  By simply blasting the ship away each time it approaches, you can minimize the threat by keeping it repairing at home rather than causing chaos on the battlefield.

Where it DOES get nasty

The tricky part is when you combine Eternal with other defensive stuff – such as a submarine with a canceller aboard as well. Think USS Mercury with both Ralph David (Eternal) and DNT (Canceller), with an oarsman. That’s when it gets a bit OP, but that kind of combo is really only valuable in deathmatches or big games, not so much competitive games with gold.

Eternal mostly only causes gameplay issues in deathmatches. My favorite house rule there is to only allow it to work once. So if Eternal is used in a deathmatch, the second sinking is permanent.

Thanks for the comment and let me know if you have any other questions. 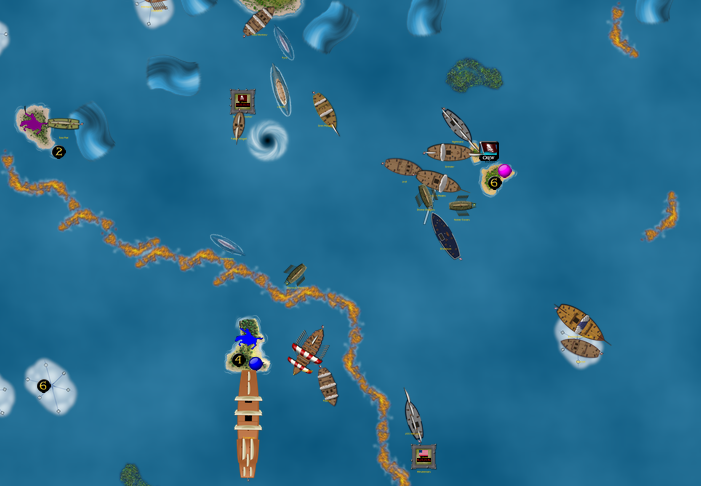 Captured Eternal ship carrying Davy Jones at the lower right after my Americans nabbed him in VASSAL Campaign Game 3 – click for details!

Posted in Informational and tagged Q&A.