Posted in the Thread of Threads on Miniature Trading on December 9th 2016.

This is pretty random, but seems like it should go in this thread.

I feel like there have been distinct phases of the forum:

The game was still in production, and the forums were filled with set previews, discussions once a set was released, and general thoughts (sometimes positive, sometimes negative) on the job Wizkids was doing. The fleets and reviews sections were lively, while updated rules and new keywords/game mechanics kept things interesting.

After the demise of Wizkids in late 2008, there was tons of uncertainty concerning the game’s future, how prices would be affected, and what it meant for the game’s base of players and collectors. Then NECA purchased the rights to Pirates in 2009. These years also saw an interesting time period for collectors, with the game being out-of-print for the first time. 2 of the possible 4 mysterious “Ships in a Bottle” found their way into the hands of an old_man, while drama reigned in the world of the Obago Deuces. In 2012 a cards-only “relaunch” was released to much general dismay. Some may consider this the final nail in the coffin, while it could also be considered a positive.

As the anniversaries of the game’s demise passed, many collectors completed their collections or left the game entirely. A new era of battle reports was born, with many epic campaign games being played, mostly by a7xfanben and xerecs. Many fleet challenges have taken place, and some were even played out on the VASSAL module. This is also the era of the “megathread”, with many threads reaching massive numbers of pages and replies. The forum offers a great variety of topics on the game, perhaps the most diverse in its history.

Likely a continuation of the latest era, with emphasis on keeping the game alive through teaching new players, taking full advantage of the VASSAL module, and keeping the forum active and awesome.

-However, the revelation that Miniature Trading could shut down has put everything in doubt.  The Pirates forum has already seen severely decreased activity – after all, if the status of the site is in doubt, why bother using time writing up threads or making fleets that could permanently get deleted any day now?  🙁  At this point I’m just going to do what I can to make sure that my Pirates forum lasts indefinitely. 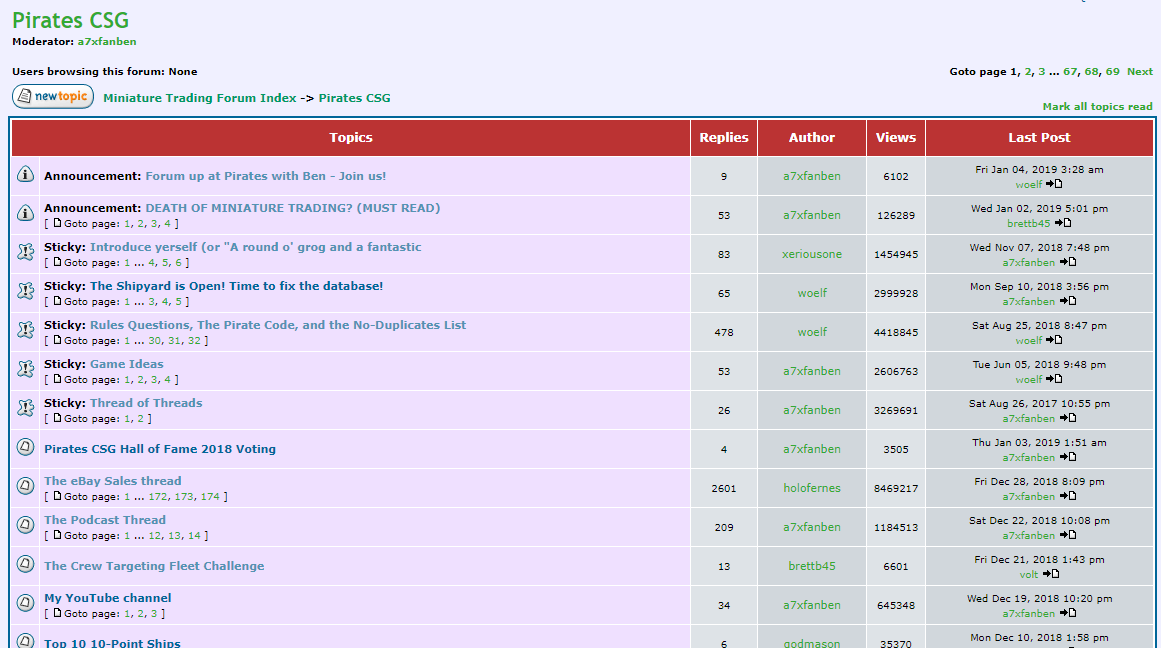 The Pirates CSG forum at Miniature Trading on January 8th 2019, showing the severe lack of activity compared to years past.