It only took me about a week to really rev up “production” and I was off to the races creating a TON of fantasy customs.  On February 9th I officially announced my second custom set, which would be an all-fantasy set to be the utter opposite of my main custom set, Pirates of the Age of Sail.

Eventually I decided to name the new set: Pirates of the Epic Seas (you can see it on the 4th sheet).  I generally enjoy the “epic” side of things, which you can see in my favorite movies and music.  Throughout the process of making the set I constantly underestimated how big it would get.  The set quickly grew to over 100 game pieces in February 2018:

There is more coming, but I would estimate that I won’t add more than a few dozen more pieces eventually. That could change, but for now the set is mostly done.

Boy was I WAY wrong!!

I am happy to say that Pirates of the Epic Seas has reached ONE THOUSAND total game pieces!!!  O_O

Lately I have been finalizing the set in various ways – almost every game piece should now have flavor text.  The only exceptions should be some of the stuff that normally didn’t have flavor text – UT’s and equipment.  I’ve also been working through some of the unfinished or partly finished customs, to the point where now there shouldn’t be any customs in the set that are “not ready for playtesting”, which I like to denote with a question mark somewhere with the ship stats/abilities.  The “Collector’s Numbers” are mostly inaccurate and simply reflect which game pieces have been publicly released on a forum such as the Custom Ships thread that you can post in.

I’ve also completed the set description that would theoretically be on the back of any packs for the set:

Chaos reigns. Strife is rampant. With the global political situation teetering on the edge of absolute catastrophe, conflict seems inevitable. The Cursed have risen again, and appear to be far stronger than ever before. A prolonged worldwide arms race and increasing tensions in every ocean can lead to only one thing: WAR. Gold will be lost, and glory will be found. Which side will you take in Pirates of the Epic Seas?

I’ve been wanting to do a “set analysis” for quite some time, and now that I’m pretty satisfied with the set’s progress, hitting 1,000 game pieces is the perfect time to finally look at the numbers.

Pirates of the Epic Seas: By The Numbers

English (All LE, as they were never supposed to be in the set)

Pirates of the Caribbean movie pieces: 10

Total new game pieces: 1,002 and counting (including the 2 “Unreleased” whose designs are confirmed)

The set was NEVER meant to be balanced, in terms of factional parity or in terms of ship/crew ratios within each faction.  That’s part of the reason it’s pretty random.  However, I’m actually quite satisfied with how it has turned out.  Below you can see part of the new sheet with the breakdown of game pieces. 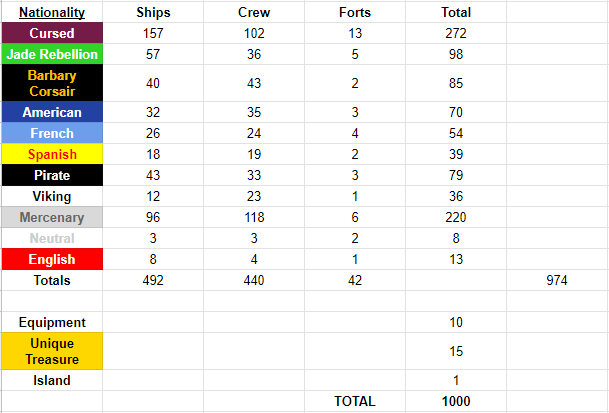 Thanks for checking out my custom set!

Pirates of the Epic Seas