Just played a game with Karan R in India!

In their first game of Pirates, Karan went first with Barbary Untouchables V 2.0.

After a turn and a half, the Corsairs stick together while the Augusta prepares an island for the Angel. 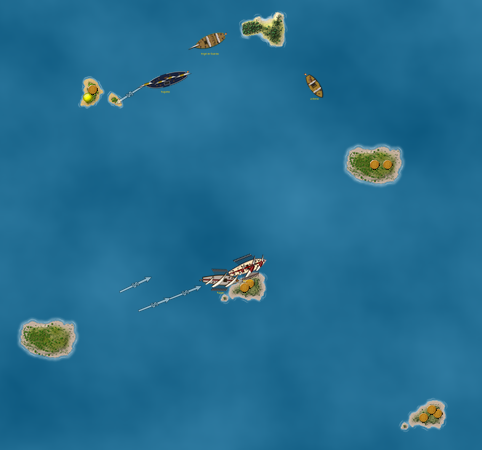 The Angel, Iberia, and Tiger’s Eye all grabbed gold, while the Augusta and Nubian Prince eyed each other near the Iberia. 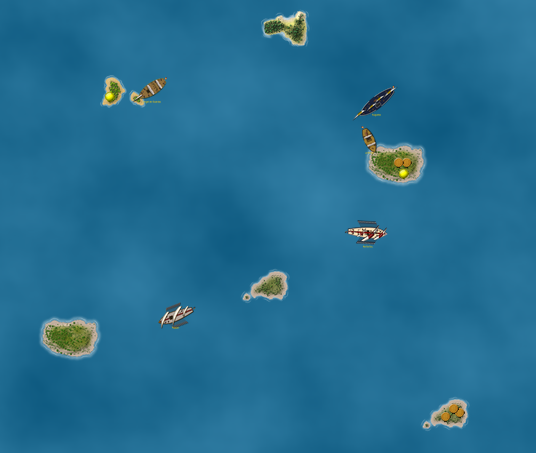 The Augusta blocked the Nubian Prince to ensure the Iberia got home safely, and both fleets unloaded considerable hauls of gold.  The NP dumped a crew to make room for a coin, while the Augusta sped off to intercept the Tiger’s Eye. 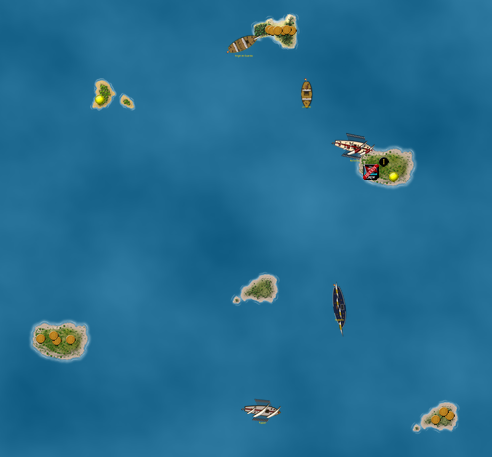 The gunships of each fleet started attacking the gold runners!  The Iberia was dismasted, soon followed by the Tiger’s Eye and Angel. 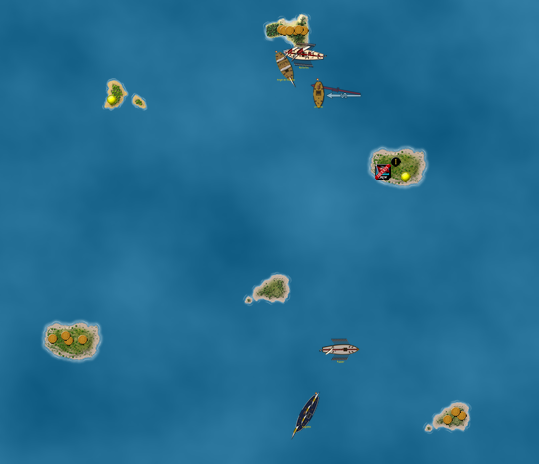 The Augusta sank the Tiger’s Eye while the Nubian Prince sank the Angel and Iberia, leaving just the two gunships.  The Augusta knew she couldn’t win a fight with her S range guns against the NP’s ability, and decided to drop both crew and load coins from the southeastern island. 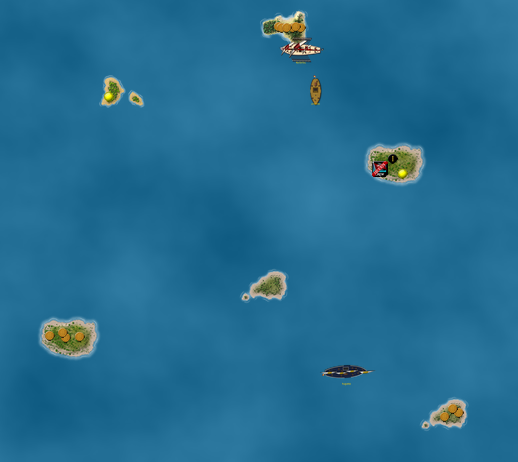 A chase ensued, where the NP caught the Augusta and sunk her!  Divers was flipped by the Corsairs to receive both coins (using standard treasure rules unlike in most of my other games).

Karan R has their first victory in Pirates CSG, and another player has been introduced to the module!  Also, another country is added to the list of locations where people have played Pirates remotely!  (joining England, Spain, and Singapore, likely among others in the past)

Taught two relatives how to play today!  It was a very simple 20 point introductory game using the simple rules.  Didn’t have my camera or phone with me but here’s a quick summary:

I went first with the Templar and Lucy’s Luck, followed by a player with the Enfant Terrible and Felicite.  The other player fielded the Lord Cauldwell and Scorpion.  The Lucy’s Luck and Scorpion were able to bring home 3 coins apiece in their first trips.  The Templar shot 2/2 to dismast the Felicite, who was later towed home by the Enfant Terrible, but not before the Templar stole 2 of her 3 coins.  Those coins were fought over for the rest of the game, with lots of ramming and boarding between the Lord Cauldwell, Templar, Scorpion, and Enfant.  In the end, I tied with the LC/Scorpion player with 13 gold apiece (they won the masts remaining tiebreaker), while the French had 4.

Played another game on VASSAL with pirateaj14, this time a 60 Point Game.

The SC lost three masts to a reef, while the Dauntless prepared to shield the Interceptor from the oncoming Spaniards.

Much gold was loaded, with the Edinburgh Trader finding Holy Water and Rum, providing an eclectic concoction for her helmsman to consume…

The San Cristobal was unsuccessful in her assault on the Dauntless, who promptly sank her.

The Resolucion outdueled the Dauntless, prompting the Englishman to flee into a fog bank. The crew of the Edinburgh Trader sobered up for the journey home, where they were passed by Norrington in his speedy Interceptor. The Alquimista and Monarca have unloaded gold for the Spanish.

I noticed how much gold was left in play, and decided to send the Dauntless back into action. However, she was ineffective against the Resolucion and Murtog sadly died in the fiasco. The Edinburgh Trader unloaded some nice coins, while the Interceptor had no choice but to enter a fog bank on her way east.

The Interceptor intercepted the Monarca and sank her! Soon afterwards, pirateaj14 had to leave, so we counted gold. The initial count was 33-32 in favor of the Spaniards! However, there were two caveats. The real score was 35-32 because the Alquimista would have given the Spanish 2 more gold with her ability. In addition, there was some gold left in play (a 6 and a 2), which likely would have been English by the end of the 60 point game. Therefore, a win with an asterisk for the Spanish, but a win nonetheless!

The first game was at 45 points, and featured these fleets.

a7xfanben:
Large Fry – Spanish Swarm (due to the higher build total I swapped in a regular captain and put an explorer on the Morning Star)

5 wild islands with 4 coins each: 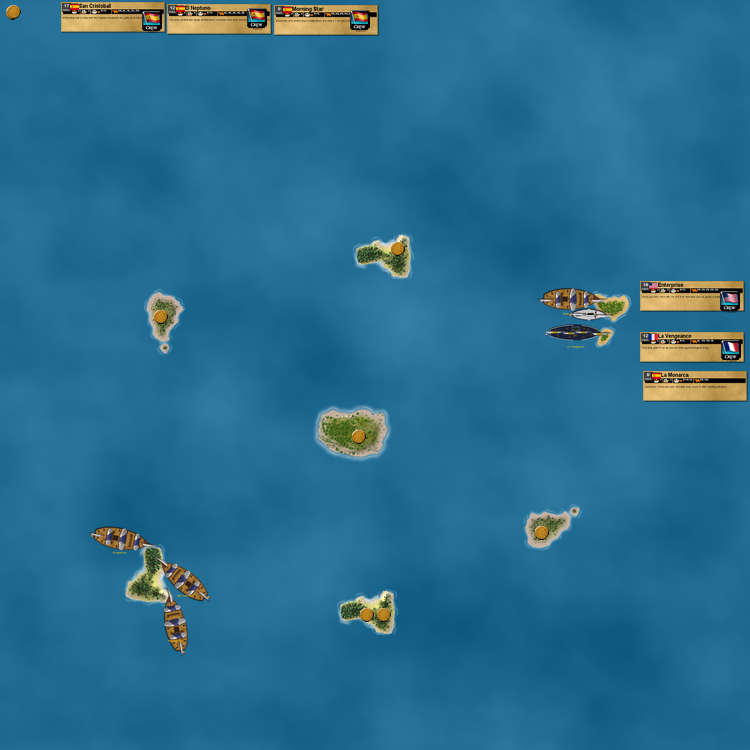 The San Cristobal managed to get the first shot against the Enterprise, dismasting her after a brief battle. Though, she was lucky that the Enterprise didn’t get an extra action on the allies’ turn. The Vengeance has set upon the Neptuno, but fares poorly. This game featured above-average luck for me, as I rolled to go first and experienced accurate gunnery with the San Cristobal’s average cannons. 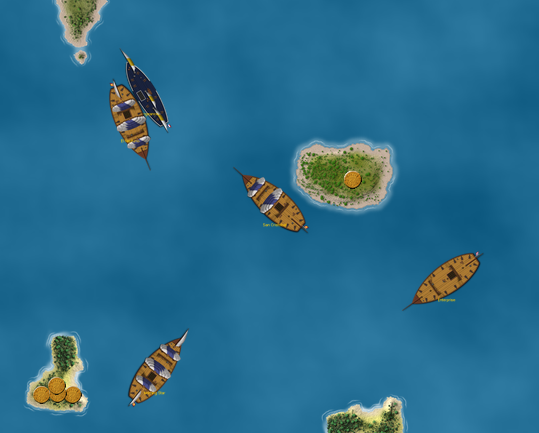 The Vengeance hit 3/3 to take the Neptuno down to one mast, but with the help of the SC, the Spanish teamed up to dismast the Vengeance. Both her and the Enterprise were captured, leaving the allies with just La Monarca. 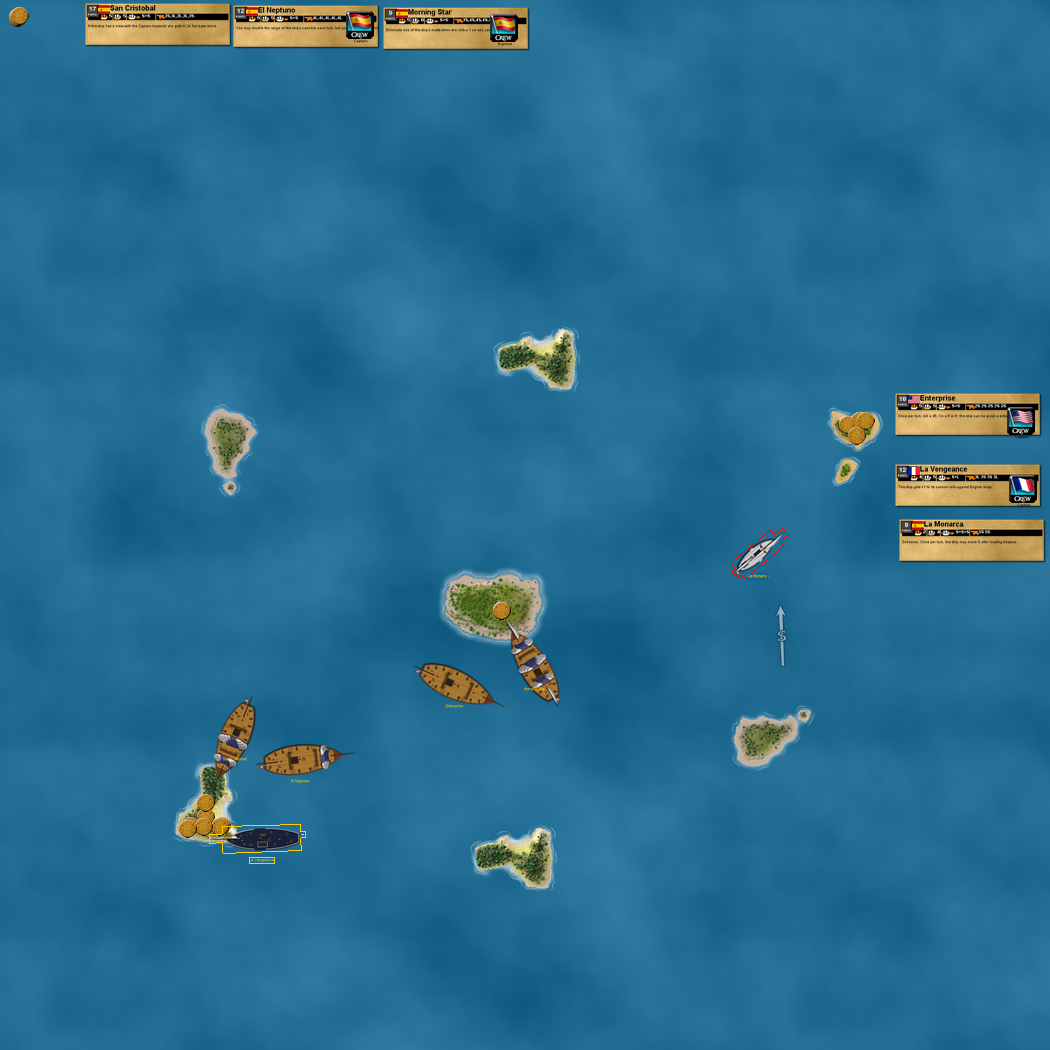 This was a somewhat unique 41 point game, to accommodate the extra stuff we wanted in our fleets. (the treasure distribution was the same but with different coins) 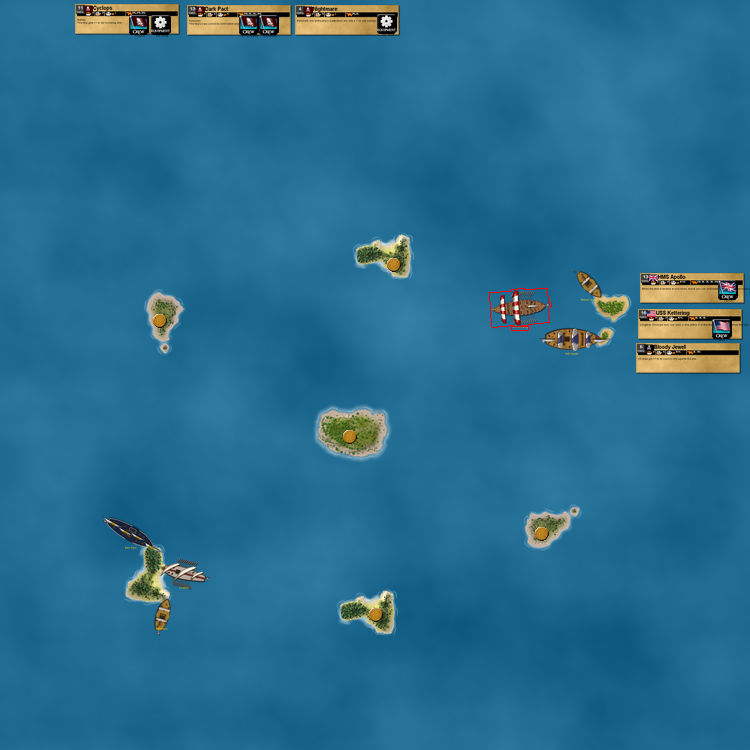 The allied gunships were content to run gold, so the Cyclops had an easy escort duty protecting the Dark Pact. 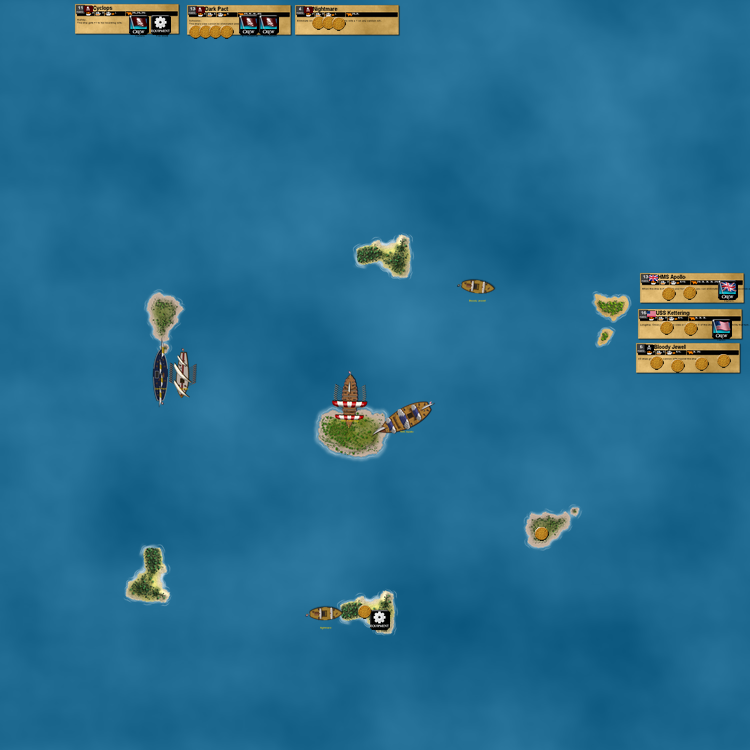 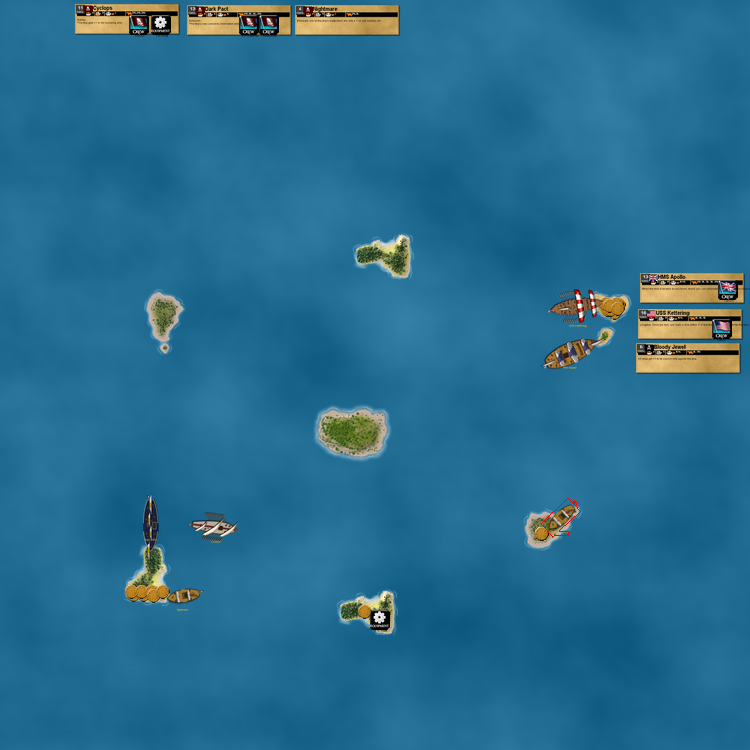 This is where things got interesting – all 4 larger ships meet near the middle, with El Fantasma looking to use a ghostly surprise and somehow evade the powerful gunships in the opposing fleet. The Kettering’s canceller and the Cyclops as a potential sacrificial/blocking ship loomed large. 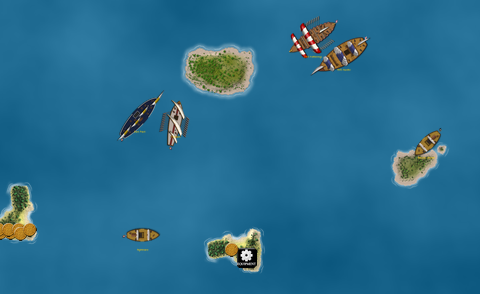 The Kettering hits the Cyclops, but the Cyclops returns the favor by hitting with fire shot! The longship is set aflame while the Dark Pact uses Ghost Ship (a tiny bit lol, tough to maneuver at S+S speed) to make a break around the quiet northern side of the island. 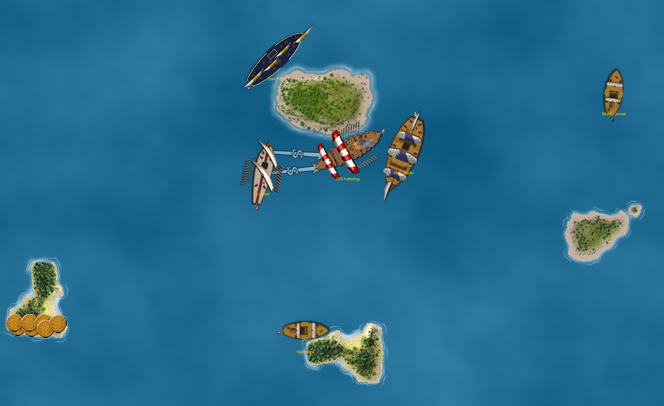 The Kettering and Apollo dismast the Cyclops, but that lets the Nightmare get her 2L cannon in range of the Apollo. However, her fire shot misses. 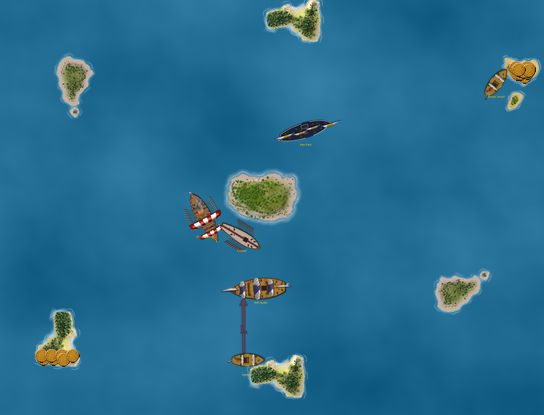 In a small miracle, the Kettering’s fire spread, she missed her shots against the Nightmare, and the Nightmare set her final mast aflame before sinking her for good! The Cyclops also sank, but the Dark Pact gave the Cursed hope – she made it to the allied home island! 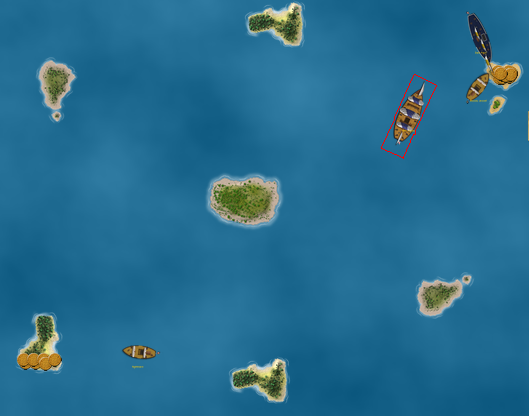 The Dark Pact grabbed a coin with El Fantasma before being blasted by the Bloody Jewel and Apollo. The Ghost Ship keyword came in handy here, giving the Dark Pact a better chance at survival than if she had simply turned around. (she went through the allied home island) 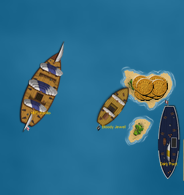 Here we ruled that the Bloody Jewel could shoot at the Dark Pact because she had a clear line of fire between the two islands that made up the larger allied HI. The Apollo later dismasted the Dark Pact to end the game! 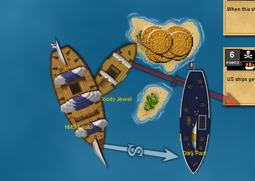 The gold was counted and the allies had won a 29-23 victory! (32-23 if the Dark Pact and her stolen coin was recaptured) The Cursed nearly pulled off an upset, but their slow speeds and English gunnery made it impossible. This was also the first games where I’ve used the snipping tool to take pictures rather than just using the picture function within the module (taking screenshots rather than editing pictures of the whole ocean). It definitely saved time and is very useful for anyone who looks to take pictures on VASSAL in the future.

This was a fun day of piracy that saw a new player on VASSAL. Welcome him into the community and we hope to play again soon! Join us on VASSAL!