@Jonathan Bowen: Repeating Guns seems like a very risky ability. I suggest changing it to “this ship” for the last part of the wording.
The “Gil-Adriel” (Galadriel?) seems extremely overpriced. I would capitalize the C to make it Cursed (more obvious that it’s factional) and drop the “actions are not abilities” part since it seems unnecessary. Unless I’m missing something, 6-7 points would probably work.

Alright, after quite a long break, it is finally time to reveal another 10 master!! XD And a BIG day for custom reveals overall!

Flavor text: Bursting forth from the fiery depths of hell comes the latest in a long line of Cursed behemoths. Setting sail from deep in the Indian Ocean, Diabolos is taking “His Wrath” to the Americas to wreak havoc and send humans to their doom. With a cargo hold always full of ammunition, the crew has but one purpose – sink enemy vessels, whether they are above or below the waves. Plunder is ignored in the conquest of annihilation. 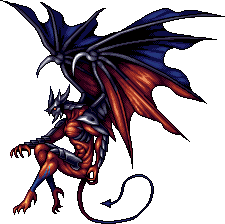 Faction Affiliation: Cursed
Rarity: LE
Type: Crew
Point Value: 16
Ability: Loyal: Cursed. Captain. Once per turn, choose one enemy ship within L of this ship. Roll a d6; on a 5-6, eliminate 2/3 of that ship’s masts (rounding up from .5 and greater), ignoring all defensive abilities. This crew may use his abilities only aboard Cursed 10 masters.
Link: Devil’s Wrath

Flavor text: Called by Xenthalos from Hell itself, Diabolos is as close as mere mortals can get to seeing the Devil himself. Upon seeing the dominance of mankind over the world’s oceans, he flew into an unstoppable rage. Often using a flash fire burning power, he can destroy masts and rigging with blasts of fire with nearly no drawback. Rumor has it that he can fly – if true, his newest opponents in the Atlantic will be charred corpses on the ocean by month’s end.

Diabolos translates as “Devil”, partially inspired by the villain from Final Fantasy.

I originally had his feature ability eliminating all but one of the enemy ship’s masts, but then you could take a 10 down to 1 mast with one die roll… I know it’s still OP, but I may increase the cost even further or make it happen only on a 6. (the ability is based on the Dark Messenger ability in FF6 which is actually more devastating (leaving you with 1/16 of your HP lol). I may also make him more crazy with flying/fire abilities, but for now Doragon the Magnificent is the only character I’ve made who can fly, and it should probably stay that way. XD

Historical Custom of the Day #250