This 3 player VASSAL game at 40 points was between morgull (Jose on the module), nickster5000, and myself.

Nick went first with a Pirate fleet, using the SM Harbinger and Recreant. Morgull followed with his own Pirate fleet, which included the Black Swan, Longshanks, and Bloody Jewel. I used a variation of my Miniature Englishmen 2.0 fleet.  (all game pieces can be found in the Master Spreadsheet) 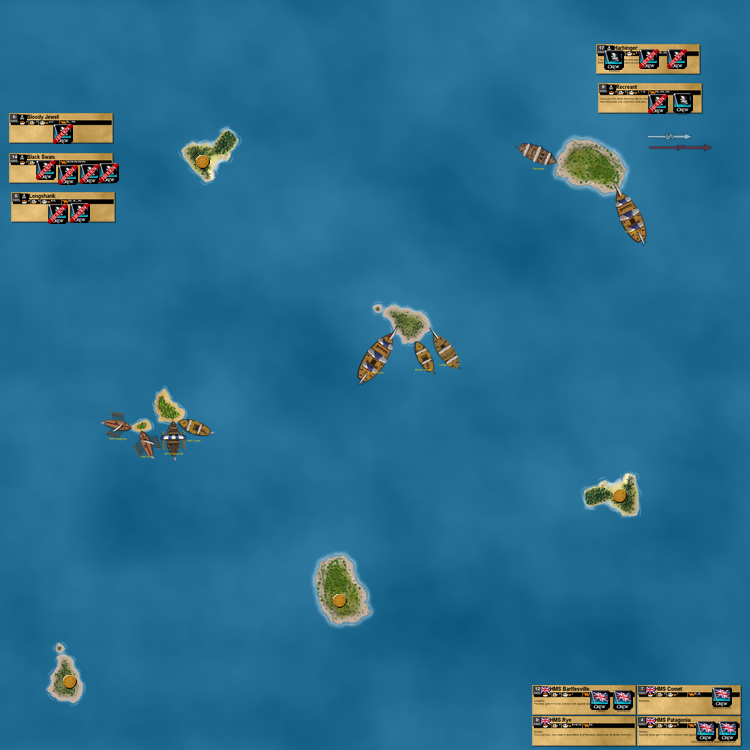 Maps of Alexandria revealed the treasures, and I had the best home island position. That’s exactly what I needed, as my fleet was at a firepower and speed disadvantage. Here the Comet manages to hit the Black Swan, while the Rye gets into cancelling position. 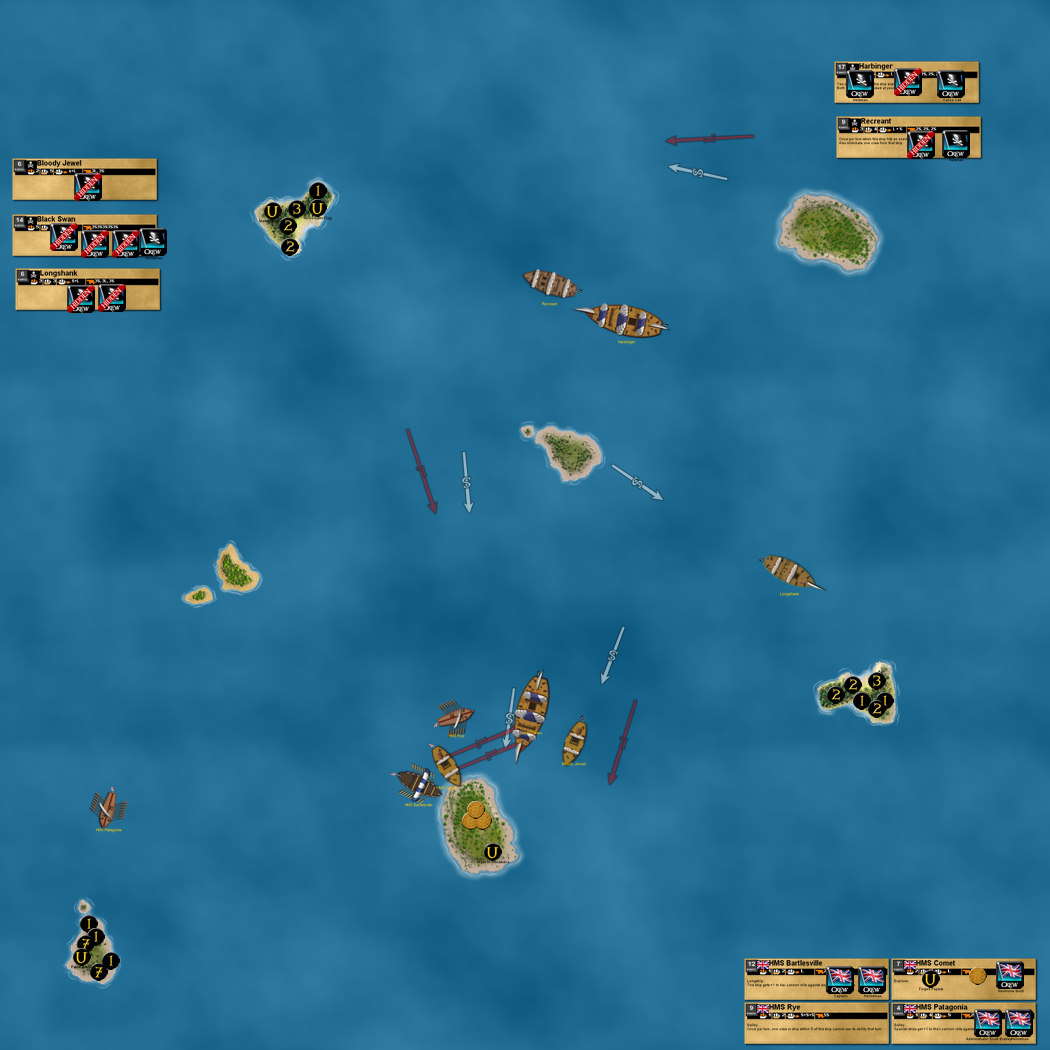 The Black Swan sank the Rye while also revealing Havana Black. The English tried their best to position themselves optimally on their turn, with the Comet simultaneously shooting and turning for home. The Bartlesville shot at and rammed the Black Swan while trying to block her from getting at the Comet. You can see that the other ships have reached islands. 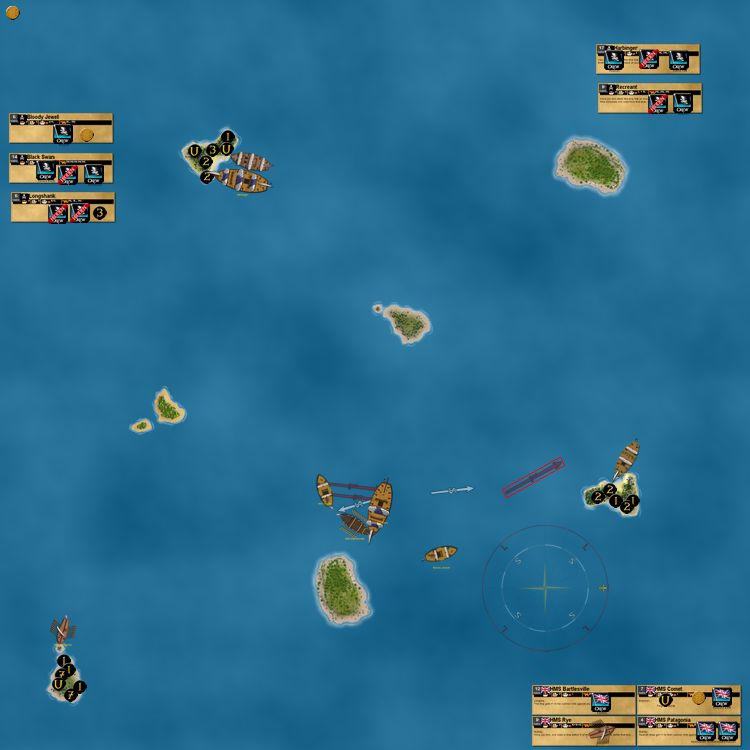 With the Black Swan approaching from the south, and the Harbinger breaking from her position in the north with the help of Calico Cat, the Comet was in trouble. However, she somehow survived the dual threat and was able to dock home a 6 coin, taking a mast off the Harbinger in the process! The Bartlesville’s rowers weren’t quite able to ram the Black Swan in time, and the Patagonia now looked to be in trouble in the southwest. 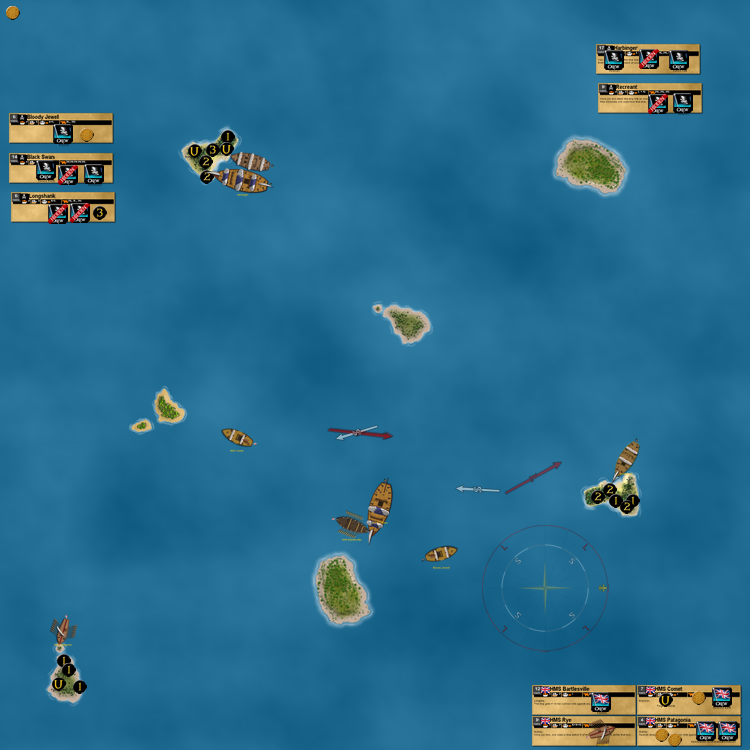 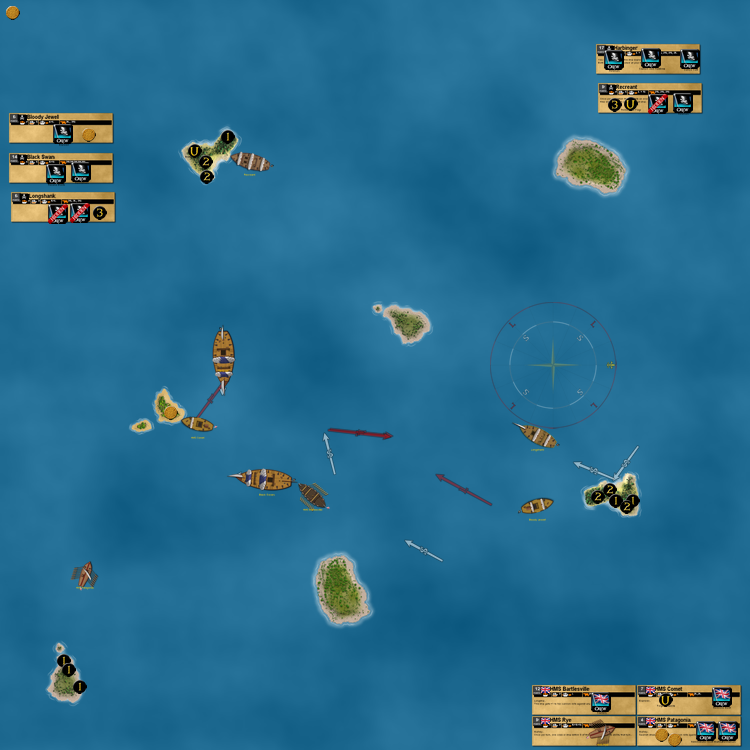 The Black Swan sank the Patagonia and her load of 14 gold! This netted a 1 gold payout from Bratley’s Ransom keyword. In addition, the Harbinger sank the Comet, eliminating the English from active contention! The Bloody Jewel and Recreant speed home. 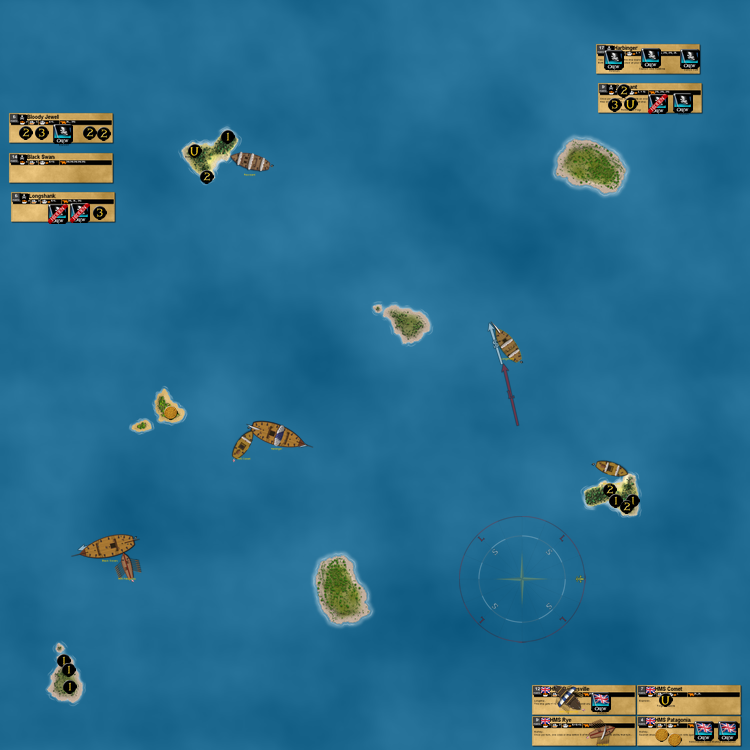 The Harbinger chases down the Black Swan and dismasts her: 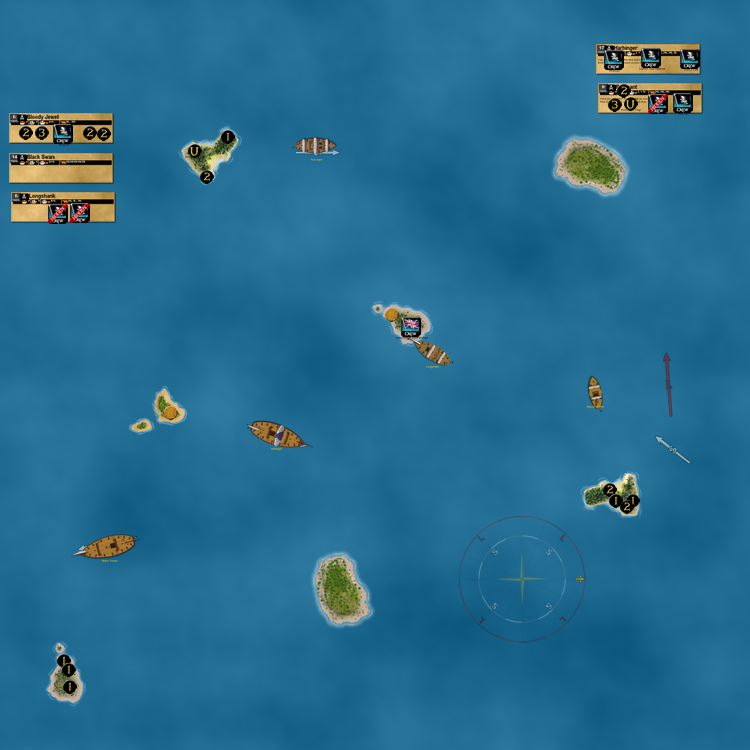 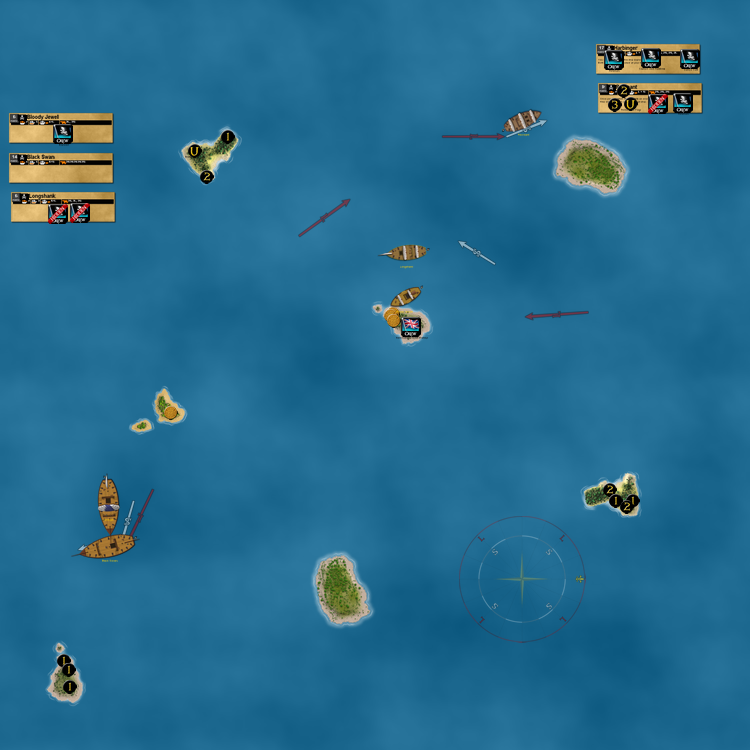 Only Pirates are left on these seas: the Black Swan is captured with the Harbinger’s ability and the Recreant docks home her gold, suddenly giving Nick’s fleet 3 ships at his home island. 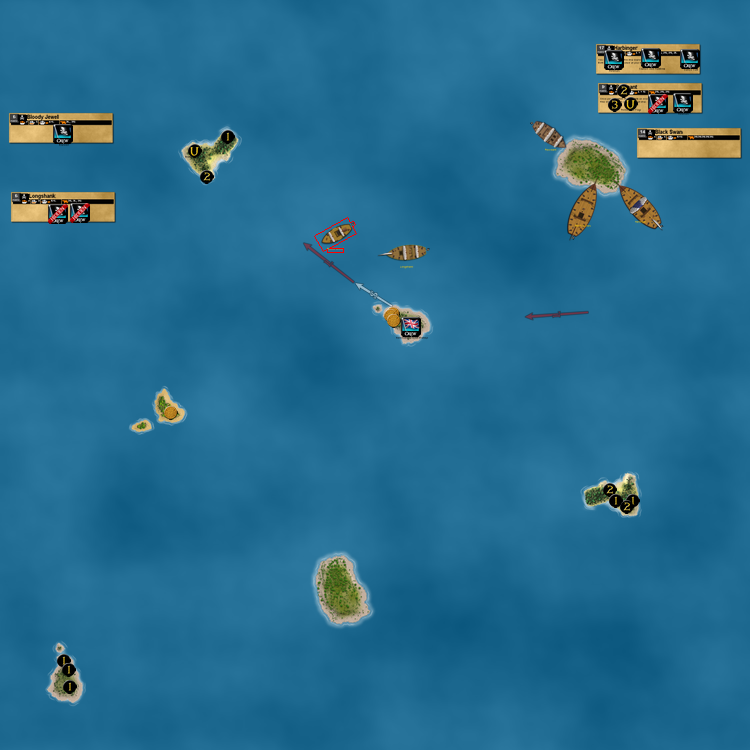 The face down crew were finally revealed, and the Recreant and Longshanks became locked in battle! Morgull missed with his firepot specialist (as he expected to), allowing the Recreant to win the battle soon afterwards. The Bloody Jewel looked for more gold while the two 5 masters repaired. 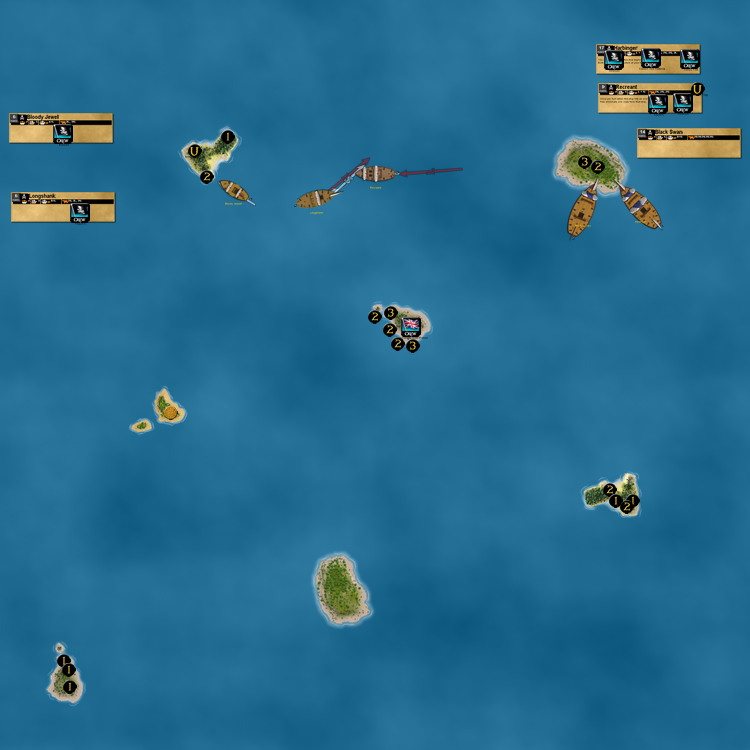 The Harbinger can’t quite reach the Bloody Jewel… 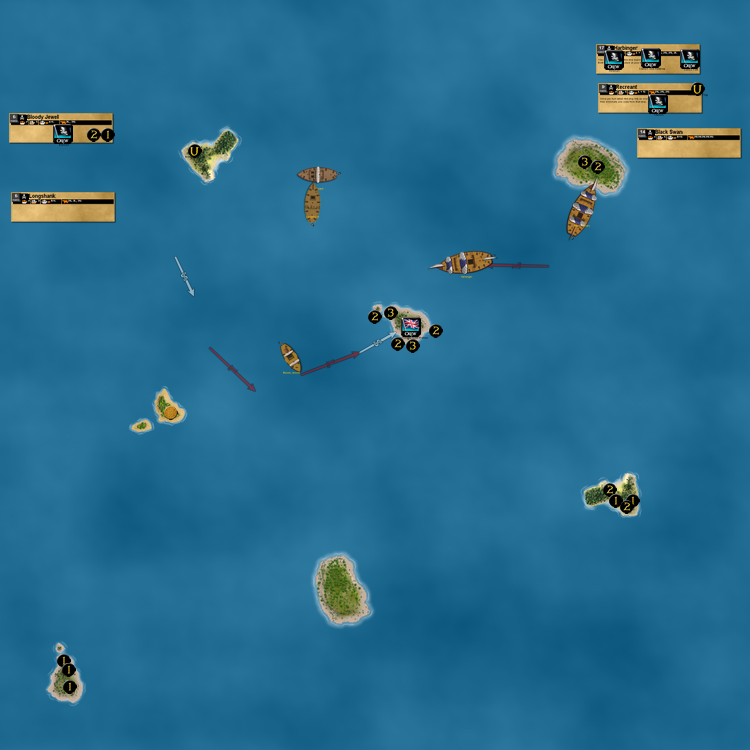 … and the game ends. 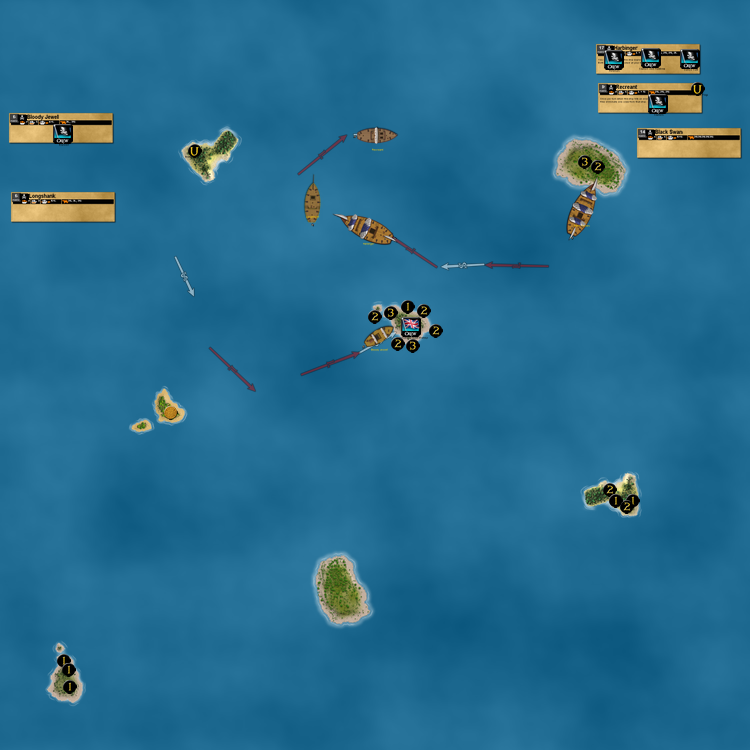 Since Morgull already had 16 gold and Nick wouldn’t be able to get more than 14, Morgull has won his first game on the VASSAL module! It was a great game by all players, with more excitement then you’d expect. The English put up a good fight and had a few miraculous moments, and they would have had 20 gold if the Patagonia had 2 more turns to row home. They were eliminated before the action shifted to a Pirate civil war. If Nick had gone after the Bloody Jewel instead of the Black Swan, the result may have turned out differently, or maybe not. In the end, double actions and big cargo holds won this 3 Player VASSAL Game.

Yesterday (2/12) I won an extremely brief game against hiddenelephant.  Xerecs arrived and we set up for a 3 player game, which will hopefully happen sometime soon.

After resuming T2 and stopping in the middle of the second game for a rules question, we decided to have a quick deathmatch.  My Acorazado fleet was at 29 wins, tied with my HMS Grand Temple fleet for the most all-time.

Xerecs took the Acorazado on with a crew elimination/boarding strategy:

Each of the FD’s hits would eliminate a crew, even if they didn’t eliminate a mast.  Vega and the helmsman were the first to go, but the Acorazado responded by going 3 for 4. 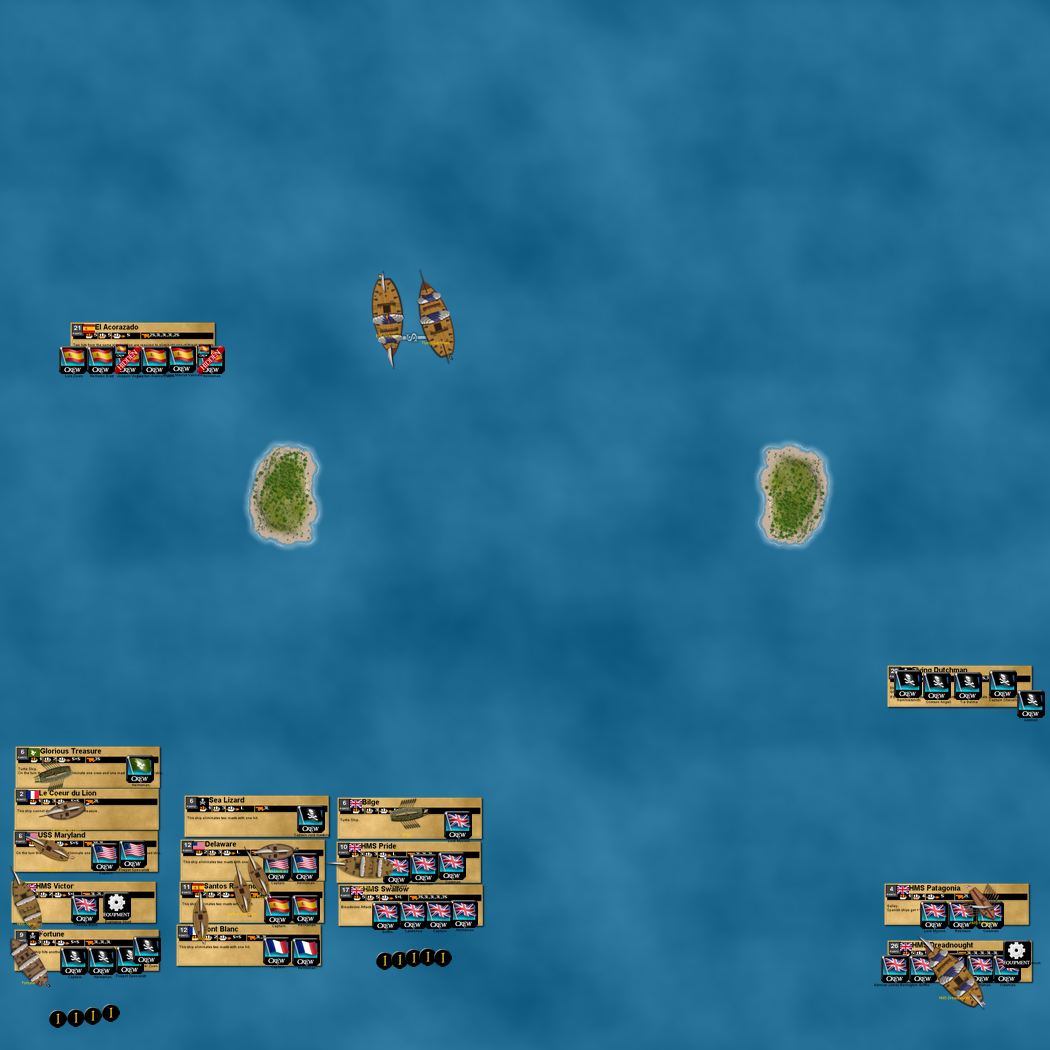 In a big moment, the FD won a boarding party to kill all of the Acorazado’s remaining crew!  This left her very vulnerable, but she managed to dismast the FD.  However, the FD would win the game if she was sunk, because we ruled that Eternal could still work once.  The FD had to be captured, but between her oarsman and the Acorazado’s lack of a helmsman or SAT from Castro, that didn’t happen.  The FD managed to get away to repair, setting up a second clash.  This time the FD won since Tia Dalma was able to cancel the Acorazado’s ability and the Acorazado had no crew to use.  It was honestly one of the most frustrating games I’ve been involved in, not just because I lost, but because there were so many complex ability interactions and annoying occurrences (such as the boarding roll arguably determining the whole game’s result, and the no-win situations that both fleets seemed to be in at various times).  It made me think that home islands should perhaps be eliminated from deathmatches once the game begins (or do away with them altogether), between Eternal being undercosted and the temptation to lurk near your home island so your opponent will come to you. 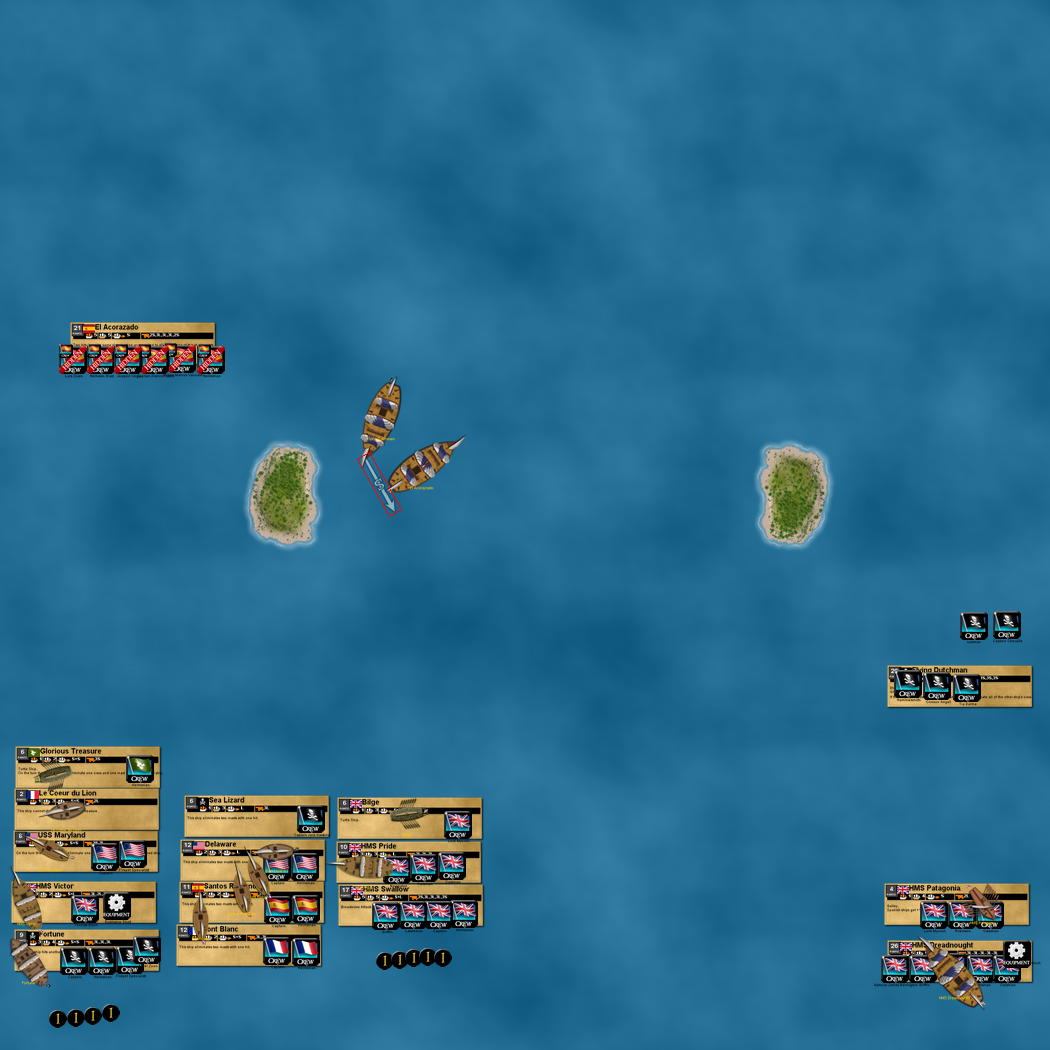