A year after the first one, a second “Other Worlds” game has been played! My opponent was different, but the setup remained quite similar. The fleets were 100 points instead of 80. For a change, the winner of the initial die roll deferred to let the other player go first.

Once again the setup featured home islands in one ocean, with one whirlpool that led to two other oceans where the gold was. 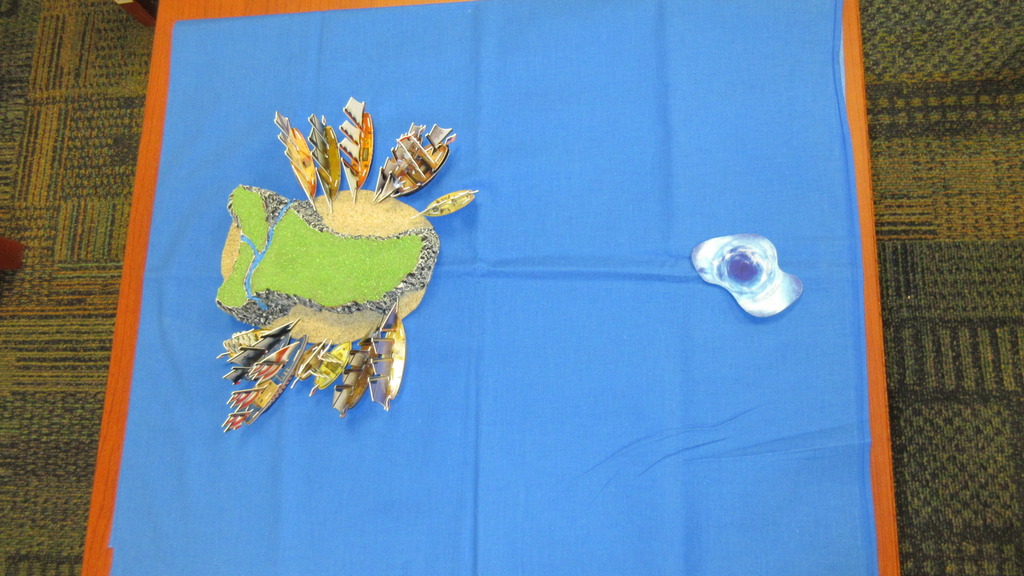 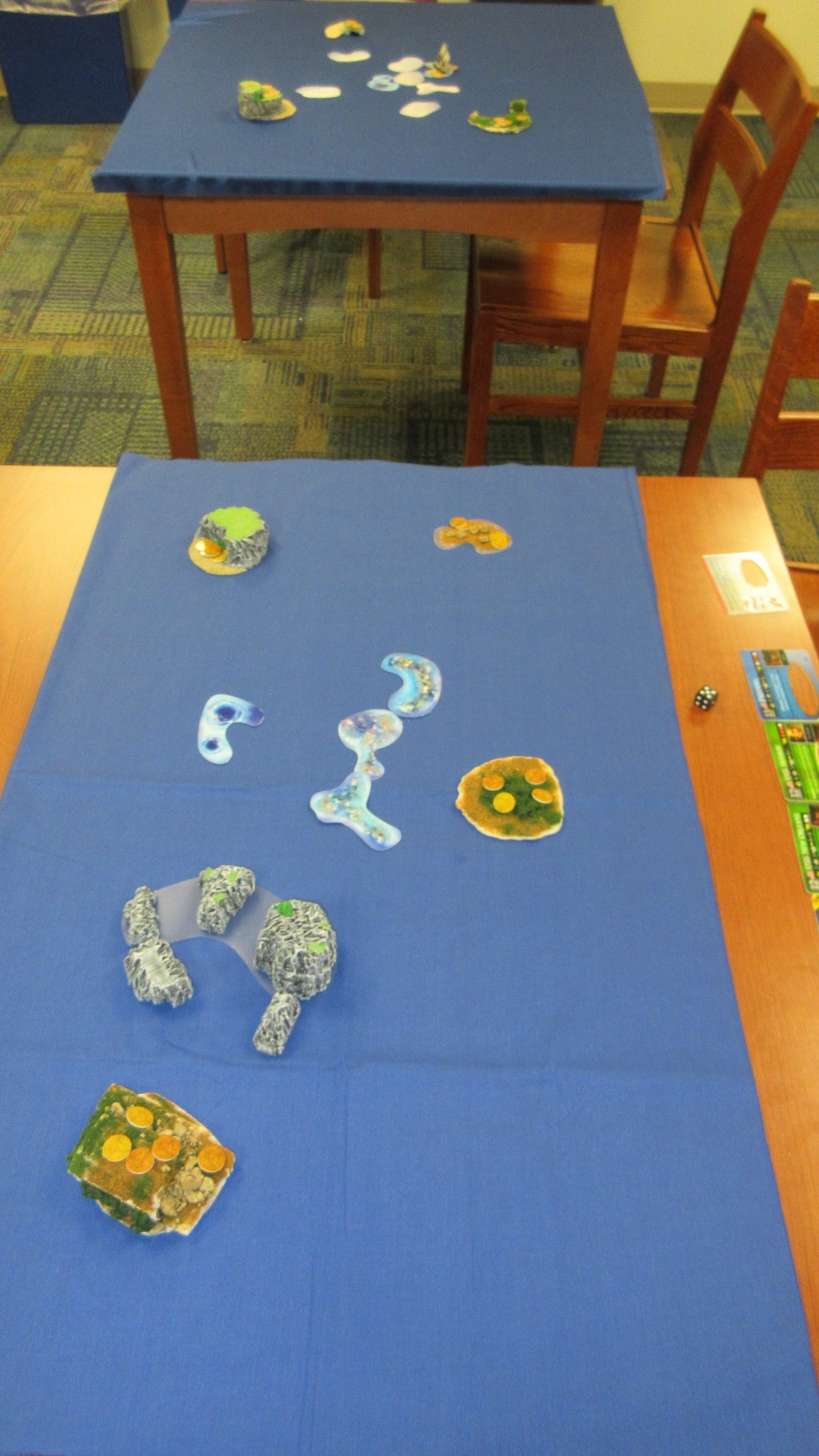 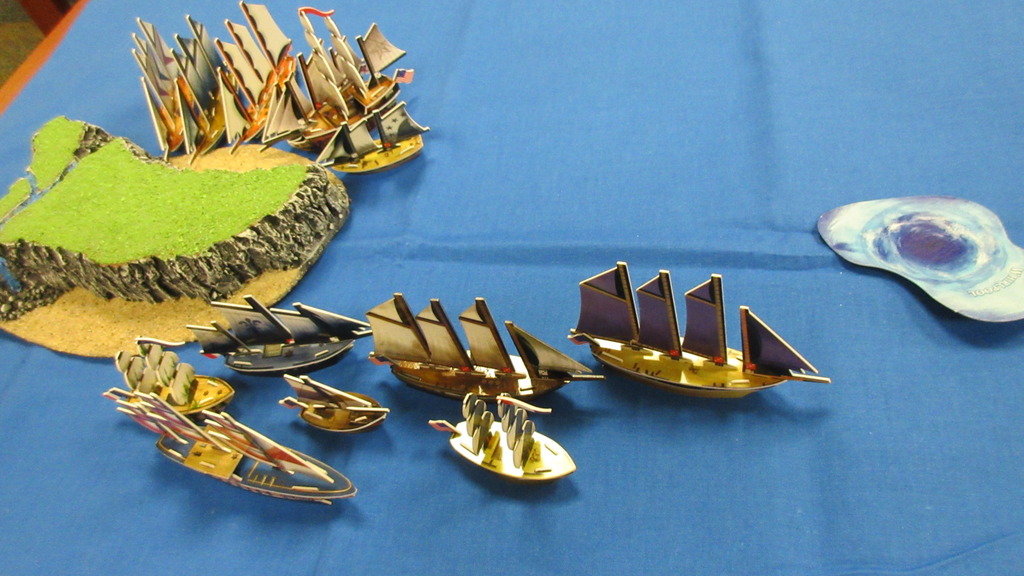 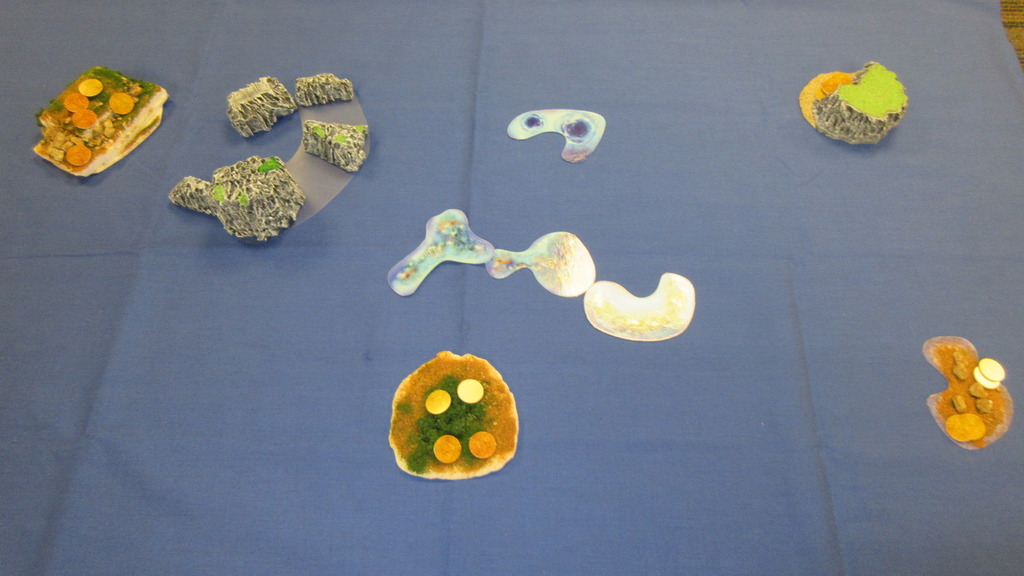 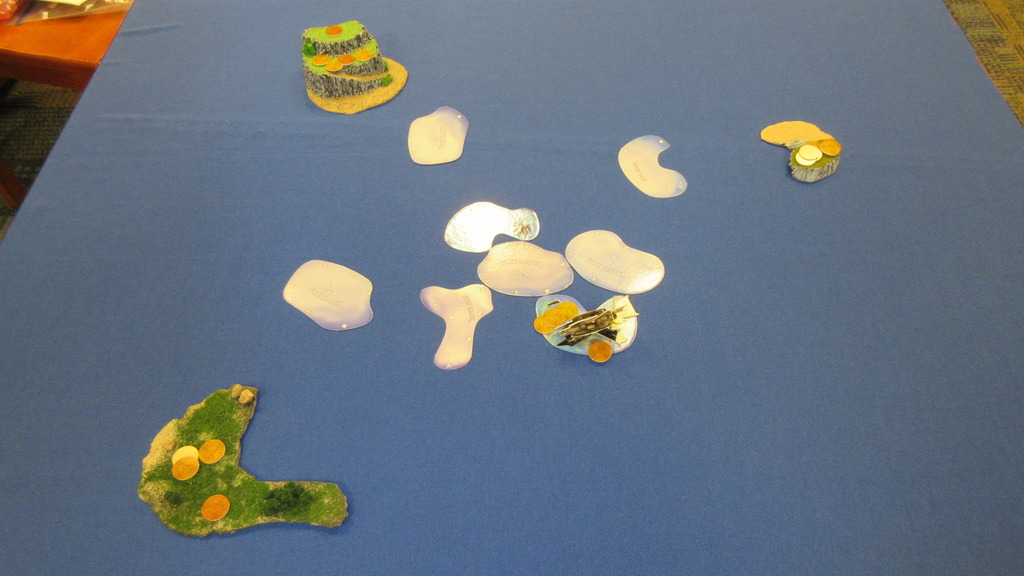 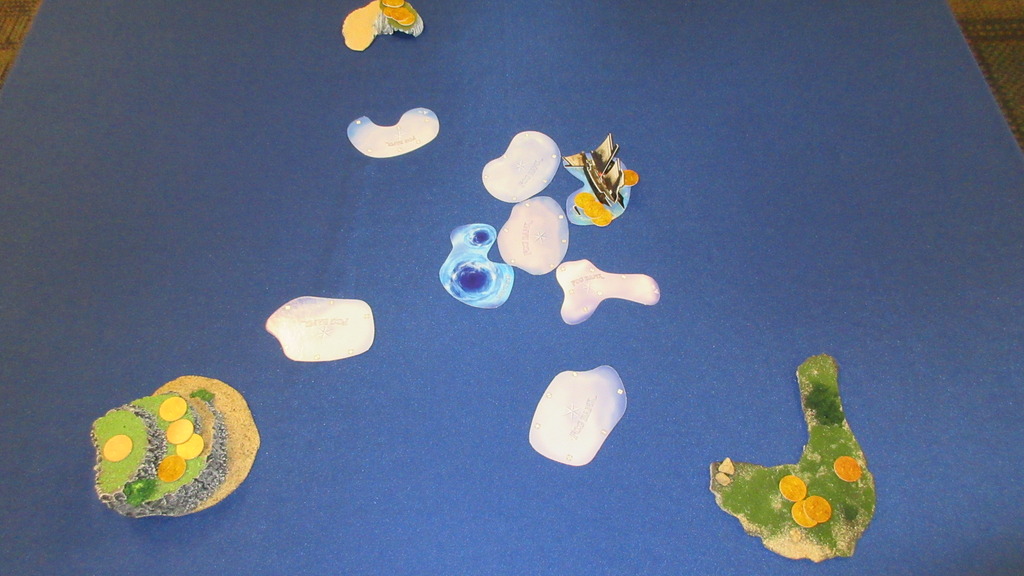 I didn’t have much luck with whirlpool rolls at first, but that changed on the return trip. Many an oarsman were lost on this day. 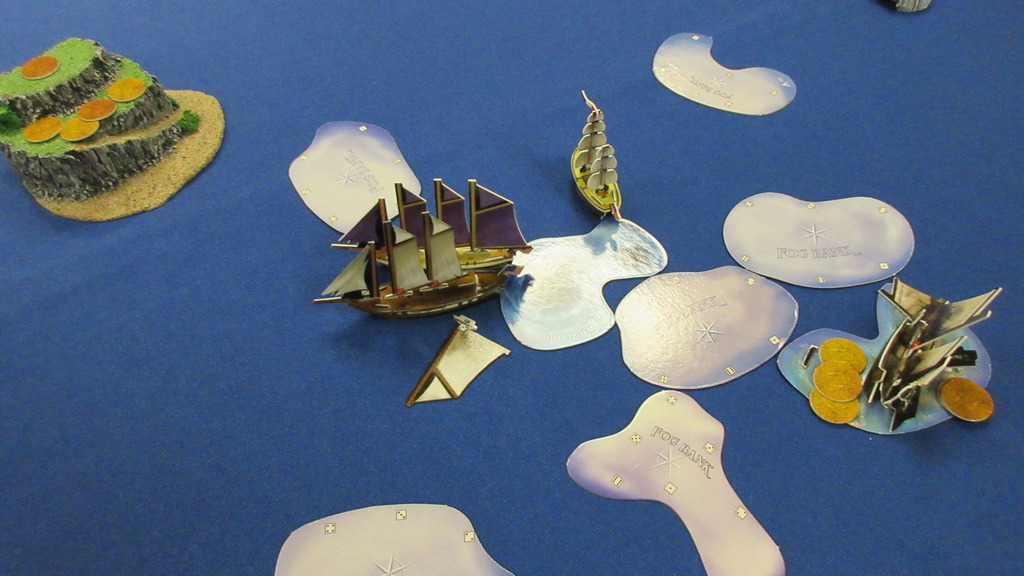 The French Americans were eager to get gold, while the English Americans had a different strategy. 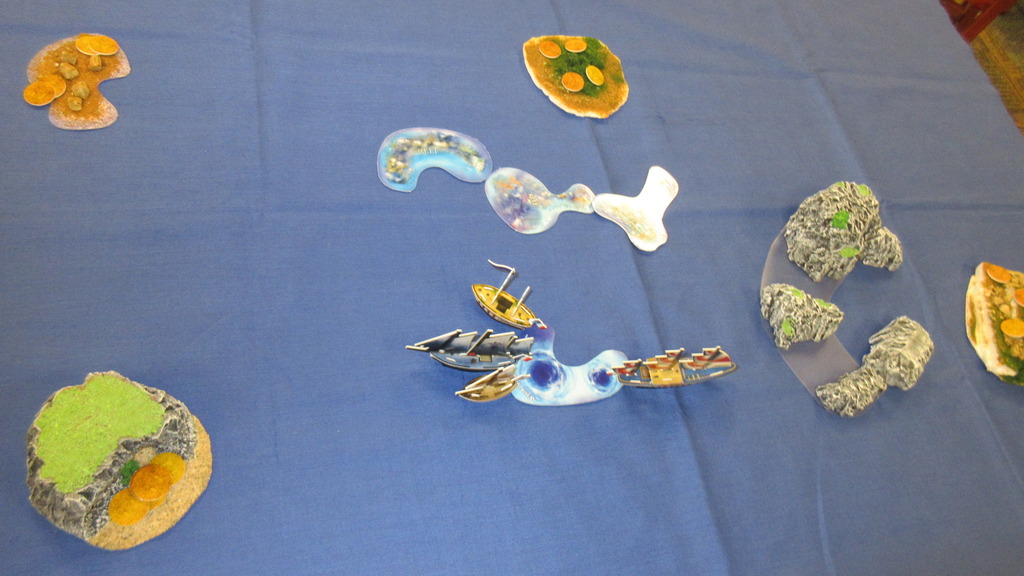 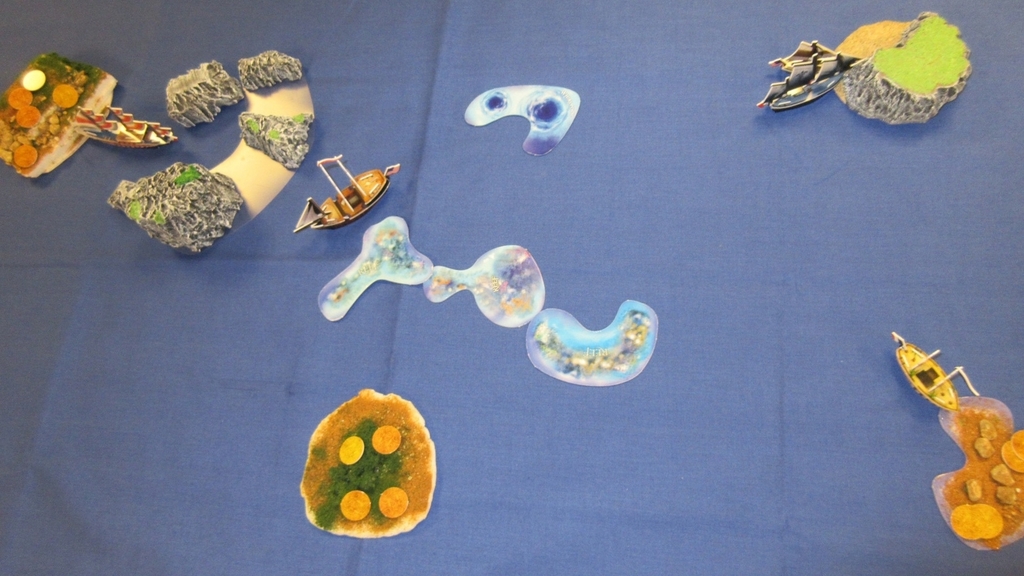 As the Freedom and New Orleans collected gold, the Hudson opened fire on the Henry VIII! 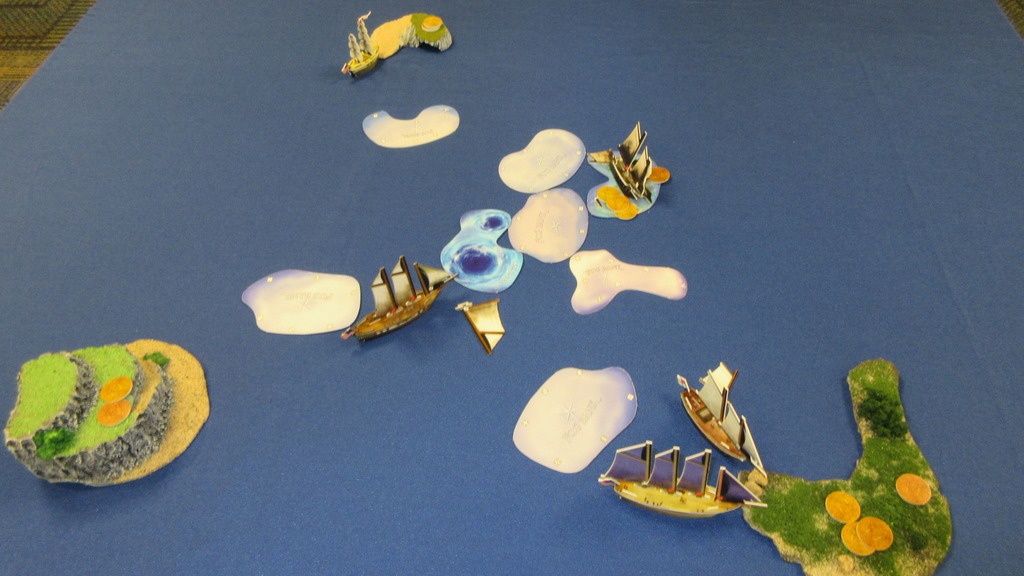 The French Americans were trying to capture the Englishman with the New Orleans’ ability, which may sound familiar… 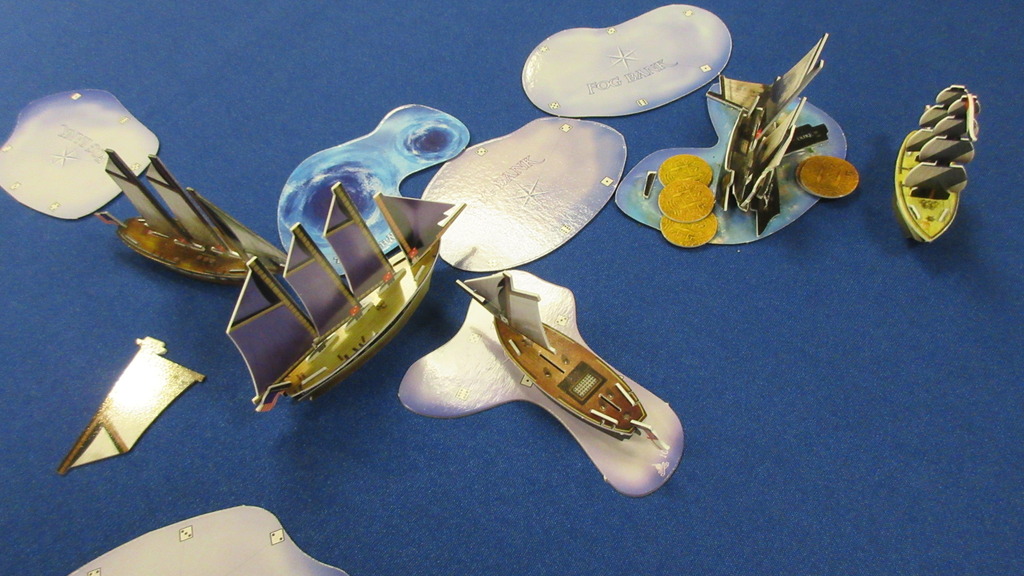 And there it is! I made the apparent mistake of sending the battle report of the last game (linked above) to my opponent beforehand. I assumed it would deter them from trying to use a blockade strategy, but I was wrong. Instead, they were inspired to try it because a blockade understandably sounded and looked cool. Though disappointed, I was just as determined as last time to teach a lesson and deter such tactics in the future. 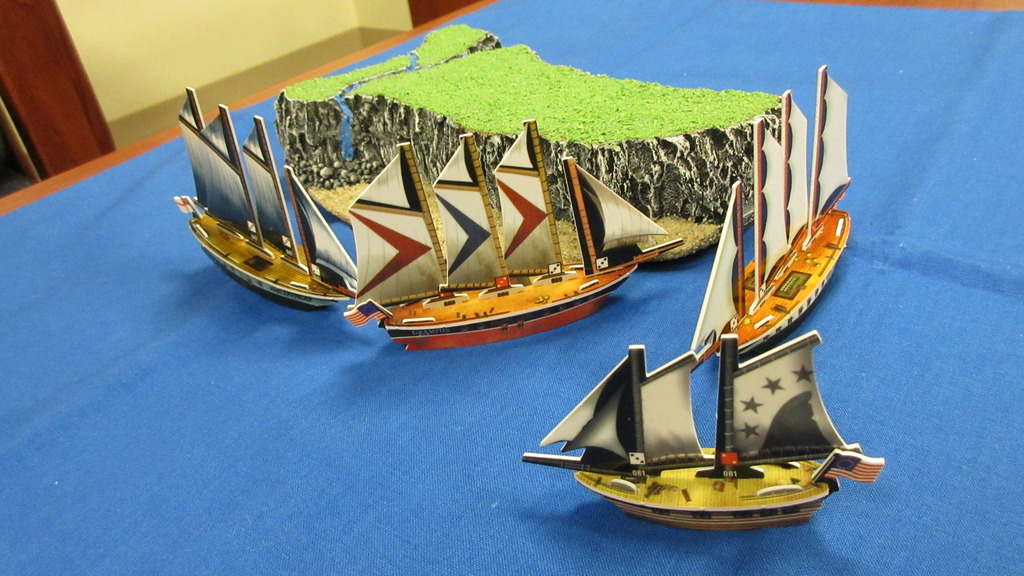 The other ocean saw lots of French American ships collecting lots of gold. 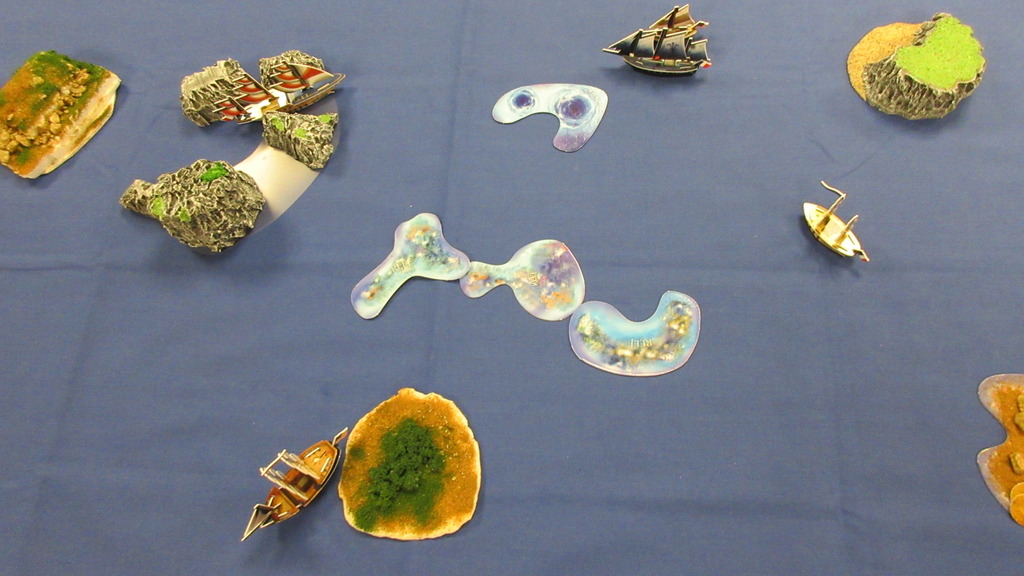 After a few turns of waiting, I finally was forced to return home. The Henry VIII continued to hide in the fog, so the New Orleans gave up her pursuit. 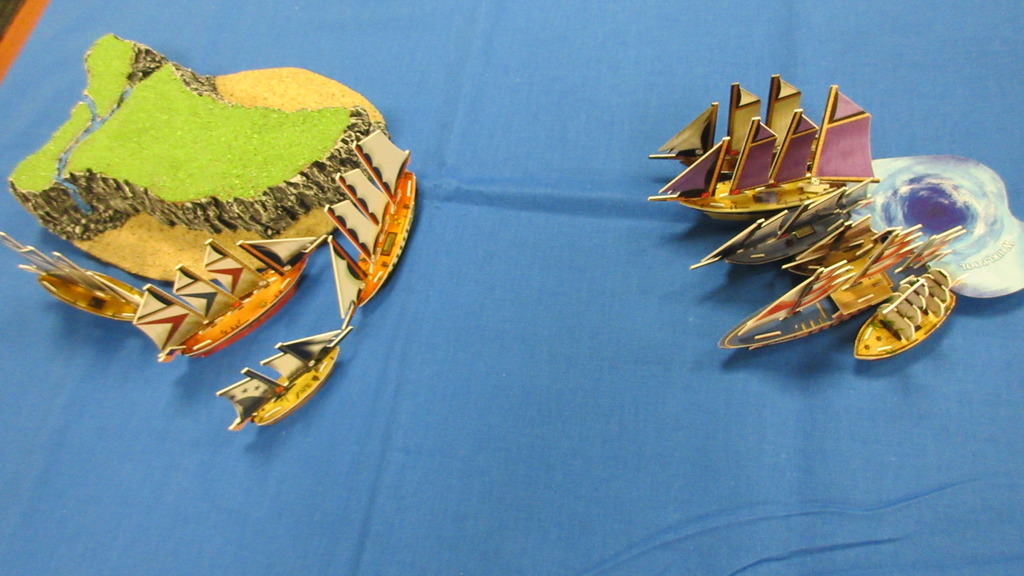 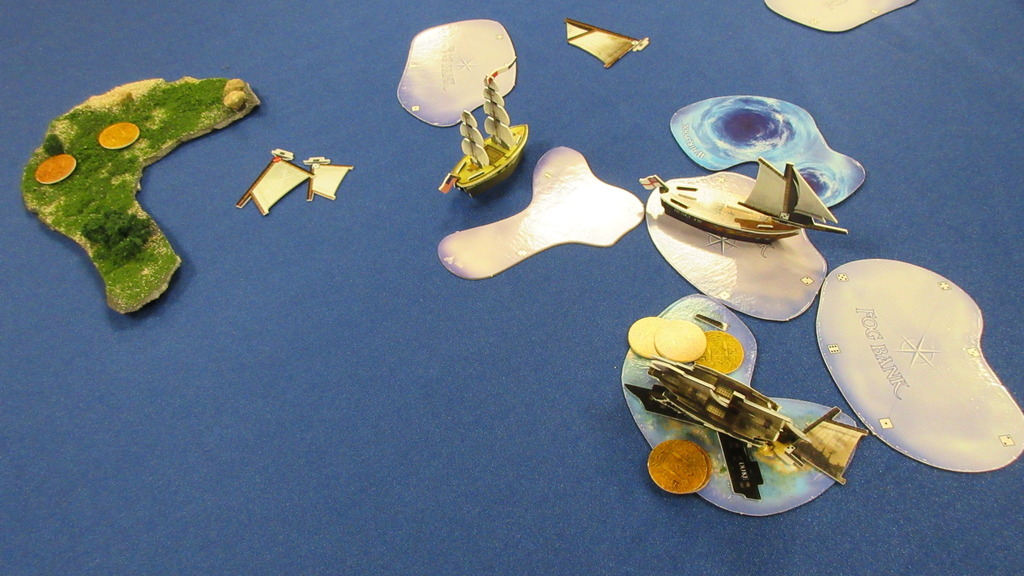 The Freedom started the battle, but missed all three shots. 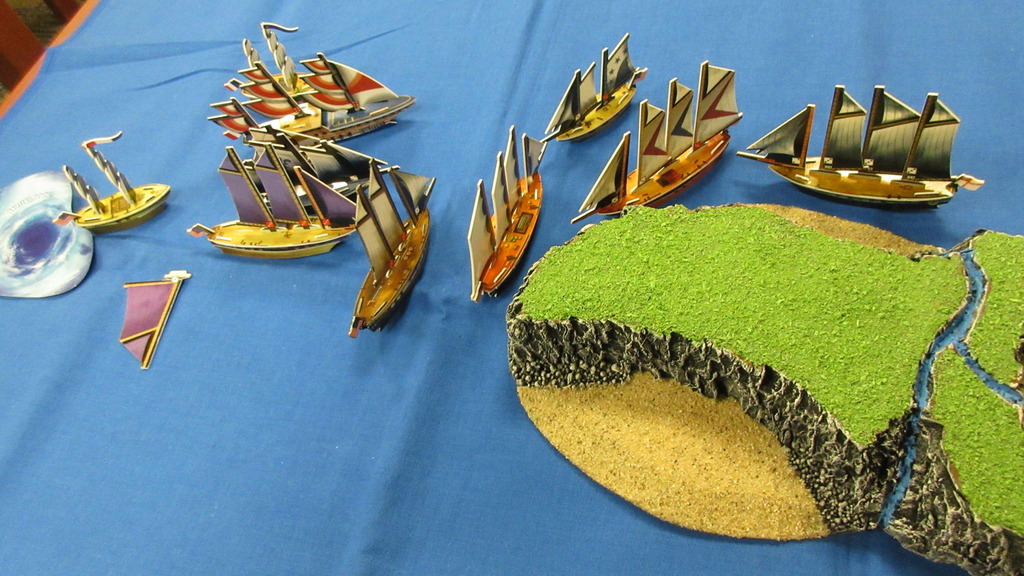 The English Americans brought the Pequod home, and the Hudson and New Orleans pounced! 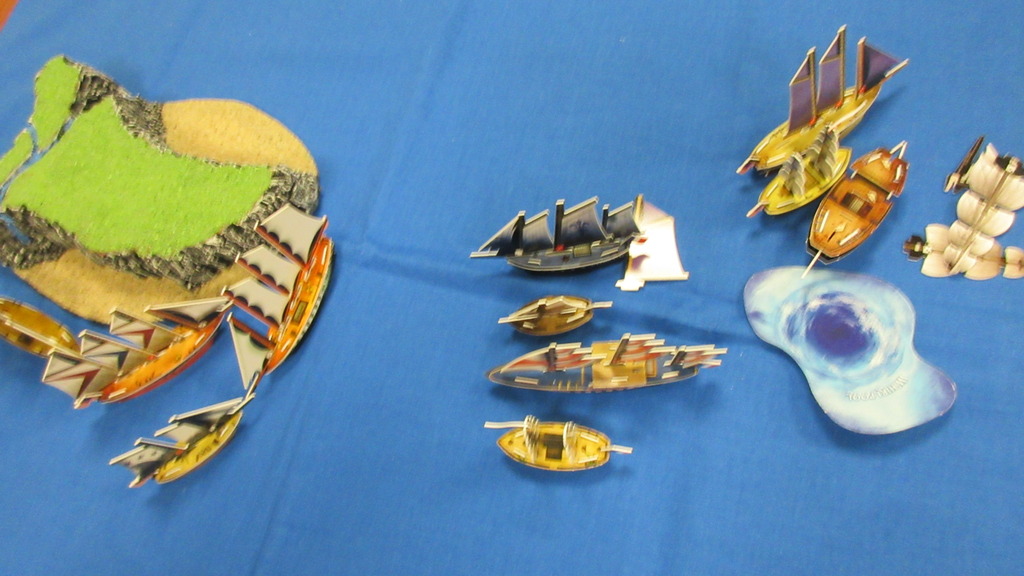 Deja vu! The New Orleans is given an explore action, and she teleports home with the Pequod and all of the gold aboard both ships. However, the Oregon has sank the Freedom. 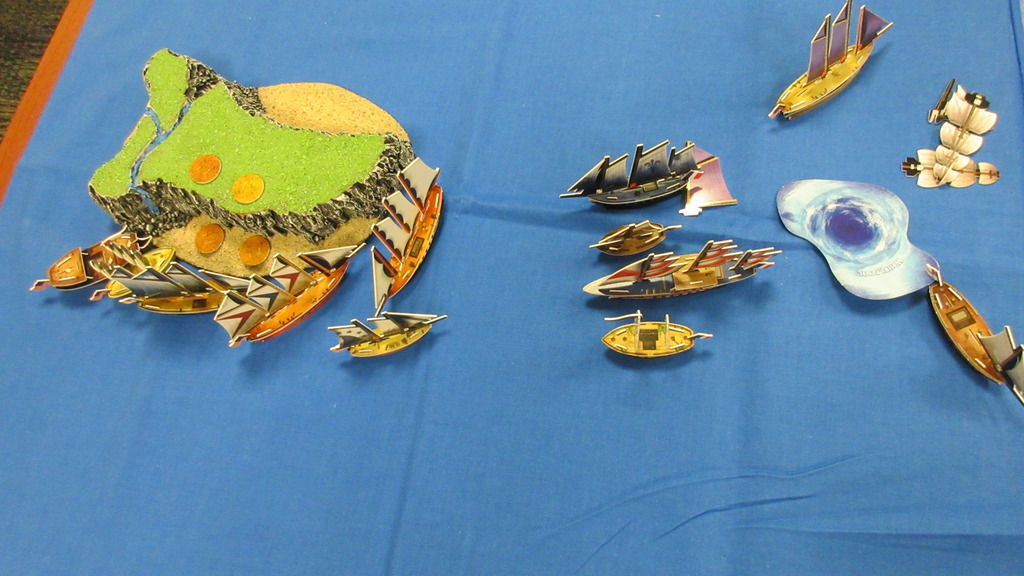 The Oregon and Shark were doing rather well holding off the French Americans, partly because of my typically bad gun rolls. However, the English Americans had a major problem when the New Orleans began shooting at the Dunlap. 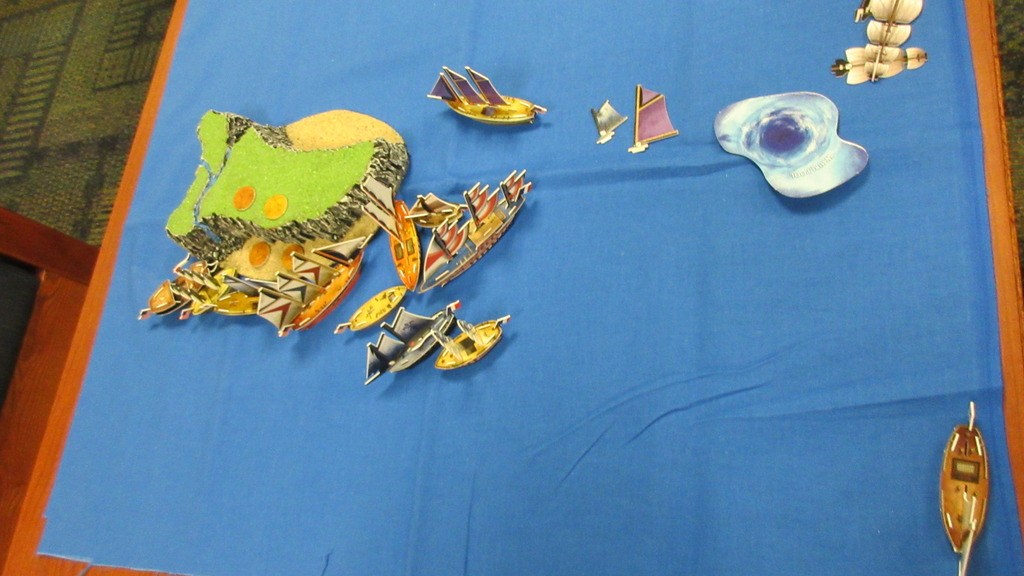 The Libellule towed the Shark to allow the Emeraude to dock home, and the Oregon was sunk. The Grampus sank the Cleopatre, but the English American blockade had failed miserably and they were now fighting an unwinnable fight. 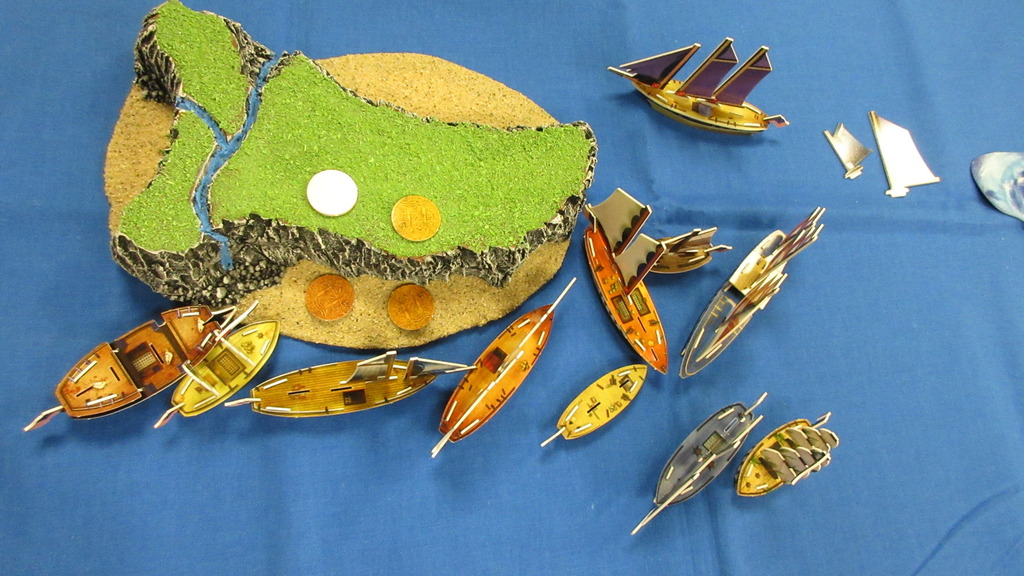 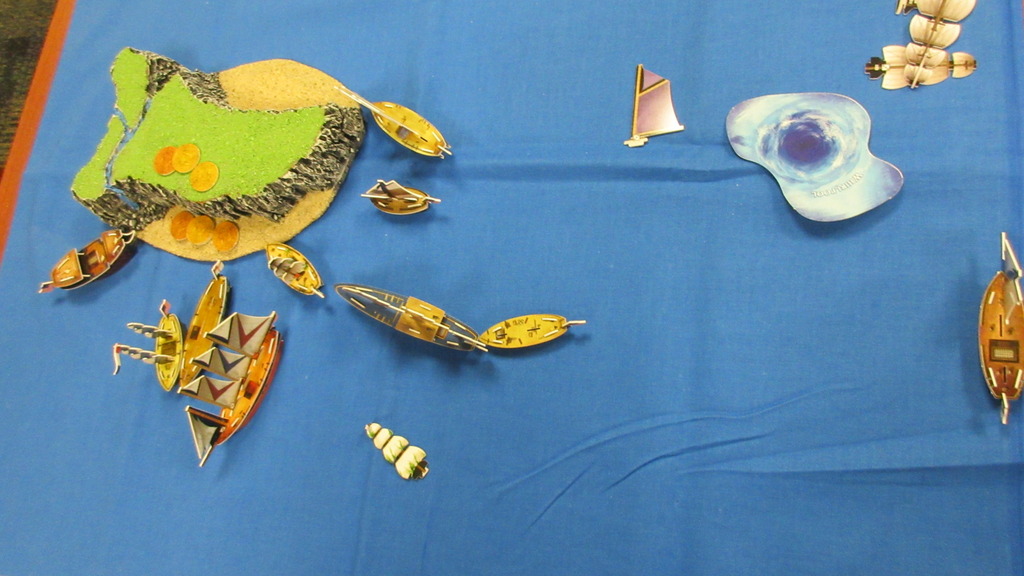 The Hudson took on the Grampus, weakening both ships. This allowed the New Orleans to sail back out and dismast the Grampus, while the other French American ships went after the Henry VIII, who was trying to sneak home. 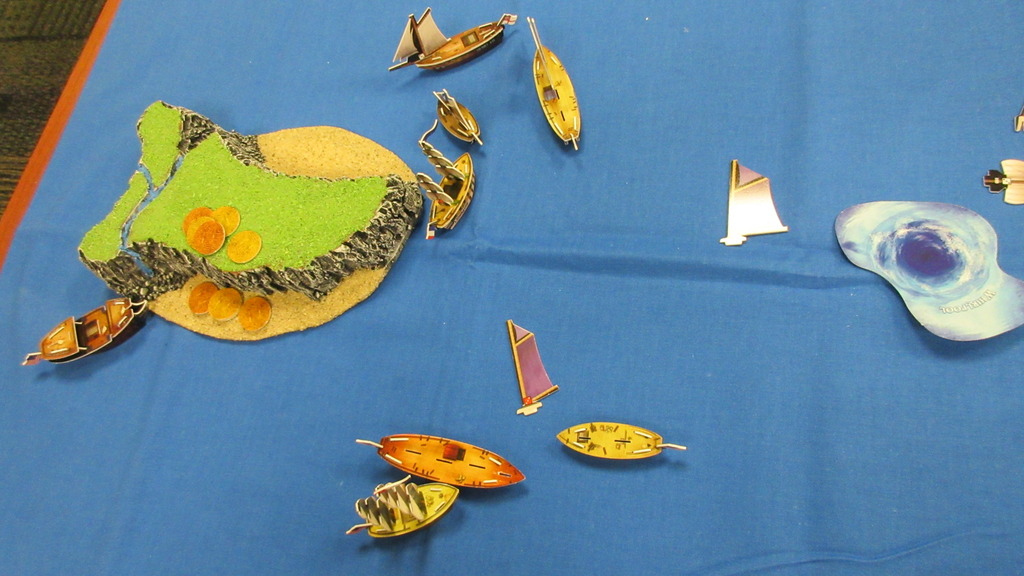 The game ended in an absolute French American victory after they towed the Henry VIII. The final score was 31-0, mirroring last year’s 32-2 score in a very similar game. 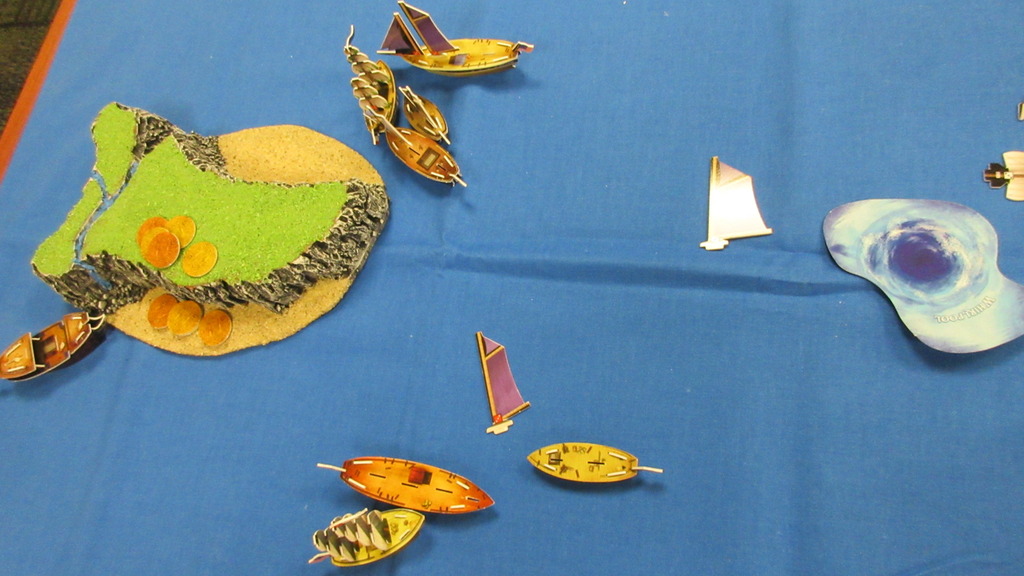 I was disappointed with how similar the game turned out, but it taught me a lesson as well as my opponent. For the next Other World game, I’m going to change the setup a lot, partly to disincentivize the blockade strategy (which seems particularly alluring with whirlpools around!) and also to incentivize more fighting around the wild islands. One idea I have is to make the HI’s on separate tables, and then have all the gold on one table, possibly with each player controlling 2 or 3 independent fleets.

PS: I may get to use one of my 150 point fleets in April, which is exciting. There may be another game this weekend or next week, but other than that, the attention shifts back to the VASSAL campaign games!