The Americans used the Grampus and USS Sea Tiger, while the Spanish Corsairs went with the Pescados de Plata, Halcon, and Sahara. Both fleets had numerous crew on their home islands to start the game. 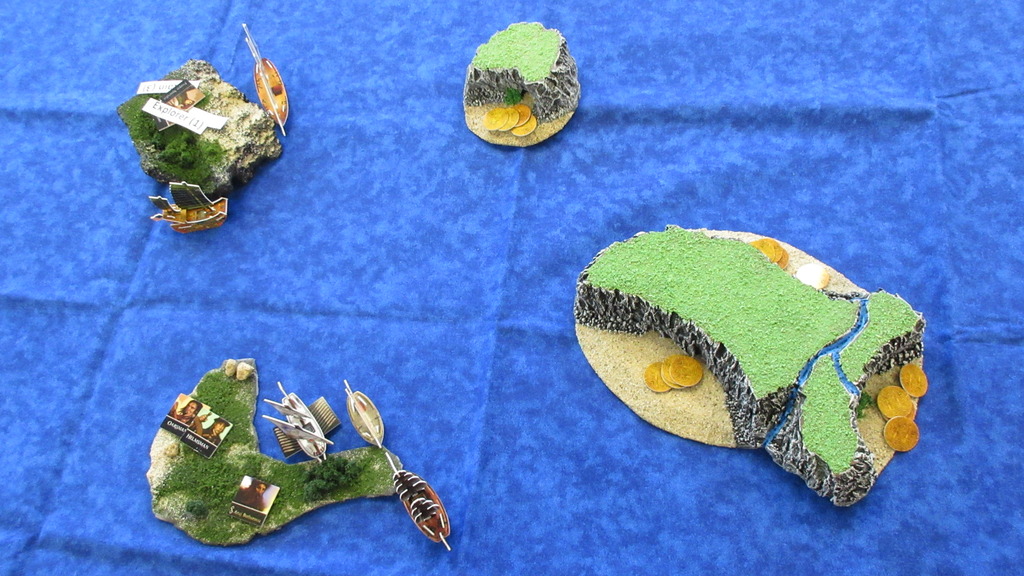 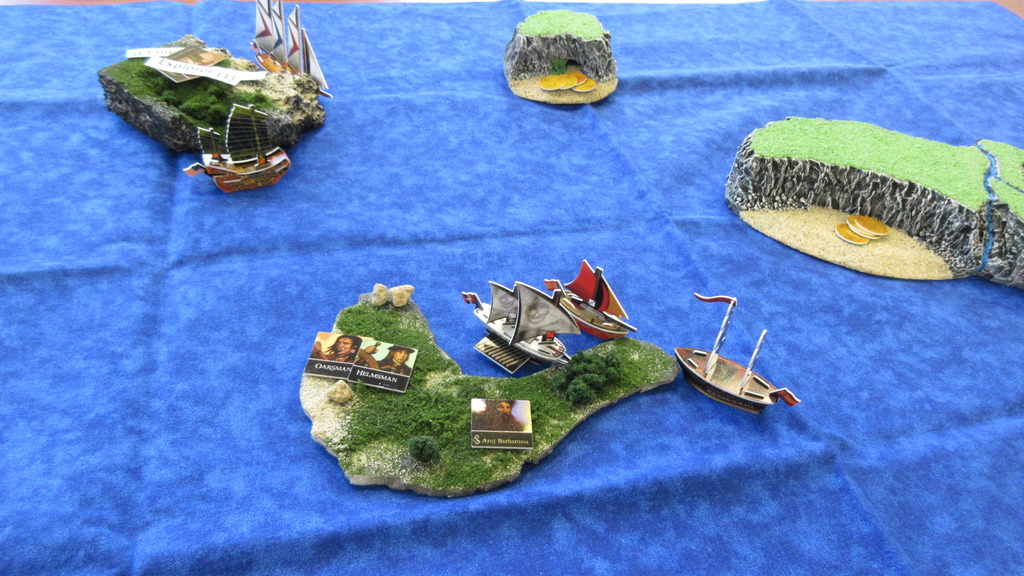 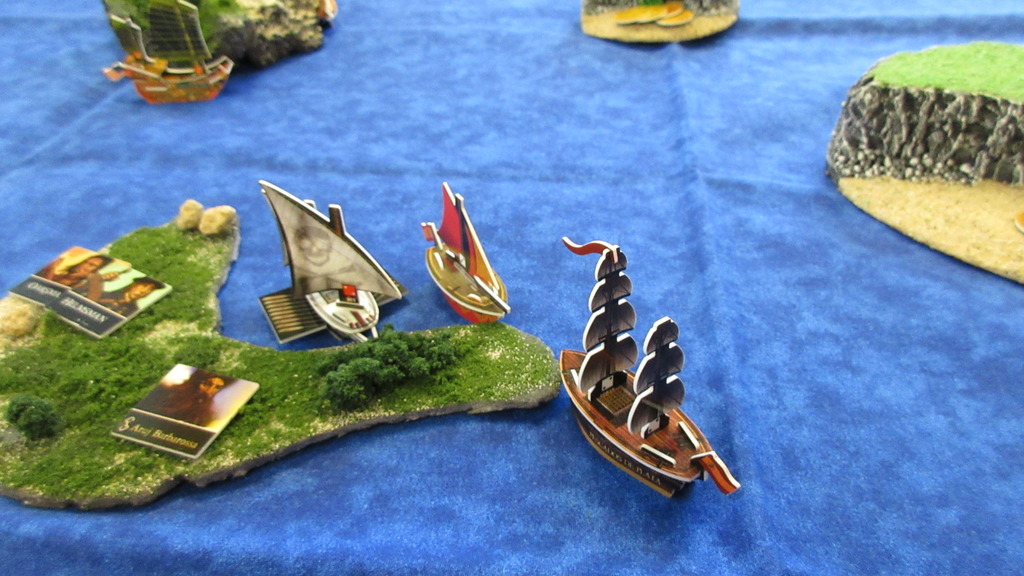 The Grampus got the Americans off to a fast start in the gold game, while the Sea Tiger took out the only opposing gunship. 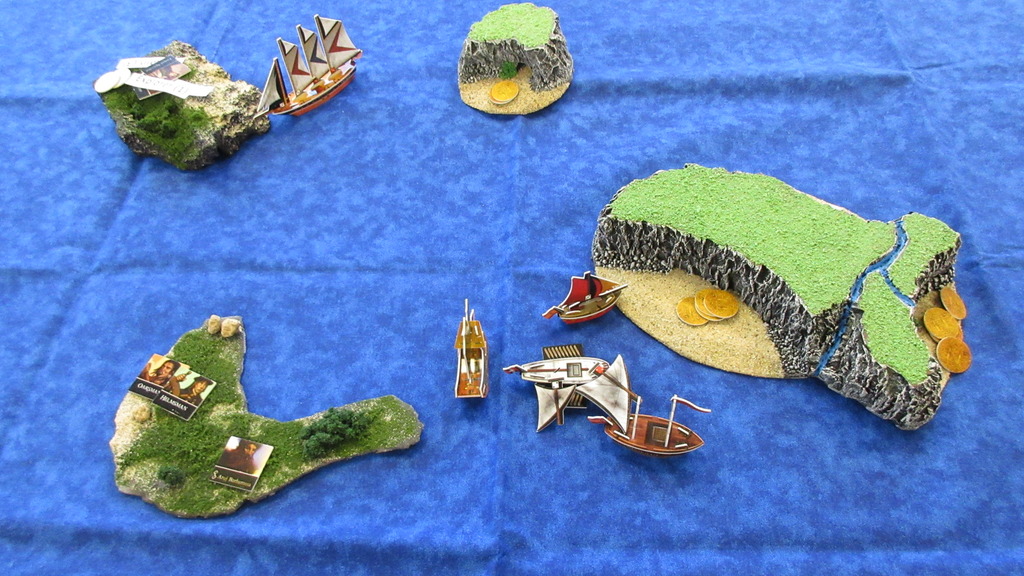 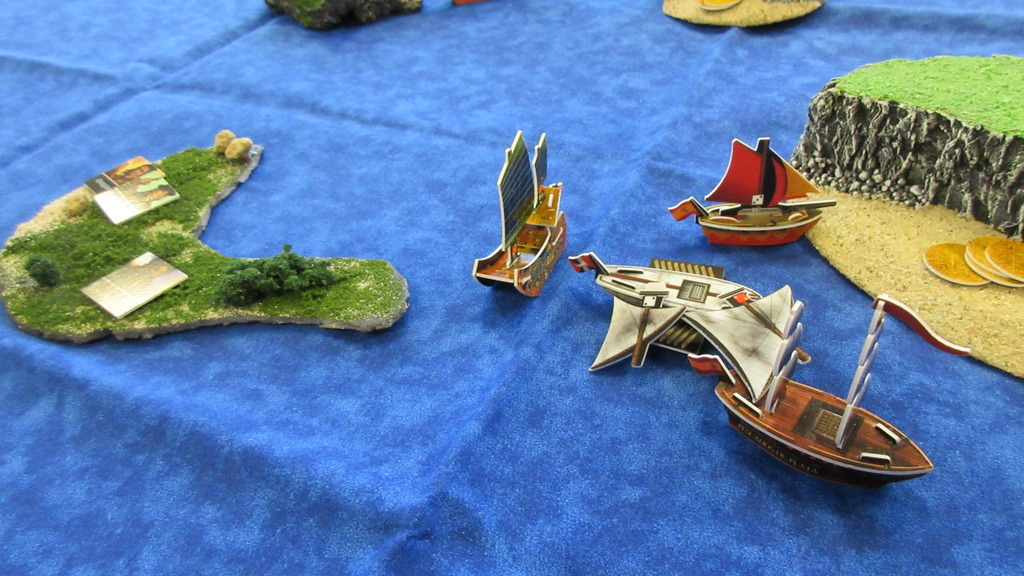 The Halcon tried to run interference while the Pescado grabbed gold, but was entirely unsuccessful. 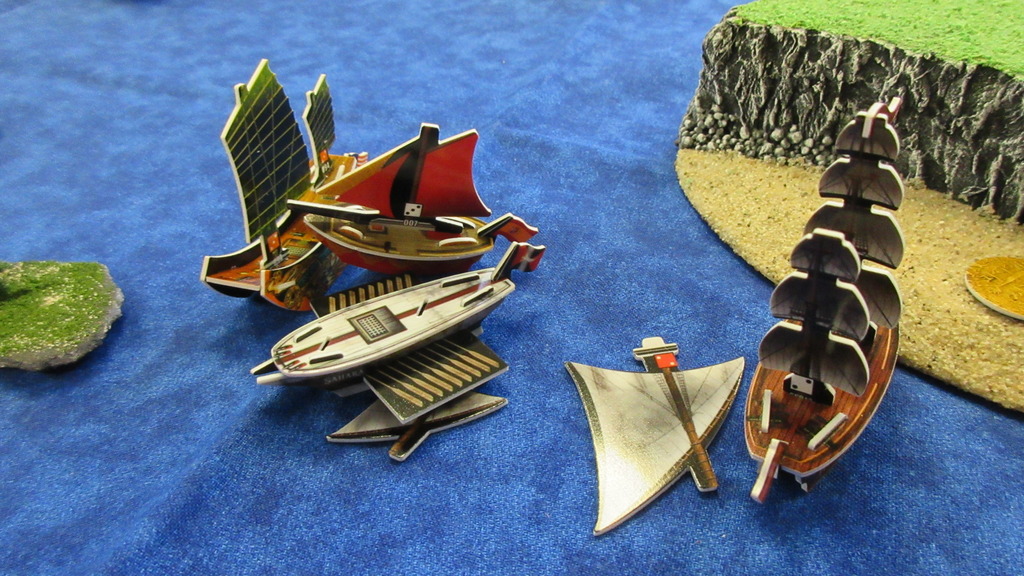 The Halcon was quickly dismasted as well, but the Pescado was able to transfer home some gold with the classic SM-only Master Bianco/Bianco’s Haulers combo. 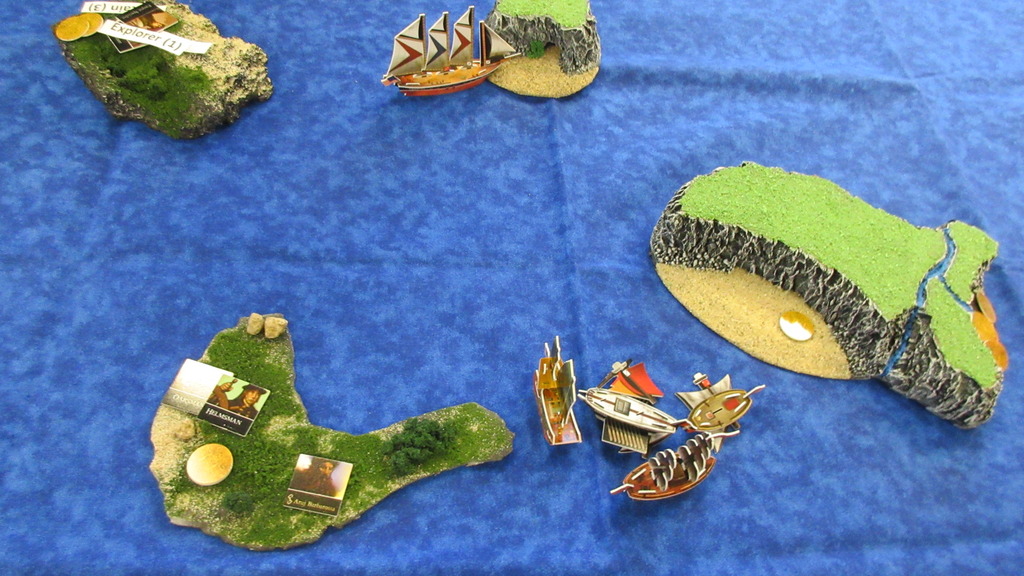 The Sea Tiger continued her assault, sinking the Sahara and damaging the Pescado. 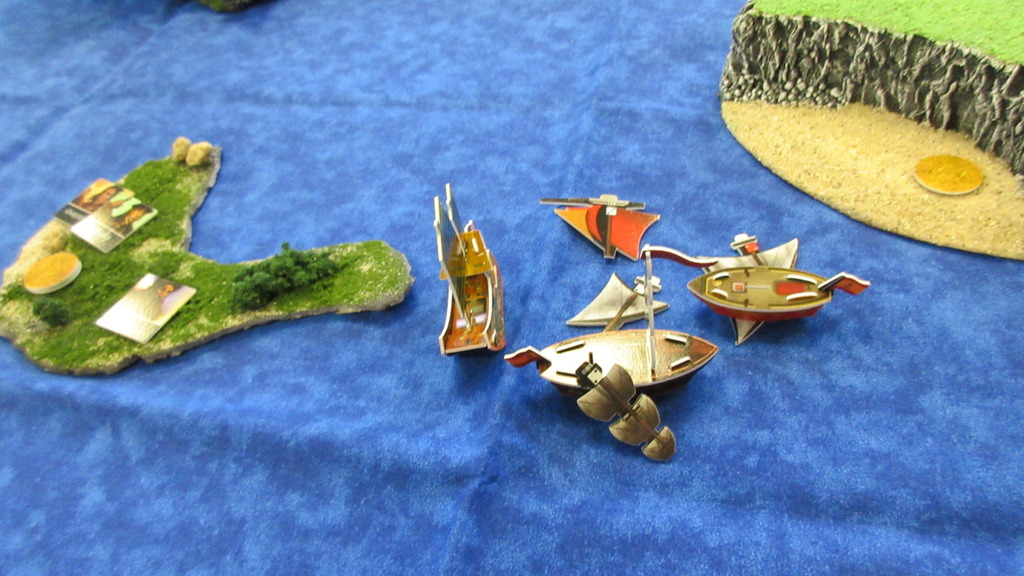 The Pescado was sunk, which technically gave the Spanish Corsairs a 14-10 win. However, my opponent was unaware that the game could end in such a way, since in the past we used the house rule where the rest of the game is simulated to give the lone player the remainder of the coins. As a result, the game wasn’t counted.

The second game featured a setup I had used before, and once again it was a good opportunity to bring out my Viking ships. This time, I used two new ones I got in a trade: Wodin and Donar, with the Grand Mountain taking up the other 6 masts. The Americans stuck with the Grampus and Sea Tiger, adding the Pequod. 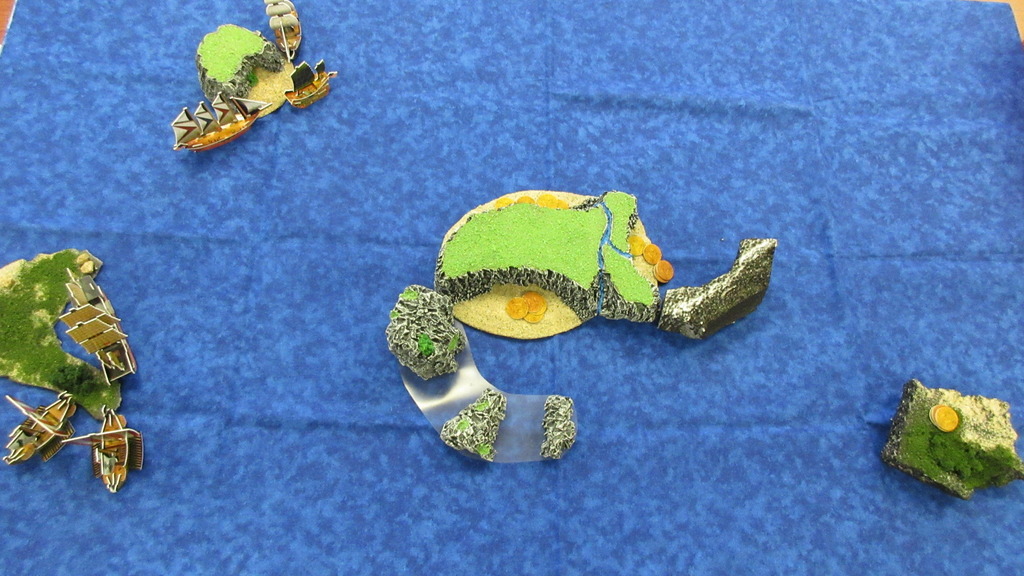 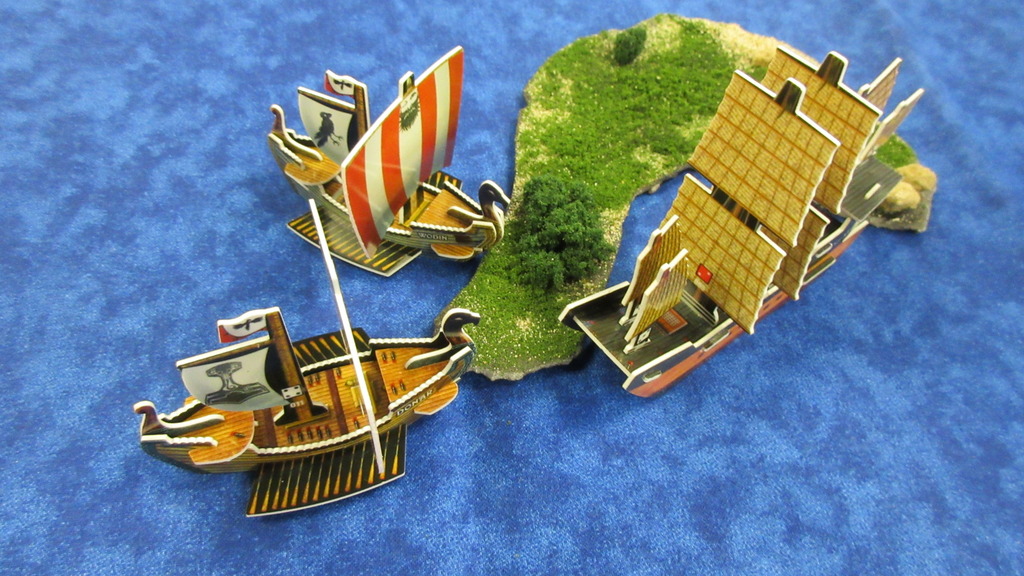 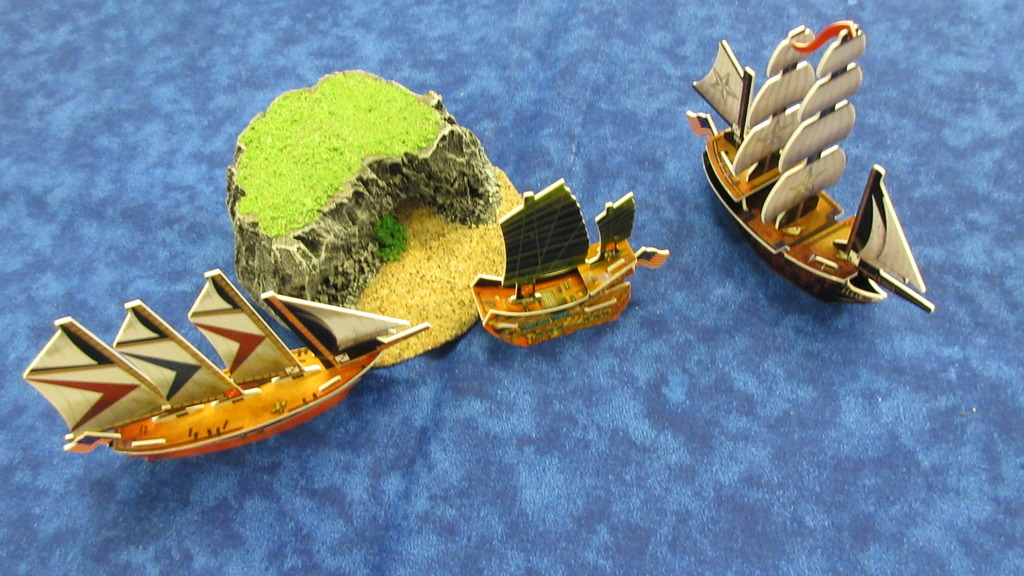 The Grand Mountain and Grampus quickly engaged, pitting the two flagships against each other. 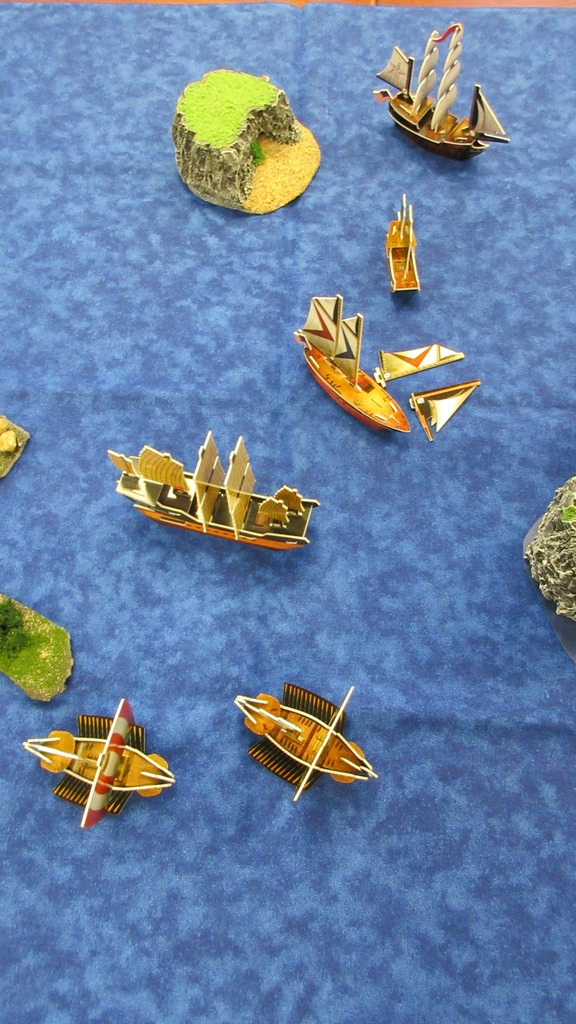 The Grand Mountain won the battle of attrition, but couldn’t capture any crew with Dragon Eyes. 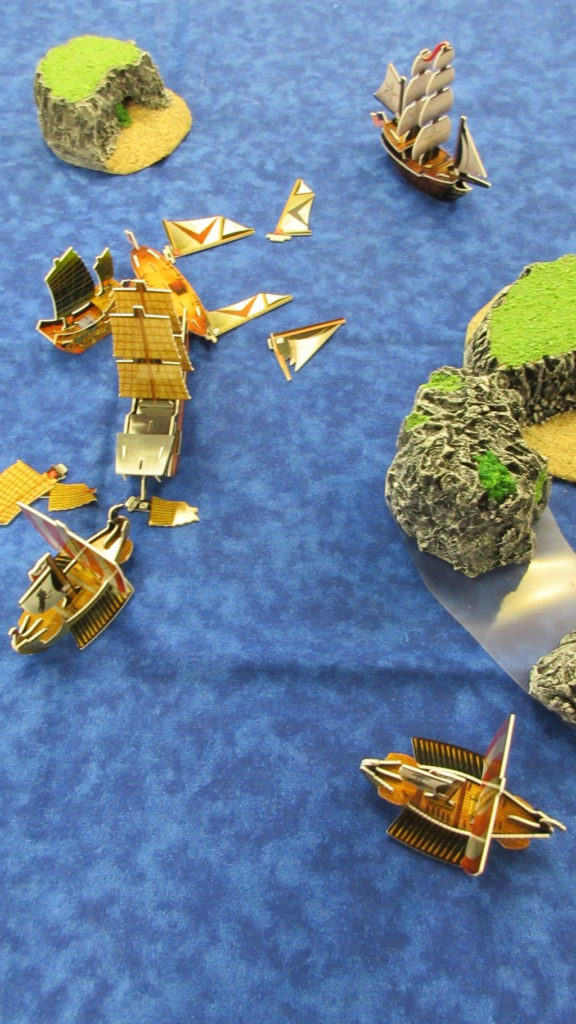 The Donar was going long, far to the east, while the Sea Tiger and Grand Mountain battled it out. 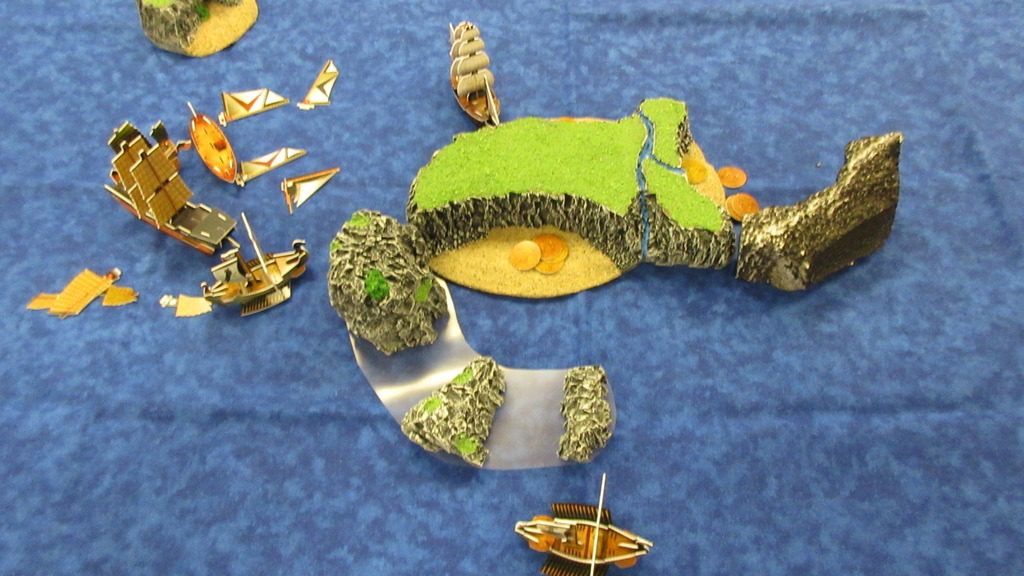 The minor faction alliance appeared to prevail, but unsurprisingly, my horrid die rolls ruined the day for my fleets. 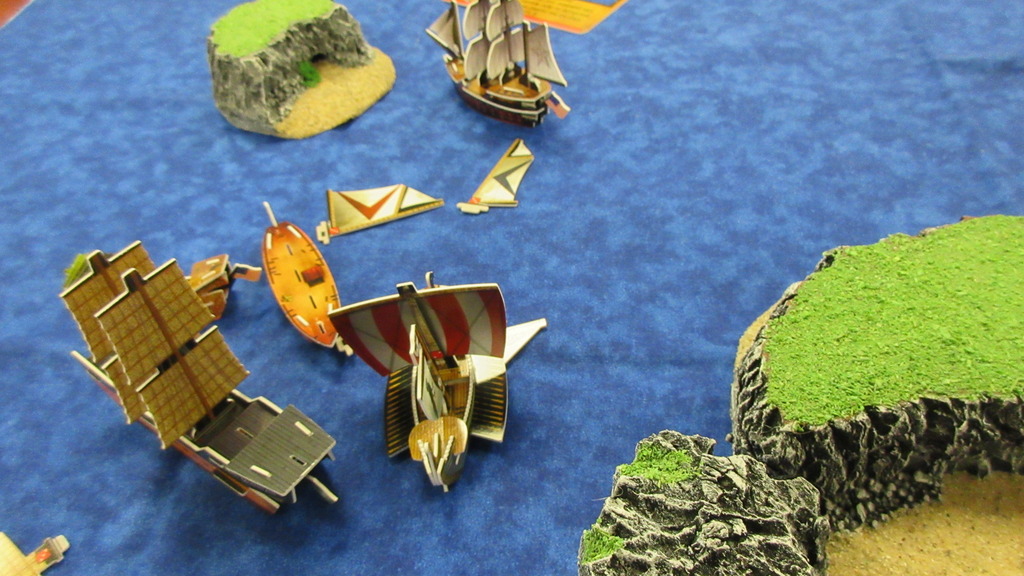 The Wodin managed to snag Diamond Nelson Turner off the Grampus, but Dragon Eyes and the Jade helmsman had fallen in other boarding parties, which meant that the mighty Grand Mountain couldn’t capture any crew. 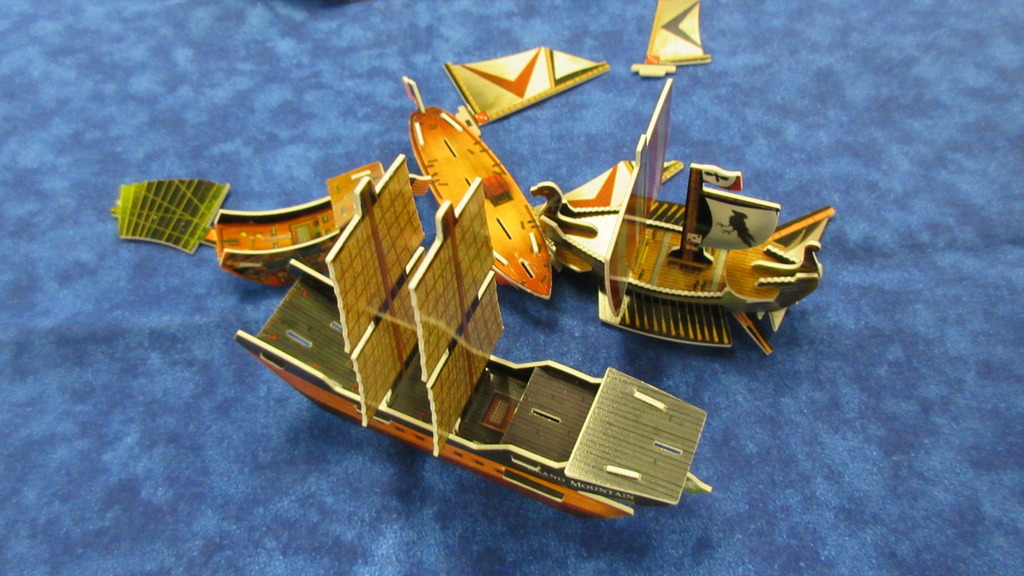 The Grand Mountain was able to sink the Sea Tiger and run interference for the Wodin, but the Pequod was coming! 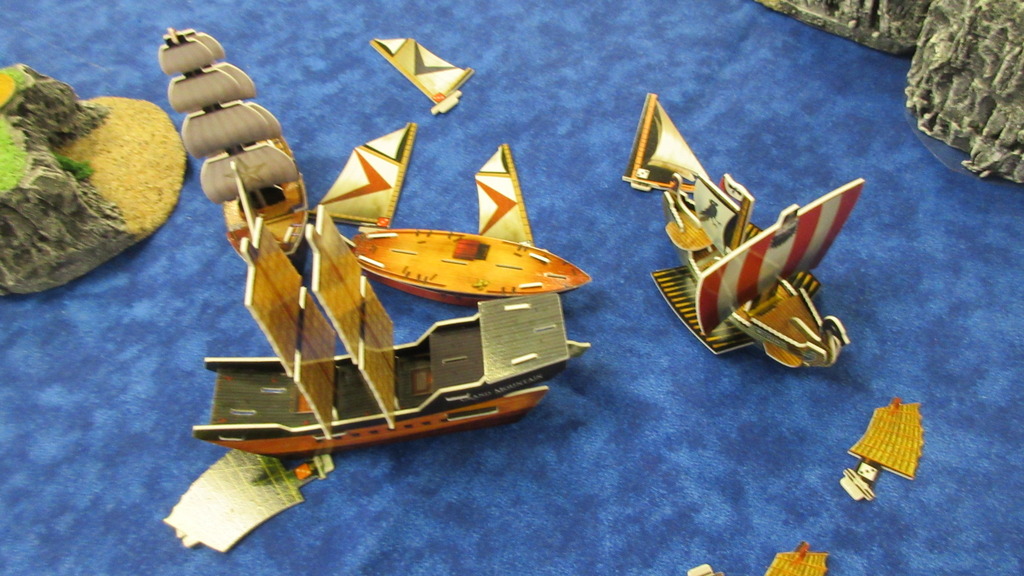 The Pequod began her reign of terror, first dismantling the Grand Mountain. The Donar has begun her voyage back. 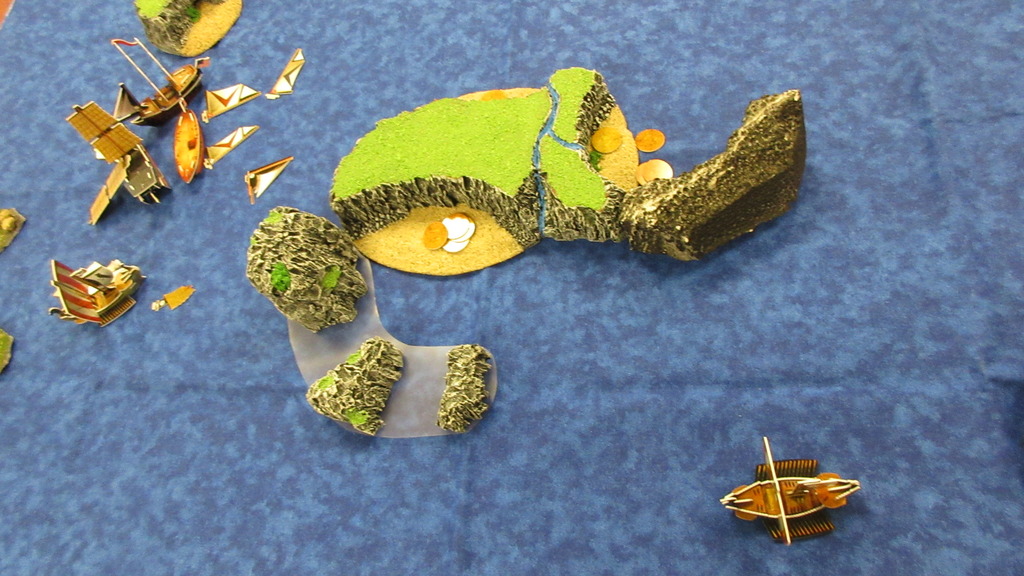 The Pequod then crushed the Wodin and killed Shayna Deux: 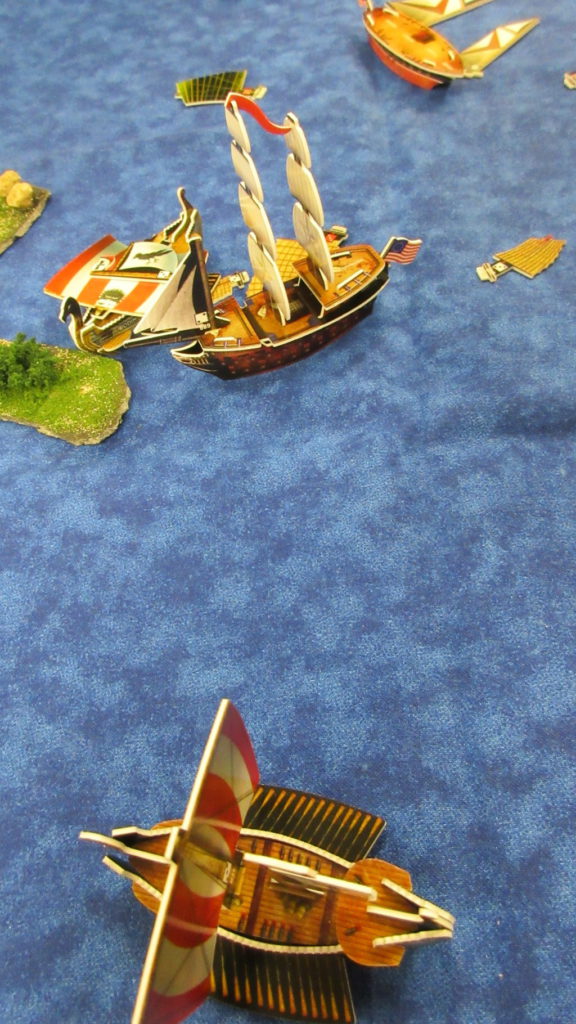 The Pequod then captured the Donar and prepared to fight the Wodin once more. 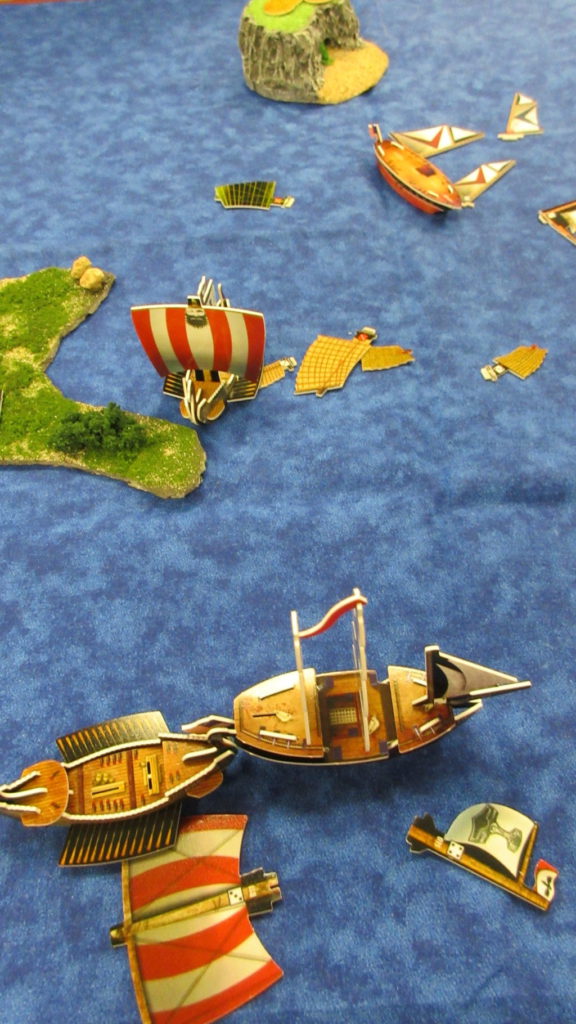 Without a captain, the best the Wodin could do was ram the Donar and hope to steal gold. This allowed the Pequod to dock home her prize. Then the Pequod sailed back out and predictably dismasted the Wodin once more! 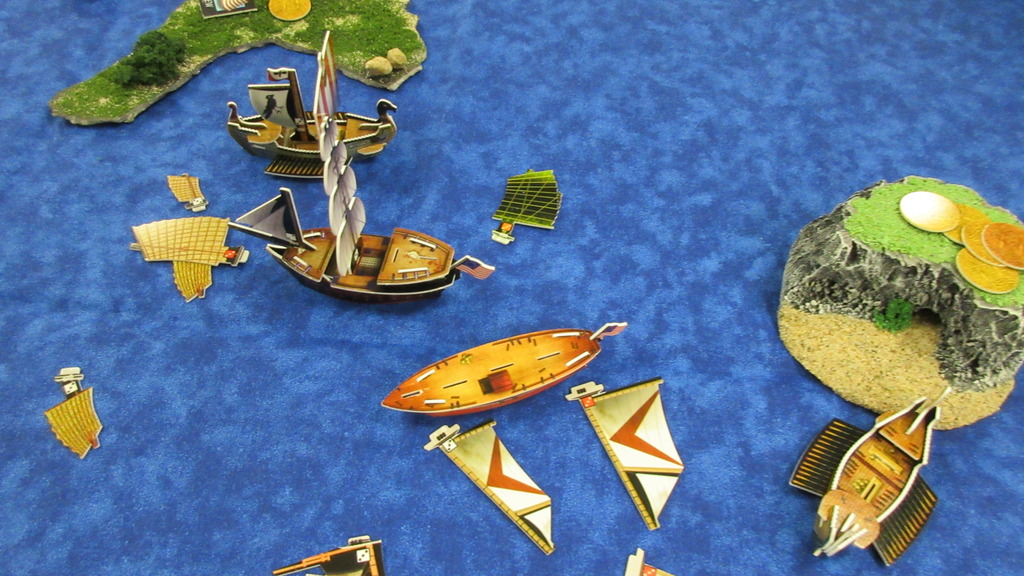 The Americans ended up winning 25-15. The Viking Rebels were only able to get 15 between Turner (worth 8 gold) and a stolen 7 from the Donar.

Since we were running out of time, for the last game we decided to choose the most simple option from the table rather than rolling.

The Americans relied on the Grampus and Sea Tiger, while the Corsairs made a return with the Nubian Prince and Sahara. 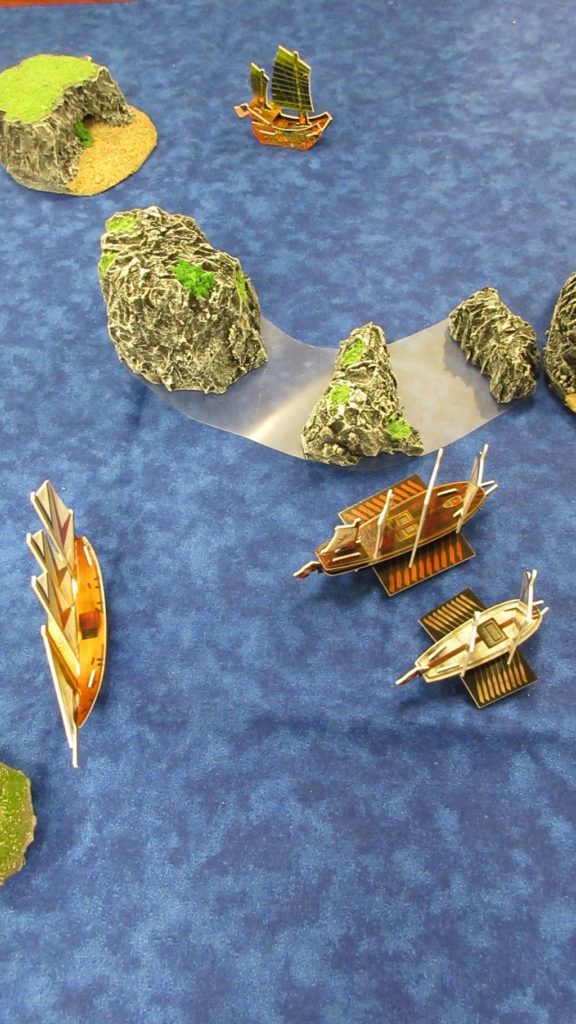 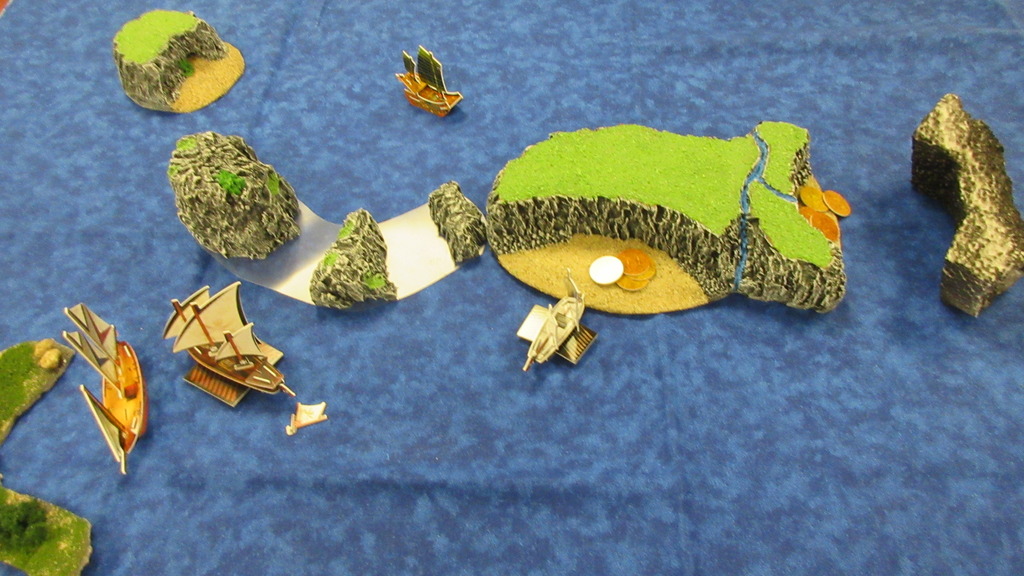 The Grampus sunk the Sahara, and the Nubian Prince was barely able to make it home after a chase around the big island. 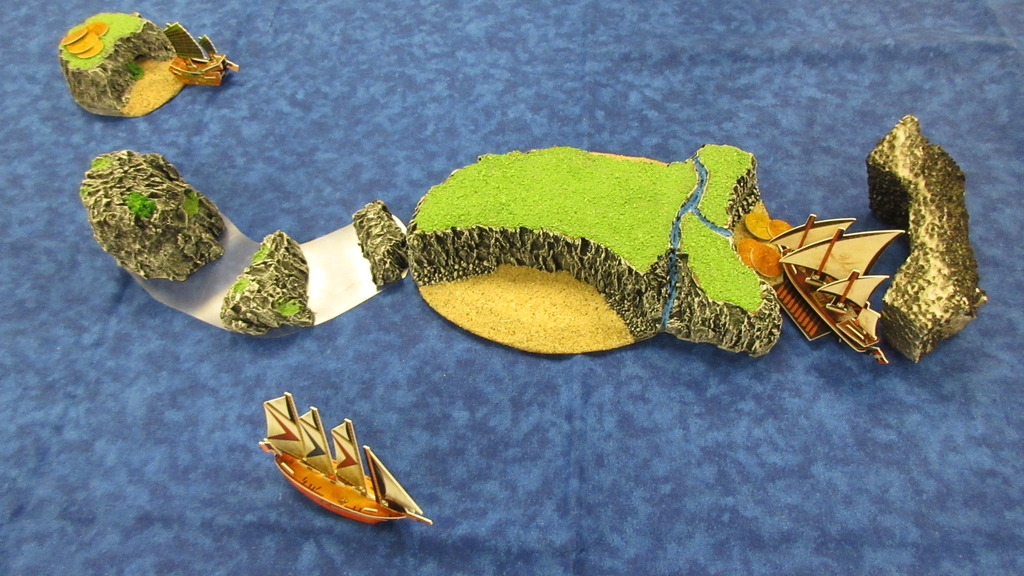 These games further demonstrated the excitement of using CCM’s tables; they really throw you for a loop in terms of fleet construction and pregame strategy. I’d highly recommend them for a change of pace!