A 150 point game has been played! This was a new record high build total for my opponent.

He rolled to go first, using a Cursed American fleet. He used some new ships, such as the Poor Adams, Locker and Pyre. He also pulled a Needle from an RotF pack, giving him a fog hopper. 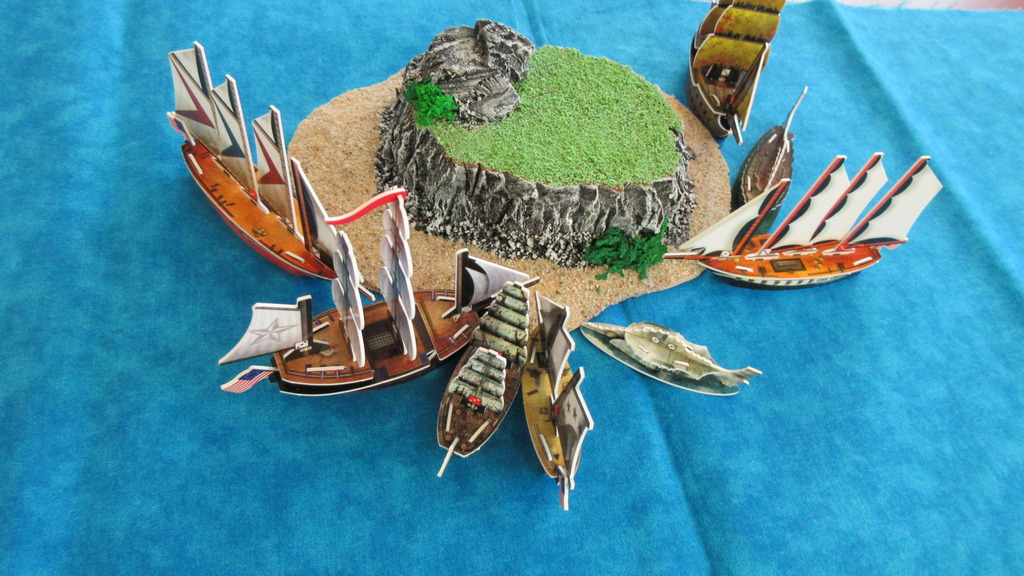 I was finally able to use the fleet I’d been looking forward to for a while.

Slarg Gubbit was subbed in for Champ, allowing for a third oarsman on the Serpent’s Fang. One of my Cursed canoes has disappeared, so the Scepter was used as a proxy canoe. 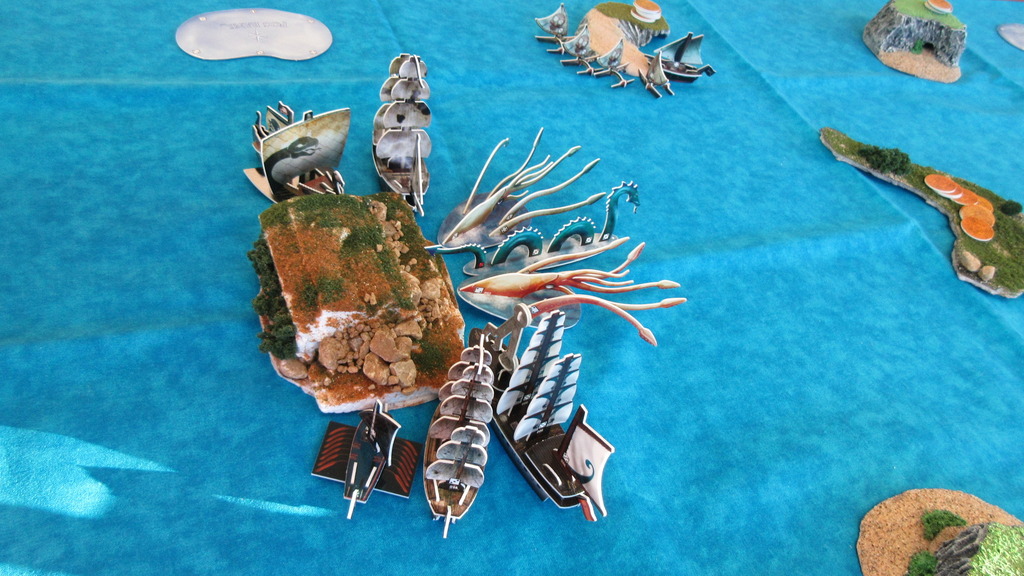 The outer four islands contained 8 coins apiece, with the center island having 10. 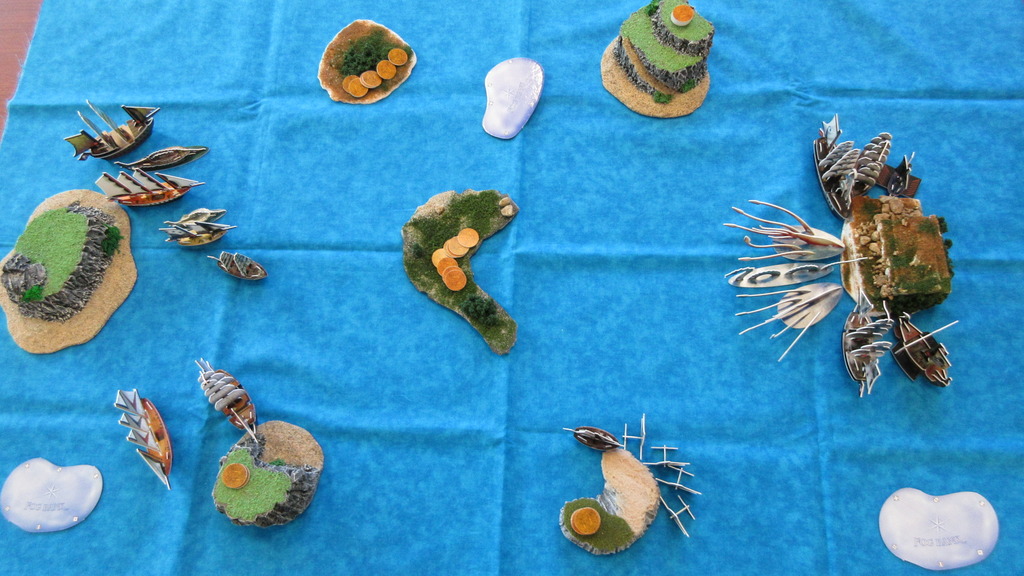 All three sea monsters got both +L bonuses on the first turn, swimming submerged across the sea and towards the enemy fleet. To my dismay the Pequod found the Cursed Conch! 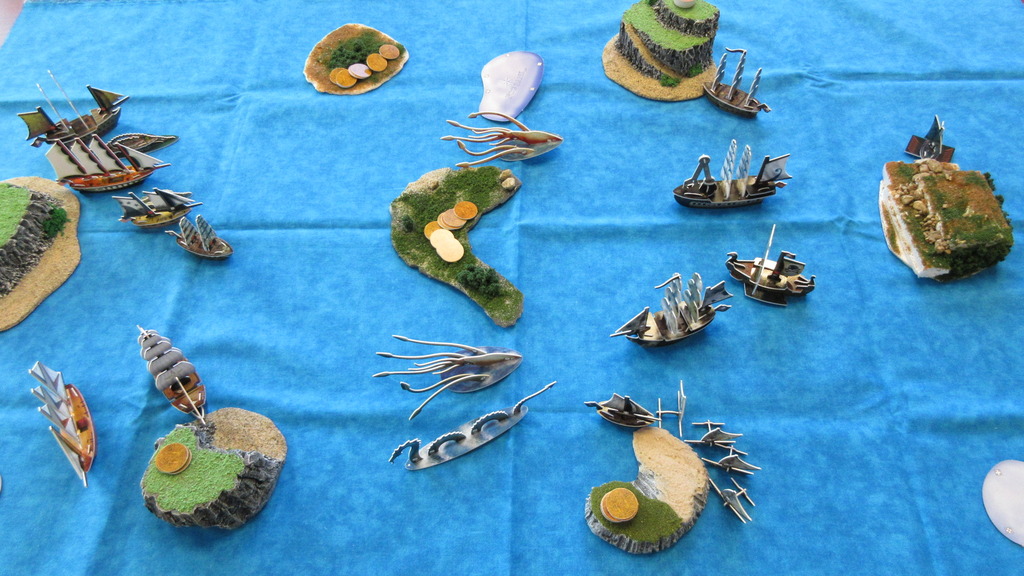 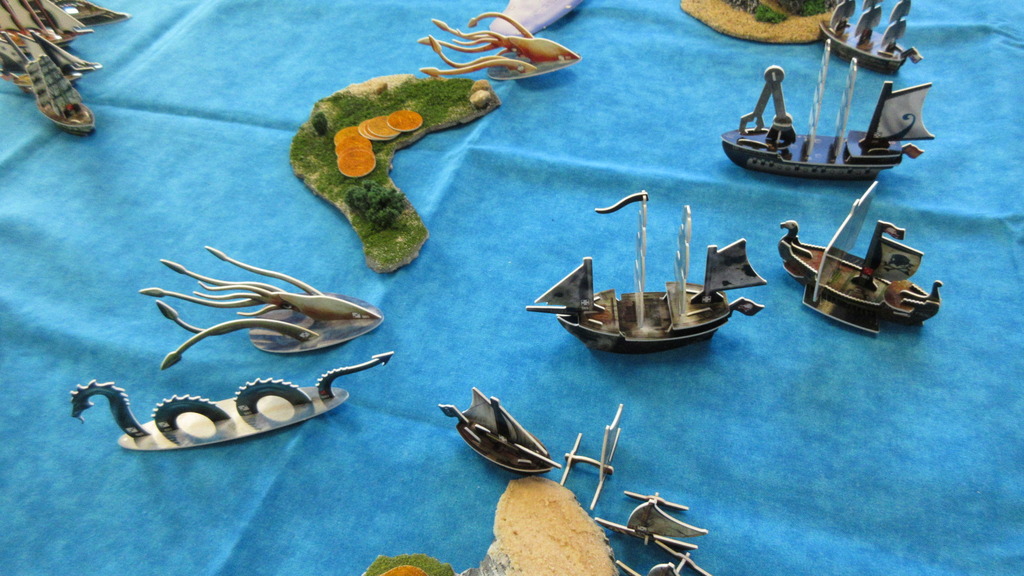 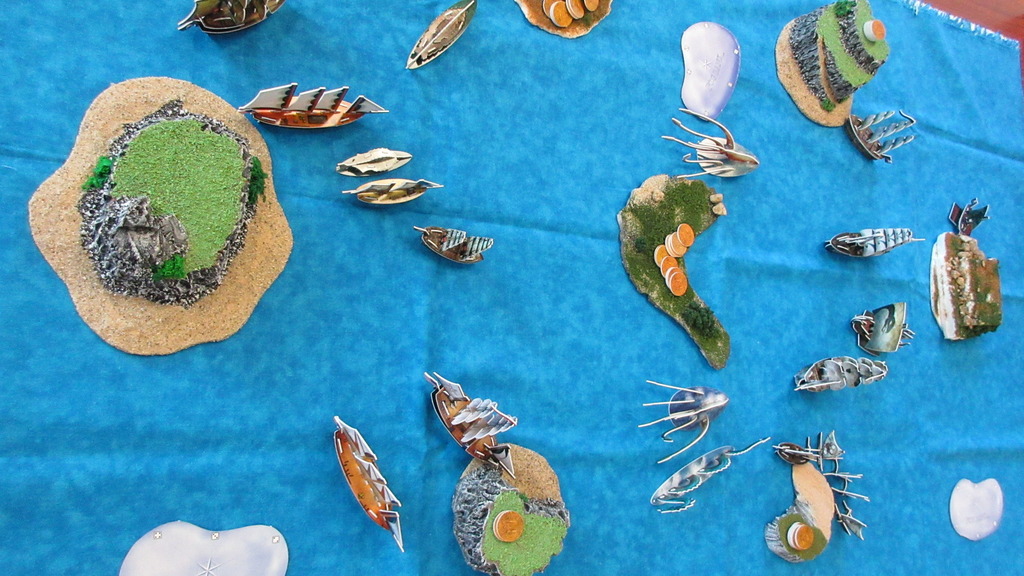 Master Scribe put a trade current in front of the Cursed gunships, while the Buscador hoisted gold from the center island. 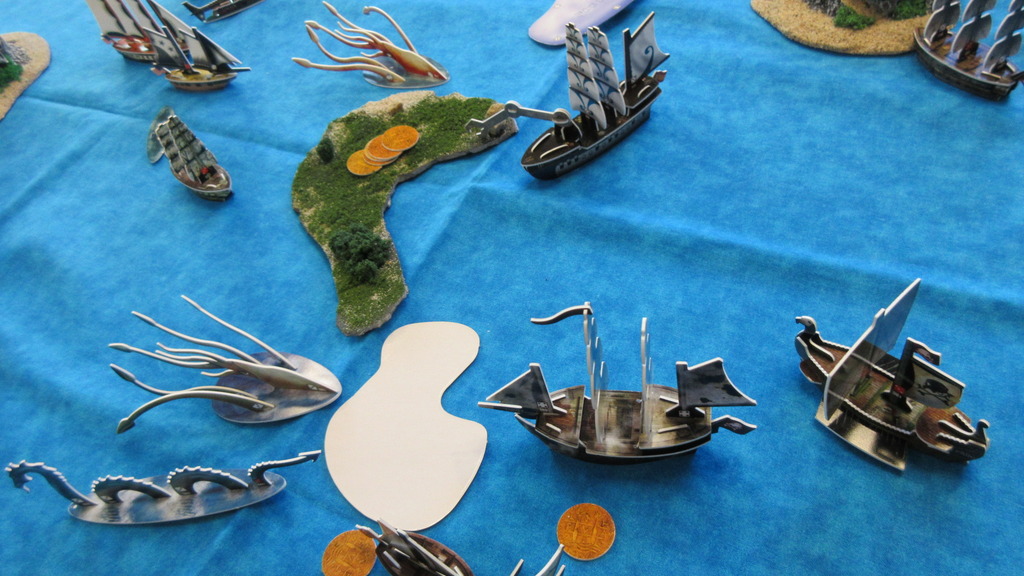 The Pequod tried to return home but was quickly struck by Slarg Gubbit and Tiamat! The Cursed couldn’t eliminate the Conch, but at least they had the ship pinned. 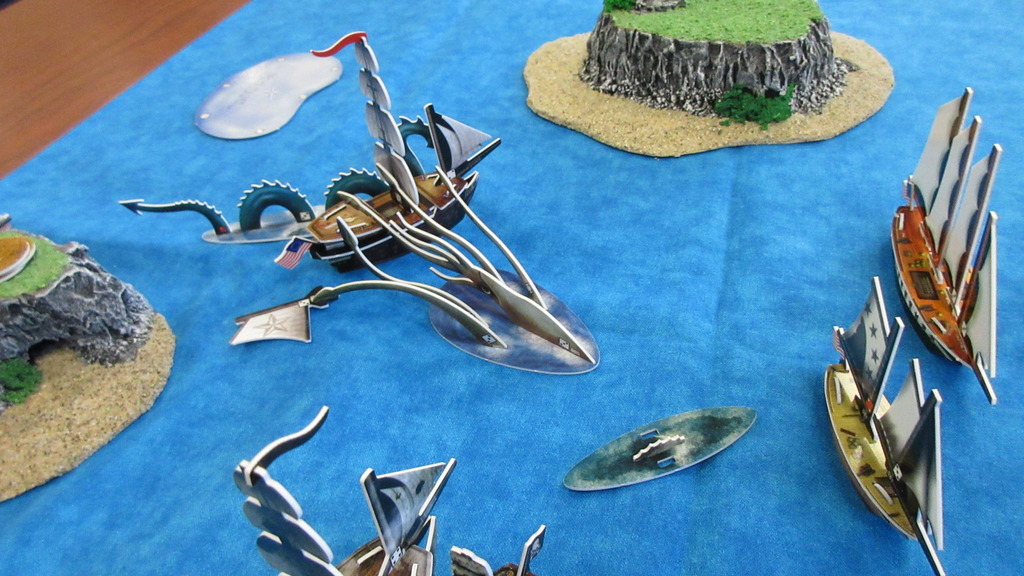 At this point, chaos reigned for a while. Slarg Gubbit was quickly taken out, while Tiamat suffered damage. 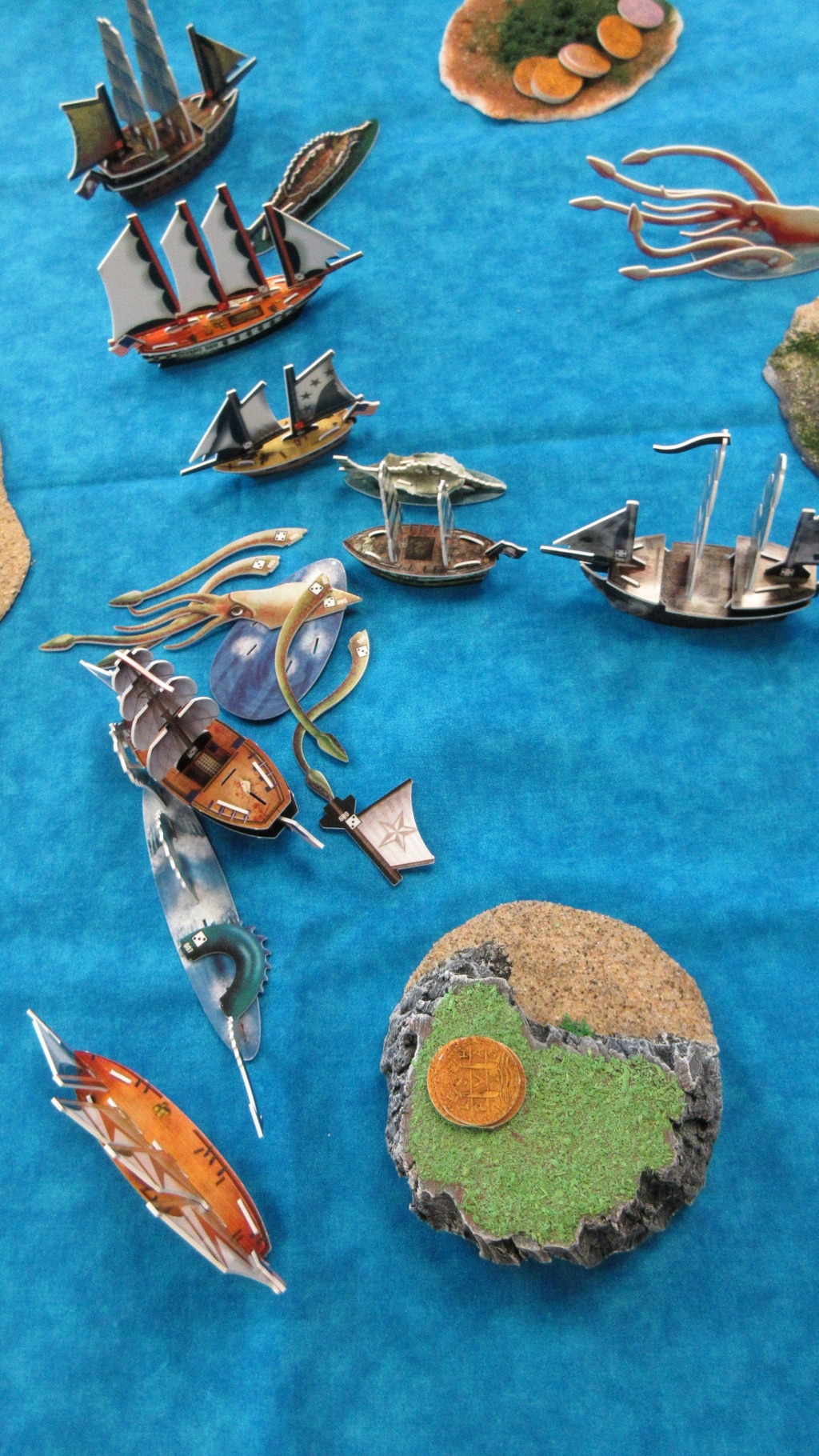 The sea monster assault allowed the Cursed to run gold without any threat of interference. 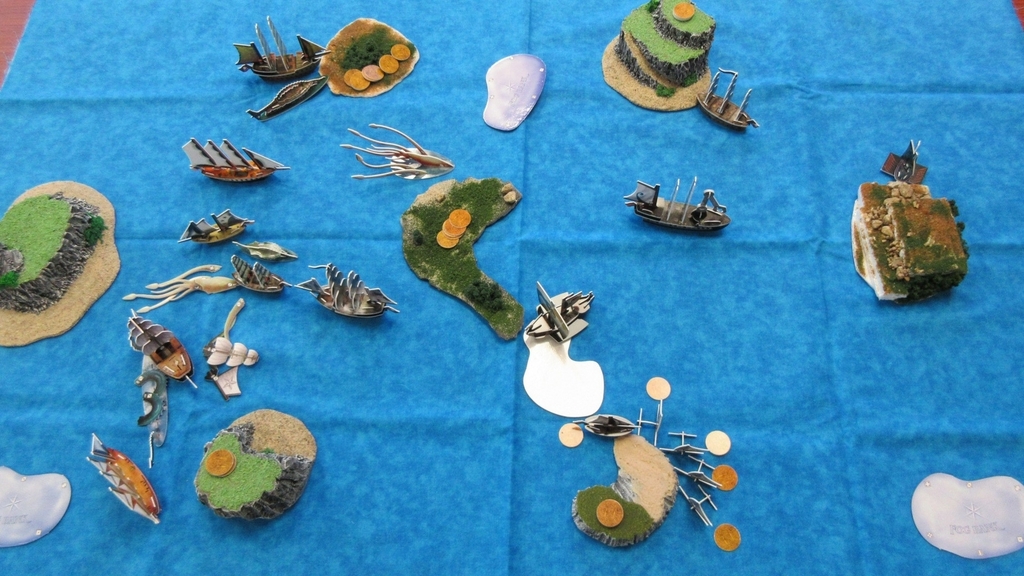 The Nightmare and Tiamat teamed up to sink the Pequod, but not before the Nightmare stole the Cursed Conch. El Fantasma sacced an oarsman to get the Serpent’s Fang in on the carnage, hitting the Needle. Calypsos surfaced and rammed the Shark, winning a boarding party to eliminate DNT and a captain. 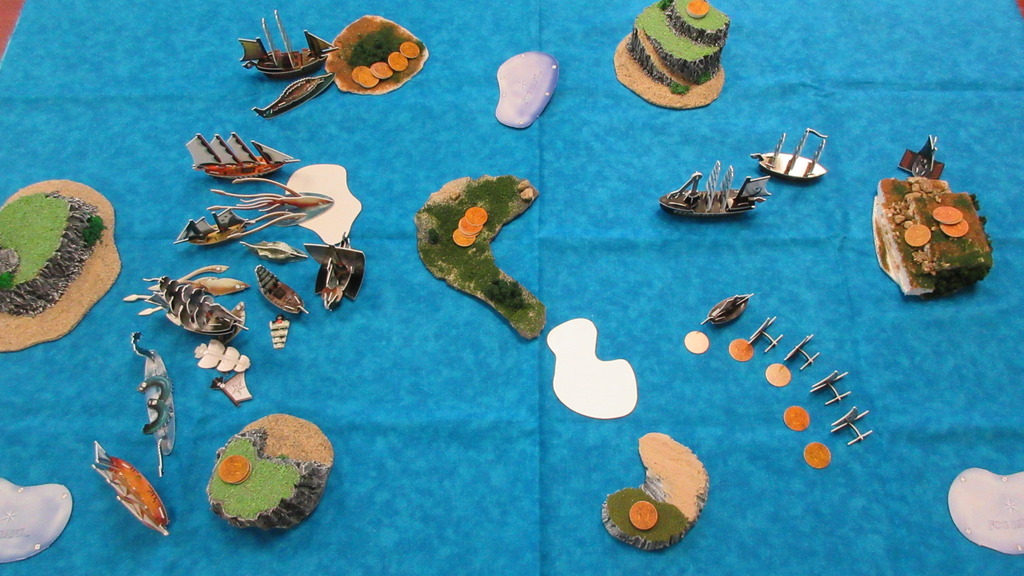 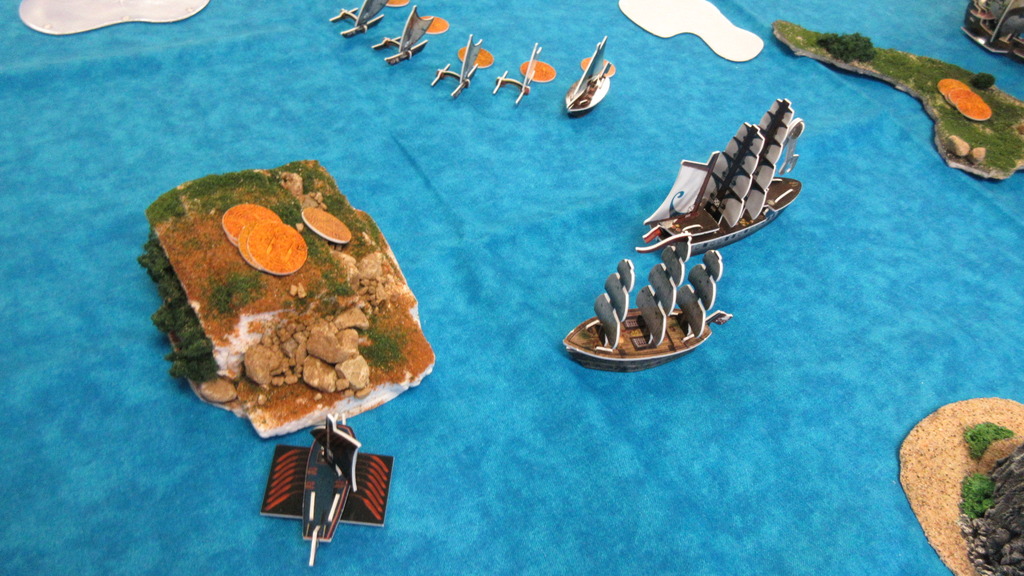 The Americans fight back, killing Tiamat and damaging both Calypsos and the Serpent’s Fang.

Calypsos was killed, meaning all three Cursed sea monsters were dead. The Serpent’s Fang and Nightmare used abilities (sac and Ghost Ship) to move over and target the Locker. However, they were ineffective. 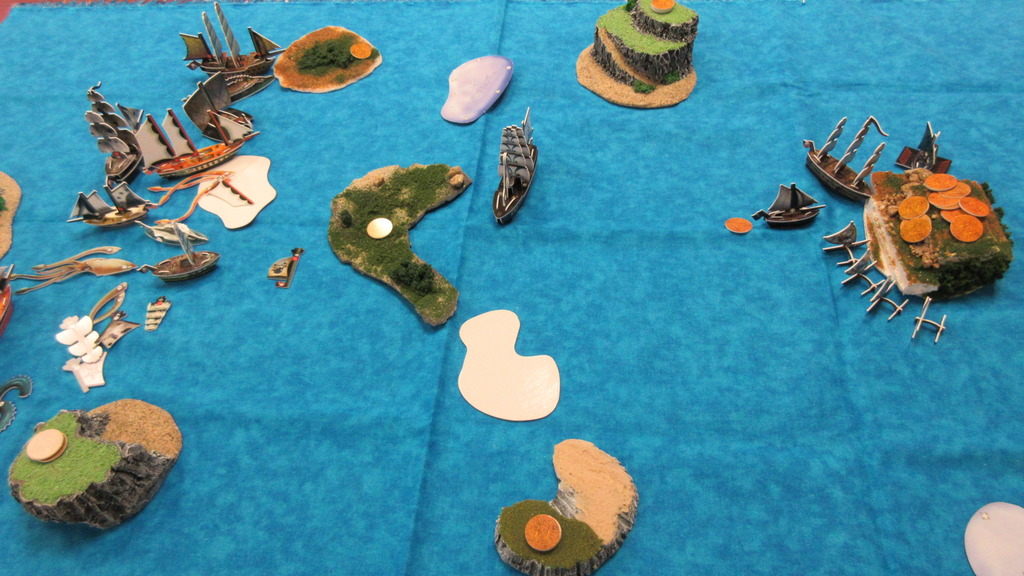 The Serpent’s Fang was sunk, while the Nightmare was captured. 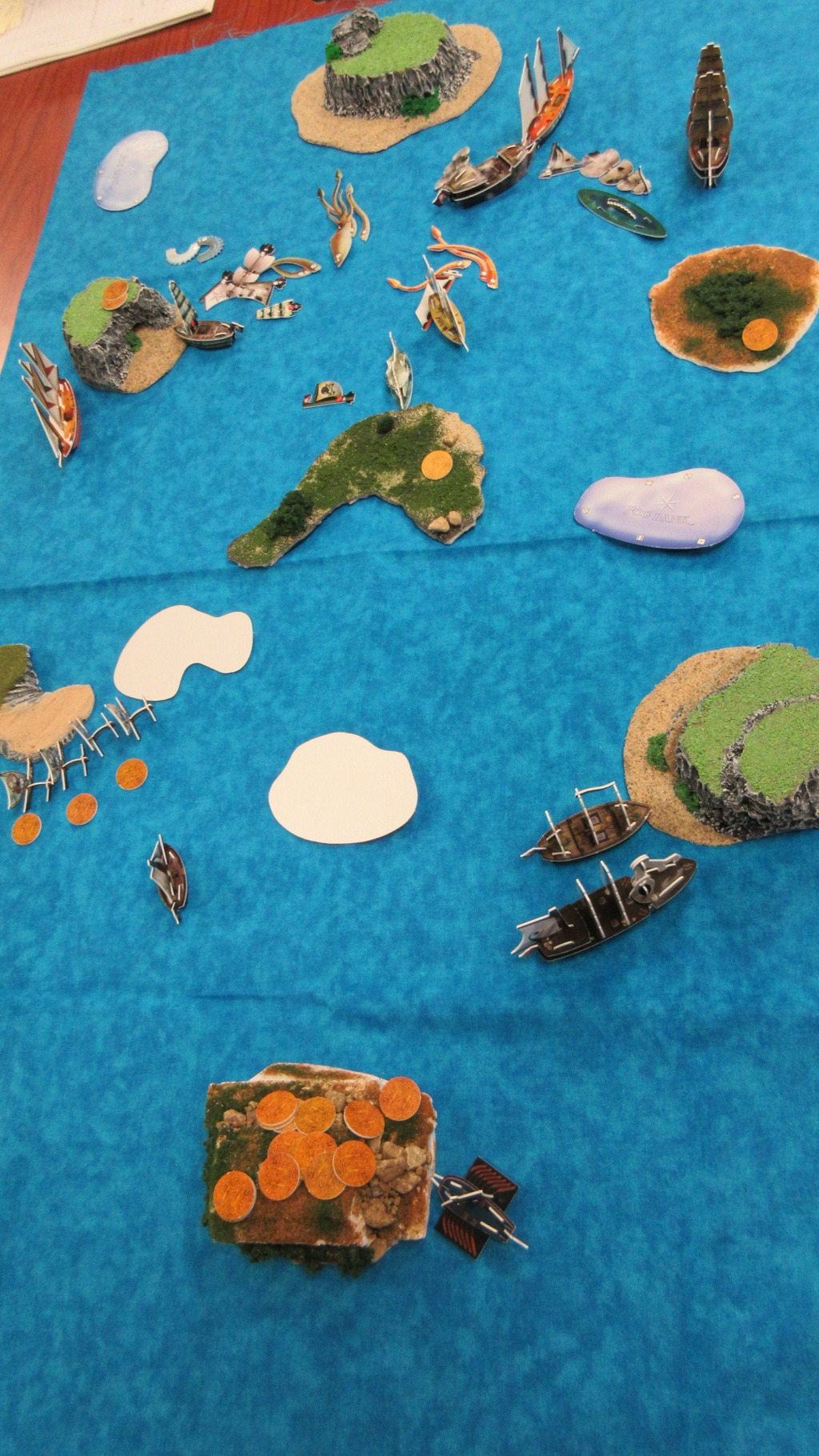 The Grampus managed to eliminate some Cursed canoes, but the game was essentially over. 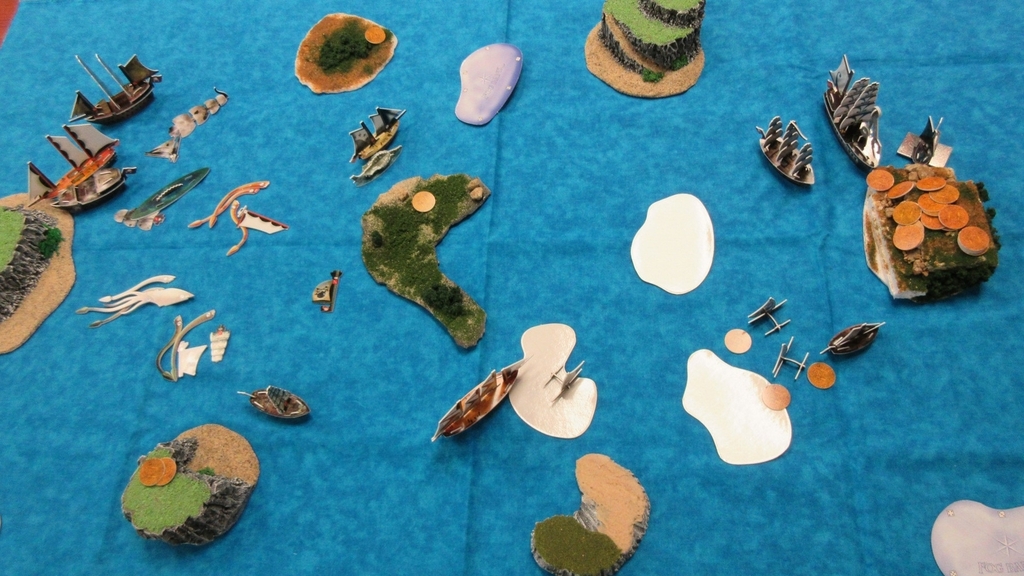 The Cursed conceded the remaining gold to the Americans, and won by a score of 47-14! 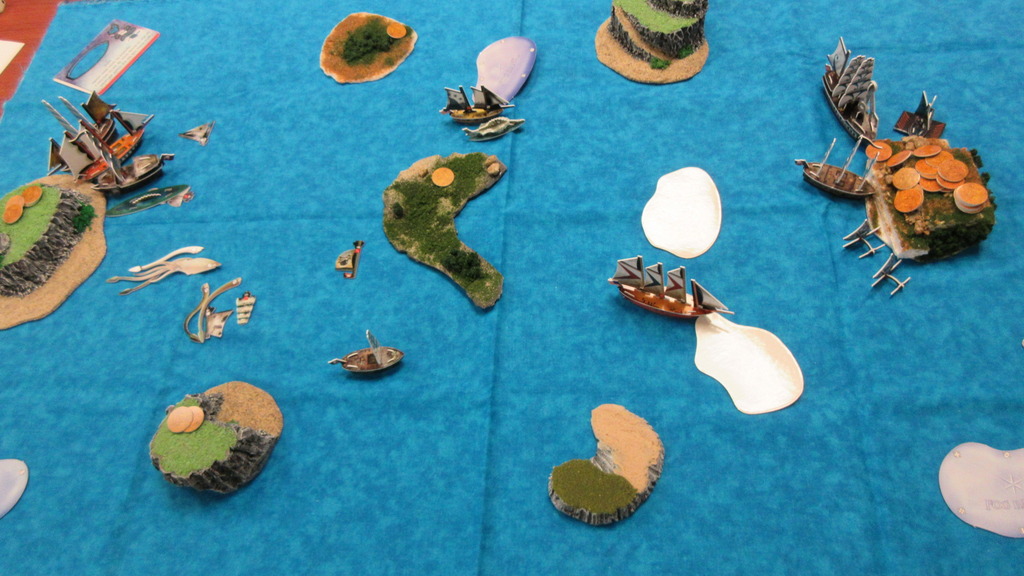 This was a fun game, especially the first 2/3 of it. I was happy to execute my strategy correctly, which allowed the gold game to go uncontested. The Cursed Americans fought well however, capturing or eliminating the entire attack squadron.

After such a large game, we may go the complete opposite route and play tiny games next time to change it up once again!