Last night saw the second game of Pirates, with four participants this time! As with the first battle, I kept it simple as we learn the game and made all the 40 point fleets for the players. Each fleet was a single faction to assist in keeping track of ships, and I ensured each fleet had a five mast gun-ship and at least one fast gold-runner. I’ll add that I picked my fleet last out of two remaining options (Pirates and Americans), so there was no bias or advantage in building fleets. Due to my limited collection (about 50 ships), the French fleet came in at 39 point. I mention this because for this game, I brought in a few more rules and bits so we can ease into play with the full gambit of rules. Each player was given 5 extra points for crew (with the French getting 6) so each fleet was 45 points total. I let people pick the crew from generic options. The Spanish, Pirates and British all selected a Captain and Helmsman, while the French elected to take a Captain, Explorer and Cannoneer.

The Spanish and British players placed their Helmsman and Captain on their five mast gun ships, El Neptuno and HMS Lord Algernon respectively. The Pirates elected to add the Captain to the five mast Revenant and a Helmsman to Neptune’s Hoard. The French added their Cannoneer and Captain to five mast Le Dauphin Royal while the Explorer was assigned to Le Pique.

This was also our first game with a Keyword, Schooner. I initially wanted to throw in some terrain, but as it was the French players first game and the British player wanted to keep a limit on the number of extra rules being introduced, we elected to stick with islands only.

Here are a few pictures of the ships in each fleet. 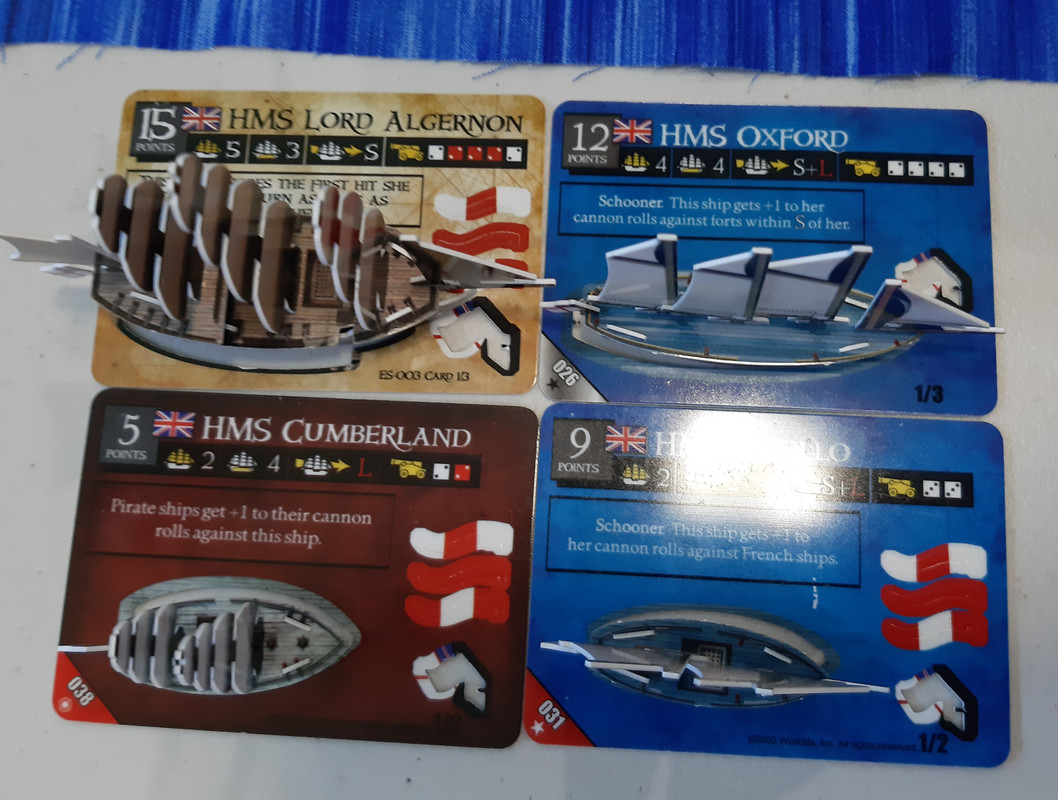 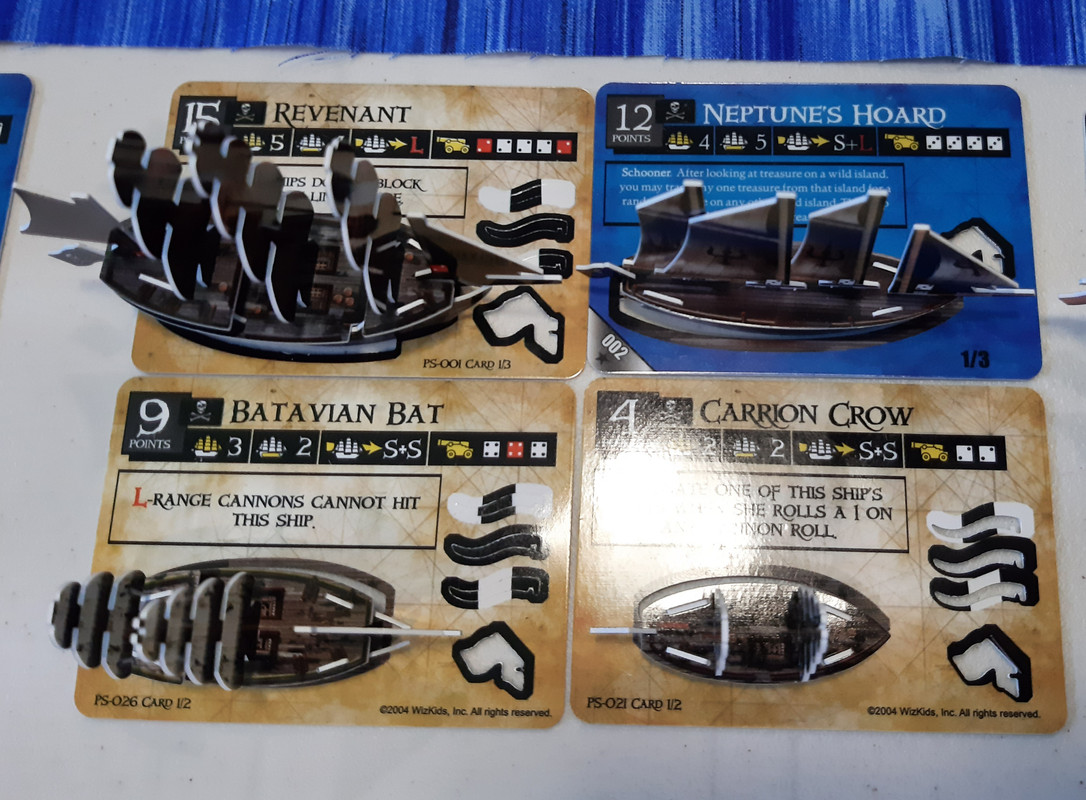 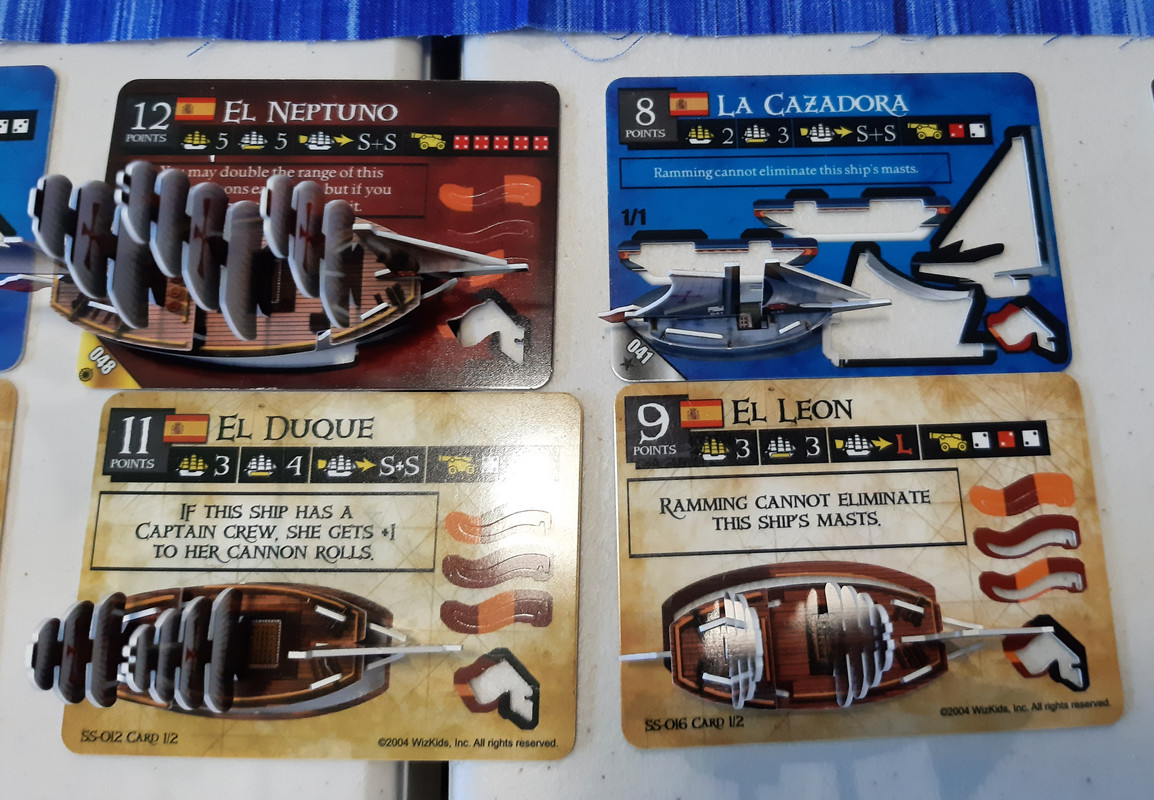 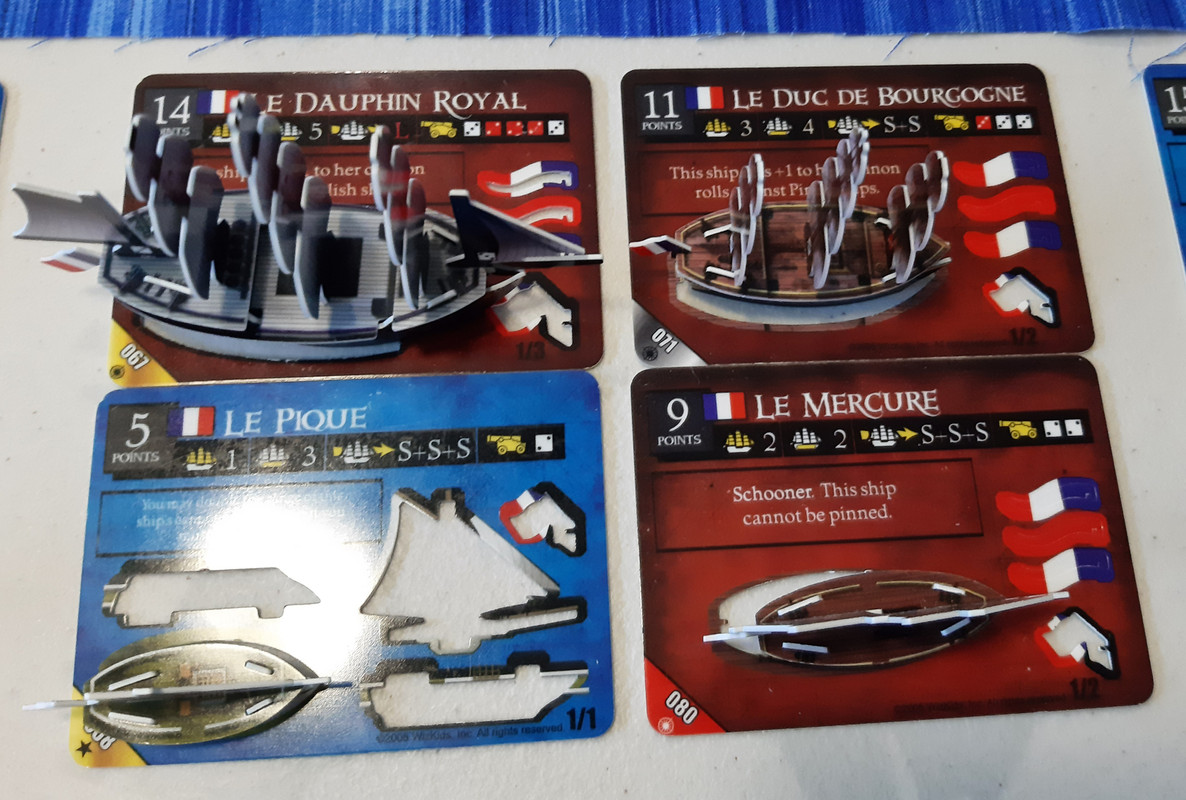 The islands were placed, we played flat Earth, an assortment of coins were selected (8 per player of random value) and home islands assigned. I got a bit lost in figuring who would chose a home island for who, but the players seemed to reach a consensus we were all happy with.

The British wound up in the middle, with the French Northeast, the Spanish West and the Pirates South East. You can see our set up in the below picture. 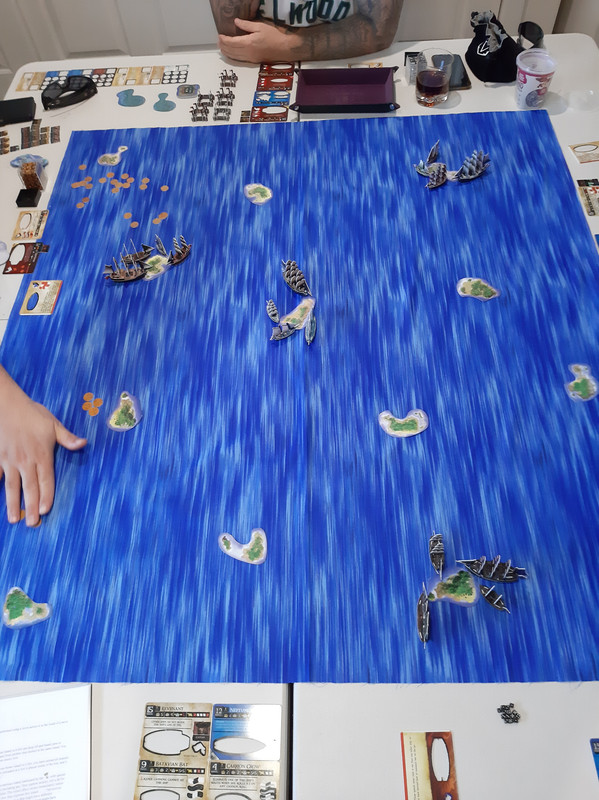 With sea shanties blasting from the speaker, the game got under-way.

The game got off to a quick start, with the British rushing East to contest the islands below the French and above the Pirates. The Pirates, seeing a hotly contested area to their North, sent only Carrion Crow to see if she could snatch and run with a couple of coins, while Revenant pondered towards the British schooner Apollo who was busy loading up some treasure for the British. The Spanish took advantage of their isolation, sending El Leon and El Duque to gather gold while the nippy schooner La Cazadora headed North East to contest an wild island to the West of the French. Finally, the French split, sending Le Dauphin Royal South where she could fight the British and the remaining three faster ships set sail West for plunder.

HMS Oxford rammed the Carrion Crow, before exchanging cannon fire and ultimately sinking her as she tried to steal a few coins. First blood to the British! The Crow did land one shot though, so the Oxford got a bloody nose for the effort. Meanwhile, Revenant had shot Apollo, causing her to become derilict after she had already loaded a couple of coins. It was an easy choice for Revenant to tow Apollo home with her treasure. Neptune’s Hoard and Batavian Bat flew West to grab what gold they could before the Spanish laid claim to everything to the West.

The Spanish continued to plunder unopposed with El Leon and El Duque, while La Cazadora fought the French and successfully rammed Le Pique, causing her to become derelict. Revenge came quickly though in the form of Le Mercure, who shot La Cazadora, in turn causing her to become derelict. Meanwhile, El Neptuno crept closer to the conflict as the French Duc De Bourgogne raced to join the fight. 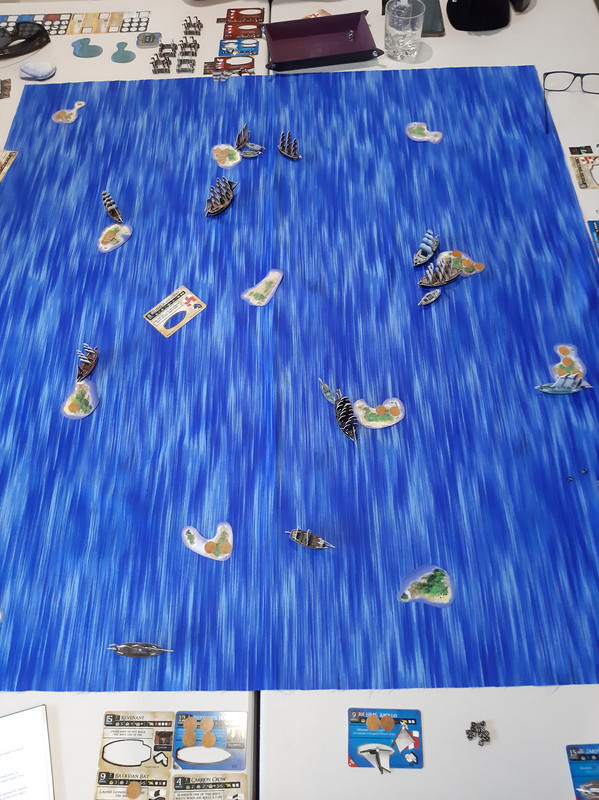 Le Dauphine Royal fired upon HMS Cumberland, setting her derelict before Lord Algernon appeared to fend off the French. This saw the beginning of a fierce broadside battle that lasted three turns before Le Dauphine Royal was sunk (yep, the British got over-eager and fired too many cannons). A badly wounded Lord Algernon limped back home, towing the derelict Cumberland in her wake. Interestingly, or perhaps a bit of a blunder, HMS Oxford likewise chose to return home to repair, rather than exploring and taking what gold she could from the far Eastern isle.

Fast as lightning, Neptune’s Hoard retuned a fair haul of treasure to the Pirate home isle, while the Batavian Bat set off for a second slow plod to fetch a small batch of gold from the island to the Pirates North. The captured Apollo repaired one sail and went off to grab the last coin from an explored island, while Neptune’s Hoard set off at speed for the Easternmost isle the British left un-plundered. Revenant sailed toward the British to cover Neptune’s Hoard. The Spanish Neptuno caught up to and fired upon both Le Duc De Bourgogne who was coming to fight and Le Mercure who was attempting to tow the capture La Cazadora home. Some lucky rolls saw her adding two more derelicts to the game. At this point the French were out of ships and without any gold, decided to start furiously drilling holes in their hulls, remarkably scuttling three derelicts ships over a couple of turns, allowing the Spanish to only tow one ship slowly home.

By this point the French were out of the running, there would be no means to contest the remaining gold on wild islands (though HMS Cumberland had a go at intercepting the Spanish) and it was clear the game was concluded. We added up the loot and scores were as follows:

French with their bravery undeniable.

Our new player really enjoyed the game and as with last time, we all agreed it was a fun and enjoyable time. I’m looking forward to the next game, though I do really need a few more ships in my collection so that we don’t need to recycle some ships each game.