I never got to play the Pirates Constructible Strategy Game Online version released by SOE (Sony Online Entertainment).  I have learned a lot about it from the radio show hosted by RedDragon and Captain Ron.

You can actually grab the game here if you want to mess around with the basics a bit.  I finally downloaded it just now to see what it looked and sounded like.  Made me miss a game I never even played!  Don’t get too excited though – as far as I can tell, you cannot actually play the game at all, just access the fleet builder.

I had some trouble at first.  You can get an error message like the one I got (shown below) if you try to run the wrong file. 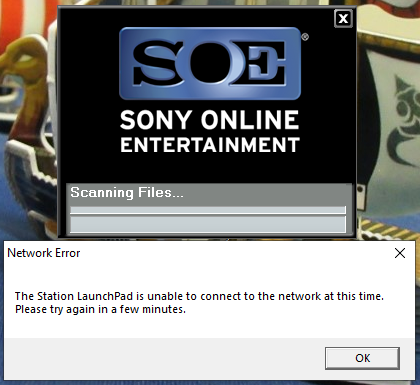 Luckily someone at the Pirates CSG Facebook group was able to help me out.  You need to go into the directory of files from the download and run “pirates.exe”.  For me the chain was Windows (C:)>Program Files (x86)>Sony>Worlds Apart>Pirates CSG Online>pirates.exe.  Last edited 10/26/2006!  O_O   Very cool!  😀

Although the game looks better than the current way to play Pirates virtually, it wasn’t without some flaws.  From the aforementioned podcast/radio show (really good – give it a listen!), it sounds like there were numerous bugs.  Some tactics that were made illegal in the tabletop (“TT”) version were some of the best ways to win in the online version – reverse pinning with a ship that can’t be hit by ships within S of her, getting more than 2 full actions for one ship during a turn, etc.  That would definitely provide a learning curve for someone like me, who has played the main version extensively but without such overpowered tactics being legal.  In addition, the game was flawed due to the lack of sets.  Not all of the sets were available, so fleet building and combos would be limited compared to having the full scope of game pieces available either in the physical version or on the VASSAL module.  Finally, there was a timeout system where you could win the game by taking your turns faster than your opponent, similar to how a chess clock works.  That is definitely an aspect that I would not like to see, so although I wish I had gotten involved (I didn’t know about anything to do with Pirates CSG in the virtual/internet world until early 2011), I love playing on VASSAL due to the freedom it allows.

Check out the trailer for the game here: (not my video of course)

Did you ever play Pirates Constructible Strategy Game Online?  Did you like it?  What is your favorite memory of the game?  Please comment below your thoughts!  😀

There she is! Without further ado, introducing my newest 10 master: the Celtic Fury!

After becoming a moderator at Miniature Trading, a gift was sent to me by two extremely generous members of the forum for my contributions: the Celtic Fury, and a South China Seas Super Rare pack (which I partially featured on my Instagram) from xeriousone. 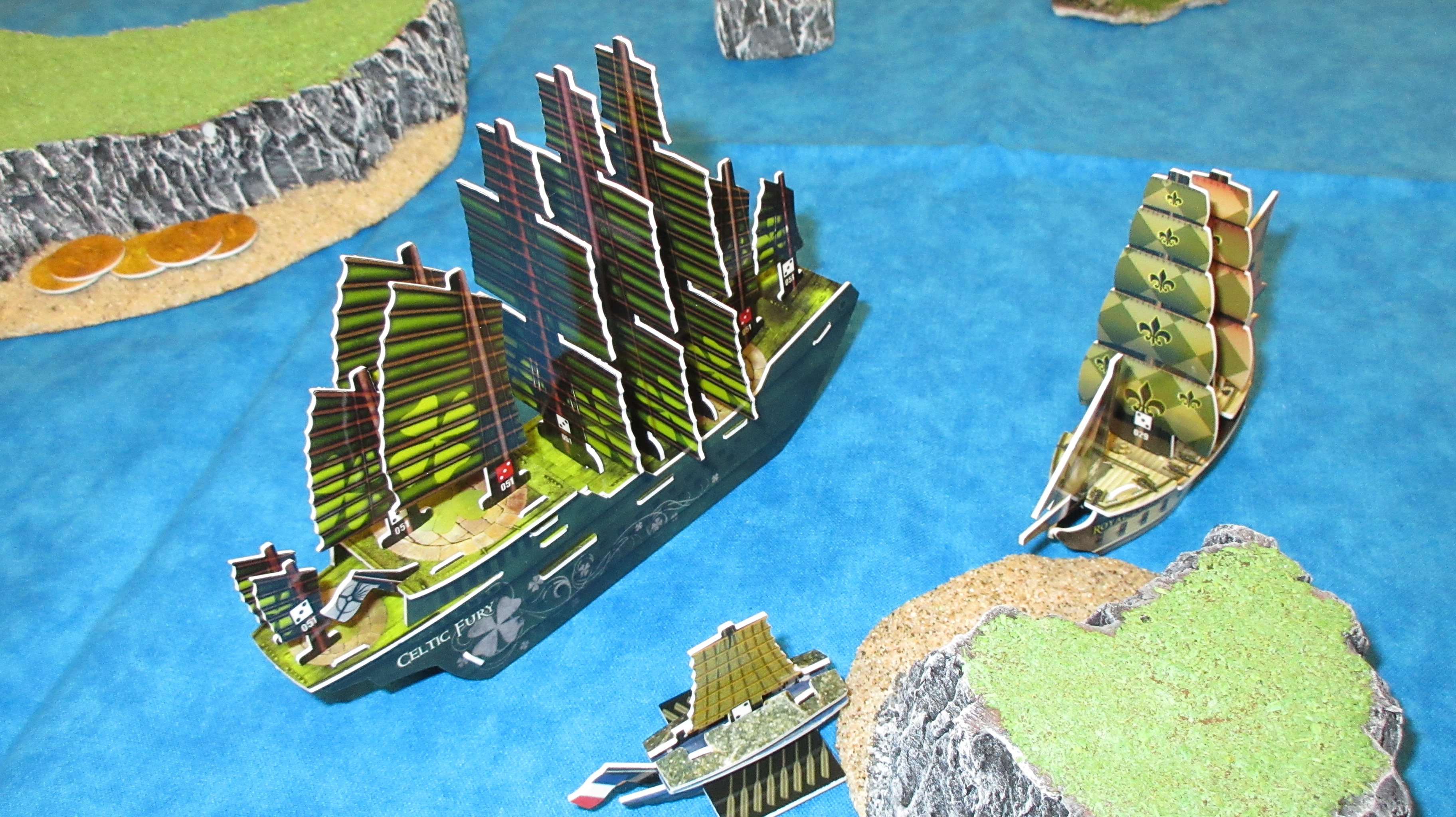 The fleets were as follows:

It’s a combo I’ve been intrigued by in the past, and putting it on a brand-new (constructed hours earlier heh) 10 master seemed even more perfect. Parley on a gunship, while Rousseau’s reroll pairs perfectly with O’Brien’s SAT. In addition, with her link the Celtic Fury would be sailing with 4 cargo spaces open.
English Americans:
Grampus + captain, helmsman, oarsman
Pequod + explorer
HMS Dunlap
HMS Henry VIII + oarsman 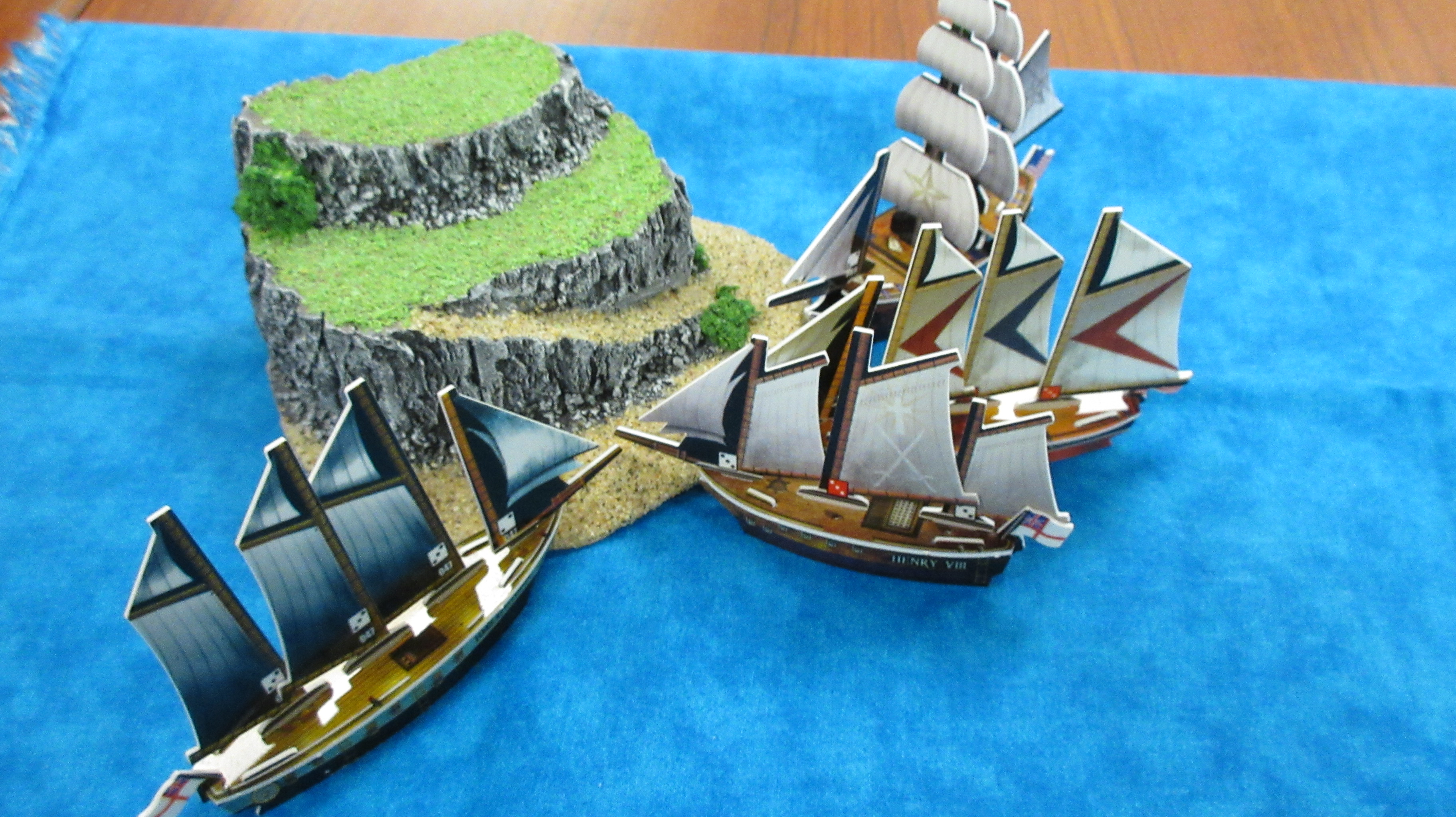 The Celtic Fury (CF) got a quick SAT and reached a beach on the main wild island. At the right you can see the Floating Stone and Royal Louis heading for other gold. 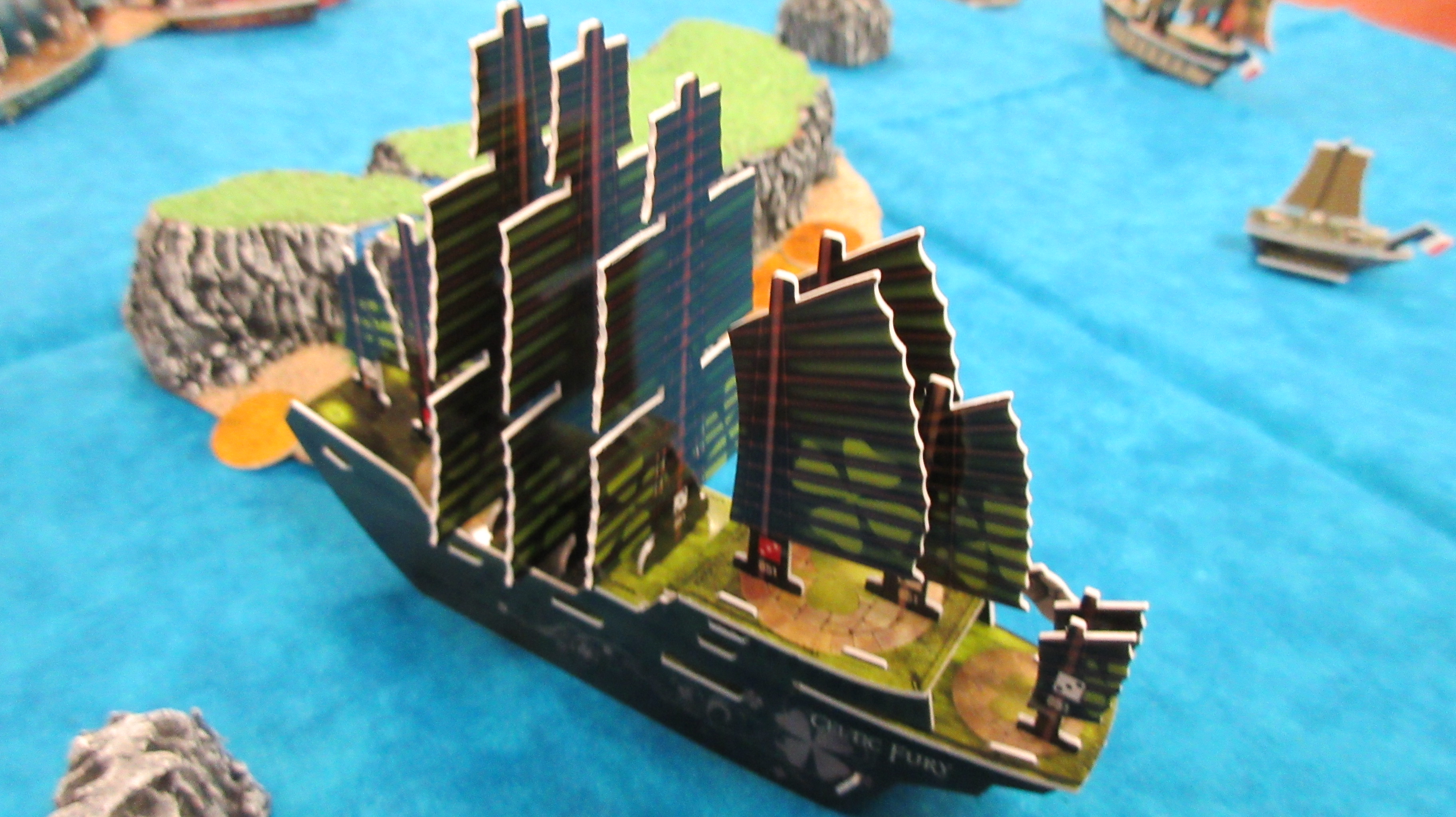 On the second turn the fast Grampus invaded French waters, dismasting the Floating Stone. The Celtic Fury sailed up, and true to my past form (not just in terms of shooting but especially with 10 masters), missed 7 shots out of 8!! It was an unsurprisingly poor start for yet another disappointing 10 masted behemoth. (though, considering the cannon ranks it was much less bizarre than my Baochuan with world-hater Chang Pao aboard missing 6 shots out of 7 in the RISK game from 2012…) 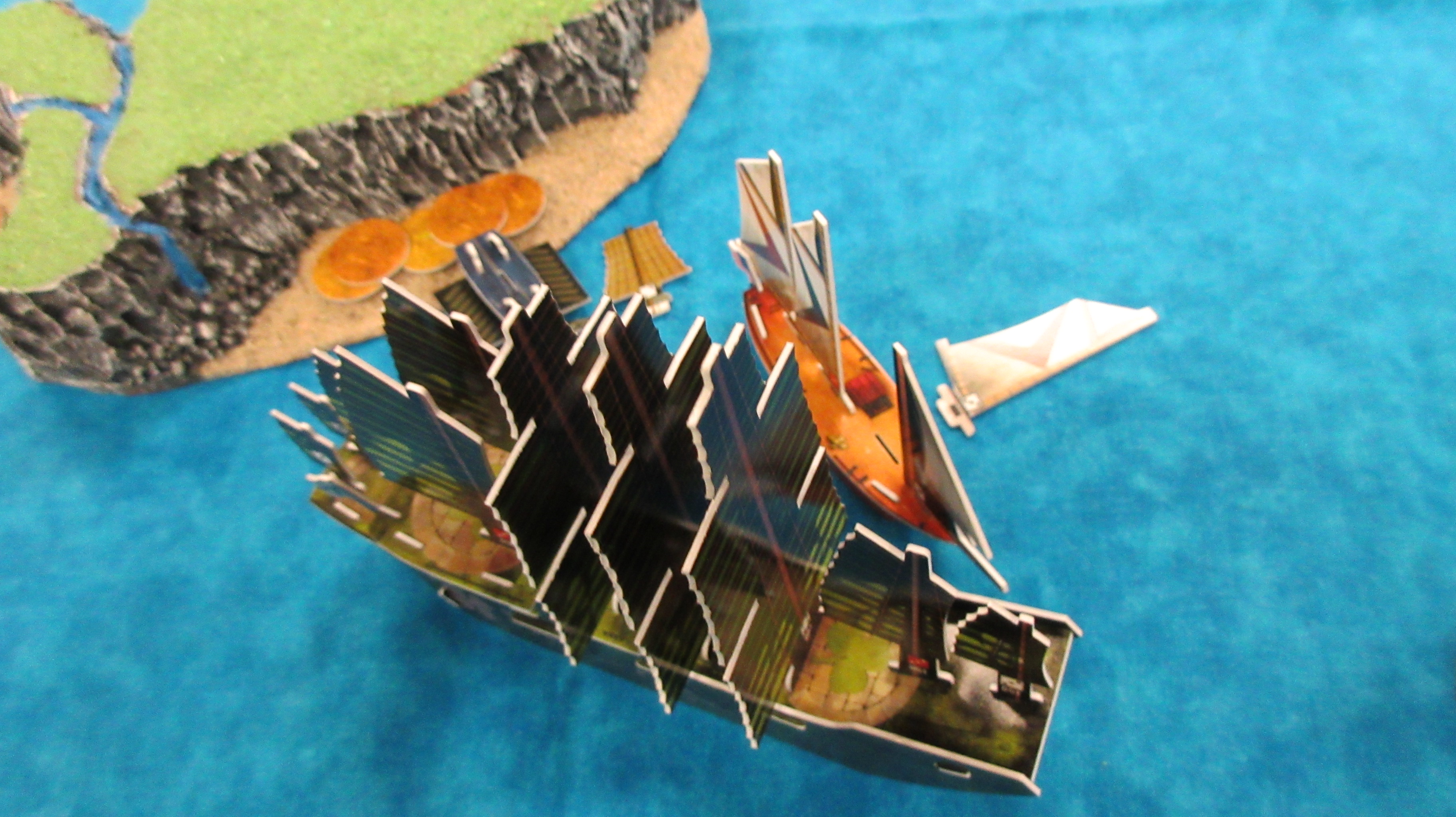 A better angle on the battle: 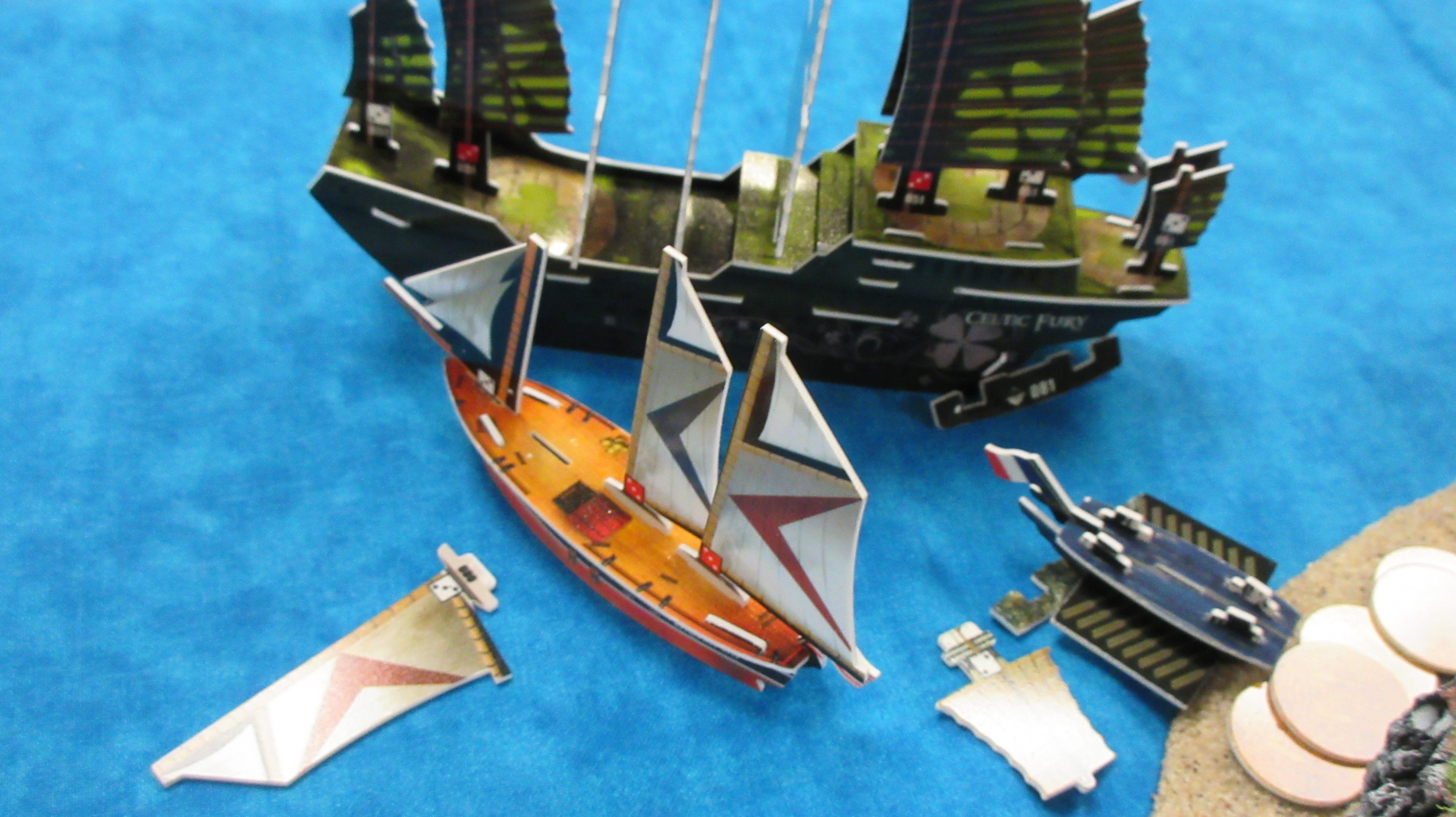 The Henry VIII reached an island, but the Royal Louis had already taken most of its gold. The Pequod took most of the gold on the beach opposite the fighting. (sorry that my opponent has incorrectly assembled the Dunlap, I think we were too busy during the game to bother fixing it) 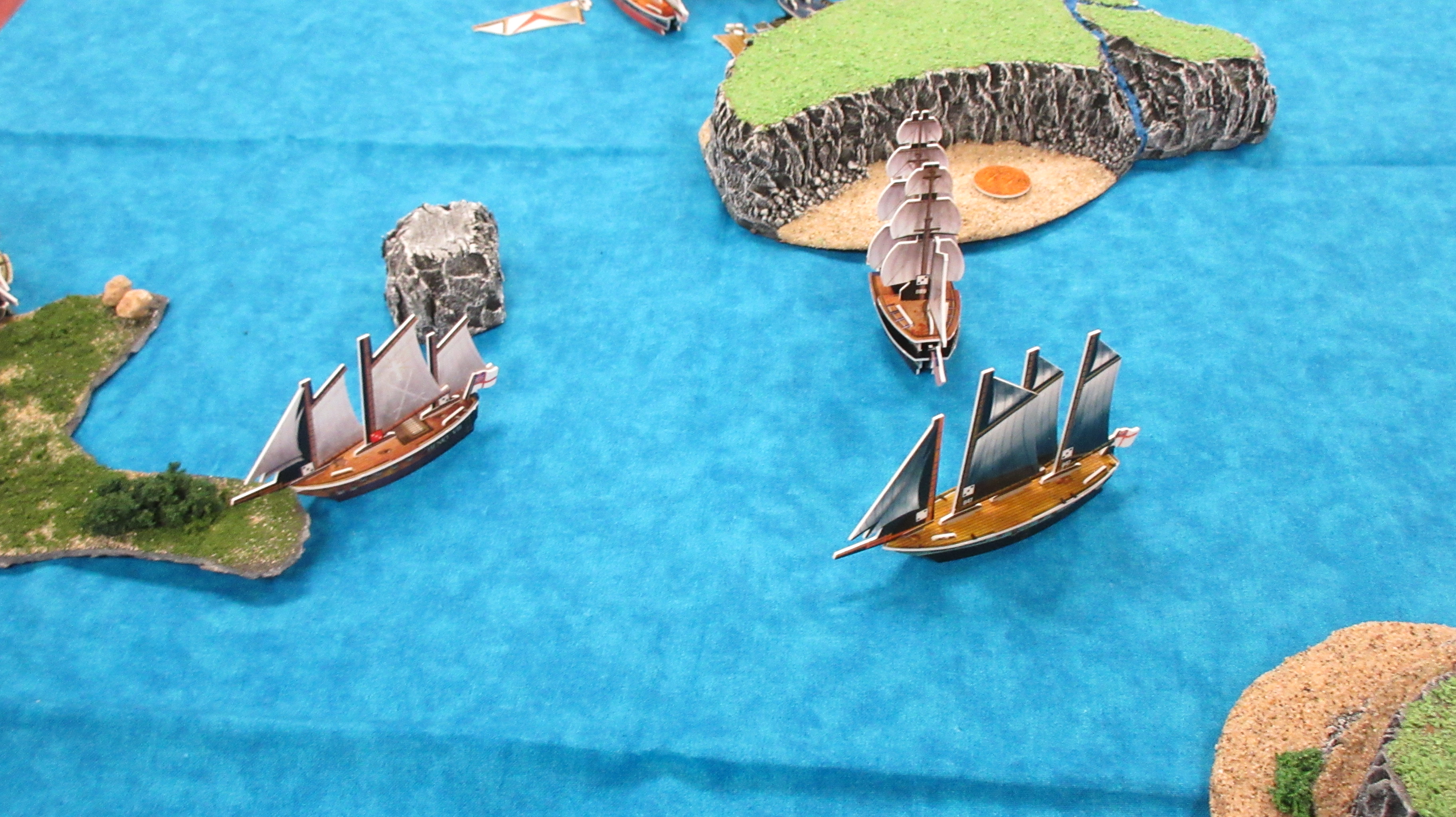 With the help of an SAT, eventually my strategy of simply putting more and more firepower on the target won the battle (not dissimilar to my strategy in VASSAL Campaign Game 1). The Grampus did sink the Floating Stone, but was sunk herself soon thereafter. 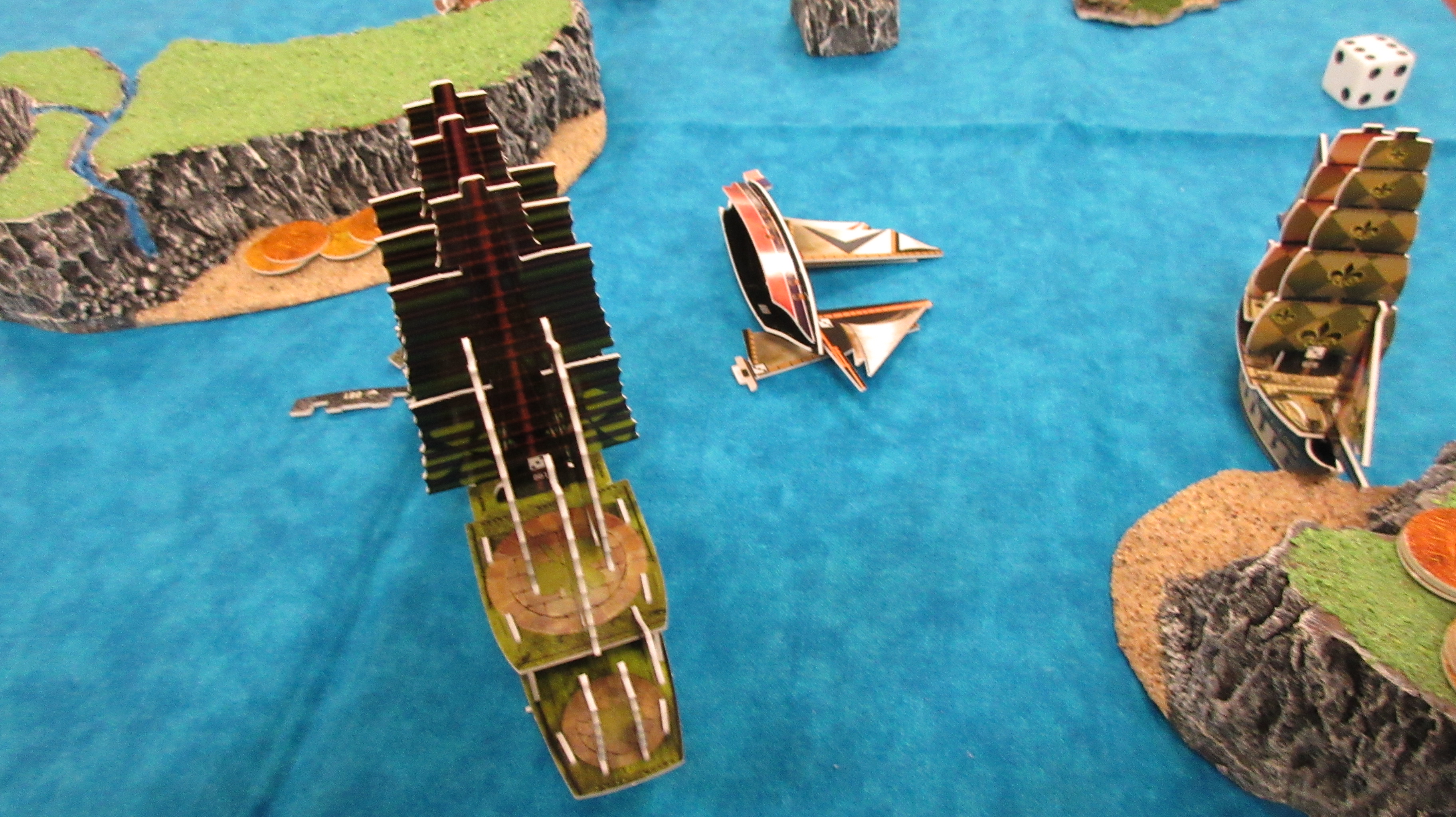 Perhaps the CF’s gunners were just waking up? XD Or they’re just inexperienced! 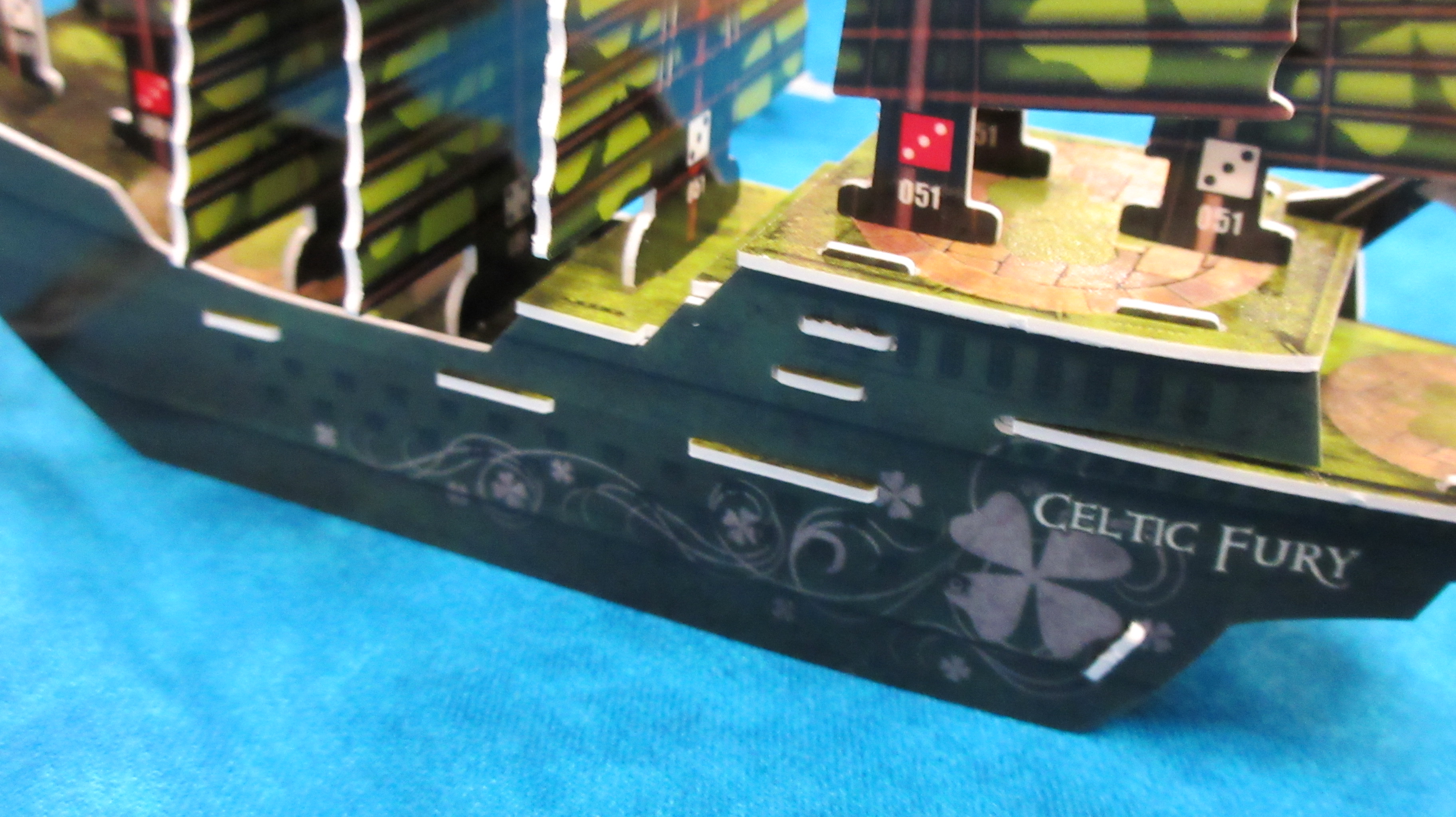 The CF heads to finish off the original beach she explored, while the Royal Louis sails over the debris of battle. The English Americans have gold headed home, and not much remains available. 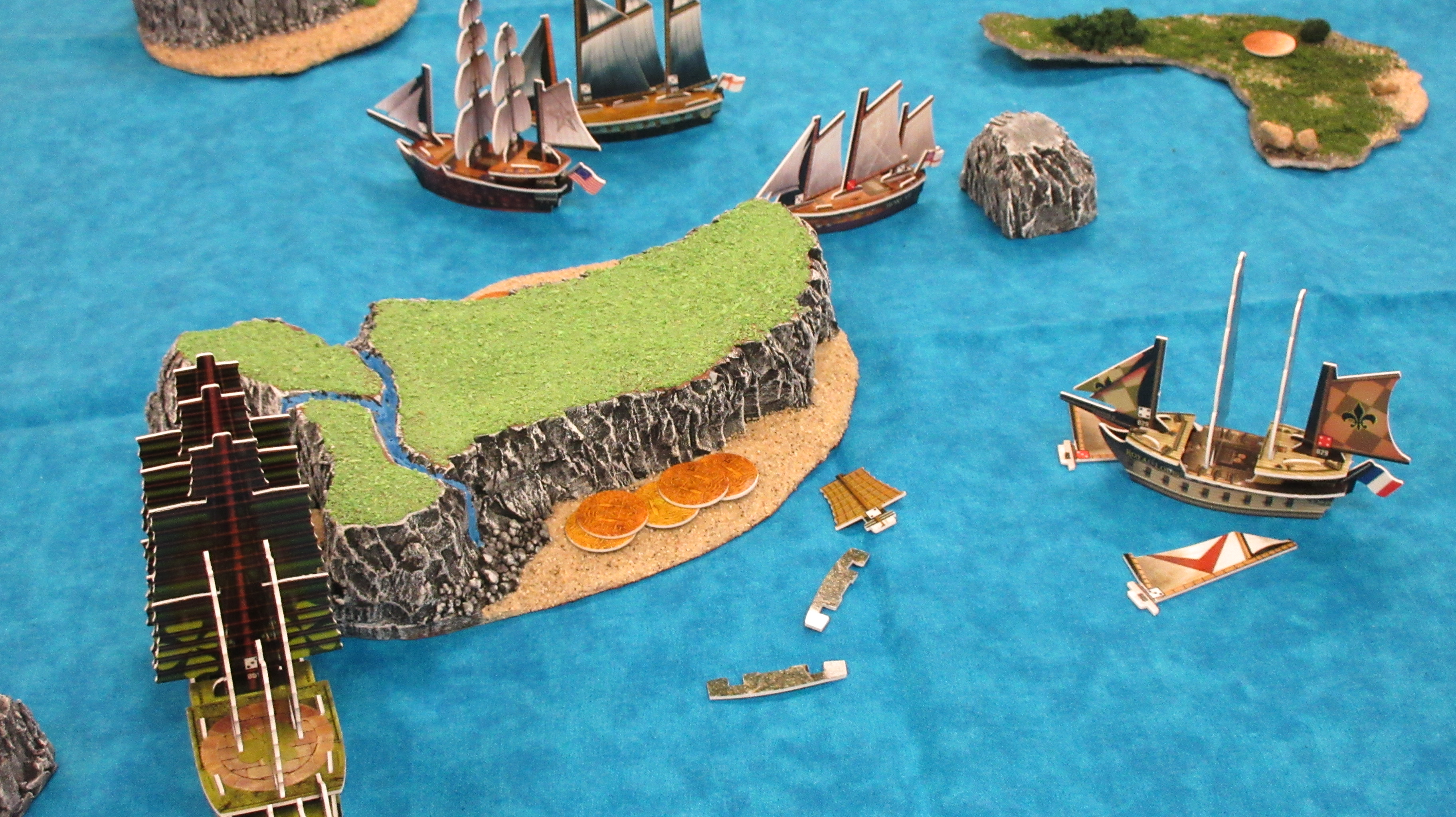 All ships carrying gold eventually got home. The Celtic Fury got another SAT to cripple the Henry VIII, but after that, O’Brien decided she had caused enough carnage for one day. 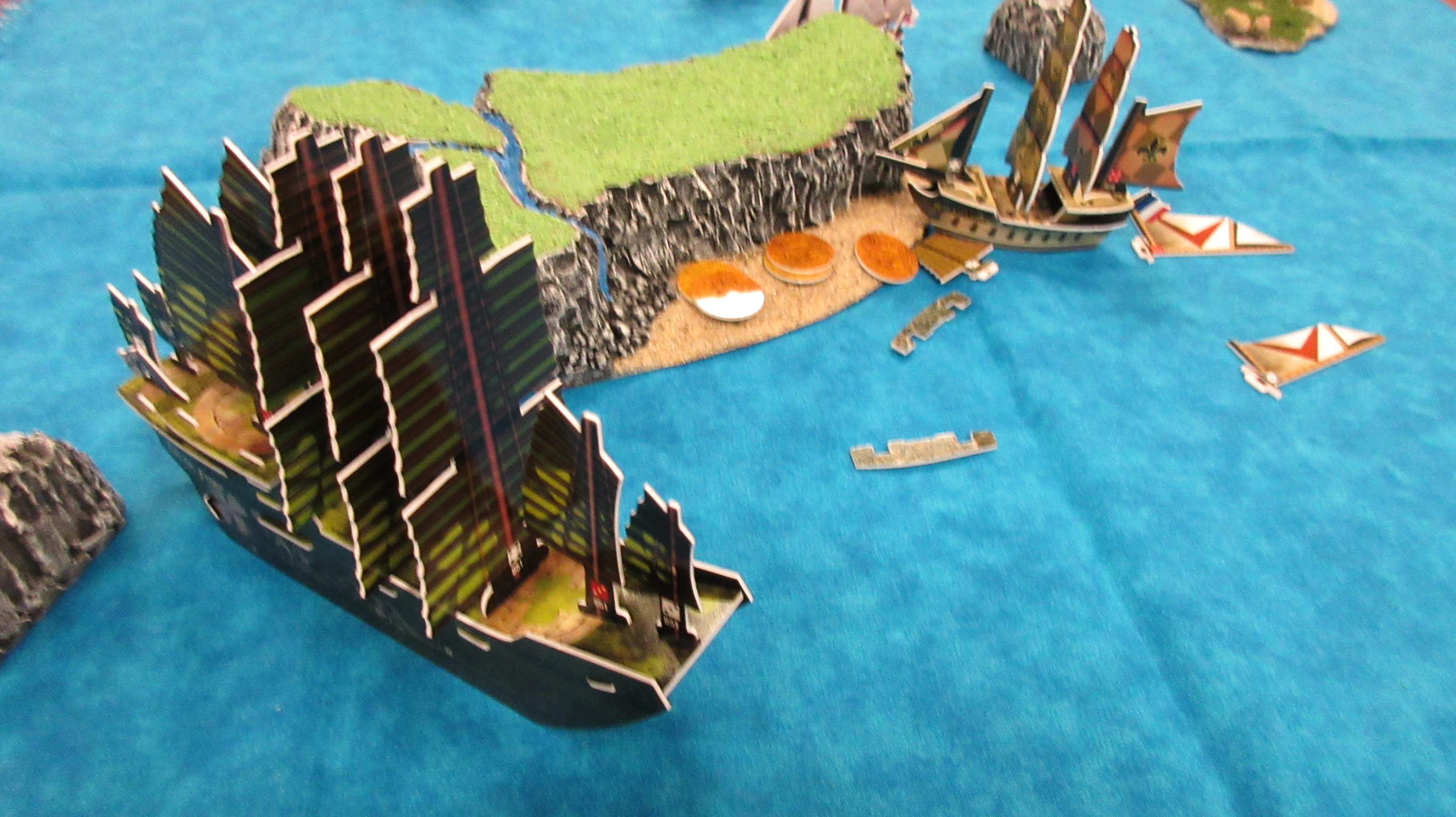 The final scores proved how many high-value coins had been picked at random for distribution:

A mostly successful debut for the Celtic Fury, with a lot of help from her crew combos. The English Americans had success as well, sinking the Floating Stone and collecting quite a bit of gold in a short time. The differential looks lopsided, but the game was arguably over early on, when the Celtic Fury found at least 19 gold (7,6,5,1 or something) in her first haul. I was happy not to use Parley, as it would have made my fleet seem somewhat OP, but Duncan Rousseau and the Royal Louis remain two of my favorite French game pieces. I find it funny how typical my luck was – rather good with double actions (I believe I got 3 SAT’s in a row without needing to reroll), but awful with cannon rolls (as usual, including recently on VASSAL).

More reports to read – besides not one but TWO Frozen North 10th anniversary games, Xerecs and I have been joined by Noahriffic from England for a 3 player game that is still in progress! (further proving that time zone differences don’t necessarily matter, even for live games)

hiddenelephant (Peter O’Connor on the module) just played his first game in quite some time!

We used our own fleets:

To keep things fair at 40 points apiece I took out the Gibraltar flotilla and added oarsmen to the Antelope and Sea Tiger. 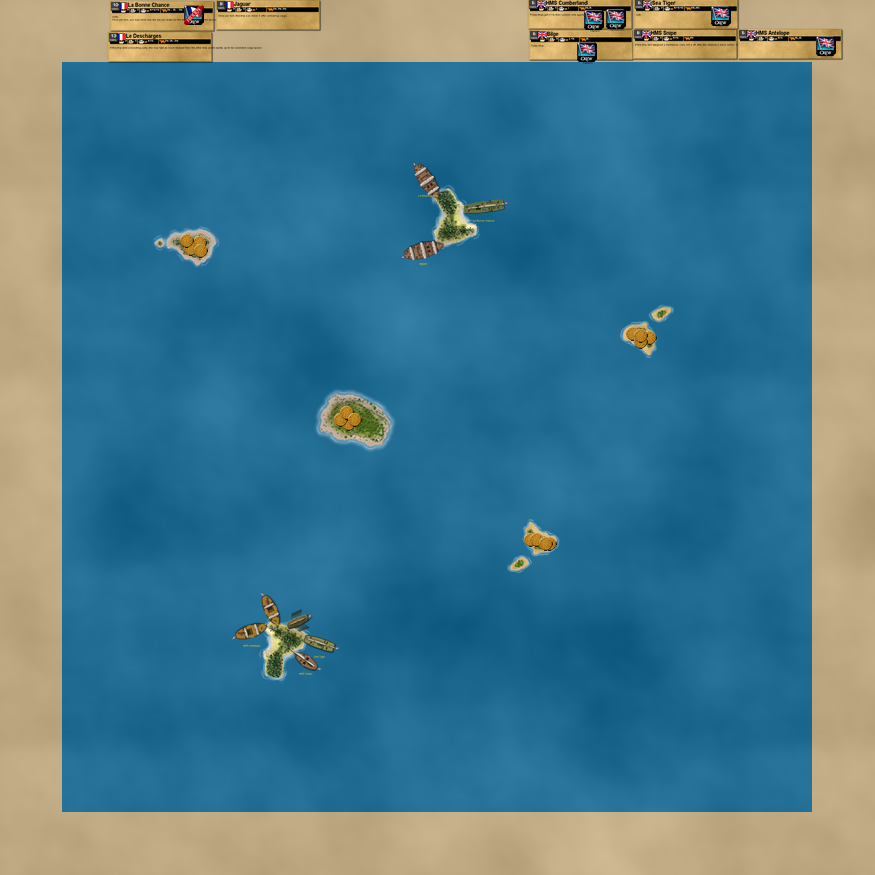 From top to bottom: the Jaguar and Descharges split up with some help from Deleflote aboard the Bonne Chance, but are pursued by the English gunships.  The Antelope and Snipe team up at the center island, while the Sea Tiger is stuck for a turn after finding the Natives UT. 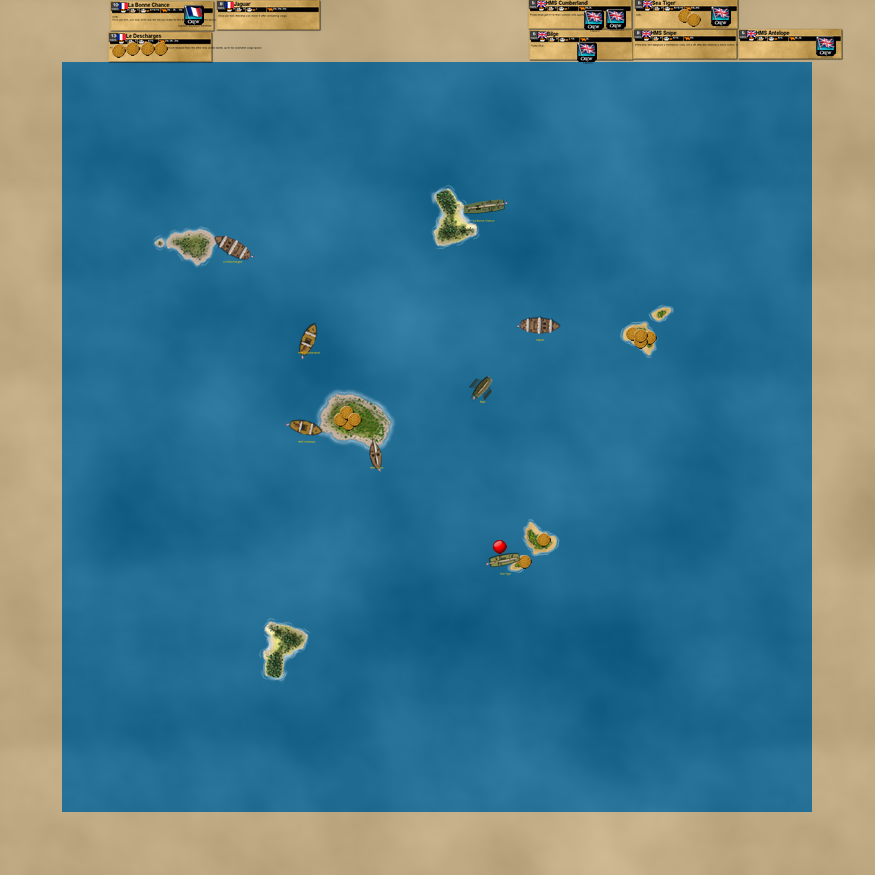 The English strike successfully, but their meager firepower can’t dismast either French ship. 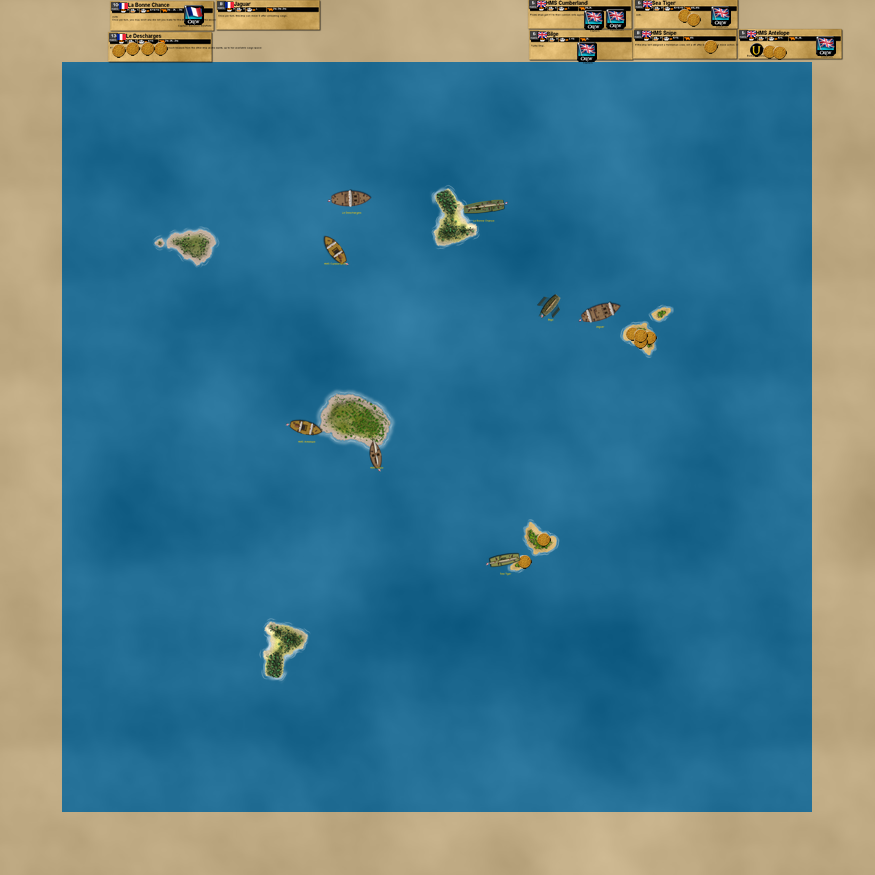 The Descharges docked home 4 coins, while the Jaguar fought back, dismasting the Bilge with a ram.  The English had a windfall with all 3 gold runners docking on the same turn. 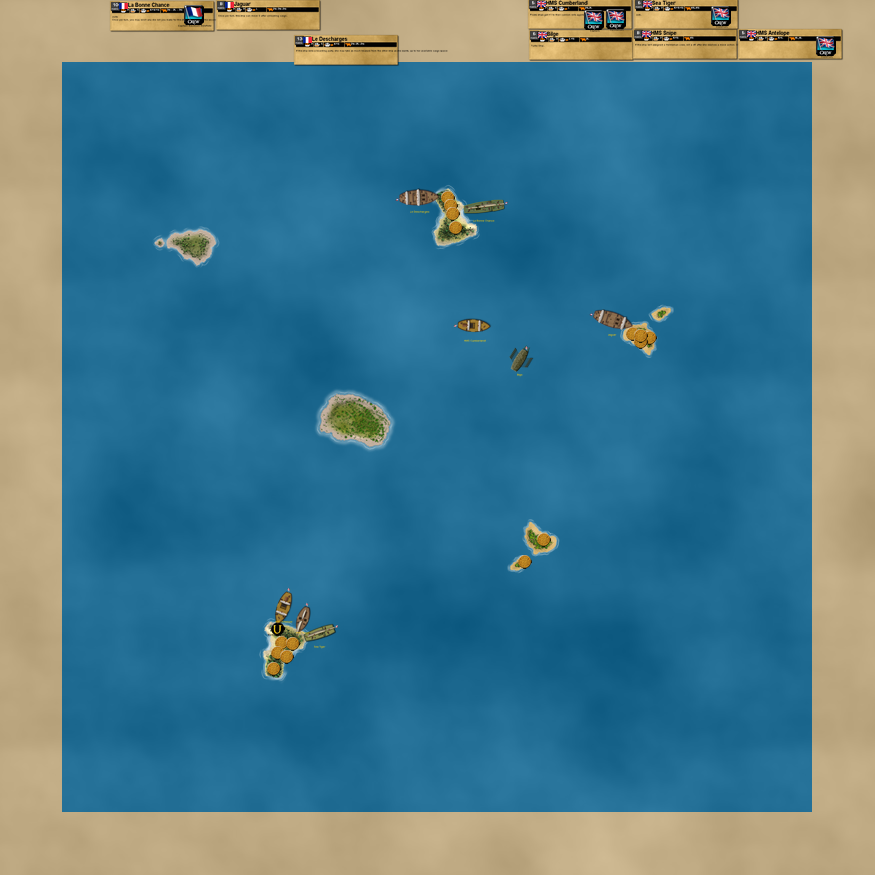 The Bonne Chance finally sailed out, engaging the Cumberland.  However, she was ineffective, only taking out one mast. 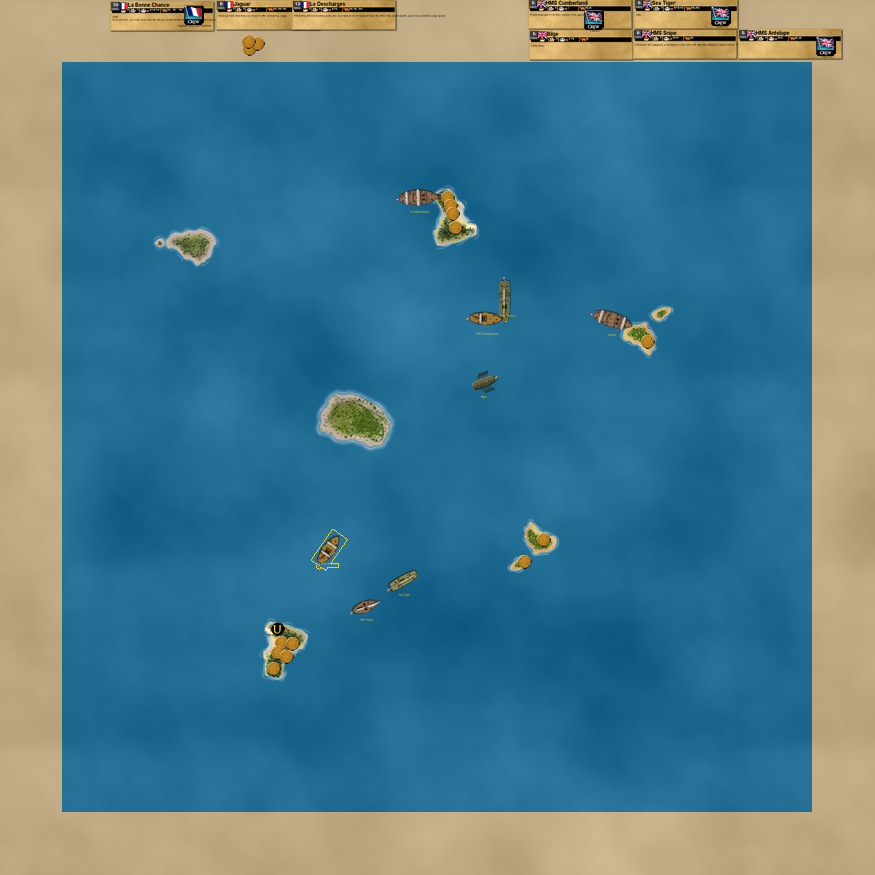 The Jaguar docked home gold, while the Bonne Chance repaired after sinking the Cumberland.  The Antelope tries a ram to distract the Descharges while the Sea Tiger is about to load the game’s final coin. 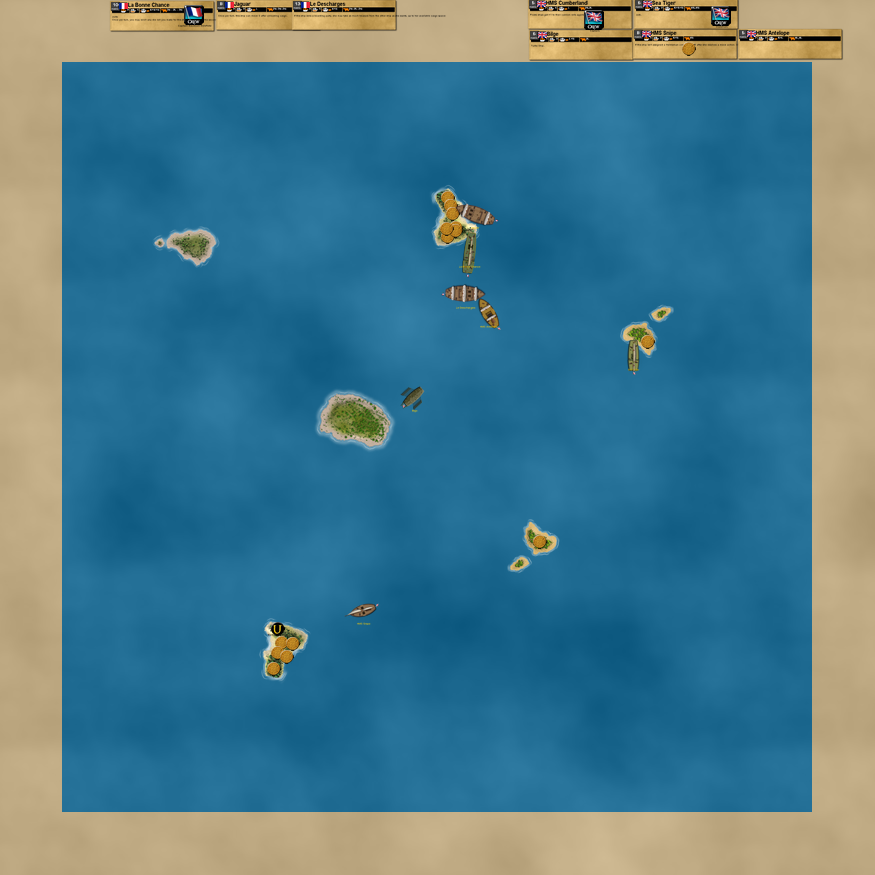 The Descharges sank the Antelope with the help of Deleflote and then stole the final coin from the Sea Tiger! 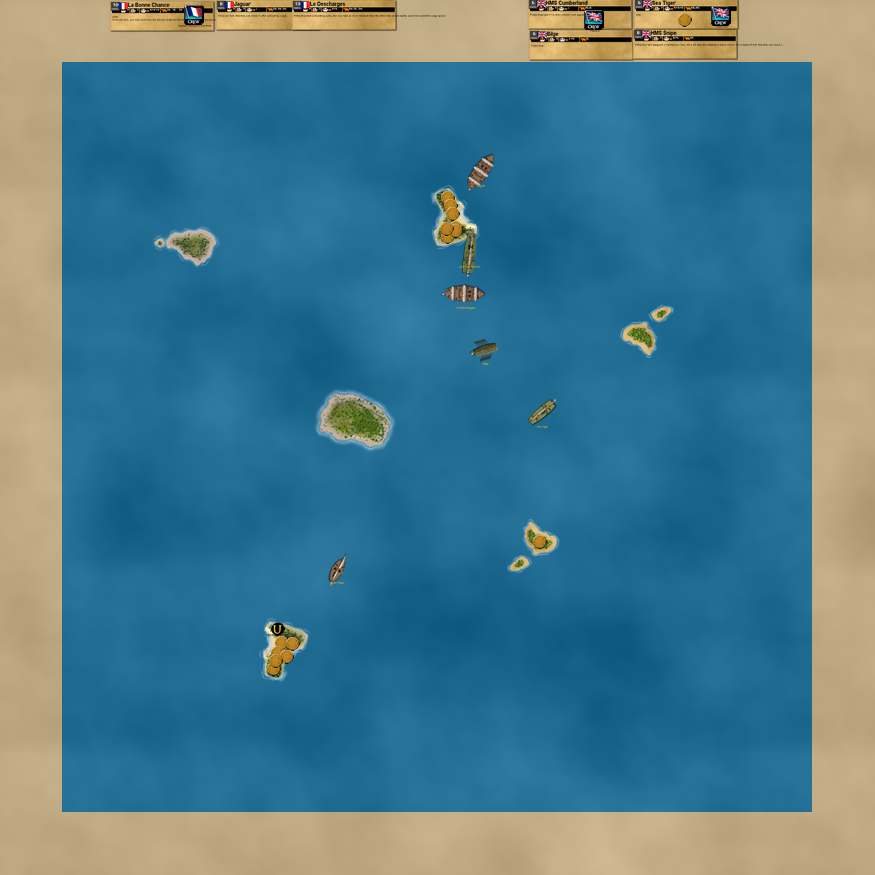 In the end, hiddenelephant was victorious in his return to piracy!