I’ve played another game using CC Mike’s setup tables. For this game (as well as any future ones using the tables), I decided to re-roll any dice that had the same results as before, although no rerolls were necessary today.

I rolled a 4 (free ships totalling 10 masts), a 2 (roll on limits table), and another 2 (no named crew allowed). With no point limit, this would be the perfect game to try out some of those small expensive ships that normally wouldn’t see use. 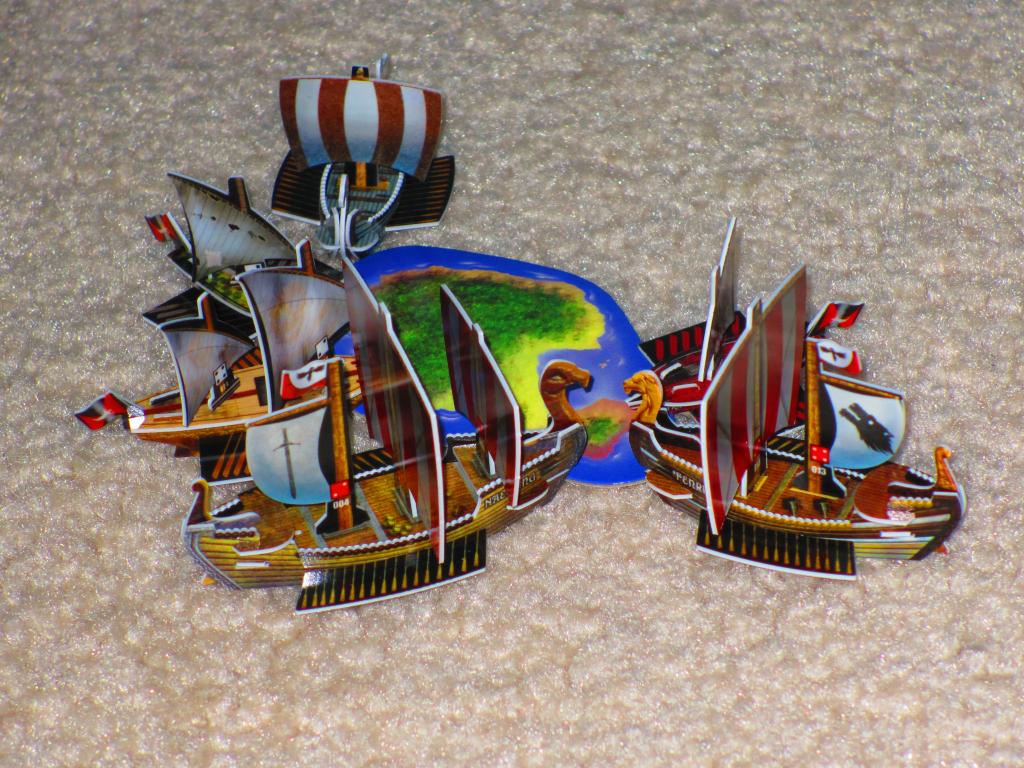 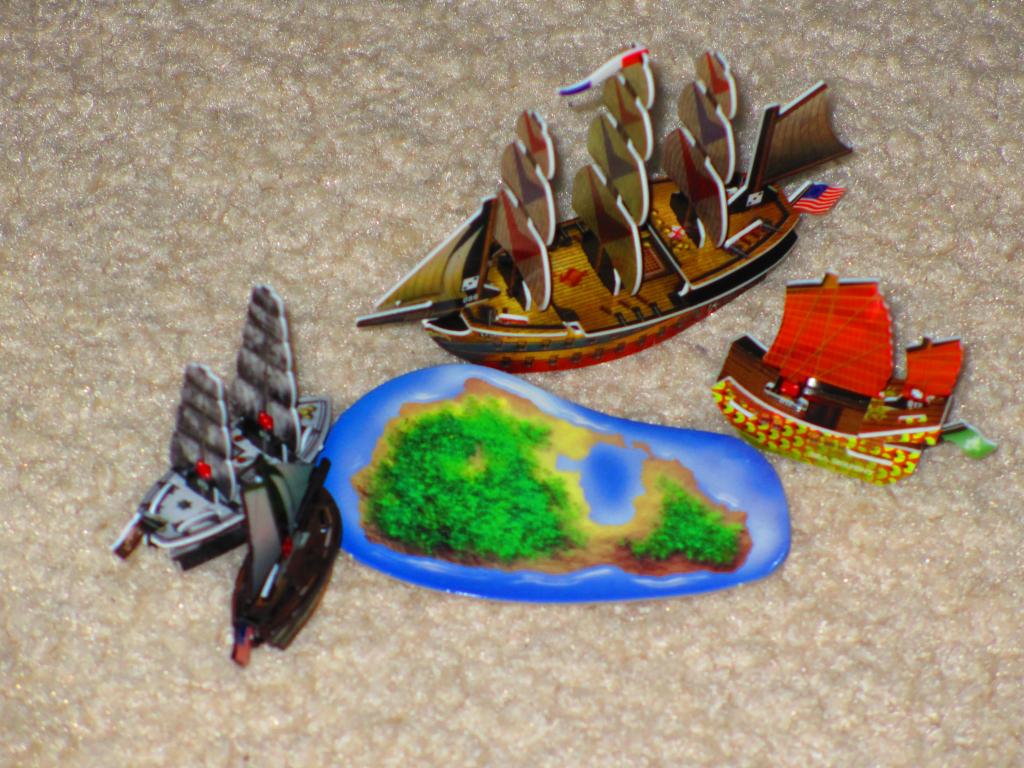 In addition, 3 random UT’s were placed into the treasure distribution.

Turn 1 consisted of all ships spreading out to the islands. Five ships headed for the northeast island, spelling trouble. 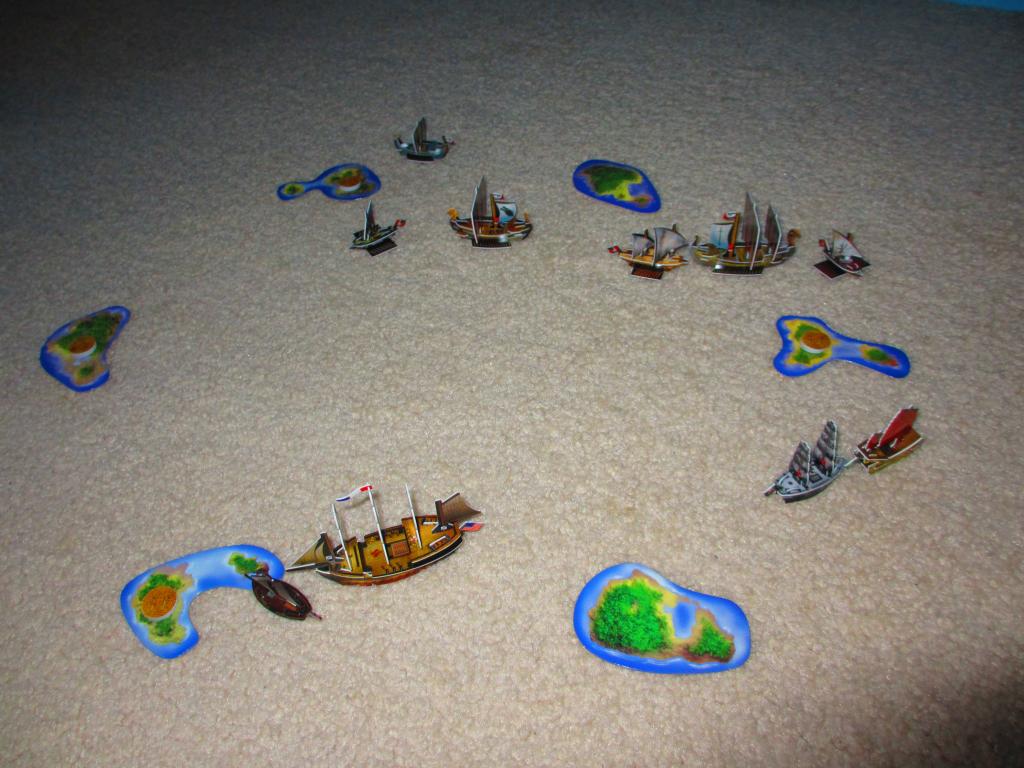 On the second turn, the Sea Serpent explored the northeast island and took 2 coins. The Pale Moon was able to move, shoot, and dock all in one turn, taking out two masts on the Naegling and grabbing another coin from the island. The Tripoli docked at the island as well but had no explorer and so had to wait. The Desert Wind landed a hit on the Sea Serpent, while the Naegling shot away both of the Pale Moon’s masts with her remaining mast using the Longship keyword. The Naegling also boarded the Moon and stole the lone coin she had loaded. In the meantime, the HJ (this is the abbreviation I’m using for the Hlidskjalf) and the Nimcha docked at an island in the northwest. 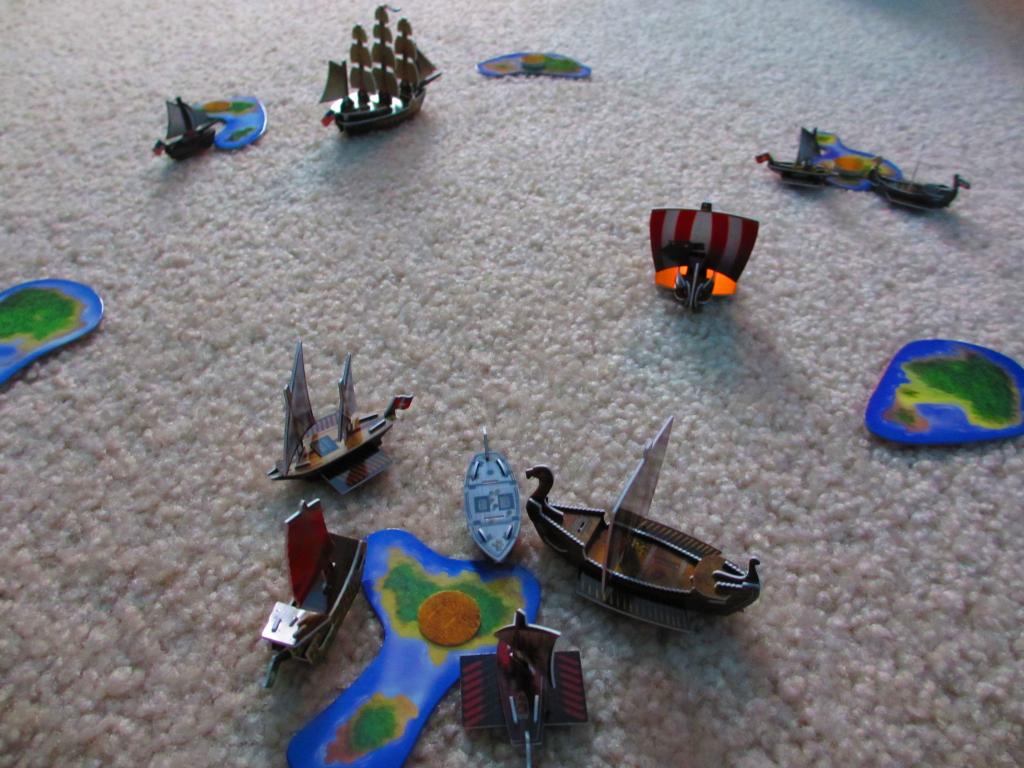 The Lynx was headed home with three coins. The Pale Moon nabbed the last coin from the northeast island before the Tripoli could explore. Because the Desert Wind can’t be shot at within S, the Sea Serpent had to simply sail for home, unable to use her reverse captain ability that would have been perfect for that situation.

On the BV’s (Barbary Vikings) turn, the Desert Wind shot away the last mast on the Sea Serpent and stole one of her two coins. The Tripoli captured the Pale Moon as the Naegling turned home to repair and dock home the coin she stole from the Moon. The Nimcha and HJ explored their island, only to find three 1’s and the often useless Trees UT. The Fenrir, who had previously been playing cat-and-mouse with the Stephens, moved to within striking distance (L+S) of the American HI. 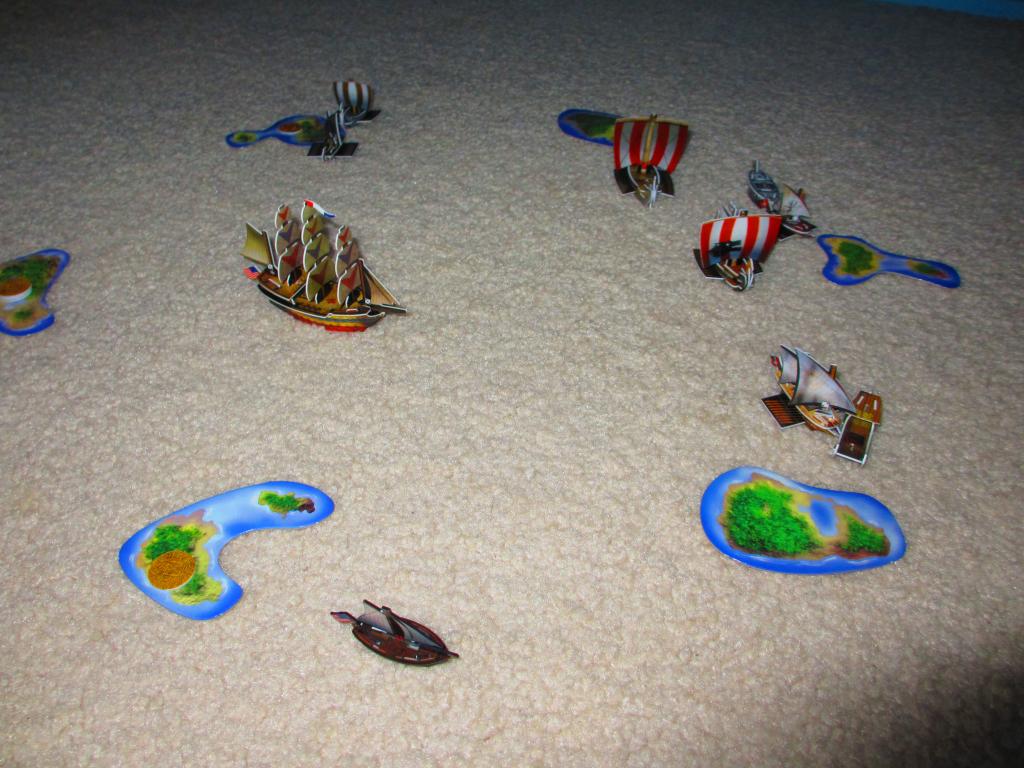 The Lynx brought home her 3 coins. The mighty USS Stephens finally caught up with the Fenrir and maneuvered to get 4 guns in range. True to form, all four of them missed! This left the door wide open for the BV’s, who capitalized on their opportunity. The Desert Wind rammed and dismasted the Lynx. The Fenrir sailed in and stole two of the three coins that the Lynx had just brought home. Finally, the Tripoli ditched the Pale Moon to block the Stephens. The Nimcha and Naegling both docked, bringing home 2 coins for the BV’s. 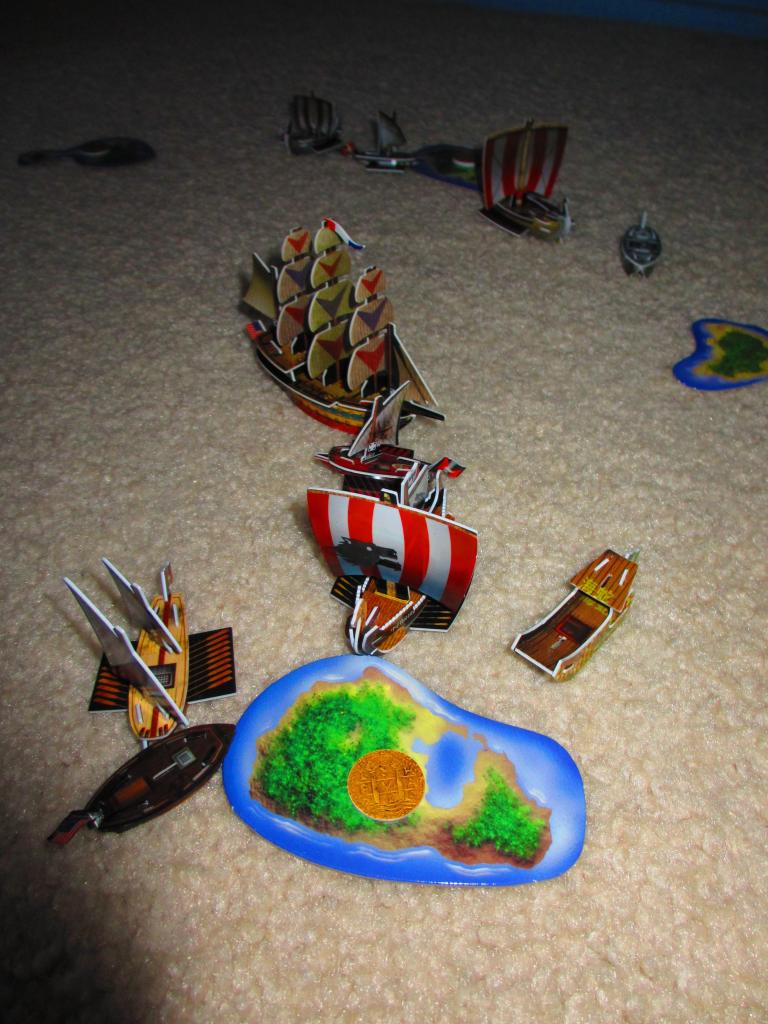 The Lynx repaired her mast, while the Stephens somewhat redeemed herself by going 3 for 5 to sink the Fenrir. The Tripoli captured the Sea Serpent. The HJ docked home 2 more coins for the BV’s while the Naegling spent the turn repairing. 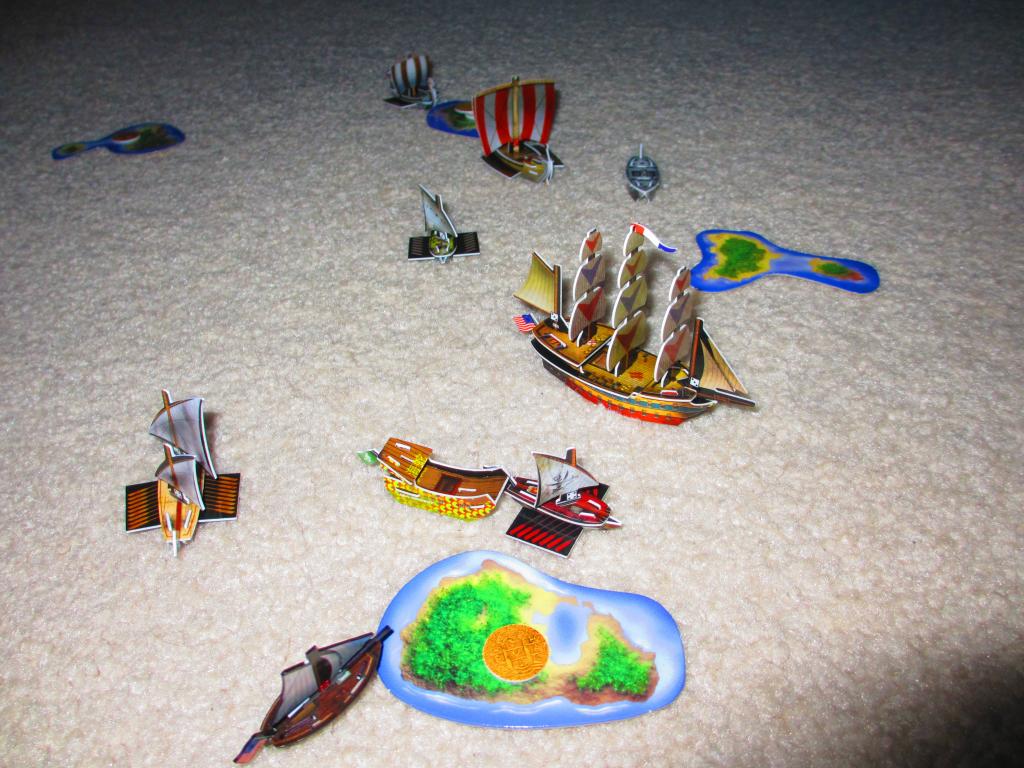 The Americans pulled a fast one by using the Lynx’s lone cannon (4L) to sink the captured Sea Serpent! Since the Tripoli couldn’t be shot at and there were no other ships in range, the Stephens simply turned around.

The galleys ganged up on the Stephens. The Tripoli landed an improbable hit with her 4S cannon, which was followed by the Desert Wind moving in to ram the Stephens. This chaos resulted in another lost mast and the death of the helmsman on the Stephens. To make matters worse for the Americans, the Nimcha sailed up and rammed the Stephens, further limiting her movement. 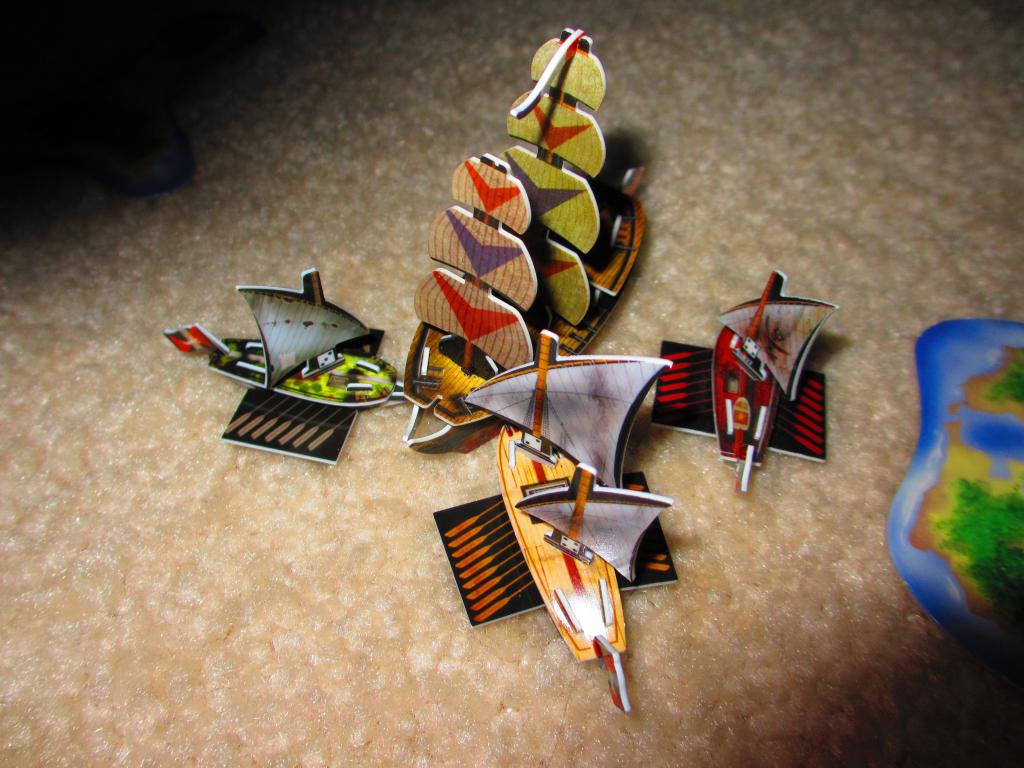 On the seventh turn, the Lynx ran for the only untouched island, while the Stephens dismasted the Nimcha. It was too late for the Stephens, however, as the Desert Wind and Tripoli teamed up to dismast her, upon which she was captured by the Nimcha. 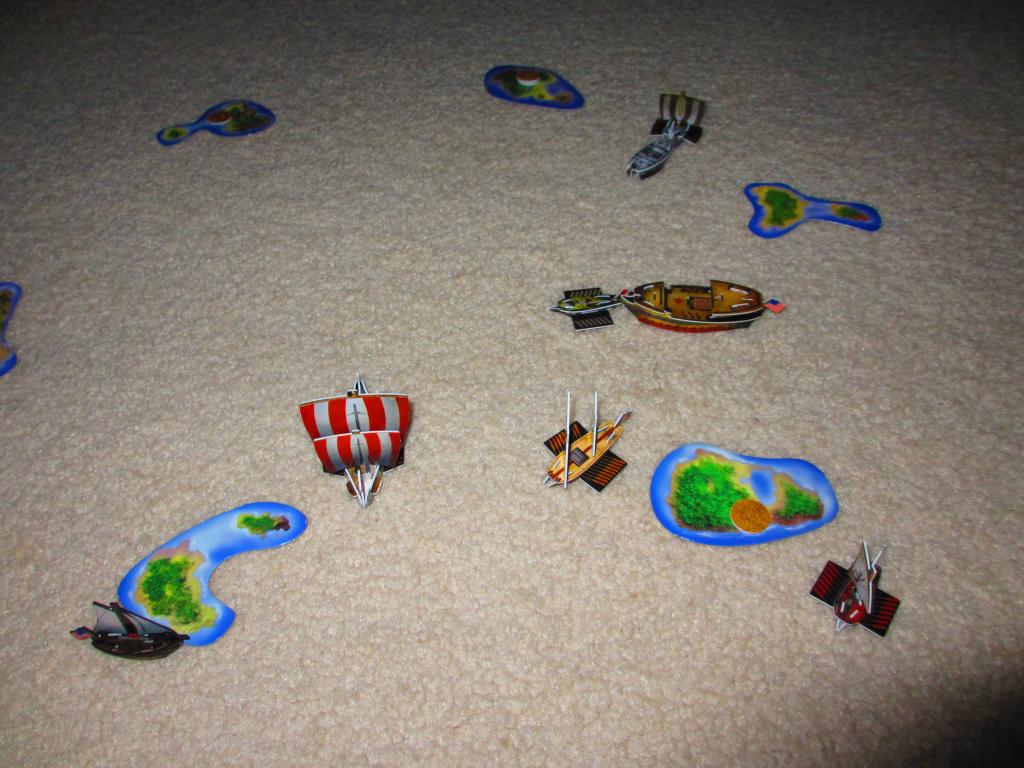 The Lynx grabbed the last coin from the island she had explored earlier in the game, but the Naegling caught up with her and easily shot away her single mast, ending the game!

The BV’s benefited from their boarding and HI-raiding tactics, overcoming the rather low-value coins that they found.
Barbary Vikings: 12 gold
Americans: 9 gold

In addition, there was still 5 gold left on the Desert Wind and Pale Moon, and the Lynx had 1 gold on her when the game ended.