One last game was played using the random setup tables.

Here were the rolls:
5: Roll on Special Set-up 1 table; no Limits
3: 4 free ships, each with a different hull design or number of masts; roll on Special Crew
4: 12 points for crew & events

This setup once again lent itself well to using rather expensive ships, so not surprisingly only one ship was under 12 points. The fleets unintentionally came out quite random, but the focus was on using game pieces that haven’t been used much yet (if at all) and may not see much usage again, while still remaining competitive.

Just like the last game, three random UT’s were included in the usual distribution of 4 coins for 4 wild islands. The islands were once again about L+S apart, with the home islands being close to each other.

Since there was no pattern in terms of nationality for either fleet, I will separate their half of each turn with paragraph breaks.

On the first turn, both the Sea Wind and the Scorpion grabbed gold to the north and east. The Sea Wind found Knights of Malta Banner, which is all but useless to non-Corsairs. The Scorpion found Runes of Defense, but decided against loading it because it would leave space for only one gold coin. The United States and L’Ange de la Mer (abbreviated with LAM) hovered around the Sea Wind.

Calim immediately went into an enraged frenzy! She stayed above the surface and rammed and boarded the United States. The ram was unsuccessful, but the boarding party took out a mast and the American helmsman. The Cheshire explored the southwestern island, taking two coins and Runes of Loki. 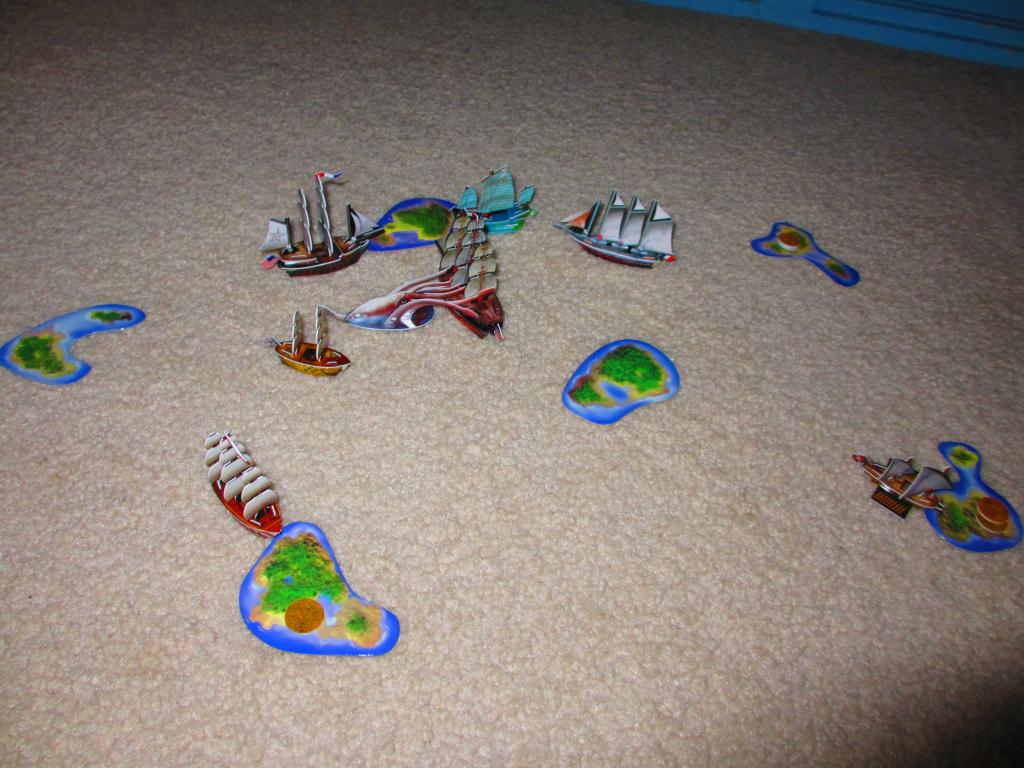 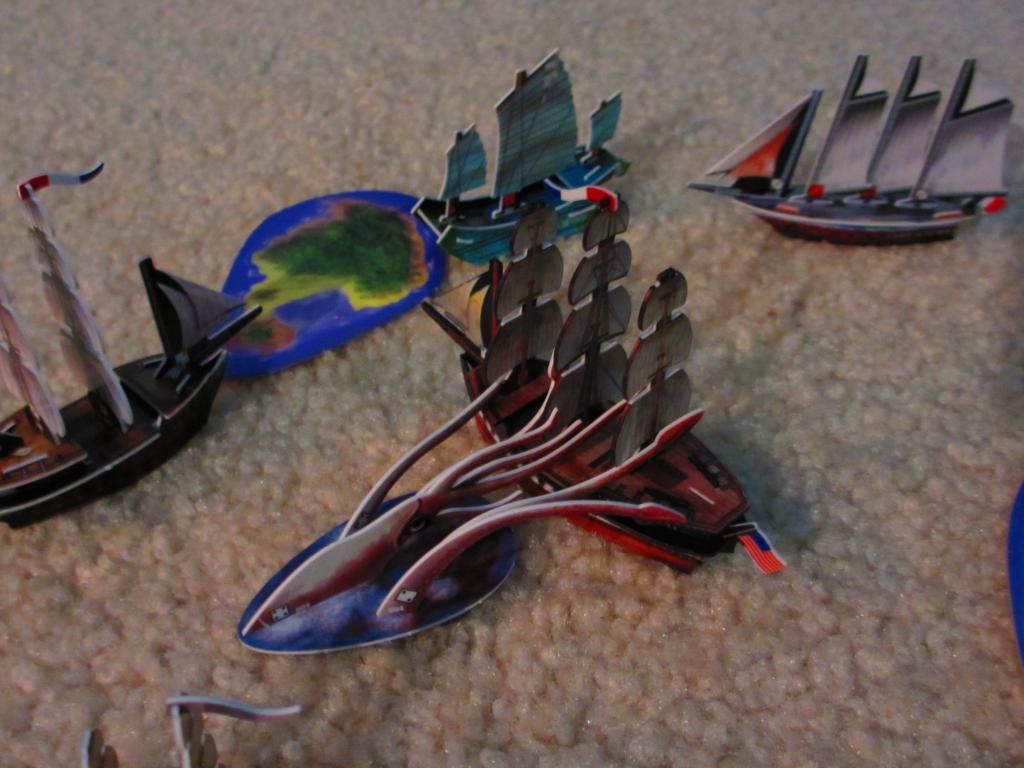 On the second turn, the United States opened fire! Since she was pinned and had her remaining four cannons in range, the Americans decided to go with a Broadsides Attack! With a dramatic flourish a 6 was rolled

, blasting Calim backwards and sending her to the depths! The rest of Calim’s fleet frantically looked in the Code for the ruling on Broadsides Attack in terms of using Runes of Loki as a counter.

Finding nothing, their excitement mounted until seeing the entry for Runes of Loki in the back of the Code:

With that, the matter was settled, and Calim officially sunk beneath the waves. Making the situation even worse for the rest of Calim’s fleet, the LAM maneuvered to take two masts out on the Pequod. The Sea Wind docked home her coins.

(this one reminds me of the end of the second Pirates of the Caribbean movie, when the Black Pearl initially shoots back the Kraken) 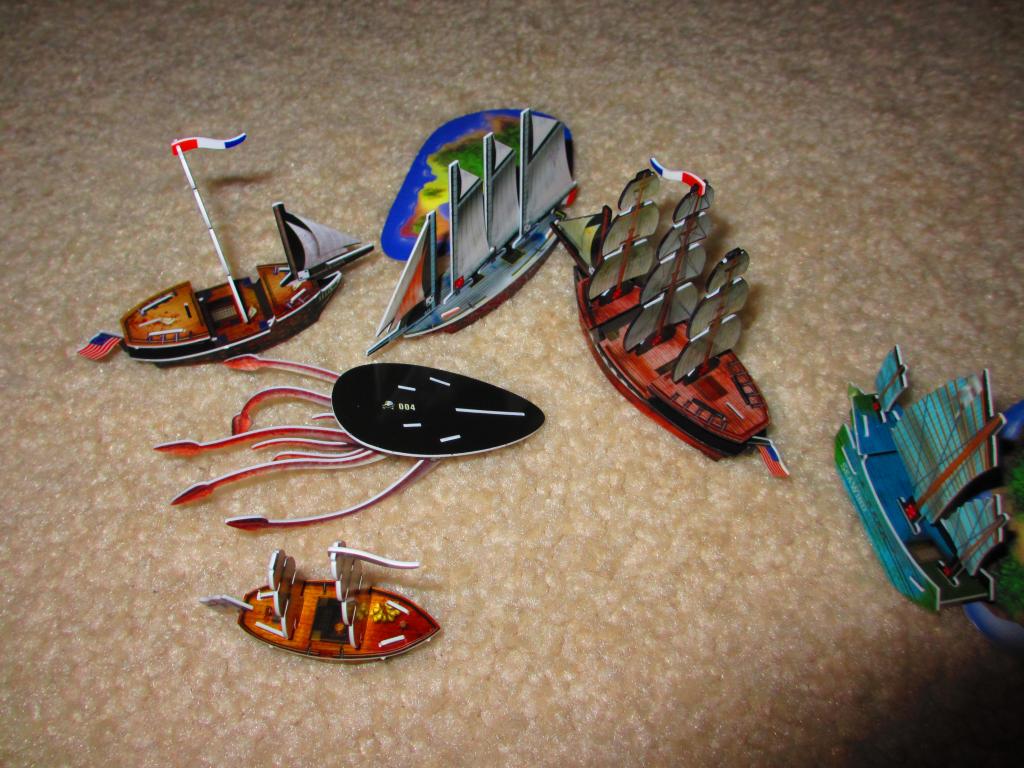 The Bashaw Folly became desperate after the death of Calim. With Celemente aboard, the Mercs were happy to give the Americans some of their own medicine. The Folly rammed the United States and succeeded with her own Broadsides Attack, leaving the United States with just one mast! The ram would’ve dismasted her, but it was a 1. However, the Folly also won the boarding party to kill the US captain, leaving the former five master with no crew. 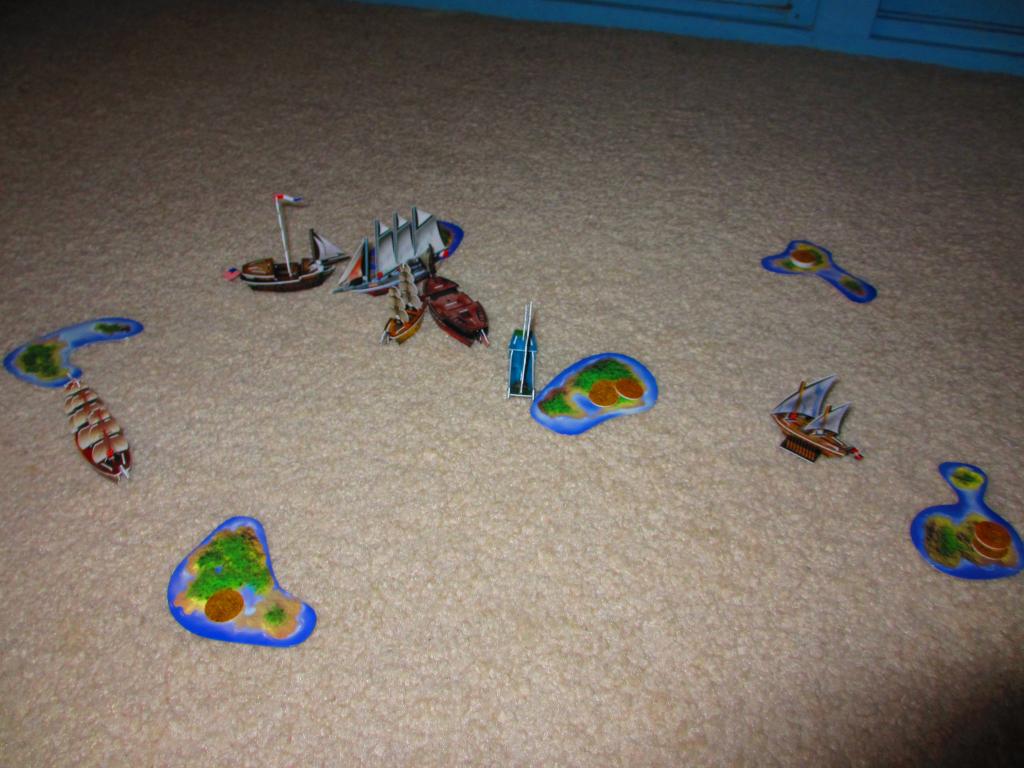 On the third turn, the Scorpion docked home her gold. The LAM scored 3 hits on 4 tries against the Cheshire, but the Cheshire saved herself by using Runes of Loki to negate one of the hits, leaving her with one mast. The United States, now with S speed and unable to move-and-shoot, rolled once more for a Broadsides Attack to try to dismast the Folly. Luck was not with the Americans this time, however, as they rolled a 1. However, the Sea Wind had docked on the previous turn in such a way that two of her three guns were in range of the pinned Bashaw Folly. Since the United States was within S of the Sea Wind, she would get +1 to her cannon rolls. This meant she needed fours to hit, still an improbable task considering the lack of luck with the dice. However, she rolled two 4’s and dismasted the Folly!

In the meantime, the Cheshire docked home her 2 coins, while the Pequod rammed away the final mast on the United States.

The fourth turn saw the LAM sink the Bashaw Folly. The Pequod rammed the LAM but lost both rolls. The Cheshire repaired a mast. 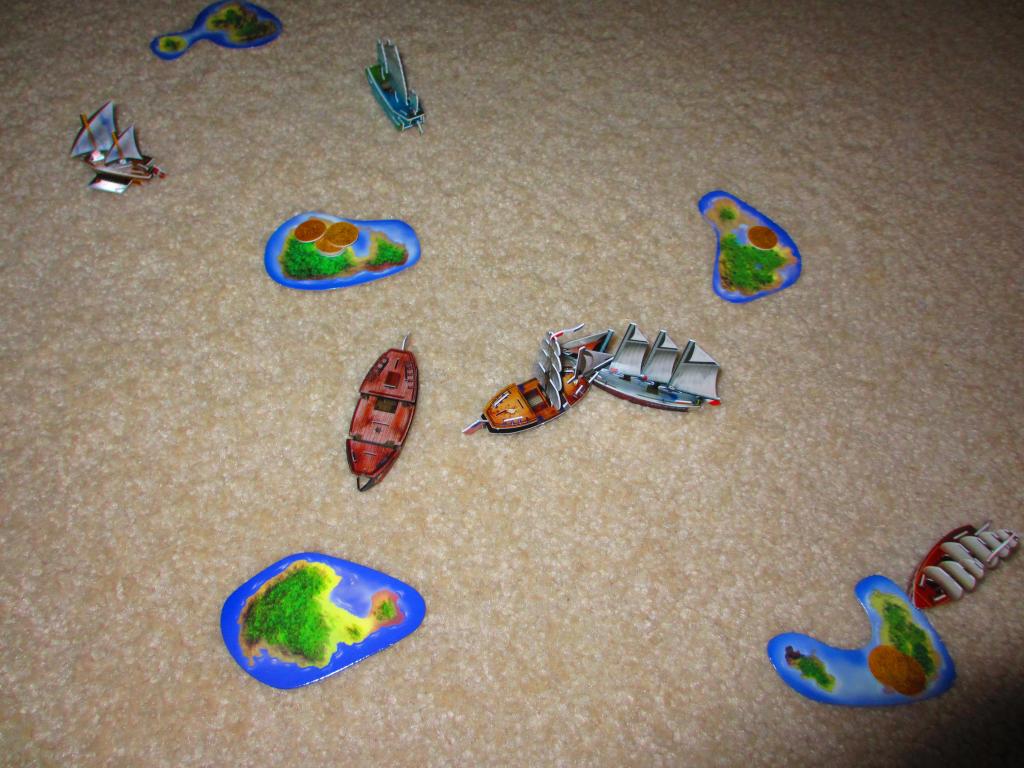 On the next turn, both the Scorpion and Sea Wind went back to wild islands, while the LAM sank the Pequod.

At this point, the Cheshire had to concede defeat, while stalling tactics would only result in the other fleet gathering more gold. She sailed out to take on the LAM, who promptly sunk her to end the game!

This was the last game for now, but I’ll be able to play again in about 3 weeks. That’s when things will really rev up.