I was able to play a game just now! This was the first game since late September, but it doesn’t feel like it’s been two months, probably since the previous hiatus was so much longer.

For this particular game I decided to use Cadet-Captain Mike’s random setup tables. I rolled a 1 (30 point fleets), a 4 (no limits), and a 3 (no crew limits or bonuses). Basically a simple 30 point game (like back in the SM days 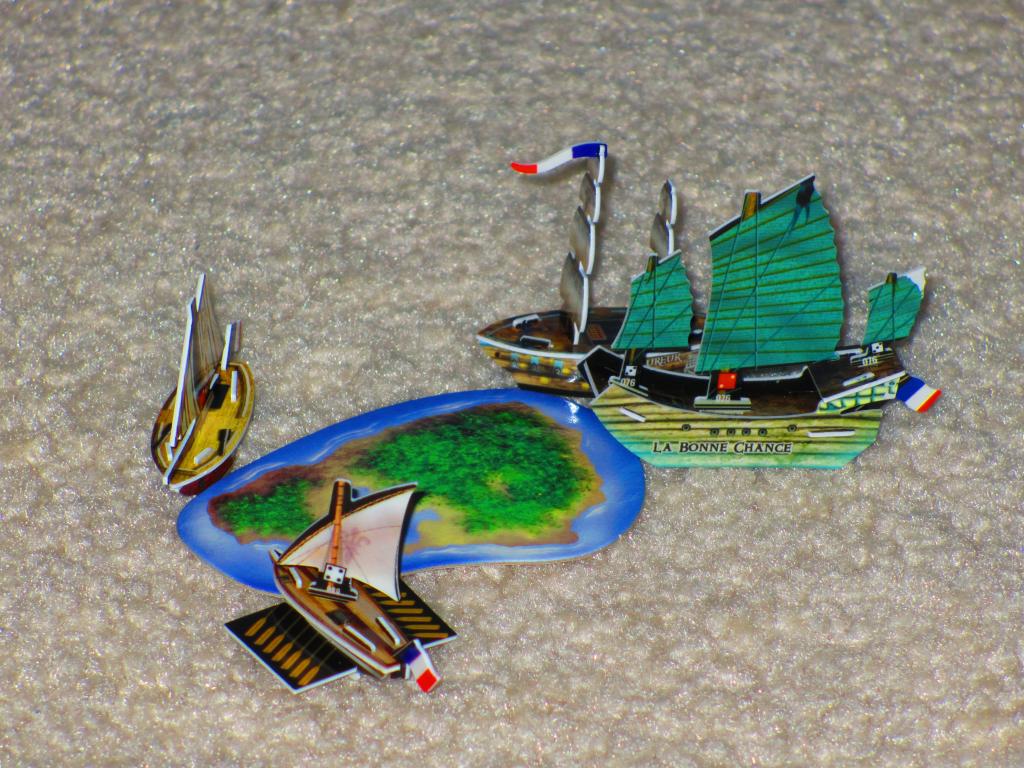 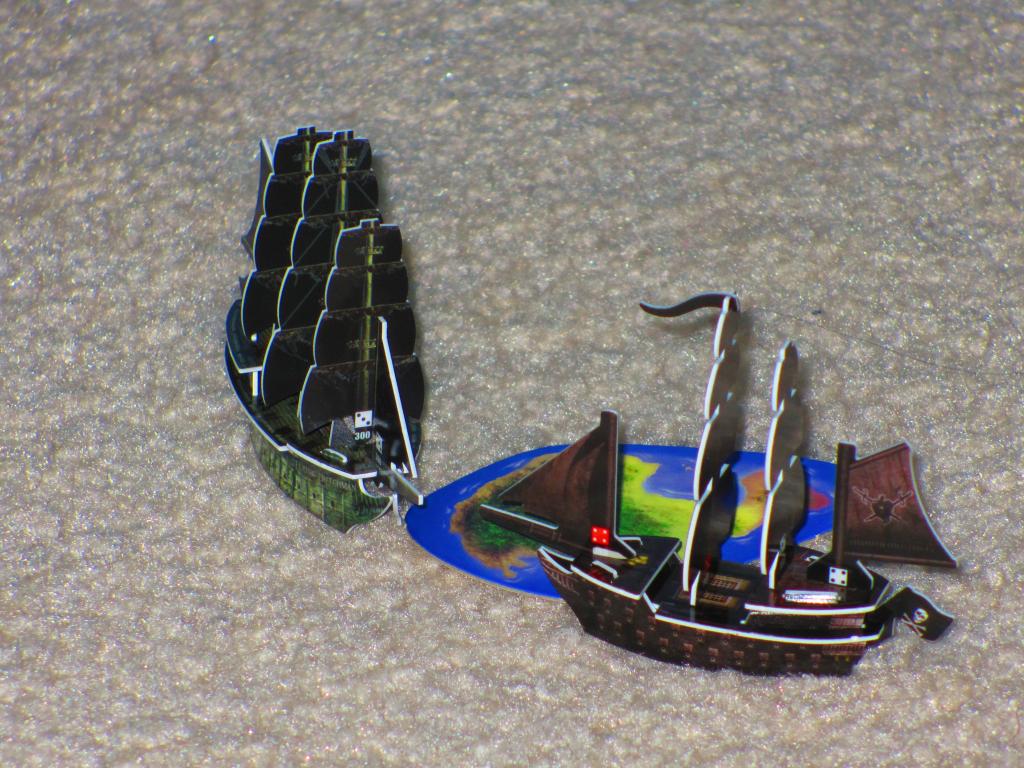 You can see that the French were going for a setup favoring multiple smaller ships while the Pirates set sail with two large ships. The low point limit lent itself well to using the Bonne Chance and the Flying Dutchman, two of the cheaper gunships in the game.

It had to be a quick game, so no terrain and UT’s were used. However, for the first time I was conscious of implementing woelf’s house rules, which I have been interested in for a few months now.

For this game all but number 1 was used, because of the random setup table. For the future, there probably won’t be much variety in terms of gold because the extra-light pieces are few and far between in my collection and therefore it’s easy to see which island has a particular treasure value. I hope to use silver explorers in fleets more often. I don’t have any transparent gold. Events aren’t too popular (if you couldn’t already tell

) unless I’m purposely testing out fleets that are supposed to win every game – Norvegia, Hai Peng combos, etc, etc. On the other hand, I very much enjoy using forts, although sadly they don’t see much action in small and fast games.

The Pirates were the first player, and the French picked a home island for them to the east. The Pirates picked the middle island to be the French HI. In addition, although the ships weren’t from the Spanish Main set, I wanted it to be close to an “original” game, so the islands were placed 2L apart. In general, the closer the islands are to each other the better. Also, now that I think about it, there was no terrain in SM, so it’s actually good that there wasn’t terrain in this setup. 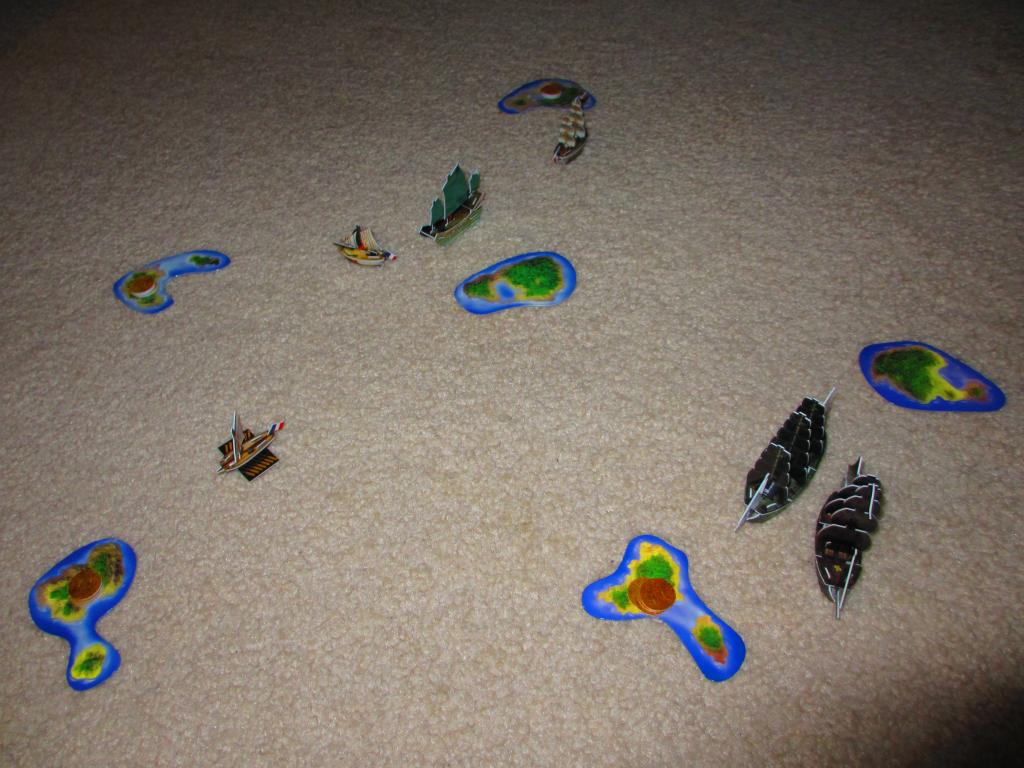 On the next turn, all four ships designed to carry gold docked at their islands. However, only the Pirates could load gold since the Black Heart was the only ship with an explorer. This left the St. Joan a potential sitting duck for the nearby Dutchman. 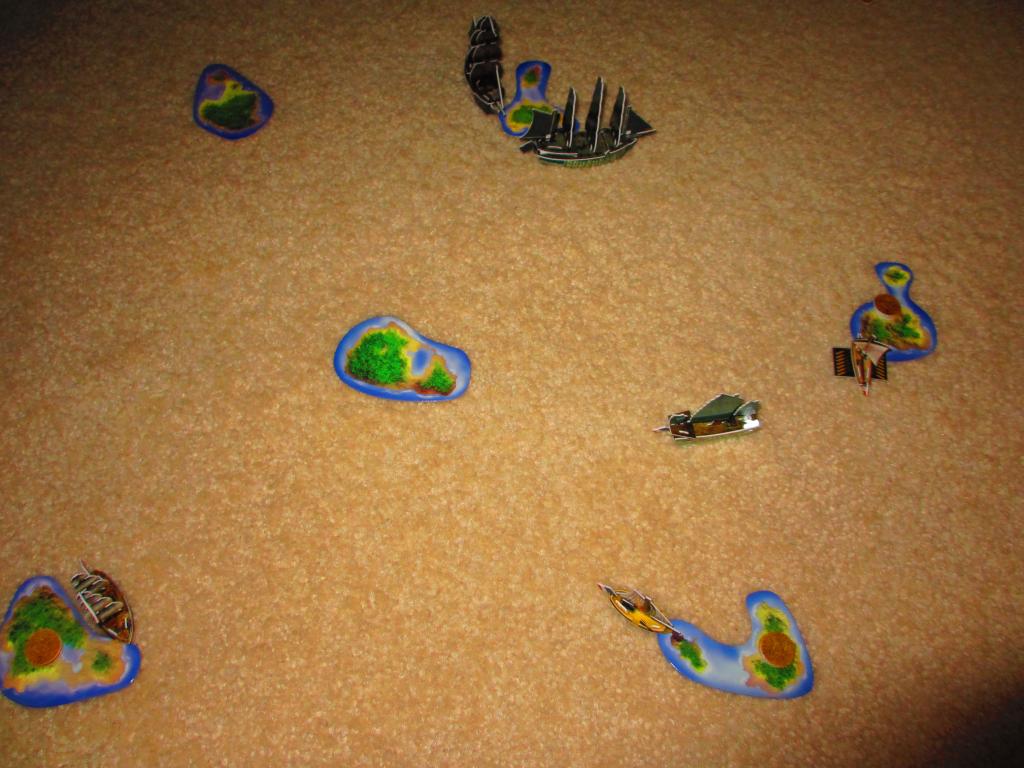 On the next turn, the Dutchman sailed towards the docked St. Joan, who would explore later that same turn. The Dutchman’s speed of L+S and S-range cannons weren’t enough to reach the St. Joan, but the Pirates sailed straight for her anyway because they needed to make a move before it was too late and the French runners got home. Also, the Bonne Chance has only three masts against the Dutchman’s five, so the Pirates were willing to take a hit or two if they could cripple at least one French runner.

The Marianne and Fureur loaded gold as the Black Heart sailed home with all four coins from the southeast island. However, the Bonne Chance moved to counter the Dutchman just as the Pirates expected, taking out one mast in a rather unsuccessful shoot action. 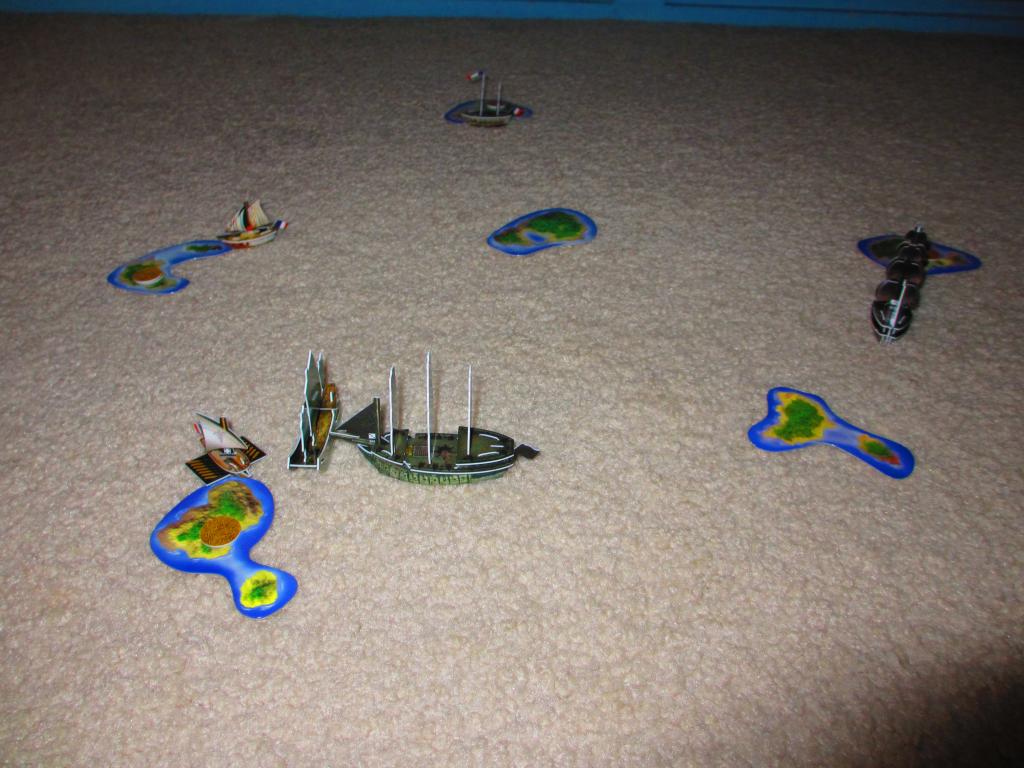 The Dutchman was only partially blocked and was able to maneuver around the Bonne Chance and get her remaining four guns in range of the St. Joan. The Pirates were thinking their gamble had paid off, until the Dutchman missed all four shots!

The French followed by moving the Bonne Chance out of the St. Joan’s way and simultaneously using her captain to take out two more masts on the Dutchman. The Dutchman’s ineffective guns proved to be the turning point in this game. In the meantime, the Black Heart docked home her gold as the Marianne, Fureur, and St. Joan all headed for the French HI. 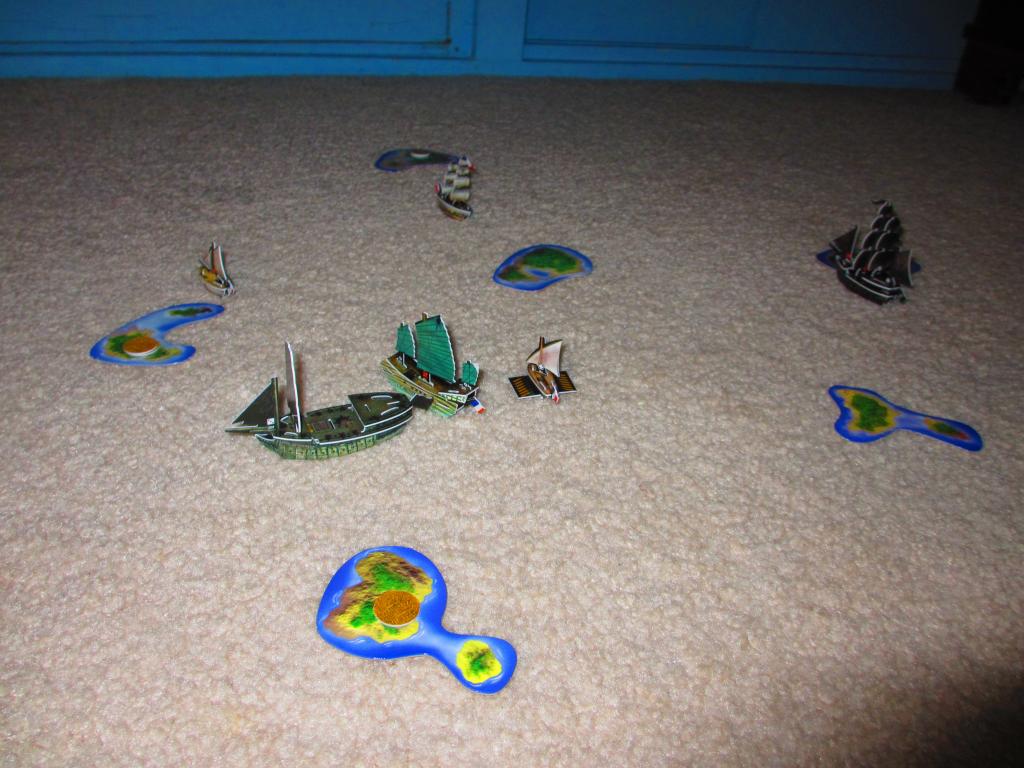 With the Dutchman in need of help, the Black Heart headed west. The Dutchman, with only two masts remaining, turned to desperate measures and ignored the dangerous Bonne Chance, heading north and finally succeeding at a shoot action by dismasting the Marianne. The French triumphantly dominated on their turn, with the Bonne Chance sinking the Dutchman with the help of her built-in reroll, and the Fureur and St. Joan docking home 5 coins. 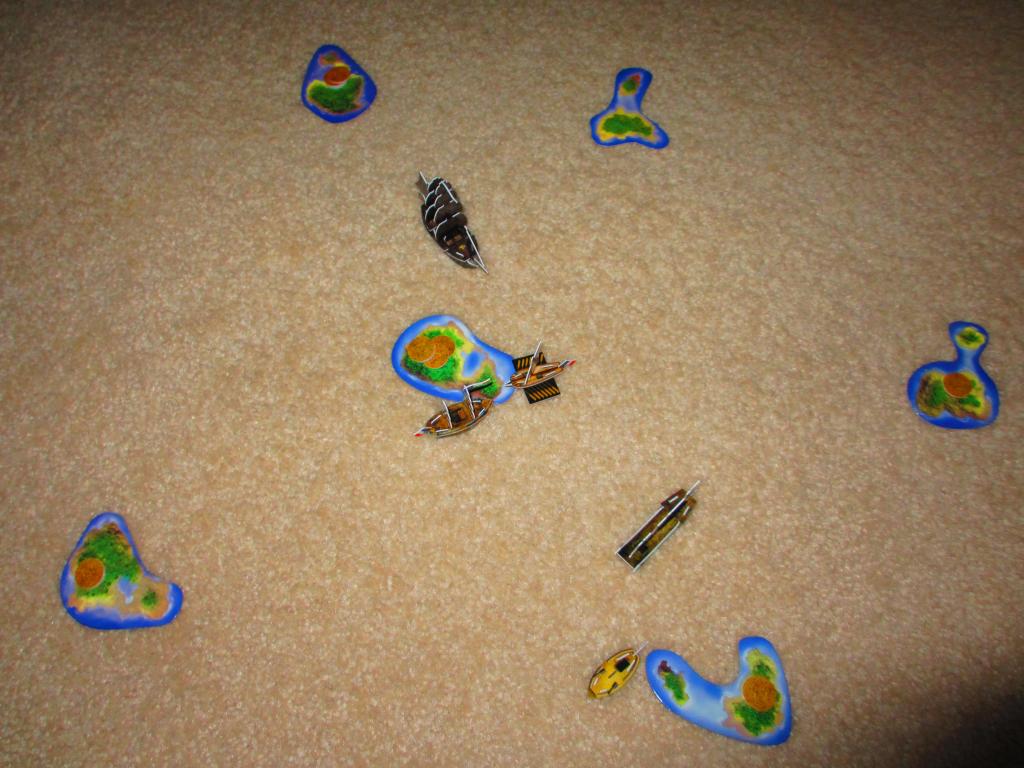 With the St. Joan and Fureur docked, the Black Heart surprised the French by suddenly reversing course and heading north towards the island that the Fureur had explored. The Fureur and St. Joan headed west to tow the Marianne and grab the gold from the island that the Marianne couldn’t get on her first trip. The Bonne Chance shadowed the Black Heart, wary of her size and identical built-in reroll ability. 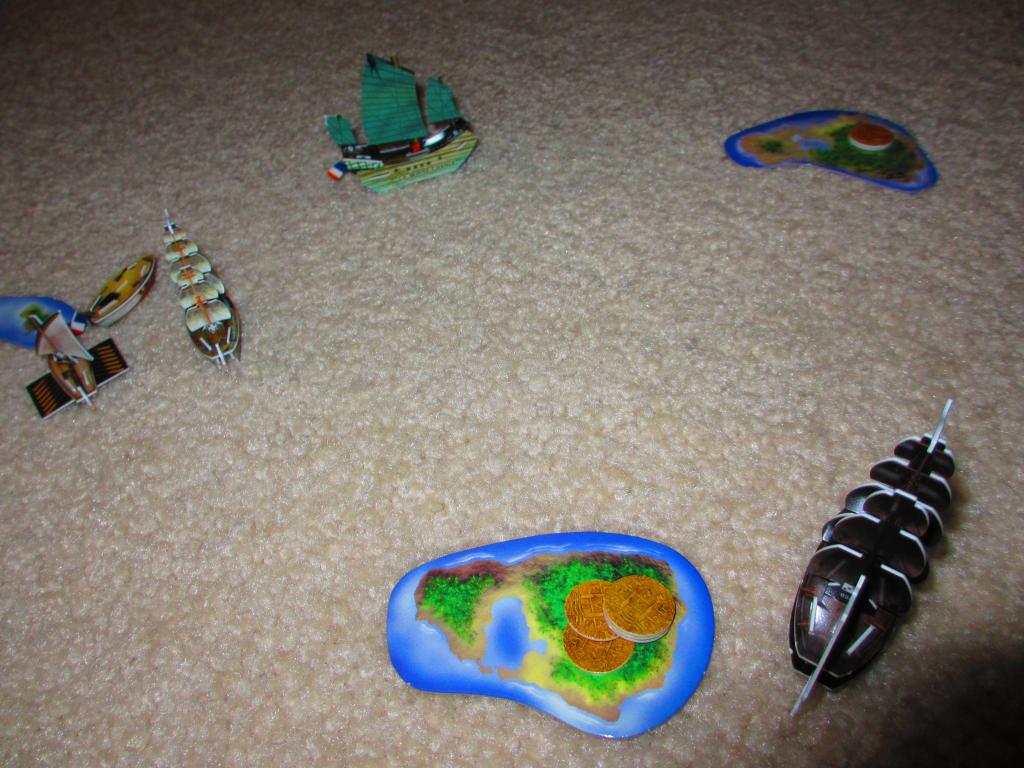 Once again, the Black Heart changed direction. She went after the St. Joan and Fureur, but the Bonne Chance was too quick for her. The Bonne Chance caught up to her and shot and rammed away all four of her masts, ending the game! 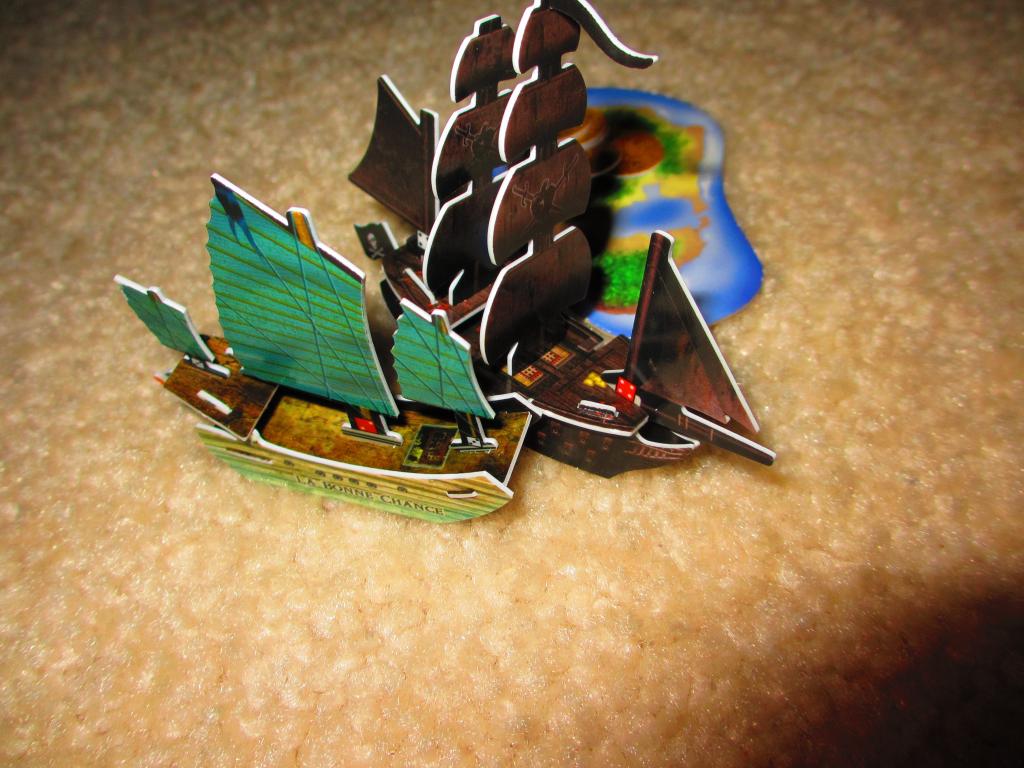 The gold was tallied up, with the French receiving much higher values on average than the Pirates.
France: 21 gold
Pirates: 8 gold

Although a bit lopsided, this was an interesting game that marked a return to the old-school 30 point format. Hope you enjoyed it!