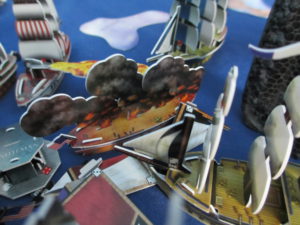 The Bombardier sets the Paul Revere ablaze during Economy Edition!

This is more a collection of combos than an actual fleet. It’s meant to strictly maximize how many enemy ships burn to the waterline, and wouldn’t do well at all in a competitive deathmatch setting. Most of it was inspired by my Economy Edition game.

The Bombardier is the flagship, and the only ship here capable of setting up to 4 fires in one broadside. Some cargo wizardry with Ismail and Gunn is required to make it work, but it turns out to be a pretty nasty setup. Every single cannon will be blasting fire.

The second ship is a little slow, but the Conquerant will receive extra actions between her ability and Godiva rerolling it. Arathiel doesn’t have much to sac, but the ship has the potential for up to 3 fires created.

The Grand Vainqueur is a terrible bombardier compared to the others, but her crew setup makes her pretty dangerous.

Dumas is a proxy for Lady Roimata from Return to Savage Shores:

Lady Roimata
RtSS-043, Super Rare
French
Points: 6
Link: Fetu
Ability: Captain. Once per turn before you give this ship an action, roll a d6. On a 5 or 6, this ship can be given the same action twice.

The cannoneer ability should help start as many fires as possible.

The Salient is a fun switchblade, and here she’s set up quite well. Her guns are 2L x4, and 2 of them will be firing equipment pieces each turn at that long range. Her blades make her a boarding problem for opponents, and she should be able to wreak some fiery havoc.

HGold combines the captain+helmsman abilities into one cargo space to allow the now-standard 3x fire weapons to come aboard.

I originally left the fleet at that, but of course the Gallows is the perfect ship for this theme: enough cargo to hold all 3 fire weapons with a captain and helmsman, L-range cannons to take advantage of the equipment, and great cannon ranks to start as many fires as possible. In fact, with this configuration, the Gallows is all or nothing. She will be starting fires on enemy ships or on herself!

At 191 points, I quickly brainstormed how I could possibly get another good fire ship in there. The Pique is perfect – no need for a helmsman, easily fits a captain and fire shot aboard, and can hit effectively at 2S with the equipment or take potshots at S+S range until the major help arrives.

Once again, more of a theme fleet than a practical 200 point deathmatch fleet, but certainly some “fire” for thought if you’d like to try out one or more of these combos someday.