When The Dutchman Attacks 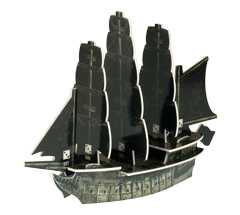 I like the 001 version of the Flying Dutchman because her high point cost and large cargo hold let you put a lot of great named crew aboard. Besides, who doesn’t like that combo of abilities?

The premise is relatively simple: Calypso creates whirlpools, and the FD is immune to them when teleporting. Cat’s SAT (along with Calypso if needed) is augmented by Griffin’s reroll, and lets the ship go into a whirlpool and come out shooting on the same turn. Home island and wild island placement is important; the closer everything is, the better. Lucky the Parrot looks for which enemy ships have the most or best gold aboard. The FD pursues and sinks them. Lucky and the oarsman help with lost boarding parties, and the oarsman makes Eternal more effective.

This fleet could work at 39 points, but since most people expect some kind of treasure running ability, I went the ultra-cheap/ultra-cheesy route and got the tried and true Jolly Mon/Hag + BC + Mermaid combo. Sorry. XD

This is mostly about the Dutchman combo though. It would be fun, though I have doubts about how long it would last heh. Anyway, let me know if you like the fleet!  Where will you be when the Dutchman attacks??