Play continued, although only for about half a turn. That’s because activities in the Sea of Allost alone took about 2 hours, mostly due to a Pirate megalaunch!

Turn 49: new resource rolls! I was a bit disappointed to get a 4 for values, since I still haven’t rolled a 1, 2, or 6 for values. In fact, the last 5 changes including this one have all been rolls of 3 or 4. However, the duration was a positive – only 3 turns, the shortest duration of the game so far! This continued a trend of resource changes lasting less and less time – the first 5 changes were all for 6 turns or more, but the last 3 have been 5 turns or less. The value change meant that metals were the most valuable resource again! The Spanish rejoiced! The other factions were generally fine with the change, with textiles valuable as usual. The Cursed and JR saw their values drop even lower, but it’s doubtful that it will stop them from waging all-out war on each other…. 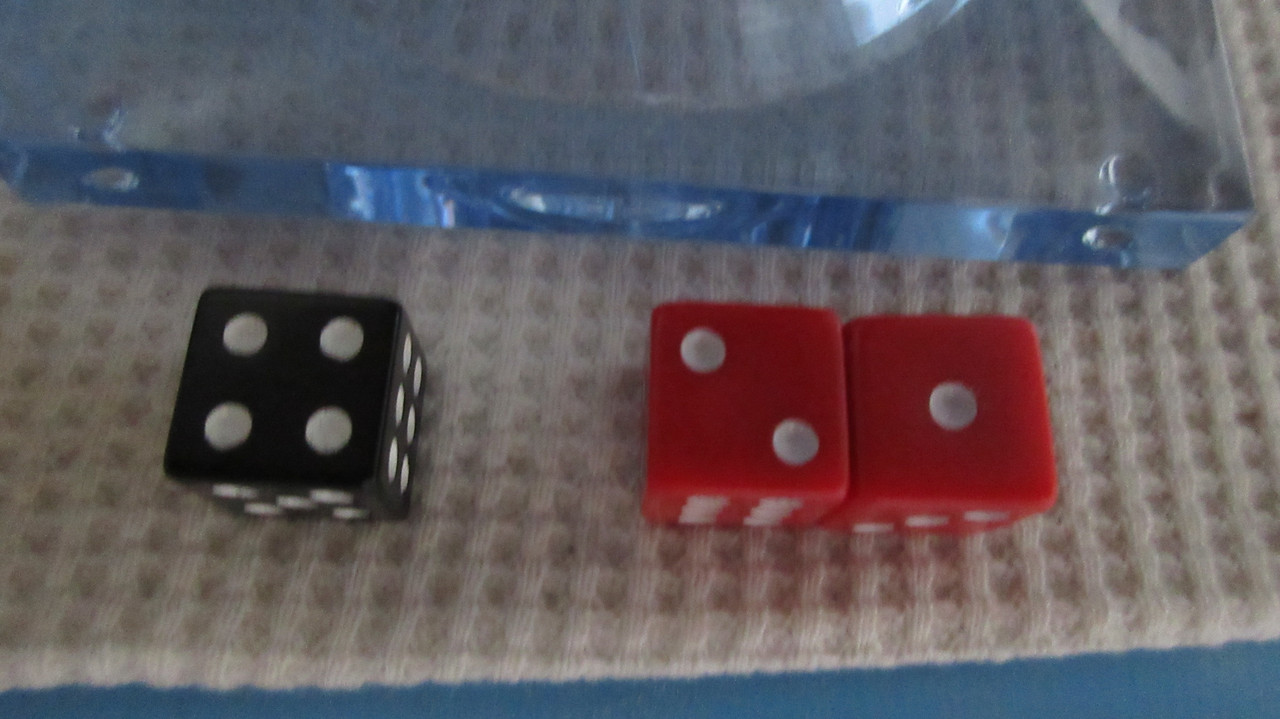 The Pirates! They combined some saved gold with new gold via cashed in metals and textiles, and also cashed in a ton of saved up metals! With a massive windfall, the Pirates suddenly have 393 gold, and they spent every ounce of it. O_O

The next 3 pictures show what the Pirates got for the biggest single-turn purchase of the game so far. They could basically buy whatever they wanted, and with a very effective resource system already in play and more cargo ships only making more logjams at the kingdom’s entrances, they bought gunships almost exclusively! Three capital ships were launched, which will be the flagships outside of Mission’s command from the Crusher. The Harbinger and Victoire have sac abilities and a combined nine oarsmen between the two ships, providing for massive extra action potential. The Revenant will also be extremely deadly, with Griffin rerolling Calico Cat’s EA and firing her cannons at rank-1 with the standard captain/helmsman combo also aboard of course. From the top left on down you can see more standard gunships with the regular crew complements in addition to the random specialist/cannoneer/musketeer crew. The Rum Runner with HI-raiding Villanueva aboard is the only ship the Pirates launched that doesn’t have a captain aboard! 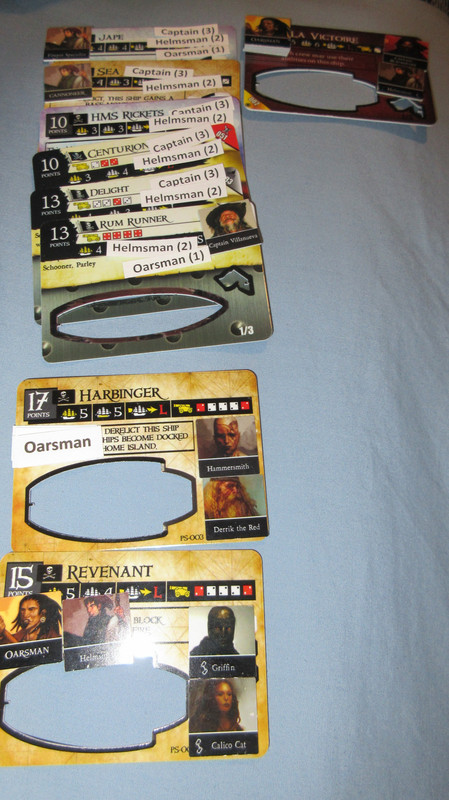 The spending continues, with ship after ship after ship brought into play via the spending spree. The Ballista is well-equipped to be a very effective suicide attack ship, while the 2 masted Pirate support gunships I love so much are outfitted to the max. For example, the Raven is a 10 point ship but carries 5 crew for the maximum 10 total points! I like pairing specialists with 2S guns (since you don’t have the shorten the range of an L-range cannon) and shot equipment with L-range guns (since you can take advantage of the extra range). The Raven, Royal James, Executioner and Panda are some of my favorite Pirate ships. Also, it’s worth noting that the Freedom’s Hand will be towing the Pirates’ second copy of the Widowmaker flotilla to have 6 shots at S+S range moving around at S+L speed. Nice combos everywhere! 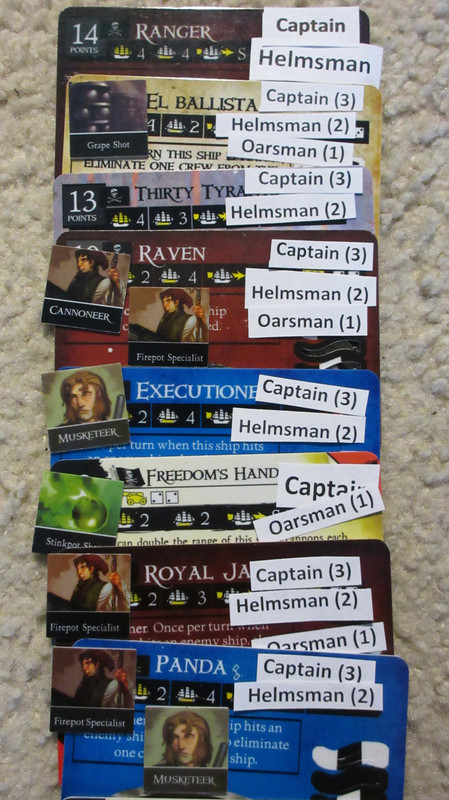 I’ve generally memorized the stats and abilities of most or all the ships I have over time with my 400+ games played and time spent making fleets on Miniature Trading, so I can afford to cover things up and save space in the deckplate areas (which I need since they are very crowded already with how massive this game is getting!). 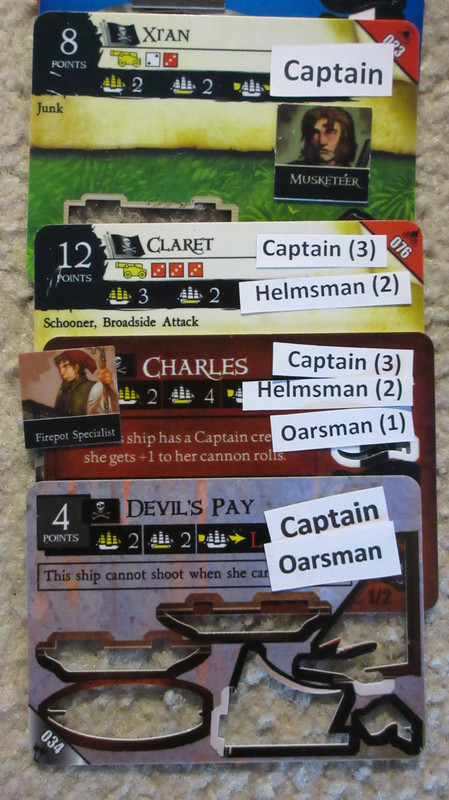 Only a few turns after being completed, the fort upgrade comes in VERY handy!! Without that option, the Pirates wouldn’t even be capable of launching all 393 points’ worth of stuff, so they’d have to split it up into smaller launches over more turns. That said, this launch was so big that the fort is completely covered with new ships! They are beginning to look like the Pirate fleet from my Economy Edition game, a Pirate Empire that was previously unrivaled in historic size. However, with how this game is going, Mission’s Pirate Kingdom may even exceed that!! 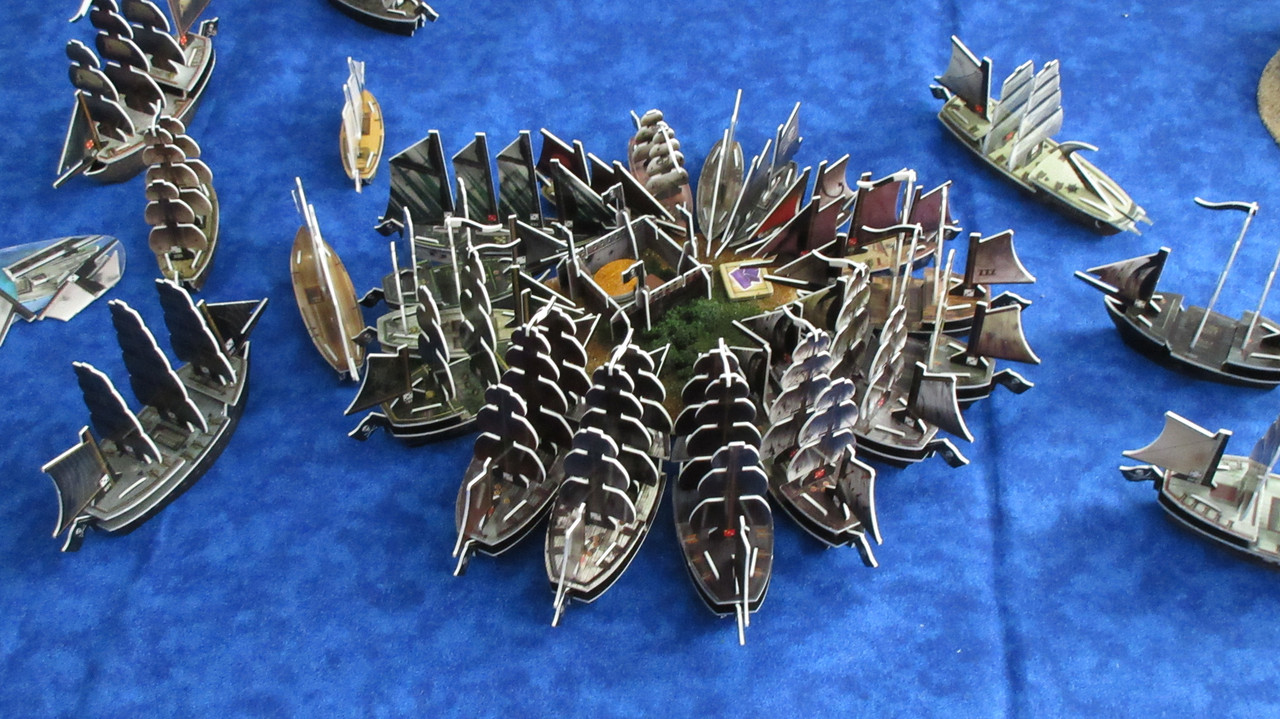 The launch was so big that they couldn’t quite fit all the ships at the upgraded Dead Man’s Point, so the Rum Runner, Charles, and Xi’an are berthed inside the kingdom. 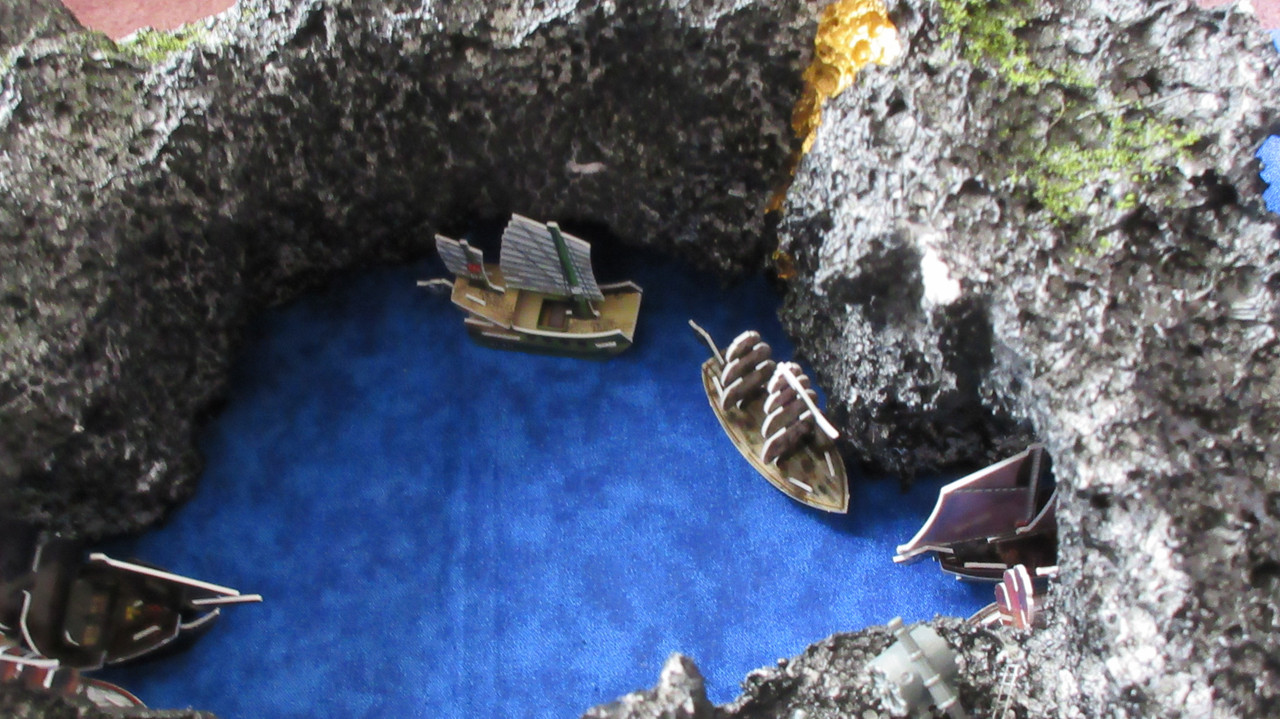 With 507 points in their fleet at the last point count, and 393 gold spent here, the Pirates have now become a 900+ point fleet! Their efforts will soon allow them to exceed 1,000 points. O_O The megalaunch also means that the Sea of Allost alone has over 2,000 points’ worth of stuff on it! 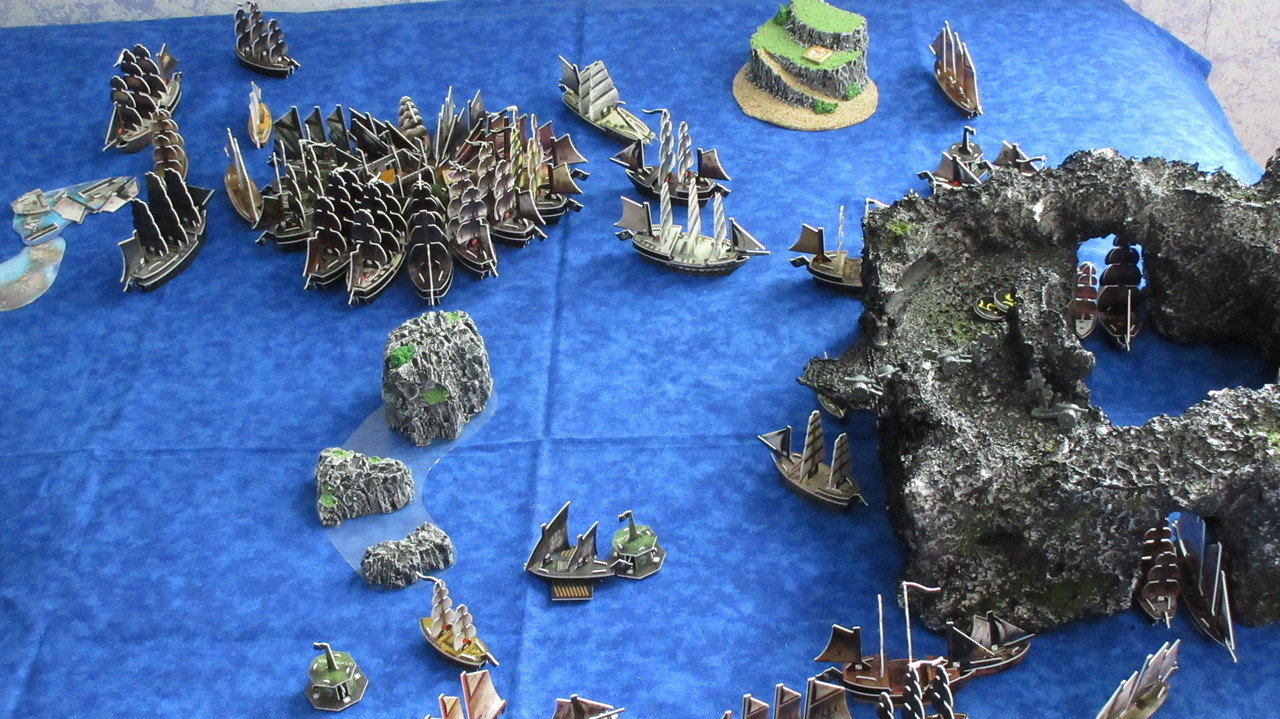 The Pirates do have plans to use their new ships, to say the least. Mission is now very content with his home waters, and plans to send at least a squadron (if not a large one) after the Americans, especially since the Pirates can travel from their southern whirlpool (though not the northern one close to the fort) to both whirlpools in the Sea of Karkuda. In addition, Mission plans to sail west soon, towards unknown and foggy waters…. 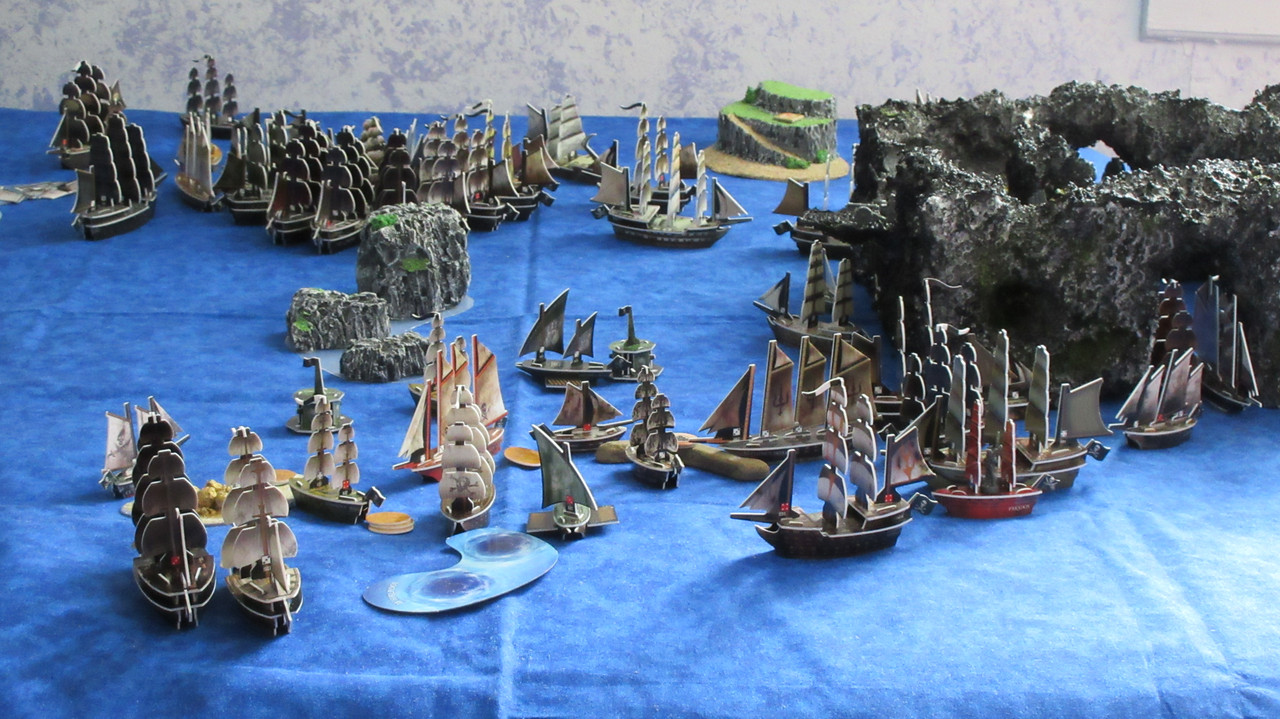 Back to the dominant war of the game! The Jade Rebels have a decent turn, taking off the flag on the Death’s Anchor and nearly dismasting the Spilled Salt (both courtesy of the Naegling). The fire aboard the Sea Lion spread, dooming the ship. I can’t say I’m unhappy about that, since the ship has been so ineffective and lame the entire game lol. 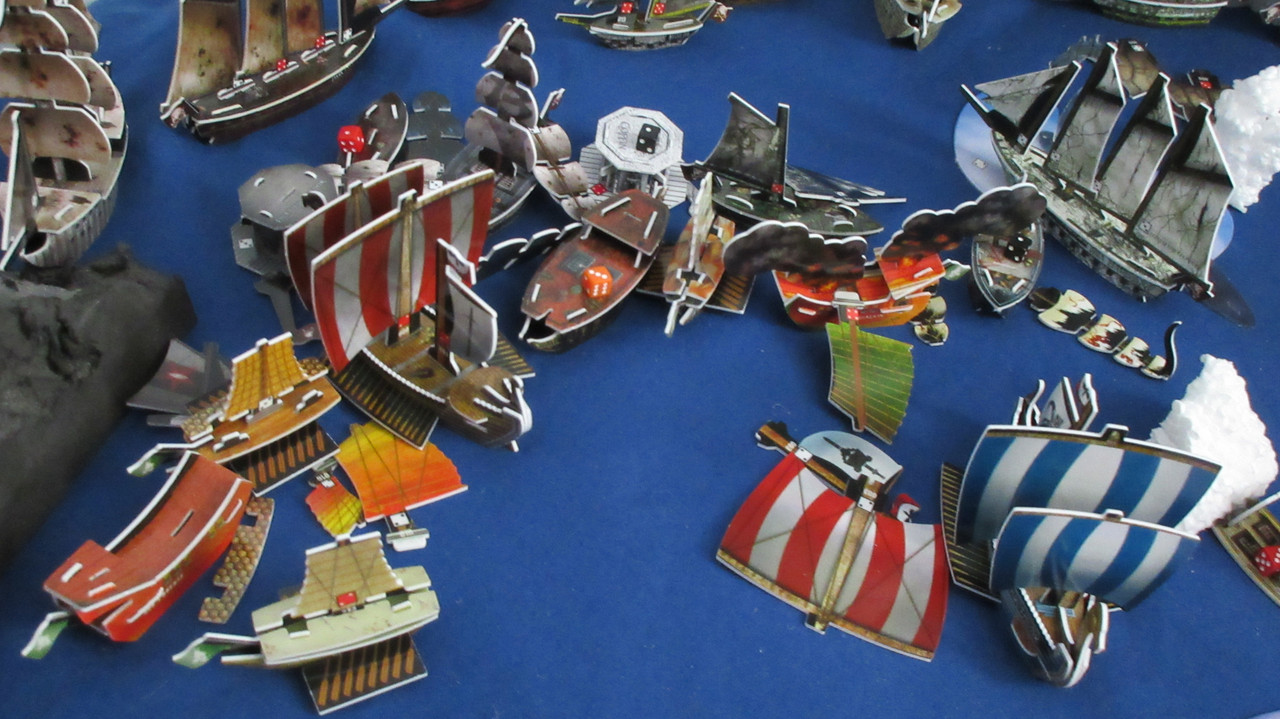 The Hrothgar does damage to the Jikininki and an icewreck, while the Grendel hits the Hellfire twice in a row to set the Cursed vessel aflame! 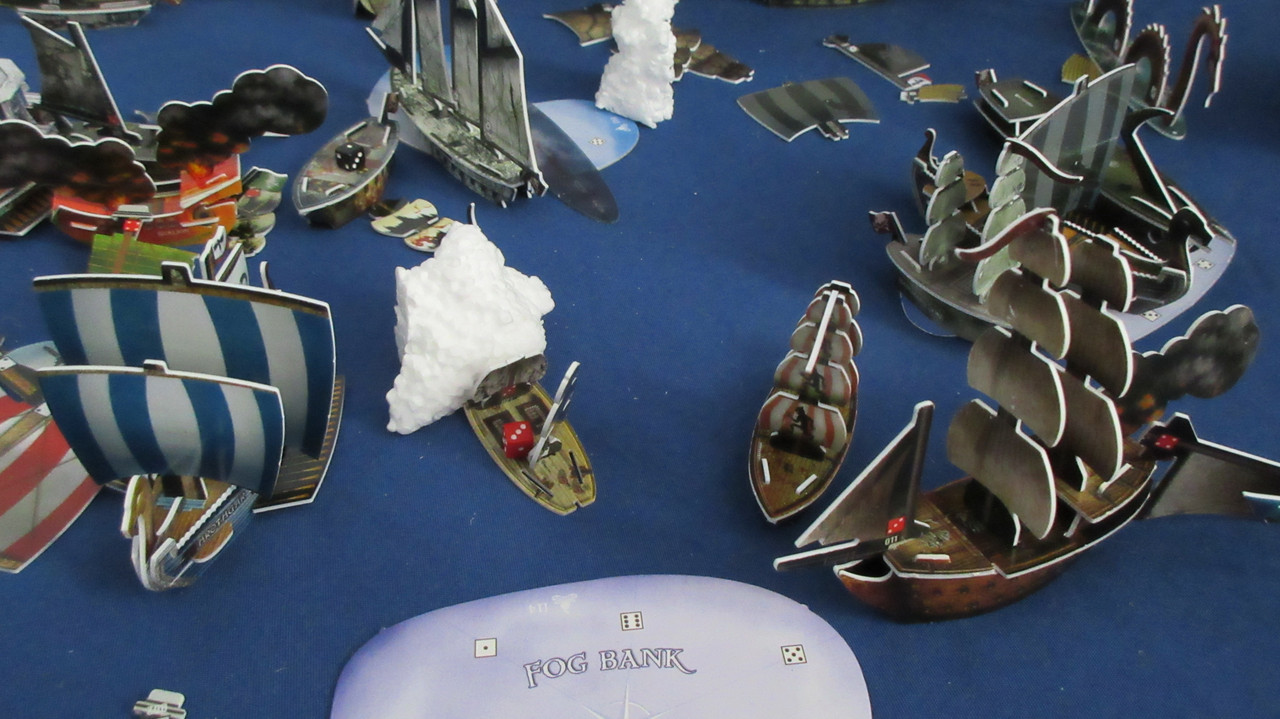 The Grand Path dismasted the Abomination and nearly killed Squalo. In the foreground you can see 3 newly repaired Jade ships returning to the war effort – the Polaris, Grand Mountain, and Asgard are back in action! 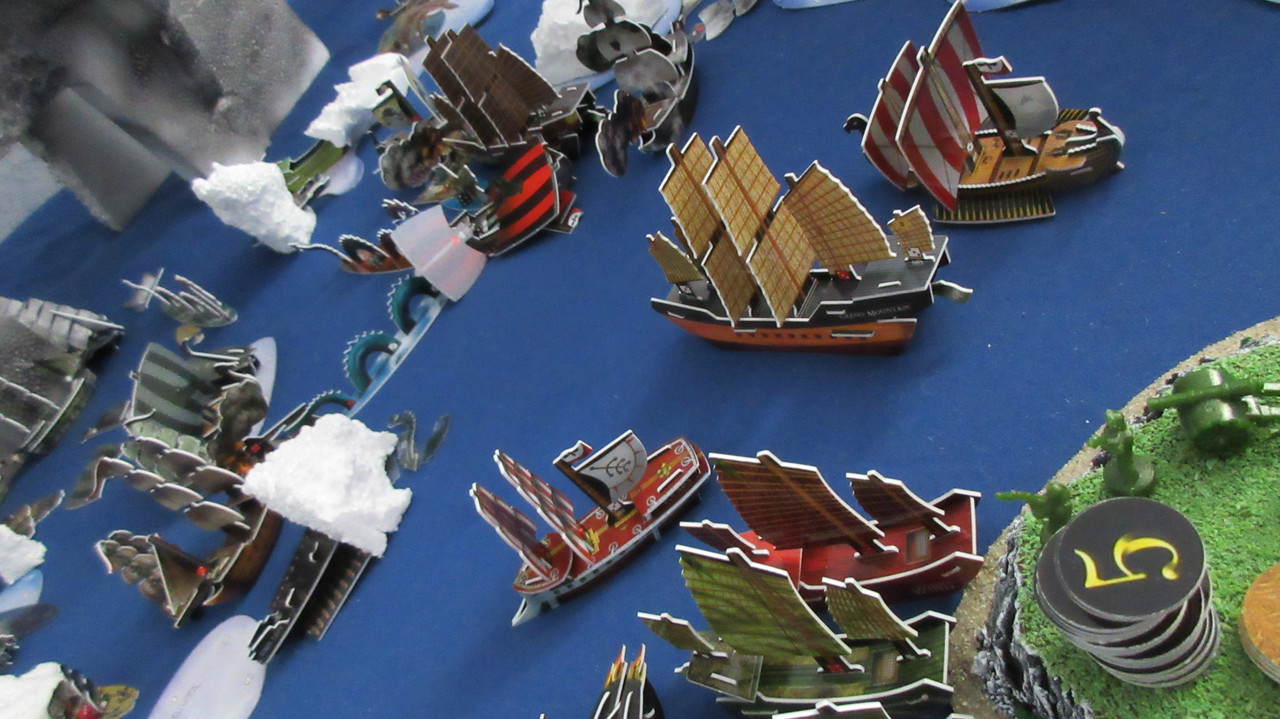 The Jades are also piling up the spices, with 56 of them in addition to what’s on their HI, but that resource has been the least valuable in the entire game, never being in the top half of values.

The Cursed take a turn, though they don’t have many ships on the western front with which to defend their cargo ships. The main development here is the Monkey’s Paw, who has returned to battle after another extensive repair effort. Her firepower combined with both flotillas to eliminate two masts from the Naegling, a ship the Jades really don’t want to lose and will therefore retire from the battle on their next turn. At the upper right, the Madness and Spilled Salt sail home for repairs, while the Fallen Angel slowly tows the Death’s Anchor away from the battle. 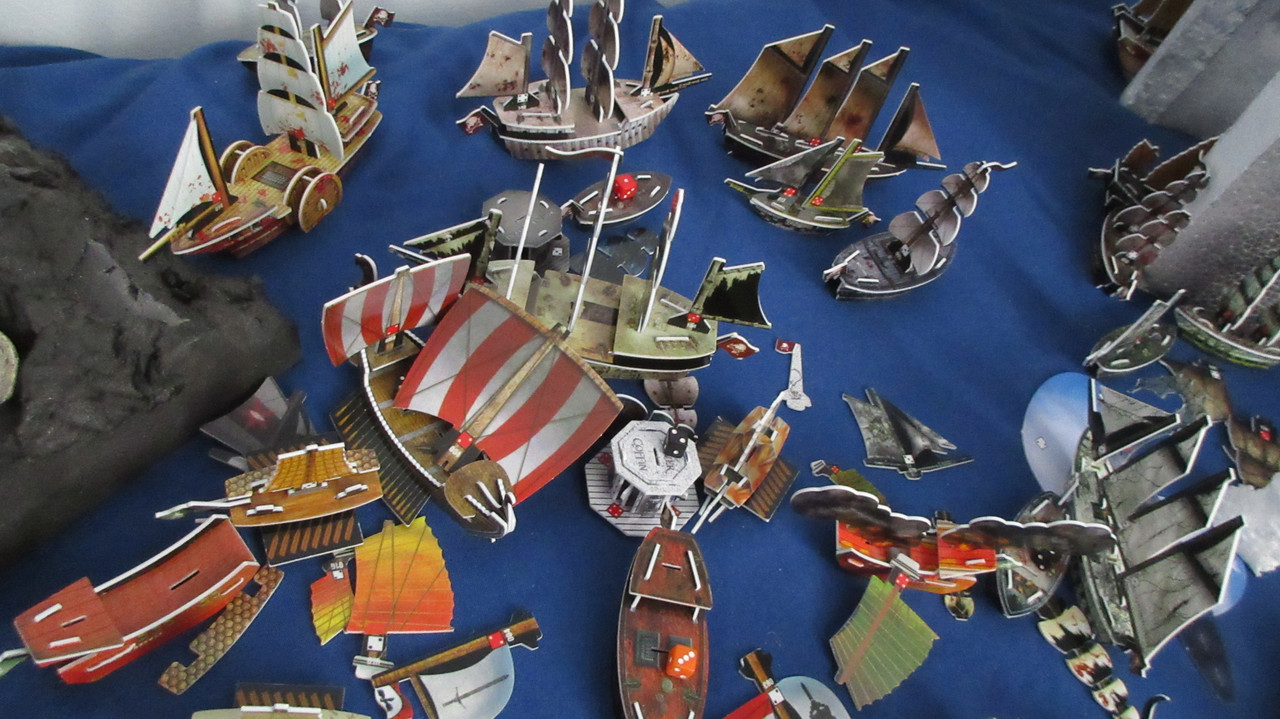 In a nice reversal of fortune from the failure-filled Turn 48, the Hellfire puts out her fire and combines with the Banshee’s Wail to eliminate a mast from the Grendel! 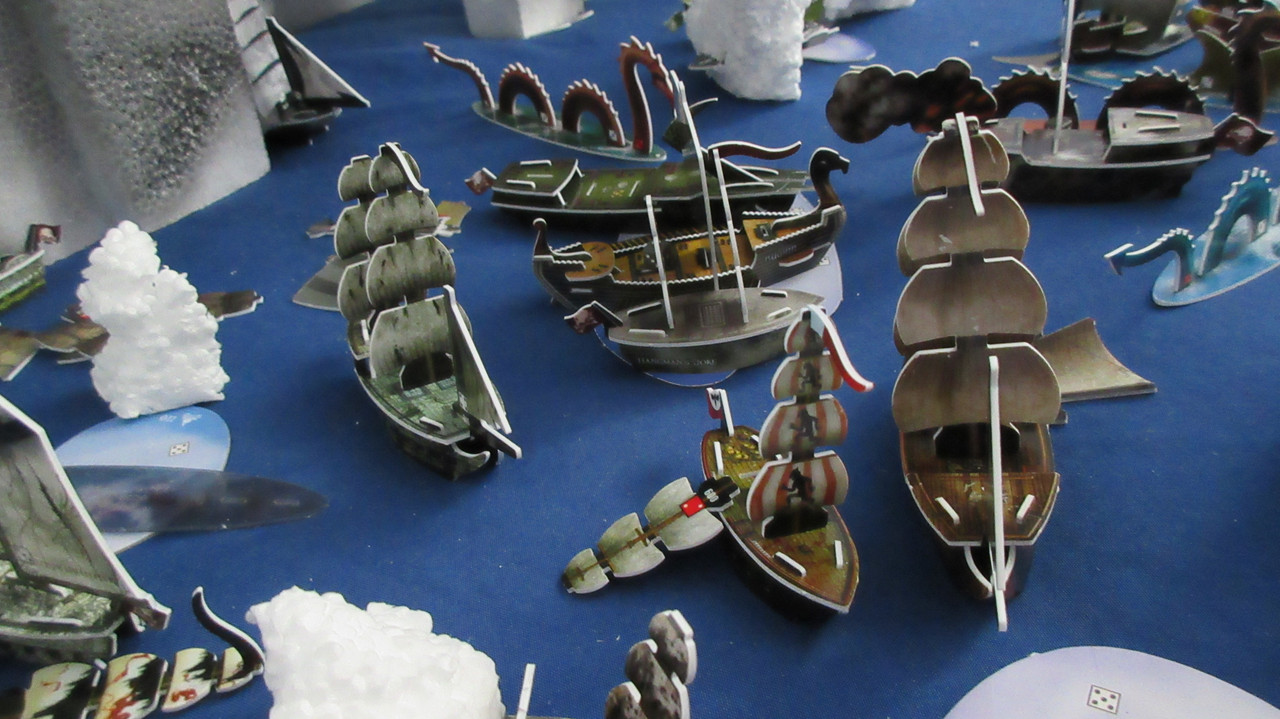 The Cursed sea monsters were very effective once again, and the Muninn is sunk! However, after being dismasted by the Grand Path, the Abomination succumbed to the flames and sank as well. This meant that each side of the battle had lost a large gunship on the turn, which is pretty damaging considering the house rules around mast elimination and sinkings. The Abomination left a hole which was conveniently filled by the Serpent’s Fang, who shot effectively to damage the Grand Path (missing with her firepot specialist however). At the left, the Nightmare has put out one of her fire masts and turned ghostly in order to sprint home for repairs if she can make it back in time. 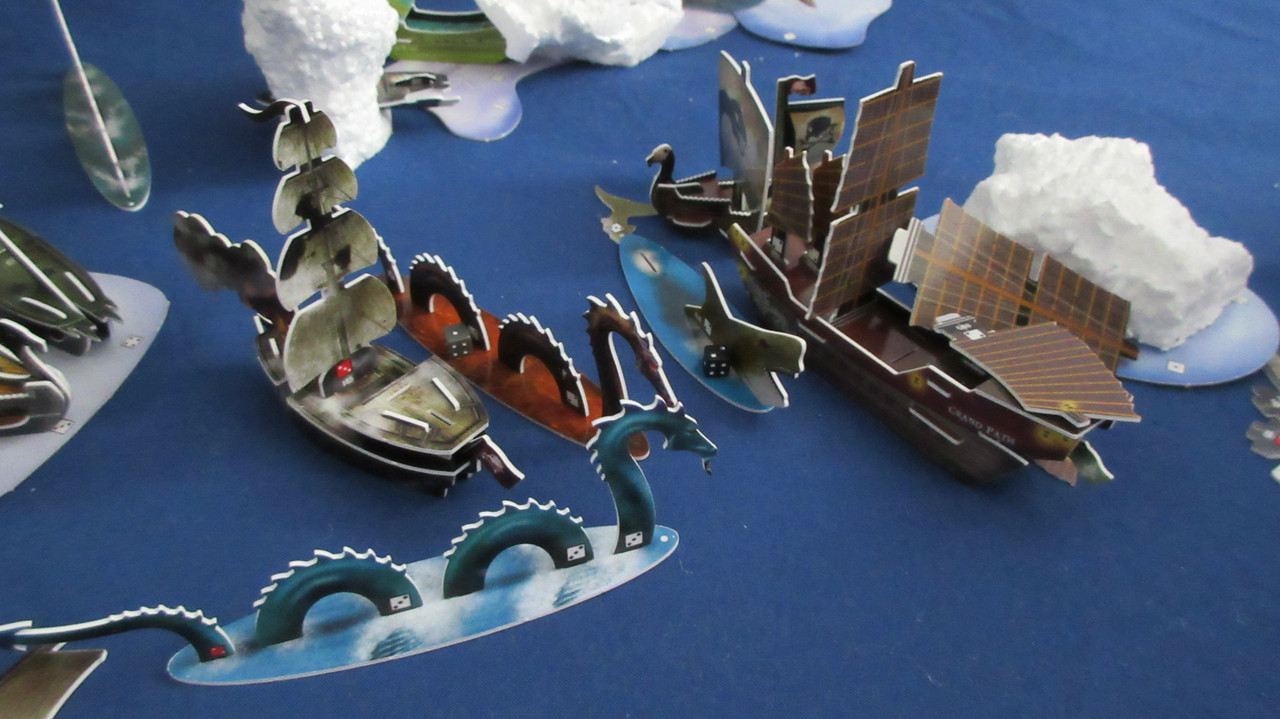 That is all for now, as operations in Allost took about 2 hours today lol. I hope to finish this rather grand turn tomorrow, when the Spanish will definitely cash in metals and get new ships! I expect the English and Americans to launch as well, so it’s possible that the game would become the biggest game EVER by the end of tomorrow! (I’m not planning a point count, but since it surpassed 3,000 points the other day and saw about 400 points of Pirate stuff introduced today, plus the launchings tomorrow during the second half of the turn, it may theoretically exceed the 3,516 of CG1!)