The second part of Turn 49 was finished today, with activities in the Caribbean and Karkuda providing little excitement but much in the way of long-term operations.

With no Spanish ships docked at or right near the home island, the English have struck directly! HMS King John opened her gunports and hit twice in a row to destroy the lone Spanish artillery unit stationed there. HMS Guy Fawkes didn’t have a target but sailed west as well. 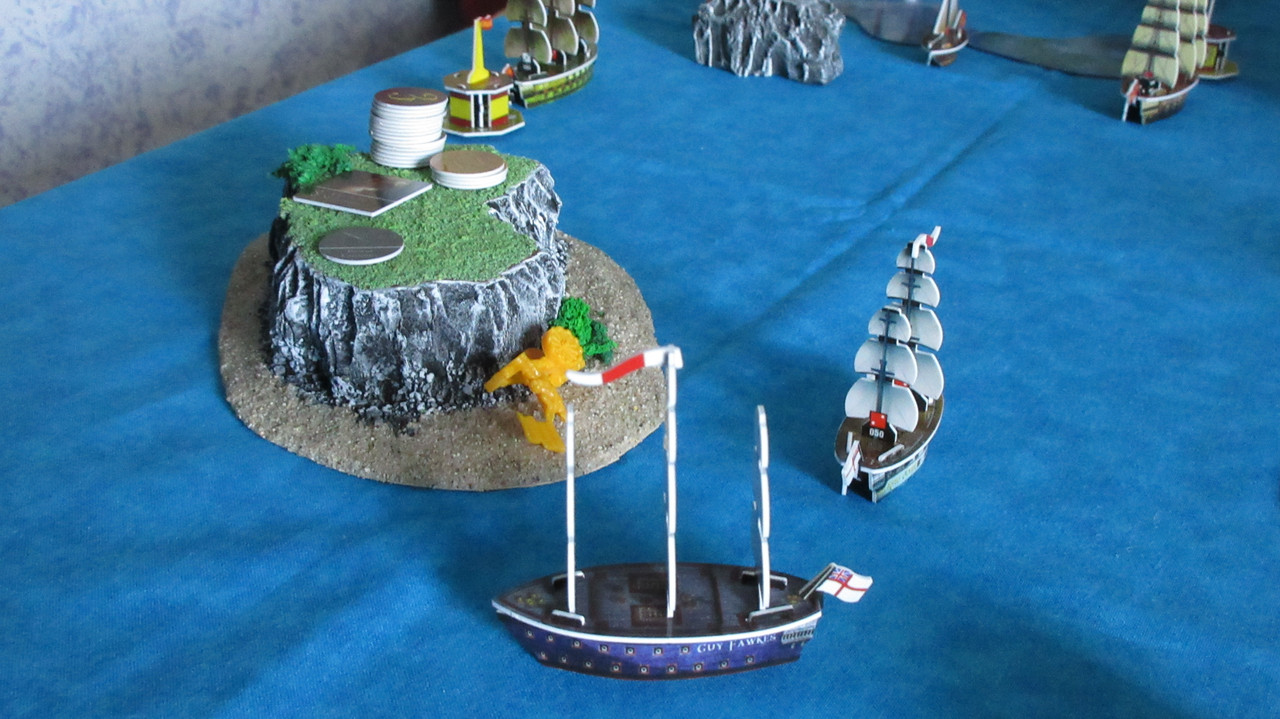 The English whirlpool squadron was ready to take the plunge! All 4 ships went through the whirlpool, hoping to discover new areas. Incredibly, just as they did before, the Metal Dragon and Bath both rolled 3’s to reemerge from the same whirlpool, albeit with damage! The Resolution rolled a 6 so nothing happened to her, which leaves only the Westminster… 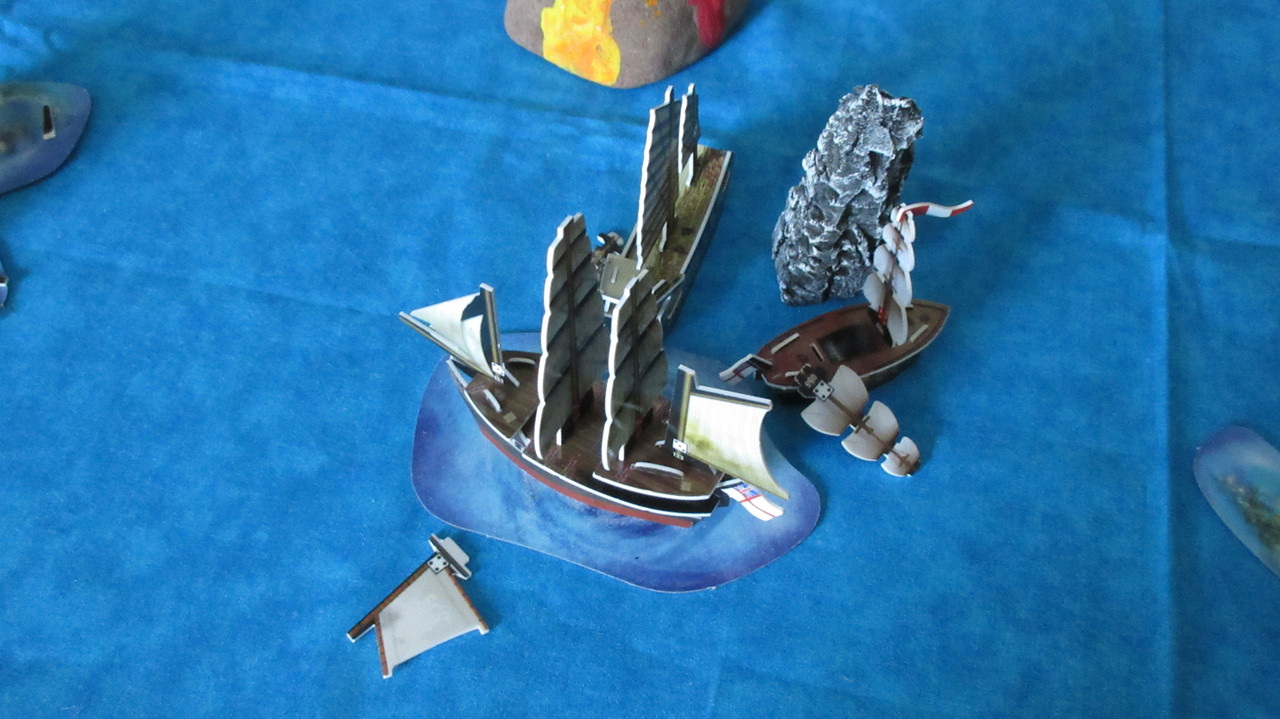 … who rolled a 1 to come out of the southern whirlpool in the Sea of Allost! The directional heading of 5 left her right next to Pirate warships of that faction’s whirlpool squadron! Havana Black spun around at the helm of the Deliverance, and his eyes narrowed at the sight of a Royal Navy vessel…. 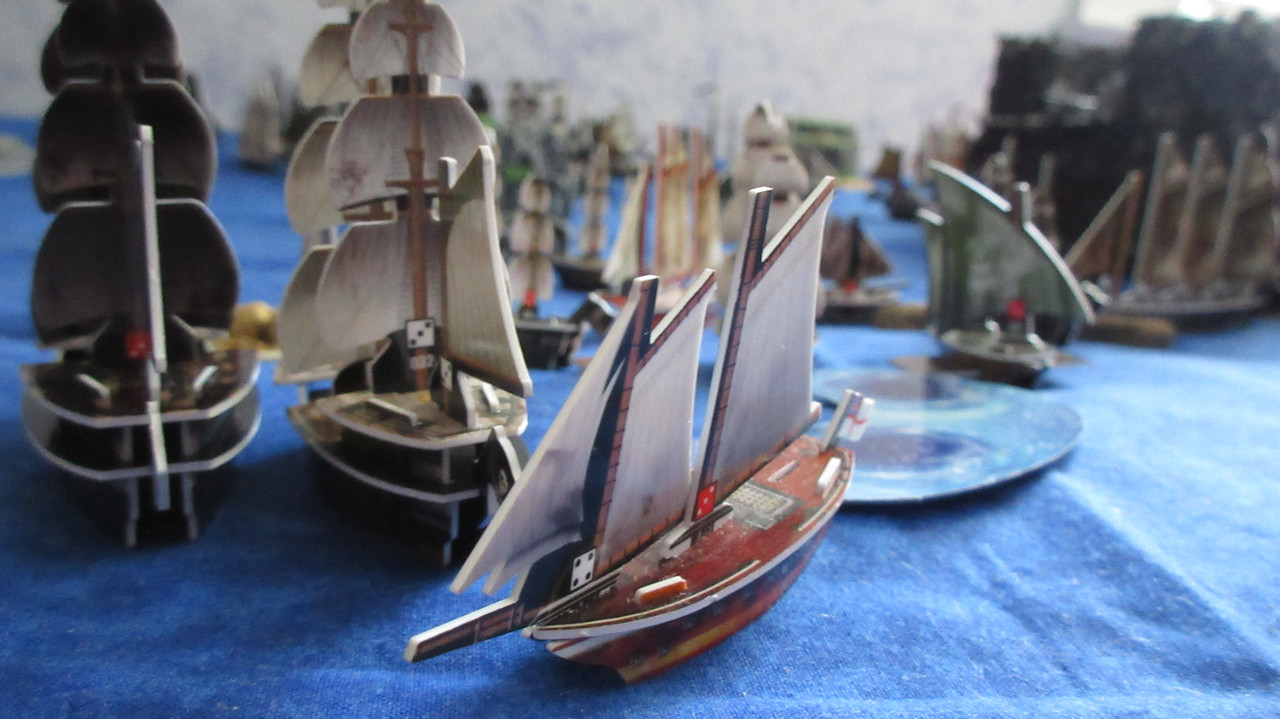 The English cash in 11 textiles for 55 gold and combine it with the 20 gold they had saved on their HI, spending 75 gold at the end of their turn. In the foreground, the Caradoc carries CRGO, the first of two English AA crew. At the right you can see three new English warships: HMS Lord Kettering, HMS Resistance, and HMS Granville. The English plan to augment their battle squadron sailing off of Paradise Island with even more ships. The tension has already been rising for several turns now, so a strike seems imminent and inevitable! 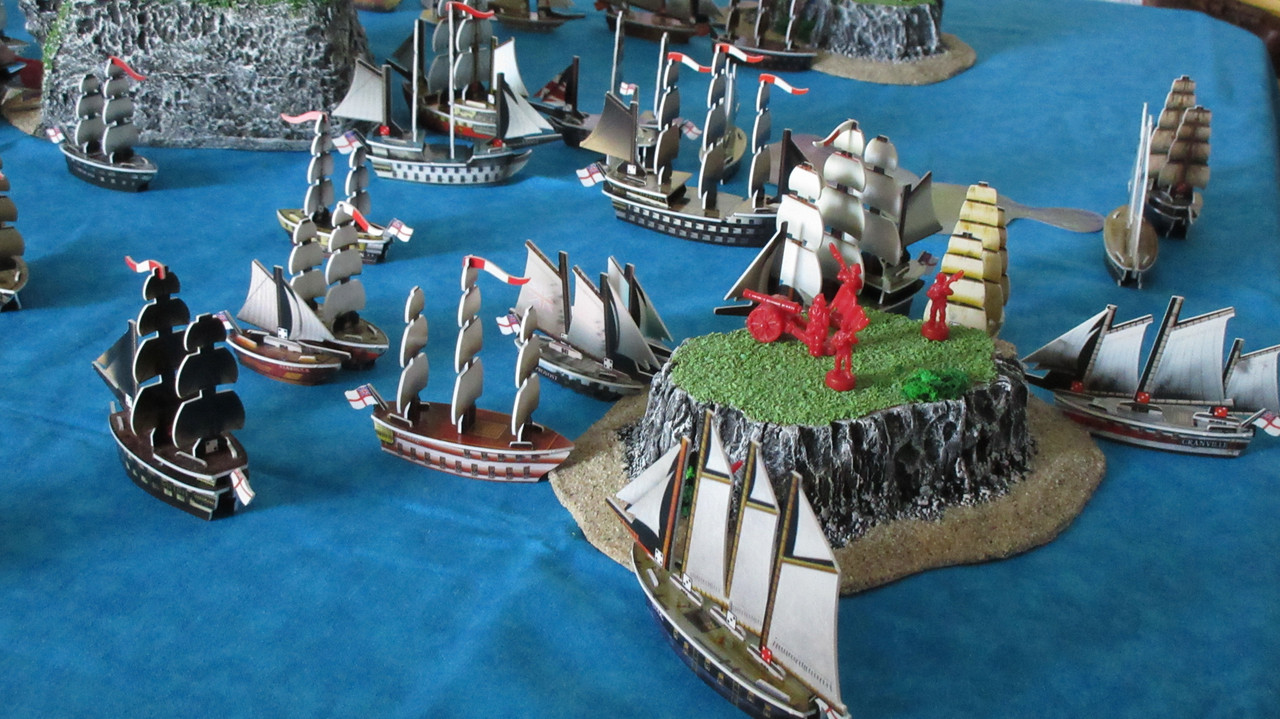 However, with metals luckily worth 6 gold apiece once again, the Spanish do a considerable launch of their own! They spend 101 gold on 5 ships. From right to left: the Cristal del Obispo, Voz de Dios, Granada, Corazon del Mar, and Reconquistador. Not only do those 5 ships just about double the fighting capacity of the Spanish Navy, they also give them a presence at their HI to deter the English from starting to cut off gold runners before they can reach home. Most of the ships are crewed and equipped to the max, but note that the Cristal only has a captain, helmsman, and oarsman aboard, in order to leave 3 spaces open. The Spanish plan to use her as a super durable hybrid since their resource/cargo system could still use some work. (they have been forced to buy for war due to the English) 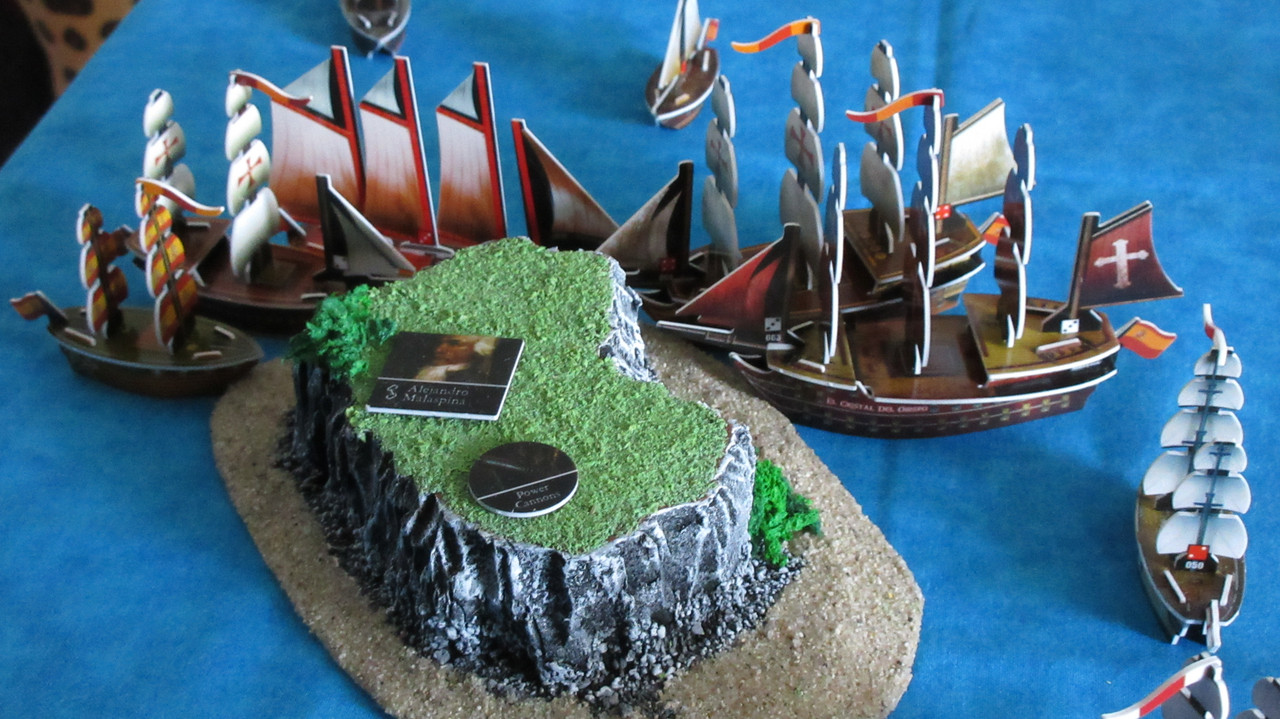 Back in the Sea of Karkuda, the French have a small logjam at their Harbor but things are progressing smoothly for them. At the bottom left, the Dijon has army units aboard which are en route to The Flat. 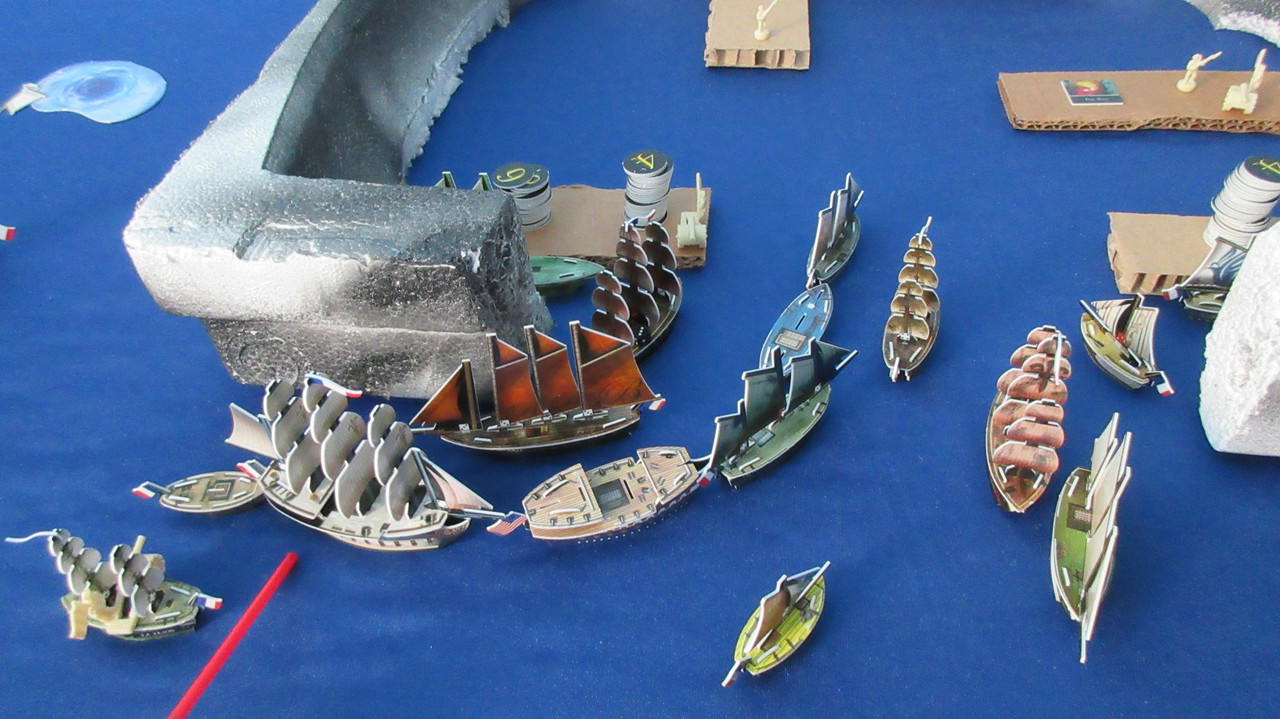 Nemo goes rogue! Tasked with defending the island just east of the French Harbor (visible in the background at the upper right), Nemo has become extremely bored with his orders! He anticipated being in the thick of the fight, not defending a boring island in some far-flung corner of the sea. In addition, he doesn’t see his vision lining up with French plans. He has changed the course of his Nautilus to point southwest, and speeds away from French waters. Who knows what he’s up to?? 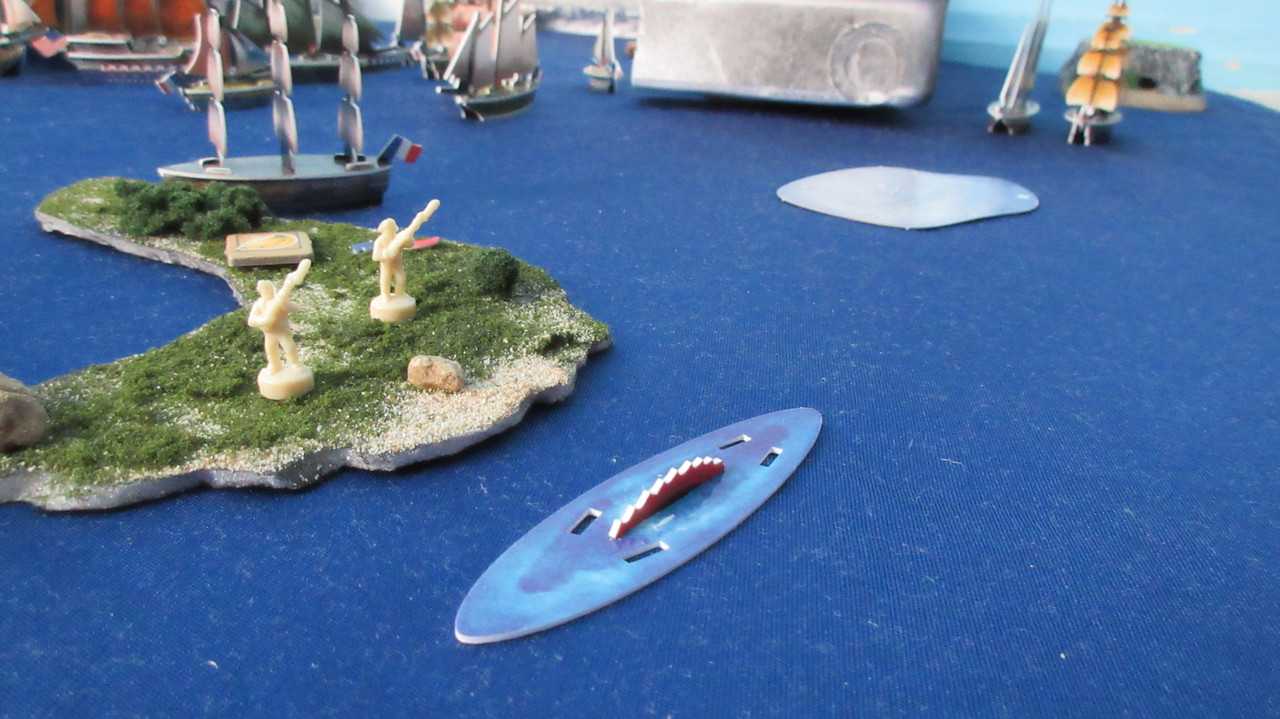 Preble goes through the American whirlpool again, but instead of being spun out of it, he ends up in the Caribbean! Yet another instance where the Americans just cannot seem to roll a 4 to guarantee passage from their whirlpool to the other one in Karkuda. He arrives next to the English whirlpool squadron, who are similarly confused and disoriented. XD 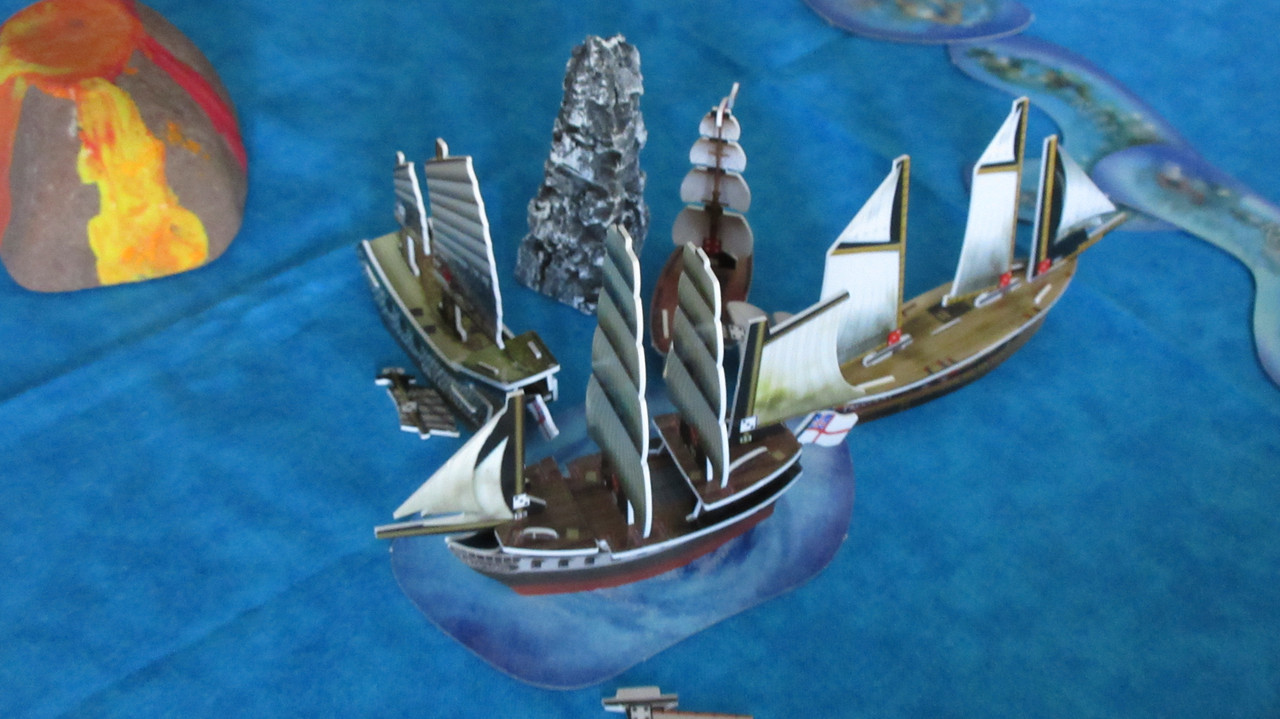 Whoa! The southwest beach of the big island has suddenly stopped producing food, which was found readily there the whole game so far! However, luckily for the Americans and their canoes, textiles are discovered instead! 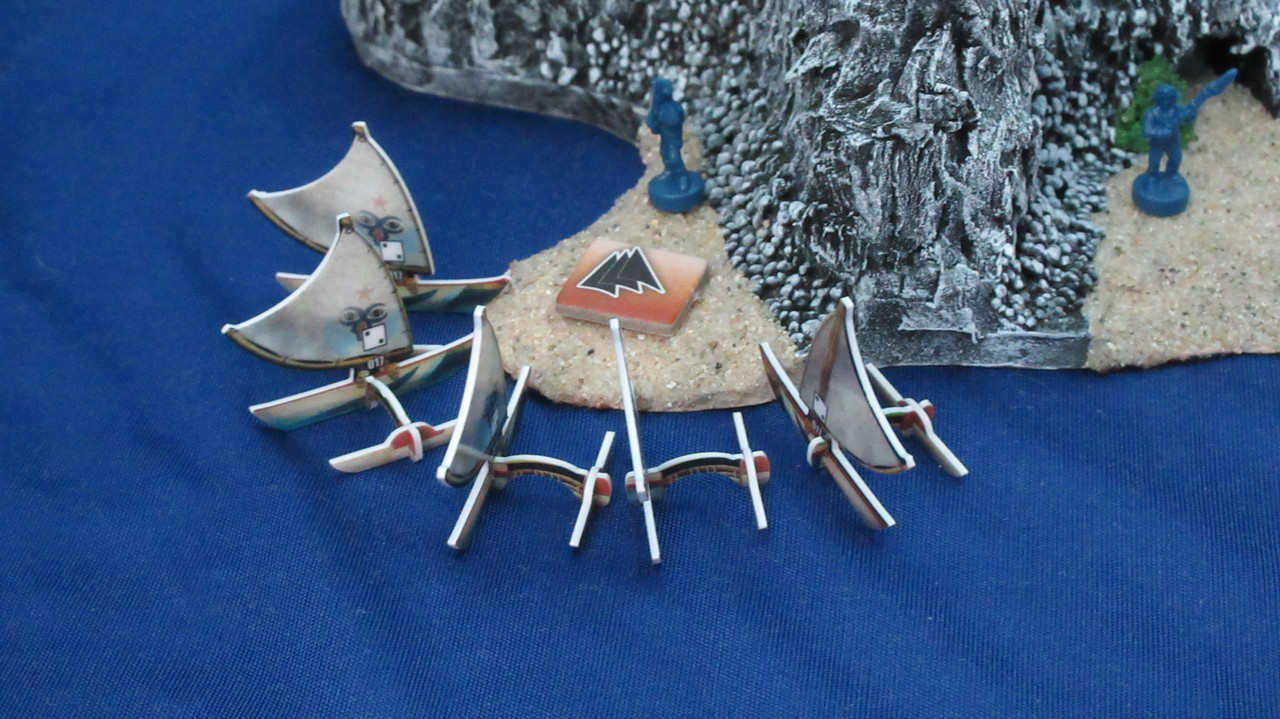 Continuing a big turn of big spending, the Americans cash in 16 metals and add 36 gold to the mix to spend 132 gold on a bunch of stuff! They have a very diversified launch, which I’ll explain over the course of these last 3 pictures. First off, Ralph David finally has another ship! With a reasonably large windfall, the Americans could afford a proper ship for the Pirate hunter. What better ship than the OE Constitution, which gets +1 to her cannon rolls against Pirate ships! A firepot specialist and oarsman join the standard crew aboard the new vessel, and Ralph David is ready to go hunting again! 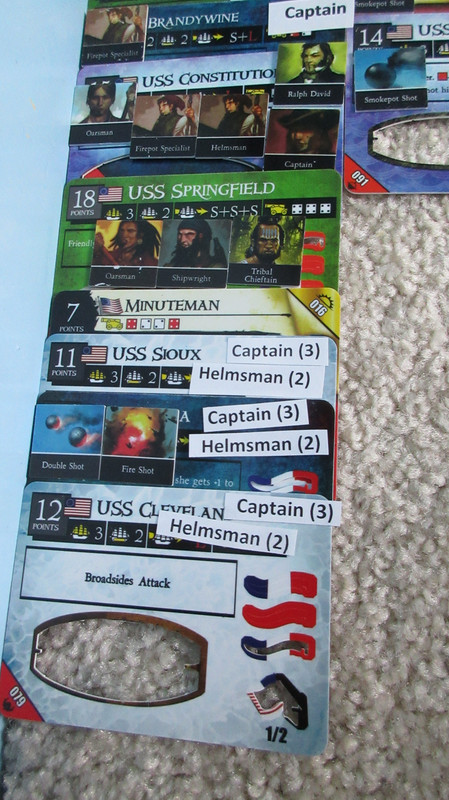 American operations around their home island. Along with Ralph David getting a new ship, the Bonhomme Richard and Paladin are now fully repaired, giving RD a proper squadron! Of course, the Americans aren’t yet aware of the Pirate megalaunch, in which case David would certainly want to wait for the Georgetown and Gold Eagle to repair as well. Notice the new set of canoes at Ruby Island. 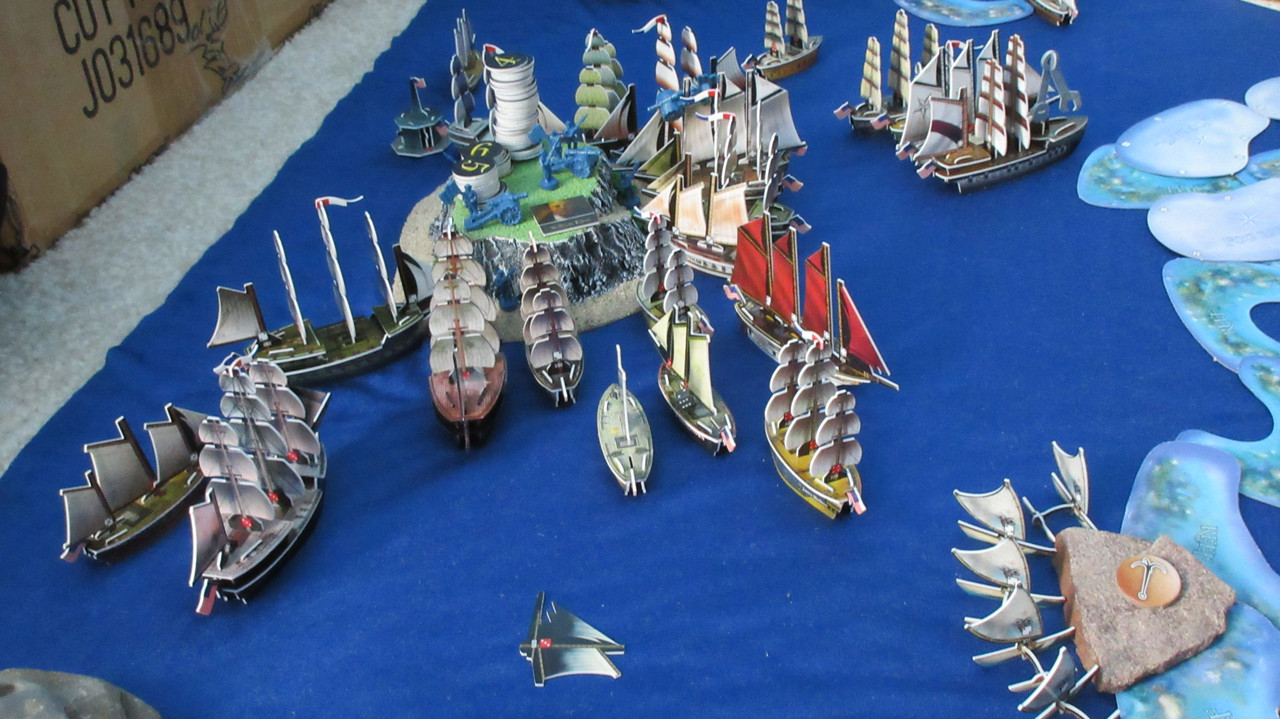 The Brandywine was launched for her ability to ignore terrain, as the Americans plan to send her east of Ruby Island and into new territory. The Sioux, Cleveland, and Saratoga were all purchased to further reinforce the squadron that Preble eventually anticipates taking The Flat with. At the top of the frame, the Springfield was launched to carry the tribal chieftain for the new canoes, and also to serve as a cheerleader ship in home waters. She currently tows the Minuteman flotilla, the first one launched by the Americans! The Springfield is certainly a very odd ship, with an extremely high point cost and base move for a 3 master (along with low cargo), but these games allow her to shine a bit more than usual. They certainly aren’t new ships, but the Providence and Louisiana have loaded some army units to be taken to the lumber island west of The Flat. The Americans are preparing for potential war with France, and want to defend their border as best they can if the French strike first. (which you can tell is unlikely from what little French gunships there are, but keep in mind that even the Americans aren’t aware of the Harbor itself yet…) 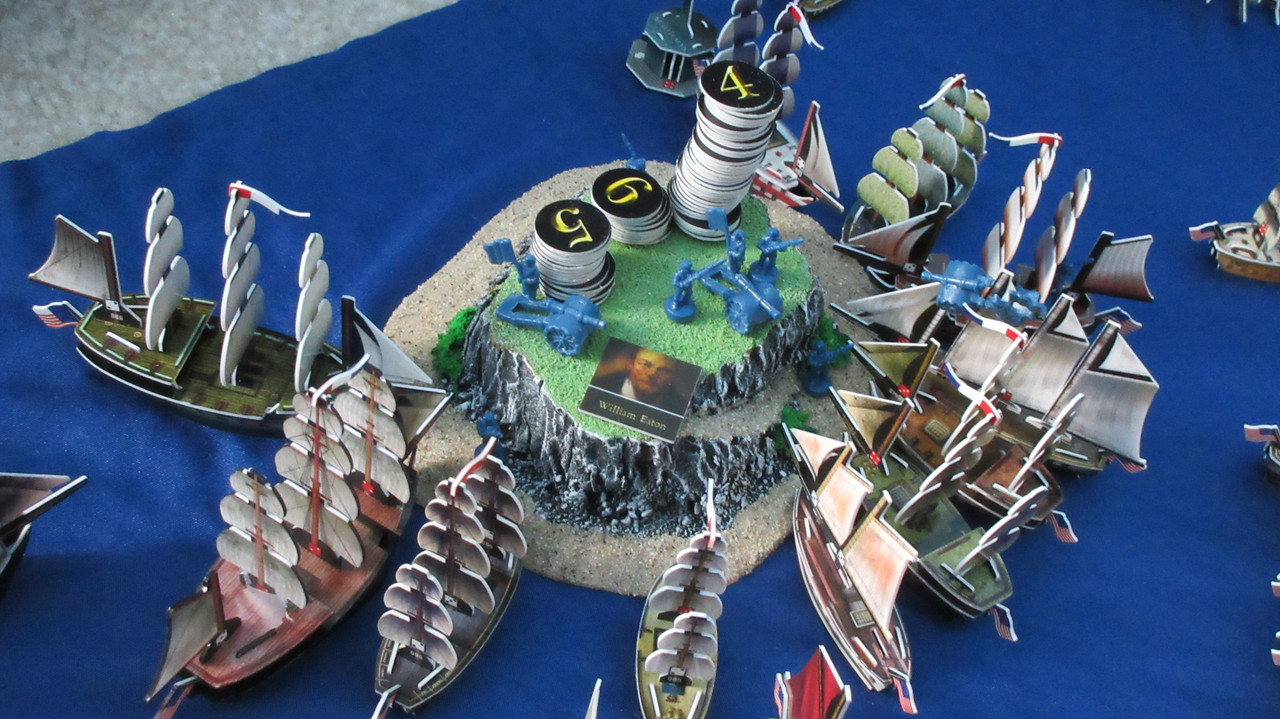 A few notes to flesh out this shorter report.

-I have begun running out of not just actual crew and equipment chips, but even the little paper ones that I originally made for new players that have the main generic crew (captains, helmsmen, explorers, oarsmen) on them. To solve this problem I am planning to write things on the back of the ones I’m not using, which are mostly just the explorers. I will most likely abbreviate, so if you see things like that in a deckplate picture, my general plan is FPS=firepot specialist, FS=fire shot, GS=grape shot, SPS=stinkpot specialist, etc etc.

With that, the heat wave is nearly over!! Between that and my vastly increased availability on Wednesday-Saturday (in this case Thursday-Saturday since today was still very hot), things are about to REV UP in this game!!

I am hoping to play quite a bunch the next three days, although with the game likely surpassing 3,500 total points with today’s launches, one turn per day may still be quite a lengthy affair haha. Many exciting developments are likely just around the corner, as well as some new discoveries even after about 50 turns have passed! (and since I am excited about breaking the record from CG1, I may do another point count as early as Saturday)