The Georgetown comes under attack from the Feathered Hat and Deliverance! However, the Pirates roll an abysmal 1/5. 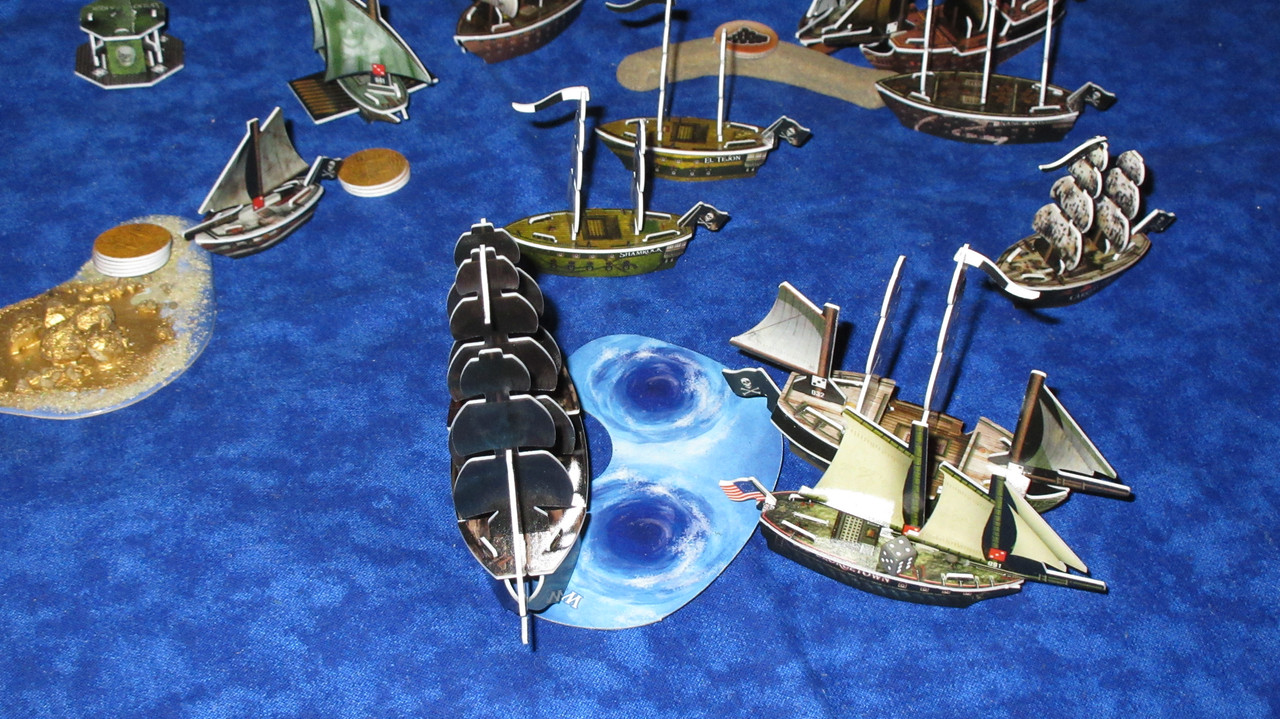 The Grand Path veers off from her conflict with the Nightmare to target that ship and the Abomination simultaneously. Of course, the only miss was a 1 for exploding shot, which took off her mizzenmast (after it hit the Nightmare however). The Muninn hit 3/6 against the sea monsters pinning her. 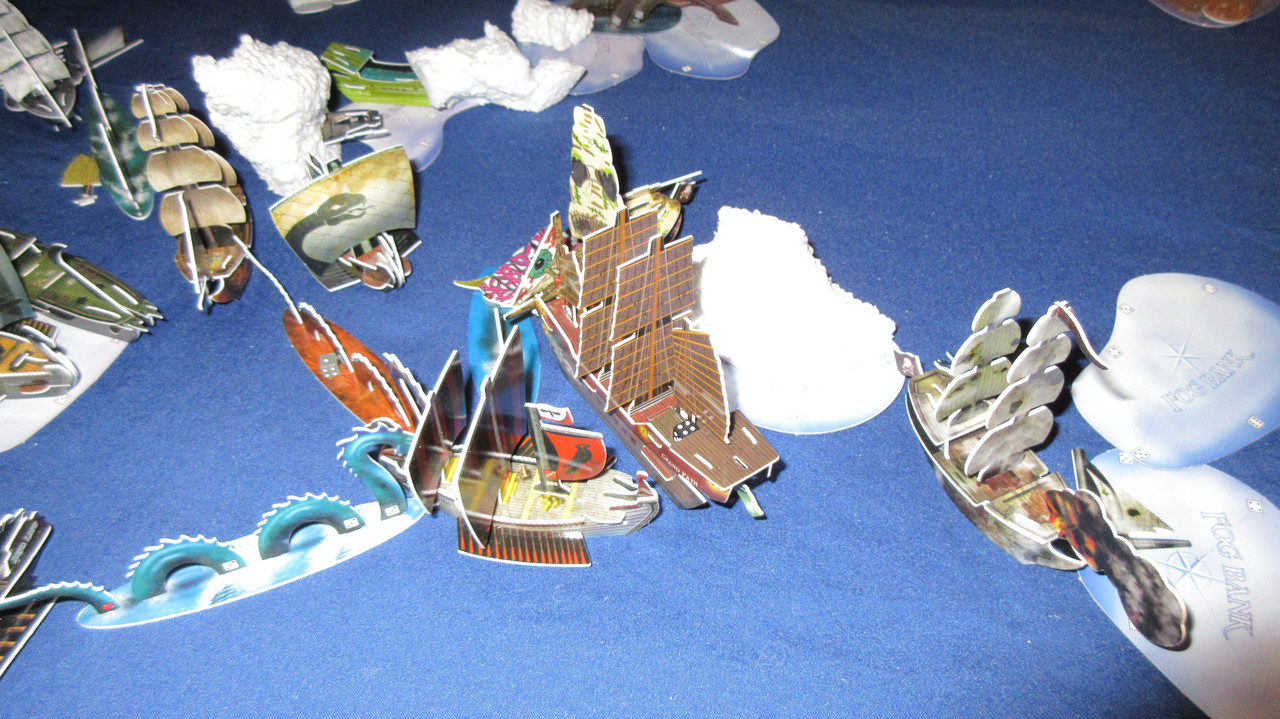 In a masterstroke of tactical strategy, the Huginn took off for a fog bank with the Pestilence in tow, after the scuttle roll for the prize was unsuccessful. The Pestilence was then released from the towing once the ships were inside the fog, meaning the Pestilence is doomed, forever sitting in the fog bank! XD Although, perhaps the Cursed can manage a way to pull her out somehow…. At the left, the Grendel has taken a risk and gone all-out against the Needle, but fails miserably. She hit once in two shots but lost the S-board despite getting +1 to boarding rolls against the Cursed (lol, just further demonstrating how overrated +1 to boards is). 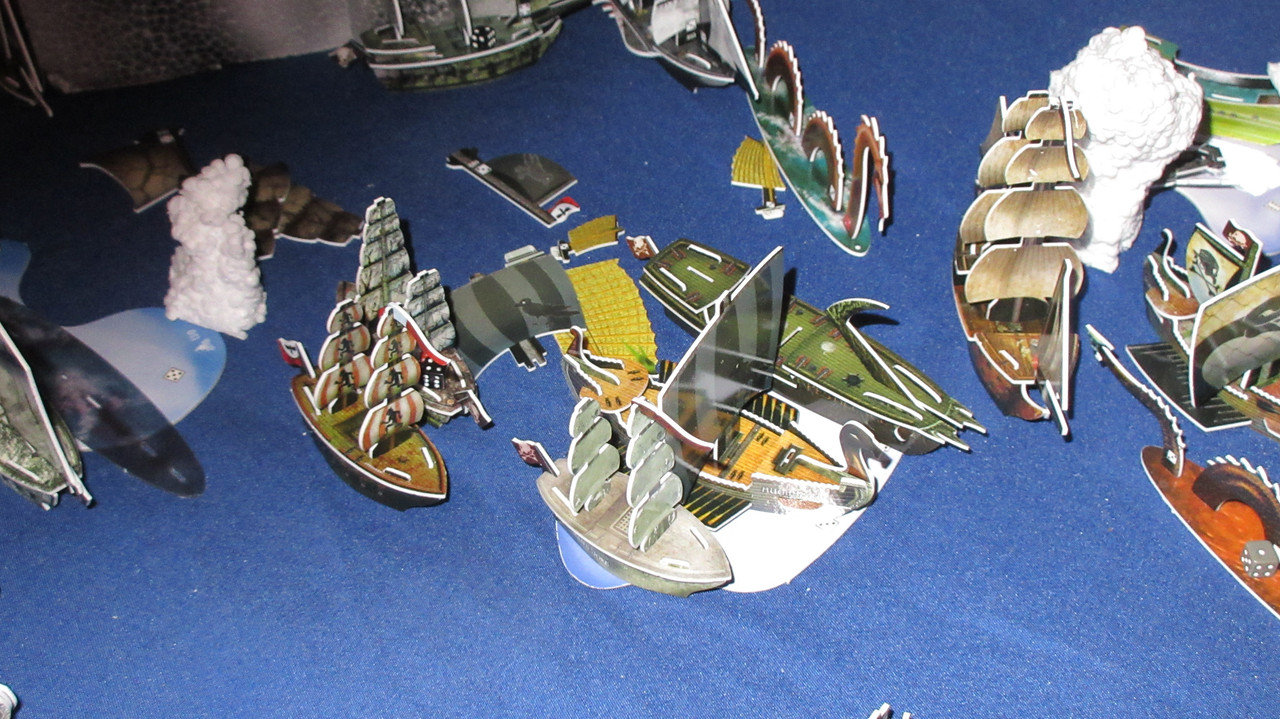 More “epic failures”! Well, sort of. The Hrunting let the Naegling take her place in the battle line, with the Naegling dismasting the Lilu and nearly sinking the Silver Coffin if she hadn’t rolled a 1 on one of the shots. The Sea Lion continues to be the least effective ship in the entire war, as I would now estimate her shooting record to be about 1/10. Her guns are rank-4, but I usually hit with those about as often as rank-3 lol. However, the Hrothgar hits 3/4 to dismast the Jikininki, taking the Cursed pest out of action. 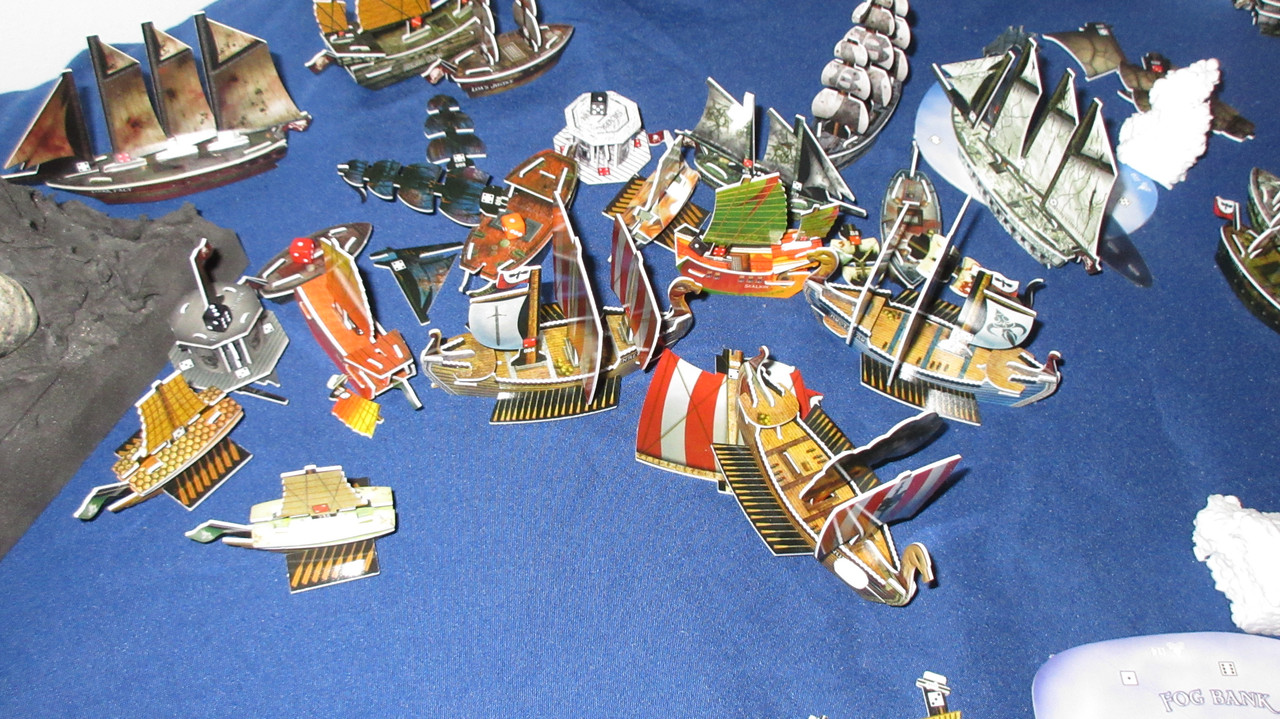 A bit of a strange sight: ships fail miserably while sea monsters are effective! The Nightmare and Abomination have been HORRIBLE for the Cursed, with the Nightmare’s fire spreading and missing both her shots against the Grand Path. Then, just like the Nightmare last report, the Abomination rolled a 1 on her fire shot to set herself aflame! Ugh, what a pathetic display in this war today. Although, the triple-headed sea monster threat managed to hit 7/8 to completely dismast the Muninn! 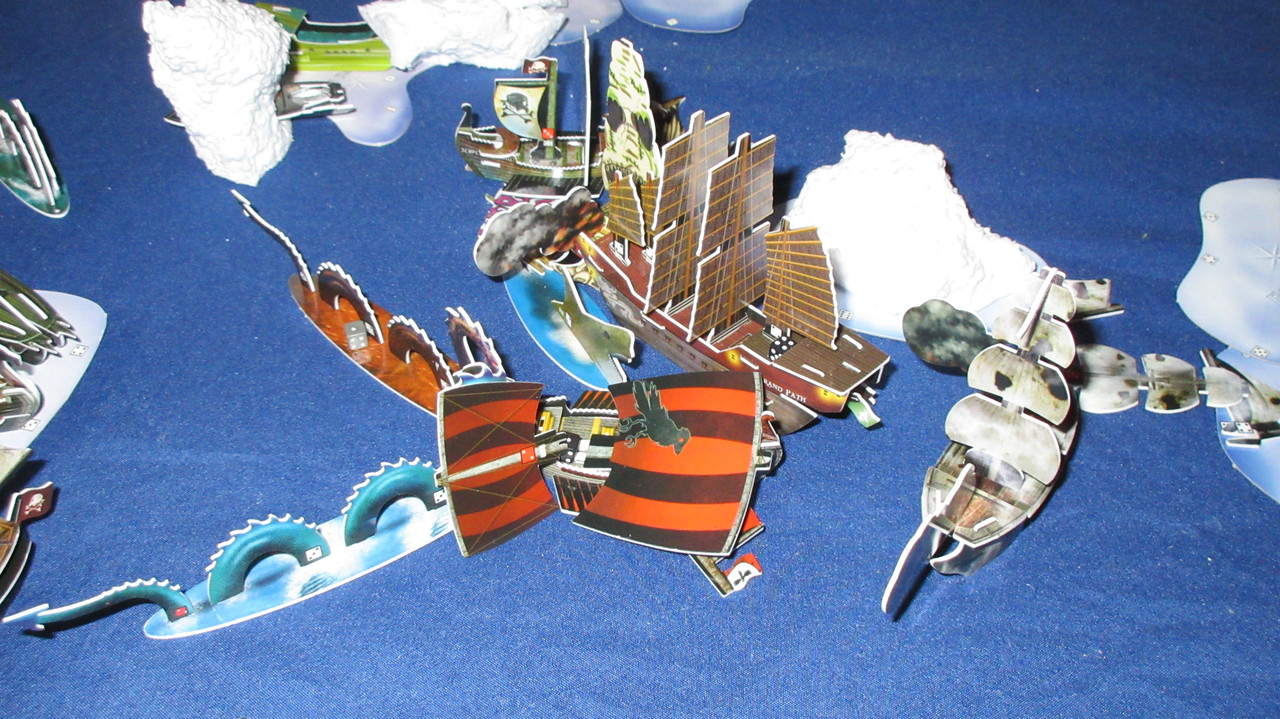 The Nightmare and Abomination have set themselves on fire and managed exactly one hit on the GP combined (the mast was eliminated via the backfiring exploding shot). The Muninn is a suddenly derelict ship floating amid her own wreckage.

The Fallen Angel tries to row the damaged Death’s Anchor flotilla out of harm’s way, but not before the DA damages the Glorious Treasure and Sea Phoenix. The Cursed were absolutely inept today. The Lilu was derelict and couldn’t tow the Silver Coffin into a better position. As a result, the SC’s only target was the Proud Tortoise, but that ship is immune to L-range guns. XD The Madness did manage a firepot specialist hit on the Sea Lion, the latter of which I wouldn’t mind seeing at the bottom of the ocean lol. The derelict Jikininki prevents the Spilled Salt from attacking the Hrothgar, so the Salt turns away and heads southwest instead. At the far right, I have ruled that icebergs and icewrecks can only damage a ship with one hit out of the two required to eliminate a mast, rather than mast elimination outright (which still happens when equipment backfires). The icewrecks have seemed too powerful to me. At the upper right, the Needle goes home to repair, not wanting any part of the Cursed-hating Grendel. The Monkey’s Paw is visible, fully repaired and ready to return to the war. 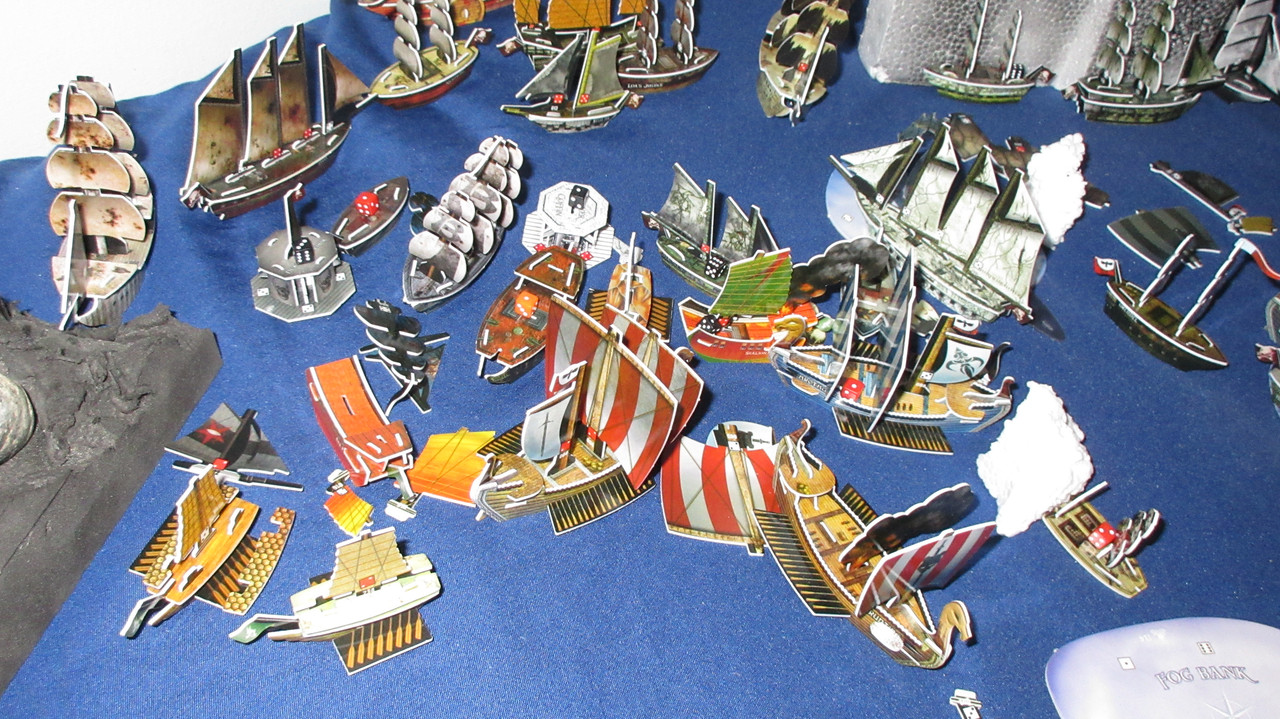 The Jades are already on the cusp of blasting away at Cursed trade, but the pathetic nature of both fleets’ efforts may prevent them from a decisive victory.

The English whirlpool squadron reaches the Caribbean whirlpool, where the captains of the Westminster and Gold Eagle exchange words. The Gold Eagle’s captain seems in a hurry and appears confused, leaving the captain of the Westminster to raise his eyebrows. The English wanted to make sure they could all enter the whirlpool on the same turn, and now with the Resolution caught up, they plan to take the plunge next turn! 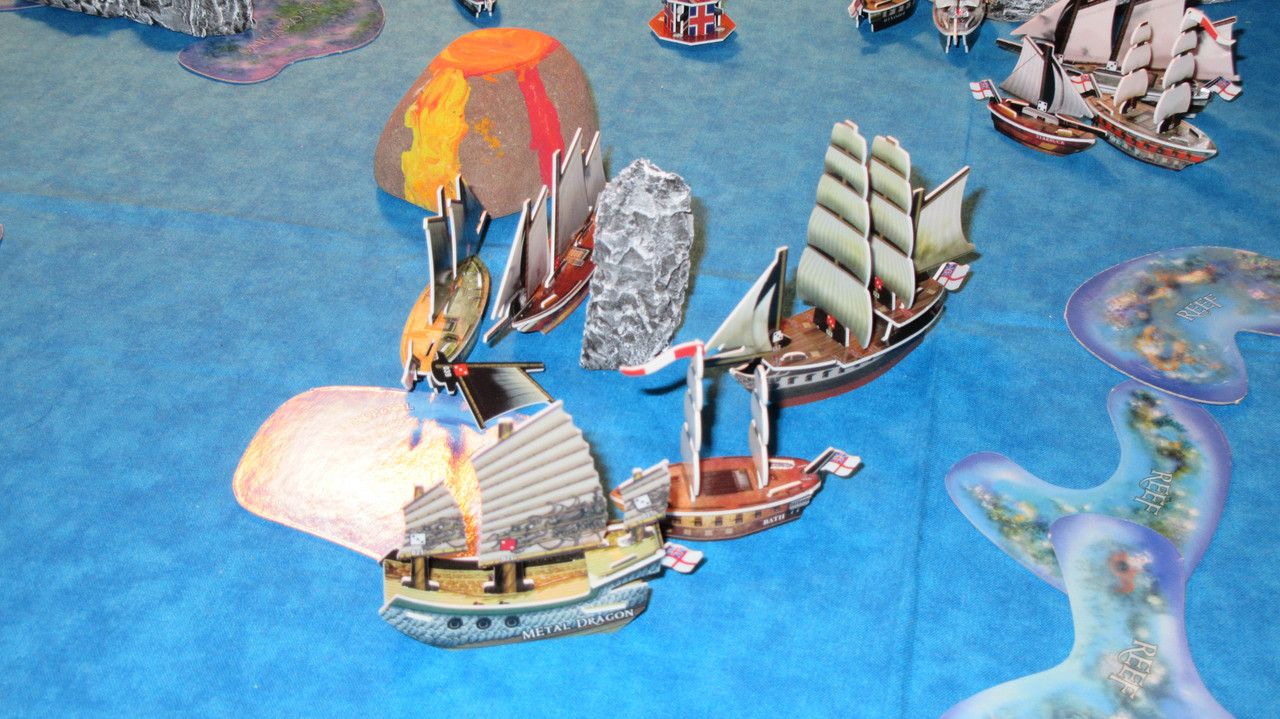 An array of American operations over their full turn. Preble does indeed brave the whirlpool himself! However, he gets a 5 (which would spin him out of the same whirlpool) and then a 6 with his reroll, a 6 meaning that the ship stays in the same place and doesn’t even get spun out of the same whirlpool (meaning it also doesn’t have to roll for damage). Having experienced the bizarre whirlpool shenanigans himself, Preble now understands the plight and confusion shown by his officers aboard other ships. He is still determined, but realizes he must be more patient. Word of the French captures reaches him, and he is understandably disappointed. The Gold Eagle returns from the Caribbean. The Georgetown returns from her harrying journey to the Sea of Allost. They will join the Paladin and Bonhomme Richard as whirlpool victims in need of repairs. At the far right, the Yankee rolled a 6 with exploding shot to destroy another reef! This nearly doubles the gap available to the Americans, and should really help them going forward in their quest to expand. At the home island, lumber and textiles are unloaded and cashed in! Preble shows how serious the Americans are, launching two of their best ships: the Frontier and Intrepid! 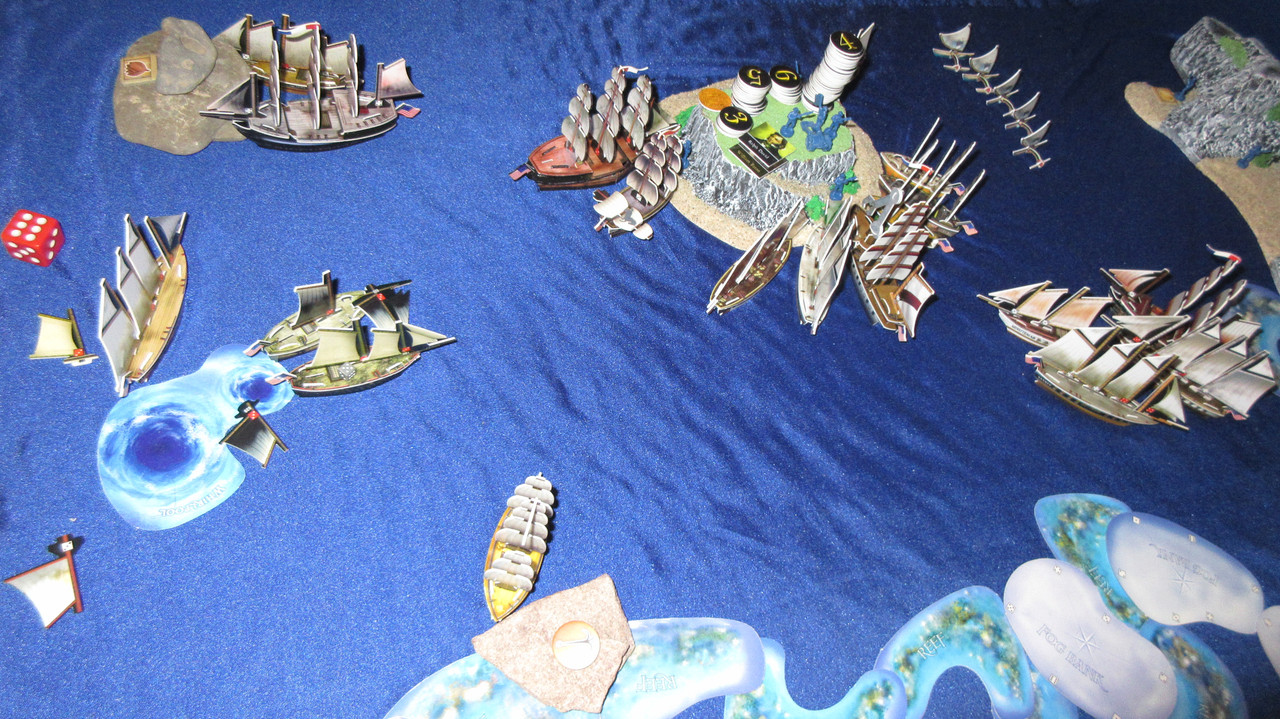 Turn 49 will see new resource rolls! Hopefully I won’t get a 3 and 5 again. Ugh. Anyway, there will probably be a lull in the game here since I can’t play many turns over the next few days. In the meantime, feel free to speculate.