Somehow, I was able to play two turns today!

Another quick house rule:
-Shipwrights can repair forts while stationed inside

The Pirates cash in newly unloaded metals for a whopping 128 gold, spending 96 of it on 5 new ships. The Lady’s Scorn (SCS version, with lots of shot equipment aboard) and Accused (with firepot specialist and musketeer in addition to captain/helmsman) are tasked with protecting Dead Man’s Point from the Americans, a duty that the Fool’s Hope and Recreant are already assigned to as well. However, the more ships the Pirates assign for protection, the more likely it is that they will use some of them in a more offensive capacity…. The Feathered Hat, Sunrise Fire, and Madagascar are part of a squadron that has been tasked with whirlpool exploration. They plan to enter the whirlpool south of Pistol Island, and they may be joined by other ships as well. As factions get more and more crowded HI areas, they are more likely to send ships farther from home to avoid logjams, which may result in more enterprising expeditions…. 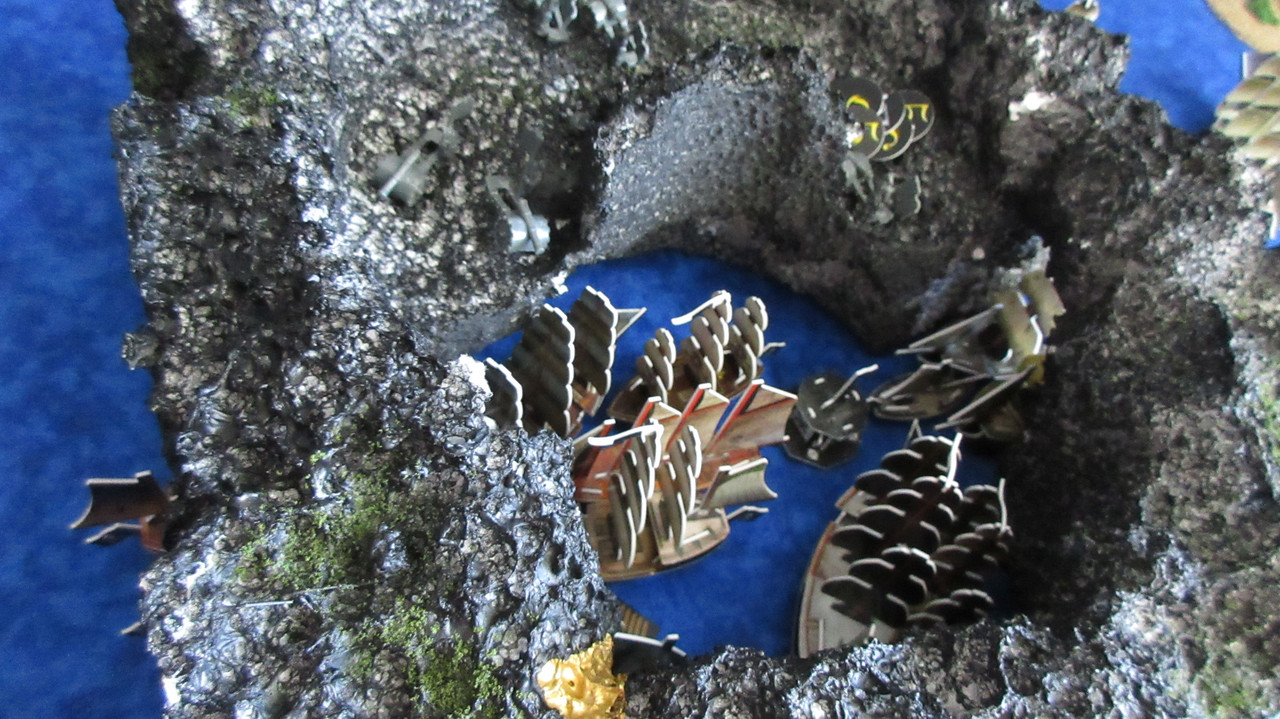 Combining the leftover new gold with their old gold, the Pirates also have 69 gold saved up. They are tentatively planning to purchase a fort upgrade for 100 gold, which would allow them to launch ships and crew from the fort using gold from their home island. However, even as they save up, I’m not 100% sure I will implement that rule (being able to launch stuff outside of your HI). The Pirates have been having major issues lately with their kingdom, since it’s extremely difficult to get in and out with so many ships coming and going. I think this weakness of the kingdom needs to have more sway than being able to bypass it by spending 100 gold for a fort upgrade. So, I may simply make the upgrades even more expensive, such as 200 or 250 gold lol. 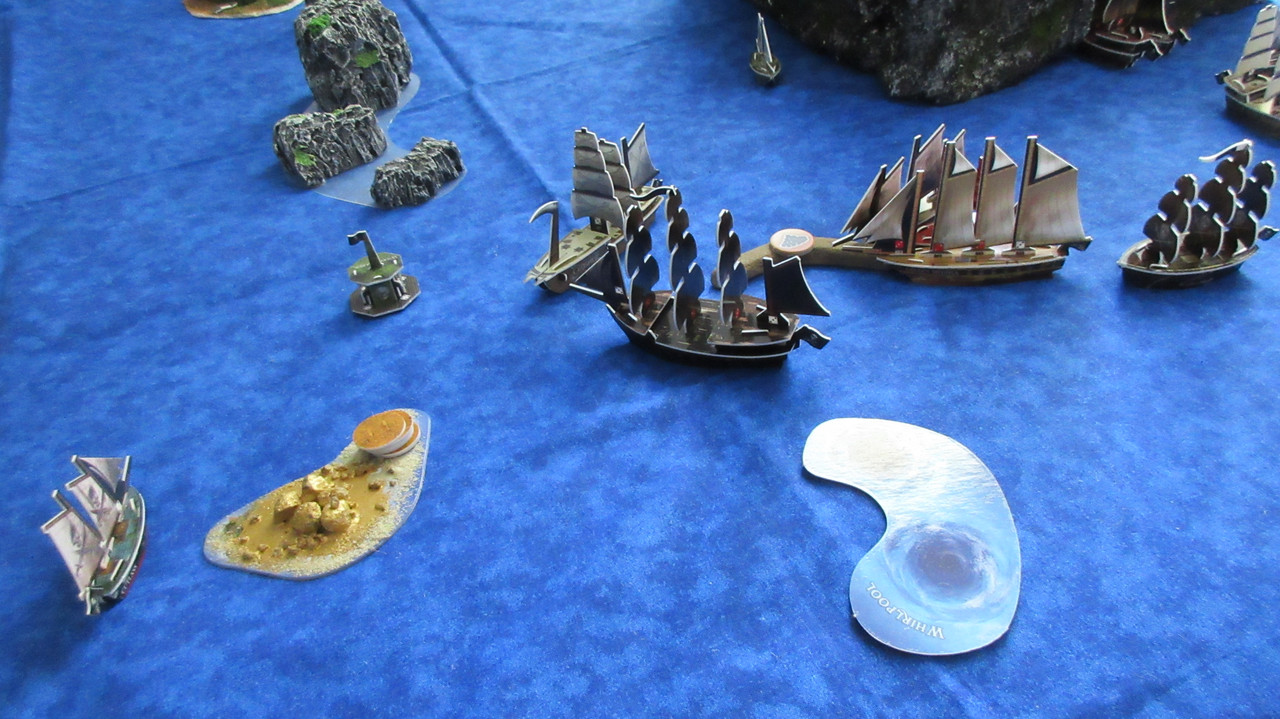 Warlord Cavendish gets his SAT, but is disappointed to not find more textiles on the island! The Jades manage to uncover some spices instead, but it’s a bit of a blow to a faction who has been incredibly fortunate with resource rolls so far. The Jades only have one wild island they’ve explored, but textiles have always been worth 4+ gold through all 30+ turns thus far. 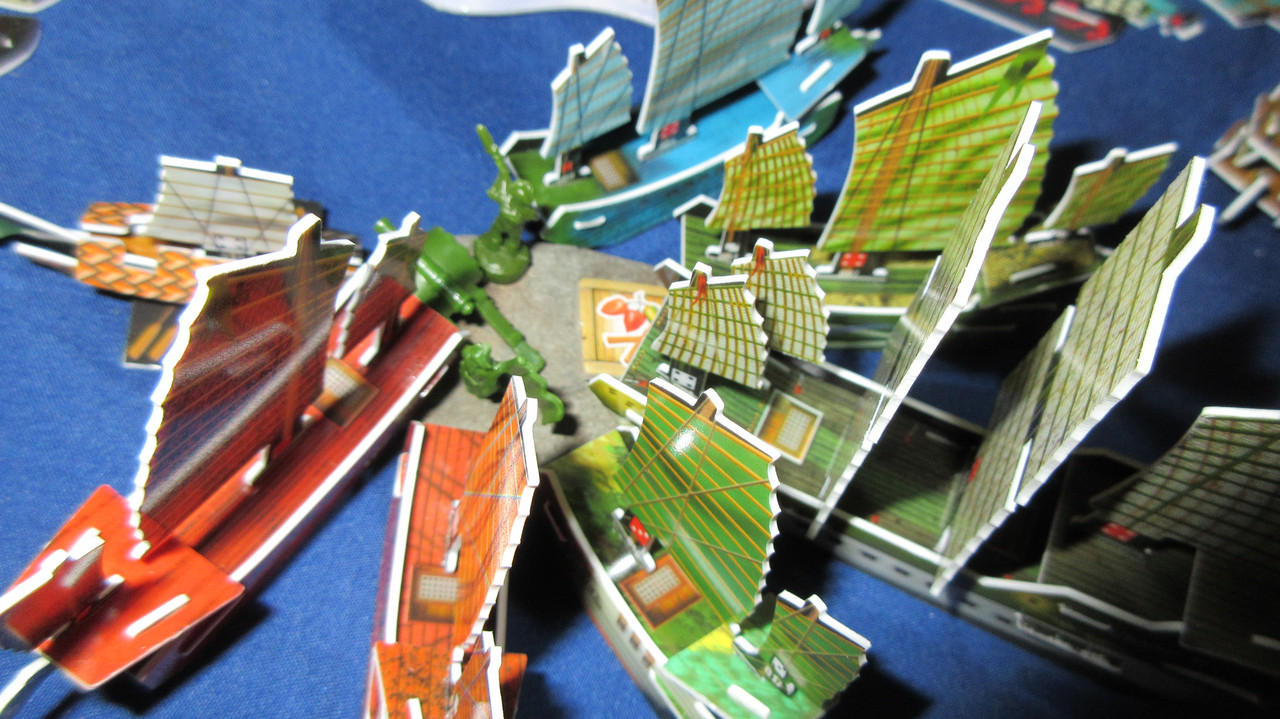 Back at the Jade HI, ships are busy repairing and others are coming in to dock for repairs. 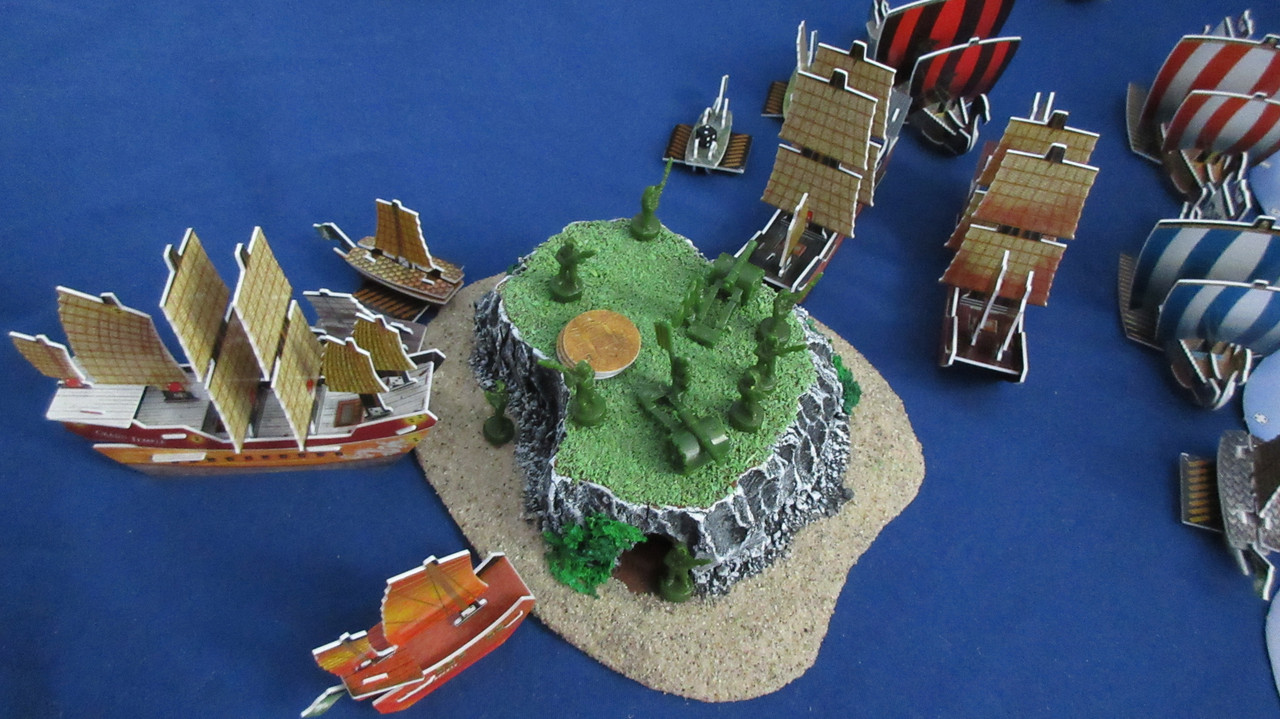 The English have done it! Using one of the strong cables transferred from the Starbuck, the English have hoisted an artillery cannon to the cave halfway up Diamond Rock! Now all that’s left is to attempt hoisting a cannon all the way up to the summit, but that will require a cable with a length of 2L, which the English still need to purchase. 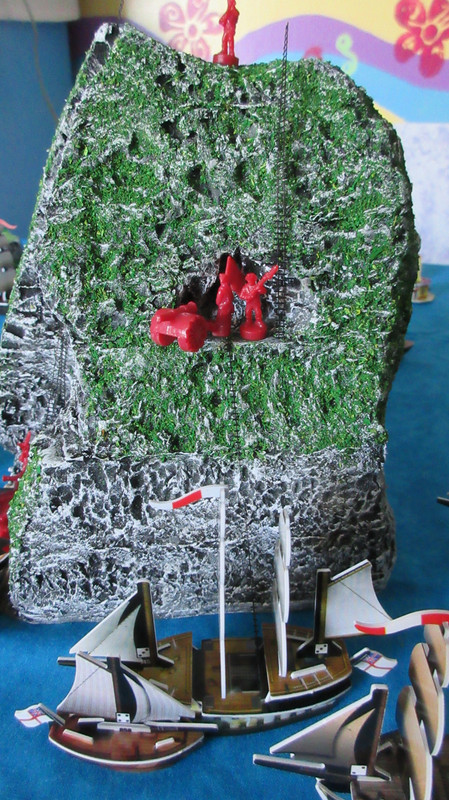 Thomas Gunn oversees operations from his new flagship, HMS Lord Algernon. He is happy with the progress and looks forward to getting revenge on the Spanish with his powerful new warship. That’s not all that is going on in this picture, though. At the upper right, notice the Galapagos and Serapis headed north, as they’ve been tasked with exploring that part of the sea. However, between intelligence gathered from the London and Victor (both of which have been in the area), the English generally already know that a Spanish presence exists in the northern corner of this Caribbean. Finally, at the lower right, the Metal Dragon and Bath have been launched. They are given a different task: whirlpool exploration. The English are relatively satisfied with their fleet in the area between the gunships and gold runners, and so they task the two capacious ships with going through the whirlpool near the Duke shipwreck (that the Freedom appeared from) and trying to explore new seas, assuming they survive the trip as Ralph David did. 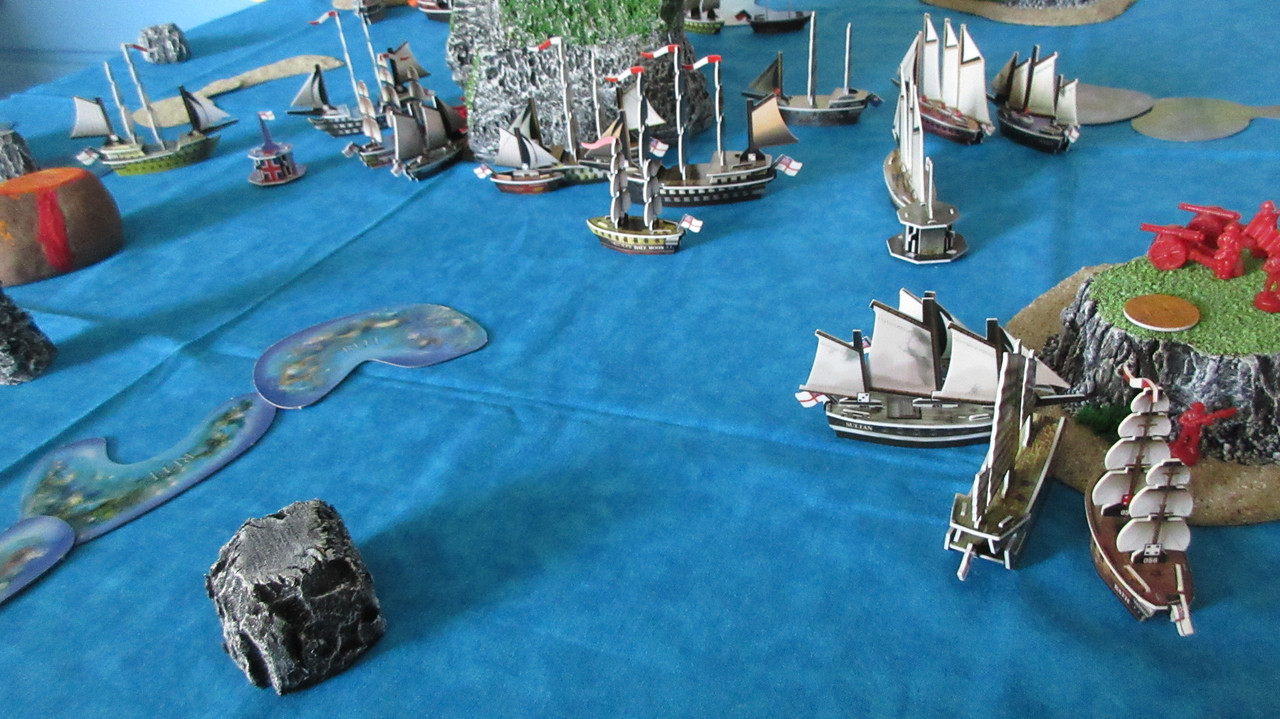 All of the Spanish ships in play right now. They don’t have more metals coming in just yet, but the Matthias Vospero has finished repairing and the squadron of 4 warships has amassed directly west of Diamond Rock! (Note: at this point you may have noticed that I have decided that Caribbean directions will be on the corners, with Paradise Island in the north corner and looking at the table on a diagonal as opposed to looking at it like a square as with the other oceans.) 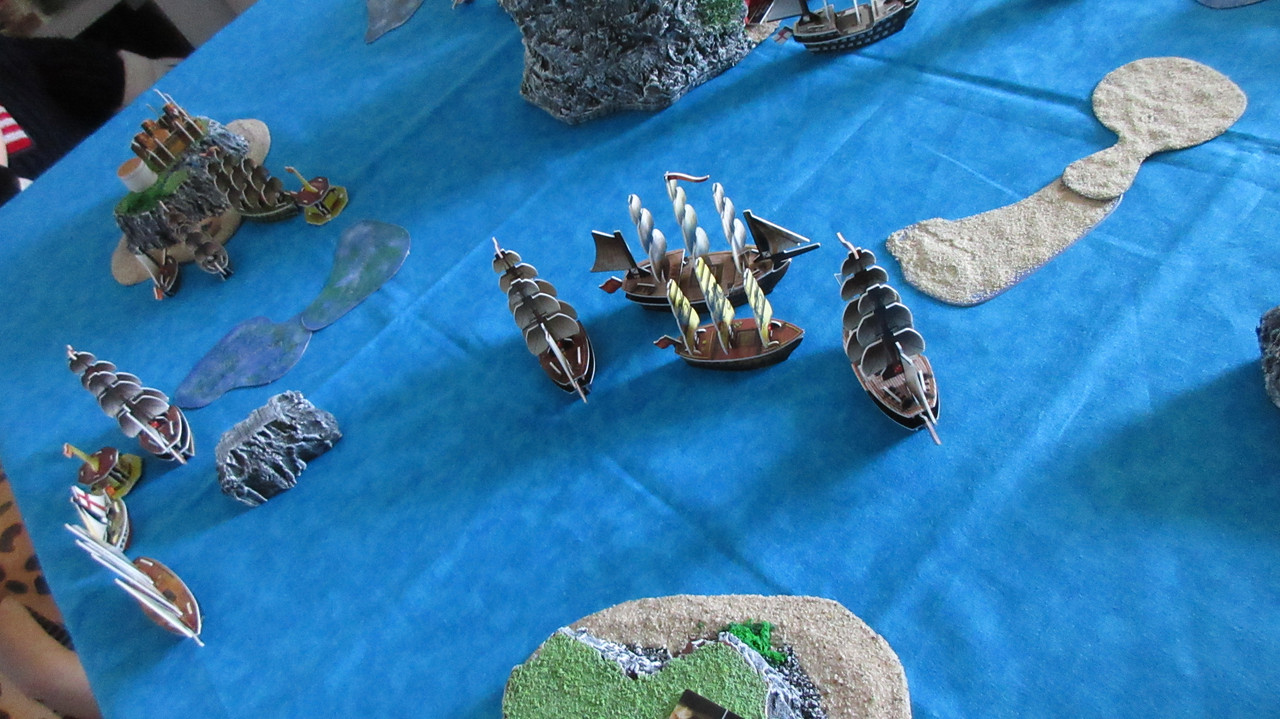 A pretty (if I do say so myself haha) shot of the French area, where the Soleil Royal has signaled for the Jeux to head west. The Dauphin Royal guards The Flat while some ships in the foreground pick up luxuries. 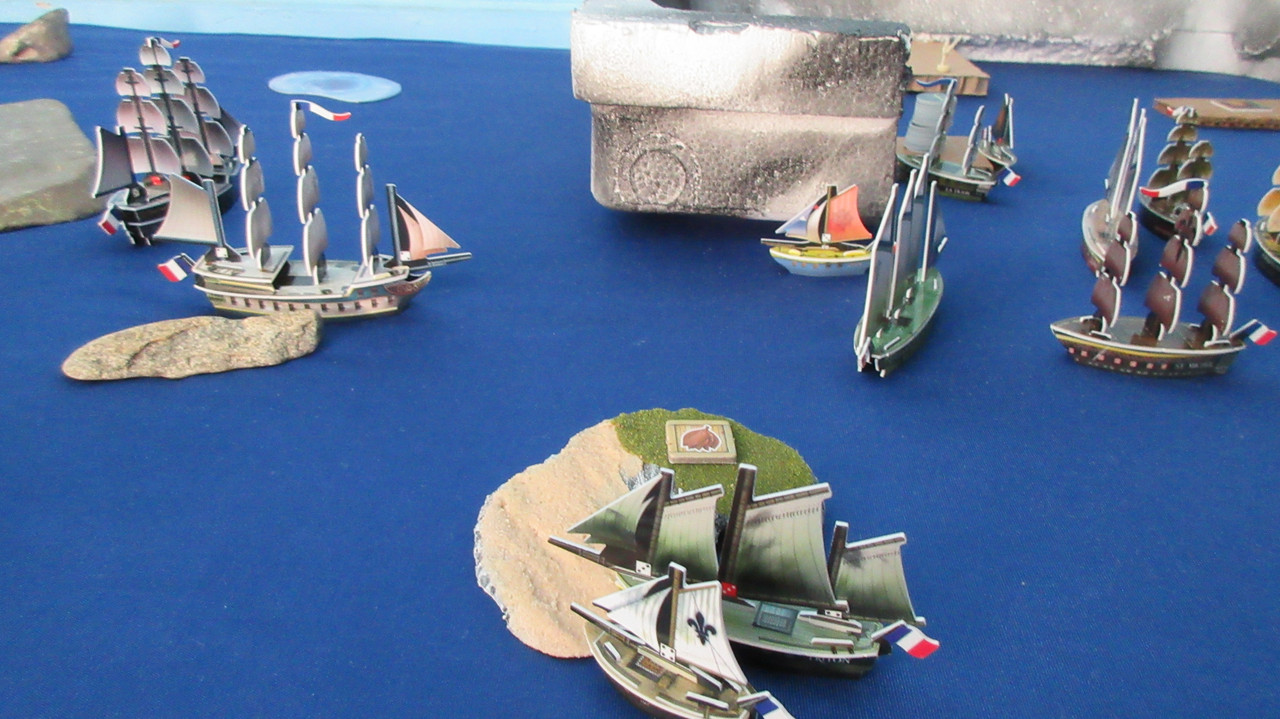 The Americans break through the opening! The Congress almost immediately spots a new island, while the Minuteman and Concord excitedly join her. 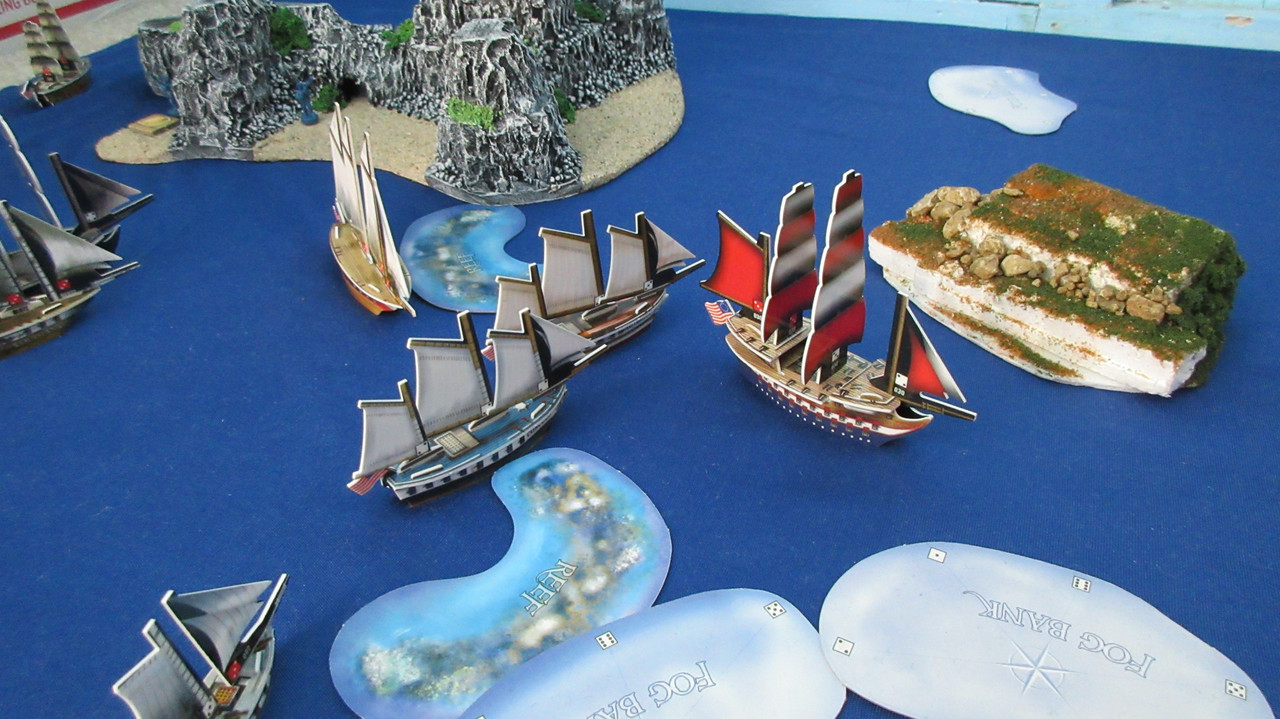 The rest of the American fleet goes about their usual business of gold and resource running. William Eaton and the troops on the HI are happy to hear from Brent Rice that Luck Island is producing resources again. 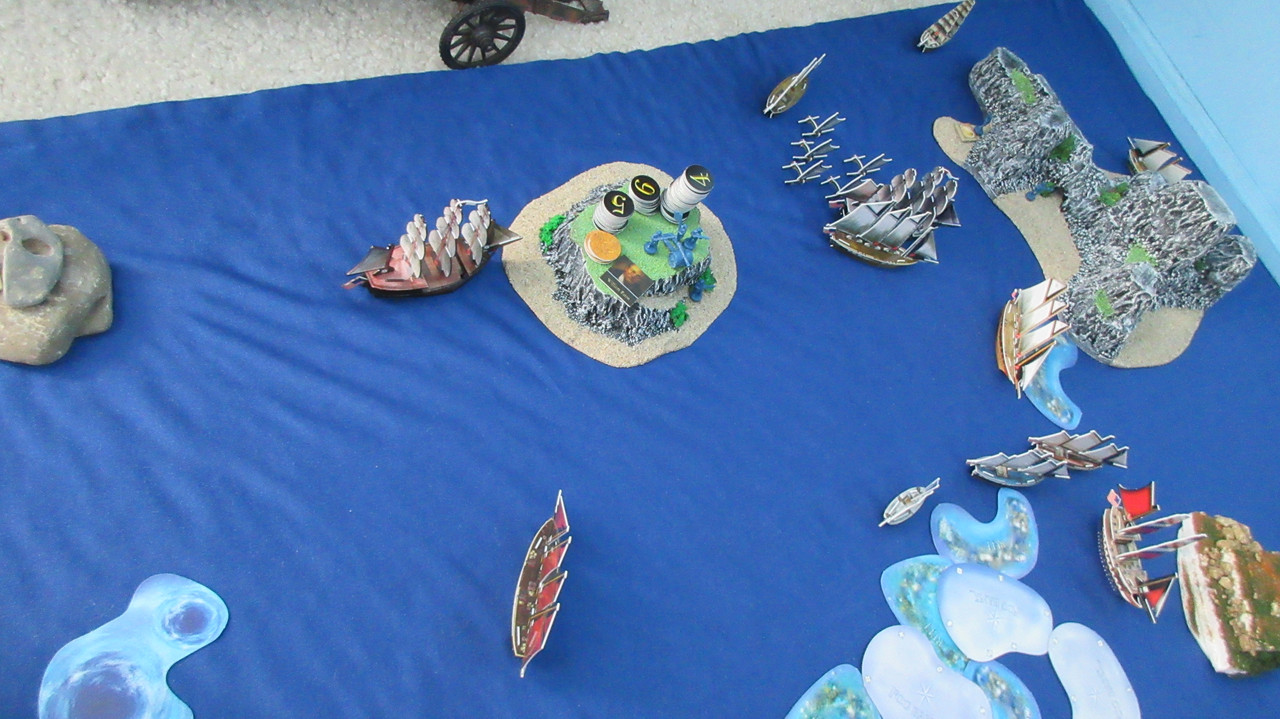 The Pirates didn’t have an eventful Turn 35, but I wanted to take these two pictures just to show the extent of their frustration. Here, 4 ships have left the southern entrance to their kingdom, but their exit is preventing the Golden Medusa and Adventure from coming in yet. Making things worse, the Otter and Foresight are trying to exit to the south next turn! Speaking of the Otter, the Pirates have realized that galleys are a terrible launching choice for them, since one galley in an entrance essentially blocks the entire path for other ships, whereas they can fit two regular 4 masters side by side. As a result, the Pirates aren’t likely to use many of their galleys in this game, unless they are tasked with far-off war duty or they find a way to launch outside of their HI. 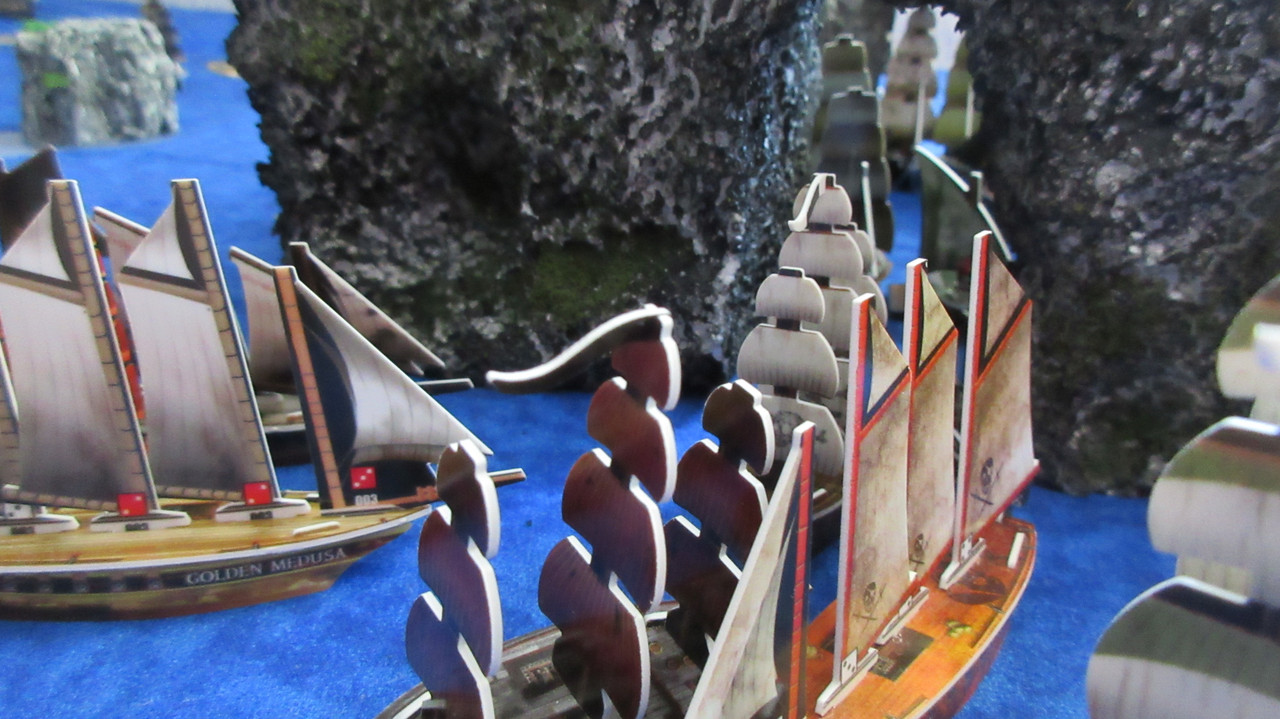 The northern entrance is complicated as well, with the Eagle dropping off very valuable textiles and the Fool’s Gold spending an extra turn under the arch to repair the mast she lost to the Freedom. Those ships prevent the Lady’s Scorn and Accused from leaving for at least a turn. Based on the kingdom’s extreme value as a defensive haven (especially for a ship or gold you REALLY wanted to hide for a long time), I think this is a necessary drawback of the Pirates (the most effective faction in the game) having it at their disposal. However, it remains to be seen if the long-term value of the kingdom will be worth it by the game’s end. 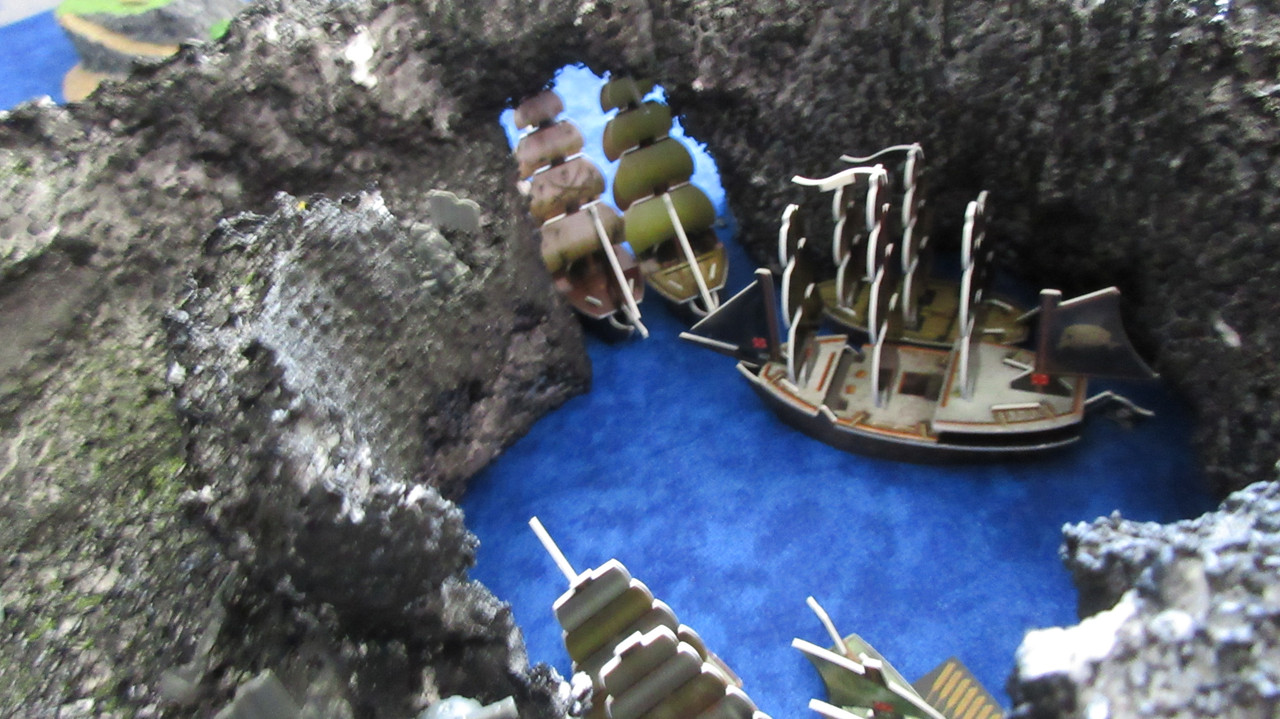 -Back to the Caribbean-

ATTACK! The Tartessos sails towards Diamond Rock and hits 4/4 to damage the London and take out her helmsman with Grape Shot! The San Estaban missed with her firepot specialist, but hit on her other shot to take the London down to 2 masts. Remember no ram damage, but that 6 is actually for the London’s boarding party – she rolled a 6 to tie! Looks weird, but the San Estaban has the Weapons UT which gives her +1 to her boarding rolls for every crew aboard. With a captain, helmsman, and firepot specialist, the SE is basically starting a boarding party with a 6, but she only rolled a 2 here to tie with the London’s eventual score of 8. That 6 saved the London’s captain, and she also has fire shot aboard. 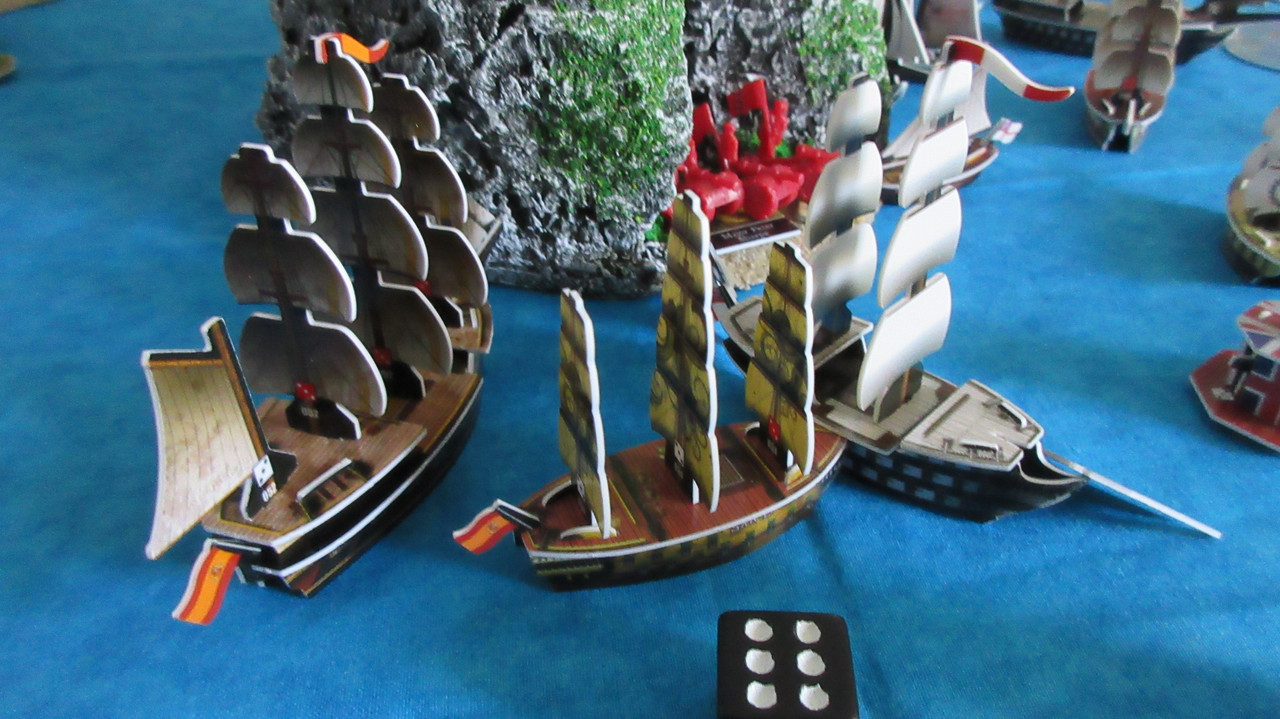 The Matthias Vospero is out for more revenge, but isn’t nearly as effective the second time around, hitting just 1/4 with two shots apiece aimed at the Bretwalda and London. The Galeon de Gibraltar is the only Spanish ship not to shoot this turn, but provides nice support. The English are once again caught somewhat by surprise, and their arrogance has left them with a strong-but-not-strong-enough presence right near Diamond Rock. 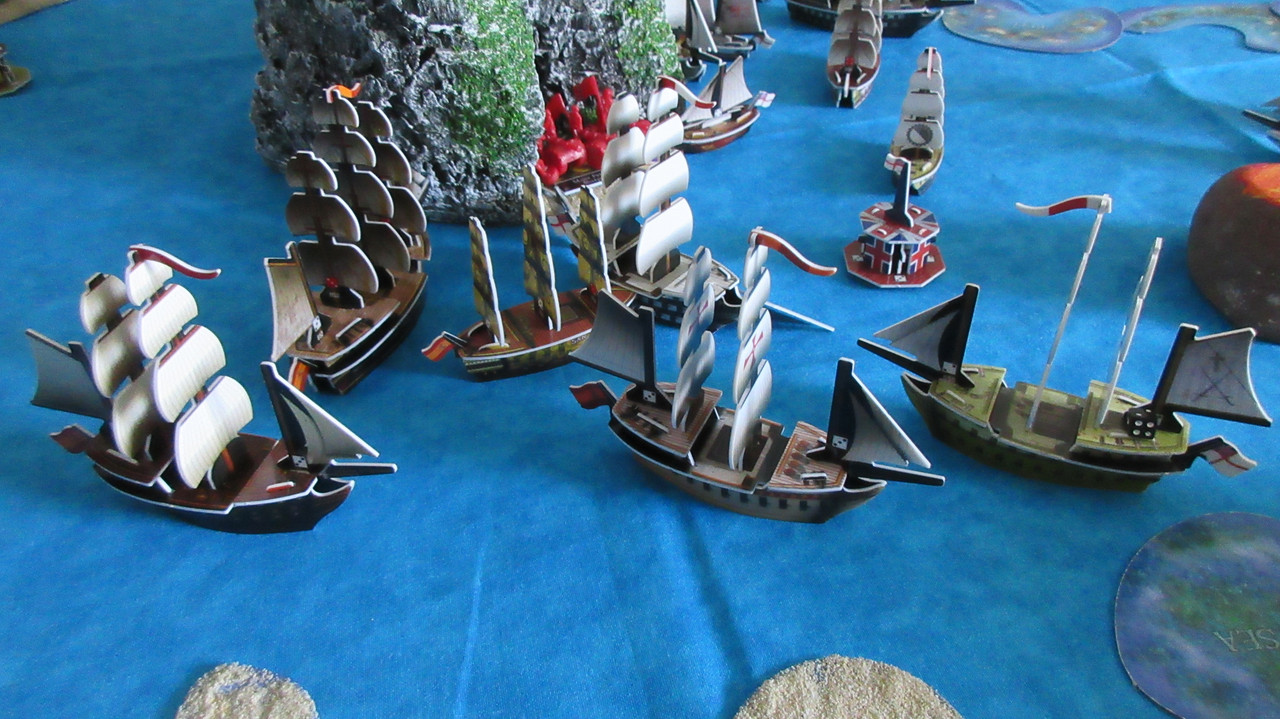 The Americans venture deeper into the Sea of Karkuda, with the Minuteman finding the 5th and final beach of the big island! Commodore Preble should probably stay behind to ensure safety of the American HI, but he can’t resist taking the President through the opening in the reef to have a look for himself. 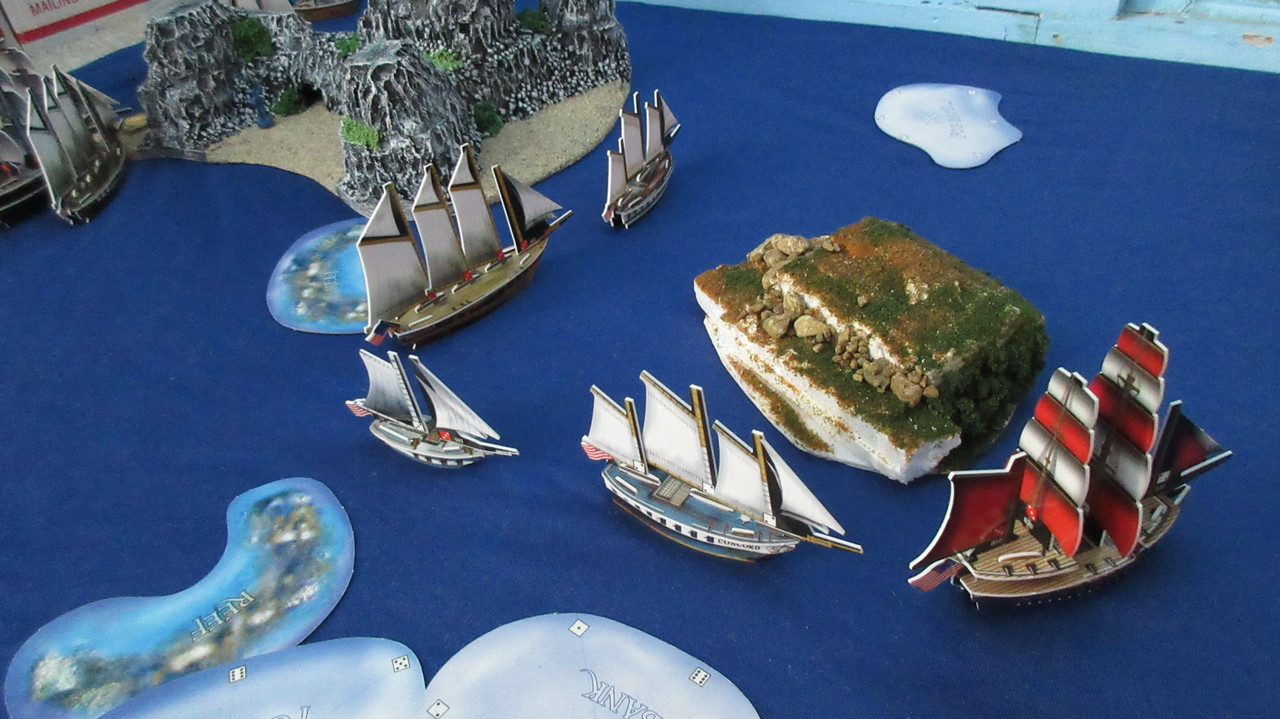 And now it’s clear that Preble isn’t needed to guard the American HI right now anyway! Spending all 57 of their saved up gold, the Americans launch the Concord and Flying Fish as well as two new cargo ships. That’s right – Ralph David returned home and was able to convince his fellow Americans to spend money on some anti-Pirate measures! Citing his quick and effective trip through the whirlpool (now the Americans can go straight from Karkuda to Allost without rolling for location, remember), as well as the abundance of textiles and large Pirate hybrids he found on his first trip, RD was able to argue effectively that the Pirates are a huge threat to American security and that they were even richer than the Americans themselves. With that, David now has 2 more ships to throw at the Pirates. The Americans also launched the Providence and Rattlesnake, for the purposes of exploring and gathering cargo from the newly discovered area northeast of the reef hole. Also note the immense quantity of food on their HI, as the canoes just brought back another 10 tokens of that resource. 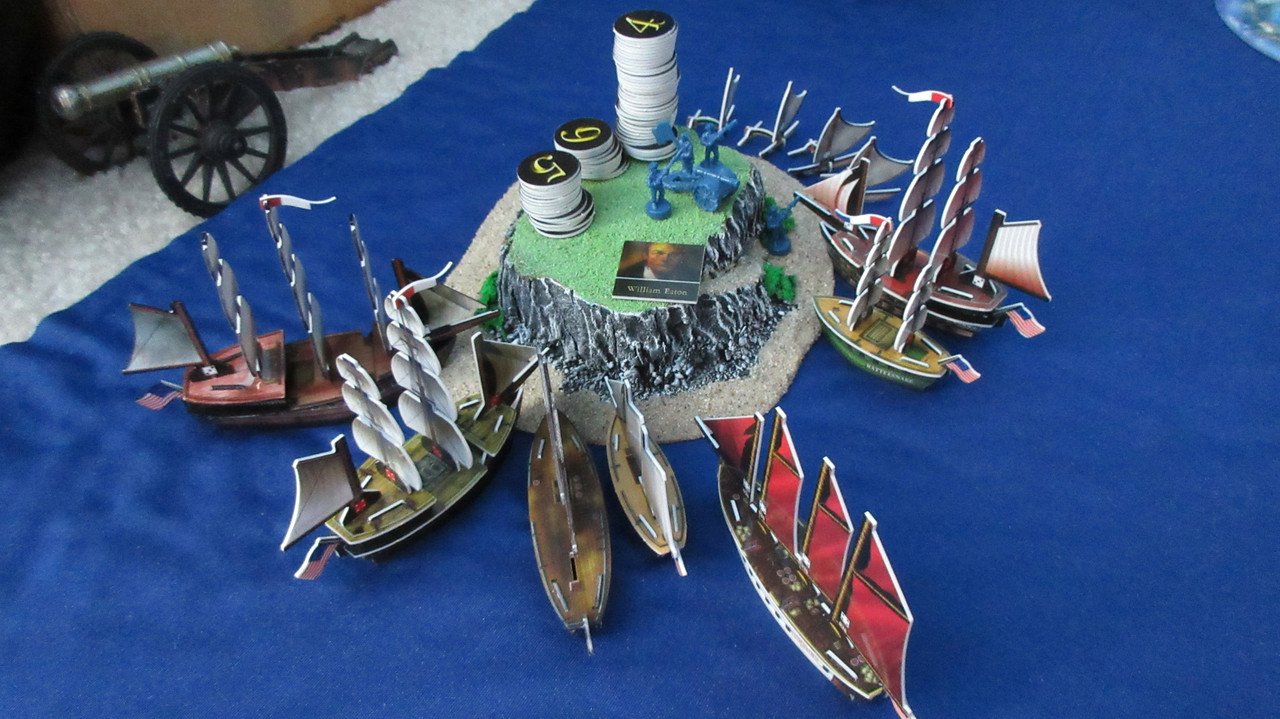 After a few turns of stagnancy, the Americans have not only rediscovered resources on their southern islands, but they also have sailed into a new area and are looking great once again.

And that concludes this report! Things are getting more and more interesting, and with a larger amount of turns happening in the near future (possibly 4+ each of the next three days!), many developments are just around the corner!