Play has continued! For the most part, it looks like my schedule will allow me to play at least one turn per day for the foreseeable future, which in this case is about two weeks.

Looking west for a change, you can see the Pirate fleet returning home to their kingdom. 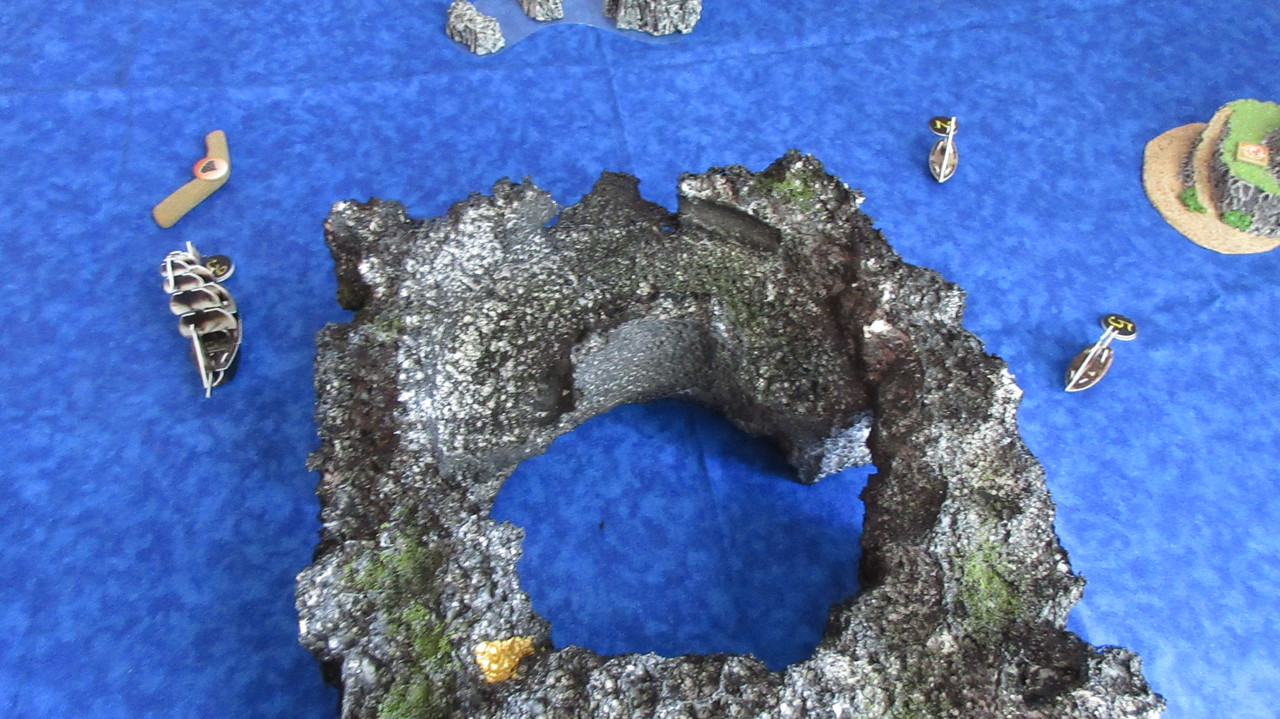 The Jade Rebellion has found a wild island near their home island! 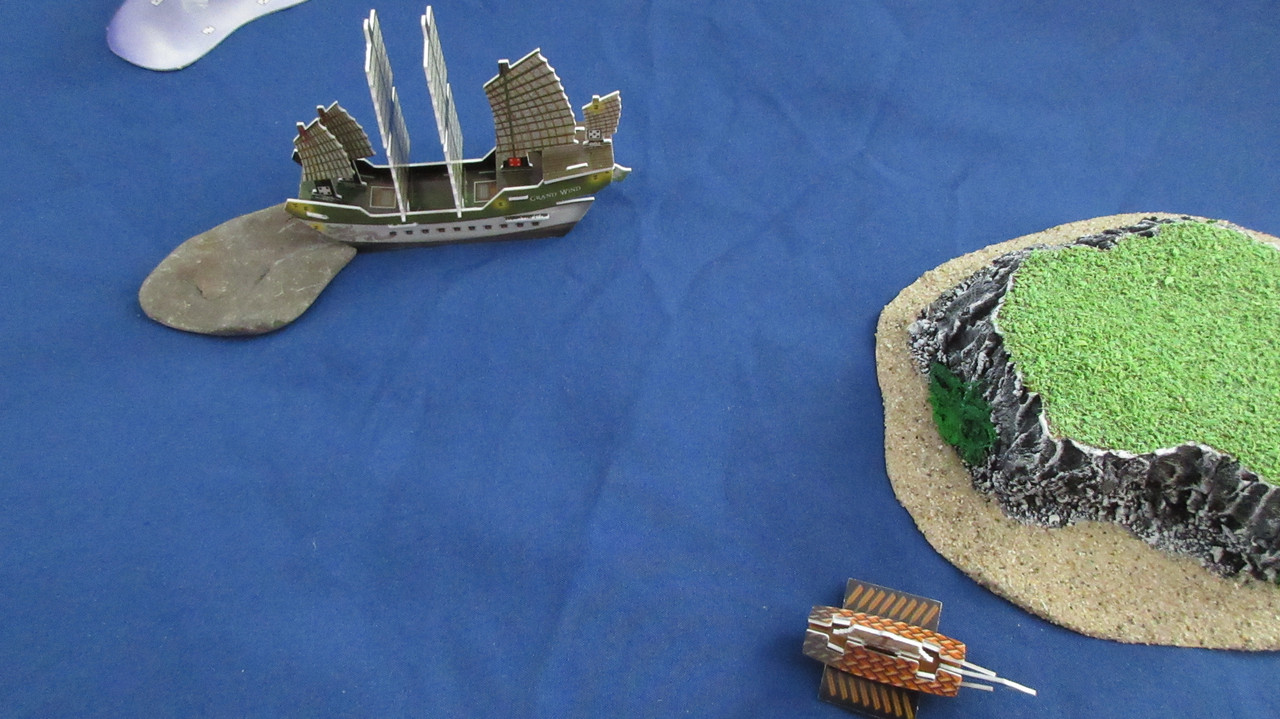 The English leave a little surprise for any potential comers – Major Peter Sharpe is stationed on Diamond Rock’s only beach! Thomas Gunn dropped him off with instructions to stay hidden but shoot at any opposing ship that tried to dock. 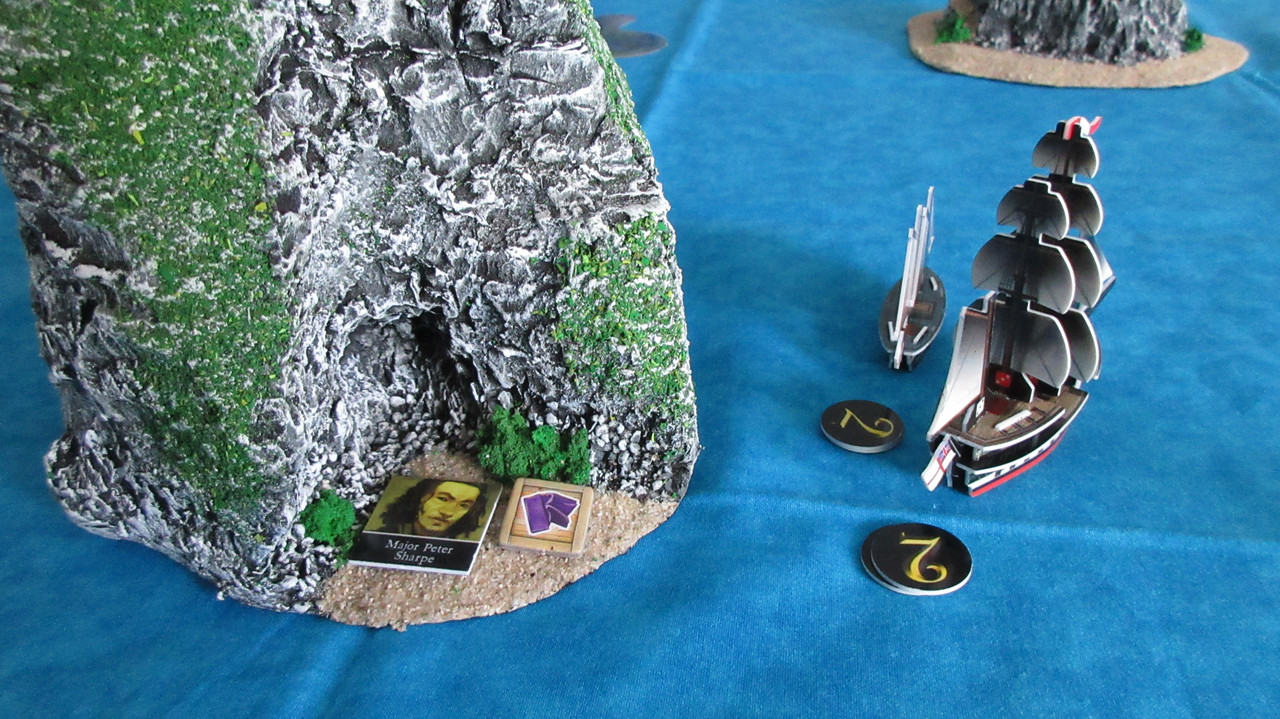 With the Ebro in the lead, the Spanish form a line and start sailing along the side of Diamond Rock. The San Estaban is prepared to defend her gold runners from the English if necessary. The Spanish are continuing their somewhat cautious strategy, not sending their gold runners out too far by themselves and now not going where the English just sailed. They don’t know about Sharpe’s presence, but they seem to have made a good decision so far…. 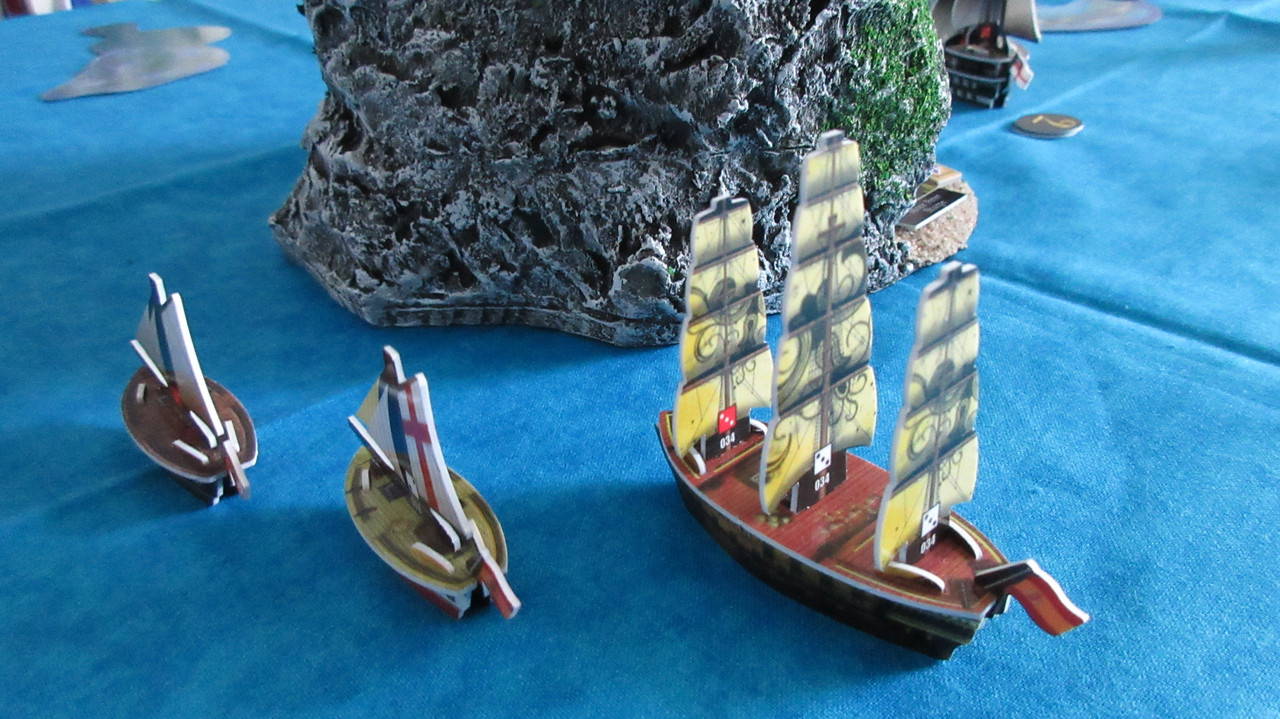 The crew of the Ebro anticipate potential danger on the far side of the rock: 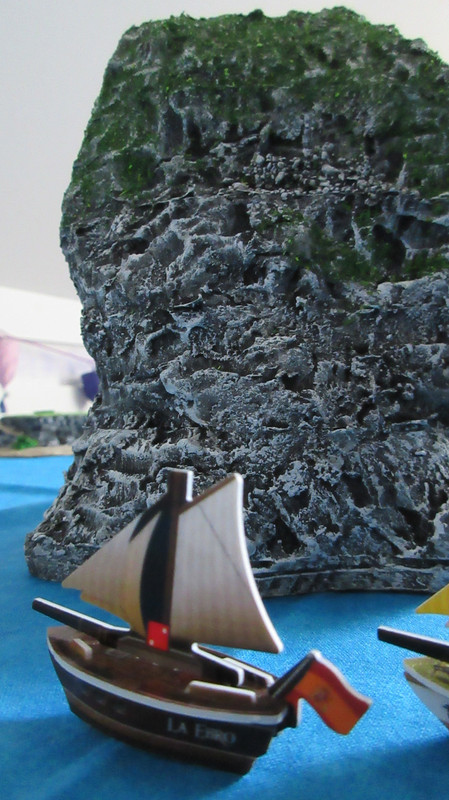 With extremely valuable food on board, the Soleil Royal and Marianne hurry back into their Harbor to unload and cash in: 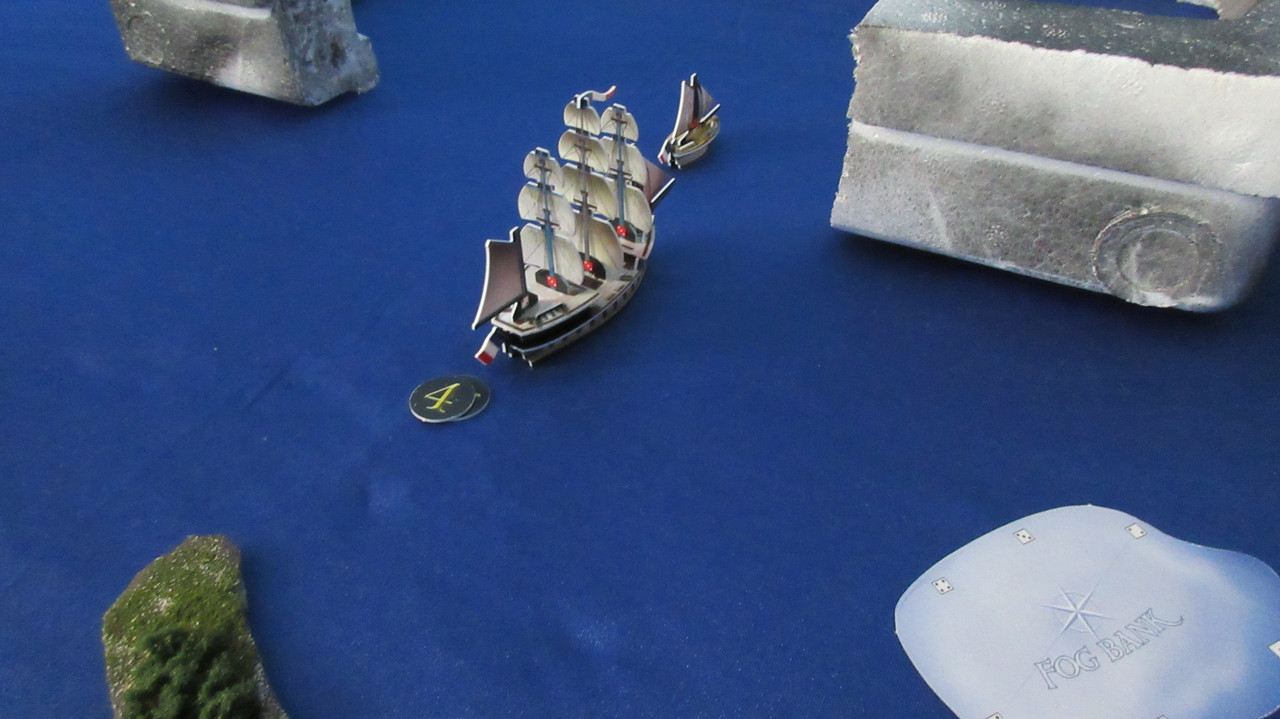 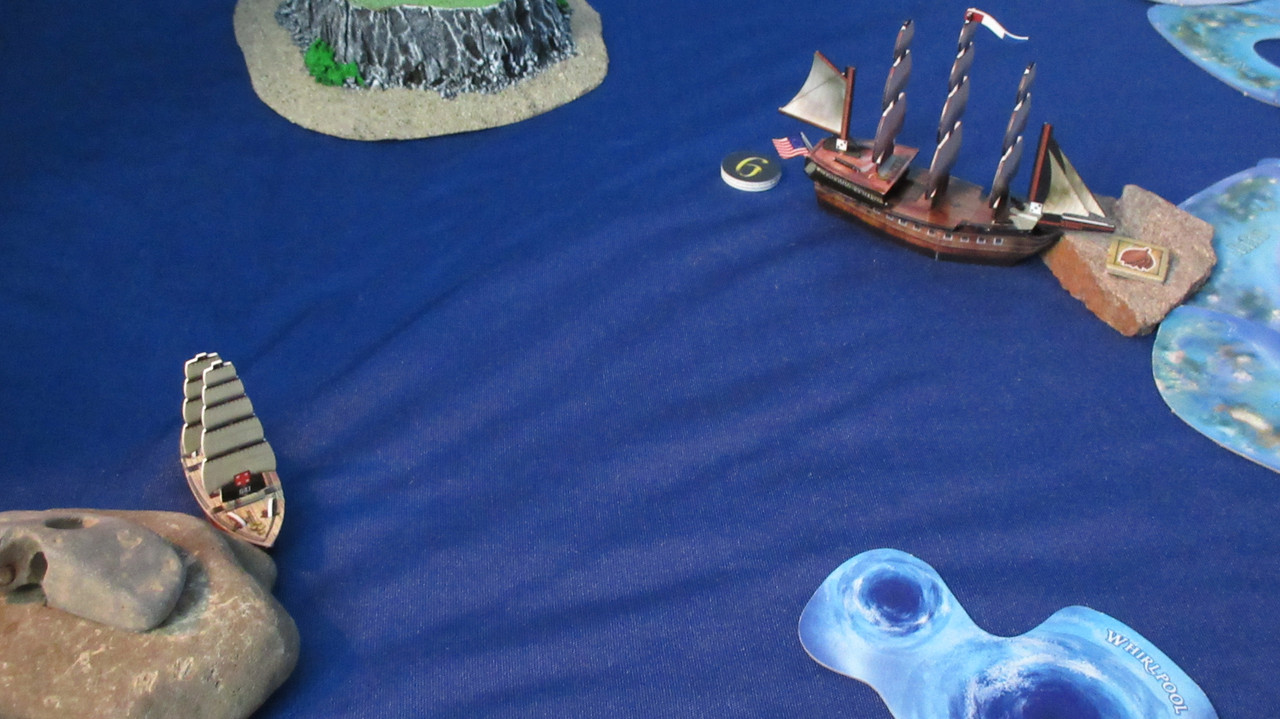 Back to Allost, where the Pirates are about to get home. From the main topmast of the Cassandra, the Fancy unloads her spices at the northern arch of the kingdom. 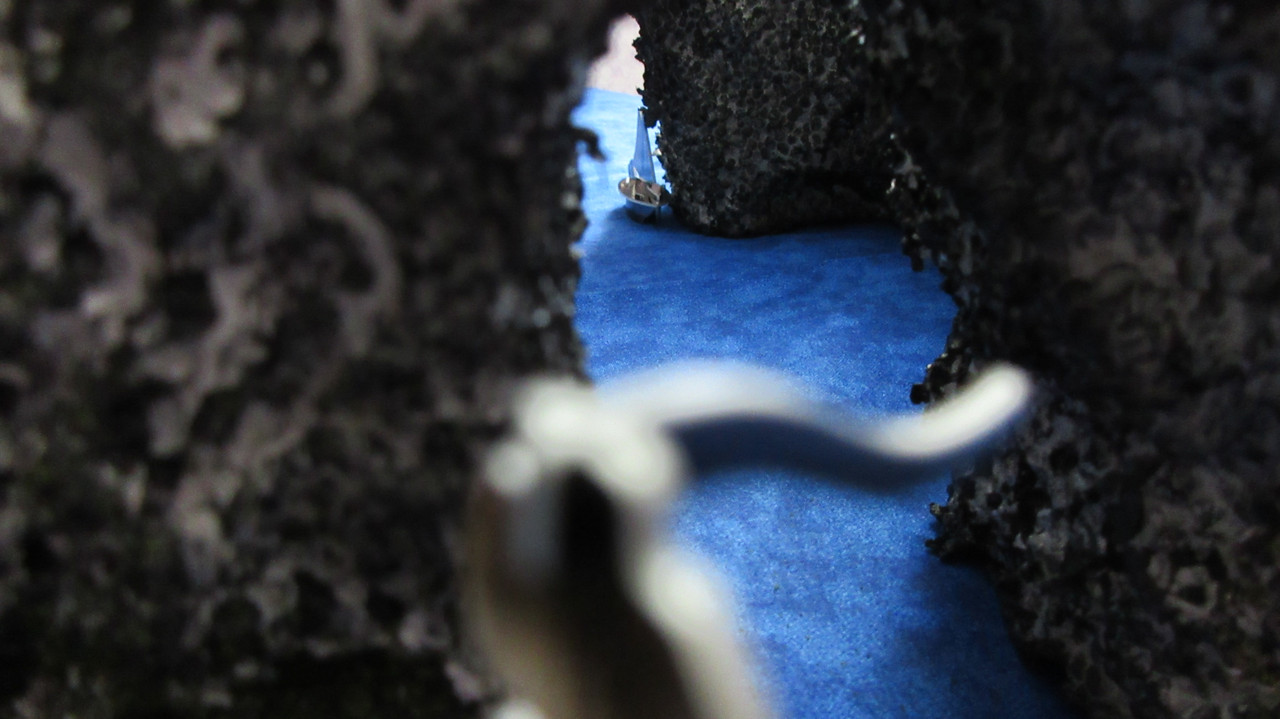 Spices are still nearly worthless, so Mission’s Pirates have to wait another turn to think about launchings. 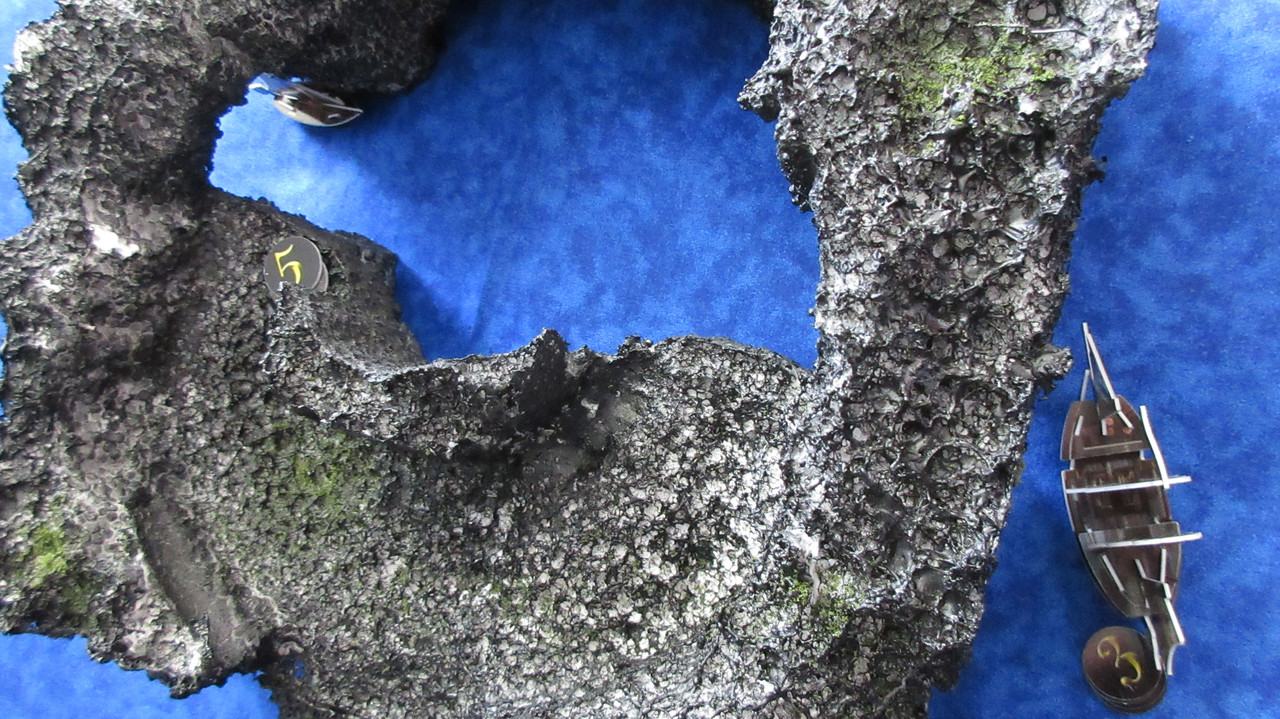 The Grand Wind explores the island and finds textiles! 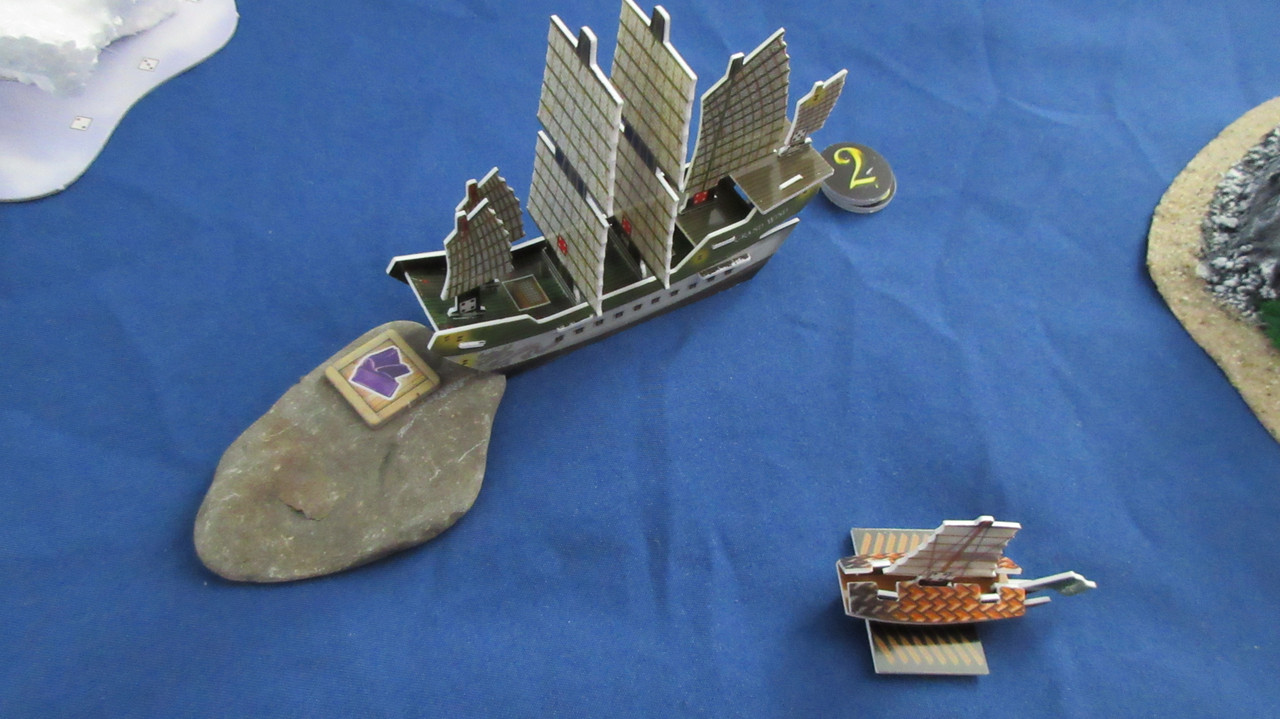 The power of the Royal Navy, seen at deck level. Run out the guns! 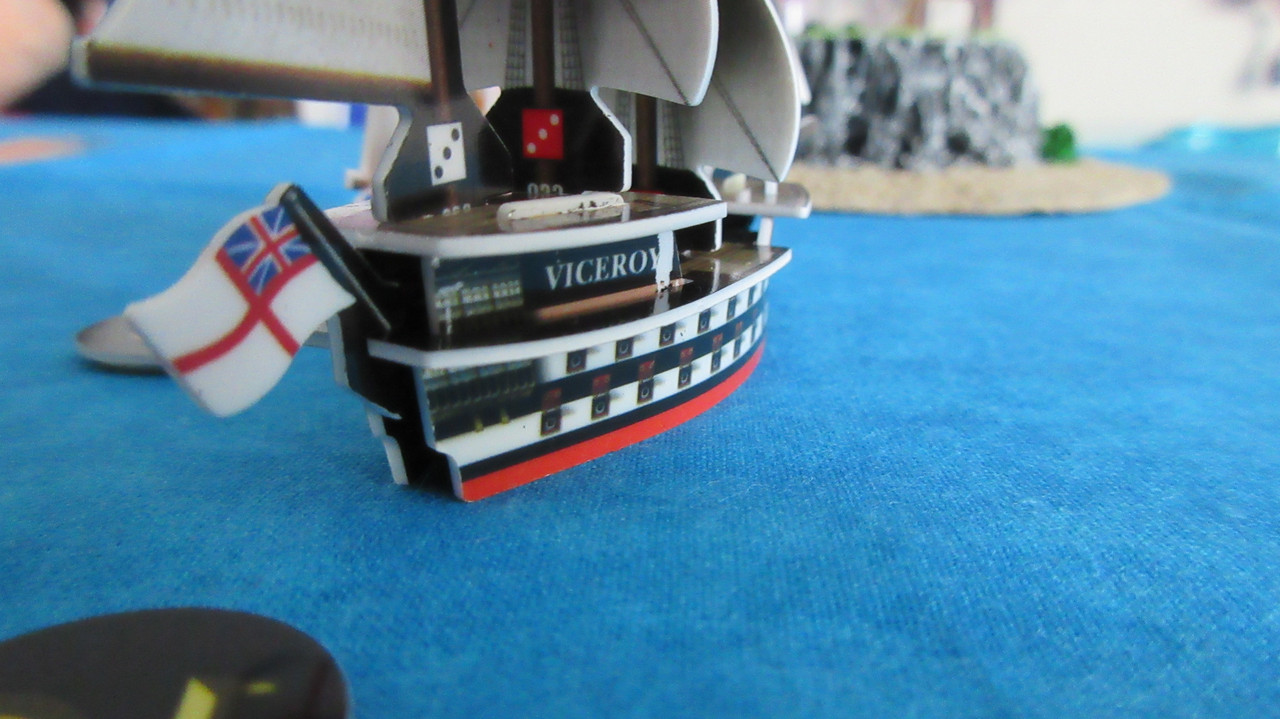 The Ebro leads the Spanish around the sargasso sea she found earlier, and you can glimpse the Apollo beyond Diamond Rock to the right. 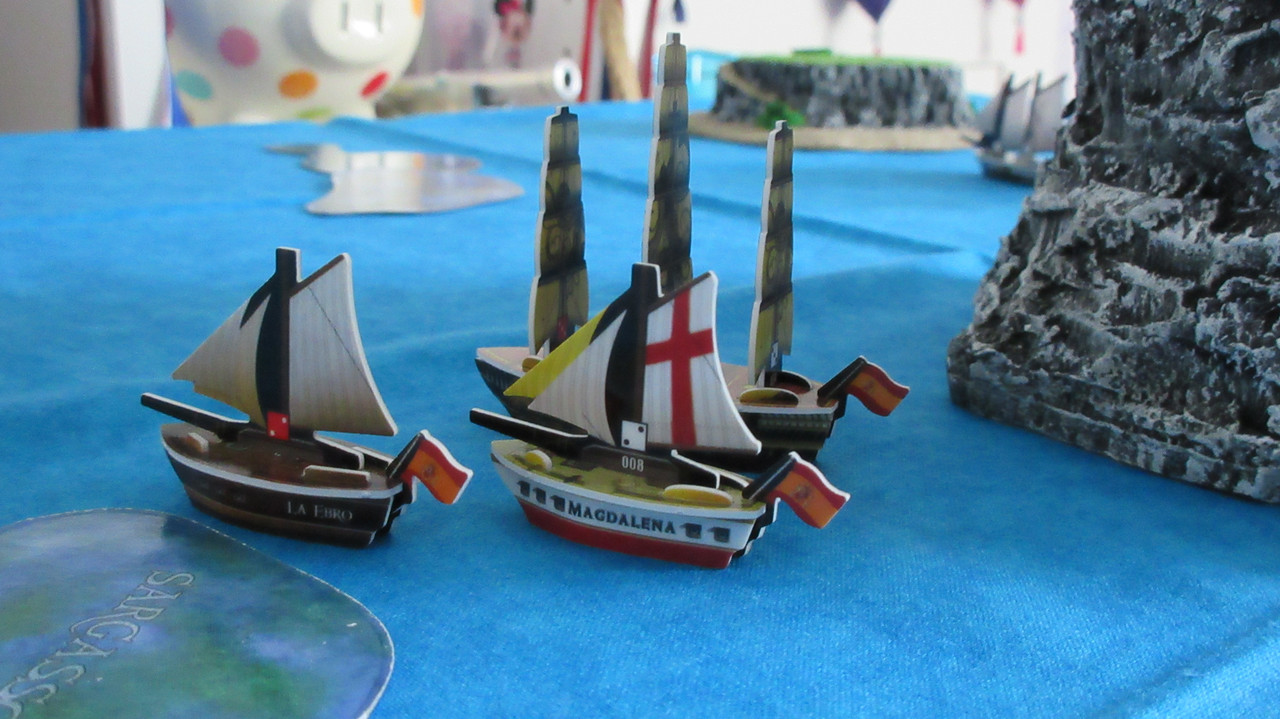 In search of new islands, the Spanish forge onward in the shadow of Diamond Rock. 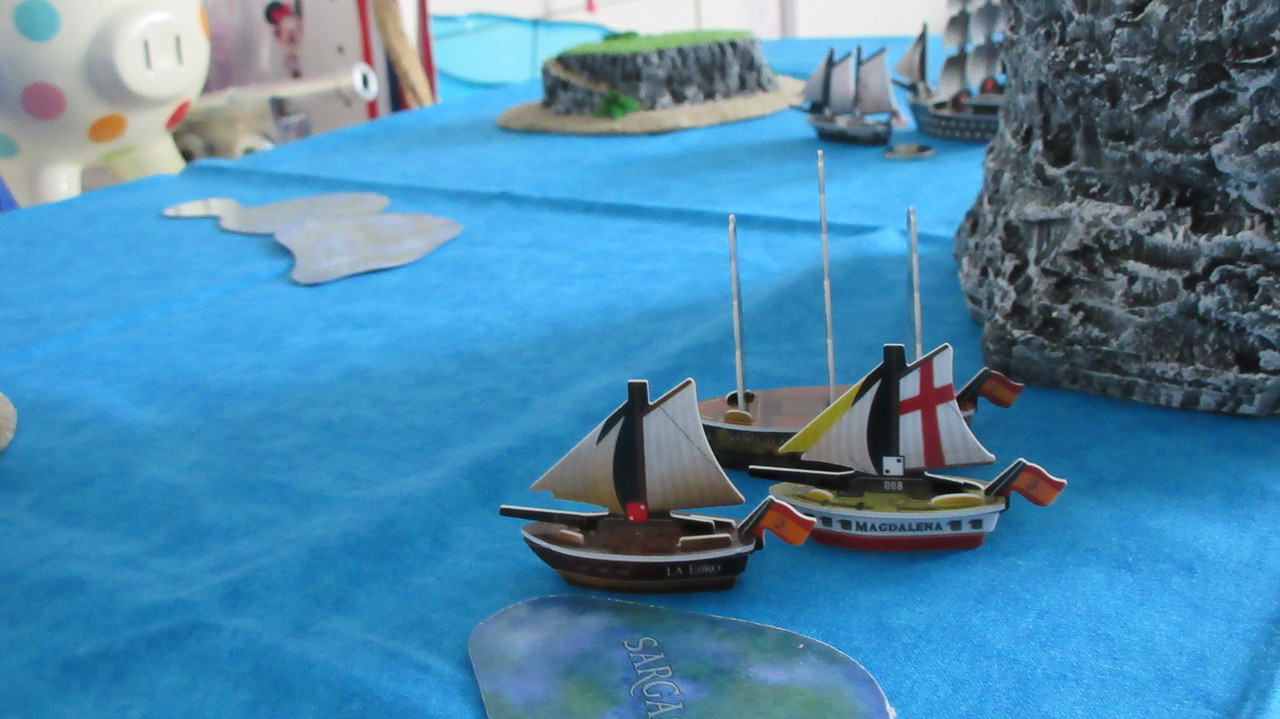 From the San Estaban’s mainmast, the other side of Diamond Rock: 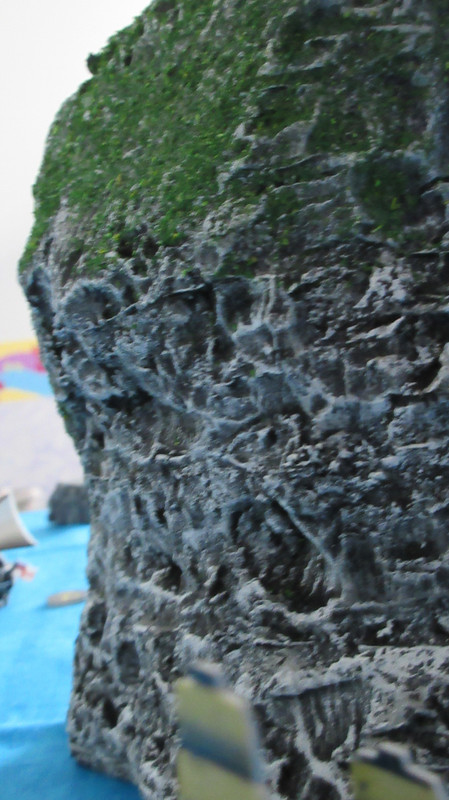 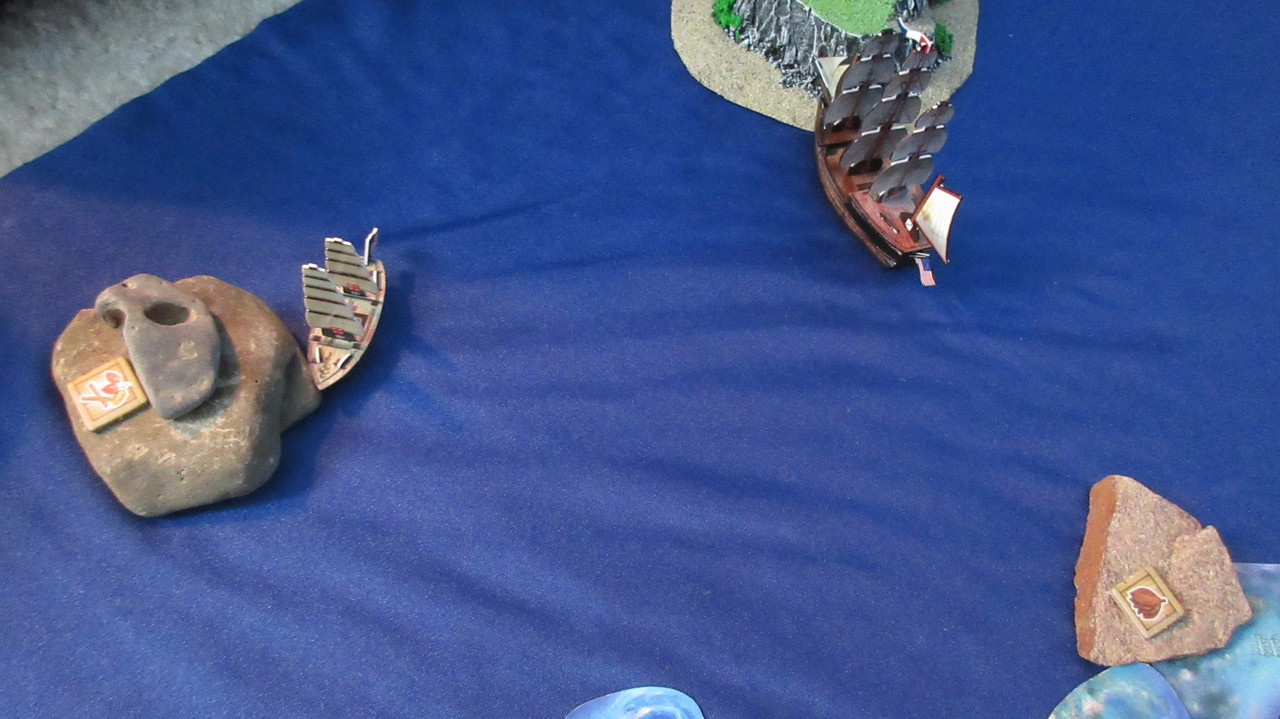 Tough to get these shots since the hole is so small, but you can glimpse the Argo’s mizzenmast sail from the hole in Luck Island, where spices have been found. 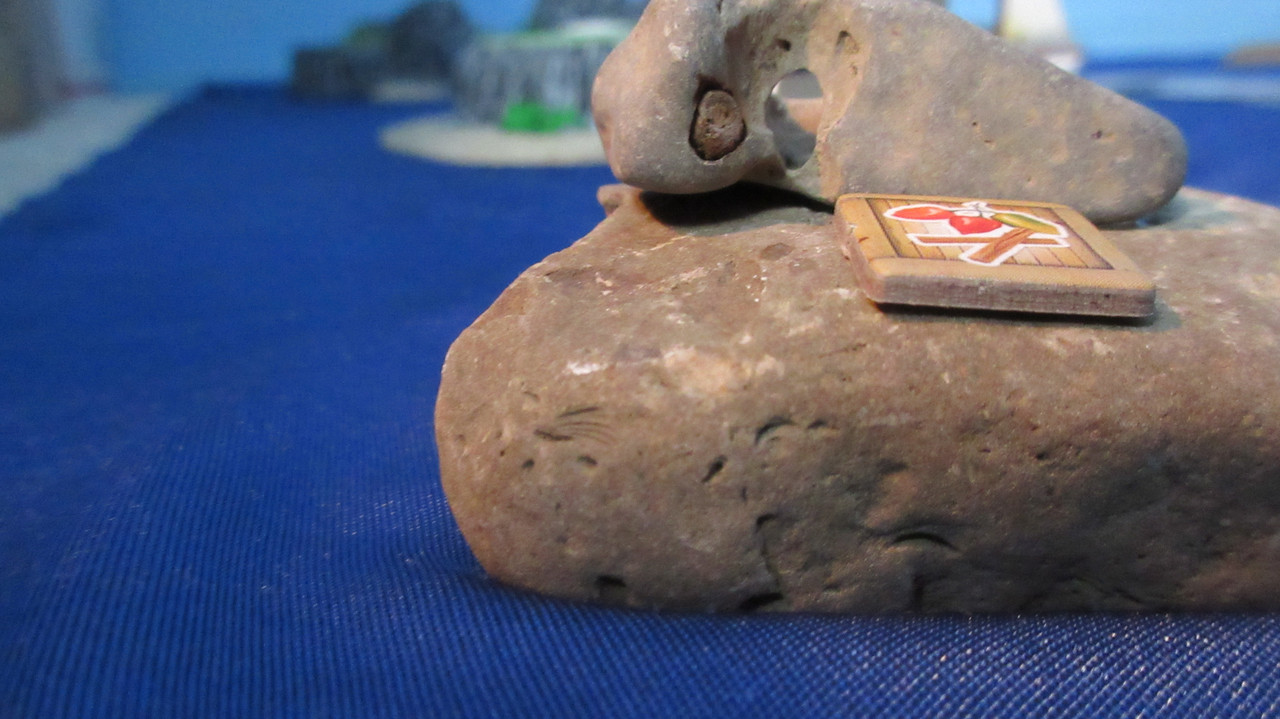 The first launching of the game! The Cassandra and Smiling Jim docked home some good resources and cashed them in for 29 gold. Mission gets his own ship at last, the Crusher! He also ordered construction of the Doombox, a nice flotilla from the same super rare pack. However, the Crusher won’t tow the Doombox since she’d lose the speed bonus provided by her new helmsman. 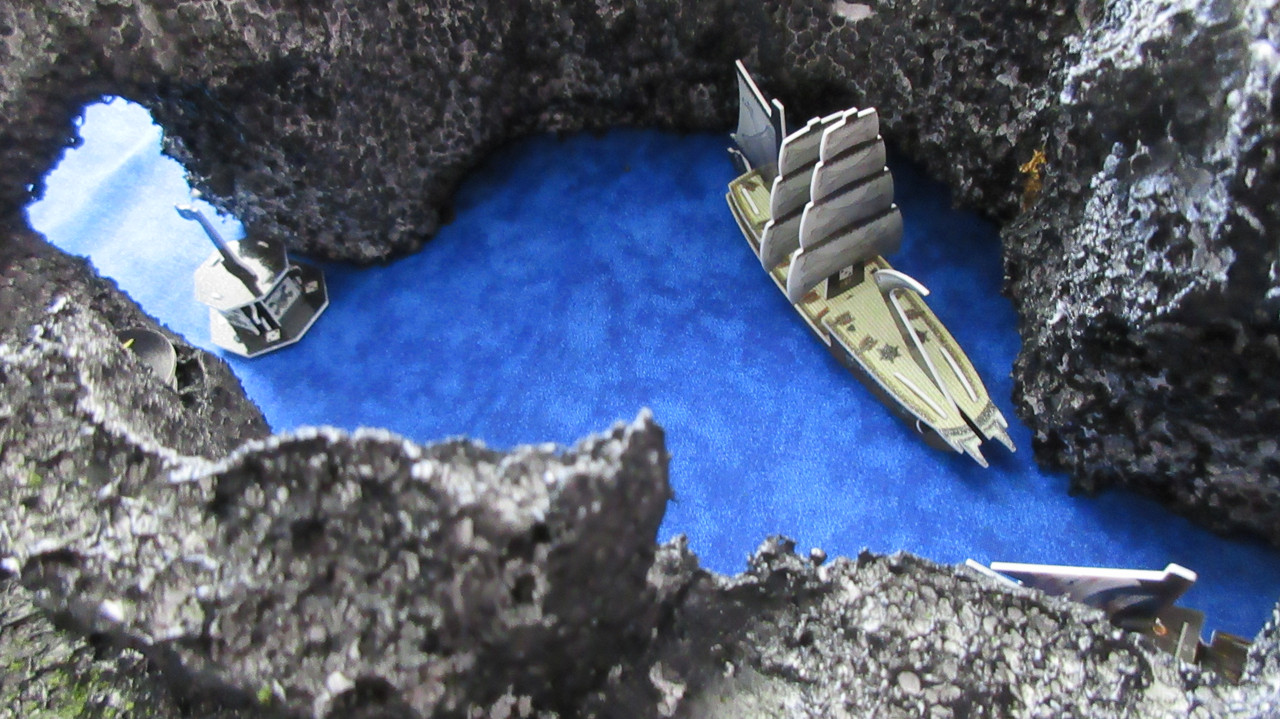 Mission transfers his flag from the Cassandra to the Crusher, as the Crusher is now the Pirate flagship. The Cassandra will continue to gather lots of resources, and Mission made sure to hire crew that would maximize her effectiveness in that role. 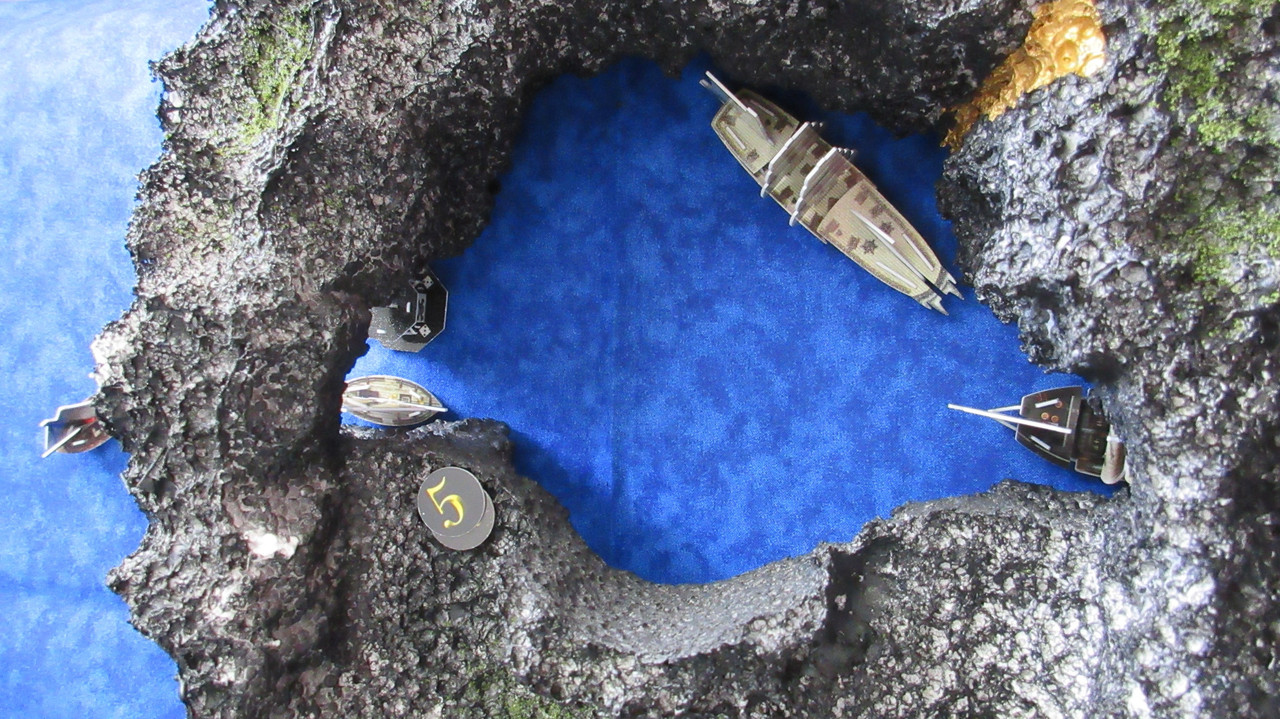 Here you can see the shakeup. Mission boards the Crusher with a new captain and helmsman, but makes sure to outfit his old ship with good crew to not leave her forgotten. Indeed, the Cassandra is more effective than before, with potential for 6S speed between the helmsman and Gunner’s SAT ability. 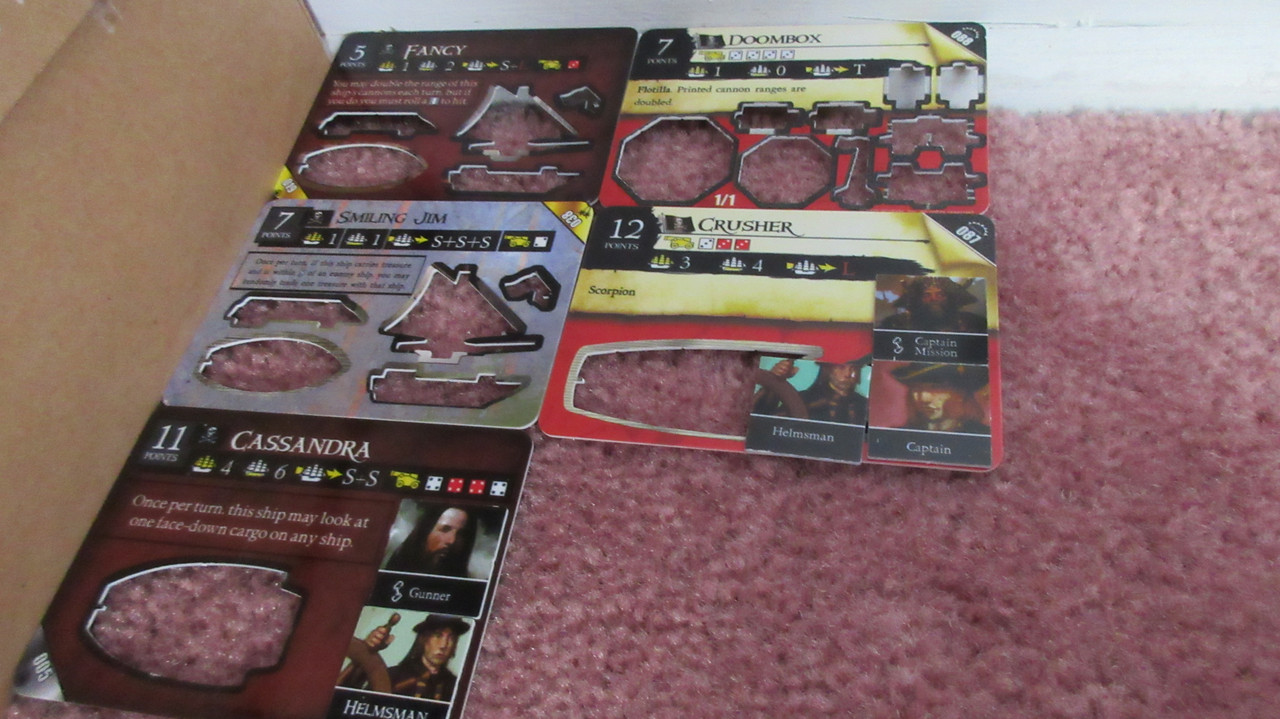 The Grand Wind sails the quick trip home, while the Sea Snake loads some textiles of her own: 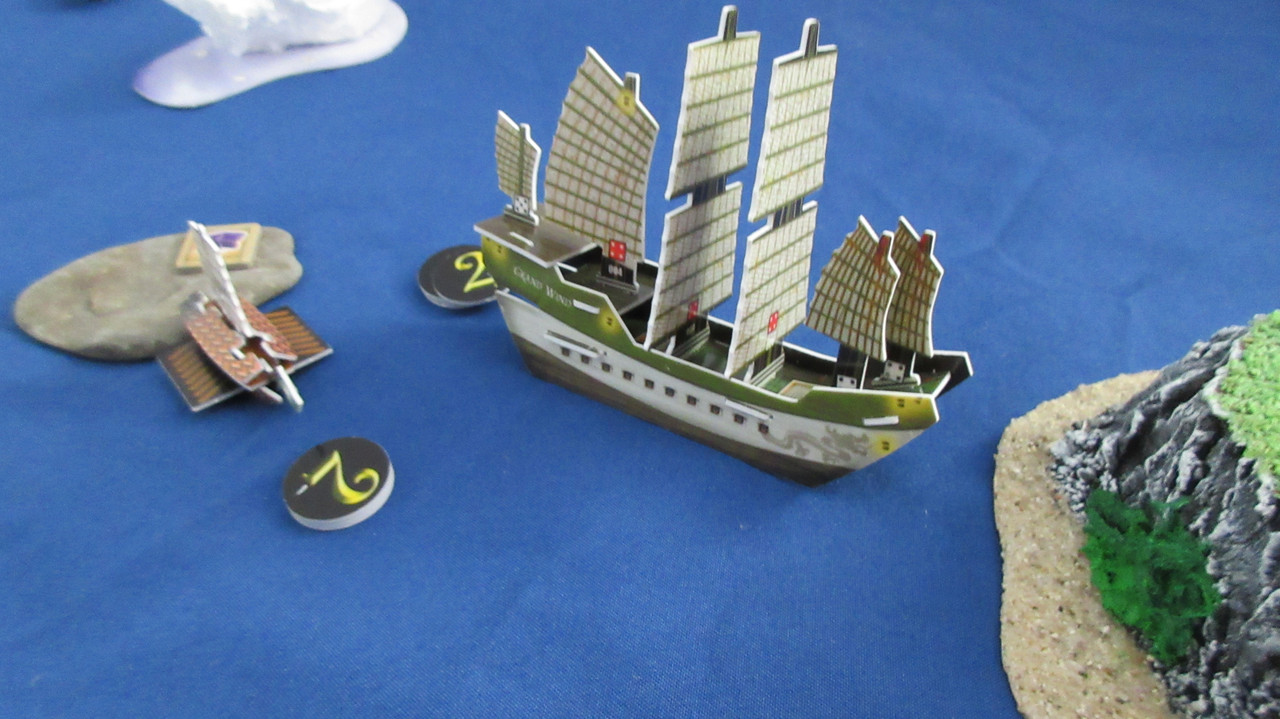 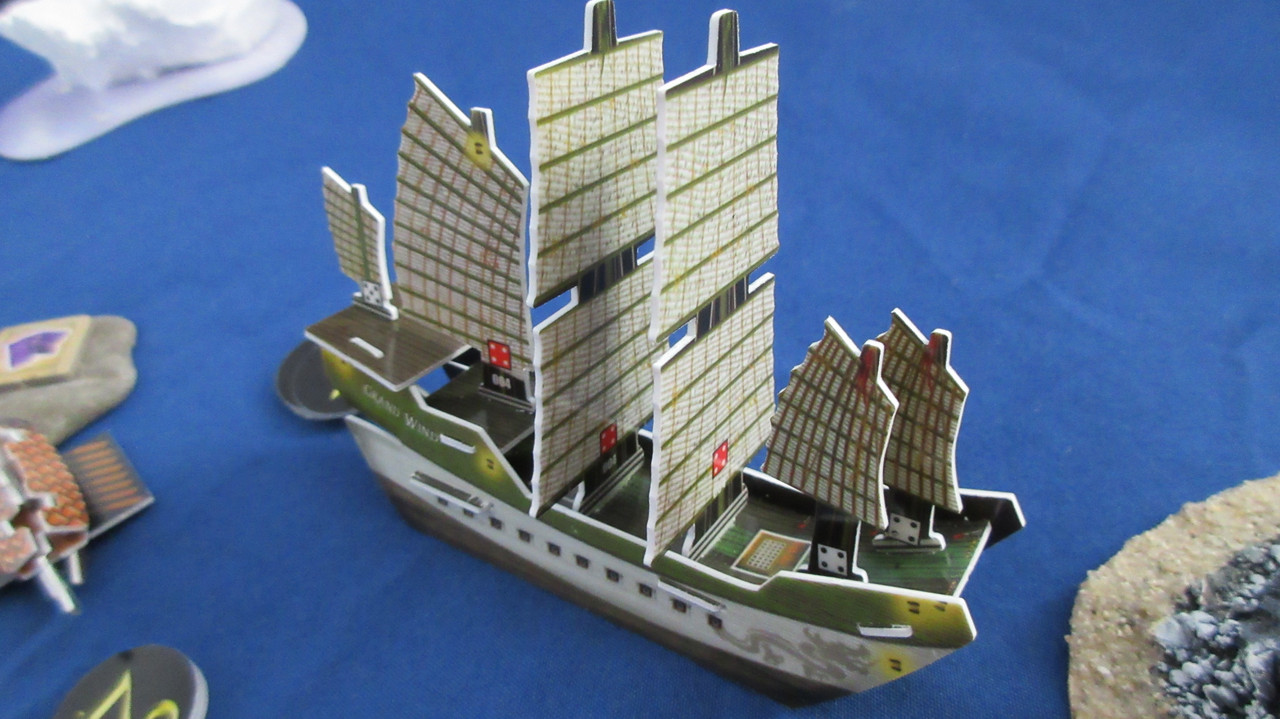 Spending 16 gold, the English purchase HMS Half Moon with a helmsman, as well as the first army units of the game! Two infantry units will board the Apollo, while the artillery cannon has been taken aboard the Viceroy. 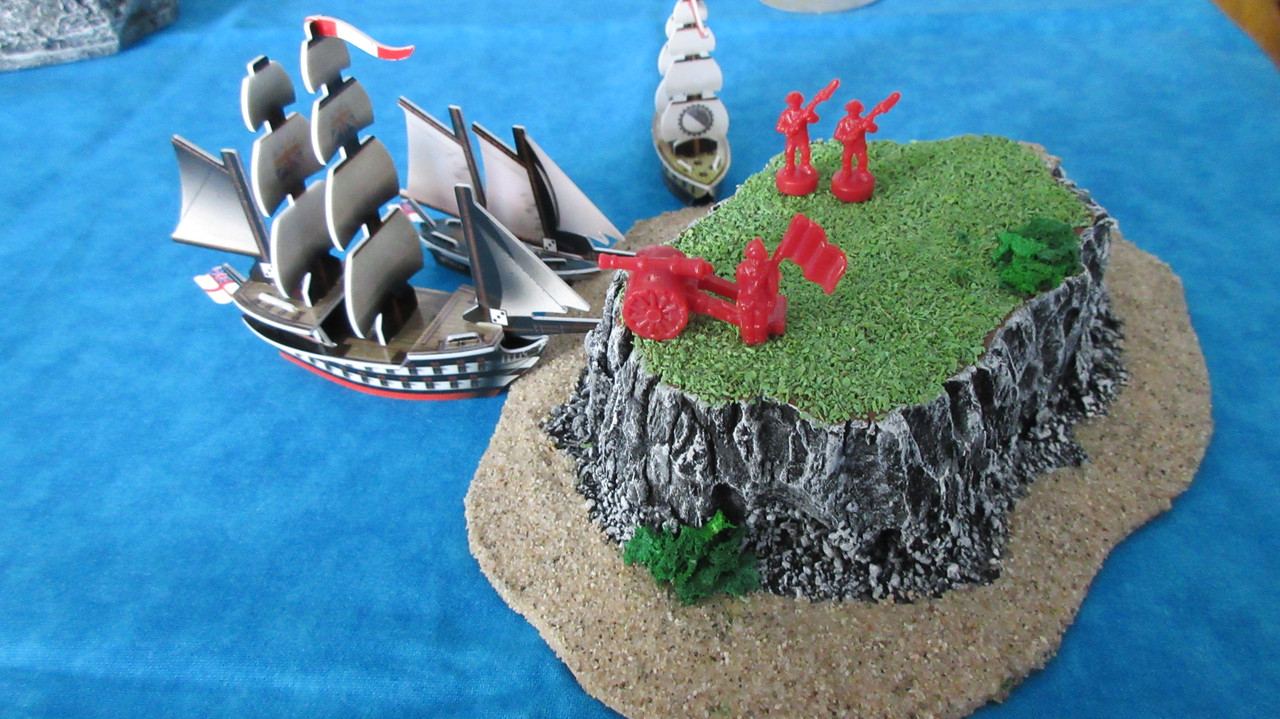 The English know where they’re going with the new units, and I guess there’s not much to speculate about even for you as the reader! XD 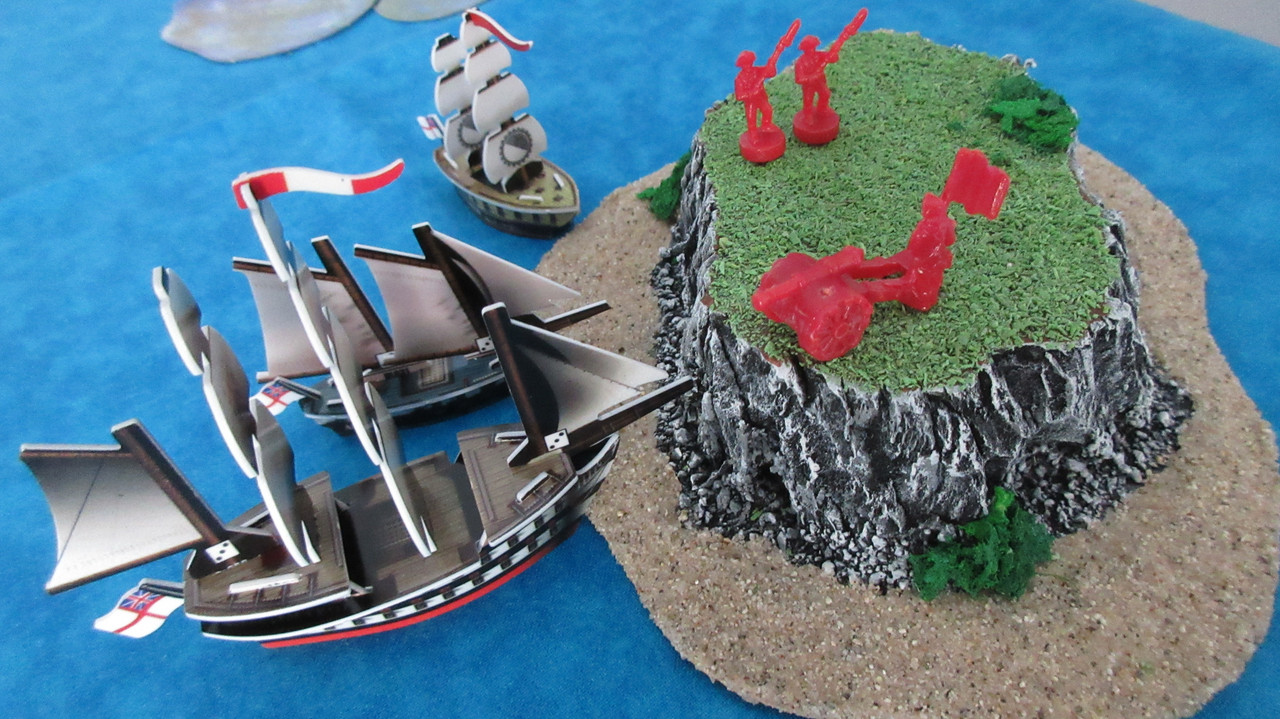 Wow!! Spanish patience pays off! They find a tropical paradise deep in the Caribbean, complete with a waterfall and trees! The Spanish name it Paradise Island. (note: this island is not connected with the Paradise Island scenario some of you may have seen before, and the name will not likely remain after this game) 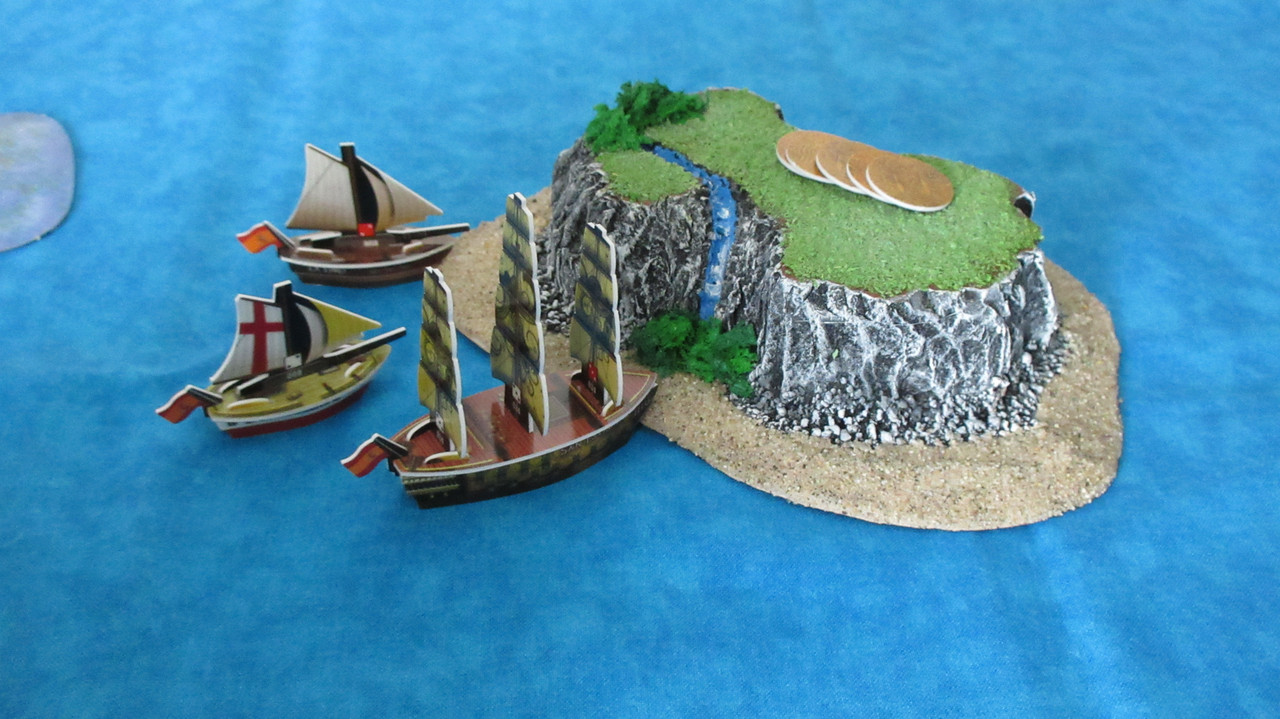 The current Spanish view of Diamond Rock, showing the imposing back area and the impressive height. 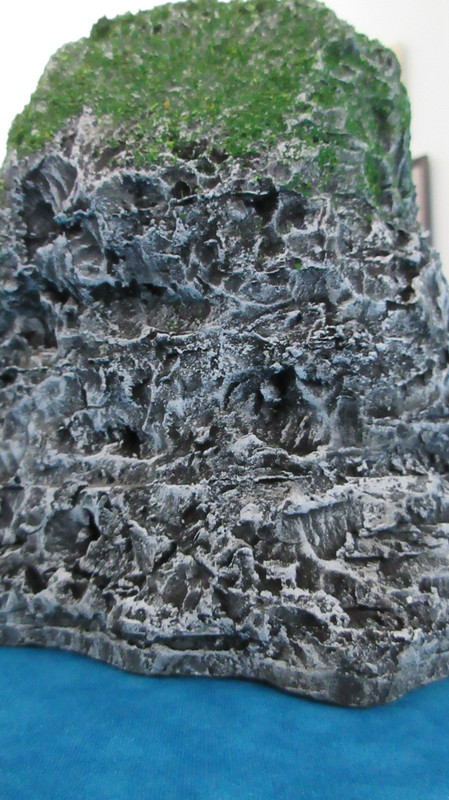 Paradise found? Perhaps, but the Spanish will have to spend some time exploring it to discover what the island has in store for them. 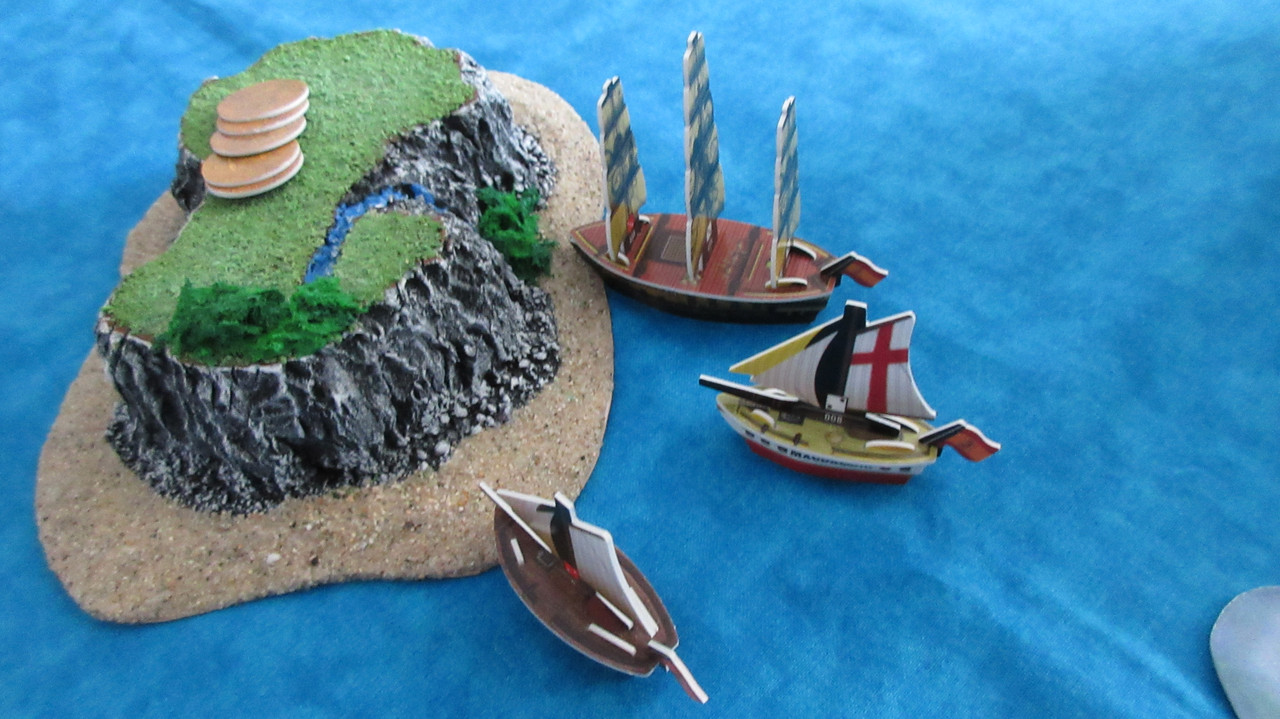 Finally we are back in the Sea of Karkuda! The French dock at nearly the same spots they started the game at, and cash in their fish/food/bananas for 24 gold! They spend it all on two basic things: Le Lyon, a 4 masted schooner with good speed and cargo space, and their first dock purchase! 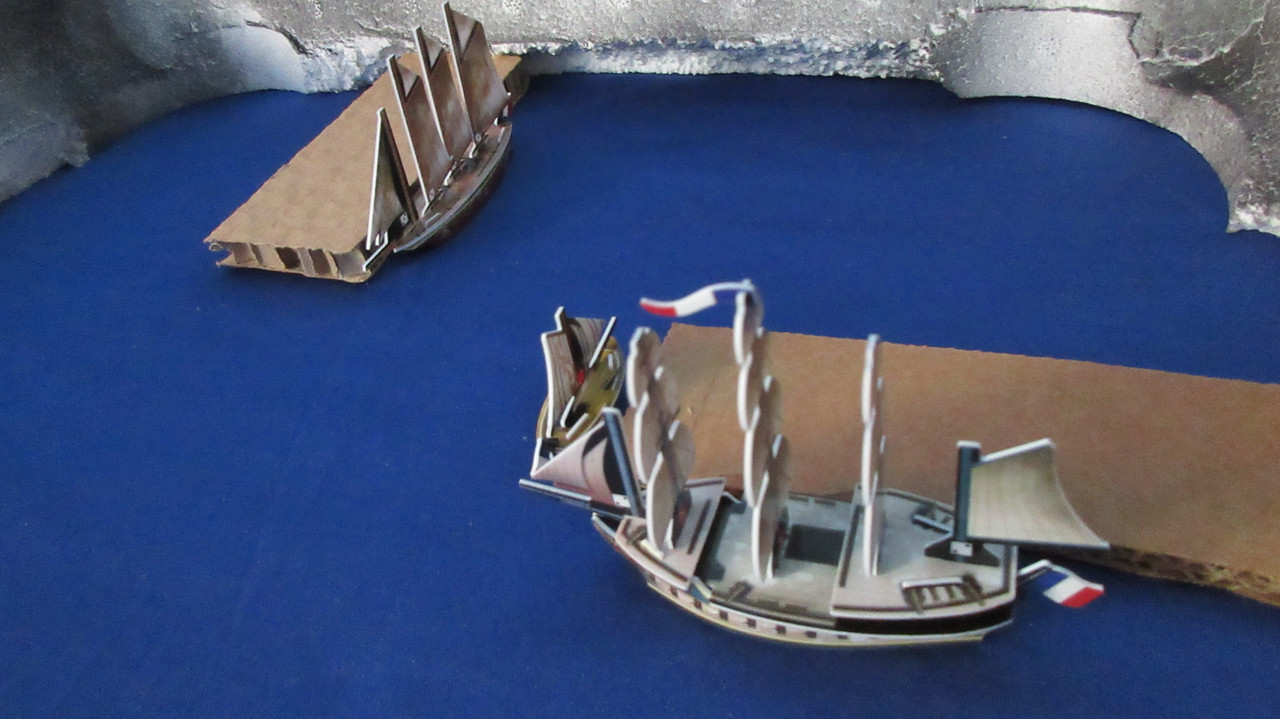 The French have much more room to expand, but are happy with their progress so far. 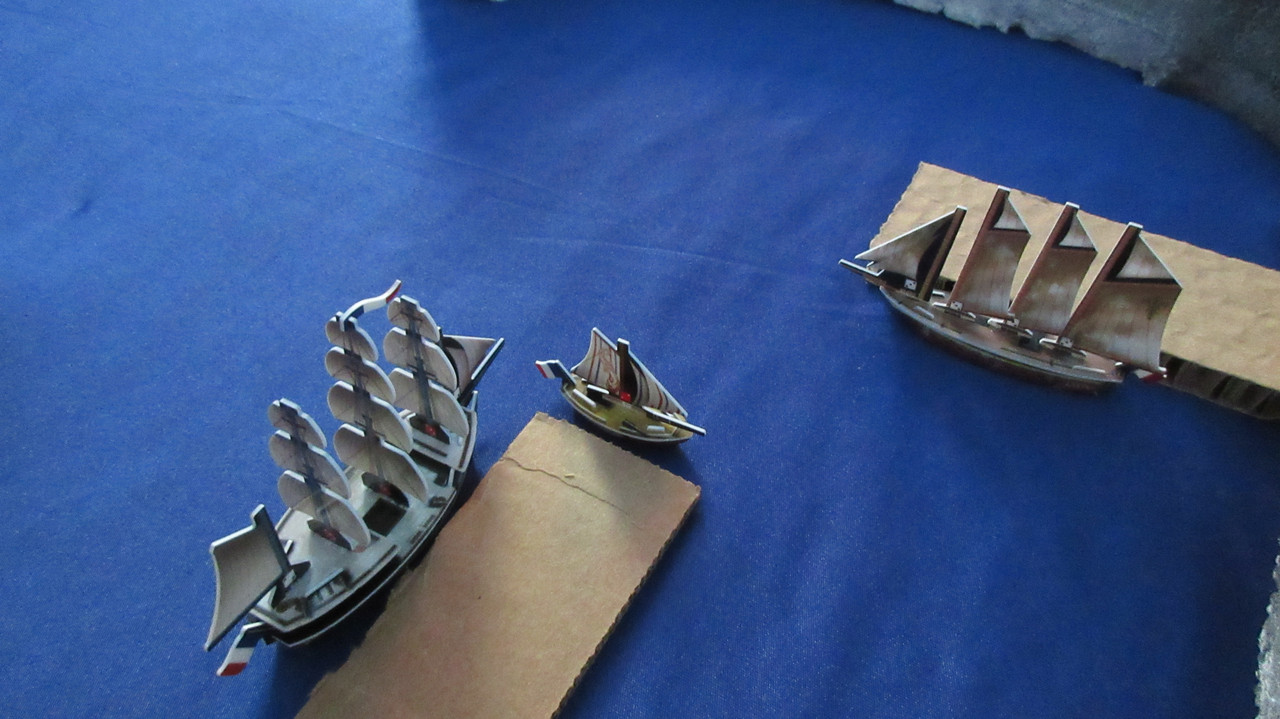 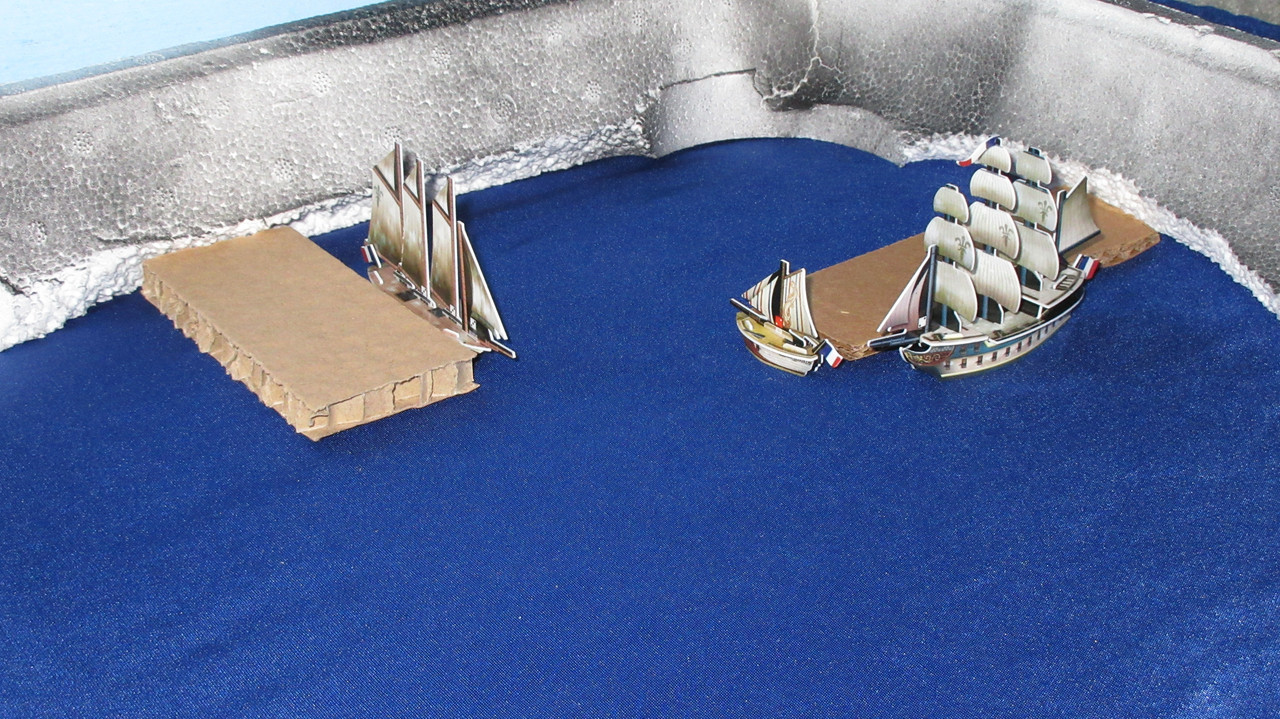 For now, we end with the Americans and their resource gathering. However, it won’t be long until more things happen. 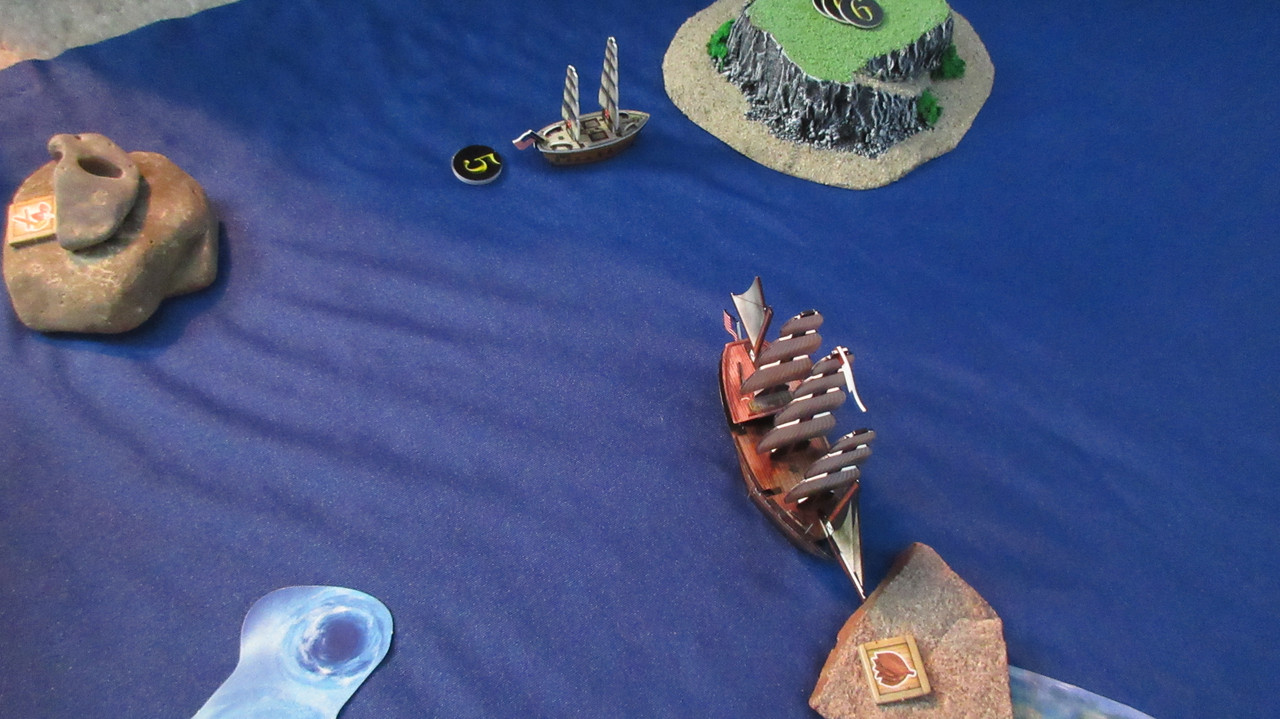