Due to a surprise resource change and some real-life logistics, I wasn’t able to finish all of Turn 56. However, what did happen was pretty interesting.

Previously shrouded in fog, the Americans and French didn’t even realize that their battle nearly bumped up against some huge unknown structure south of The Flat!! O_O 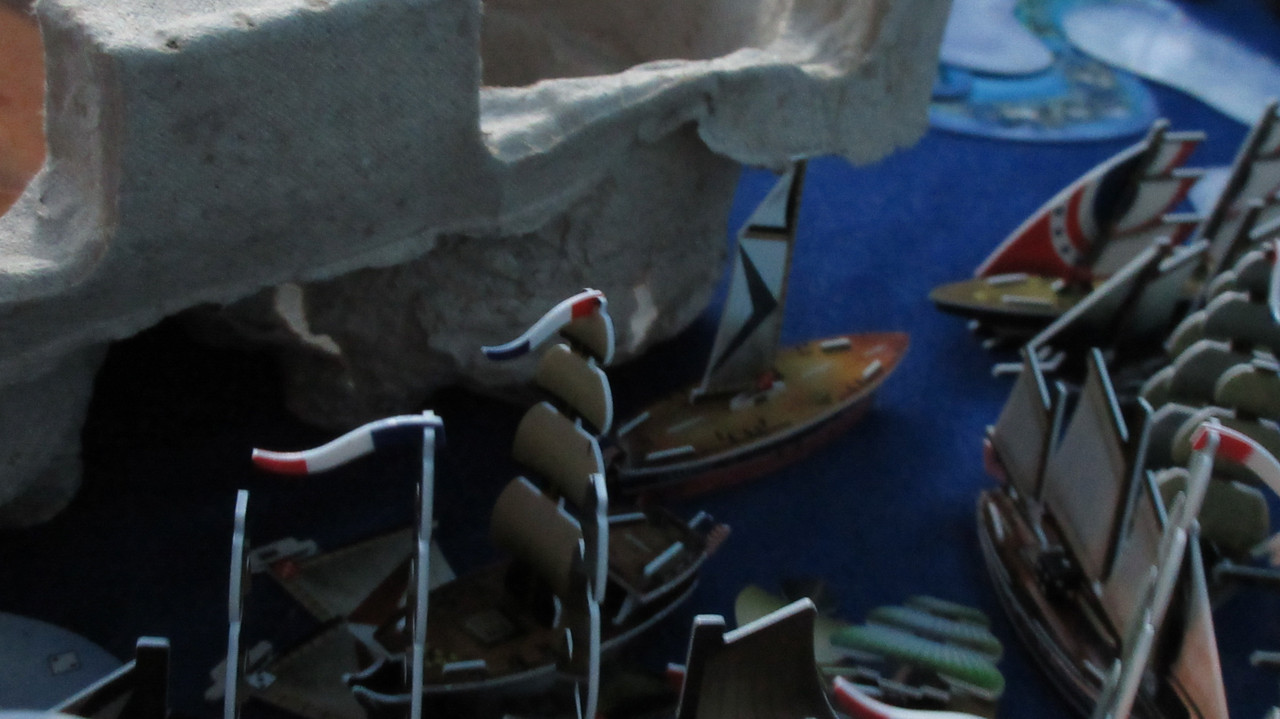 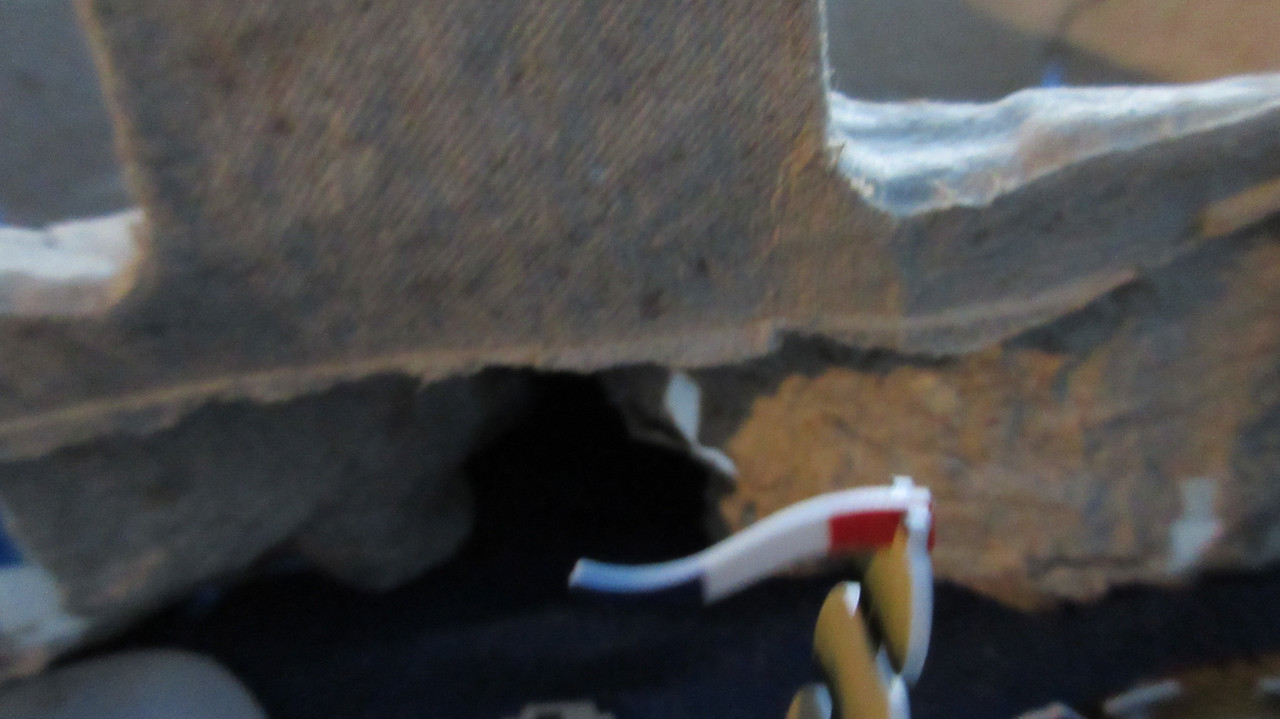 The Carolina and Jackson dock at the northwest end of The Flat that had been explored by the Peacock, and unload 6 army units!! The War for The Flat is on! This could be the first time in this game where we see true land warfare, though ships can easily pick them off. 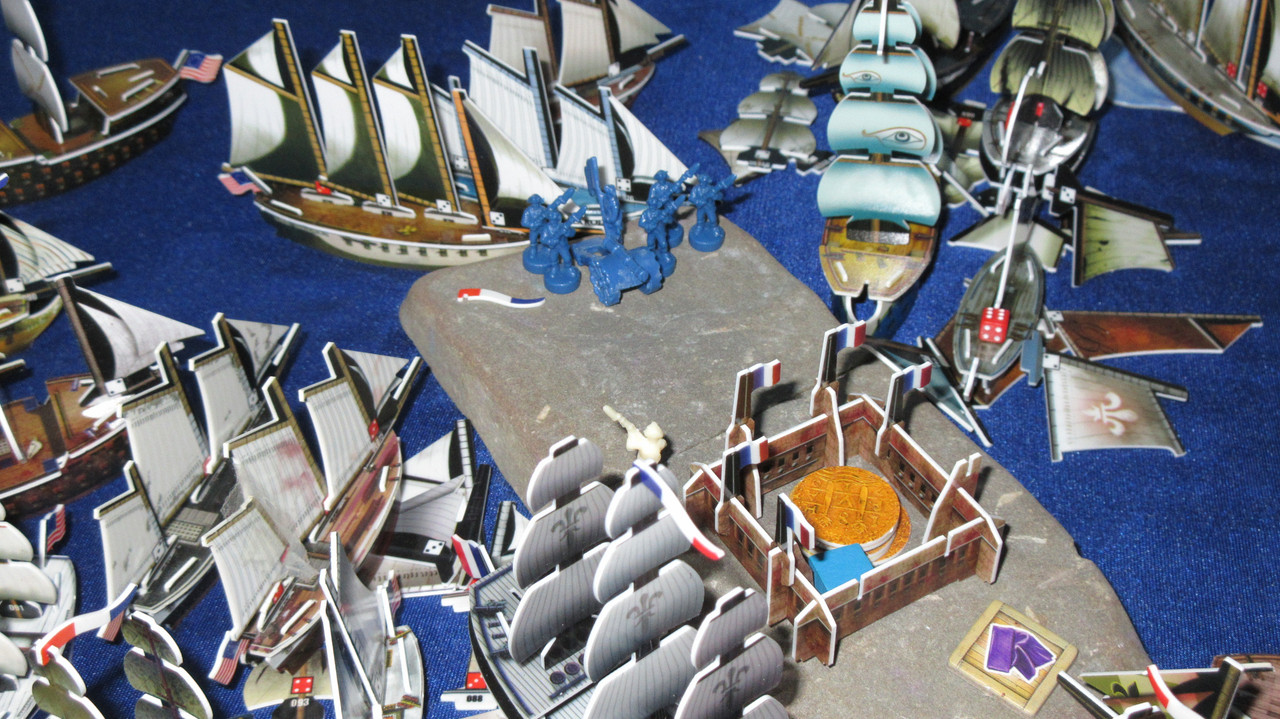 The Seattle hits 3/5 to smash the Felicite, while the Yankee and Franklin team up to set the Hercule aflame. 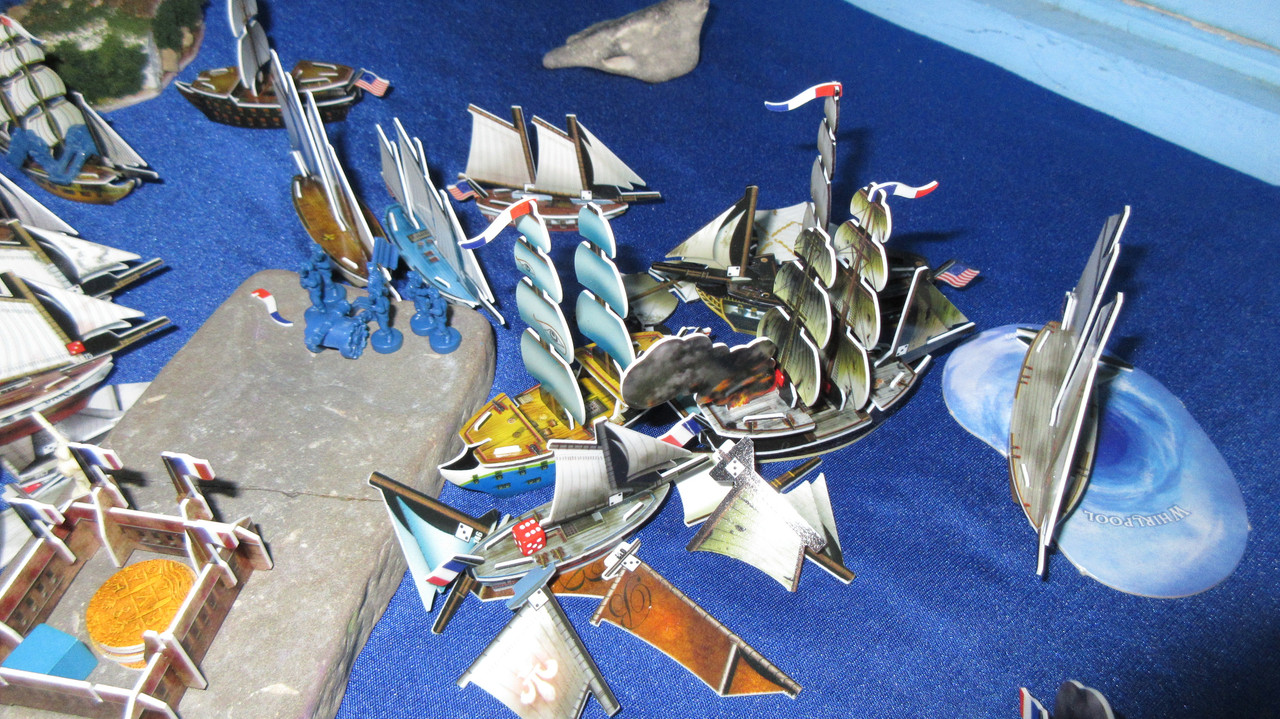 A rather poor American turn on this side. The ships south and west of The Flat cannot break the French line and are stuck behind each other.

However, the Americans cripple the Pirates in the southwest, and have all but won that battle! The Springfield’s ability came in quite handy, allowing the Minuteman flotilla to hit all 4 times against the Thirty Tyrants (at the far left). 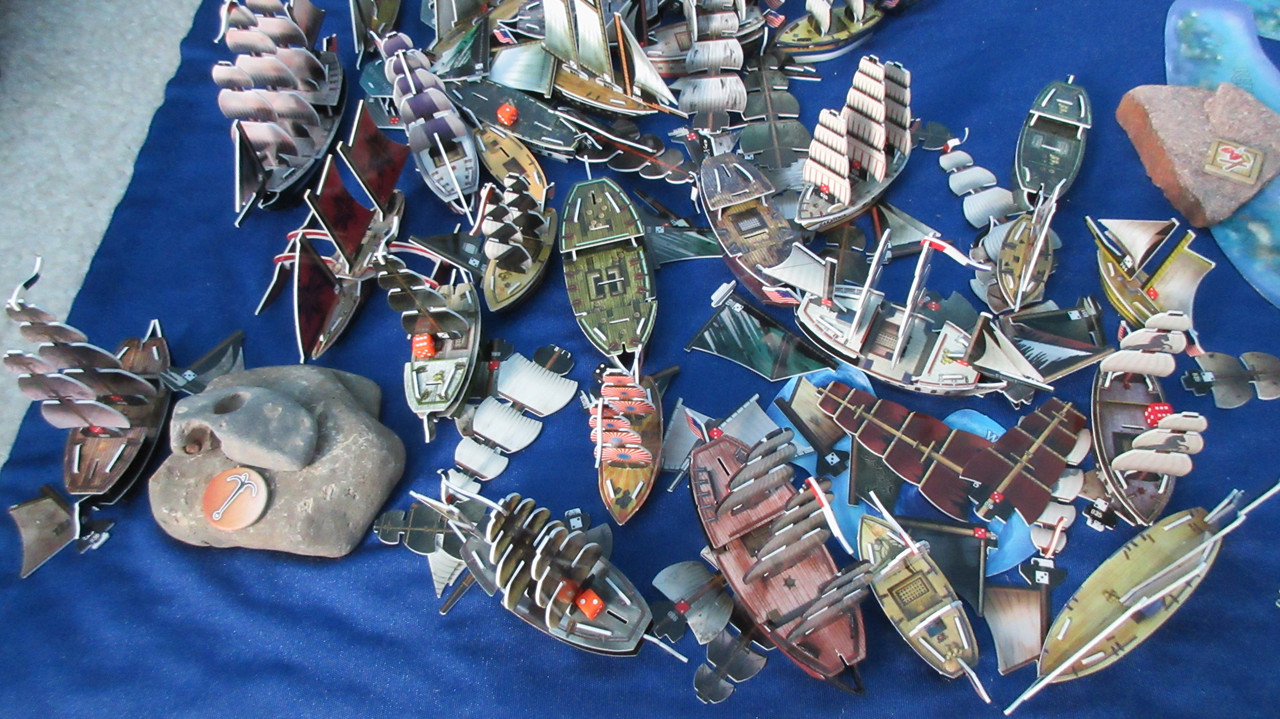 The Delight is dismasted, and the Americans capture no less than 4 ships on the turn! The Ballista, Bruja, Jape, and Centurion will join the American fleet if they are not scuttled. 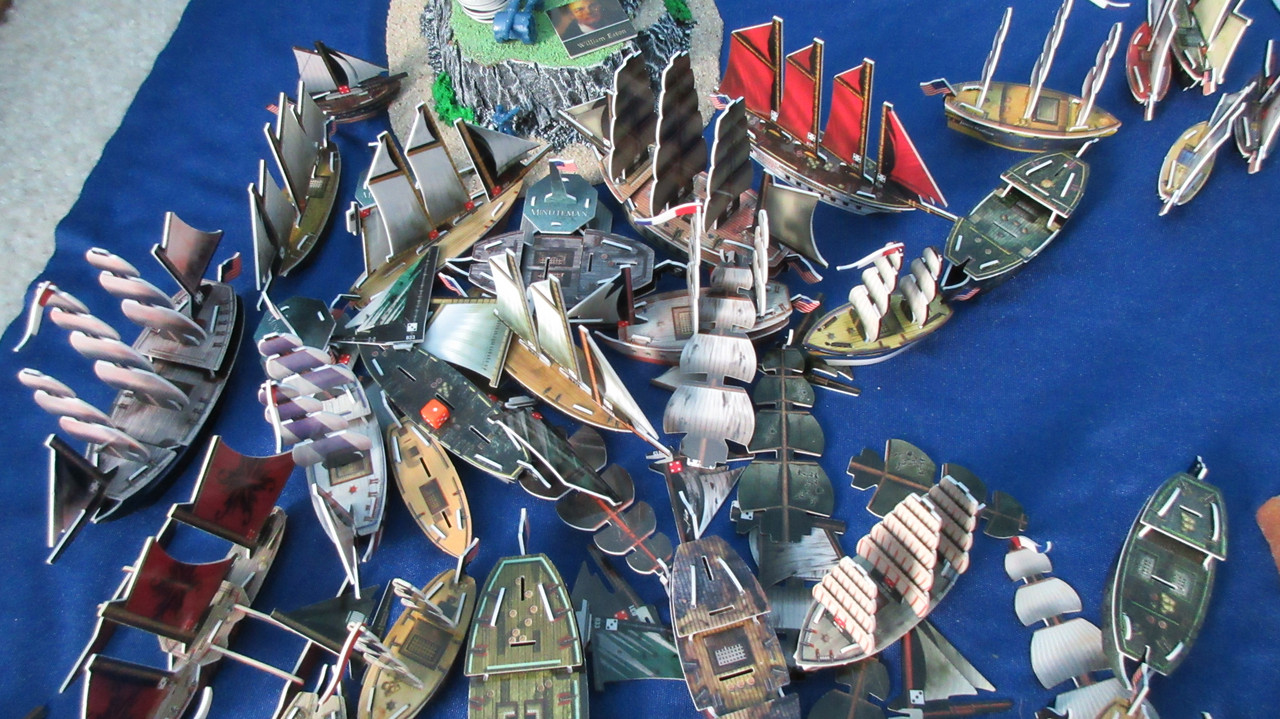 USS Appalachian reaches the whirlpool amid incredible amounts of wreckage: 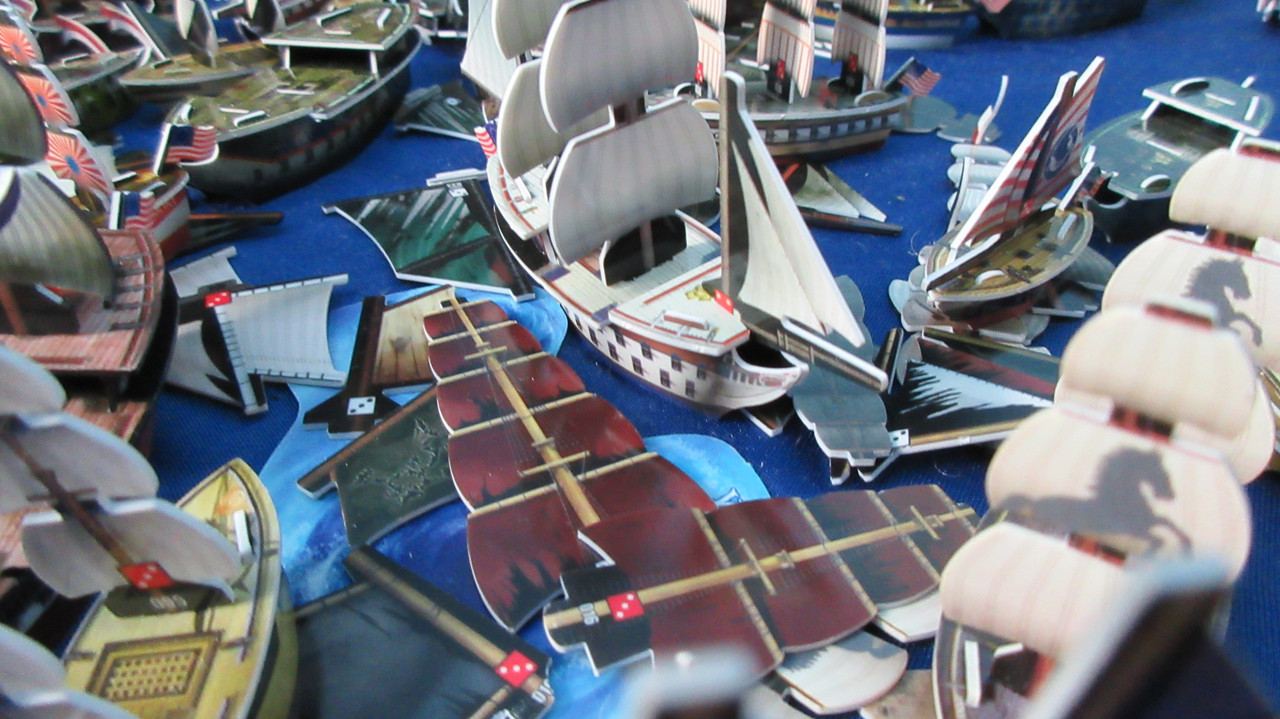 Looking up at the mass of ships beyond, though the battle has become quieter and less chaotic as Pirate ships strike their colors. 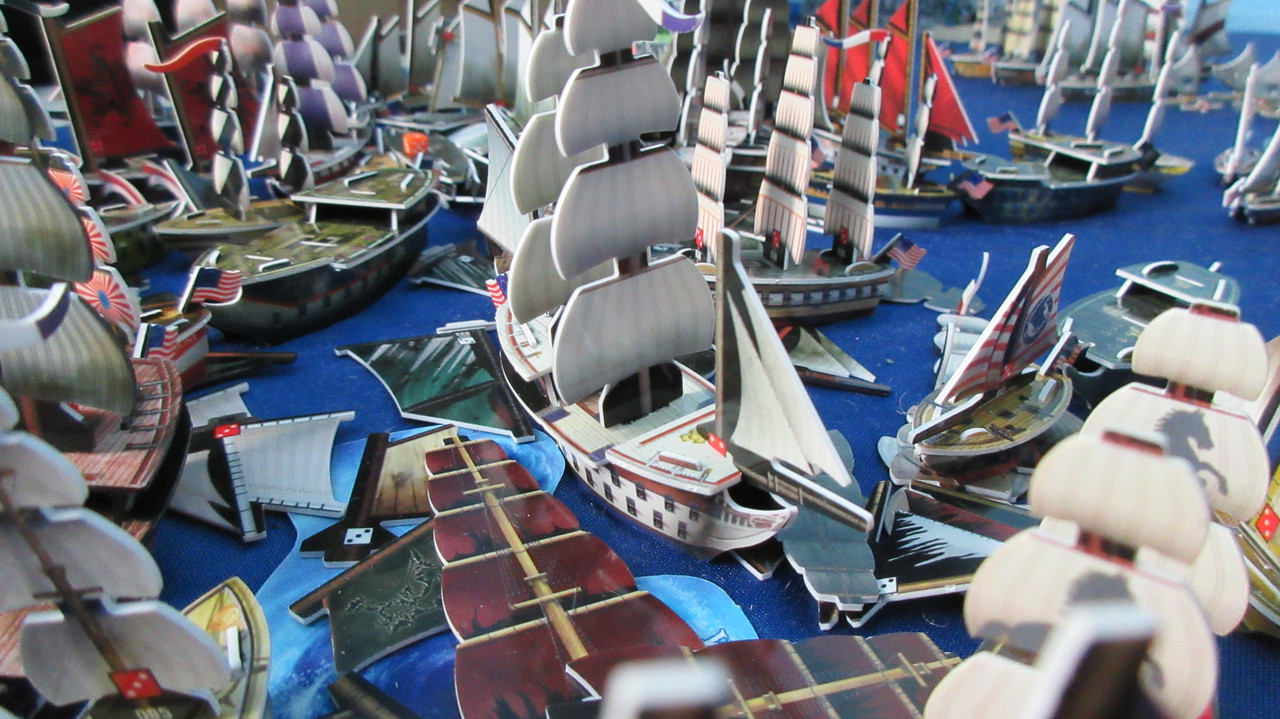 Various derelicts float about in the devastation, while at the top, the Concordia cannot even move away from the HI due to the busiest scene of the game so far. (and the RV Saratoga could hardly tow the Ballista, who is at a weird angle facing the President in this picture) 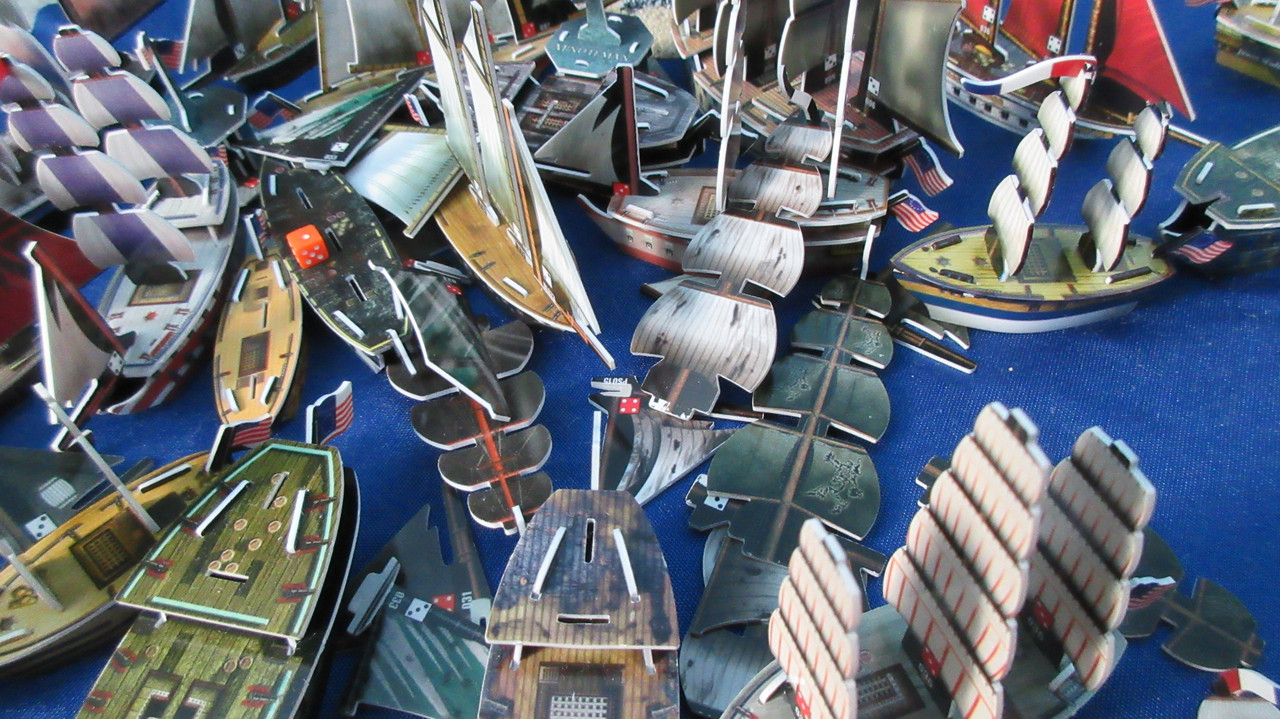 I rolled another one at the beginning of Turn 56, which meant a random resource change would occur! I rolled a 2 after, which meant the change would only affect this one turn. Then, I rolled another 2, which was the first time a 2 was rolled for resource values!! Suddenly lumber was worth 6 gold apiece, luxuries 5, and finally, spices were in the top half of values at 4 apiece! This benefited the Cursed, French, and Americans the most with their luxury stockpiles, which is part of the reason I couldn’t finish the turn. 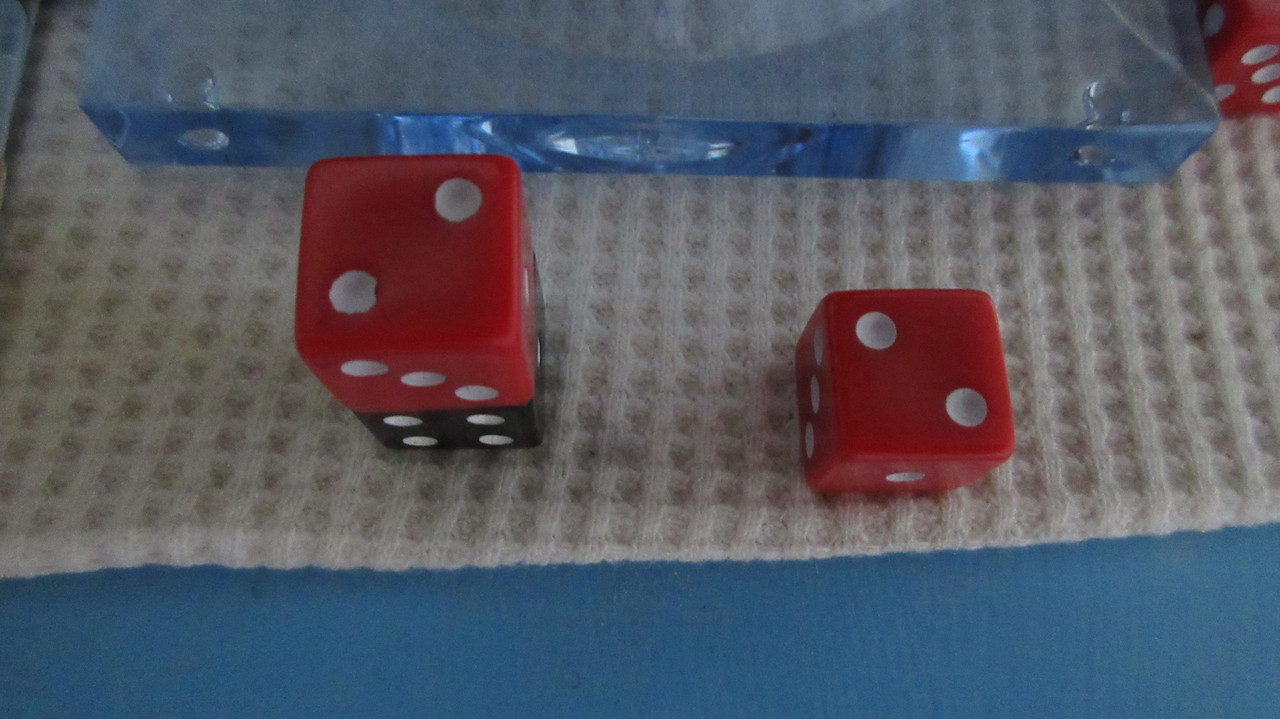 The Pirates come around the huge fog banks surrounding the Tunnel and discover the Jade Rebellion!! O_O 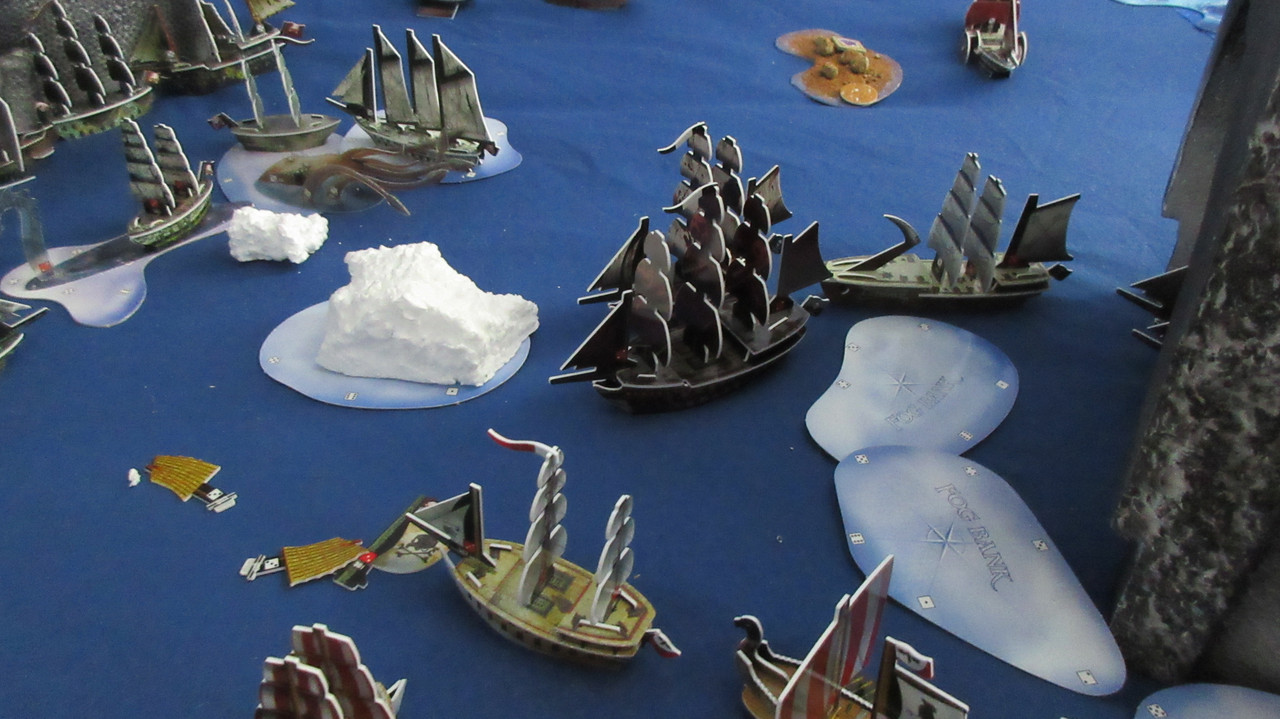 Words and not shots are exchanged!! Calico Cat has a shouted conversation with the captain of the Wiglaf, who hates the Cursed lol. The captain tells Calico Cat that the Cursed are a horrible menace of unspeakable power and hatred, and that the Jades would like an ally with which to combat them. Calico responds that the Pirates are merely humble explorers (lol, not that the Jades bought that, as the Pirate squadron contains 3 of their best gunships XD) and will not be able to assist anyone in war efforts. The captain of the Wiglaf is disappointed to hear this, and will pass it on to his superiors in the rapidly approaching Grand Temple. However, the Jades are hell-bent on eliminating the Cursed presence from the Sea of Allost, and between recent launches and repairs, think they will be able to do that before too long. 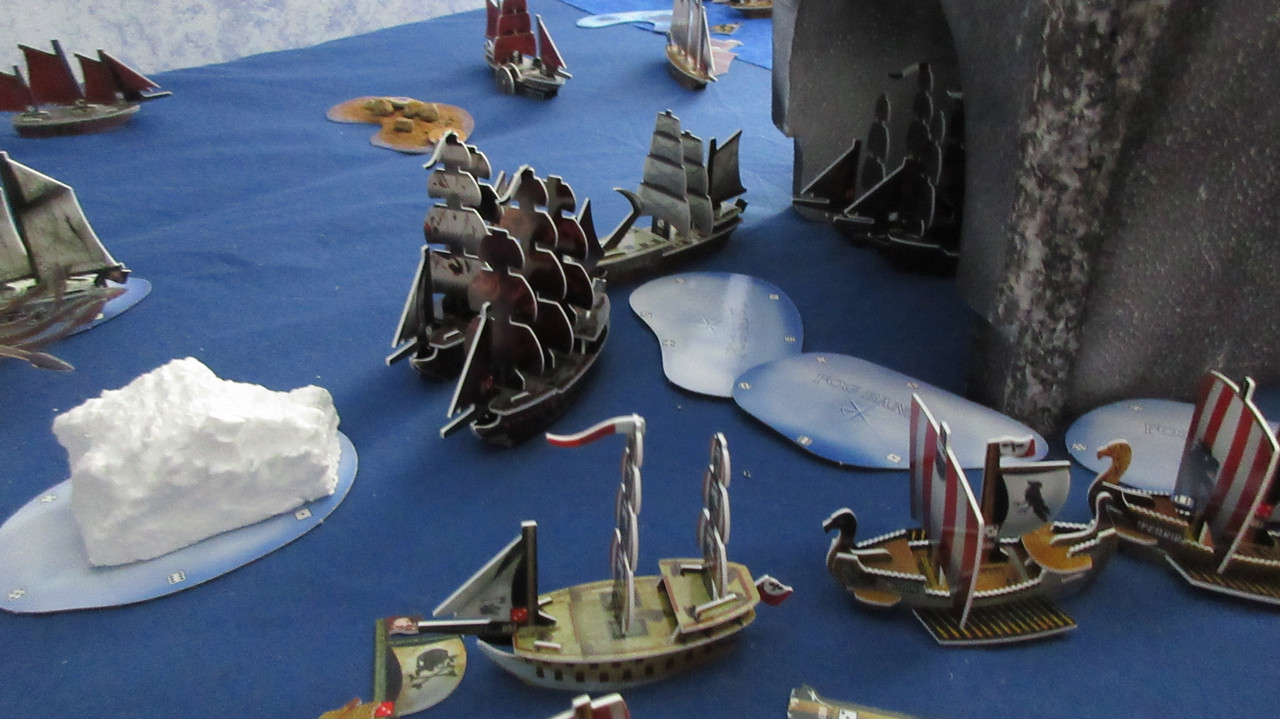 The Pirates had just gotten word of the Cursed, but in the meantime they also had a first-hand experience with them! The captain of the Golden Medusa had been growing bored for quite some time with whirlpool patrol, and after being egged on by his Pirate comrades on the HI-raiding ships, decided to have a look west of the whirlpool. The Pirates quickly sighted a strange vessel anchored off an island, and lo and behold it was the Cursed!! The Soul Crusher has been guarding that island for quite a while now. Wraith quickly started gesturing at the Golden Medusa, hissing like mad! Not understanding a “word” of it, the captain of the Golden Medusa deduced that all of his crewmen would be killed if they went further or tried to find out what was on the island. His intuition was correct! XD 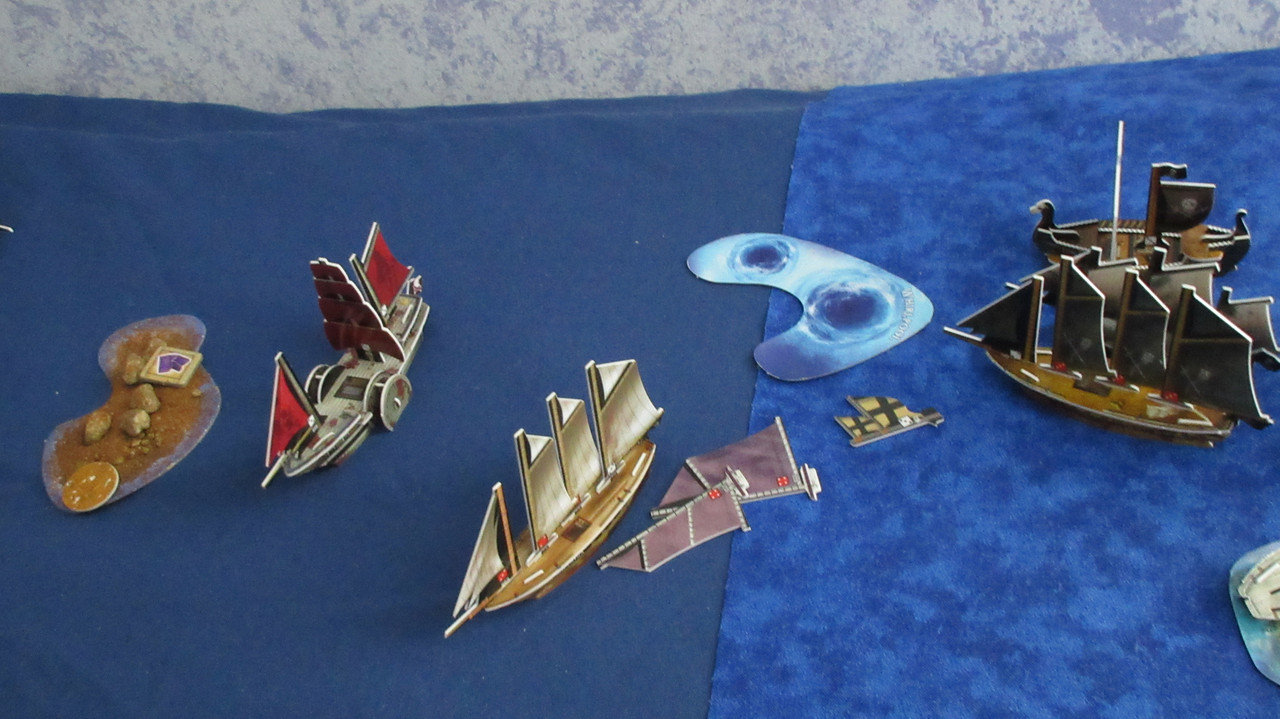 Now you can finally understand the general layout in the Sea of Allost, but to think that is the end of developments there would be VERY wrong… hhehe.

At the end of their turn, the Pirates spend 32 gold on what I think is a potentially clever combo with Jonah. Usually I just put Blackbeard and a helmsman on Blackbeard’s linked ship, the Queen Anne’s Revenge (QAR), since that maxes out the ship’s point limit but still leaves room for gold. However, with so many points available and a great resource system already in play, the Pirates went overboard and used Jonah to bring aboard Sean Cannonball Gallows and Lady Baptiste to give the QAR EA with reroll abilities. This could make the ship quite dangerous and capable of nabbing more than one crew in a turn. 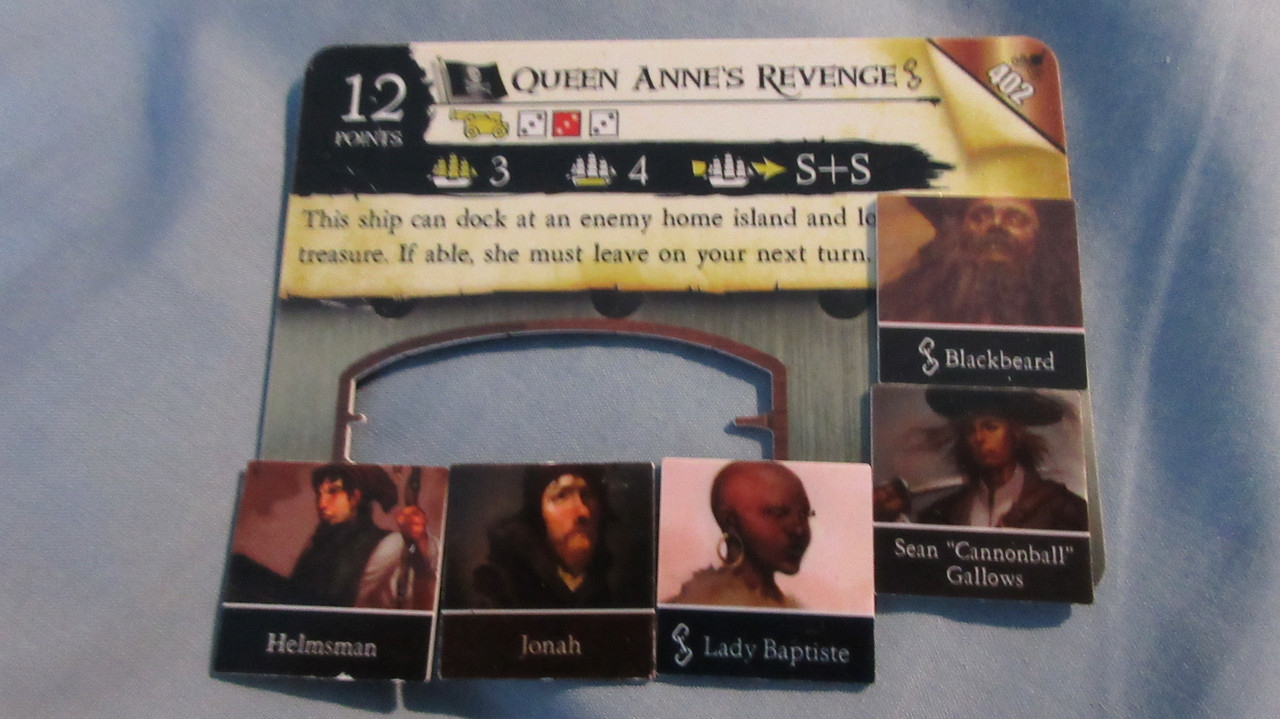 The QAR was launched at Dead Man’s Point, where three Pirate ships repair from their awful trip to the Sea of Karkuda. The nice blue hull of the Lady’s Scorn is visible at the top, nearly blending into the ocean. At the left, the Gruesome looks to join the HI raider ships anchored off the whirlpool. 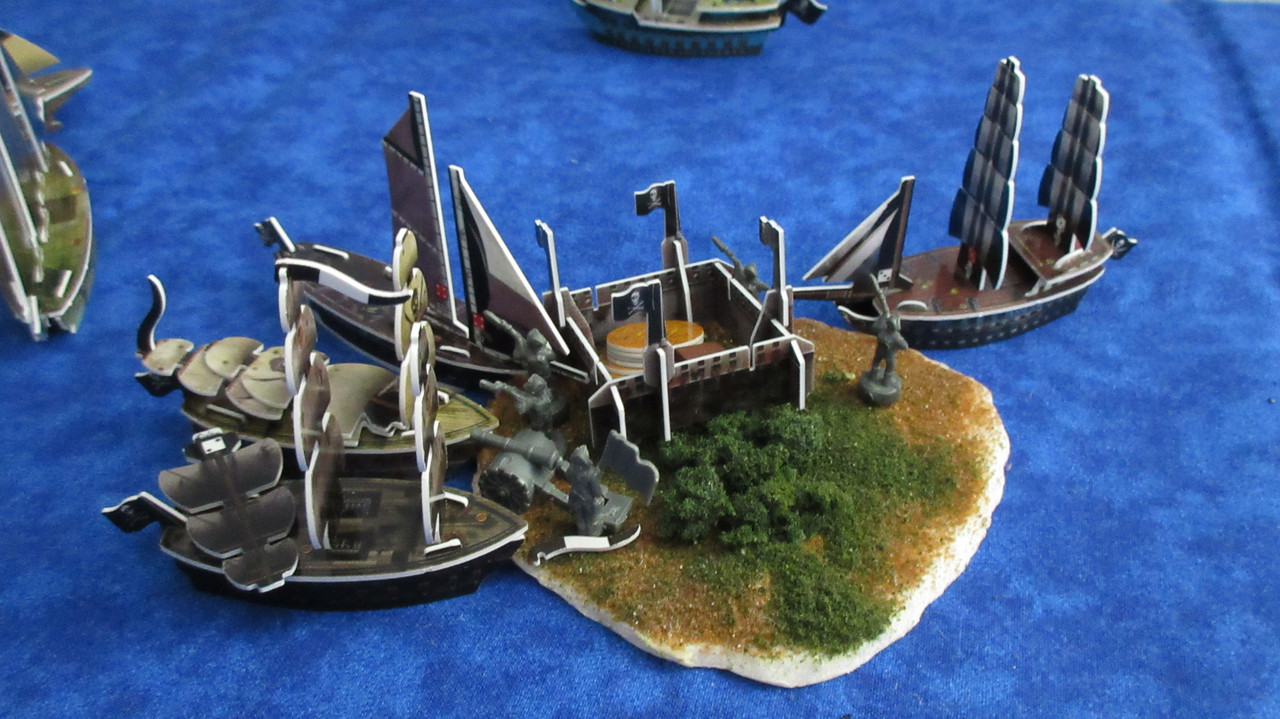 Bartholomew Roberts enters the Tunnel! In addition, the Deliverance has finished repairing, which means that the Pirate whirlpool squadron is ready to go again! However, Havana Black might be “hungry” for more oarsmen, in which case he might leave the squadron to go home first. In between those two developments you can see the considerable Pirate defense squadron, which now consists of 11 2 masted gunships and two flotillas. 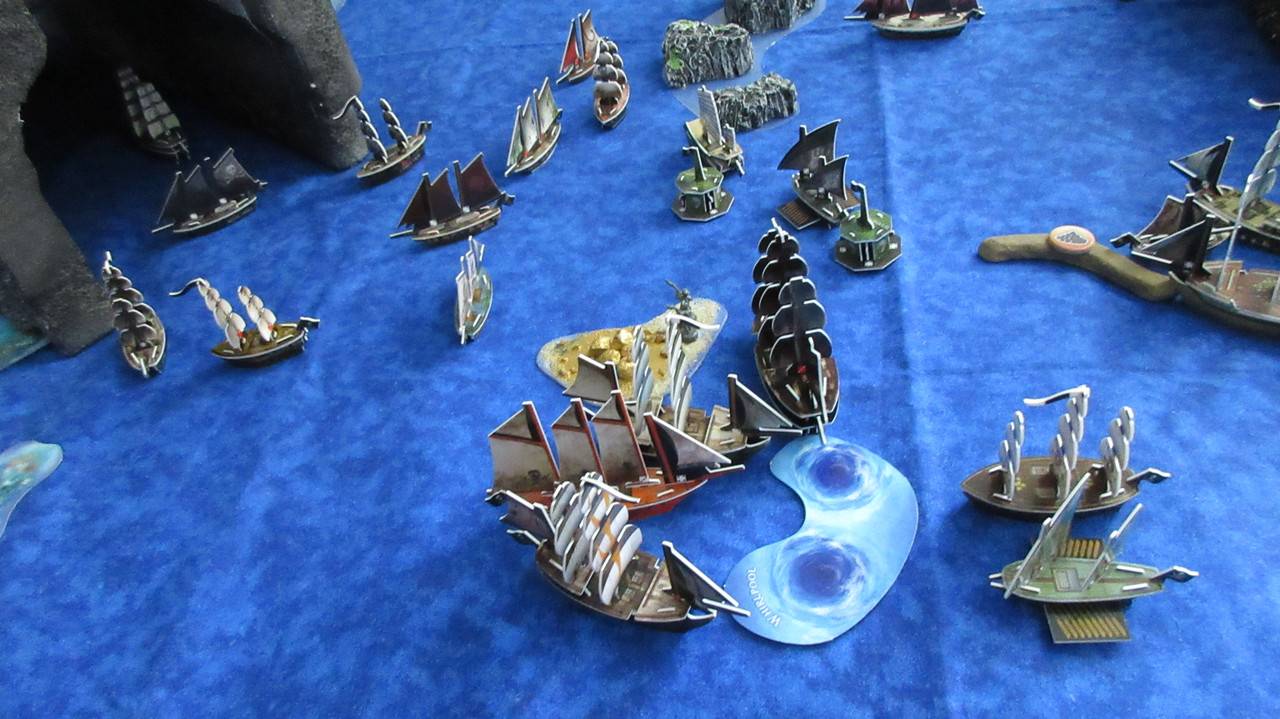 The Jades are gearing up for yet another battle with the Cursed! With Calico Cat not offering Pirate help, the Vikings on the outside line have dismissed the Pirates to a degree, ignoring them in favor of fleet maneuvers. The Jade squadron will only grow stronger as more and more ships finish repairing. 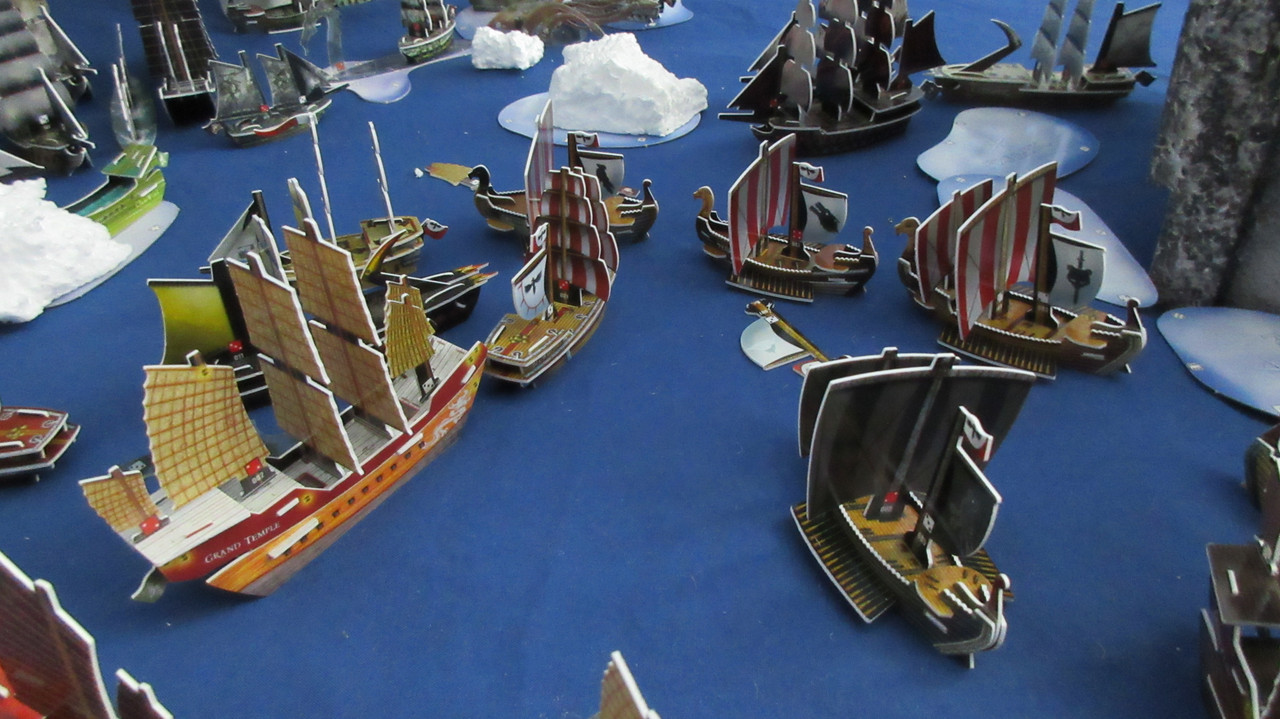 But the Cursed grow stronger as well! They cash in less than half of their luxuries for 80 gold, which nets them the Juggernaut, Whydah, Strix, and Fiddler’s Green (with F&S L-mover Tabitha McWarren aboard). 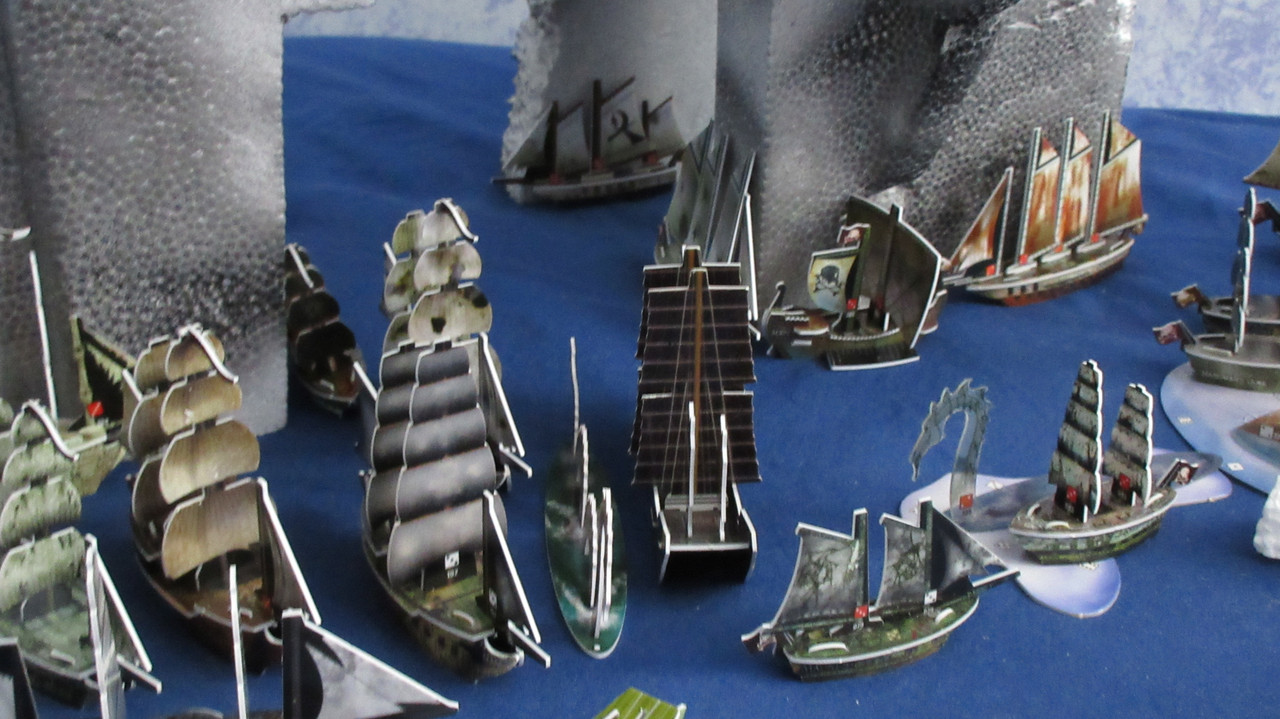 Back in the Caribbean, the Lord Algernon fires somewhat of a cheap shot at the Voz de Dios, setting her alight and dooming the Spaniard. The Orkney begins towing the dismasted Corazon del Mar, while the repaired Durham is returning to the war effort. At the bottom you can also see the hull of the Extremadura, a ship the English are lucky to bring back home. 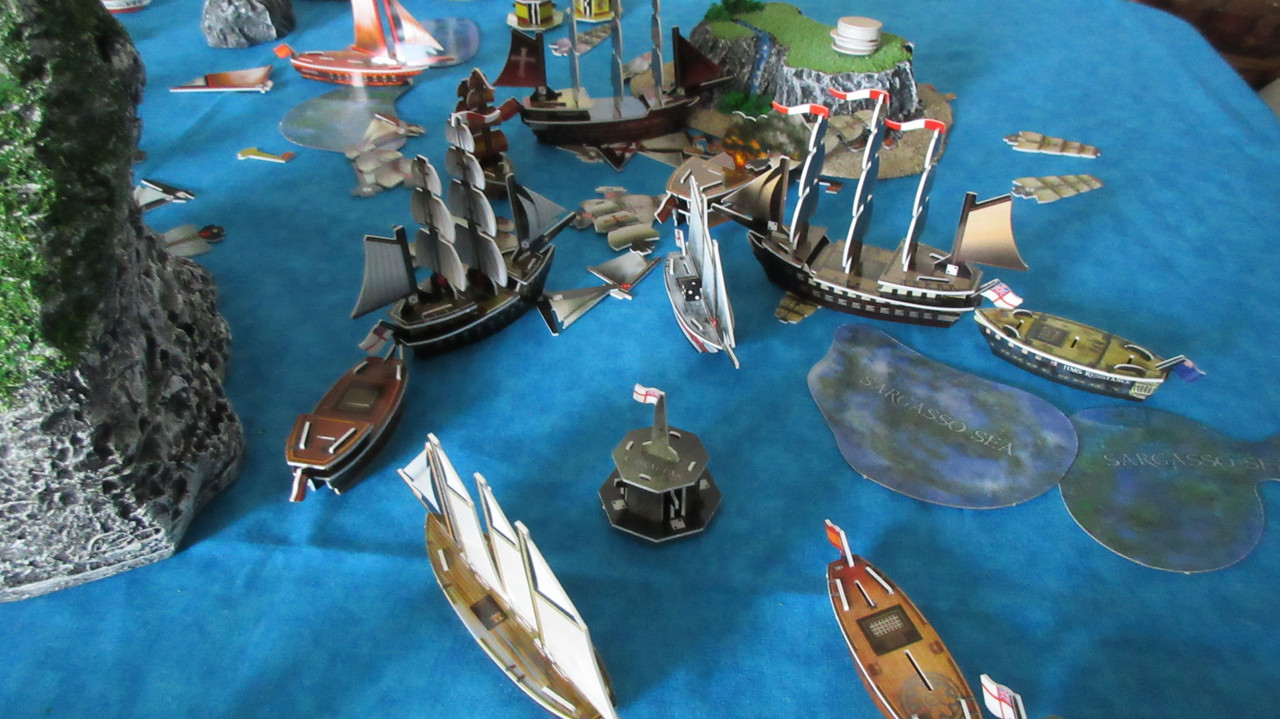 But in a big surprise move, the Spanish open up another theater of the war!! Attacking the much-diminished English presence southwest of Diamond Rock, the newest Spanish warships veer to starboard and open fire! The Serpiente hits 2/2 to take a mast off the Burma. The Ebro only hit 1/4, but the Acorazado bailed out her fleetmate by going 3/5 (with double shot, the last cannon wasn’t in range) to damage the Duke of York. 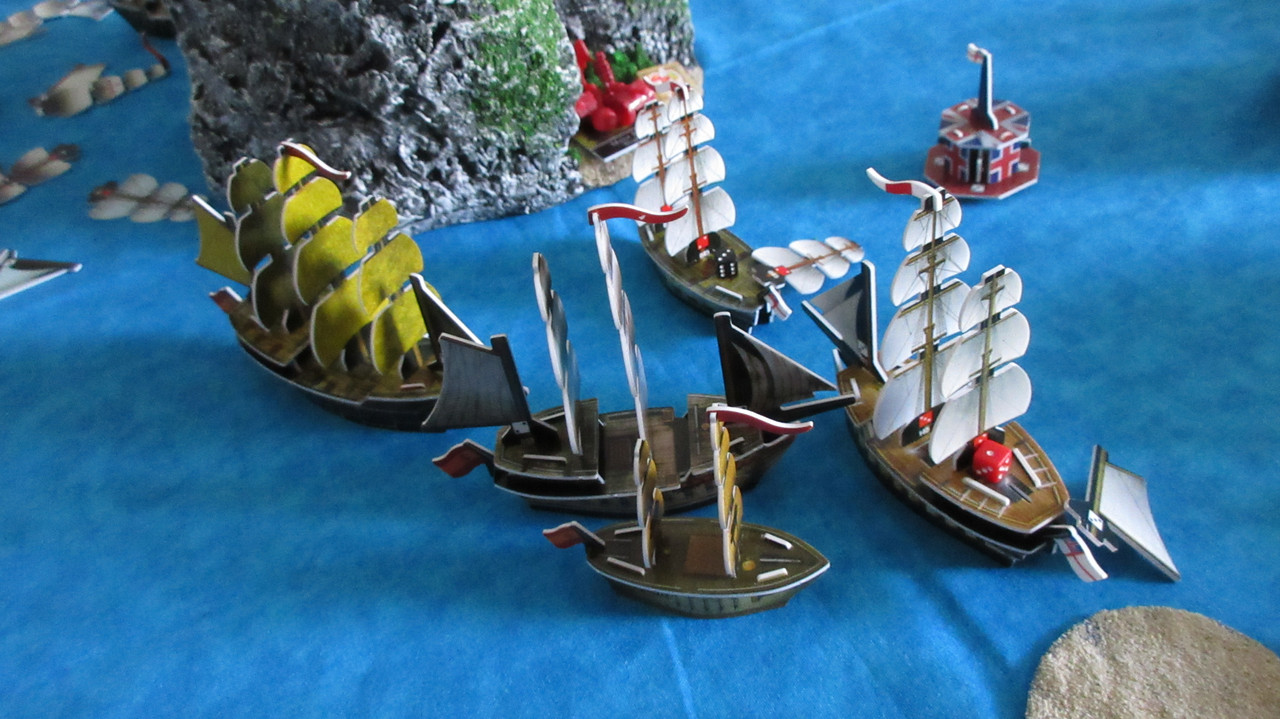 With the Santa Catalina, Profeta, Asesino, and Habana all coming over from the HI to help, the Spanish suddenly have a pretty solid presence where the First Battle of Diamond Rock took place. The English were caught unawares, and although they have two more gunships and the Tower flotilla nearby, look to be at a disadvantage. 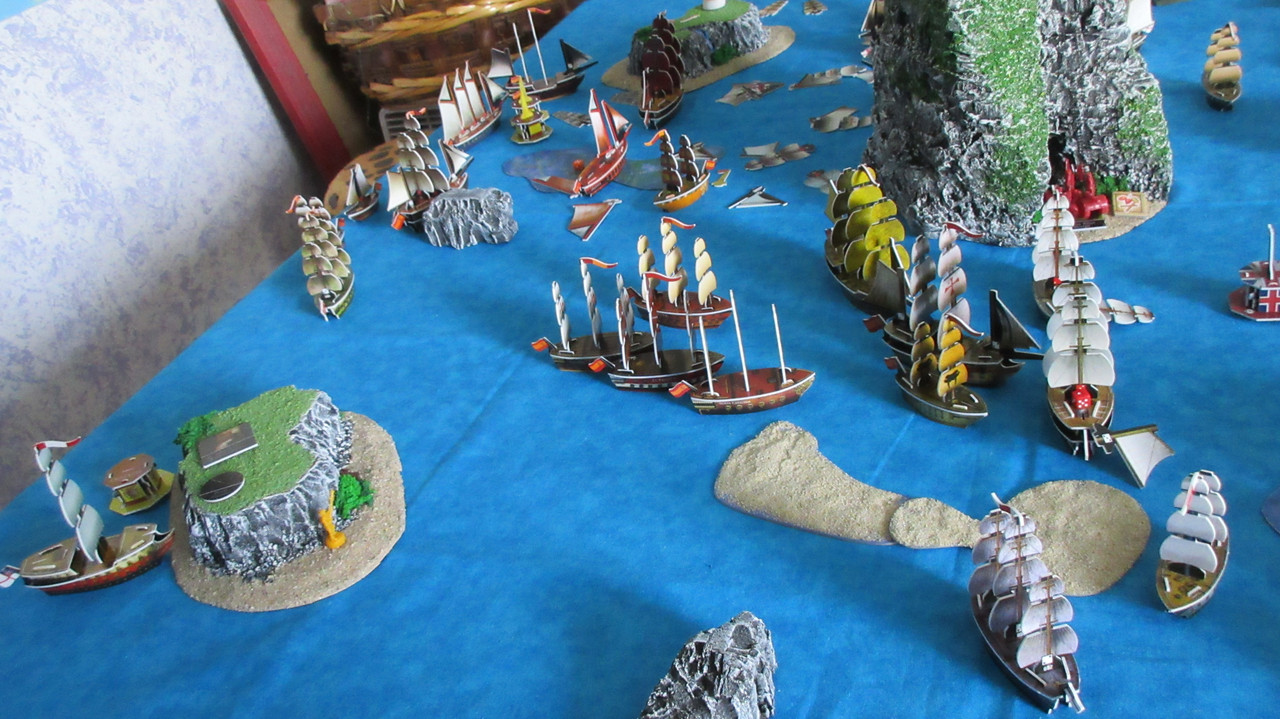 Up north, the First Battle of Paradise Island is pretty much completely over. It was inconclusive but with notable losses and victories on both sides. Similar to the JR-Cursed war, this war is beginning to resemble two factions beating the carp out of each other with little gains. XD The Cristal del Obispo explored the island, finding textiles! The Granada is still stuck, while the Santa Ana has returned to the scene as the Spanish don’t want to lose control of the island despite starting a new battle off to the south. The Spanish hope to distract the English and win a battle near Diamond Rock, simultaneously weakening English control of the central area of the Caribbean and buying time to get another fort on Paradise Island. It seems like a good strategy, between the English being battle-weary and not getting great returns on their spices for at least a few more turns. (worth 4 on this turn but the English want to wait until they’re worth 5 or 6 to cash in) 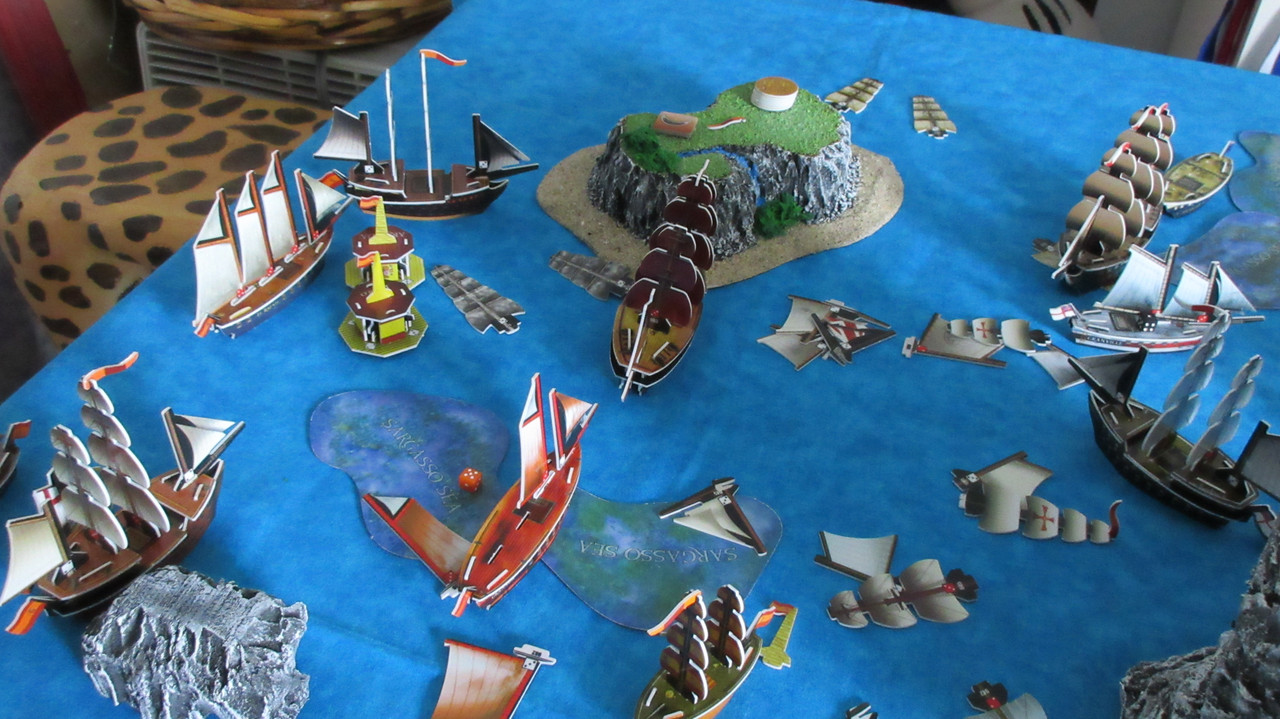 Back in the Sea of Karkuda, you can just see the tail ends of the Mobilis and Devil Ray entering the sub hideout! 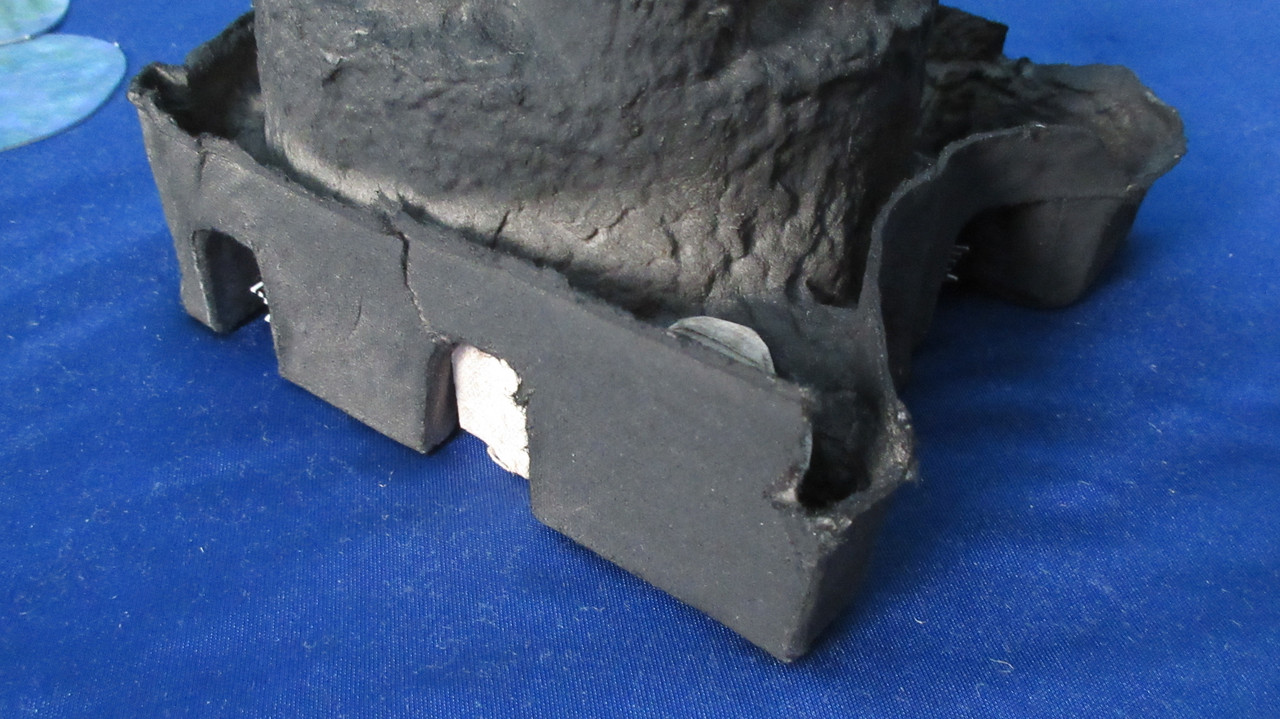 This is what it looks like once they’ve surfaced inside, but the Mercs will have to wait at least one turn to cash in their new resources since food and textiles crashed with the random change. 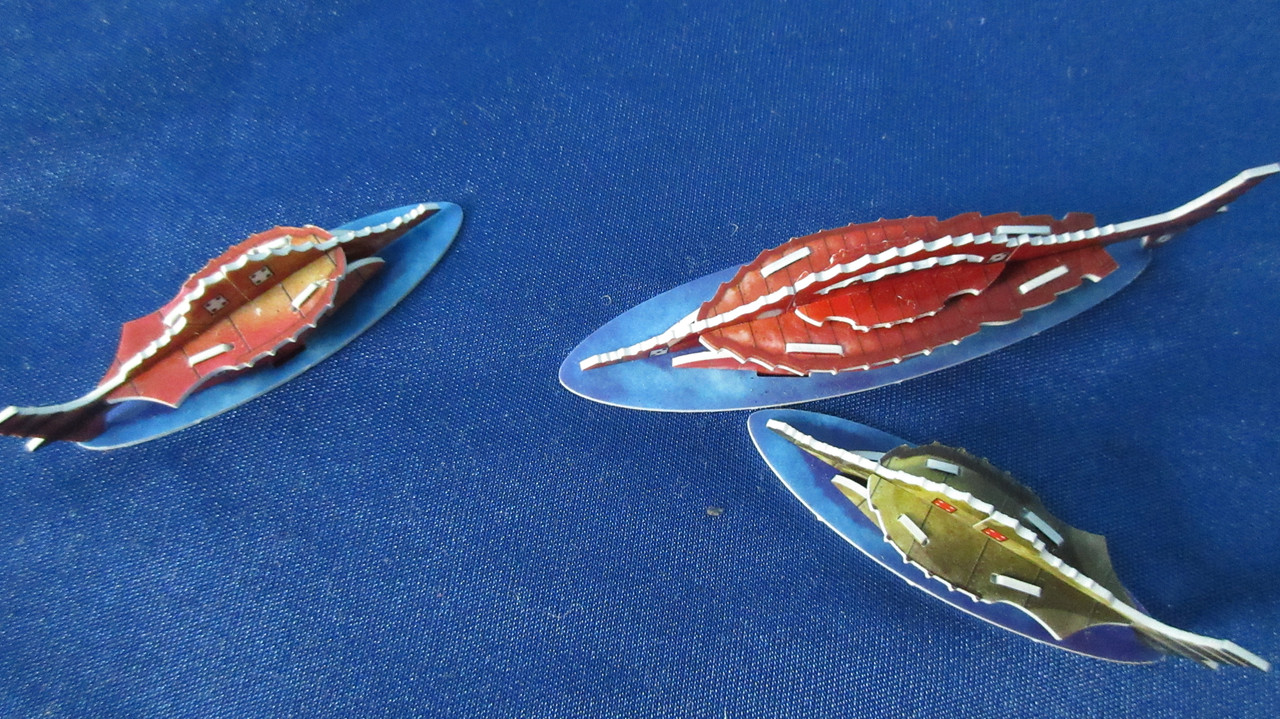 That is all for now! With luxuries becoming valuable, the French and Americans will both have a LOT of stuff to do on their turns, between the large battles, various logistics, and definitely some launches. I hope to play out those mammoth turns tomorrow! The point count has obviously been delayed even further, but it will be coming eventually haha.