Here are the American and French turns of Turn 56.

The French utterly dominate the Americans at The Flat! 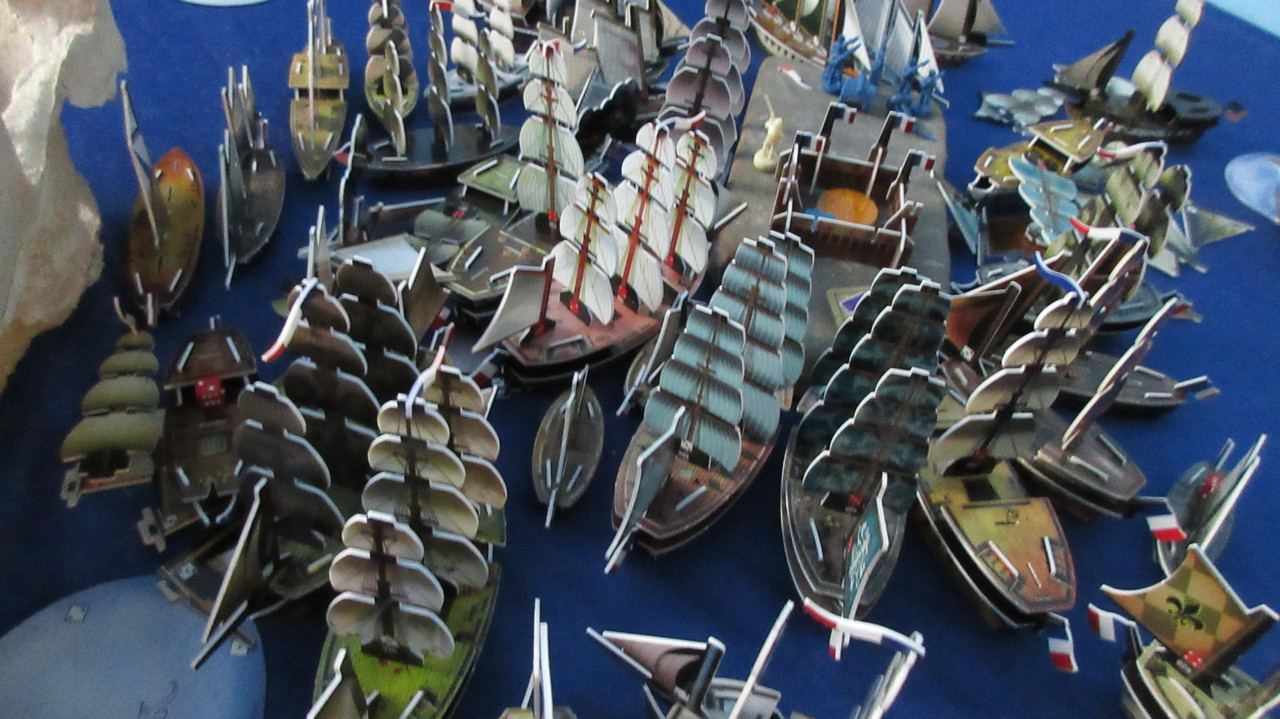 The Cleveland, Saratoga, and Delaware are finished, while the Minuteman has one mast left but is burning. The Dauphin Royal got an AA from Gaston to shoot twice, using Lenoir to cancel the L-immunity of the Jarvis. 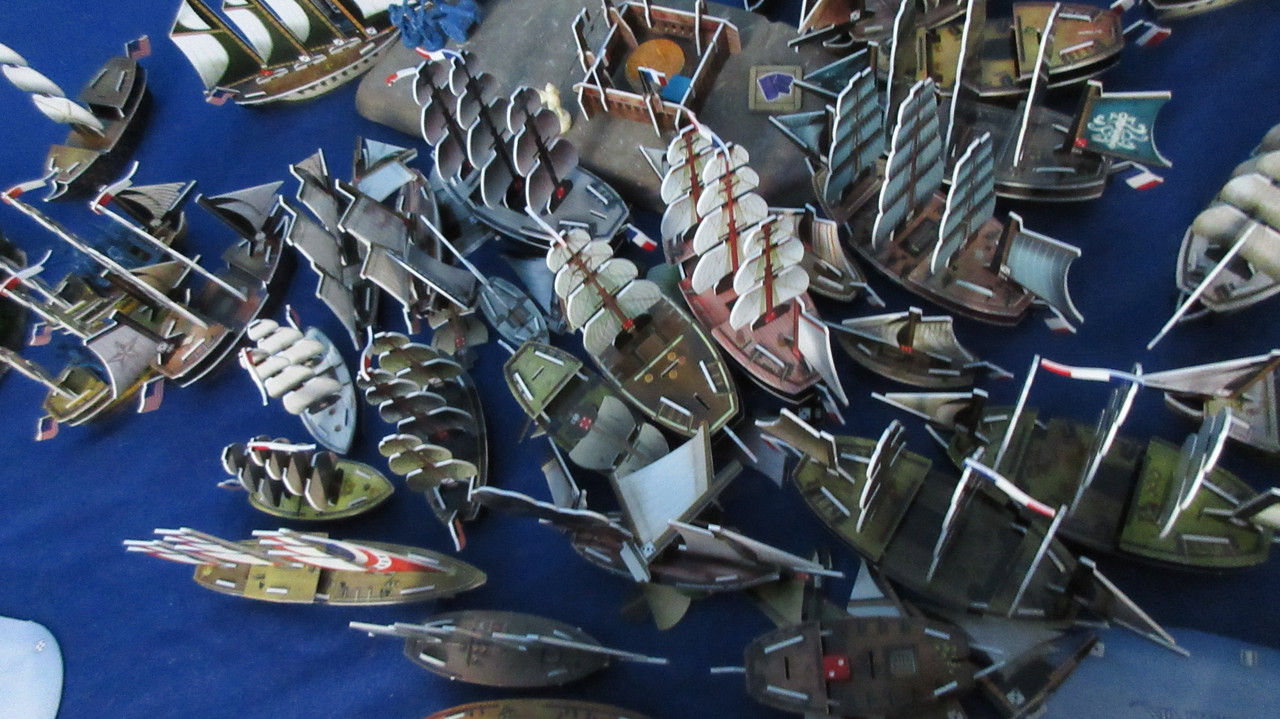 Paradis was very ineffective, but one shot hit to take out an American infantry unit, the first land-to-land combat of this game. The Hercule and Bonaparte join the Delacroix in extinguishing their flames at the fort, with the Hercule also dismasting the Seattle. 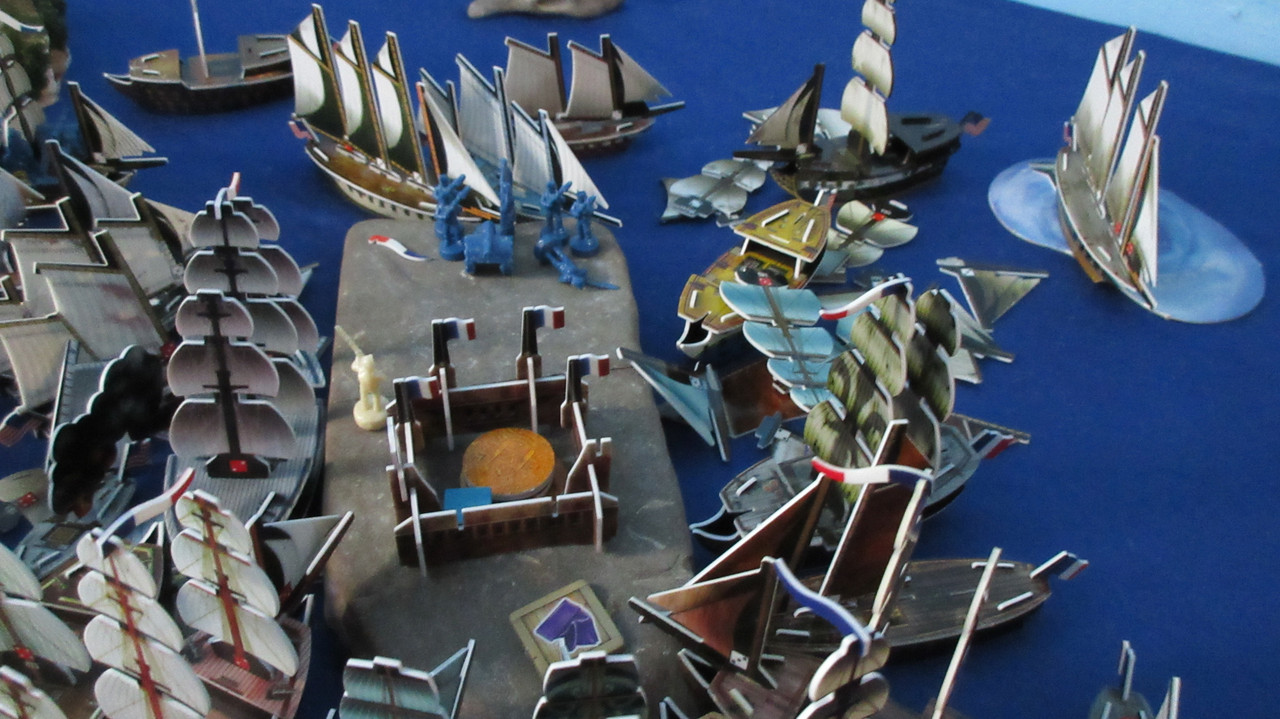 From the previous pictures you may have noticed a few new ships at The Flat! That’s right, the French were saving gold in order to launch from their newly upgraded fort! However, between the battle, the Americans having staked out the northern end of the island, and the handful of ships docking at The Flat for repairs, they only had room to launch two ships there this first time. However, those two ships are two more French capital ships – the 5 masters Neptune and Monaque.

Now we see the extent of the French spending spree – they didn’t come close to spending all of their gold, but they still spent a bunch! The Aube, Tepant, Epee, Orient, Aquilon, Cleopatre, Heros and Atalante come into play, all with fighting crew aboard. 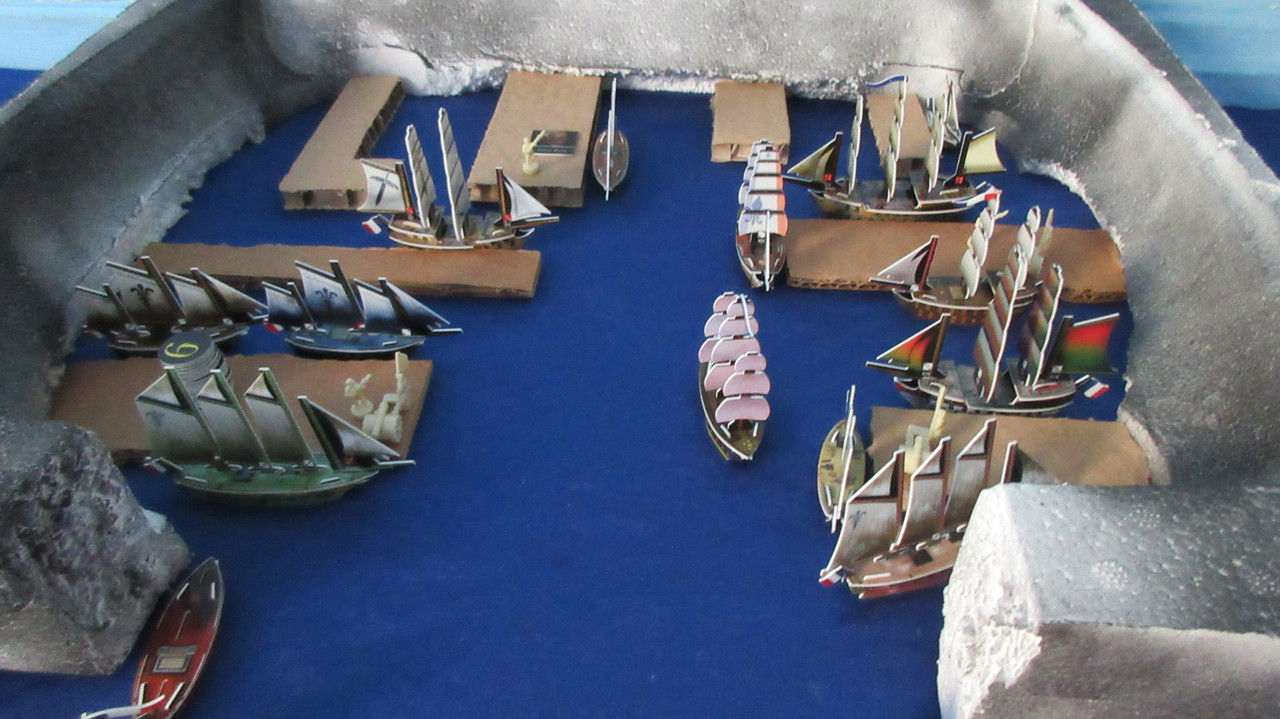 Here is most of the French deckplate area, with new launches joining the other existing ships. 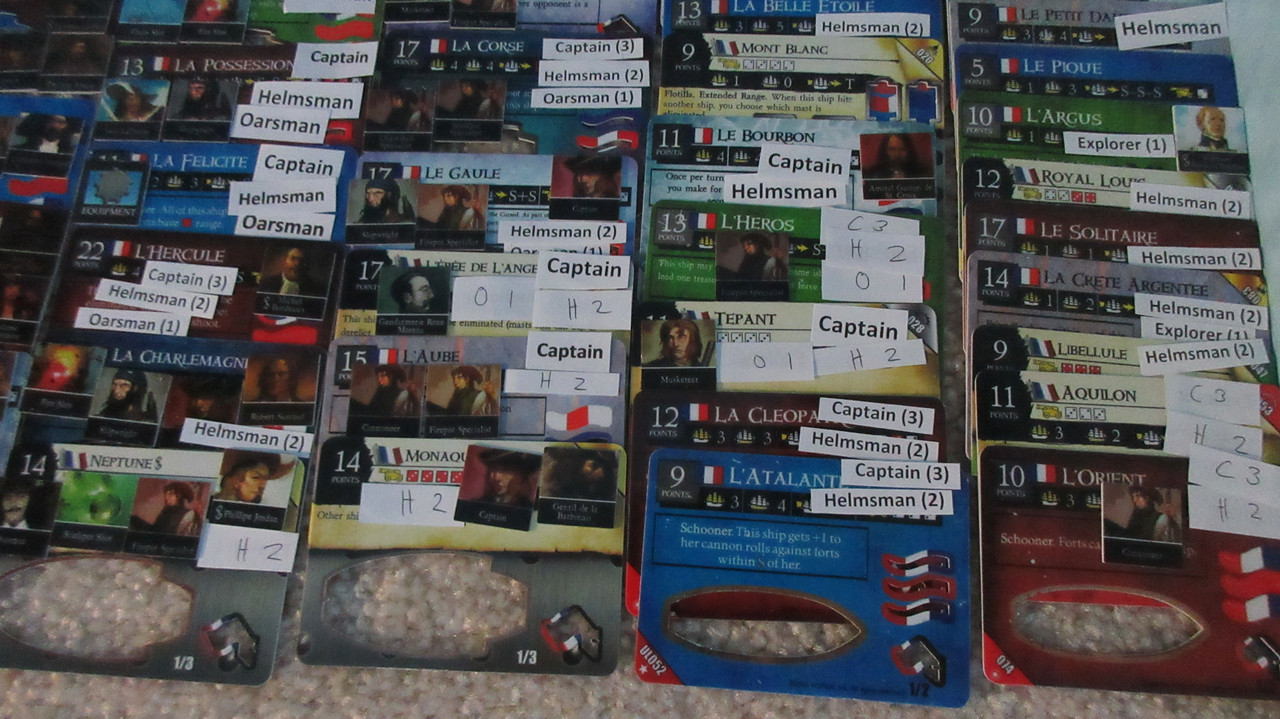 Cleaning up their victory, the Americans deal damage to the remaining Pirate ships near their HI, which at this point are only the Ranger, Thirty Tyrants, and Rickets. Much towing and awkward turning logistics ensue. 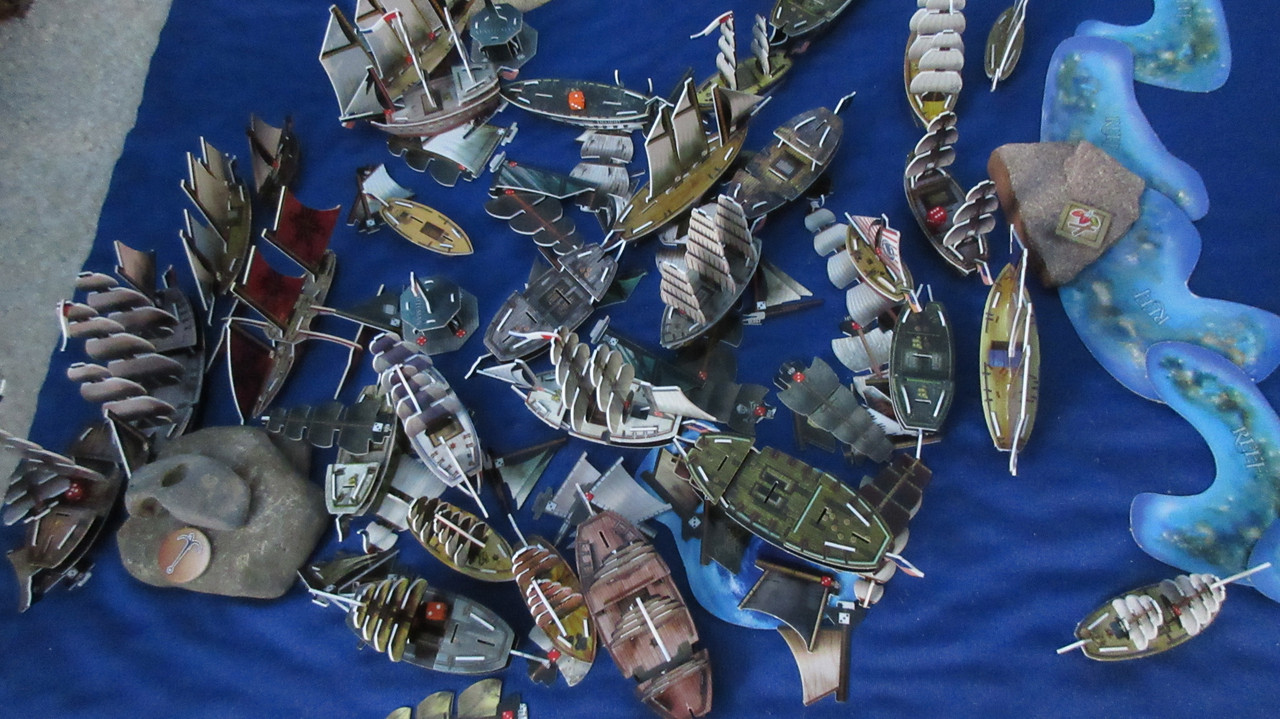 Definitely one of the most wreckage-filled battles I’ve had in a game of Pirates CSG. In many spots there are simply masts on top of masts, so it’s like a dense layer of wreckage, with ships sailing over it with some difficulty. O_O 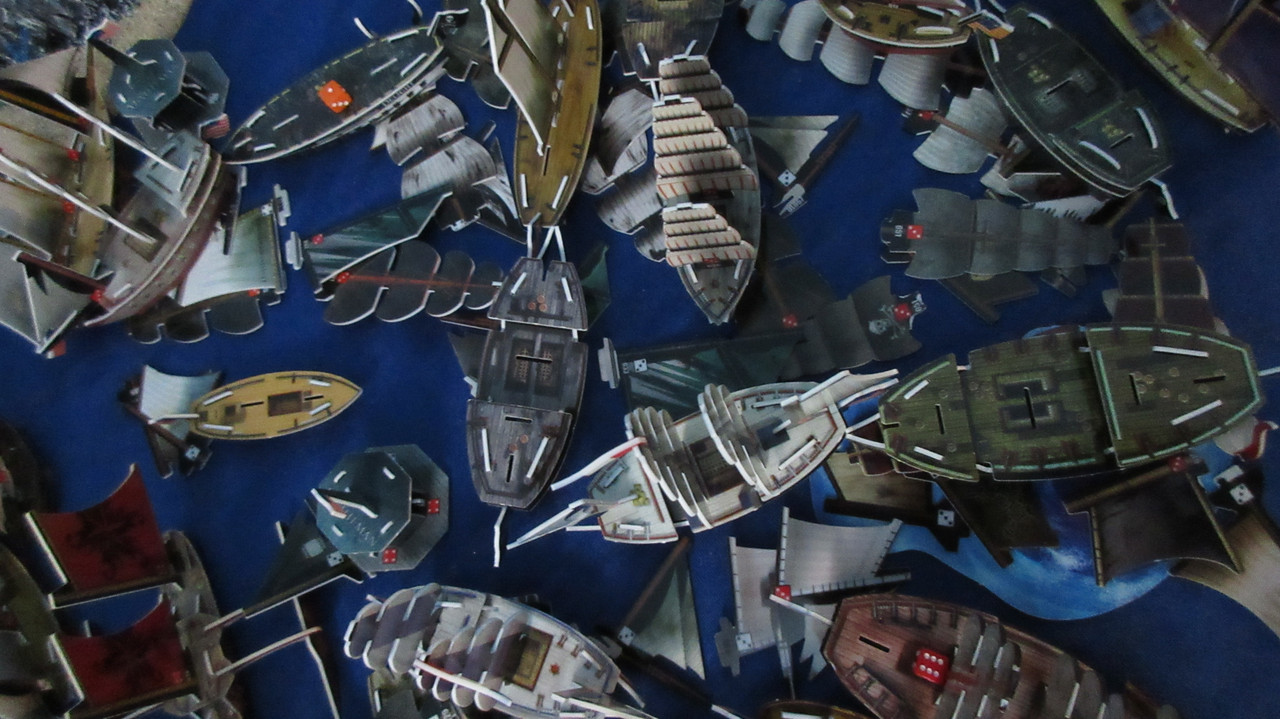 The Americans retreat, and the French have won the Second Fight at The Flat!! This may seem premature and even lame from a reader’s point of view, but there were various reasons behind the decision. First off, the French still don’t want war with the Americans, and were not the ones to initiate this conflict. The French senior officers talked down to the American captains on the attacking ships, telling them that not only have they launched two brand-new powerful warships at The Flat, but they have more on the way very soon. The French then threatened to spend even more gold next turn on more new ships, as they still have 204 gold! Compounding matters further, the host of American ships have been absolutely stopped by the French line, with not a single French 5 master dismasted or sunk thus far and various American ships dismasted or fleeing with 1 mast standing. The Turn 50 megalaunches saw the Americans purchase more ships, but the French got the best of their best, with various top-of-the-line 5 masters defending The Flat and some (like the Charlemagne) not even getting in action yet. Notice the troop transports loading up the army units, taking them off The Flat. 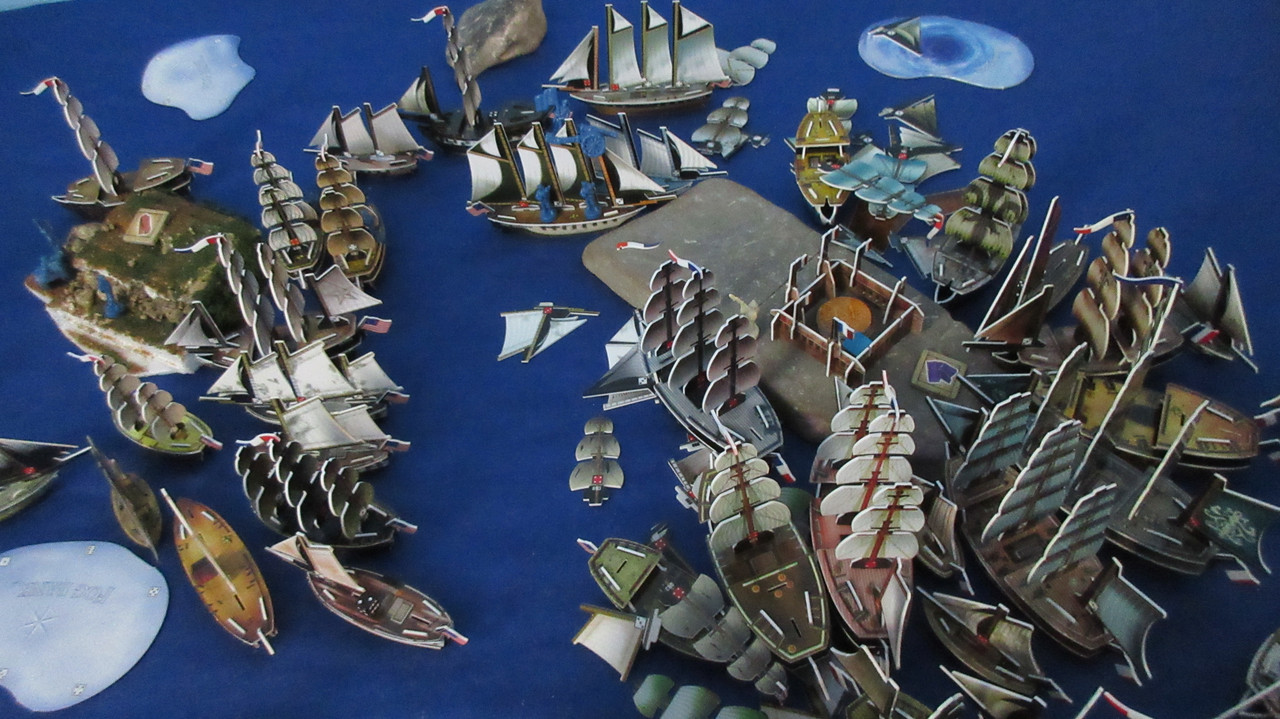 And thus, the Truce of The Flat is now in effect! Indeed, this is the first official truce or treaty in this game, and a concept that has been underutilized by me in my past campaign games. This is not a full peace treaty, but a truce that the Americans and French agreed to. The terms dictate that the Americans can retreat from the area in peace if the derelict American ships strike their colors. The Americans considered this a fine deal, as their long-term plans have been severely hampered by the French and they will have to re-evaluate their strategy going forward.

The Americans retreat west, but they are already formulating grand plans for the future, though that future is more distant than they hoped or anticipated it to be. Various possibilities exist: with two powerful foes (Pirates and French), the Americans may look for an ally to aid in their war efforts. Since the Americans know their way around the whirlpools pretty well at this point, reaching out to other factions is a possibility, though the Americans assume the Spanish are as weak as they were earlier in the game and they don’t have any idea about the Jades and Cursed. In addition, with a possible peace with France suddenly materializing, the Americans may be able to throw their full might against the Pirates. An extended whirlpool trip could be costly, but with two large-scale battles just recently going on simultaneously, the Americans have shown the financial power needed for such an endeavor. 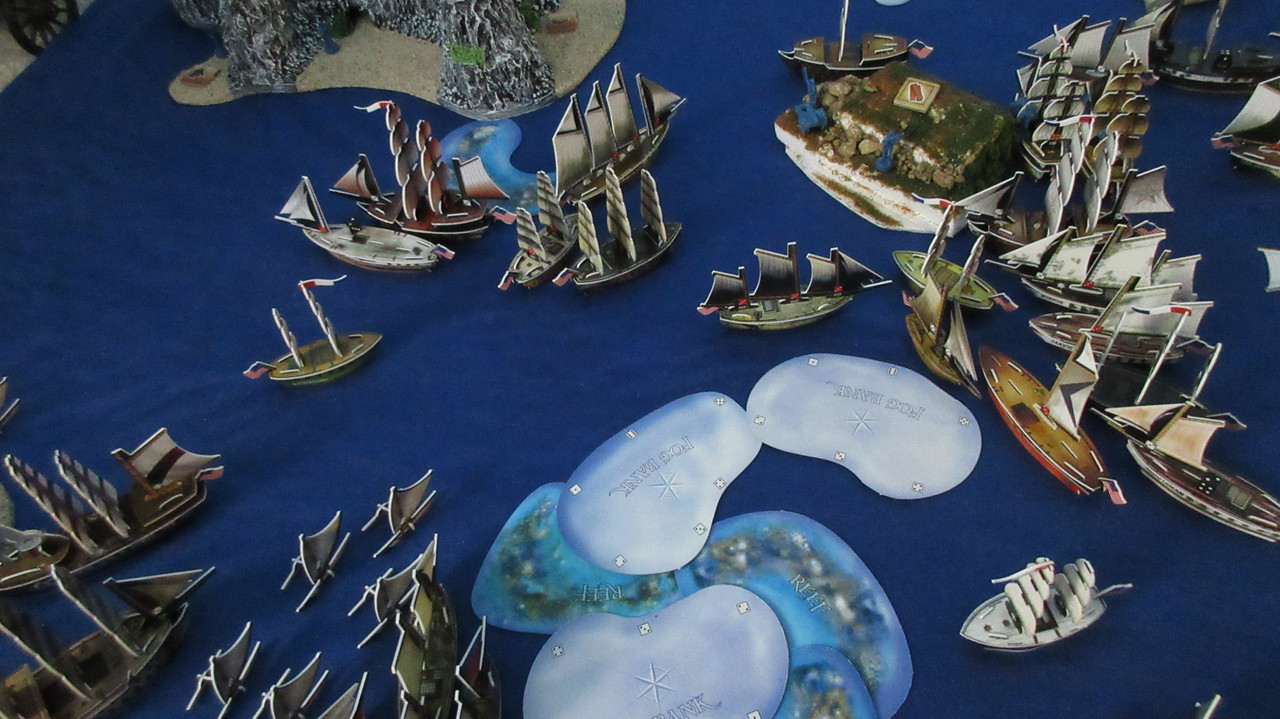 With the battle against the French over, a few healthy gunships try to find a shortcut home, going along the side of the large structure that will be officially revealed when it is fully explored. 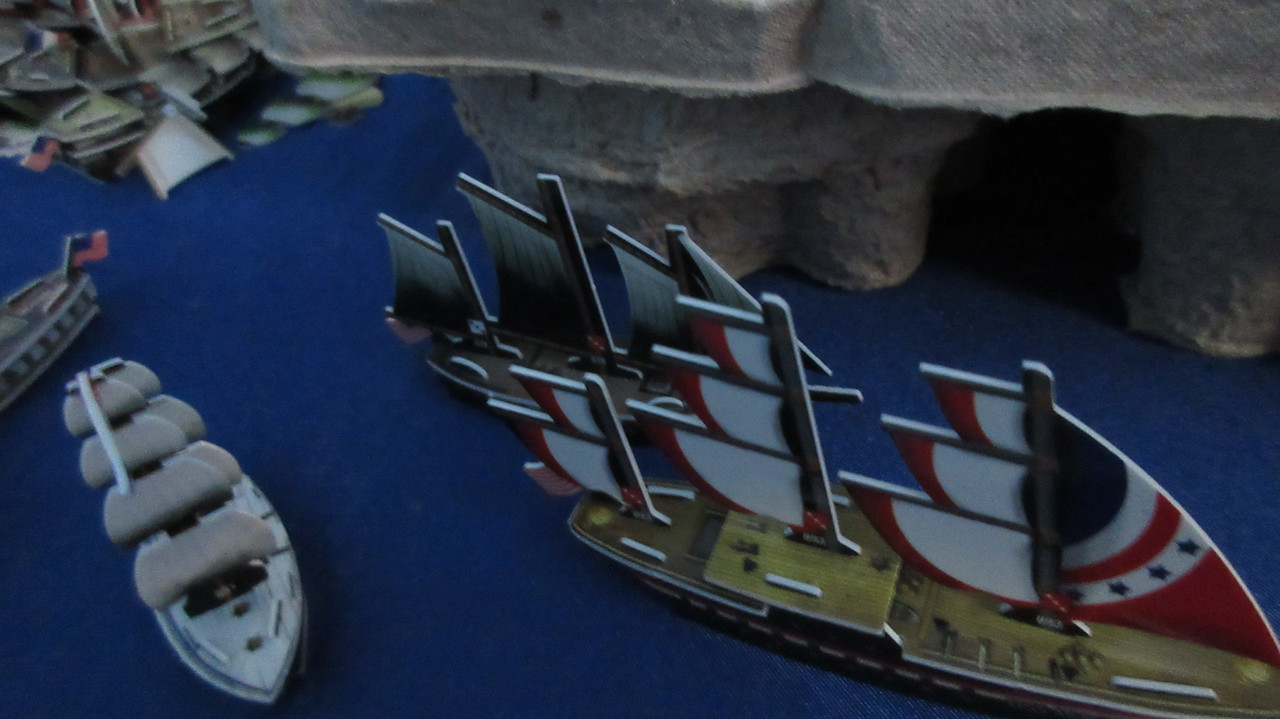 From the mainmast of USS Mercury: 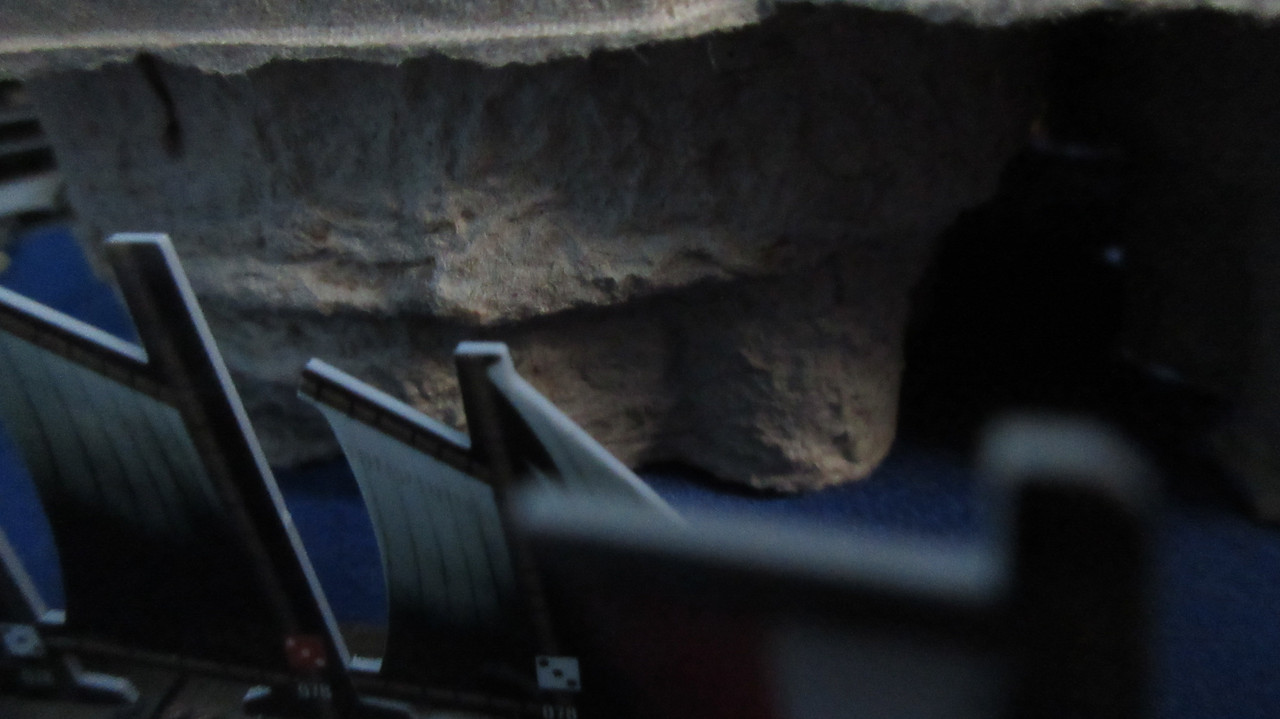 The Americans spend big as well! In fact, they cash in ALL of their luxuries and combine it with some gold and cashed in lumber to spend a whopping 228 gold! A full dozen ships are purchased, among them the Congress and Concord, which are relaunched in the same round that the French traded them in. There is a thing happening: The Mobilization of the American Navy. Preble coined the phrase after learning of the Truce of The Flat, and it represents a period of change for the Americans. They have won their first battle, a serious effort against the Pirates. However, the French are far stronger and defensive than they anticipated, leading to a major loss that would likely be far worse if not for the sudden truce and retreat. At this point, the Americans need to repair, regroup, and mobilize. Many plans are being considered in addition to the possibilities above. 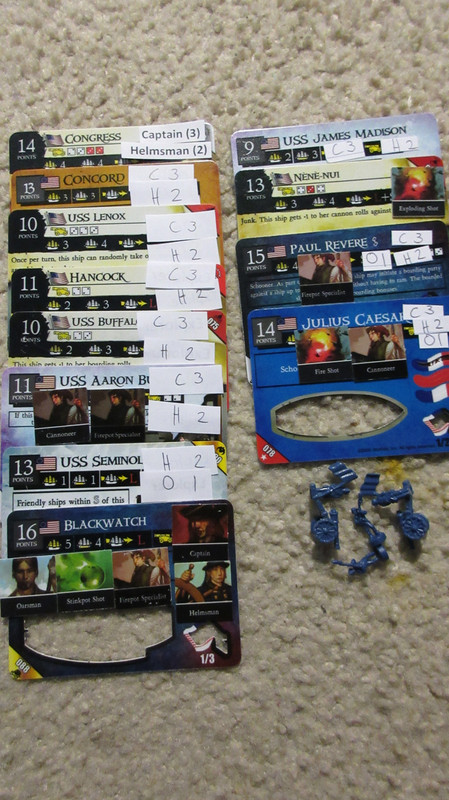 Clearly I’m going a little overboard with the thematics with the Americans in this game, possibly since they go last in the turn order and therefore usually last in the reports. However, I think it’s fun to give a full insight into the mind of one of the factions, as the reader doesn’t know all the strategies being considered by the other factions. That’s not to say that each faction has strategic thinking as deep as the Americans lately – for example, the Jades and Cursed have been in pure war mode for a while and are simply concerned with eliminating the other. However, it’s fun to give you the full breakdown for at least one of the factions’ thoughts, and hopefully I can expand on more of the others.

The super-accurate Blackwatch highlights the additions, while that ship, the Paul Revere, and the Julius Caesar are some of my favorite American ships. 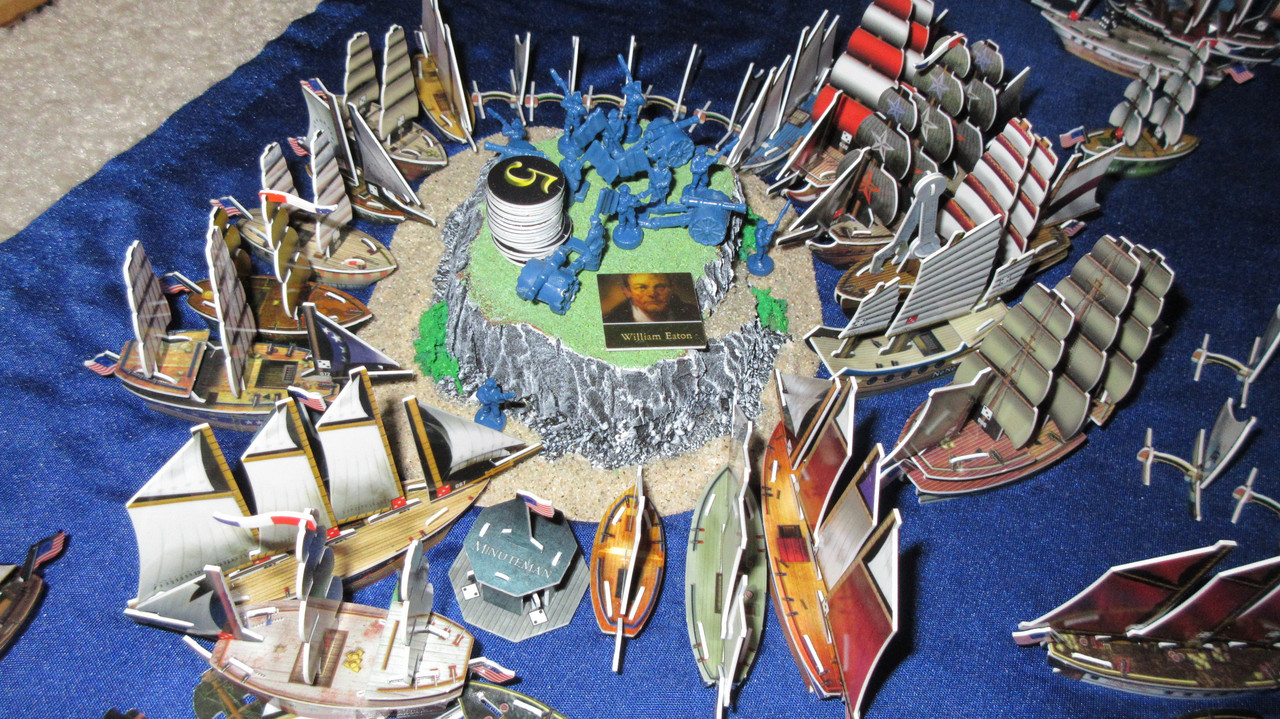 With that, I look forward to some amount of action tomorrow, and a point count within the next 2 or 3 days. However, Saturday-Tuesday will see considerably less action so I will likely just play “faction turns” when I’m able to on those days. Thanks for reading, and feel free to comment!