Played most of Turn 55 just now.

The Pirates aboard the smaller ships are curious about the Tunnel: 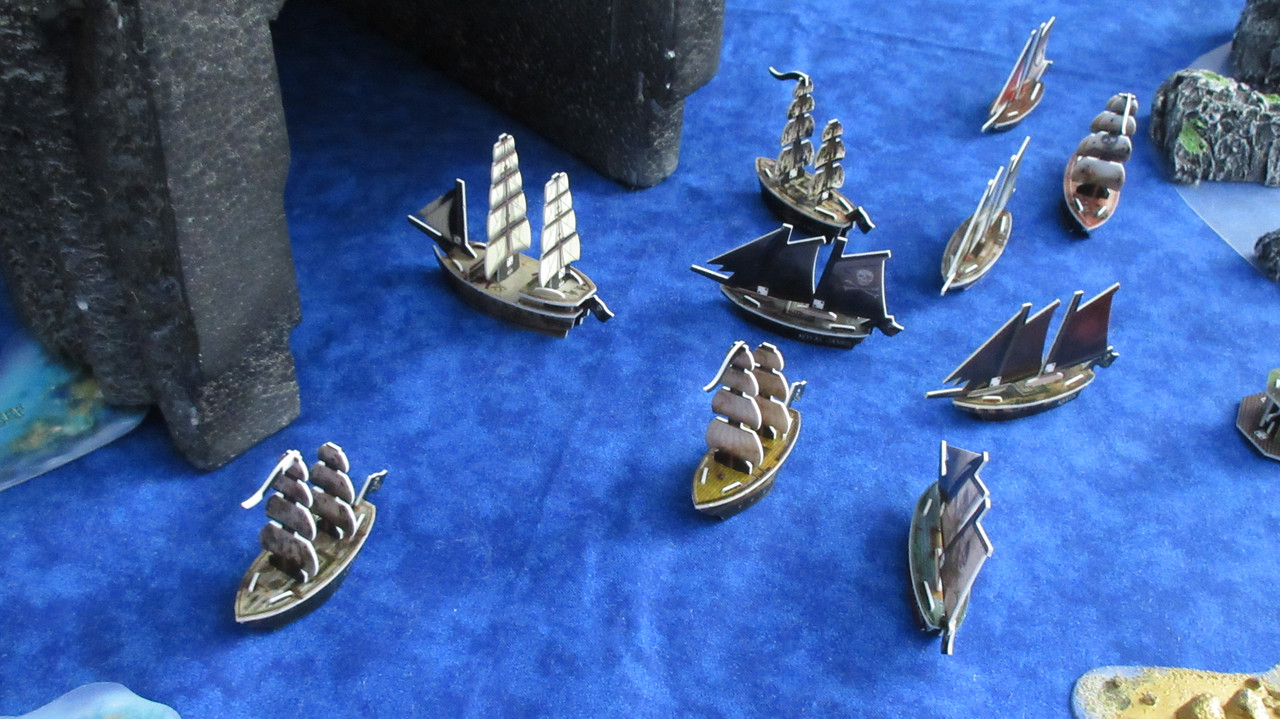 At the other end, the Revenant gets a 6 to emerge from the fog and turn around! The other Pirate gunships are now nearly caught up. 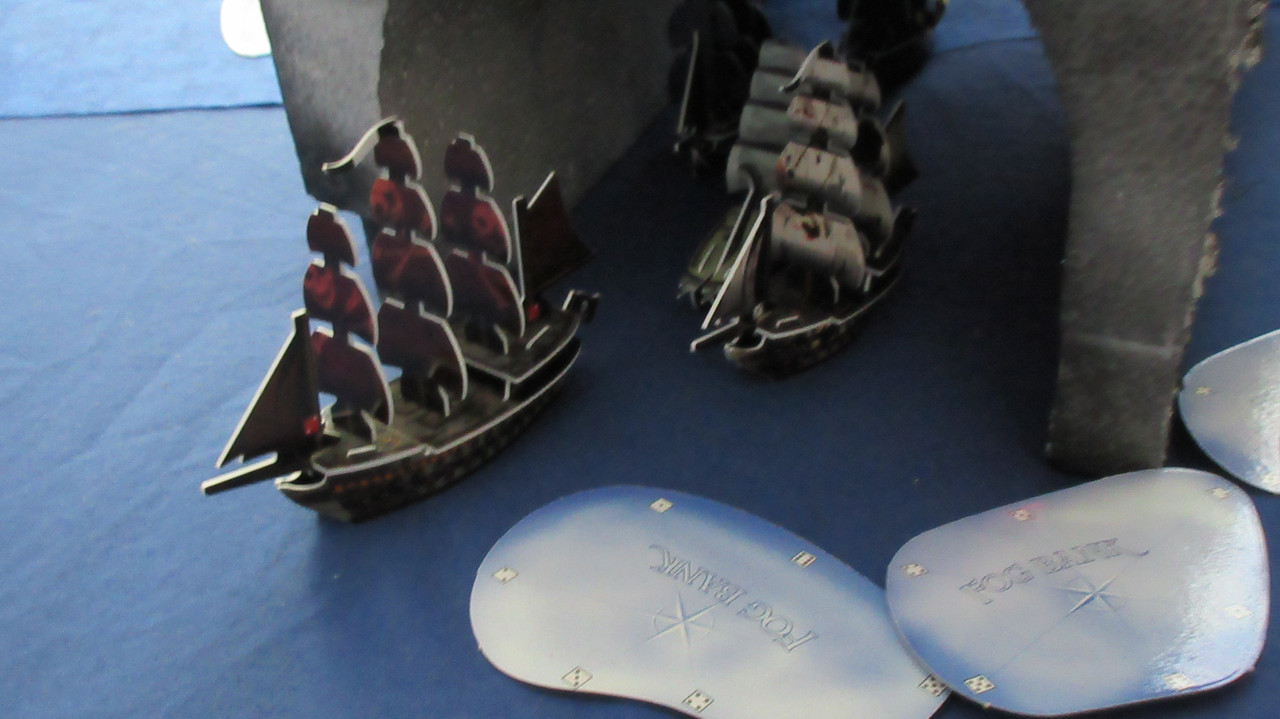 The damaged Pirates in the Sea of Karkuda suffer an abysmal turn, doing almost no damage to American ships. 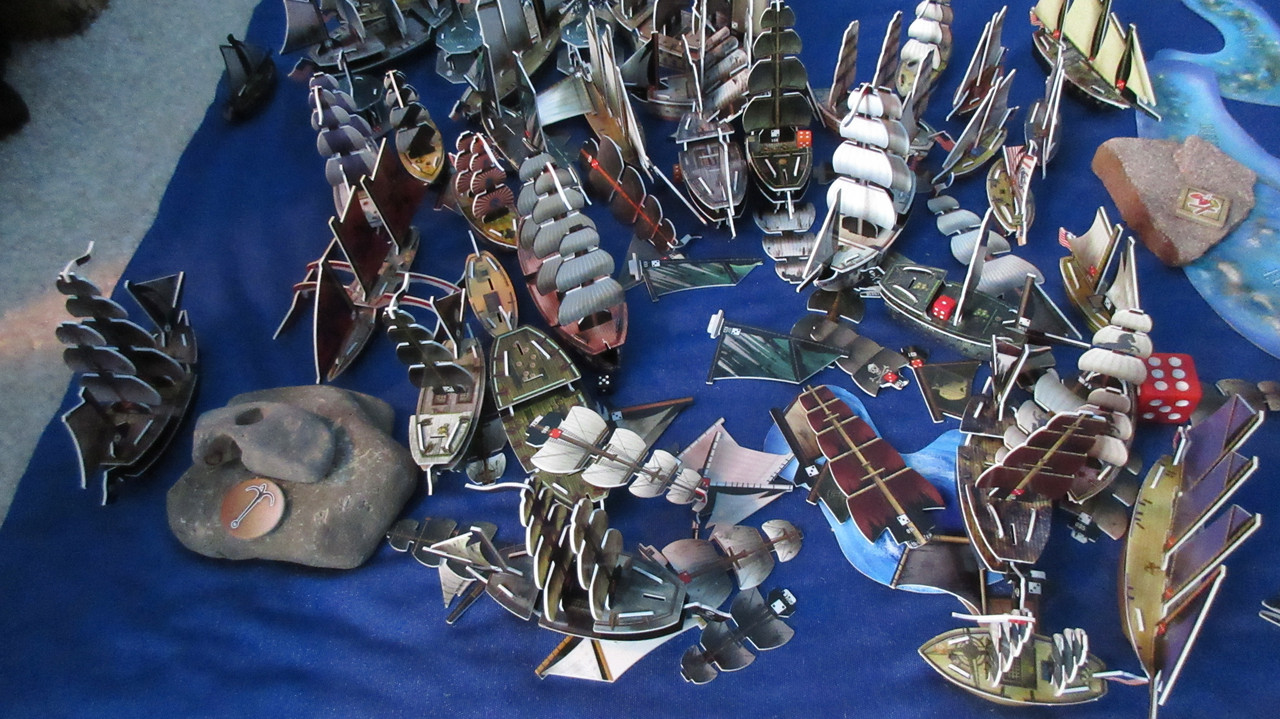 After the Lady’s Scorn sank due to her fire masts, the opening allowed the Delight to charge forward and ram the President! Preble’s ship was under attack by a third Pirate gunship during this battle. The Delight scored a hit but lost the boarding party. 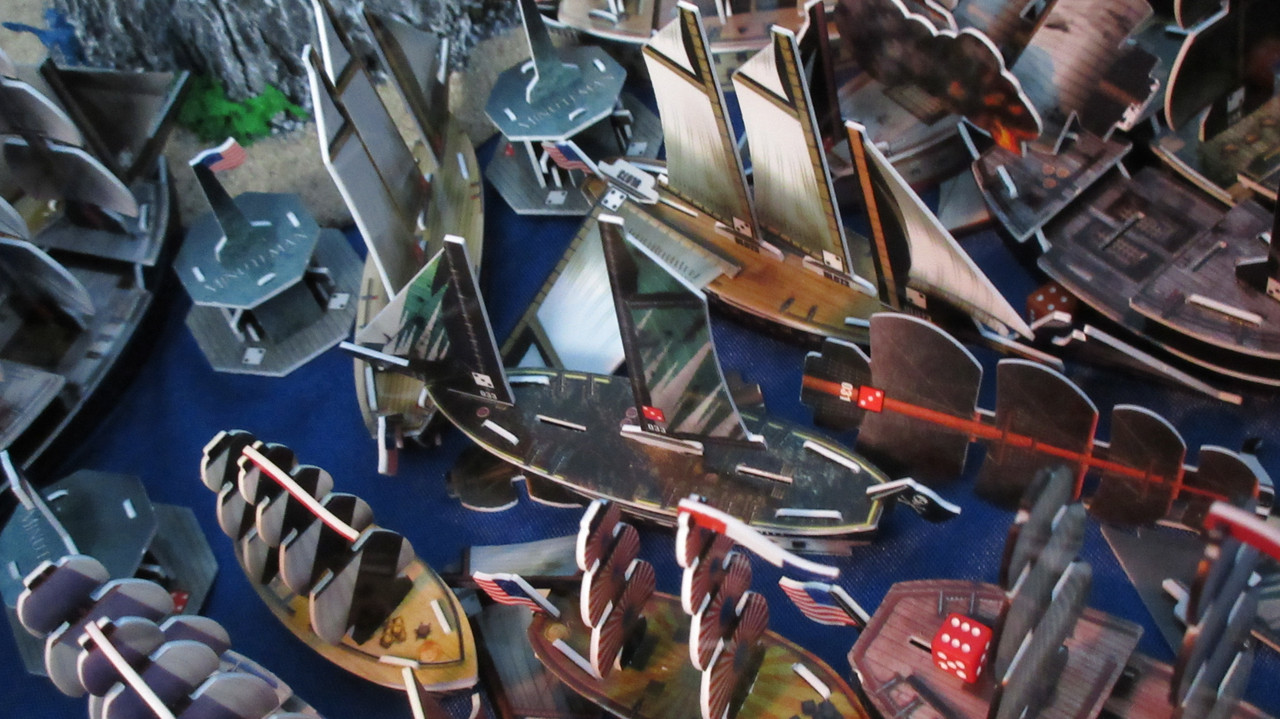 The Ballista and Jape roll well for their fire masts, but in their weakened state they are unable to keep up an effective rate of fire against their adversaries. 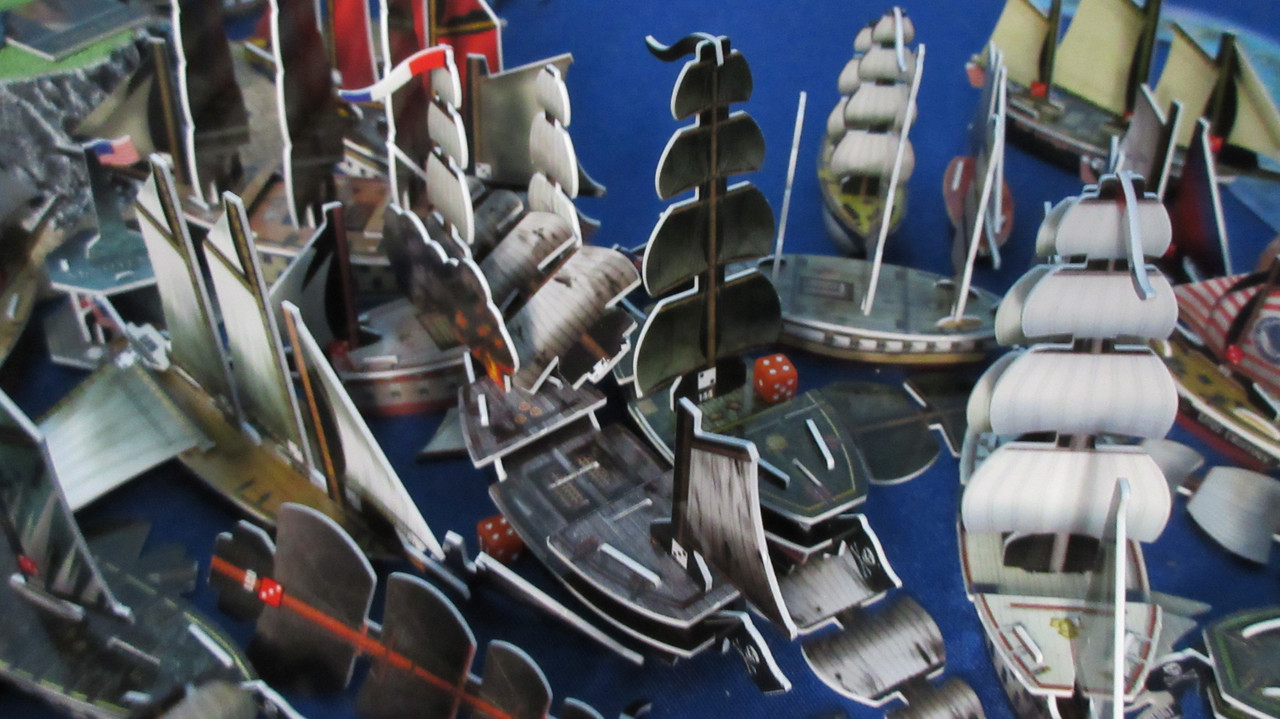 The Paladin is hit again with Fear along with shots from the Centurion, but the Americans will be able to do major damage on their turn. 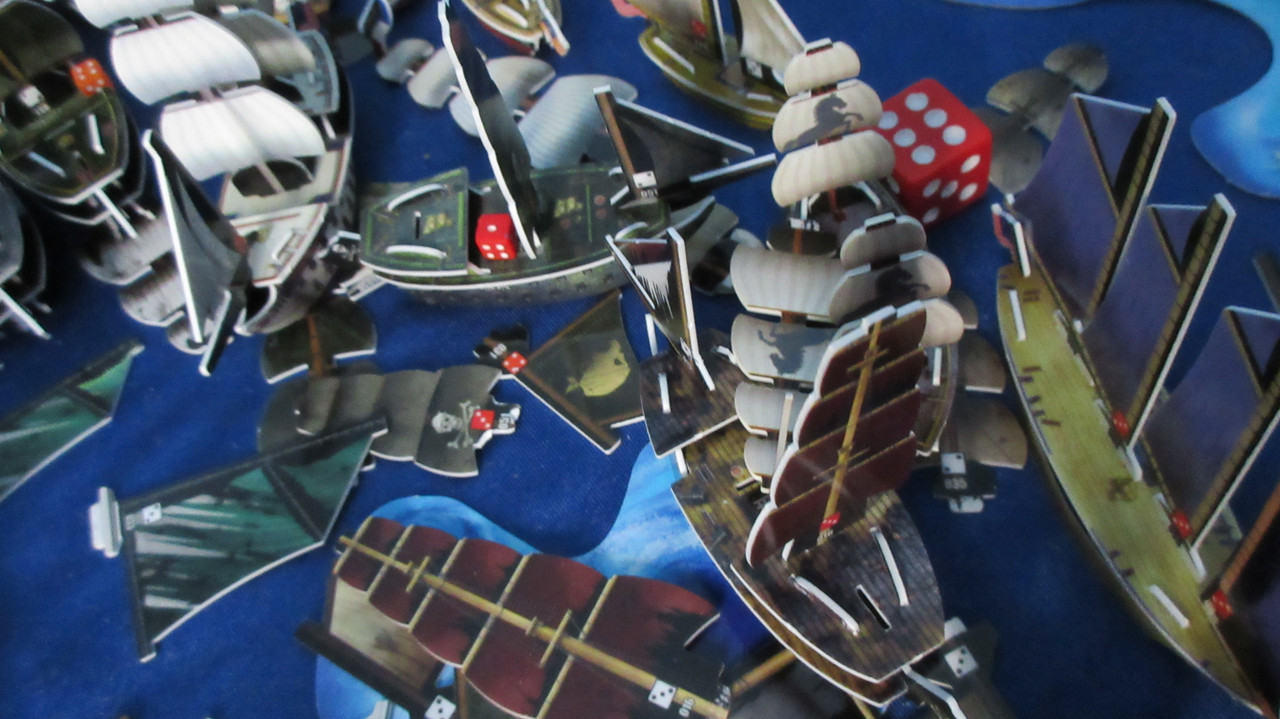 Returning from the northern part of Karkuda where the American-French battle has begun, the Mystic tells her fellow HI raiders that the French are not a good faction to steal from either. At this point the Pirates have encountered difficulty trying to raid the Americans, French, and even English to a lesser degree. 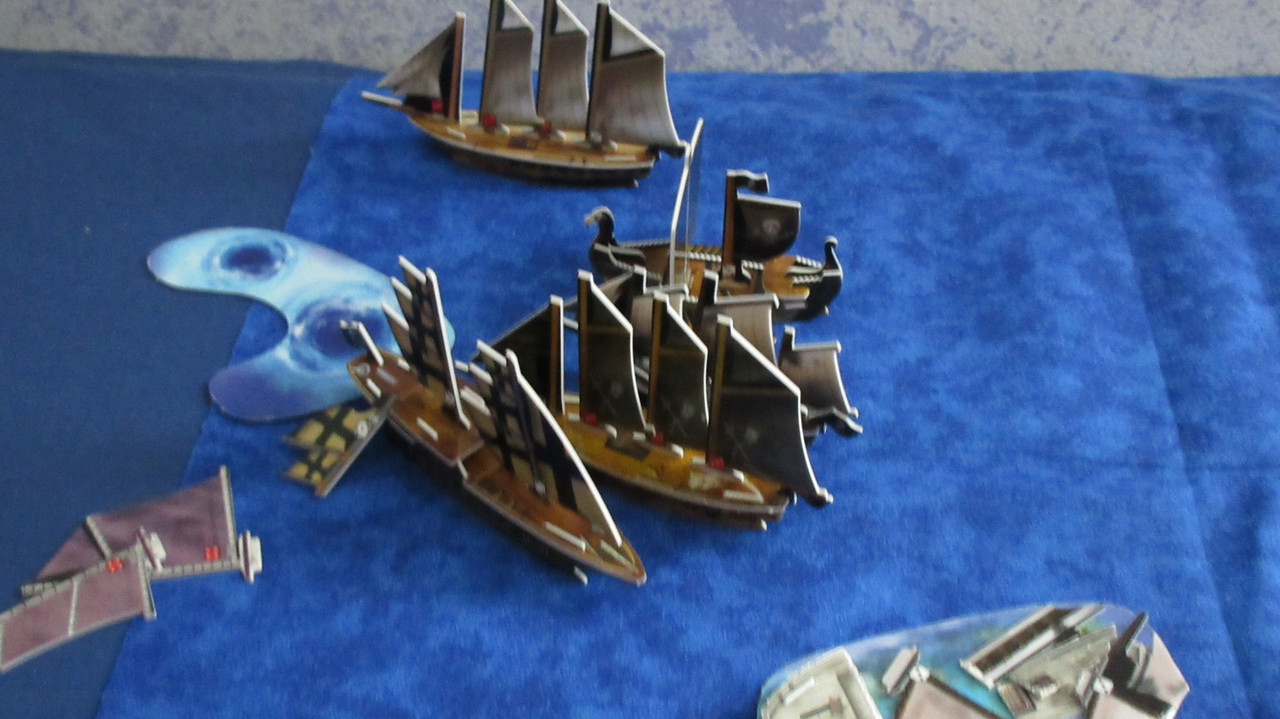 No less than 7 Jade ships have been repairing at their HI: 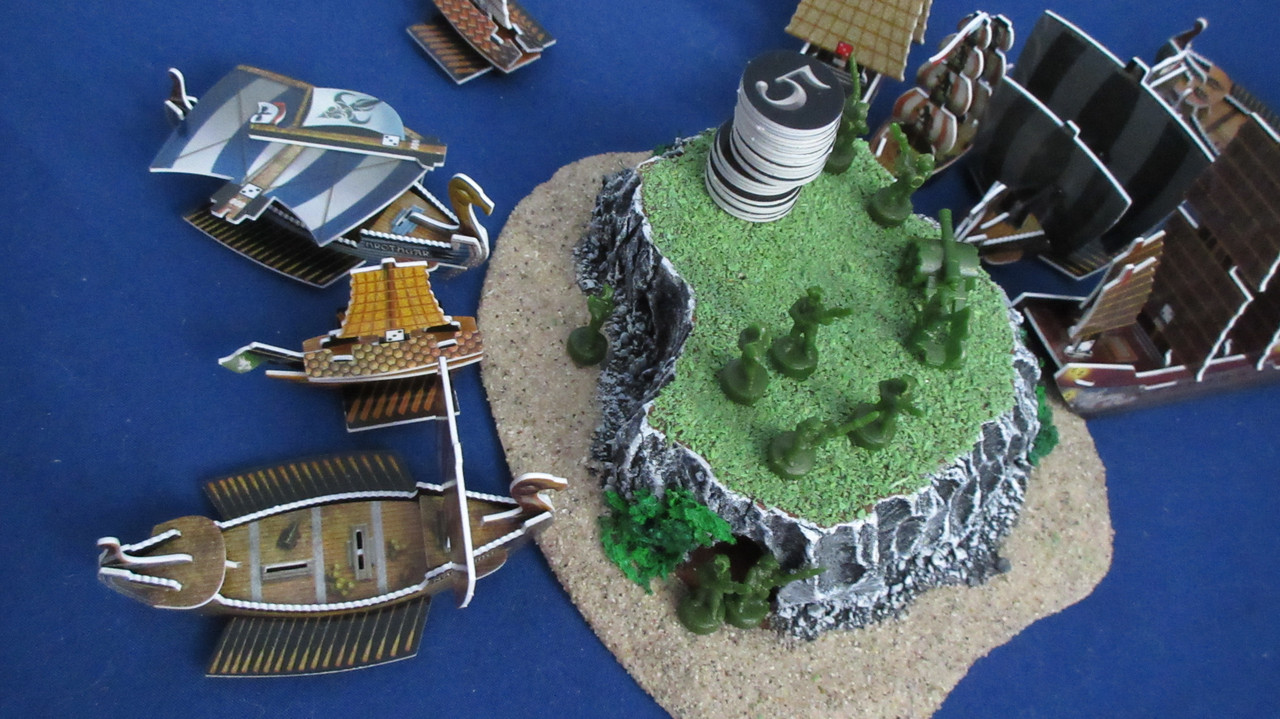 However, between recent launches and some already-healthy ships, the Jades have an 8-ship squadron heading out to counter any potential Cursed invasion: 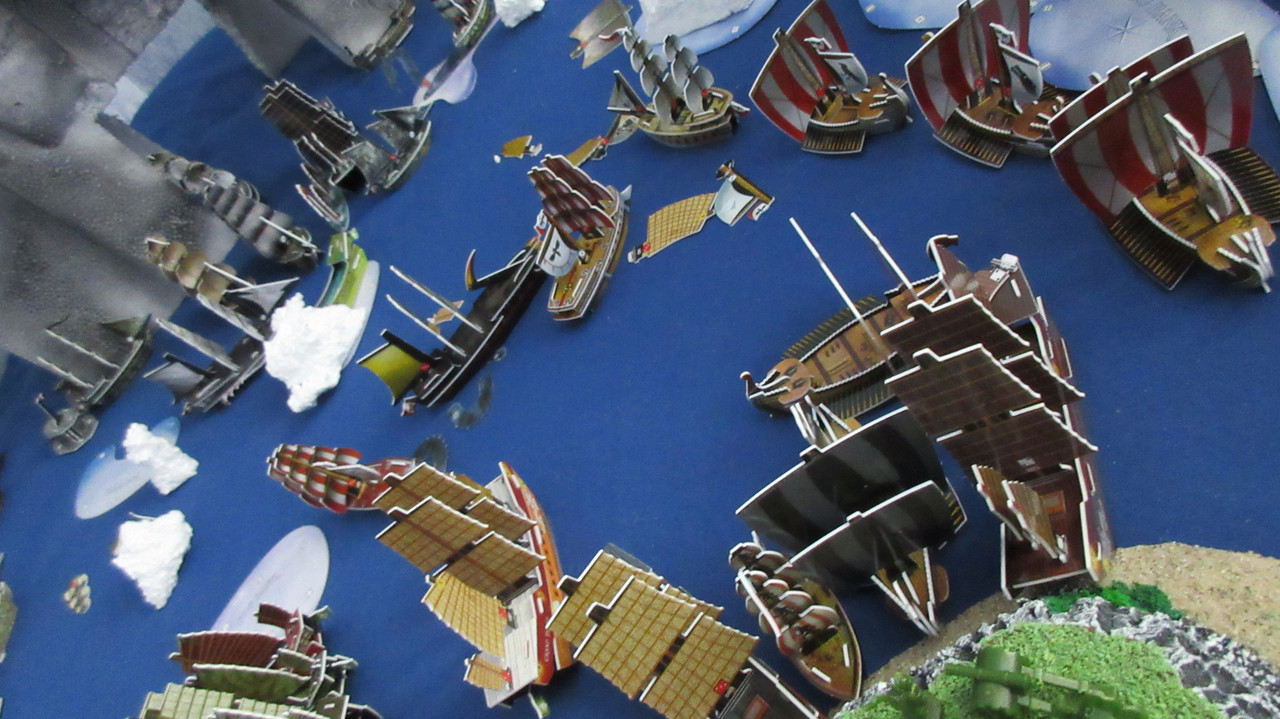 And indeed, the Cursed are building back up and are hungry for a true victory in this bloody but inconclusive war. 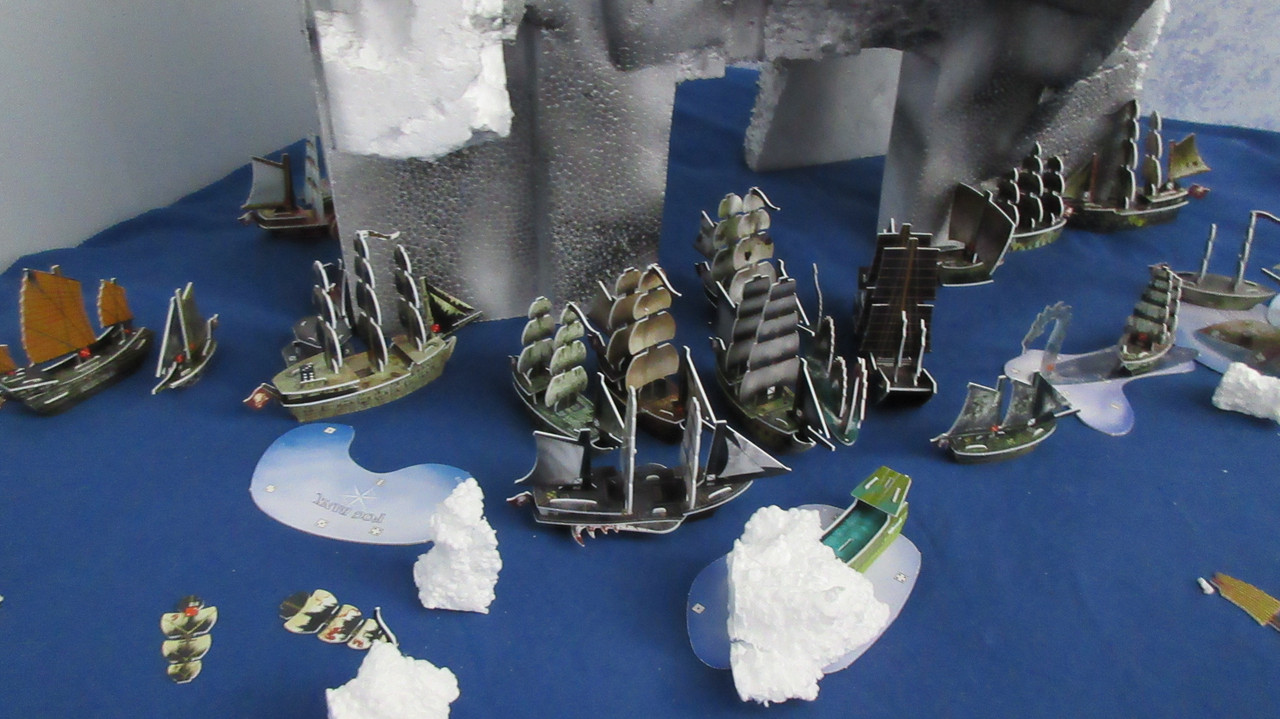 The English HI becomes busy, with a few ships repairing and the Eternally scuttled Ark Royal joining them along with some cargo ships. 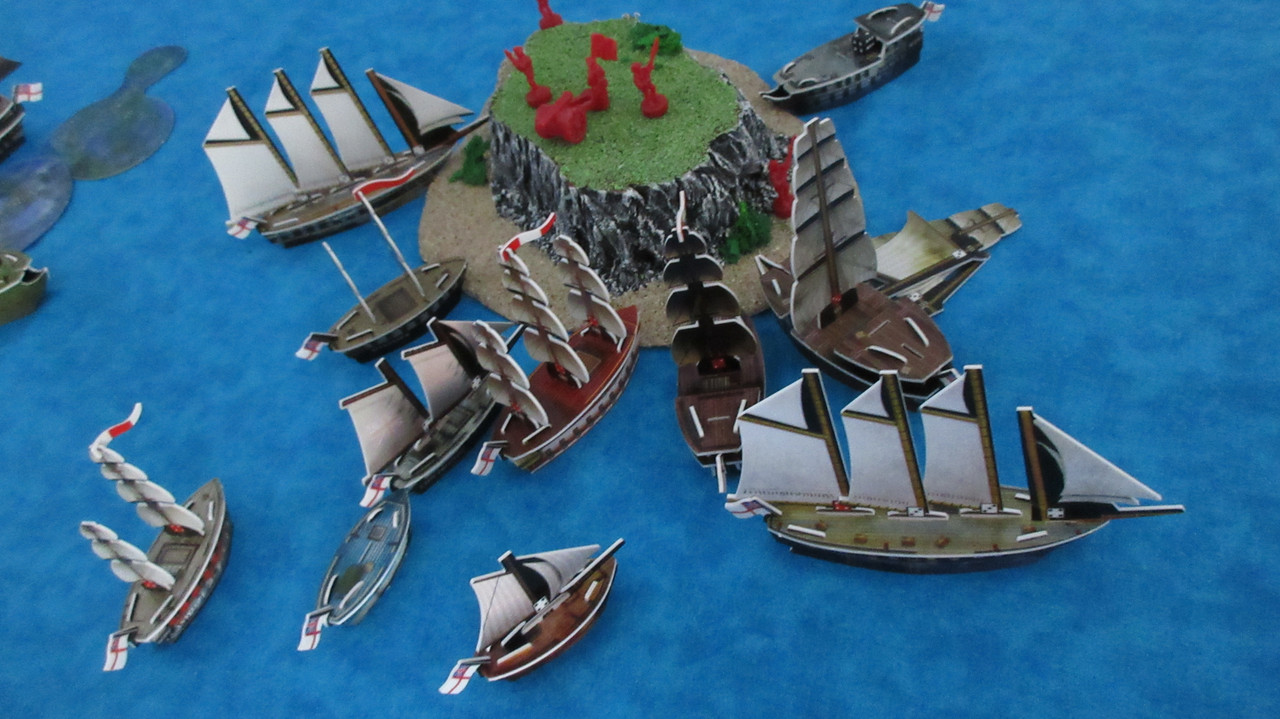 The captains of the Lord Kettering and Voz de Dios nearly agreed to a short truce to the hostilities, but negotiations didn’t last long! After a short conversation the English carried on, with the LK continuing to tow the captured Extremadura. The Granville, Resistance, and Orkney teamed up to score 5 hits on the Voz, nearly dismasting her! 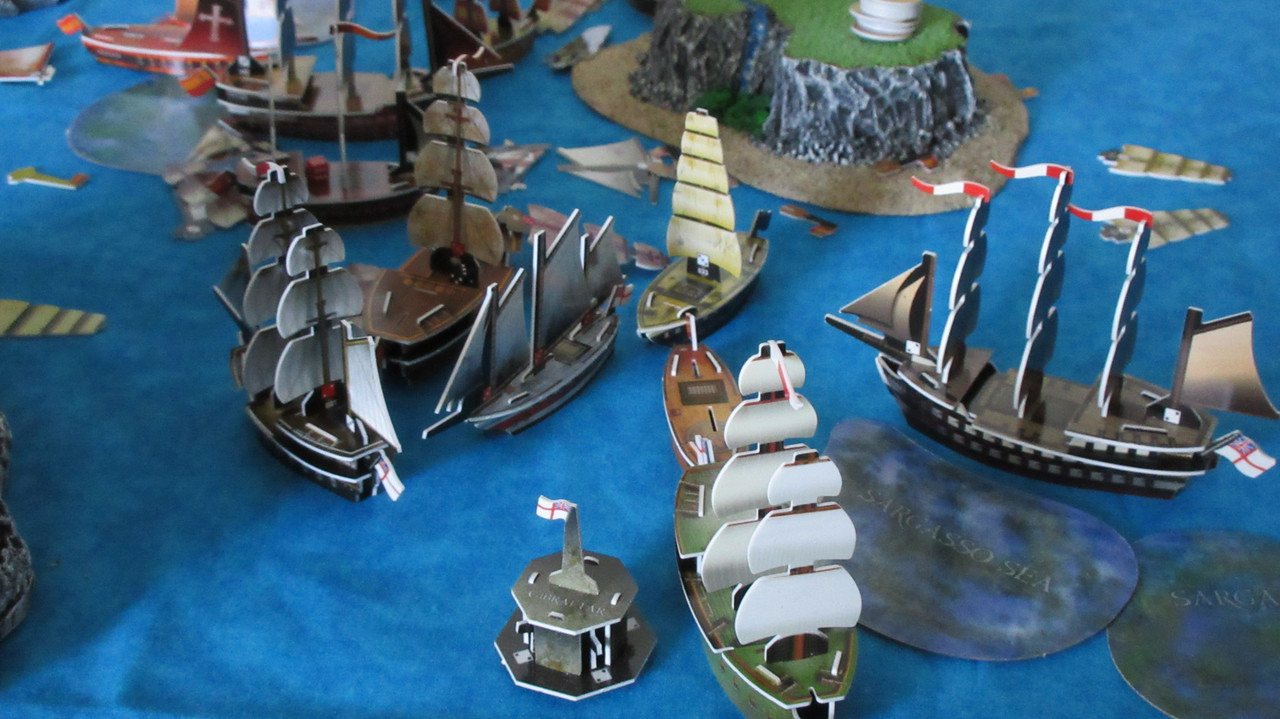 The Spanish don’t have enough for a great counterattack, but the Corazon del Mar proves surprisingly successful, hitting 3/3 to set the Granville aflame! At the left, the Cristal will be the first ship to explore Paradise Island since Fortaleza Dorada was destroyed. The island holds the Spanish gold used to build the fort, but it may produce a new resource again too…. 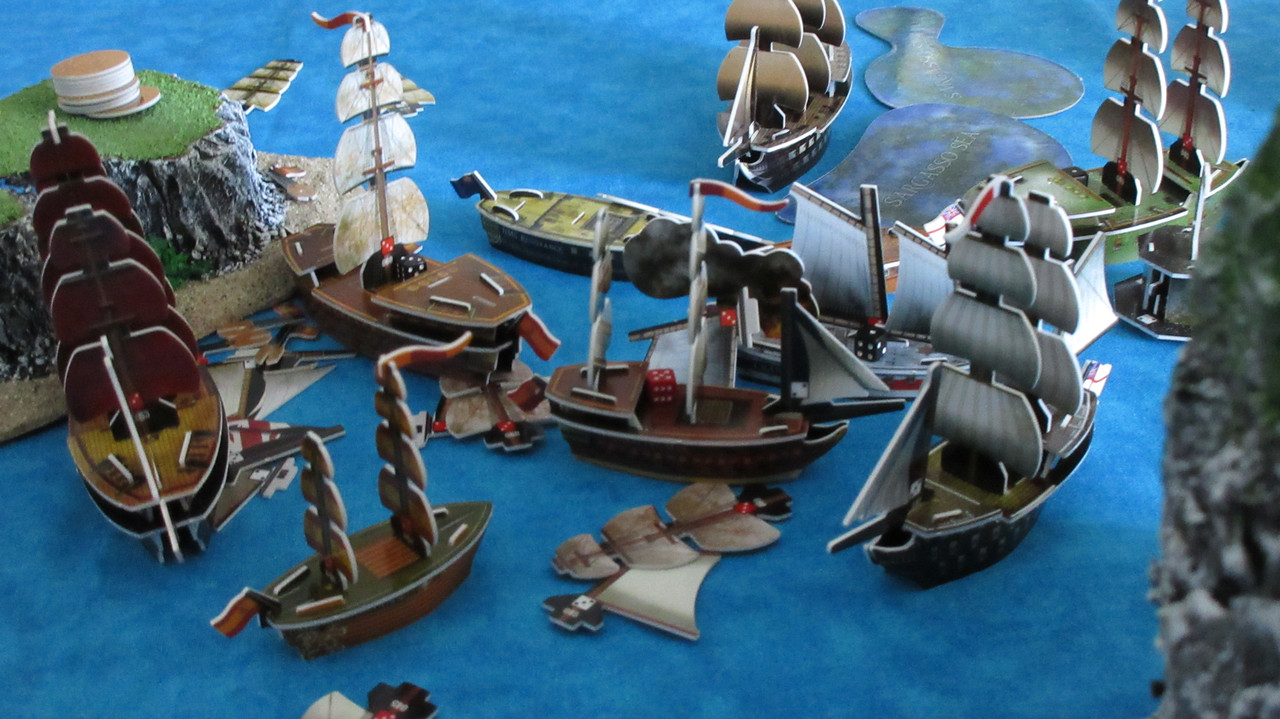 The Spanish bring the captured Royal and damaged Armada back to their HI, where the Santa Ana finishes repairing with an EA. At the right, the newest Spanish warships have sailed out, and it looks like they’re heading towards Paradise Island…. 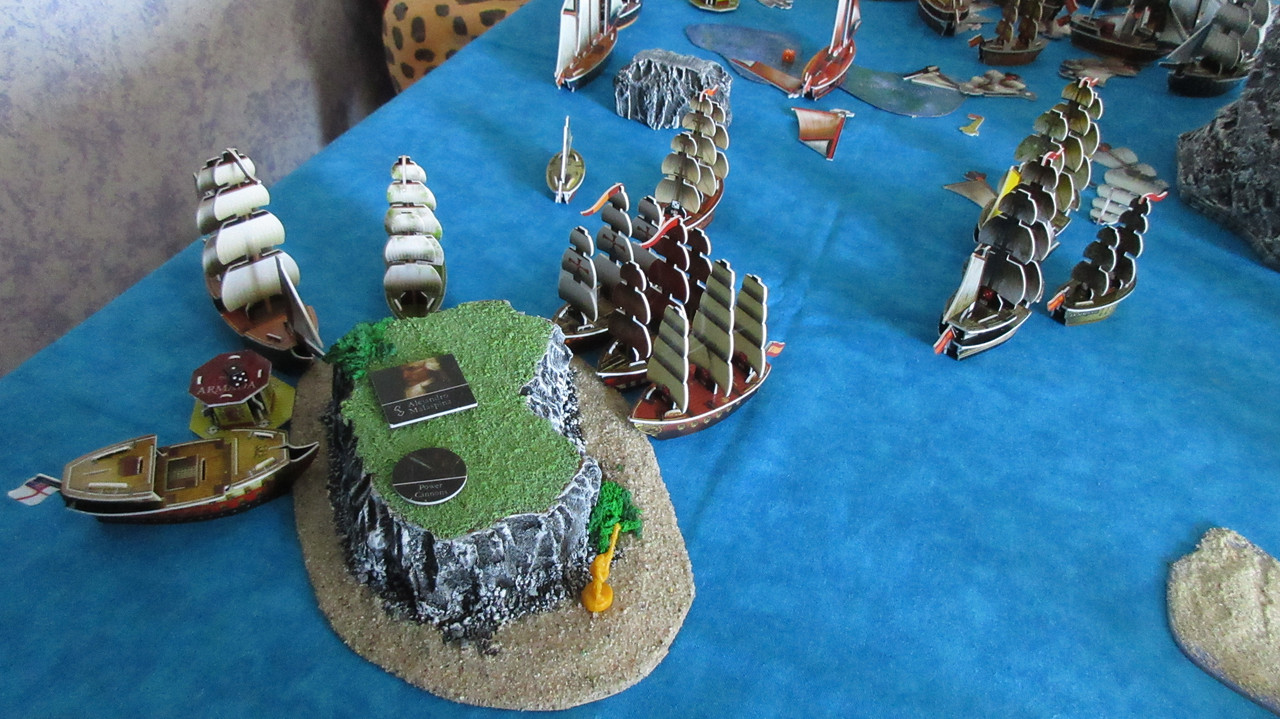 The French have a nice turn against the Americans! At the right, the Delacroix and Bonaparte flee for repairs, with the Hercule and Felicite replacing them. At the lower left, the Ville de Paris gets an EA to cripple the Grampus, while the Cleveland and Saratoga are hit with firepots. The Superbe is in an excellent position where she can shoot through friendly ships to hit hostile ships beyond. So far, the large French capital ships have plugged and held the gap, not allowing for American ships to reach the fort or advance their long supply chain of ships. At the bottom, the Solitaire and Crete Argentee have arrived, so next turn their bonuses should really help the French stay accurate. 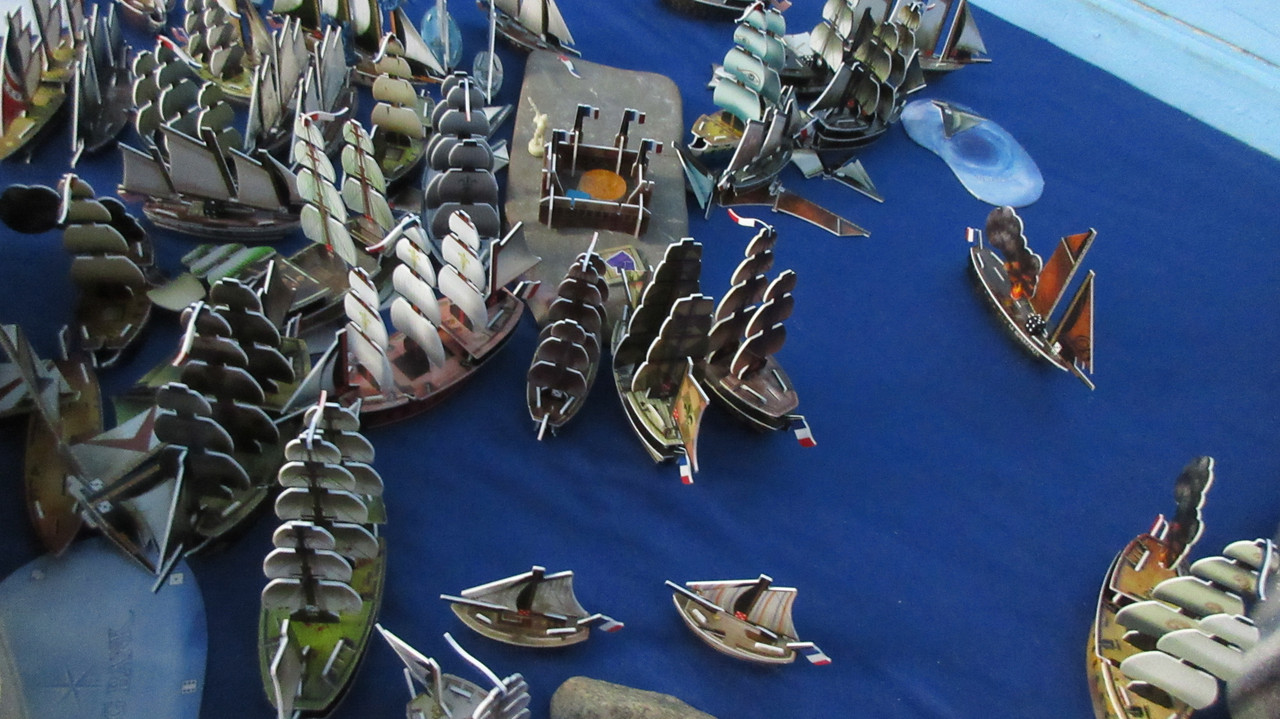 The Dauphin Royal has extinguished her fire mast and reversed direction, while just above her you can see a major development: the Royal Louis was given an EA from Deleflote to unload the French fort upgrade at Paradis de la Mer! 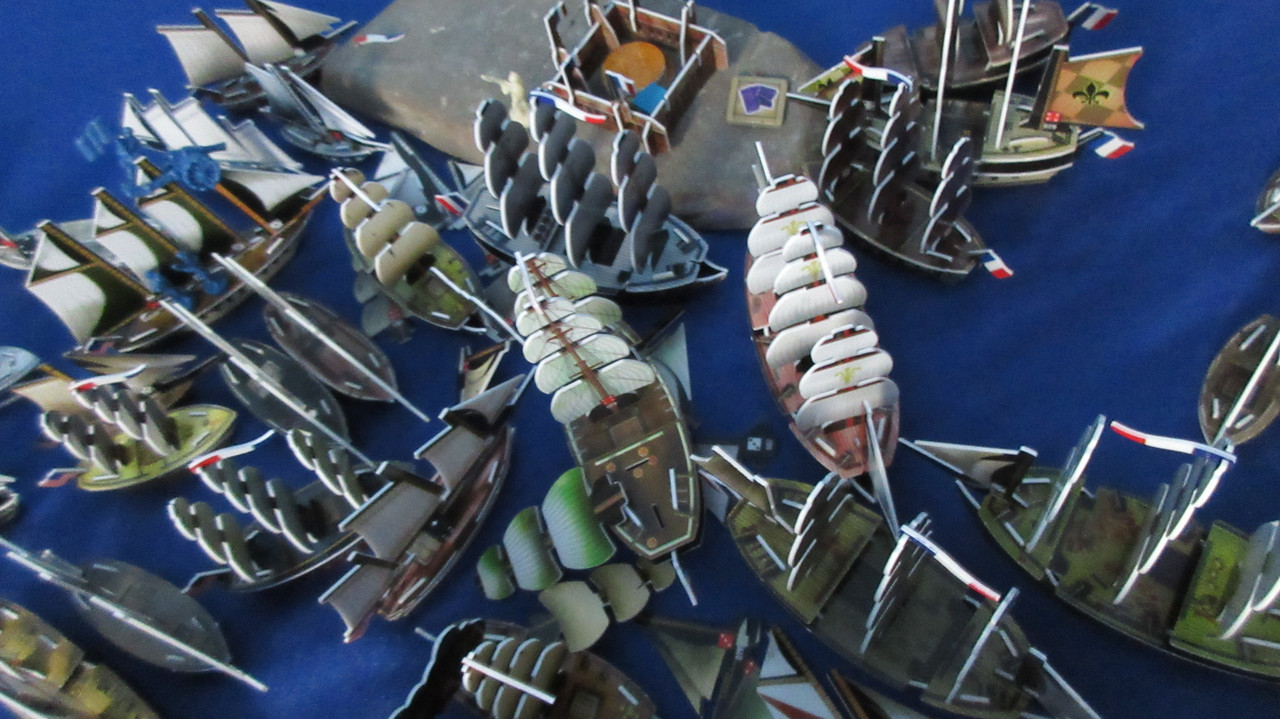 Tomorrow I hope to finish this turn with the Americans and finish all of Turn 56!