Nemo continues to speak with Gaston and the French captain of the Aube.

However, he grows frustrated, as even he cannot explain the mysterious disappearance of Eileen Brigid O’Brien and the Celtic Fury. Mid-conversation, he abruptly goes below into the Nautilus and orders the submarine to dive!! 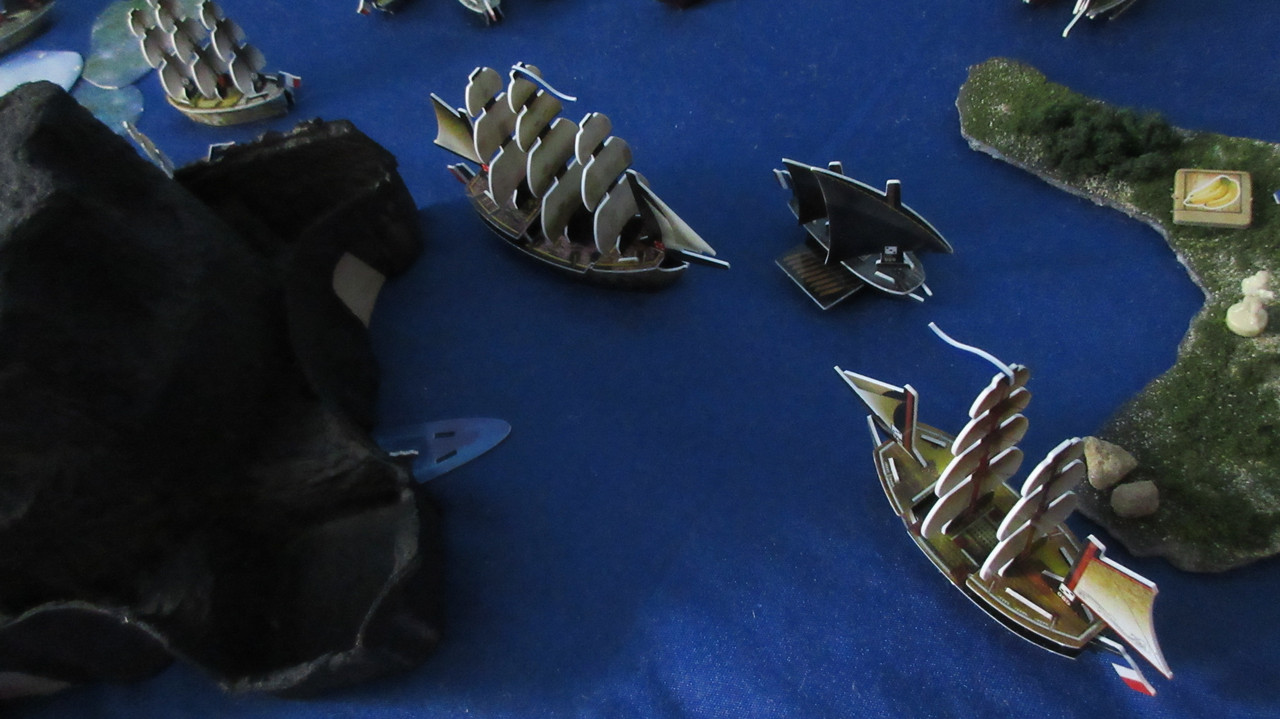 The Nautilus speeds into the Mercenary sub hideout, and the doors close for the first time since they were opened! Nemo is gone! 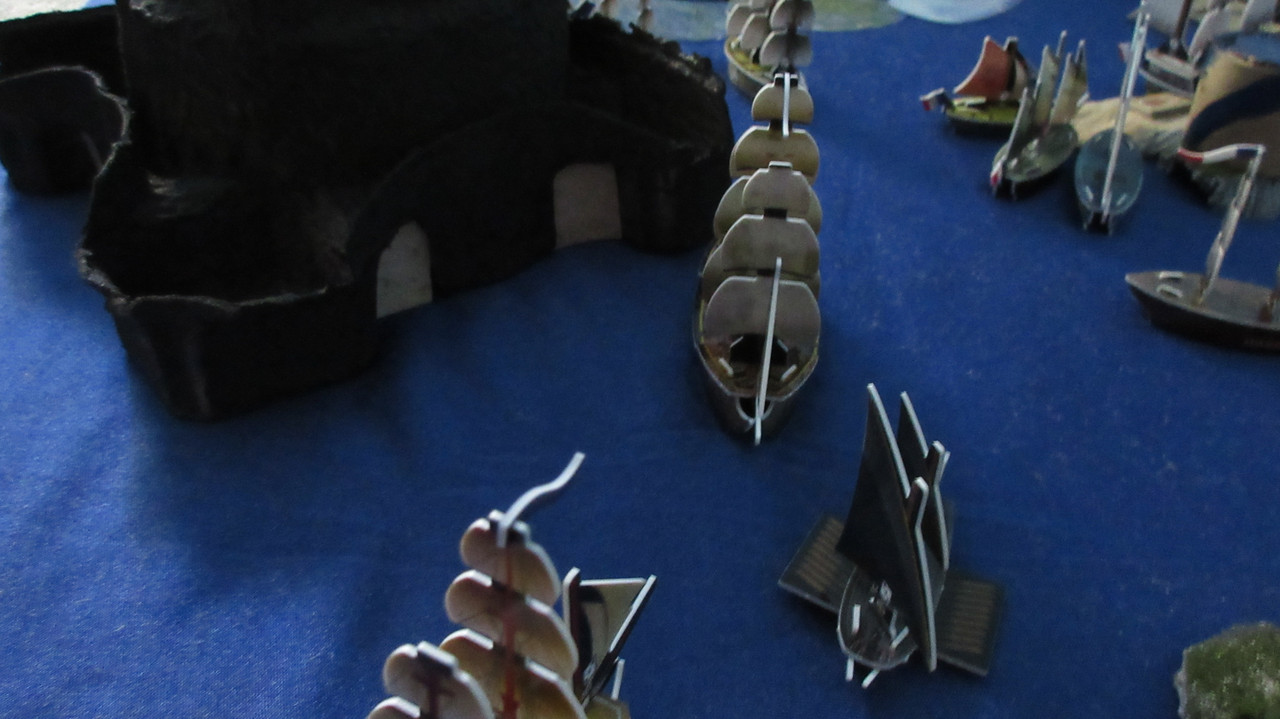 Over on the south side of the hideout, the Devil Ray and Mobilis have also gone into the hideout, with the doors closing behind them! The Mercenaries surface inside, unloading some food and cashing in textiles for gold. 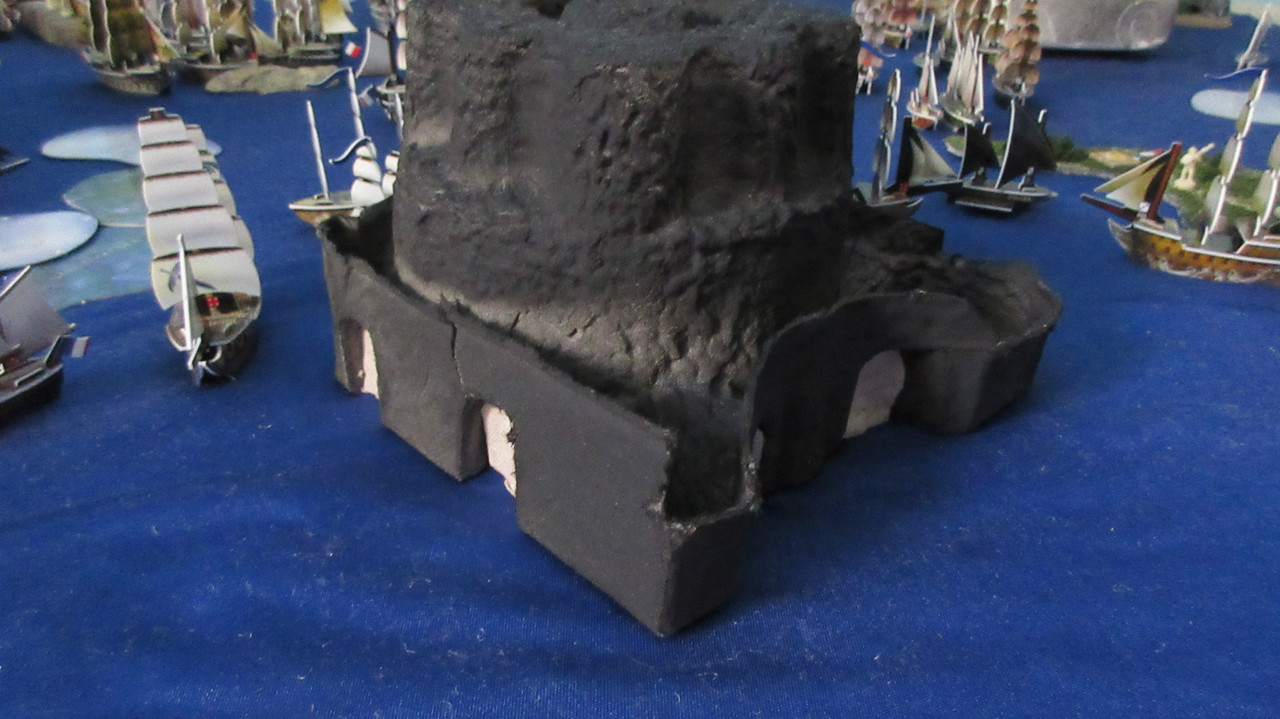 The French begin their turn. Finally coming to terms with the likelihood that the Mercenaries are no longer under their employ, Gaston orders the Aube to open fire! The big warship shoots at the sub hideout but the cannonballs simply bounce off the thick metal doors!! 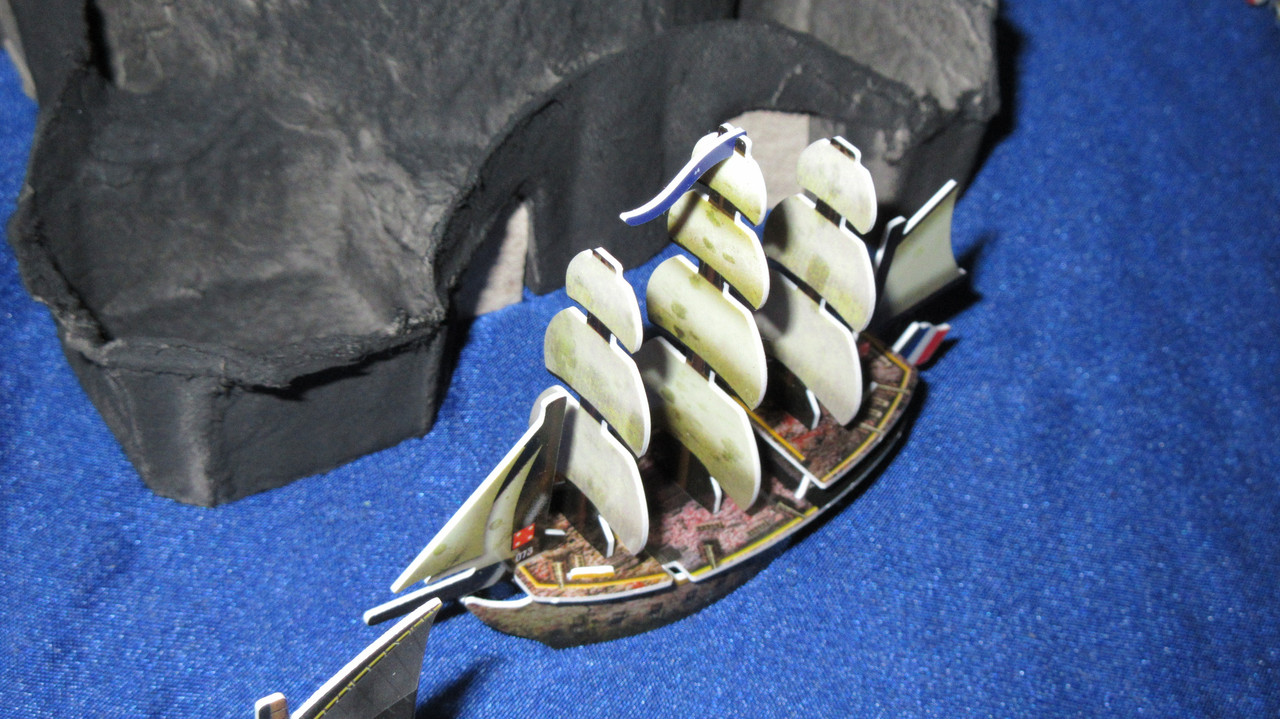 The French surround the sub hideout and blast away! However, the other ships can’t dent it or get at the subs either. Gaston plans to run a close blockade to contain the Mercs and punish them. 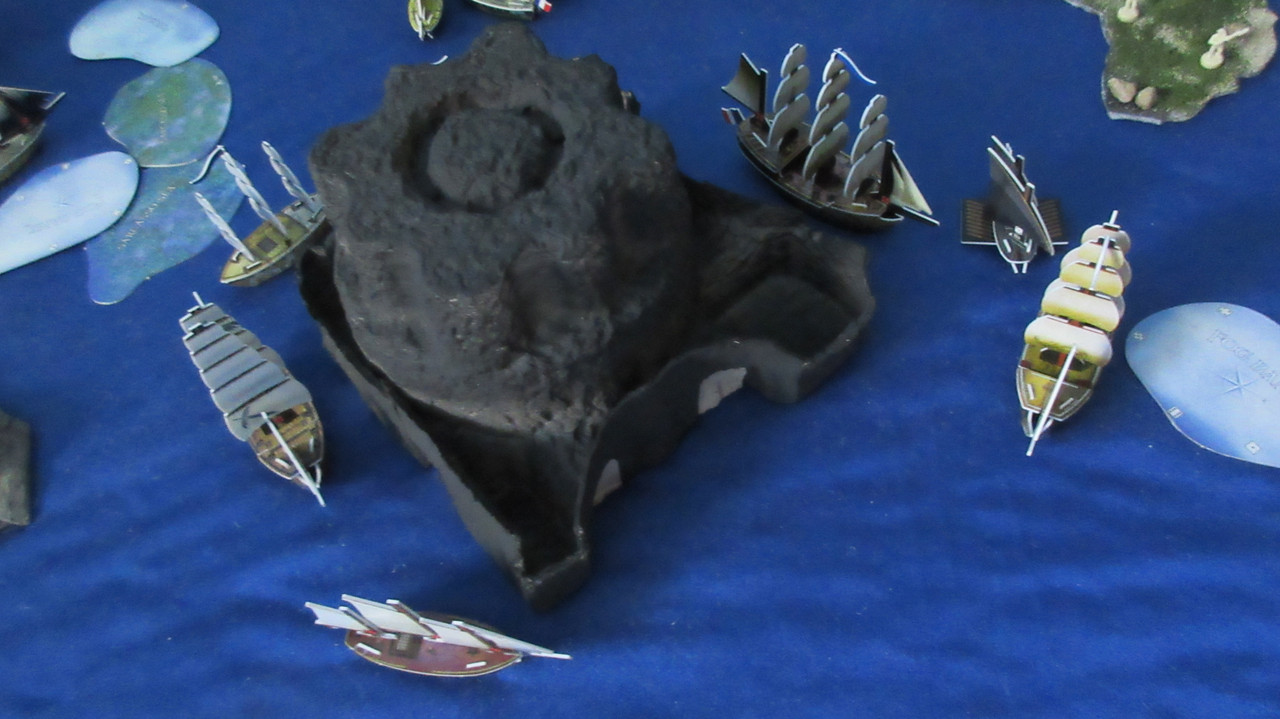 The French spend just over 200 of their 300+ gold to get 12 new ships! Le Loup-Garou is tasked with exploring other potential oceans, while most of the others are launched for war. Some may head to The Flat, while others might defend local islands or the Harbor itself. The Favori is meant as a dual-purpose cargo ship: she will carry resources, but will also be a priority ship for army units. (S2=shipwright, etc… I’m having to use tiny crew chips instead of any existing ones (though I’ve mostly run out of those too) just because of space constraints… with the tiny ones I can fit many more deckplates in those areas than if I had the big square chips for all the crew) 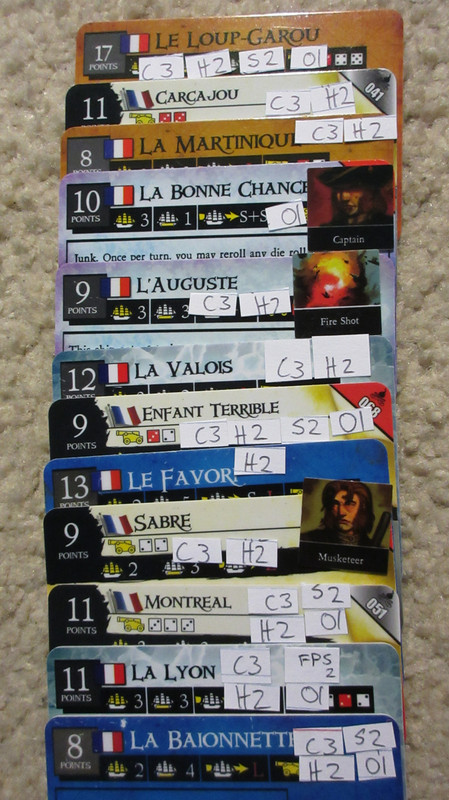 6 of the ships are launched in the Harbor, with the other 6 launched at The Flat. 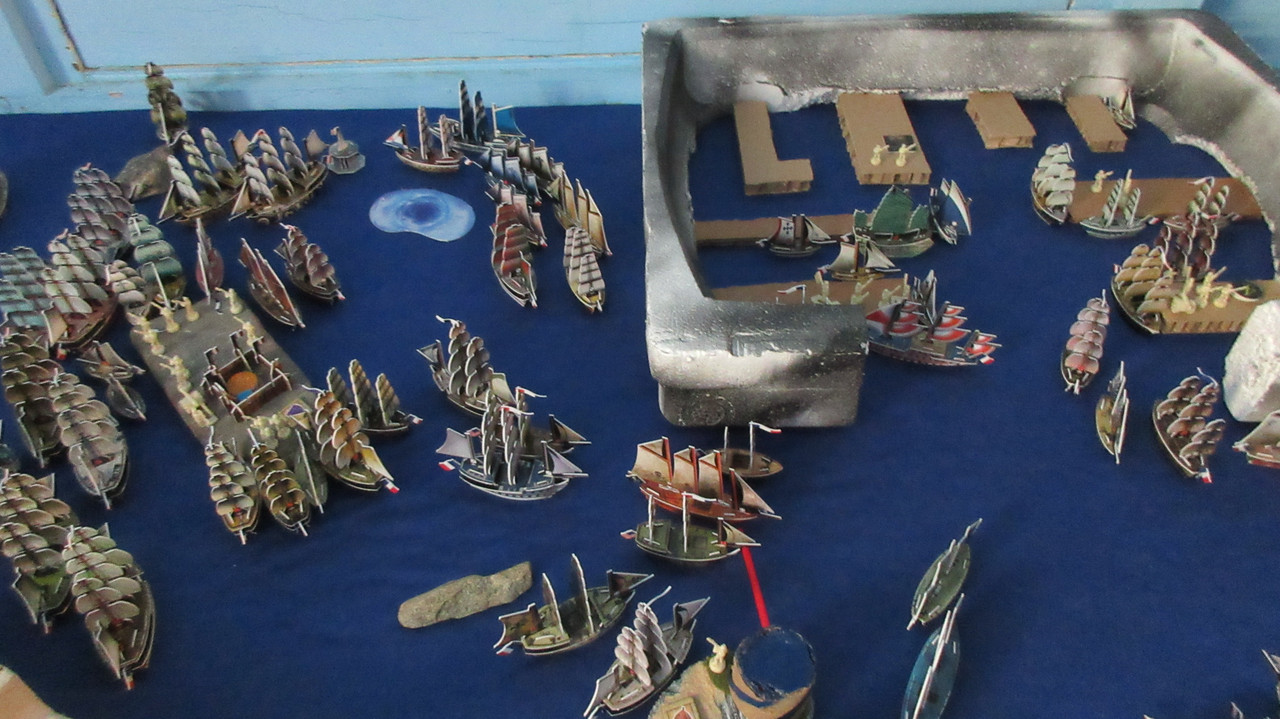 The Americans open fire on the Pirates! They also attempted to surround them, but don’t have quite enough gunships in the area to fully contain them. The Americans concentrated on stopping the Pirates from going due north on their next turn, which would be problematic with many cargo ships and the American HI nearby. At the right, the James Madison has knocked out a reef, giving the Americans easier access to the Castle! 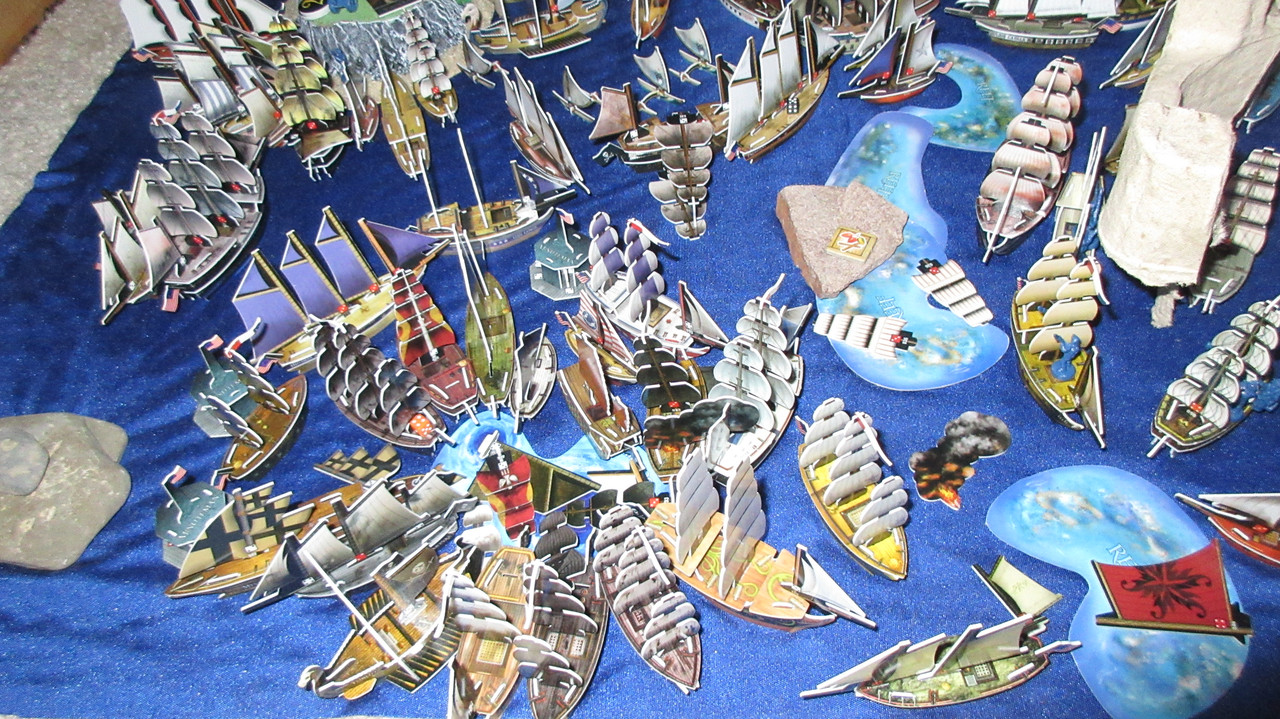 Under Preble’s urgent command, the President scored some hits on the Xiamen’s Claws, the most offensive invader thus far. The Americans are furious a Pirate ship was able to invade and strike Preble’s ship directly. In a rare sight, the canoes are given a shoot action, and they respond with 2 hits in 3 attempts. At the right, the Nene-nui and Enterprise head to the Castle with army units and an important fort upgrade. Above the President, the Colonial Trader simply sailed in the opposite direction she had been heading, in order to make room for the Concordia. That ship and others will try to enter the fray next turn. 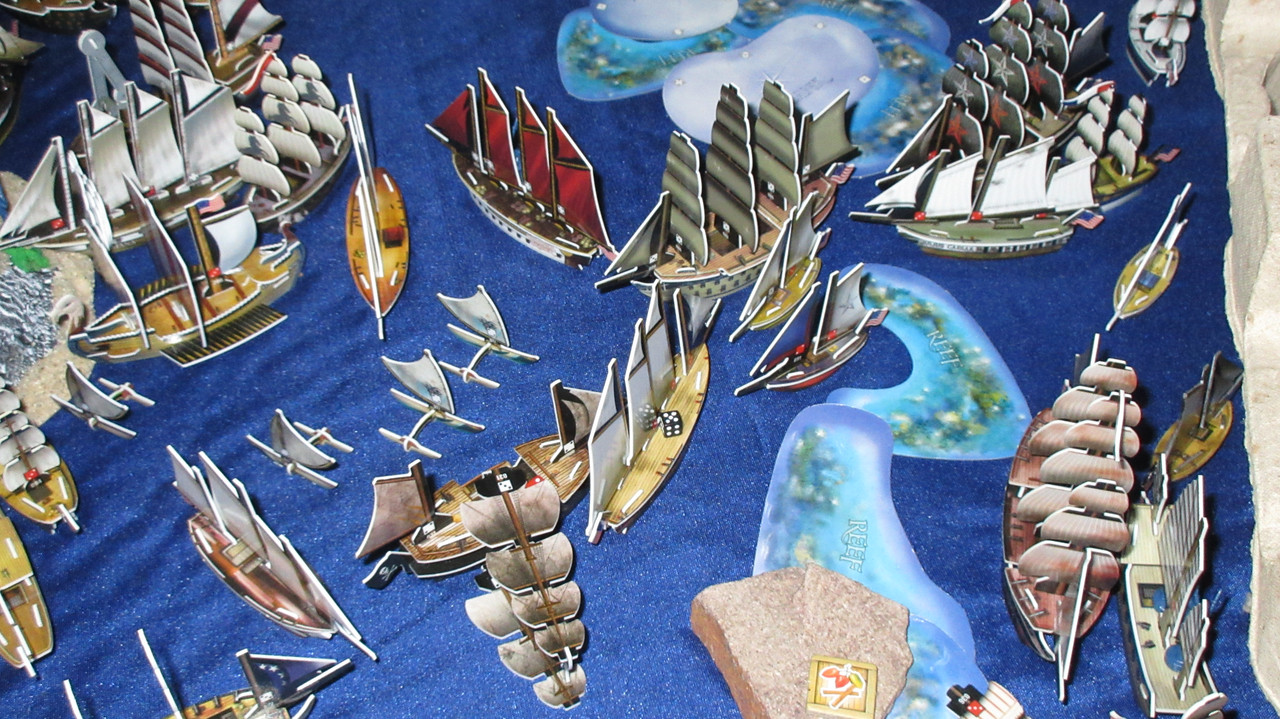 However, in the actual battle area, the Americans had an abysmal turn at the guns. I can honestly say it was one of the worst single-turn offensive efforts in the history of my games. An absolutely pitiful performance, it left the Pirates in good position for a counterattack for their turn, and may signal a momentum shift compared to the first Pirate-American battle. At its worst, the turn saw the Americans not just missing, but missing badly. One string of six shots saw five of them miss with a 1! O_O 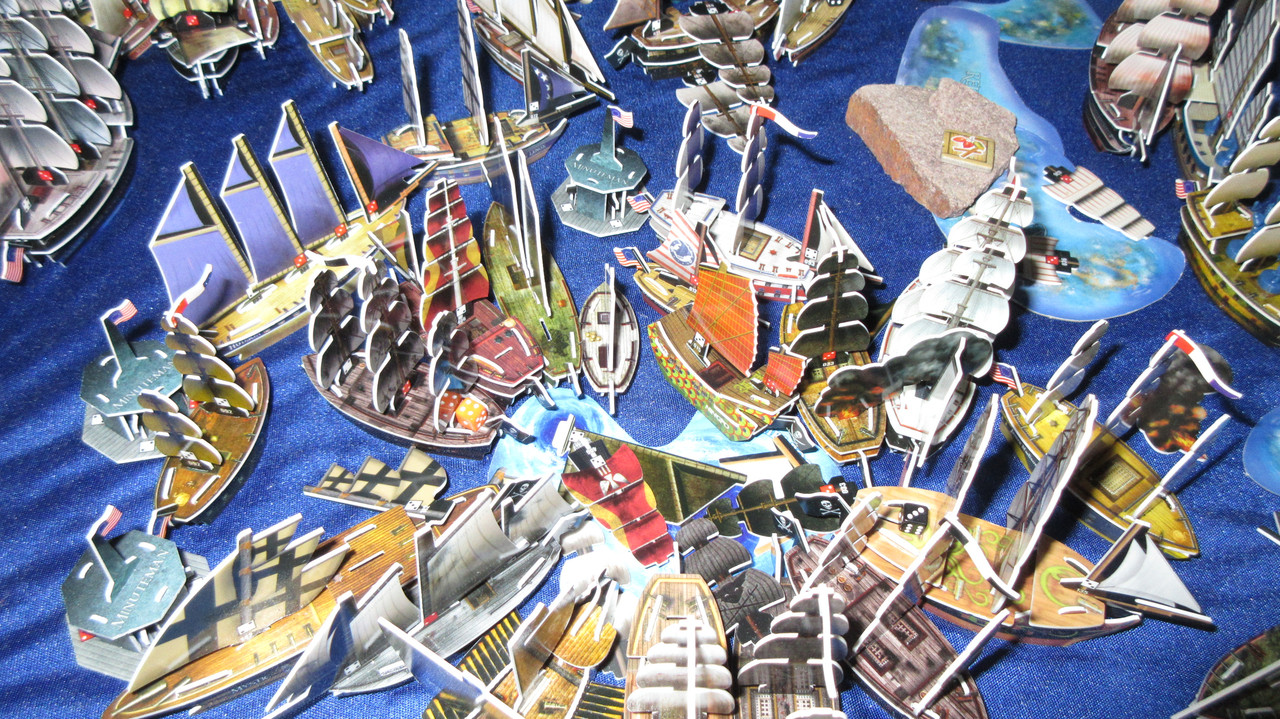 At the bottom, numerous American gunships turn around after hearing the commotion to the west. The Mercury will guard the southeastern approach to the Castle against the French and/or Mercenaries. In the middle, the Carolina has unloaded the first American troops to enter the Castle! The Jackson will unload more next turn, with 3+ additional ships headed there as well. 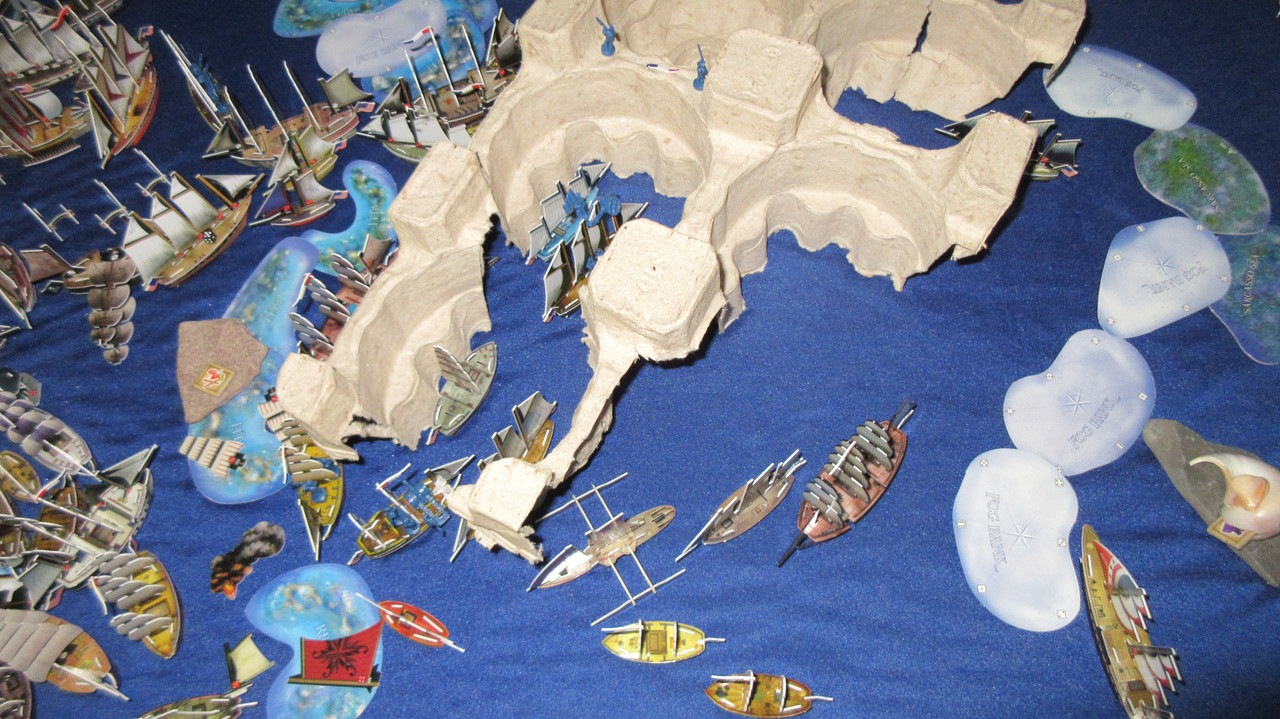 Going on a big launch, the Americans put forth 10 new ships! This was a direct response to the Pirates’ second invasion through the whirlpool. The fully repaired Pirate gunships were traded in for their point values, combining with their crew to make up 105 of the ~200 gold the Americans spent. Notice some of the best American ships (Kettering and Ghost Walker) and some of the worst (Oregon, Shark, Superior, etc). It was a bit of an odd launch, but for a good reason: the Americans are running out of ships. That’s right, this game has gotten to be so big that some factions may even run out of ships to launch! O_O In that case, there are still minor faction ships out there in addition to various customs, so it’s not like a faction will lose the game due to lack of quantity. However, as more and more factions approach the point at which they exhaust themselves, the biggest factions in the game by overall ship count (Big 4 of English, French, Spanish, and Pirates) do gain somewhat of an advantage long-term. 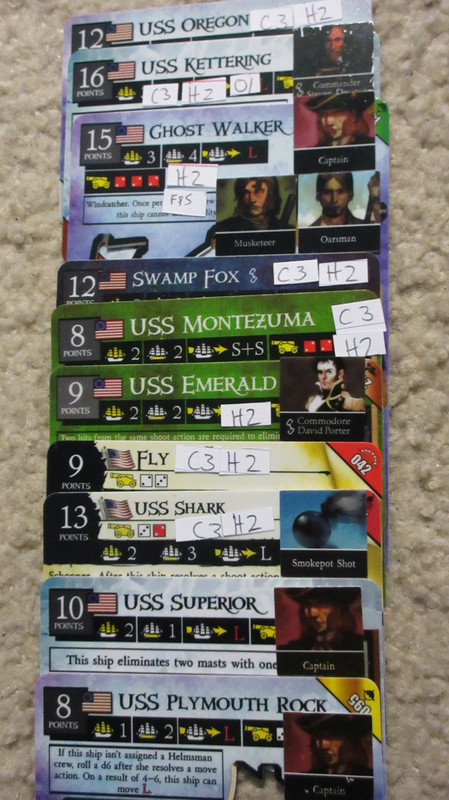 The repairing Ranger is the only Pirate capture not traded in yet, as 10 new American gunships prepare to take on the Pirates. At the upper right, an ominous sight for any opponent: the newly repaired Albany and Constitution have headed out, bringing their 9 combined rank-2 cannons back into play. 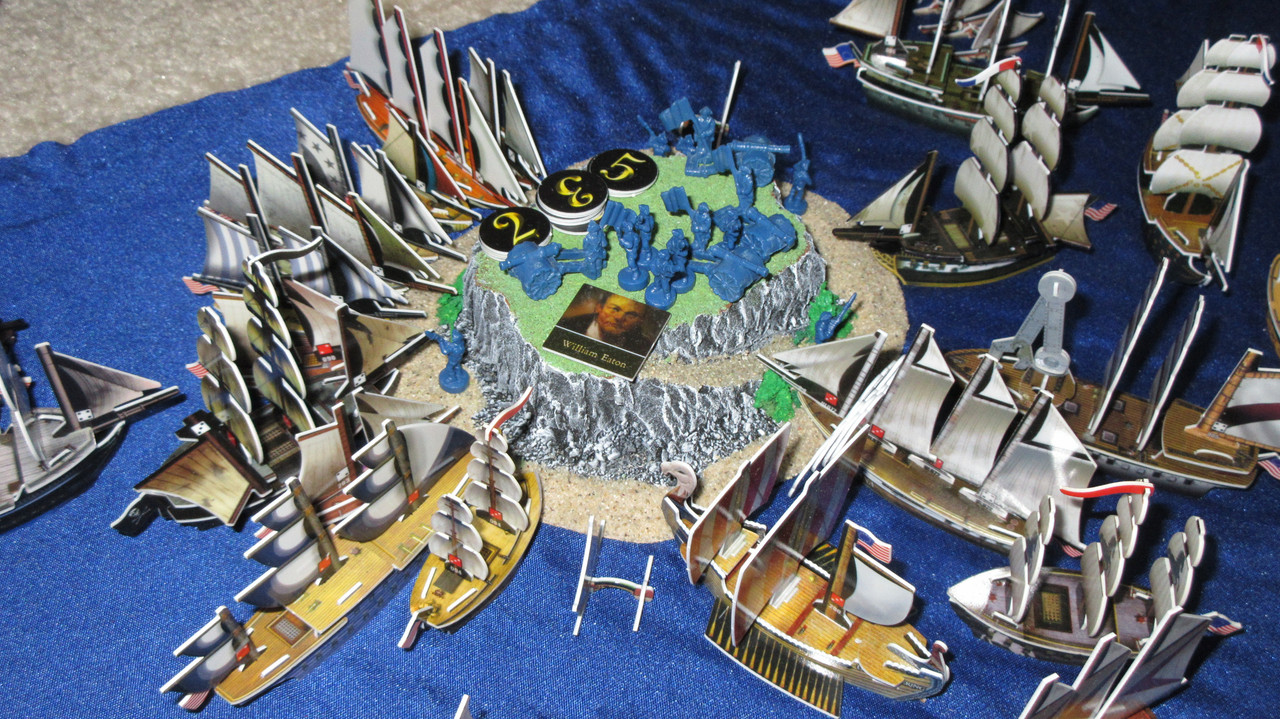 Darkness falls on the Sea of Allost as Turn 65 begins. I didn’t roll a 1 for a random resource change, so lumber is worth 6 again, though the roll of 2 will only hold for 2 more turns. The Tunnel is becoming quite crowded, with the Akua Lapu (not visible), Celtic Fury, Crusher, and Fleur de la Mort all entering.

Up north, the newest Pirate squadron sets sail for the whirlpool! 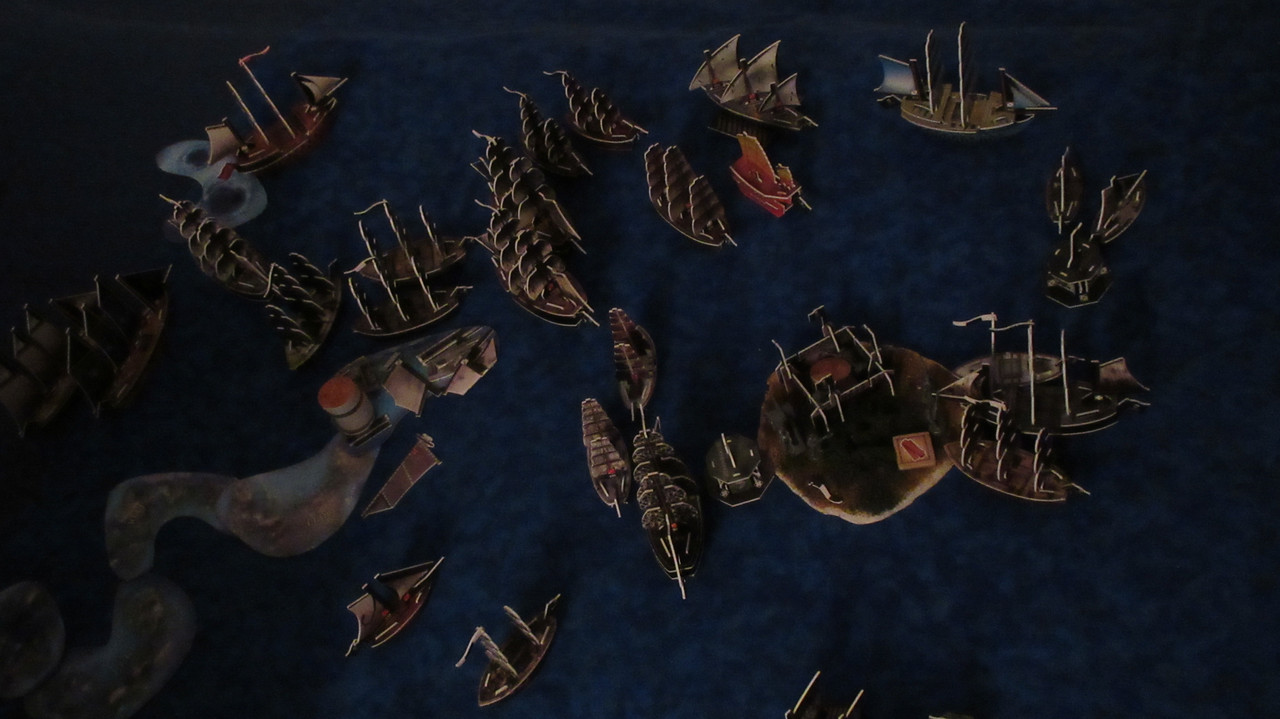 Back to Karkuda! The Pirates attack! Attempting to push the Americans back in order to make room for new gunships arriving via whirlpool, the Pirates suffer almost as bad a turn as the Americans. They fail to do major damage, although the Lenox is set on fire. 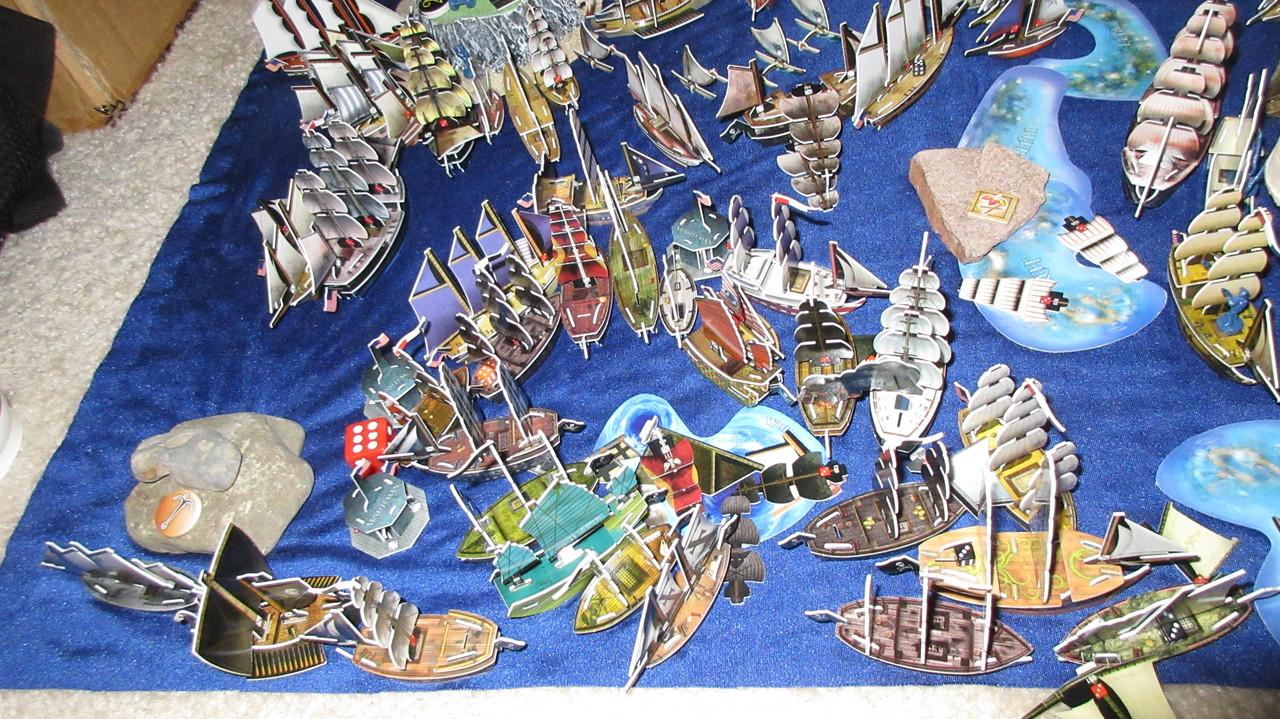 The Gruesome, Minerva and Devil’s Kiss all rammed. This battle could see more ramming and boarding than others, since even though no ram damage makes it less of an offensive move, the battle may be even more crowded and close-fought than the previous one between these factions. In this case the Pirates are literally just trying to surge forward and push the Americans back towards their HI. The more room there is around the whirlpool, the more Pirate gunships can flood the area and make a victory more likely. 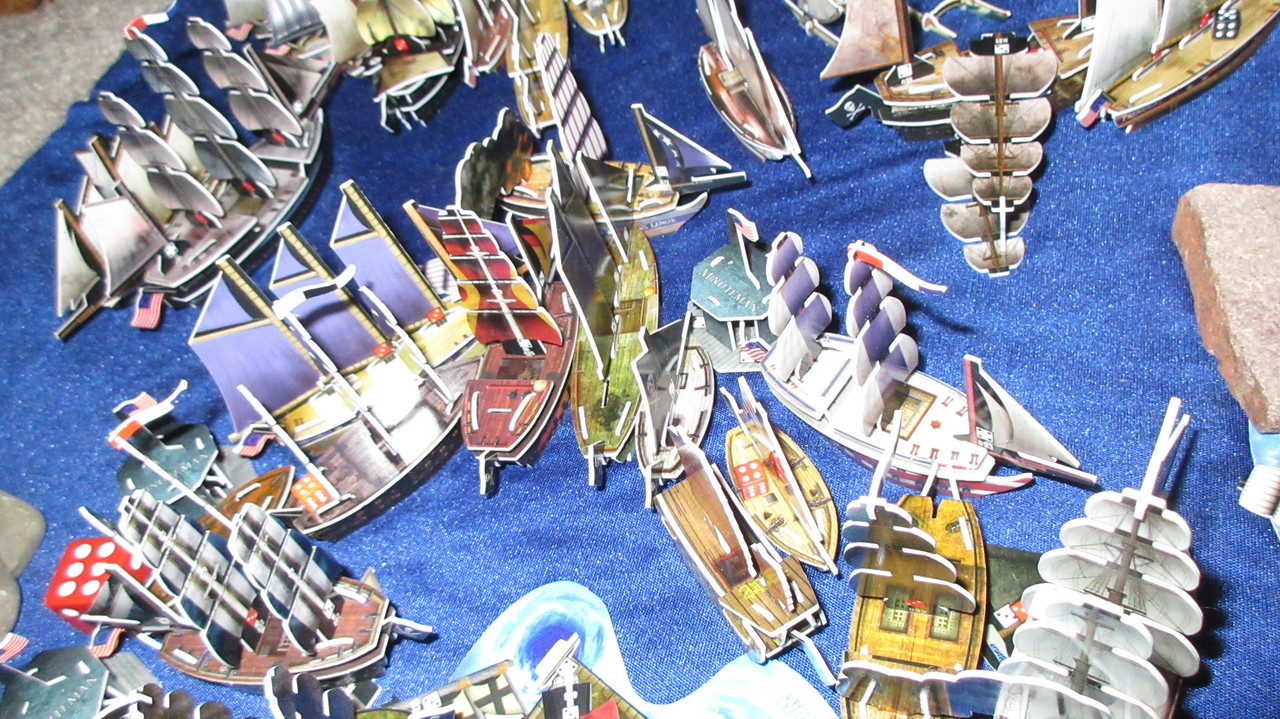 My personal favorite of the battle so far. The Devil’s Kiss and Georgetown are burning, while fallen Pirate masts threaten to cover up the whirlpool entirely. The Lucky Seven has been the luckiest Pirate ship in the battle so far, hitting 3/4 (with a musketeer) against the Georgetown. However, the Freedom, Black Cat and Ningpo were not nearly as effective. 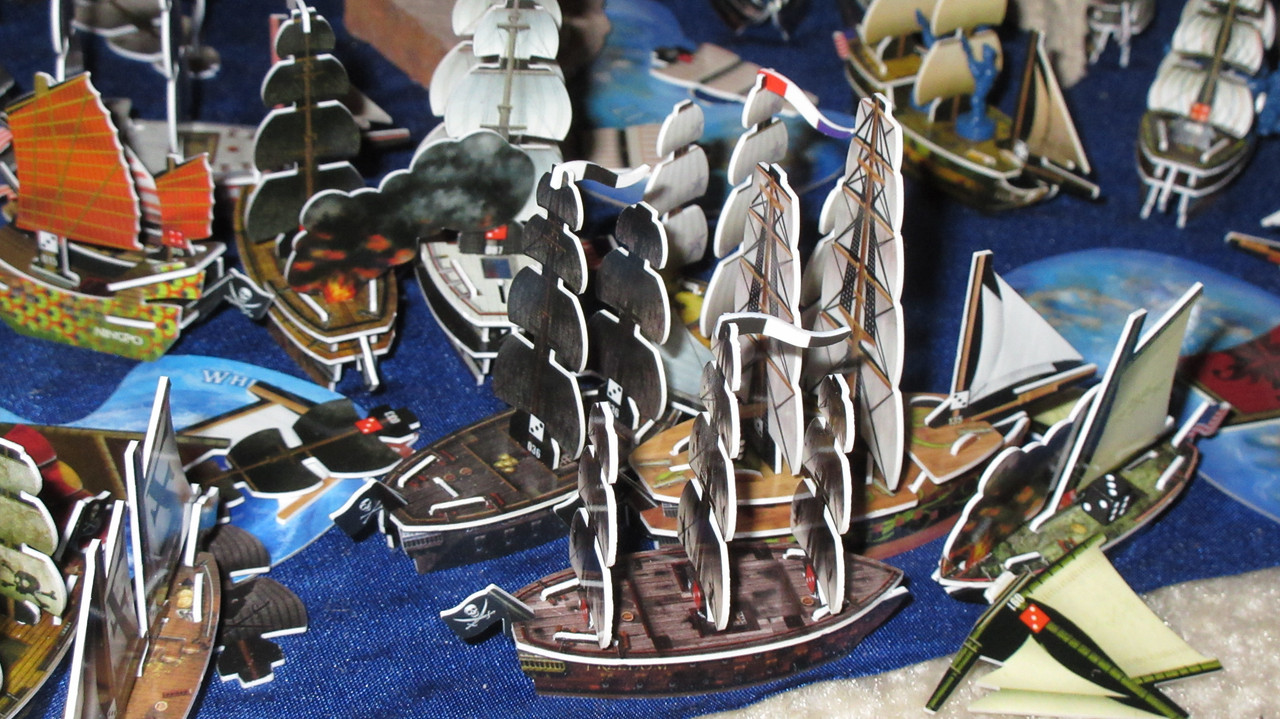 Four more mediocre Pirate gunships come through the whirlpool! However, the final ship to emerge is a surprise: the Queen Anne’s Revenge! Blackbeard himself enters the fray, using an EA from Sean Gallows to ram the OE James Madison. However, the QAR missed, and the JM managed to tie the boarding roll with a 6 (9 total with the boarding bonus) to avoid having a crew captured! At the bottom left, two Pirate HI raiders go through the opening south of Luck Island, and El Dorado follows them. Having suffered heavy damage without even shooting, the Mystic has returned to Pirate waters where she can repair at Dead Man’s Point. 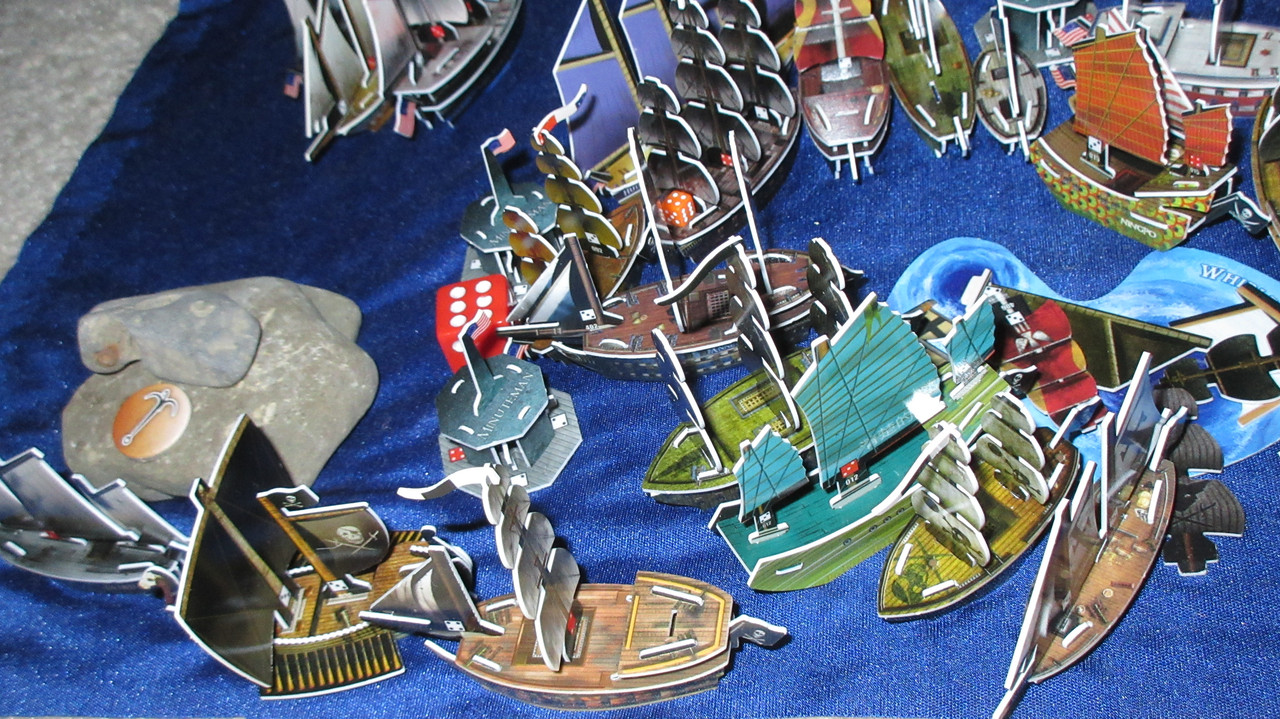 Showing they mean serious business, the Pirates spend 230 gold on a megalaunch! A full dozen ships are launched at Dead Man’s Point, and ALL of them are launched for the war against the Americans. The Pirates bought back the 7 ships the Americans had traded in, so they will get another chance at glory. The Mocha, Cacao, and Pillage are all pretty basic gunships that follow the trend the Pirates have set in recent launches. However, the Pride is one of their fastest warships, while the Belladonna adds another HI raider to the mix. Notice that they are extremely well-crewed, with every ship having at least one extra crew in addition to the standard captain and helmsman. Those oarsmen and shipwrights will come in handy to combat whirlpool travel damage, while the firepot specialists may mean a permanent end for some American vessels. 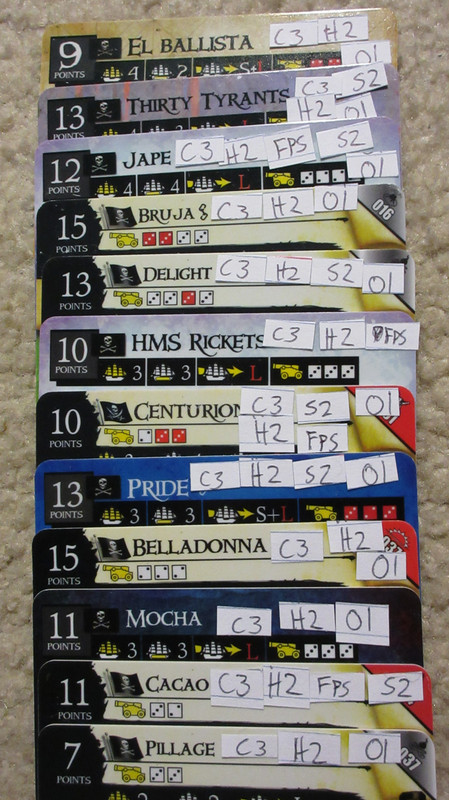 Yet again Dead Man’s Point is extremely crowded. The Pirates have an amazingly balanced and effective resource system, and they continue to put out squadron after squadron of new ships. They continue their strategy against the Americans: throw huge amounts of points at the American fleet and they will have to retreat or be worn down into surrender. Some Pirate ships will reach the whirlpool next turn, with more coming after that. Then, another big wave will arrive. All told, the Pirates may throw over 30 ships at the Americans in this multi-layered battle. It will be interesting to see if the Americans can hold up over time, and if they will be able to continue their Castle operations or cease them altogether. The French aren’t fully aware of the Pirate attack, but an alliance exists between those two. If the Pirates can convince the French to break their truce with the Americans, the Americans will be in big trouble, with two of the strongest factions in the game hammering them from two angles. 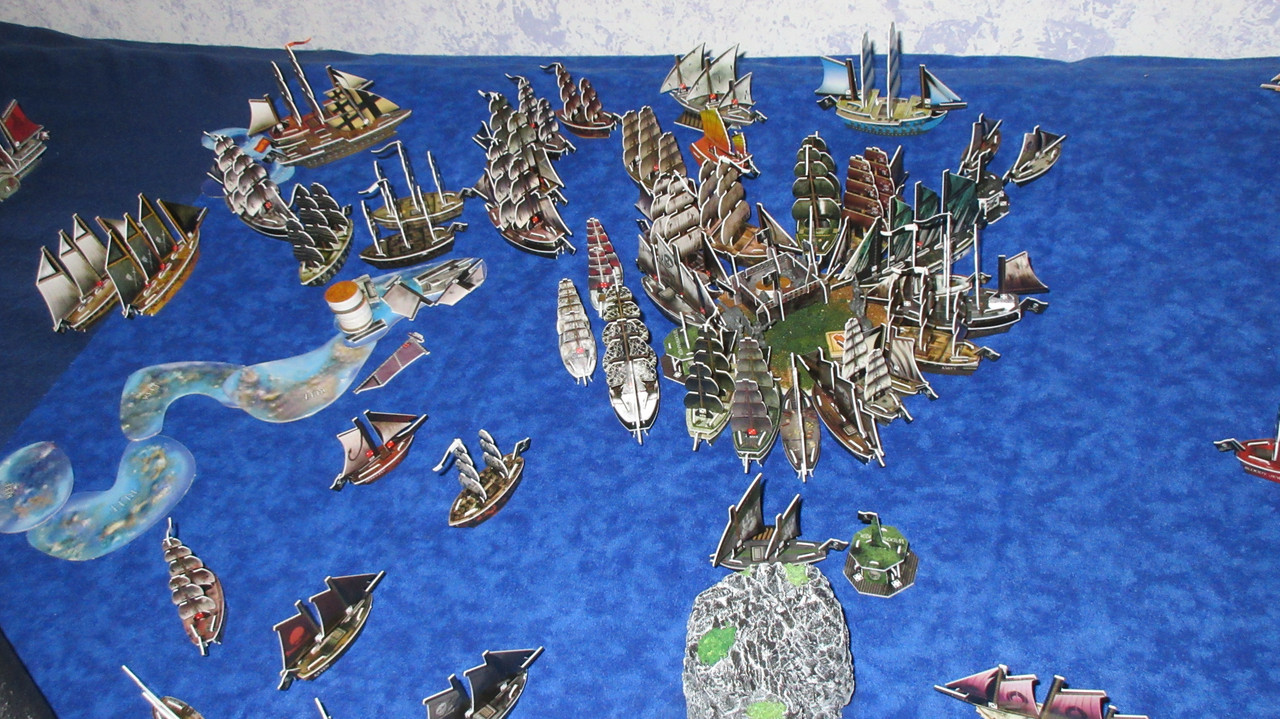 An overhead look at the fort, with 12 new Pirate ships in play. At the upper right, the Fancy and Smiling Jim have been running resources all game (literally, since they were in the starting Pirate fleet!), but now they have been given captains and will be on patrol duty. The logjams at the kingdom entrances are not worth 2 ships having just 3 cargo spaces between them, as recent Pirate launches have seen more effective cargo ships launched. 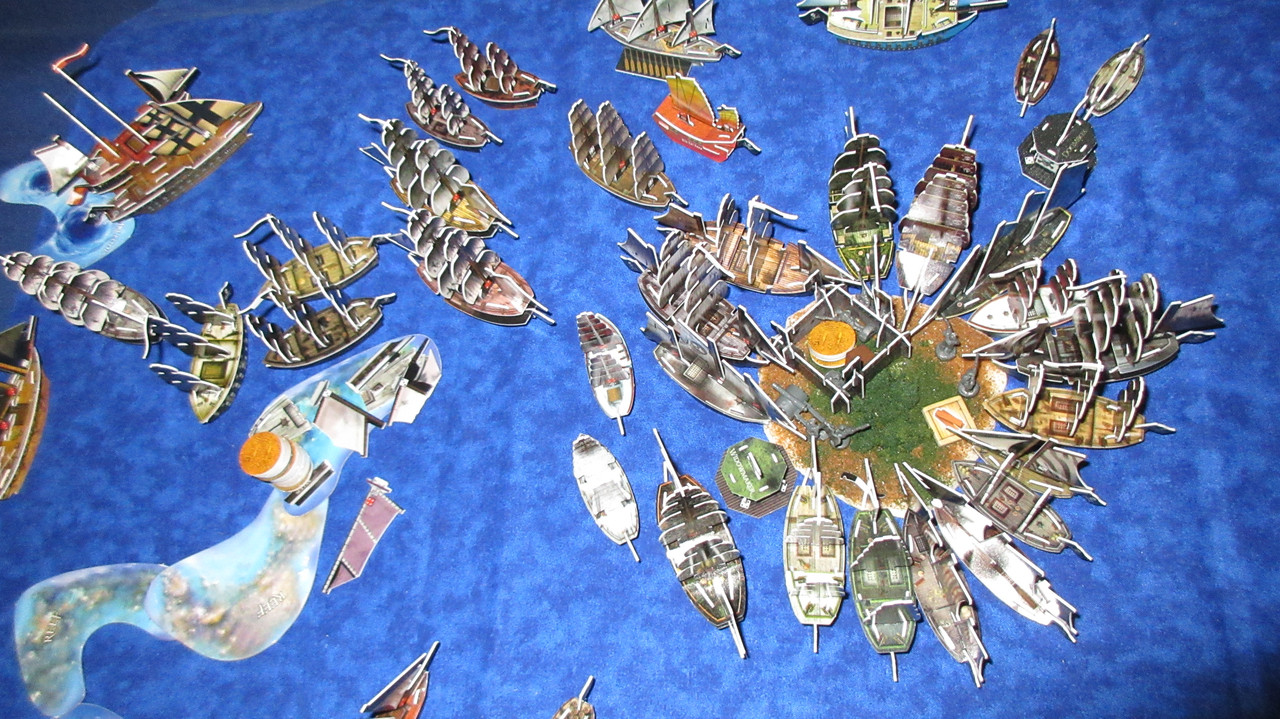 These events took quite a while to play out, with the three largest factions in the game (France, America, Pirates) becoming even larger with about 10 new ships each! Some faction turns alone can take over an hour with launchings, so a full turn can take more time than I have available for this game in a day. The game keeps ballooning to higher and higher point levels, which will likely result in another point count within a week or so. However, keeping in mind the general deadline of Thanksgiving, I may have to enforce artificial endgame rules to avoid suddenly stopping the game when there is still thousands of points sailing around. This is because I know from past experience that playing an “endgame” with a game of this size could easily take over a month alone, not to mention if it gets bigger. The most likely solution would be to have islands gradually stop producing resources. I feel that this actually makes sense too, since factions have really been taking a lot of stuff from these wild islands lol, to produce such astronomically large fleets. XD