Was listening to some Tchaikovsky while I wrote this, and I suppose it would work for reading as well!

The Cursed had another uneventful play turn, but continued moving their ships west towards the edge of the Sea of Allost. 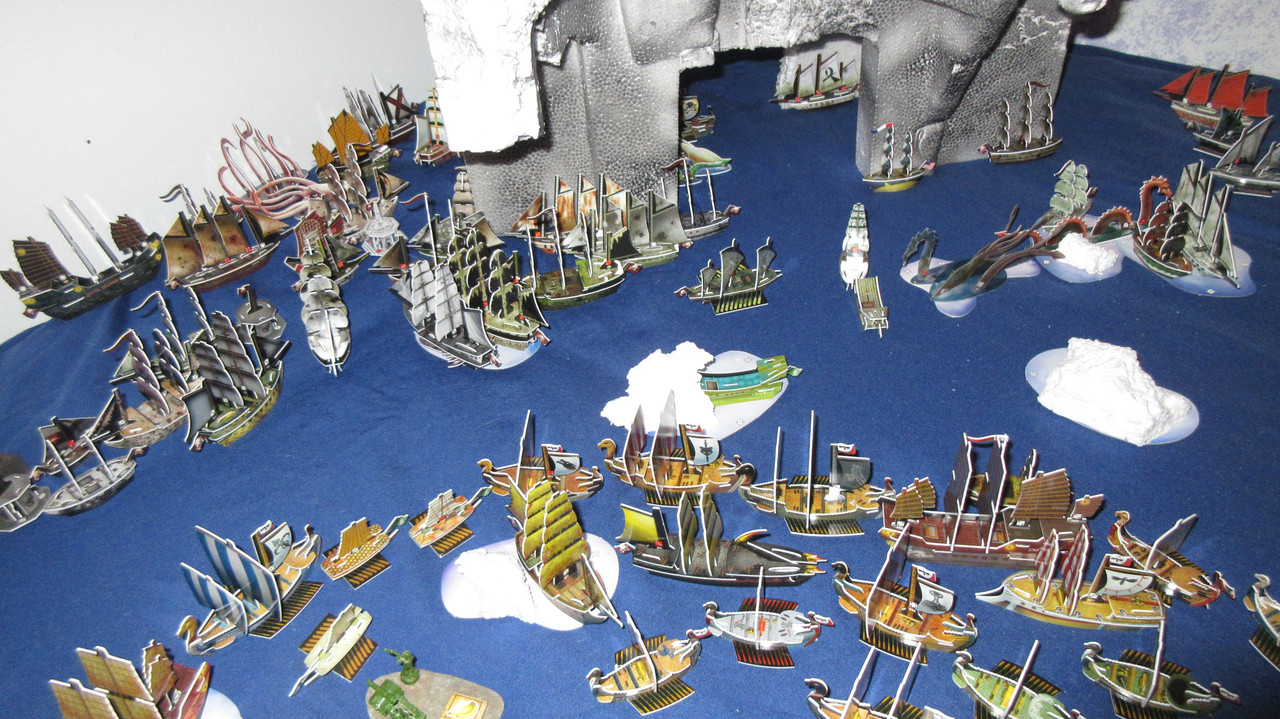 However, that picture doesn’t show what they launched! The Guichuan is here!! Possibly even more importantly is who comes aboard to helm the ship… 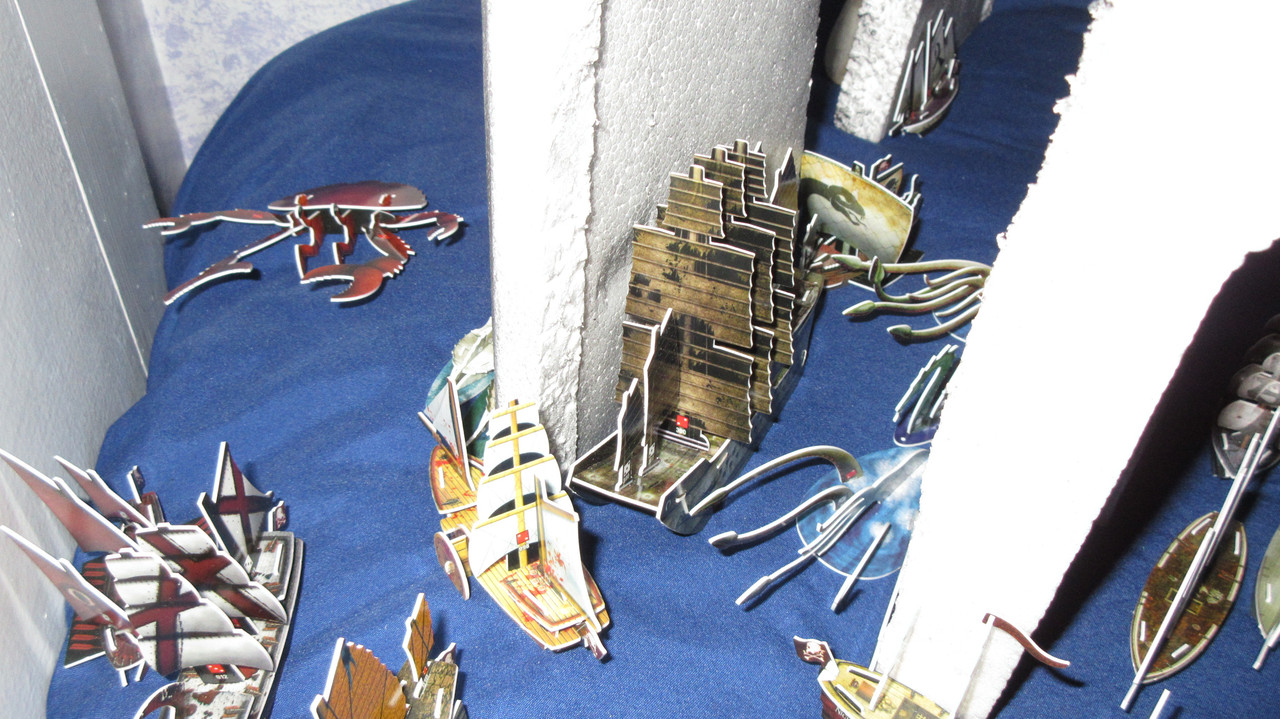 … DAVY JONES!!!! The DJC version of Davy Jones comes aboard the second 10 master to enter the game. He will partner with the Headhunter to make a very imposing ship. In addition, since the Cursed have the Eye, they can see any ability on any of the three oceans, which means that DJ will be able to copy ANY ability, not just ones the Cursed have been exposed to! I wanted to add more named crew to the ship, but with the Headhunter/DJ/captain/helmsman quartet coming in at 23 points, there wasn’t a lot I could do. Various generic crew will make the ship more of a threat, including being an 11-gun ship. The Locker and Pyre are also launched with some crew. You may remember that Behemoth is also in play, but as I’ve done in the past with the Cursed during CG’s, they can have more than one Limit game piece in play at the same time. 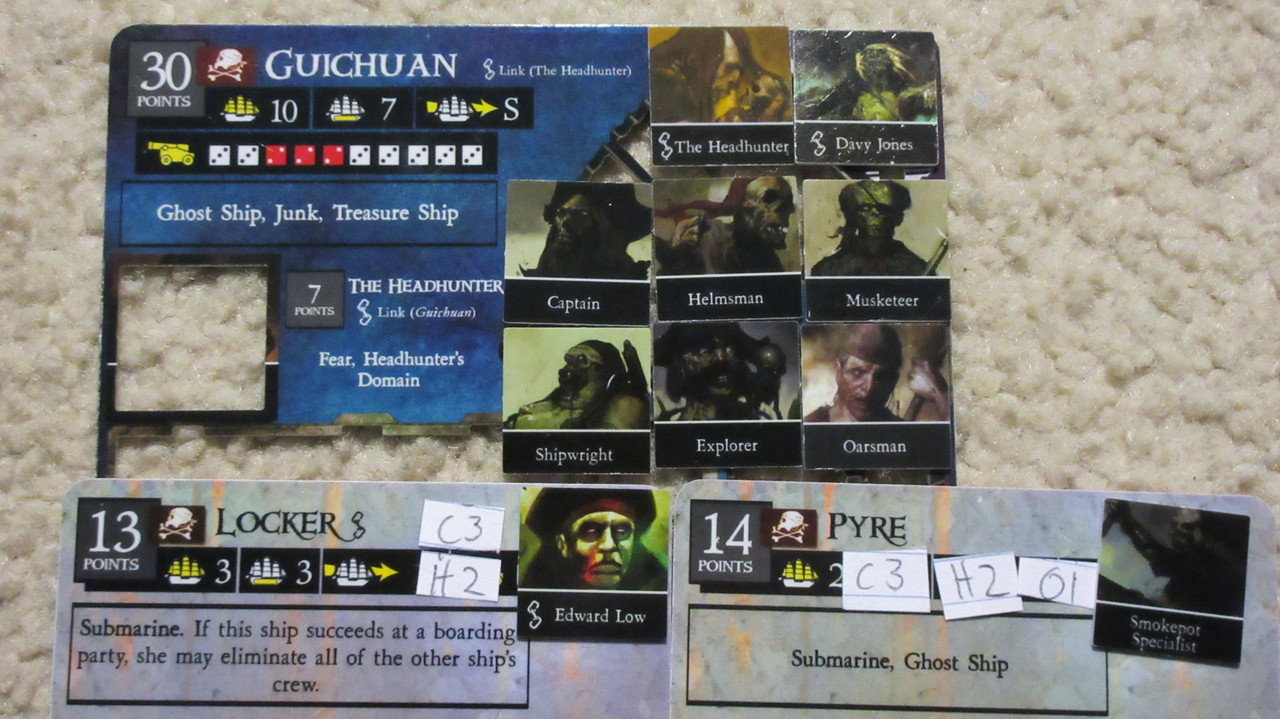 In the Caribbean, the English make way for the French and Spanish, both of whom seem to be in a hurry. The captain of the Metal Dragon speaks with Guy LaPlante, and the English try to form an alliance with the French! However, though LaPlante says an alliance is likely, he cannot guarantee Gaston and Lenoir will be completely on board with it (pun intended). 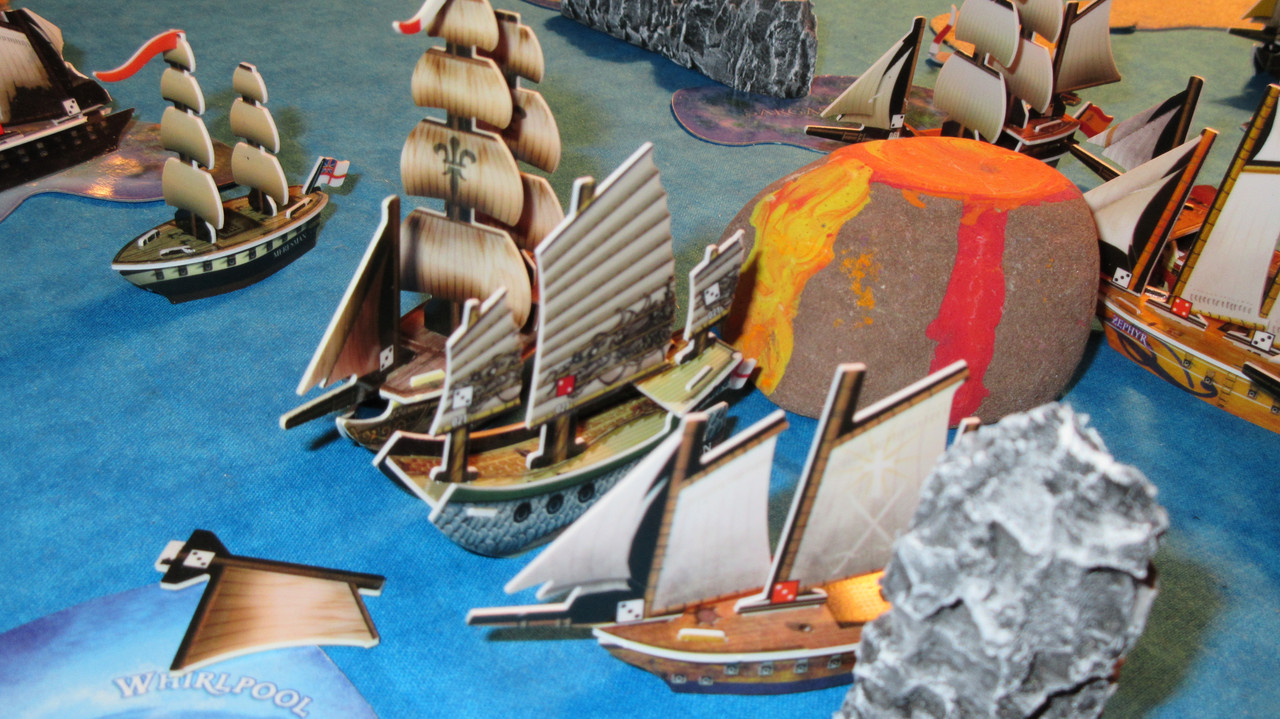 English ships surround the whirlpool, and their squadron of gunships will likely take the plunge soon! 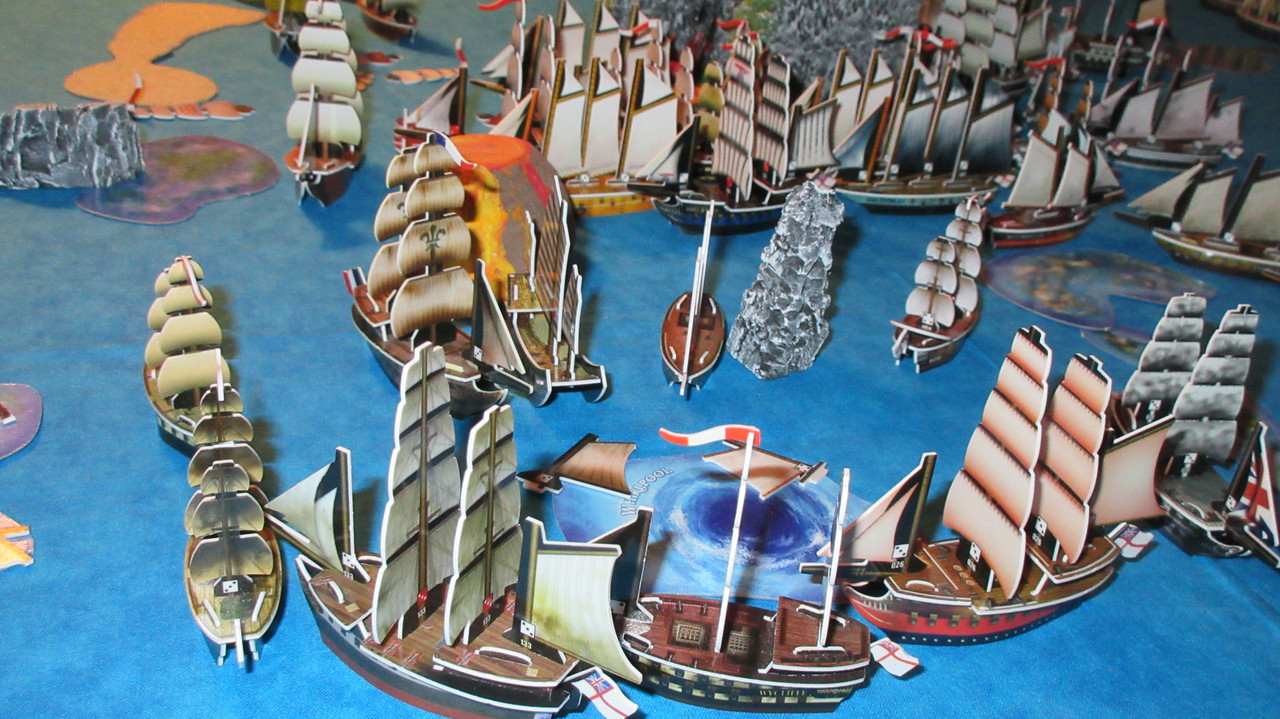 At this point the English have quite a fleet, but many of their gunships will likely depart the Caribbean soon. I’m a little sad that current circumstances may see somewhat of an exodus from the Caribbean, but I certainly haven’t reached the final part of the game yet, so I’m hopeful it will be active once more. 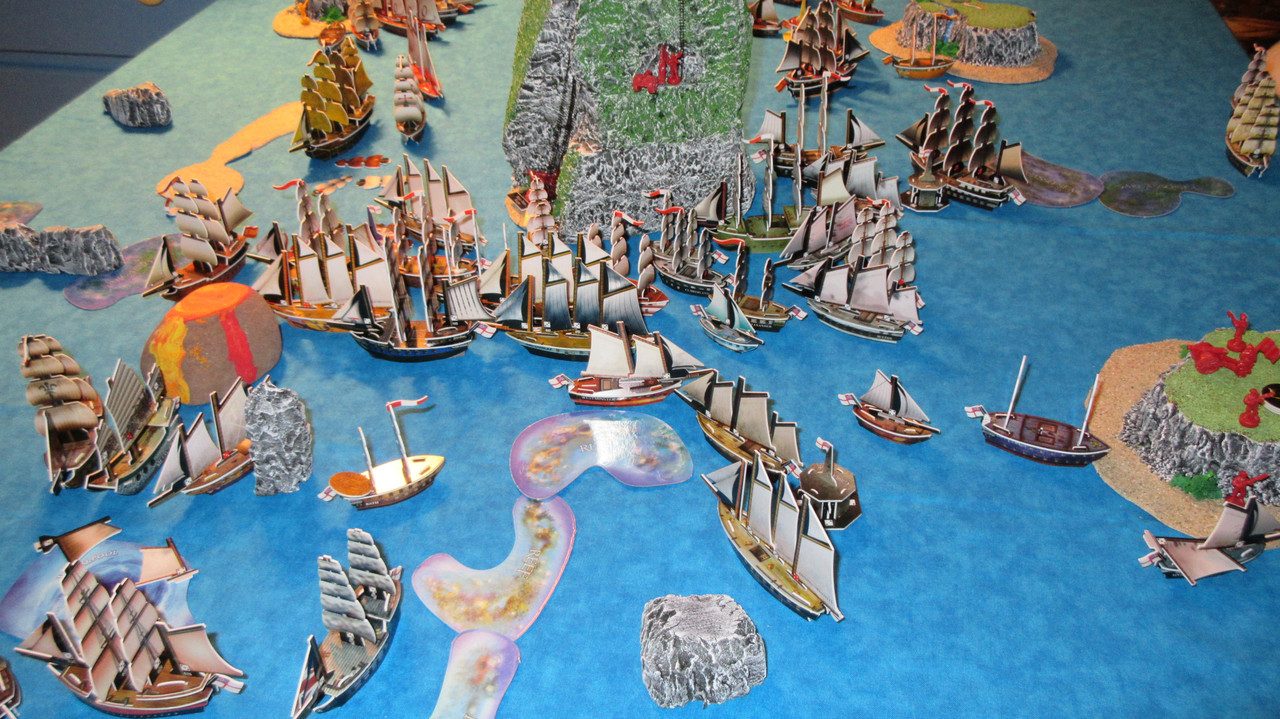 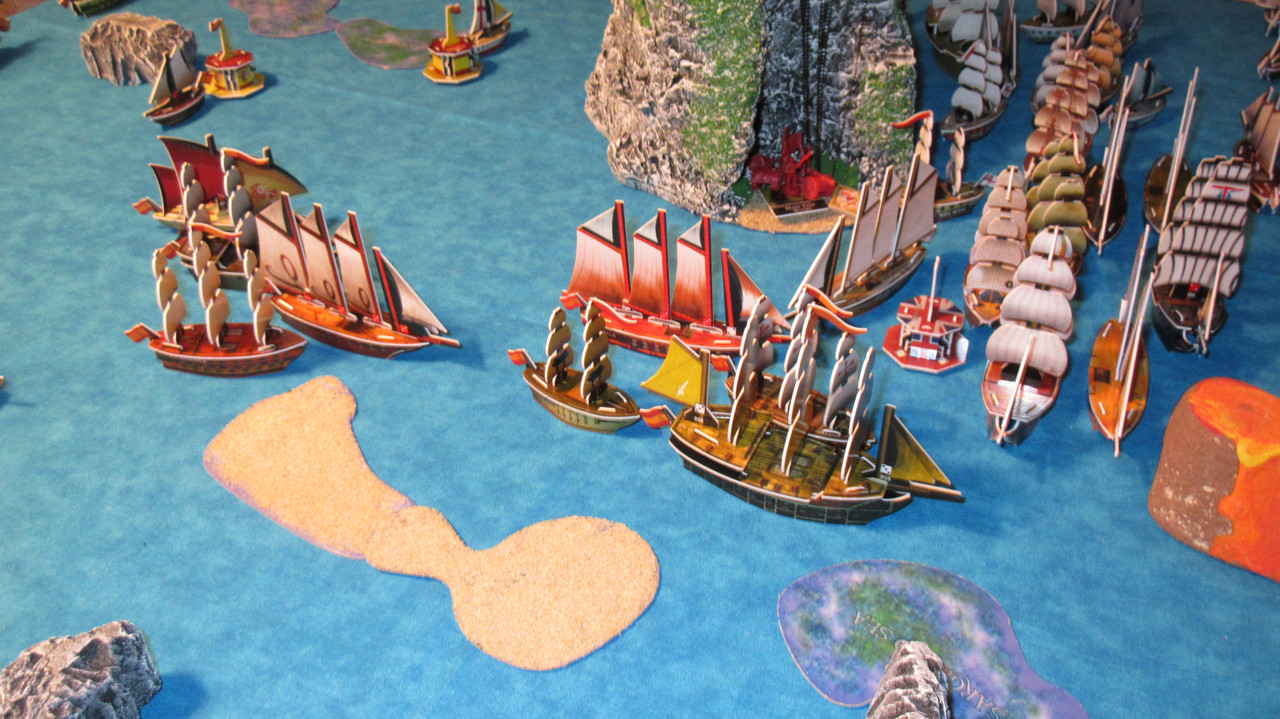 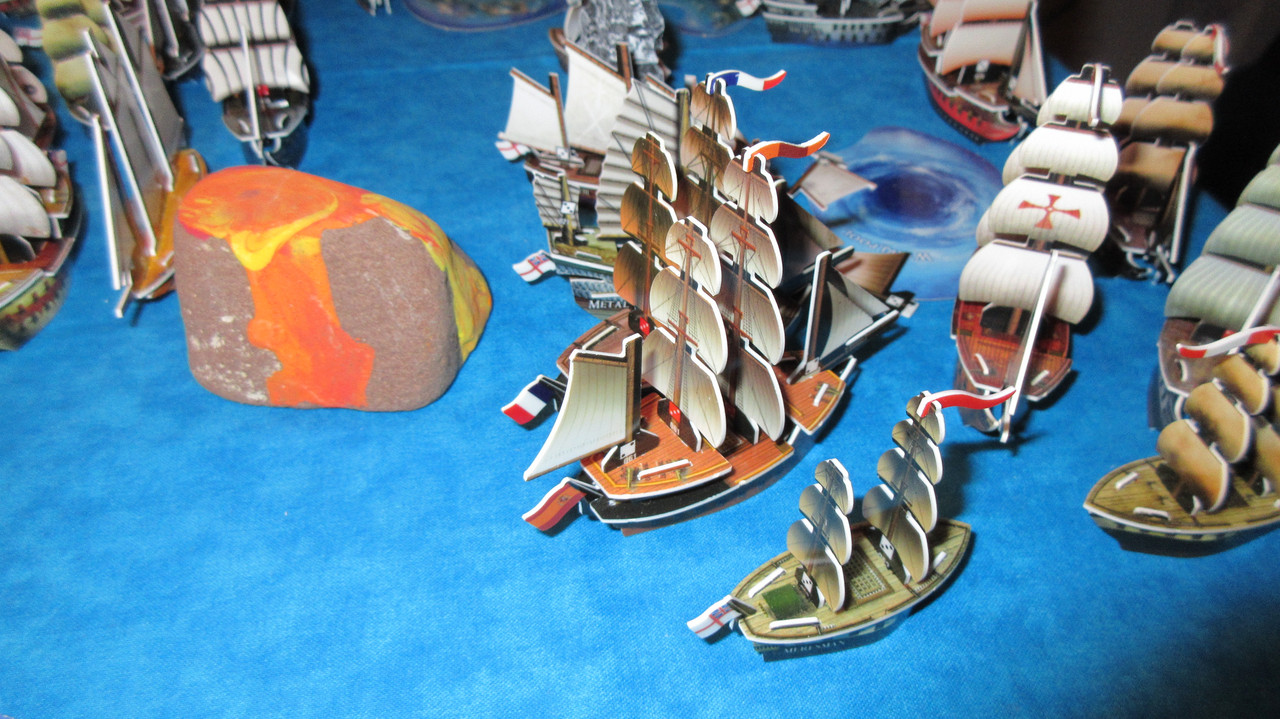 The French enact a close blockade of Nemo’s sub hideout! The French aren’t taking any more chances with the rogue Mercenaries. 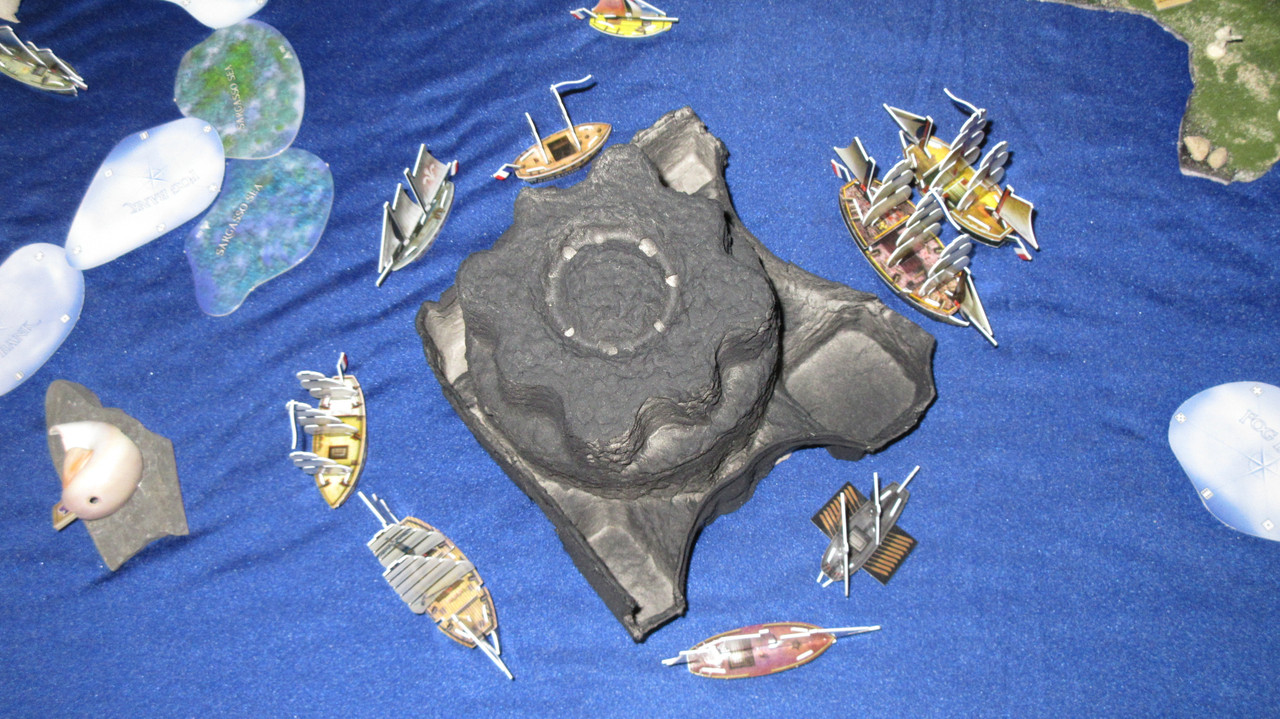 The captain of L’Ange de la Mer gets bored and explores the southeastern edge of Karkuda! Beyond my shipwreck cove, he spots a new wild island! 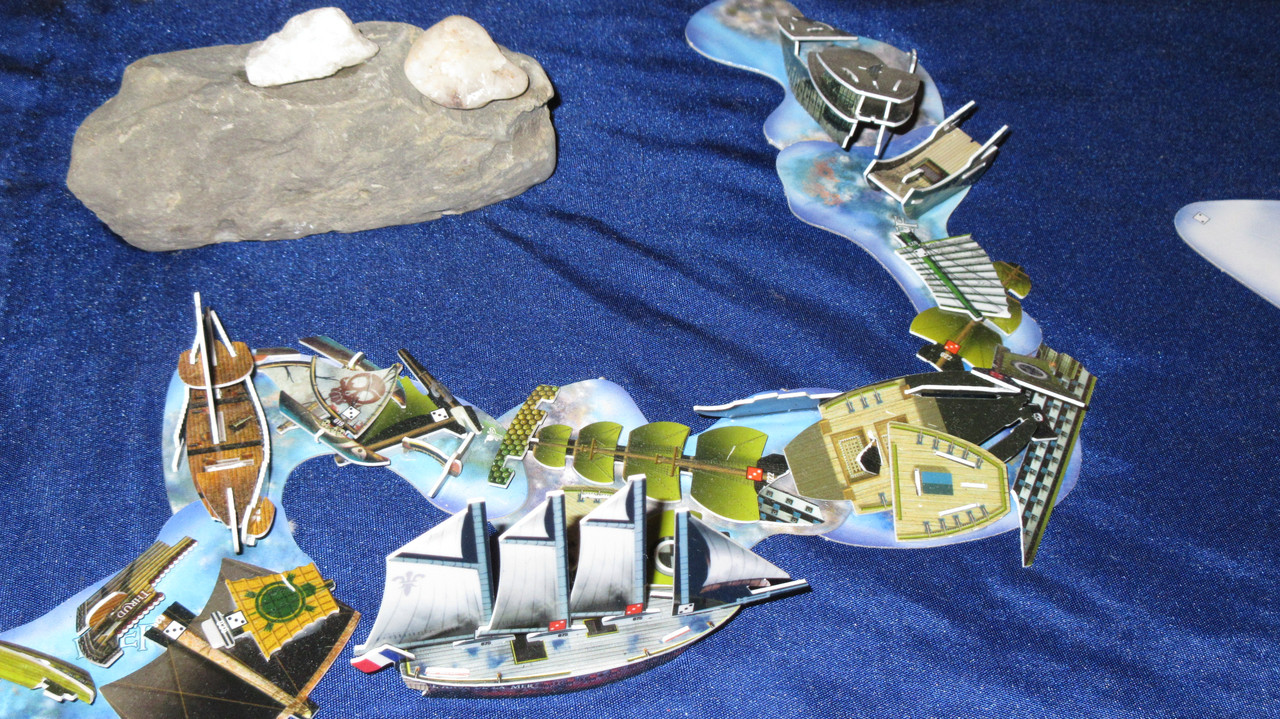 The French have a bit of a logjam at the Harbor. At the left, fortifications at The Flat are complete for now. The French now have 11 infantry units and 1 artillery unit stationed on the island in addition to the 5 cannons of Paradis de la Mer. Not to mention the 27 gunships defending the area on patrol duty. O_O XD Indeed, this French defense of The Flat is one of the most impressive displays of firepower I’ve ever seen in a game. At the whirlpool, the LLG (Le Loup-Garou) spins out attempting to find a new whirlpool. Next to her is the Possession, as LaPlante has returned from his important Caribbean excursion! 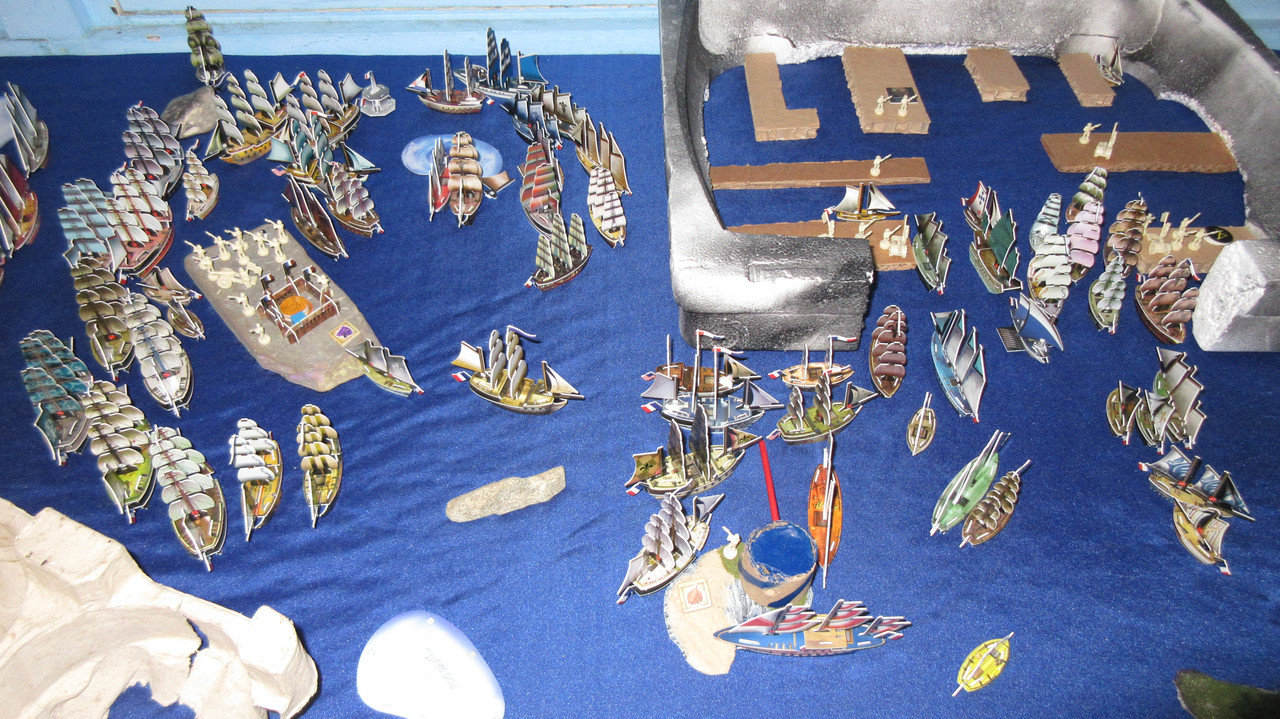 And now for the American turn. XD

The Americans have troops at the Castle! The Jackson and Nene-nui unload infantry and artillery, while other troops make their way to the ramparts. How exciting! 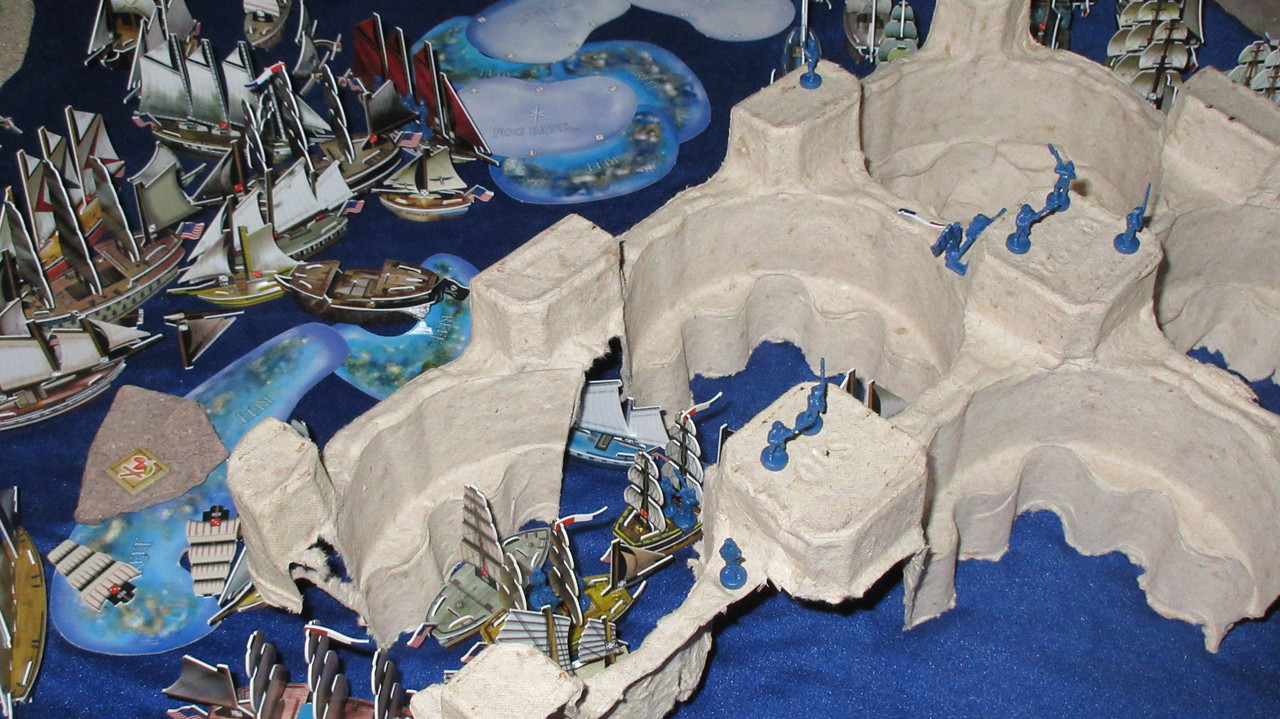 The Atlanta and Bartlett have more army units coming soon, while the Carolina takes a shortcut to leave the Castle. 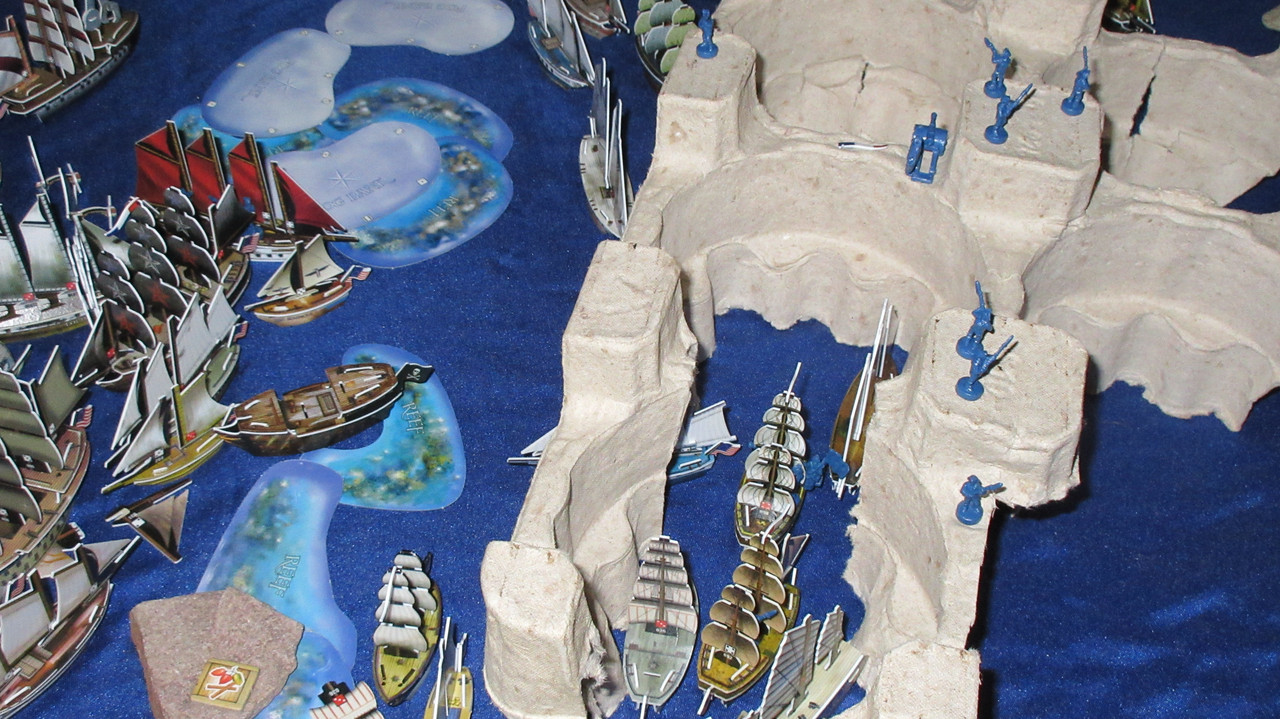 Carolina coming through, with the Atlanta’s name visible along with the artillery unit she’s carrying: 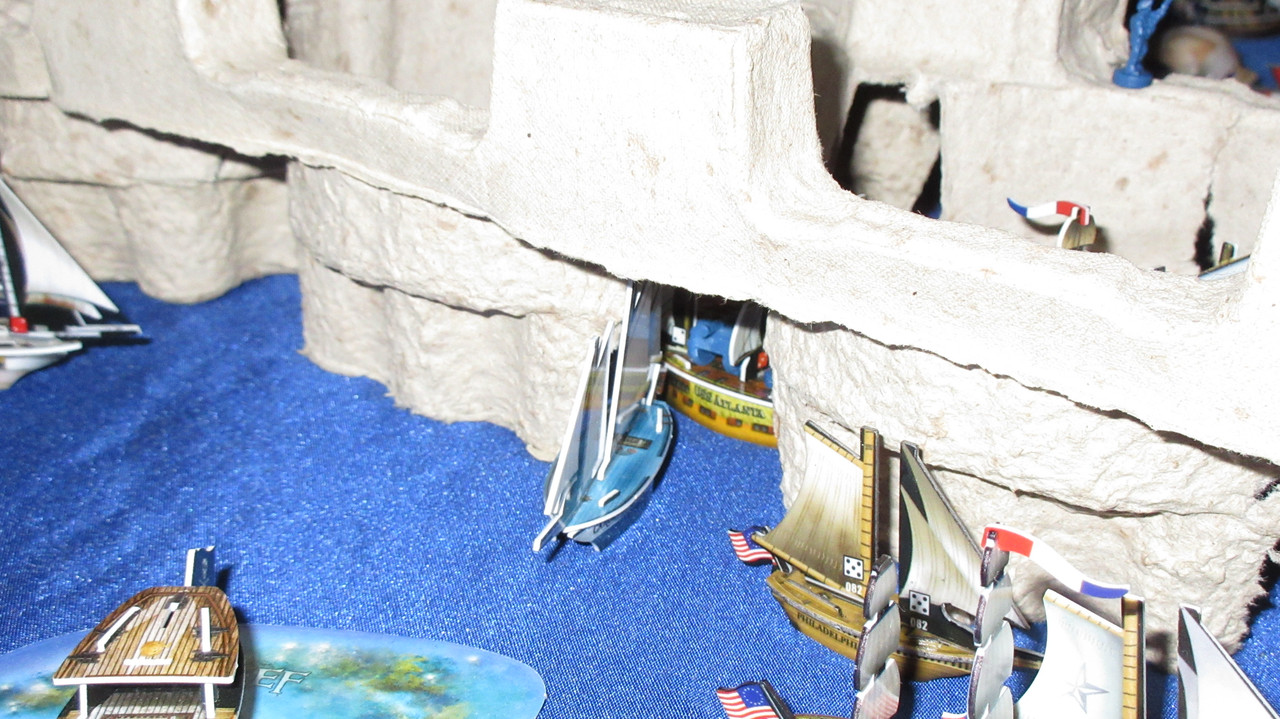 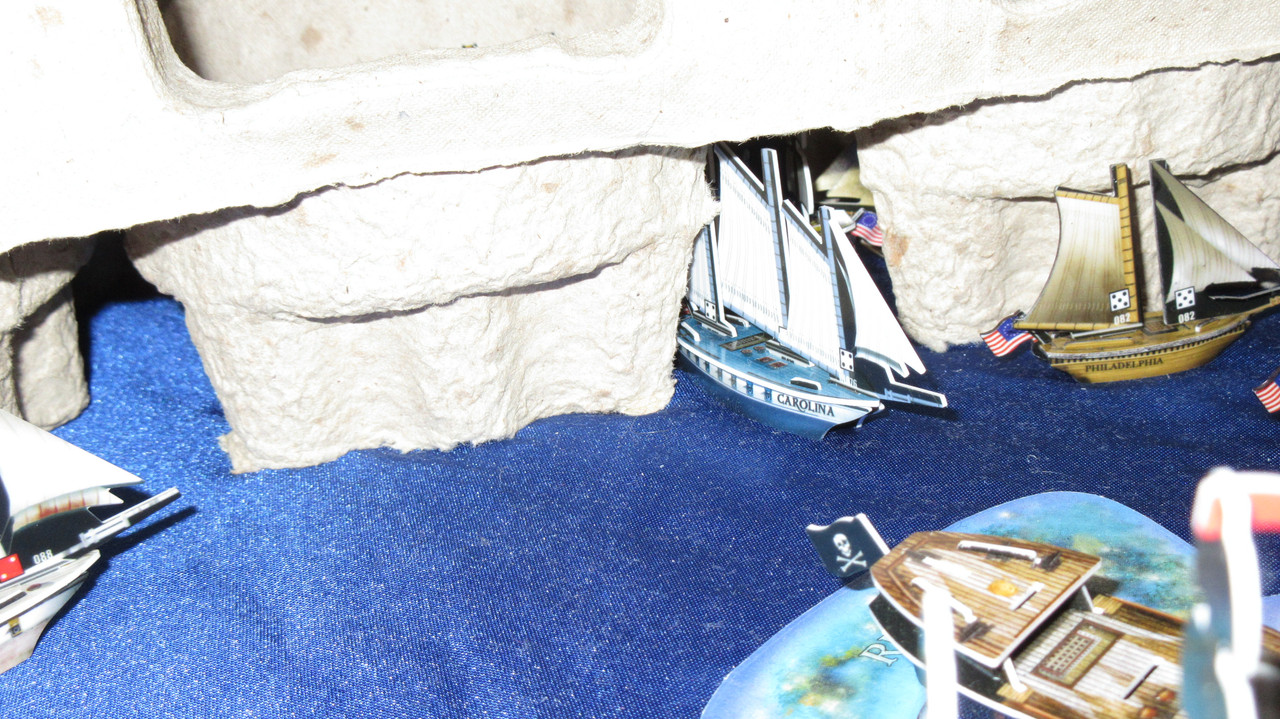 Wayne Nolan is desperately trying to unload the Enterprise’s fort upgrade so he can then turn the powerful warship against the hated Pirates on the battlefield. Near the Enterprise you can see about 8 American gunships trying to get to the battle. The Niagara is the only one of those to shoot so far, blasting away at the Lucky Seven. 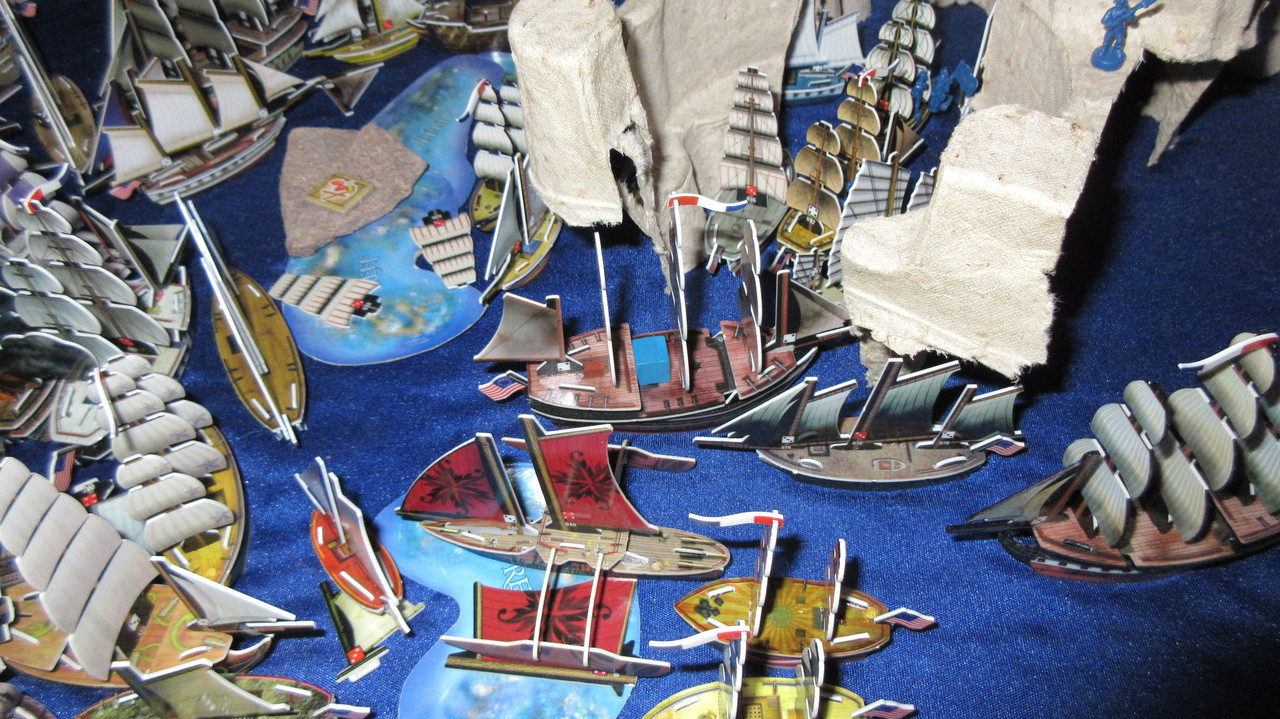 And now we really get into the thick of the action. The Americans have rallied with a war cry of “FIRE!!!” and it’s working well! The Georgetown used her reverse captain ability to shoot at and then ram the Freedom. The Niagara shot 1/2 to take a mast off the Lucky Seven, while the James Madison (a cargo ship but playing the role of block ship here to try and stop the Pirate advance) hit 1/3 to damage the Black Cat. The Appalachian was ineffective against the Devil’s Kiss, but the Saratoga is ready to back her up. 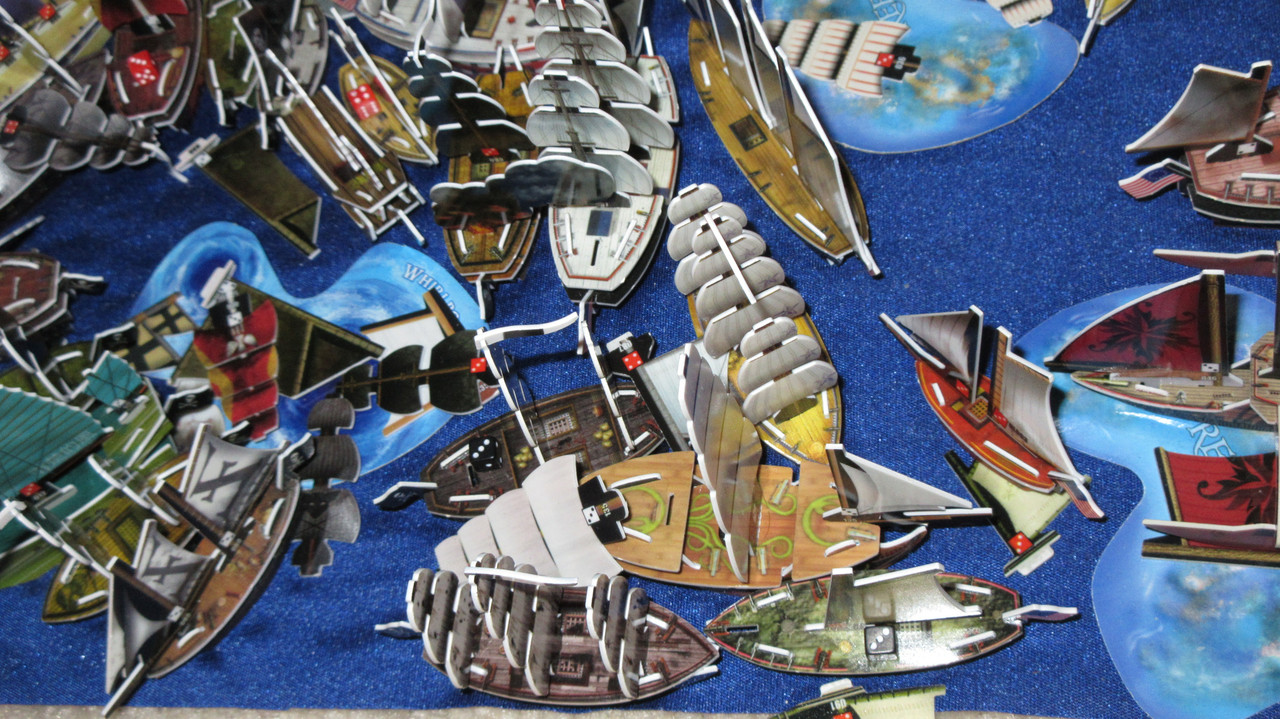 Right in the hottest part of the fight! Preble is not running away this time! The American admiral will lead from the front!! In a thematic display of leadership, the President went a whopping 4/4 to shoot masts off the Gruesome and Xiamen’s Claws, the latter of which was later captured. Just like the Georgetown to the south, the Lenox put out her fire mast. The Gruesome has been completely dismasted, while the Minerva is shattered and has lost all 3 of her crew. (her captain was possessed by Wraith, unbeknownst to the Pirates or Americans) The Hudson cannot compete with the Silverback’s L-immunity, but the Minuteman flotilla managed to knock a mast off with her 2S guns finding an open lane to shoot through. Some debris is beginning to pile up, but this is still the opening of the battle, so there will be MUCH more…. 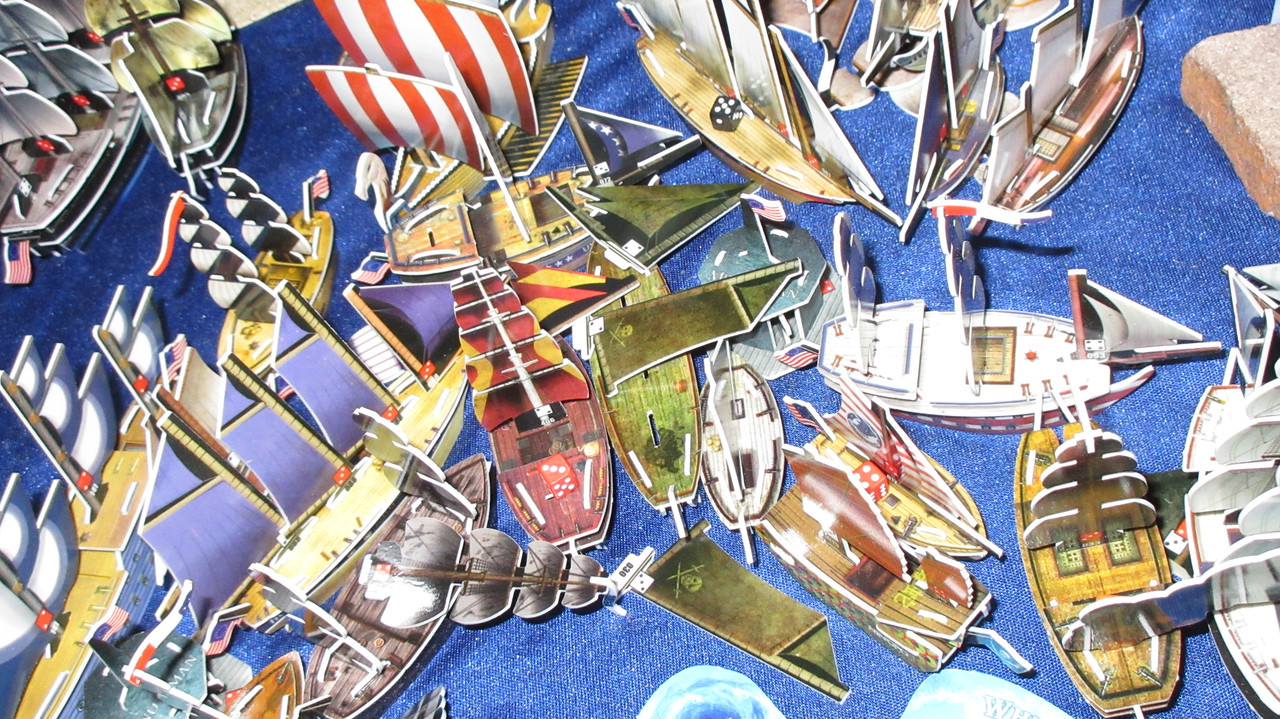 A beautiful shot of the American war fleet answering the call to arms! Indeed, the effective shooting allowed for the XC to be captured early in the turn. This made some room for the Quigley, Concordia, Julius Caesar, Blackwatch, and Grampus to approach the battle faster. The Minuteman (ship) helped dismast the XC, which is why her bow is pointed away from the battle. 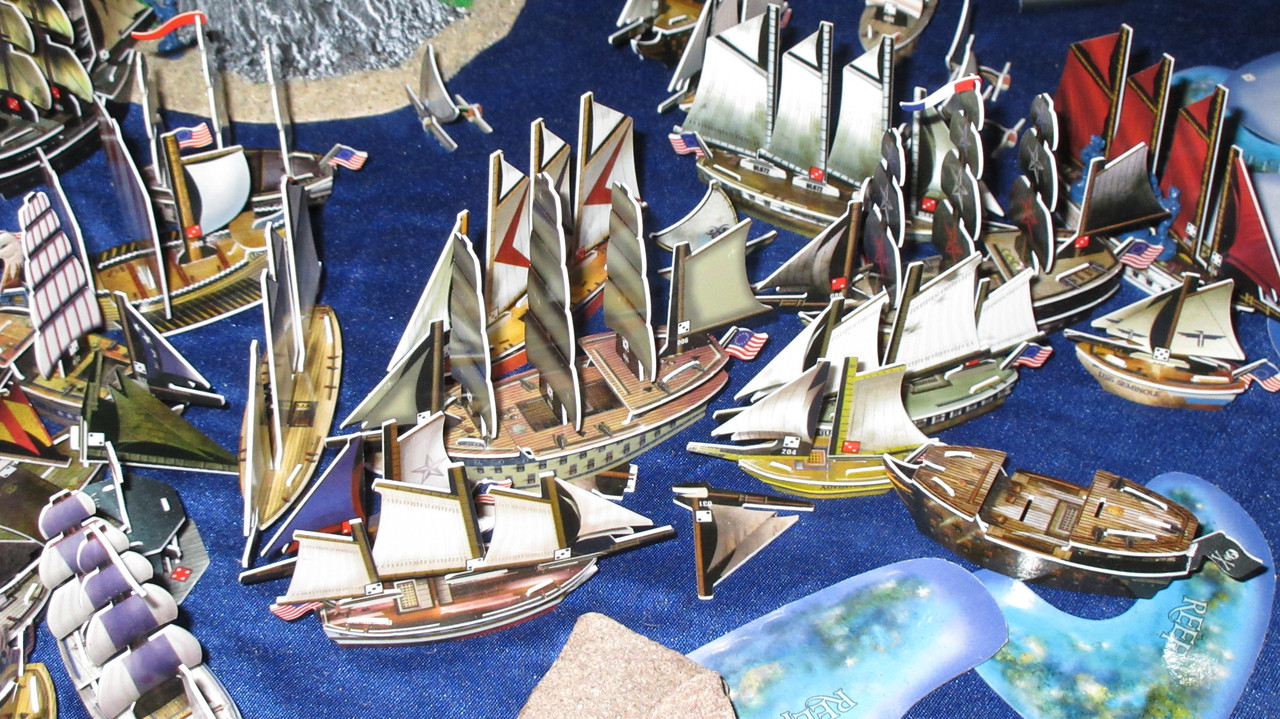 The Minuteman (flotilla) and James Madison combine to go 4/6 and severely damage Blackbeard’s ship! The QAR loses two masts and will likely retire as her crew are a big asset for the Pirates. Also notice the nice color on the various sails. 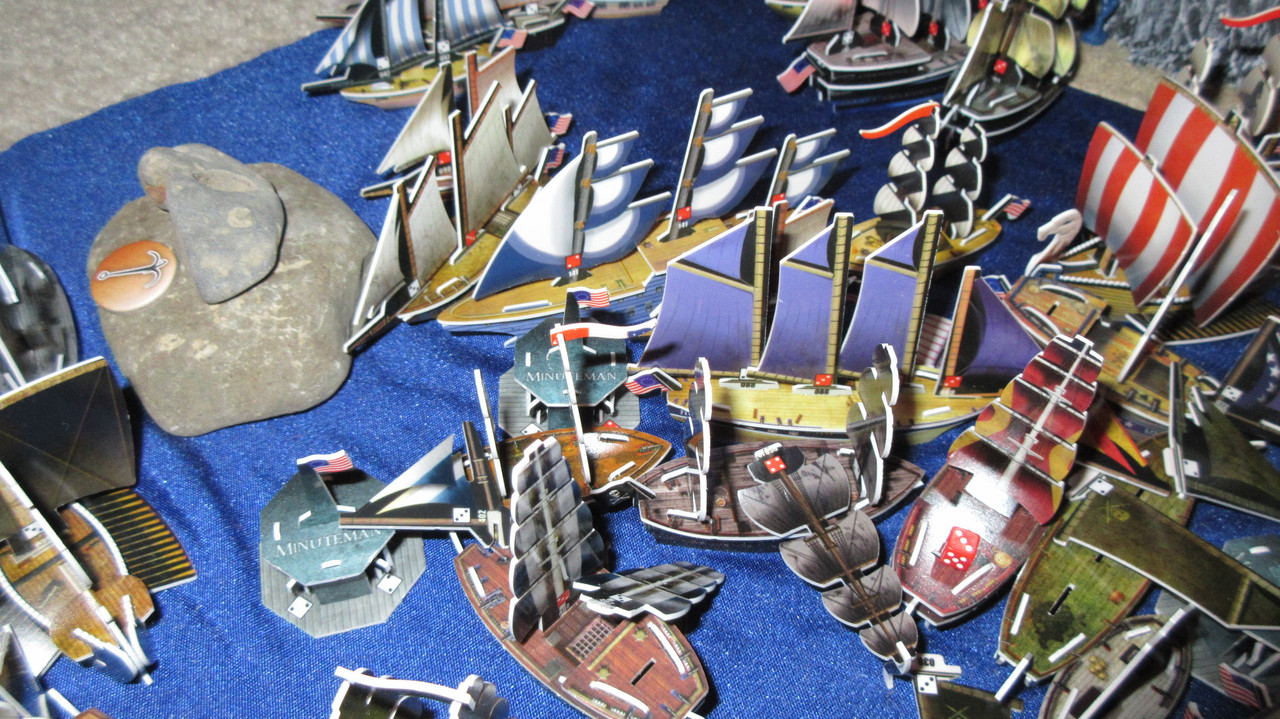 The ten American gunships launched last turn sail out! They will inject some life into the American resistance, which did FAR better this turn than last turn. The Americans were taken off guard at first, but now they are in do-or-die mode and Preble roused them to an effective turn. The 6 gunships at the top of the frame (Superior is behind the Oregon) aren’t likely to be too effective, but the Americans just need them to stem and hopefully HALT the Pirate advance. However, the two cancellers (Ghost Walker and Kettering) could provide a solid advantage for the Americans, especially with their abundance of L-range guns as well. 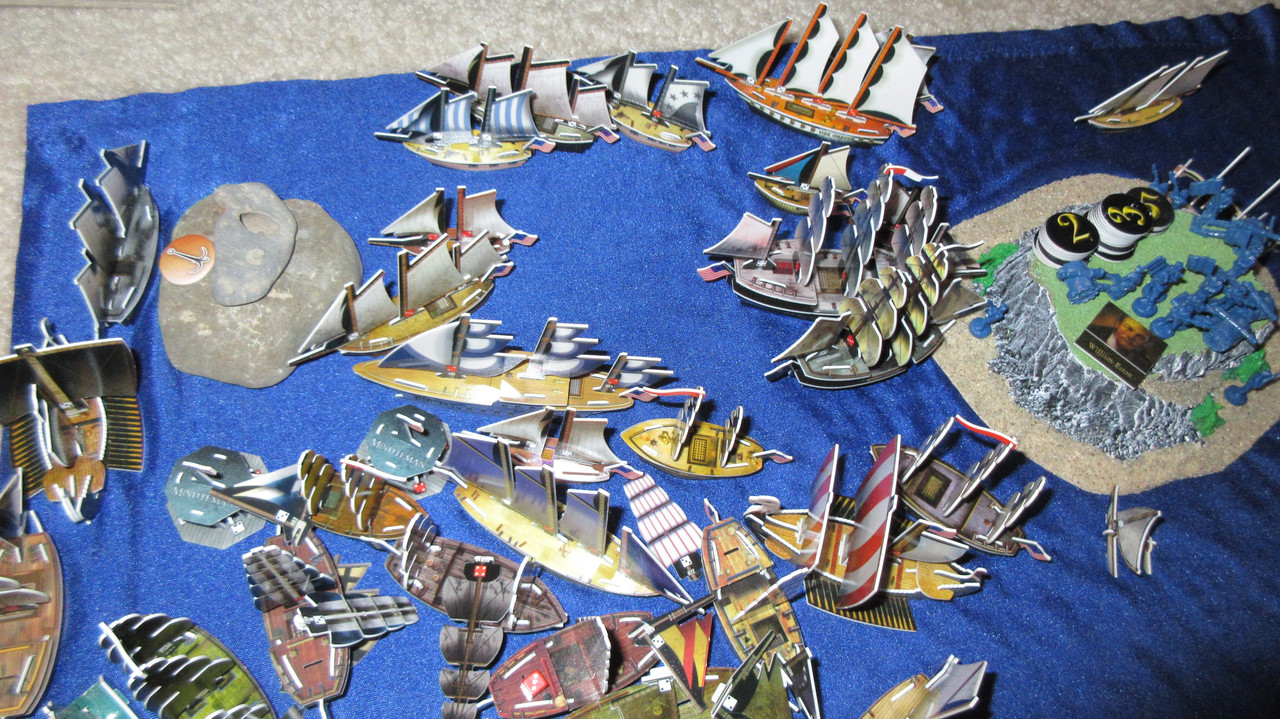 An overview of the battle area, with the Pirates the next faction to go as the next round begins…. 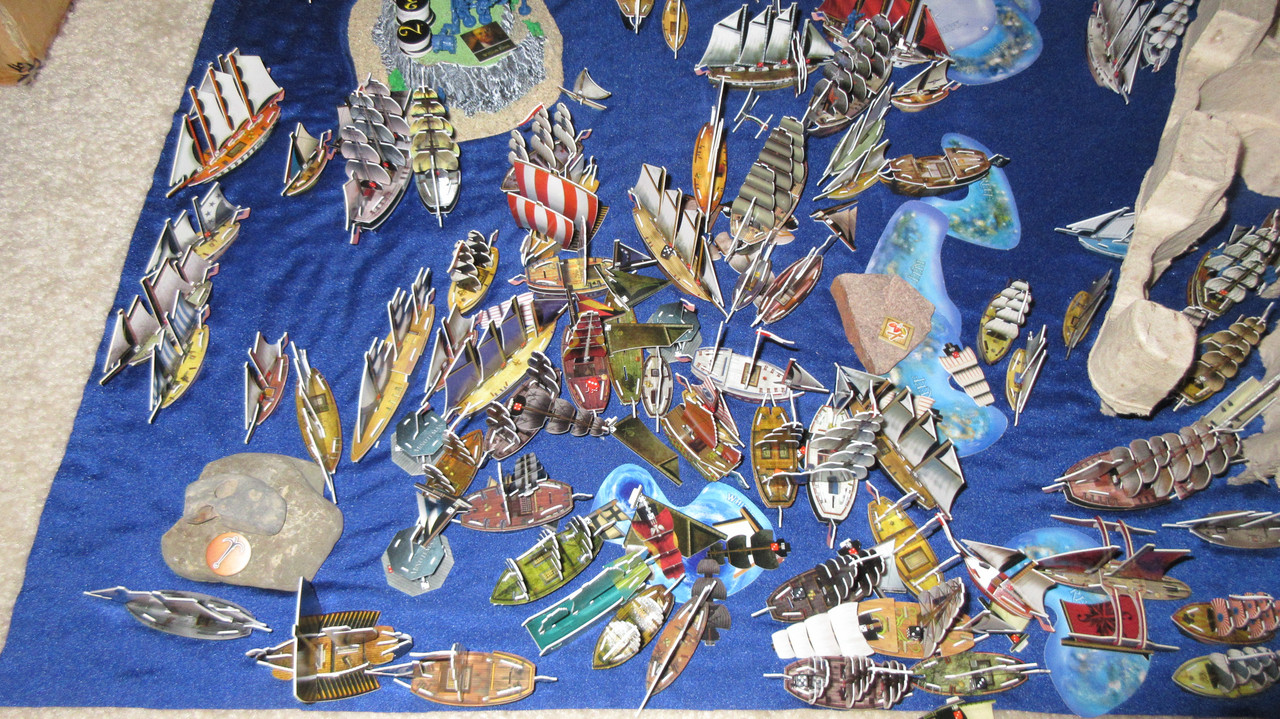 With all that effort down south, you’d think the Americans would have exhausted their fighting capacity. However, with one of the biggest fleets in any game ever, that is not the case! The Americans are holding their line strong against any potential French attack, with 13 gunships stationed north of the Castle. 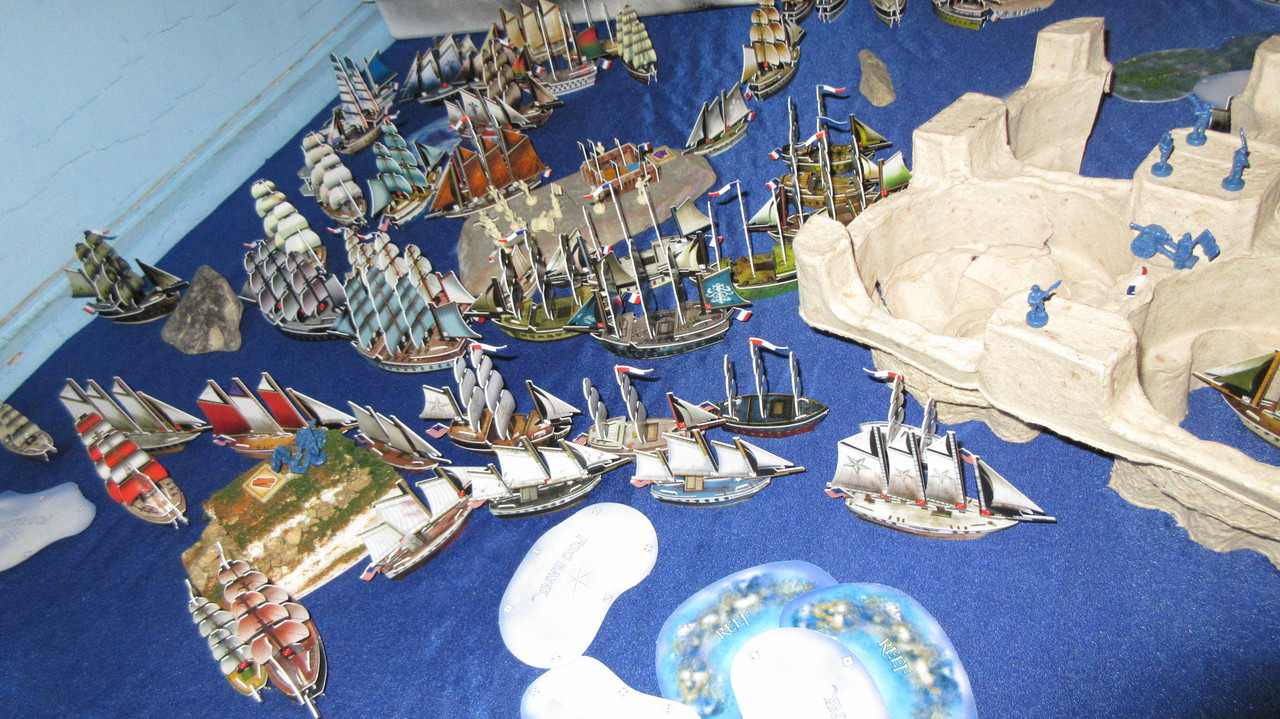 With the southeastern island finally revealed, here is the Sea of Karkuda! 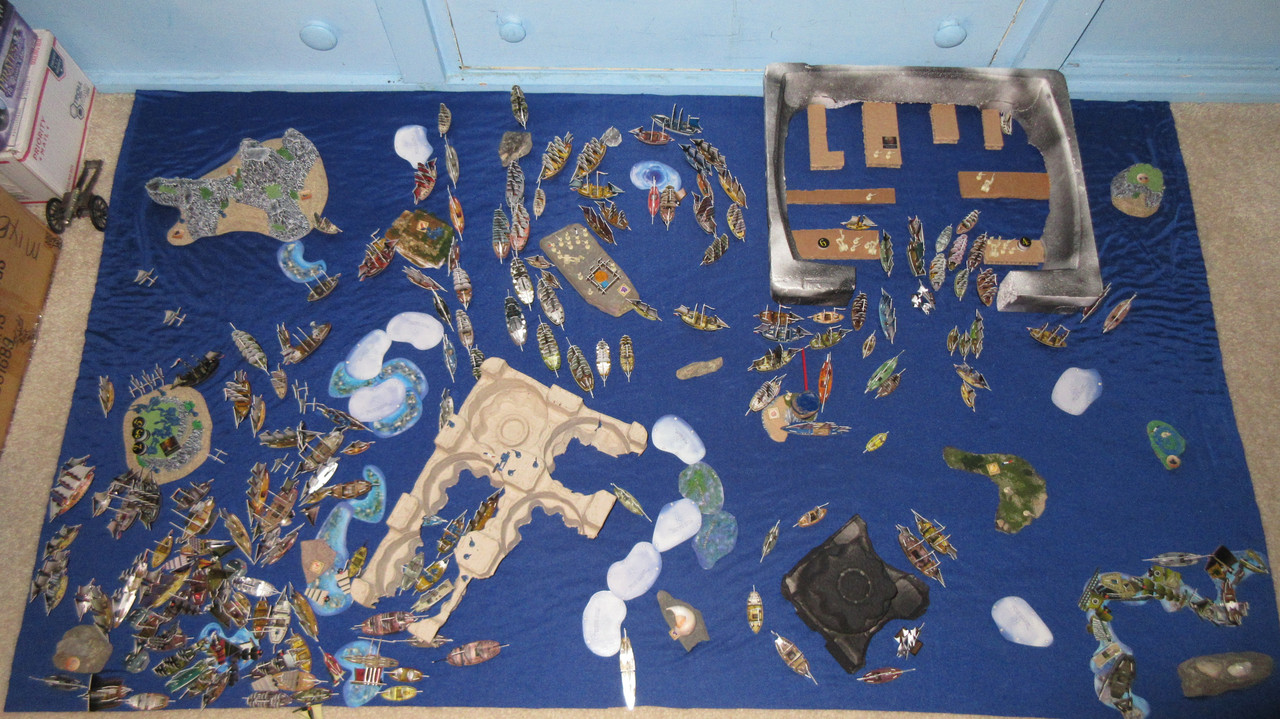