Clones of the Barbary Coast

This is my first entry for nematode66’s Attack of the Clones Fleet Challenge.

My collection is still lacking in terms of the Barbary Corsairs, but I’ve always been impressed with them. Pretty much all of their ships are very playable, and their two masters are especially viable for fleets looking for an extra ship. I would’ve used all of them if not for the point limit!

The Queen of Sheba is the unofficial flagship, and she’s going to be fighting and running gold. She’s sailing at S+S+S speed with a captain and two spots available for gold. The Morocco is my best gold runner, with S+S+S speed and room for three treasures. Her ability should enhance even further the gold gathering potential of the fleet. The Gallows is the only true gunship, and she’ll probably escort treasure runners and distract enemy gunships. The Griffin is a nice cheap gold runner, with a base move of S+L. She and the Dervish will explore the islands closer to home. The Dervish is dirt cheap, but still moving at L+S with room for two or three coins. The Agha’s Whip is another gold runner moving S+S+S, and she can take two treasures.

Diver and Raft were added to boost the point total to 60, while giving me gold insurance. The treasure-friendly UT’s should help out my gold adventures, and I might be able to find them early on with the Morocco’s ability.

This fleet’s strengths lie in its speed and numbers advantage; an easy-to-use Barbary swarm fleet. Thanks to nematode66 for running the Challenge, please comment and vote!

I thought the following picture from my Century of the Empires game was appropriate – the entire Cursed Corsair fleet. The Queen of Sheba is off to the left, with the Morocco and Griffin in the right foreground. The battle report for the game can be found here. In the thread, you can see the same picture, but it’s much bigger and easier to see. 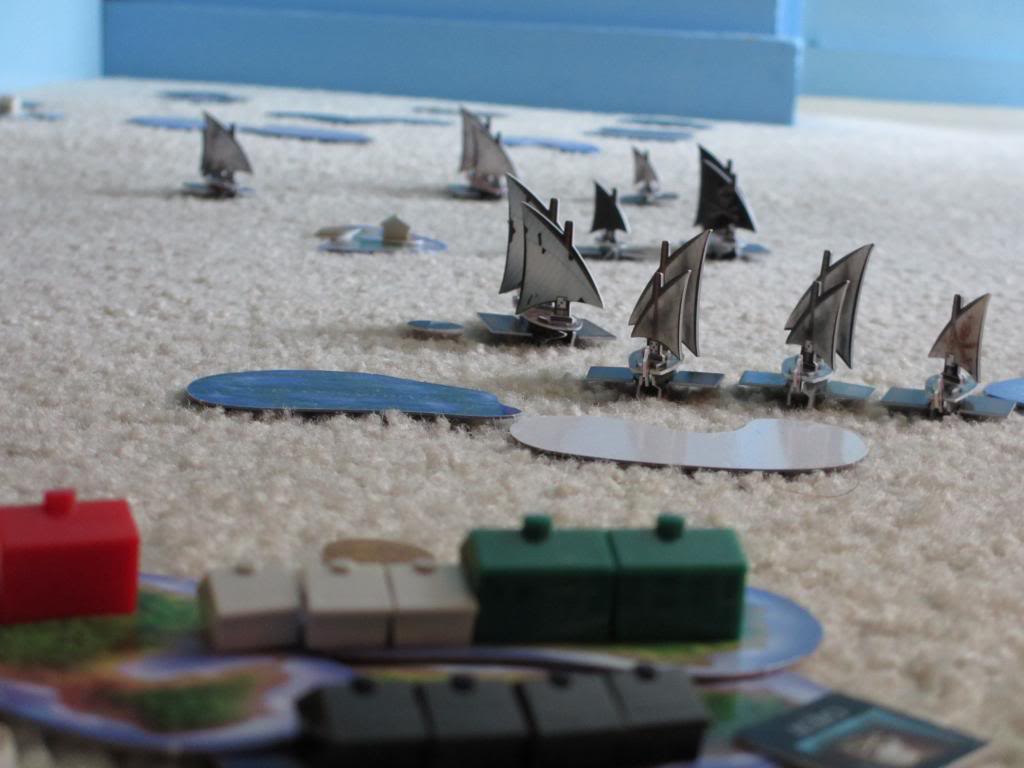 Thanks for checking this out!  What do you think of my Clones of the Barbary Coast fleet?