Turn 31 was played today! Indeed, the first 4 resource rolls came to exactly 30 turns total. My Economy Edition game peaked in terms of points on Turn 33, and only lasted 45 turns, meaning that not only is this game progressing at a slower pace points-wise (but a faster pace in terms of turns obviously, with 22 happening in the last 3 days lol), but it also has the potential to be LONG in terms of how many turns occur. However, now that the game is well into “huge” territory (1,000+ points), turns slow down considerably and take a long time for just a single turn to be completed.

Another resource change was needed! With odd luck, I rolled three 4’s! Metals went from being the least valuable resource to the most valuable! This greatly benefits the Spanish and Pirates, the only factions to have found metals so far. Textiles remained the best overall resource in the game, going from 6 gold to 5 gold, meaning it has always been in the upper half of resource values through all 5 of the first resource changes. Food (fish) fell to a new low of 1, meaning the French and Americans would have to suffer through another drought. At this point in the game, the duration becomes more important because turns are taking longer and more events happen on each round of turns. 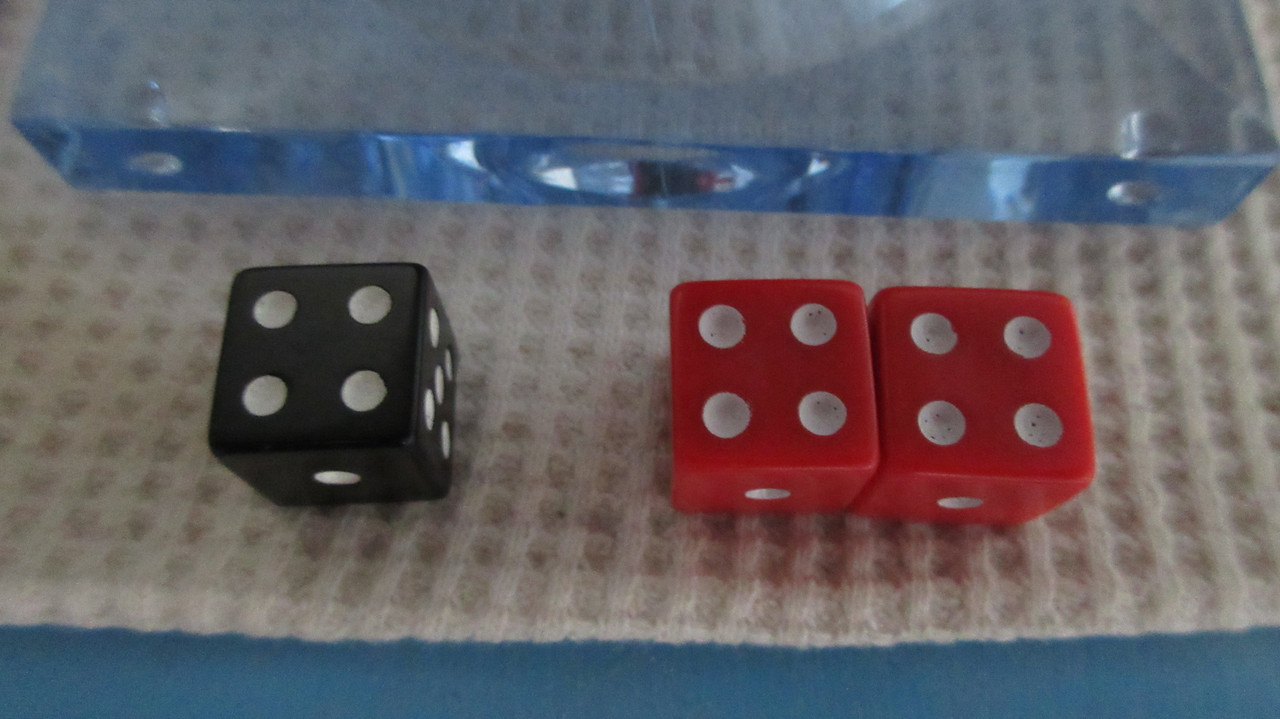 As planned, the Darkhawk II gives a ghost coin to Mission’s flagship, the Crusher. This means that Mission will be able to make the Crusher ghostly whenever he wants as long as the coin is still aboard. 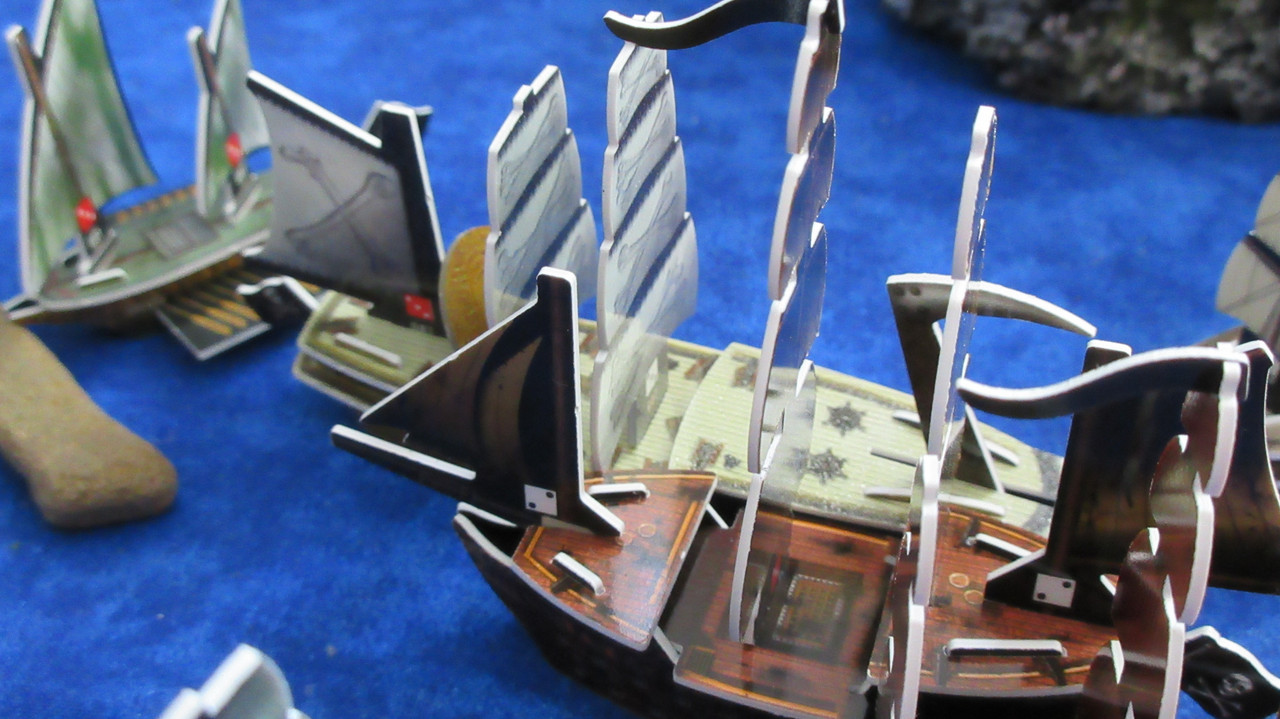 With the newly launched Fool’s Hope patrolling the waters, Pirate hybrids load textiles west of their kingdom. Much more interesting is the first fort of the game! Dead Man’s Point is purchased for 18 gold. That’s right, I am multiplying the cost of each fort by SIX in order to have them be more of an investment and make them more fair for gameplay, the same change that exists in the World ruleset. A fort will deny any other faction from loading resources from that island, as well as provide a superior defensive position. Couple that with the fact that the 2 hits per mast rule also applies to forts, and it would make no sense if forts costed 3-5 gold when they are arguably more valuable than a fully crewed gunship that costs far more. This way a fort costs as much as most large gunships, but the gold is still moved to the fort and placed inside as usual. (this means that a fort that costs 5 gold in normal games will need to permanently house 30 gold in this game) 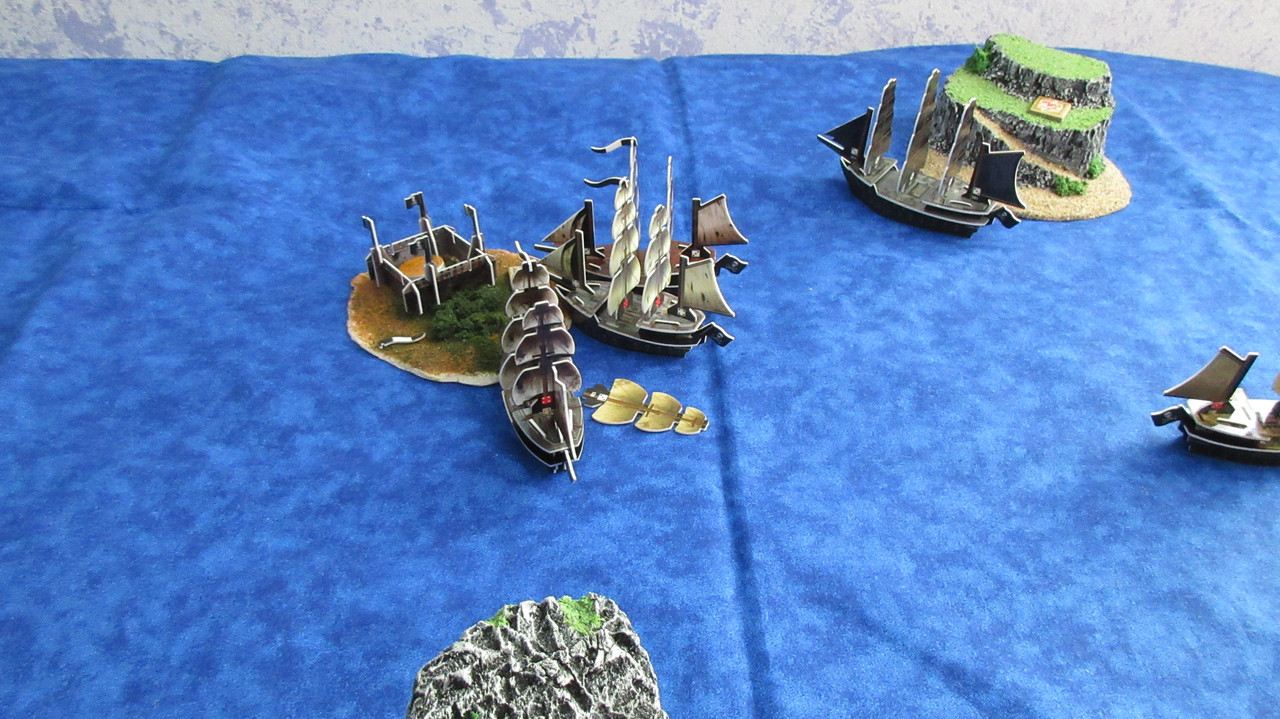 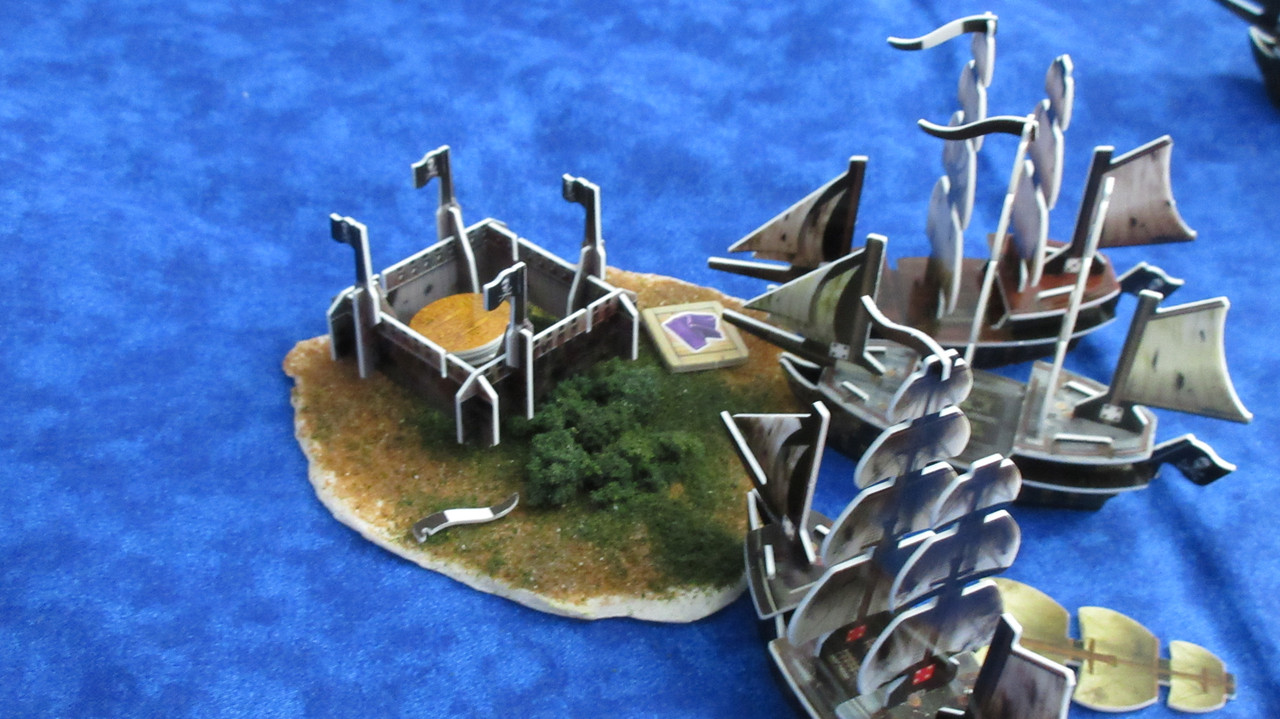 Combining their handful of now-valuable metals with some saved-up gold, the Pirates spend 86 gold! This includes the 18 spent on the fort, but they also launch the Deliverance (with sac captain Havana Black, a helmsman, and oarsmen), Adventure, Paradox, and Nancy Nox. Capacious ships, even with a base move of S, can be pretty valuable in the long run in games like these. At the bottom of the frame, notice the Smiling Jim and Doombox have moved to a deep point of the kingdom to repair without blocking the entrances for other ships. 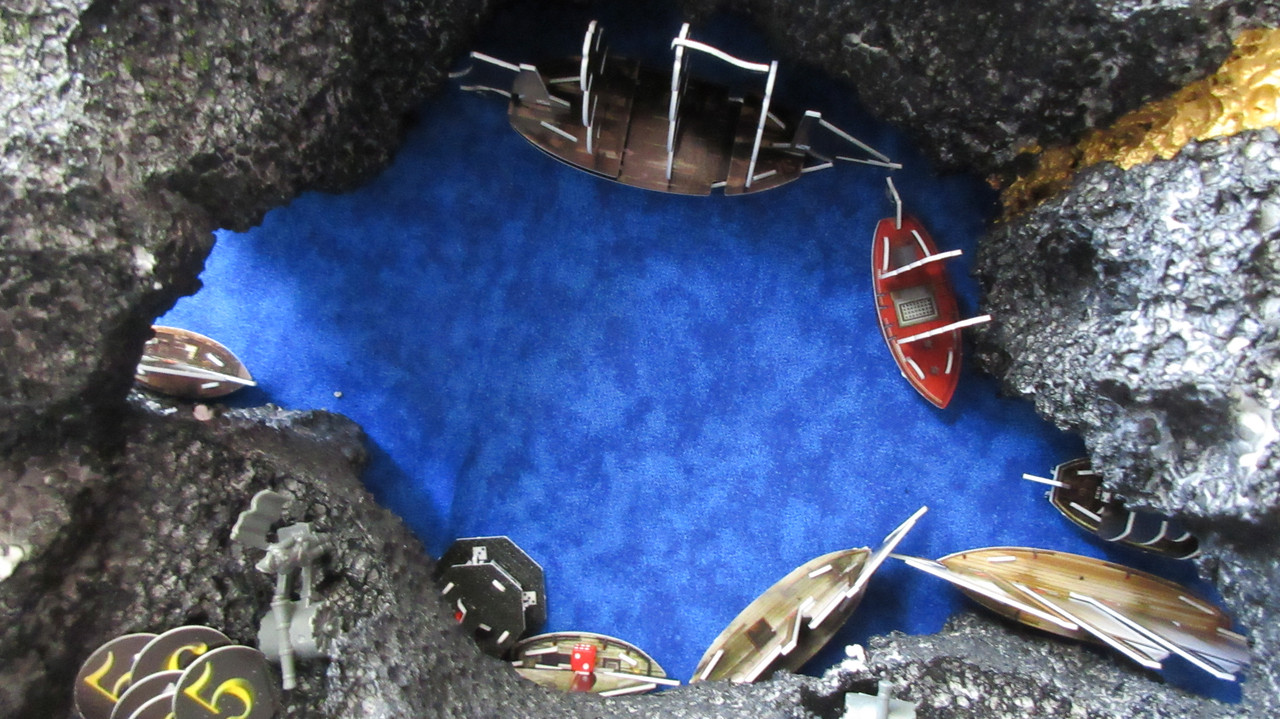 A wider shot of the general Jade Rebellion situation. In the left foreground, 3 ships join the textile gatherers in going to the home island, but they are there for repairs. Closeups of the action in the next few pictures! 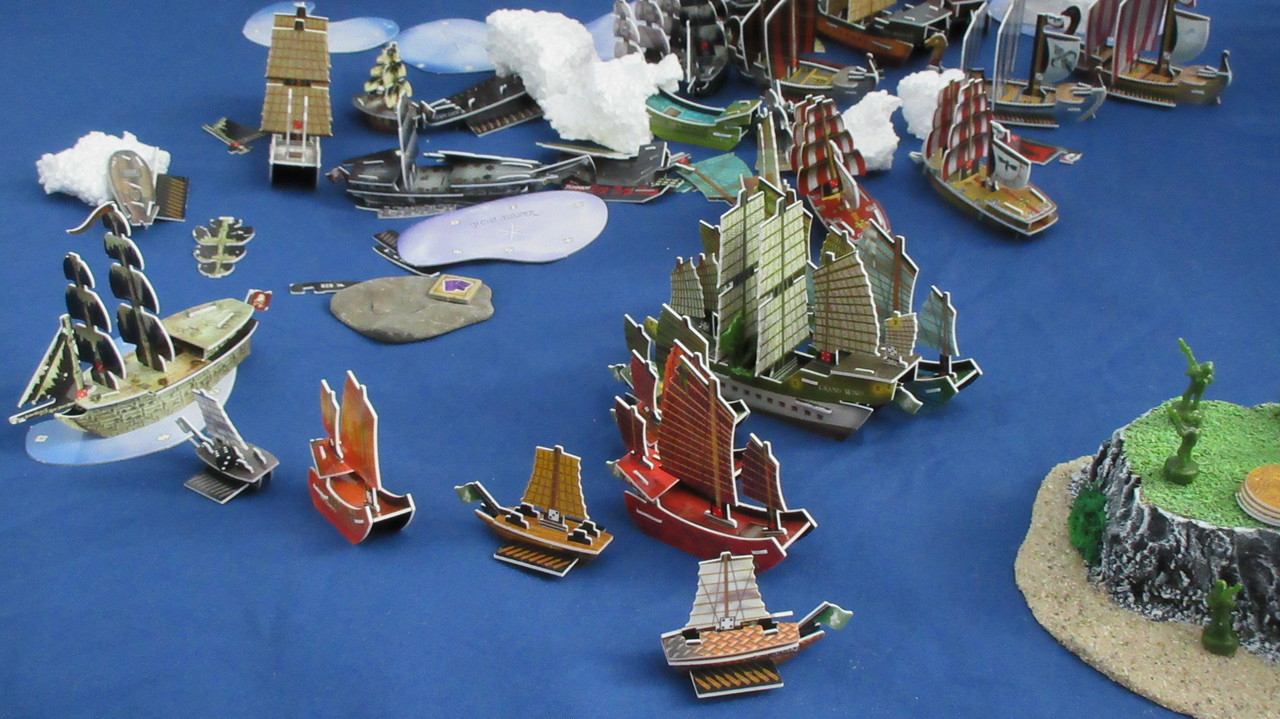 The Grand Temple finally gets a favorable fog roll, and comes out guns blazing! Her shooting is reasonably effective, taking a mast off the Jikininki and Scythe. 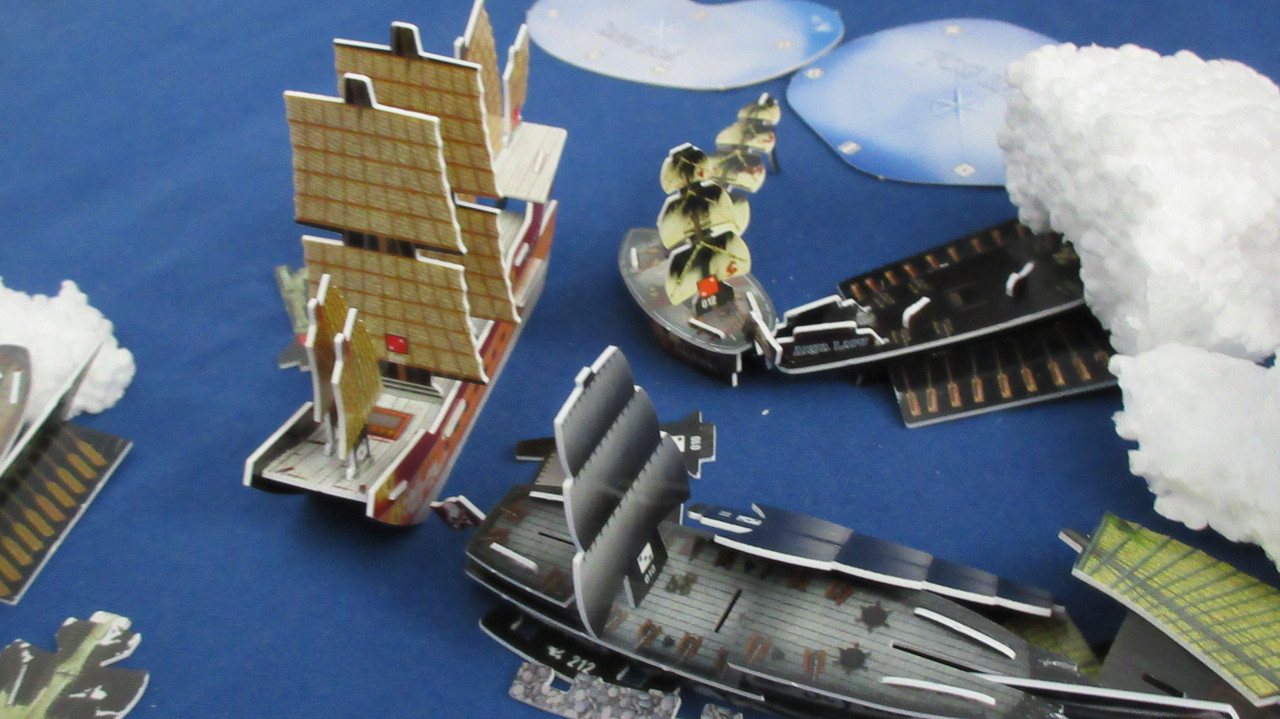 Smash! The Beowulf rams an icewreck and breaks the iceberg in two! I love how I’m *actually* breaking icebergs! How cool is that! LOL. I would definitely suggest that players get some random chunks of foam for use as real icebergs, since they are extremely easy to use (no painting or anything required – just rip some off and literally throw it on your map!) and obviously they look fine and can even be broken when you have icebreakers in play. So practical and awesome! 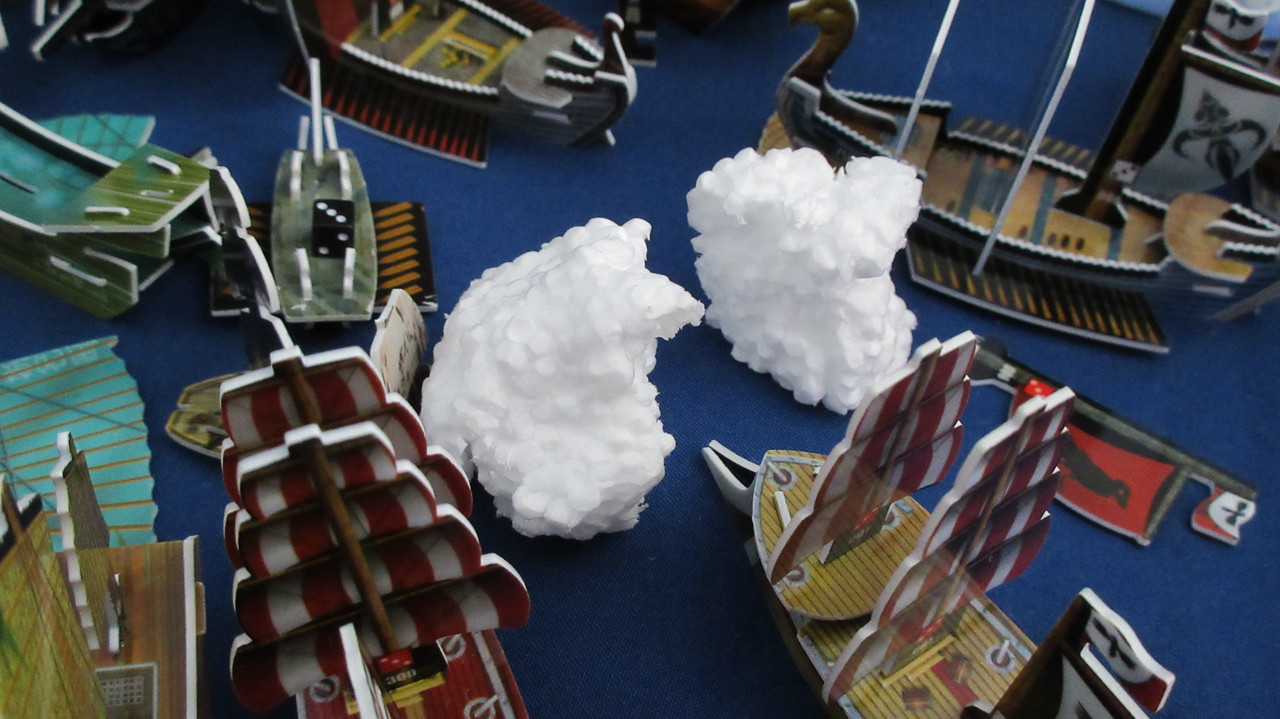 The Muninn makes her entrance! Both shots miss! XD However, check out the stuff happening on her starboard side: the Last Hope has been dismasted, and the Silver Coffin was sunk! I should have mentioned in the first post that not only do forts and flotillas not follow the no-duplicates rule, they also can be relaunched as many times as a faction wants, unlike regular ships. Named crew must be unique, but can be rehired for different versions if the first version is eliminated or removed. 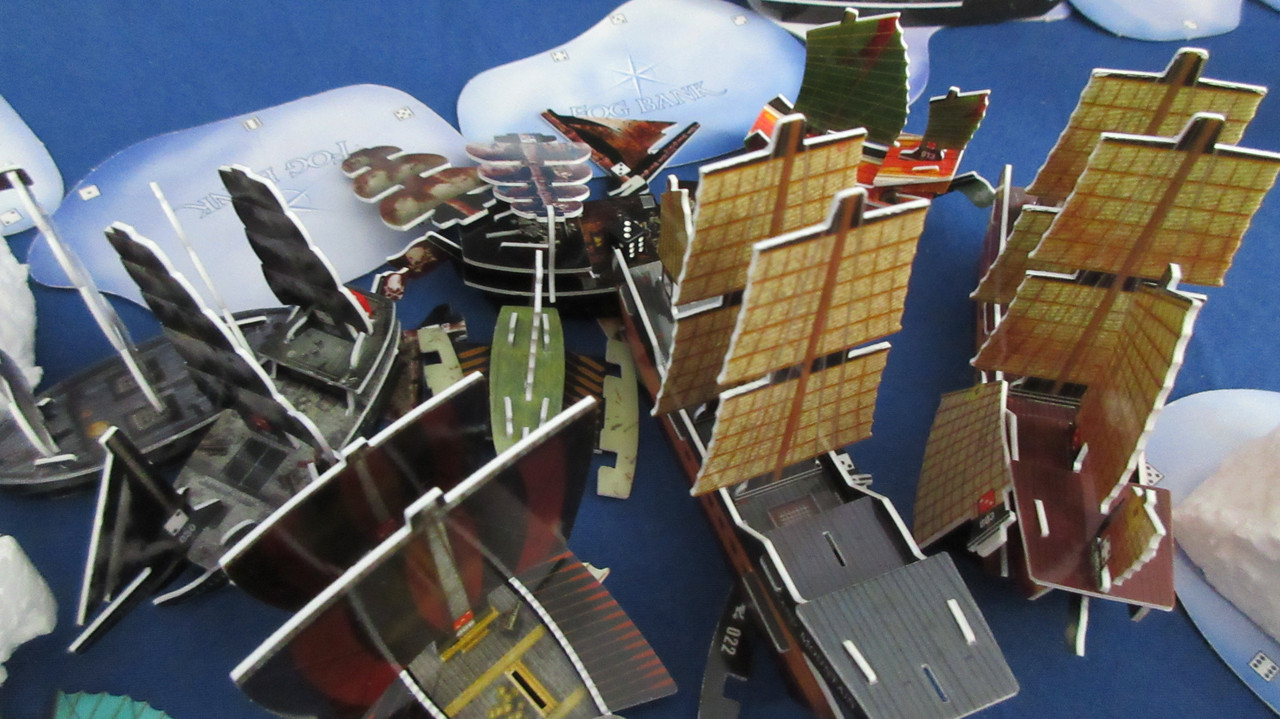 Clearly the Jade Rebellion is winning their battle against their strange foes, but it comes with a cost: the Clear Wind and Typhoon are lost, and major repairs will be necessary for the battle fleet to return to full strength. At the lower left the Polaris has rammed the shipwreck stuck in the iceberg, mostly in a futile attempt to allow the Divine Wind to shoot at the Scythe and/or get to the dismasted Glorious Treasure. What a messy scene! 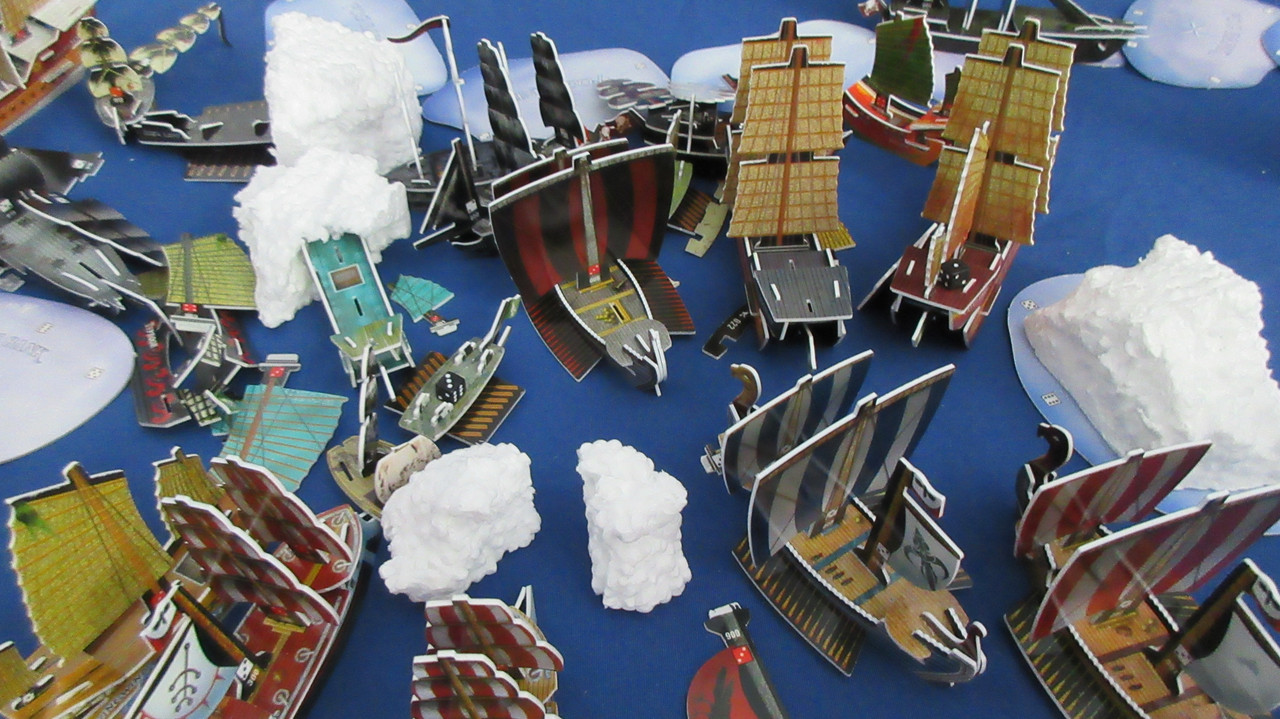 A seemingly possessed icewreck rams the Grand Temple! However, notice that the Cursed vessels that came out of nowhere appear to be disappearing just as quickly…. 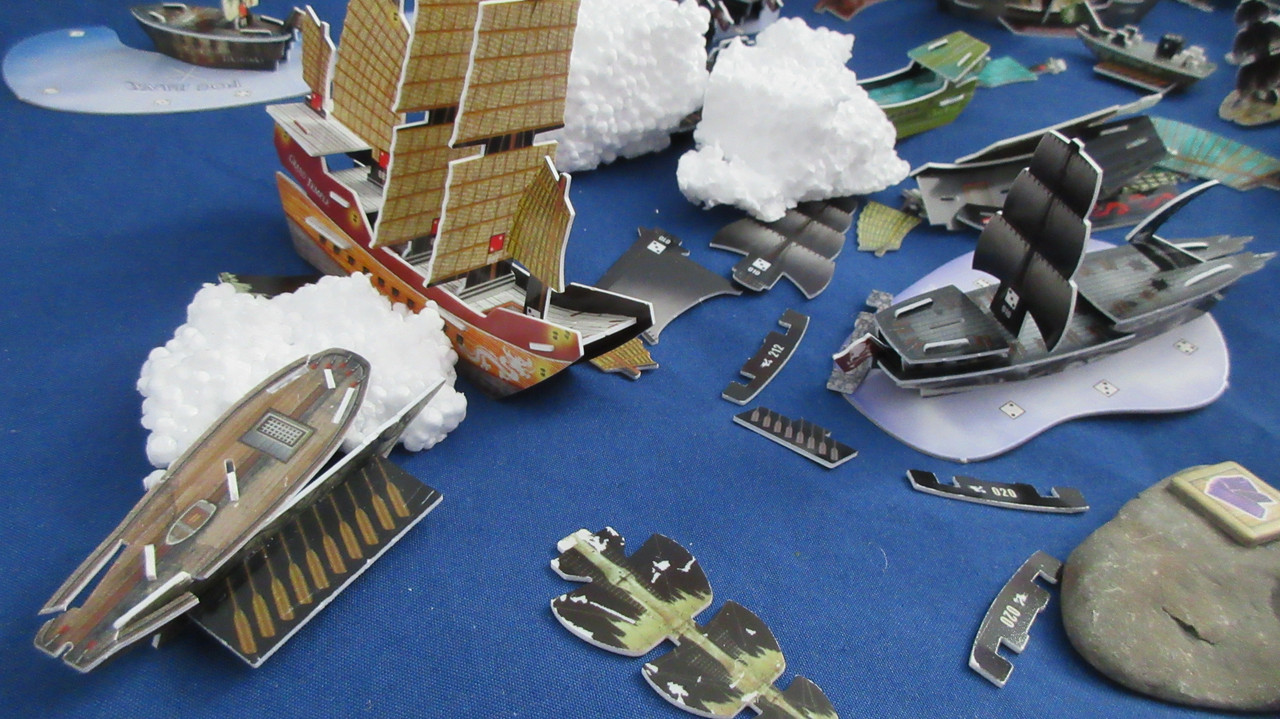 Indeed, the Cursed have gone into a general retreat. A few ships didn’t even get into action, namely the Spilled Salt and Pestilence. It remains to be seen where these hordes came from, but Tsai (aboard the GT) suggests they came from the “gates” of hell itself! (the big 6 means the Last Hope has been scuttled) 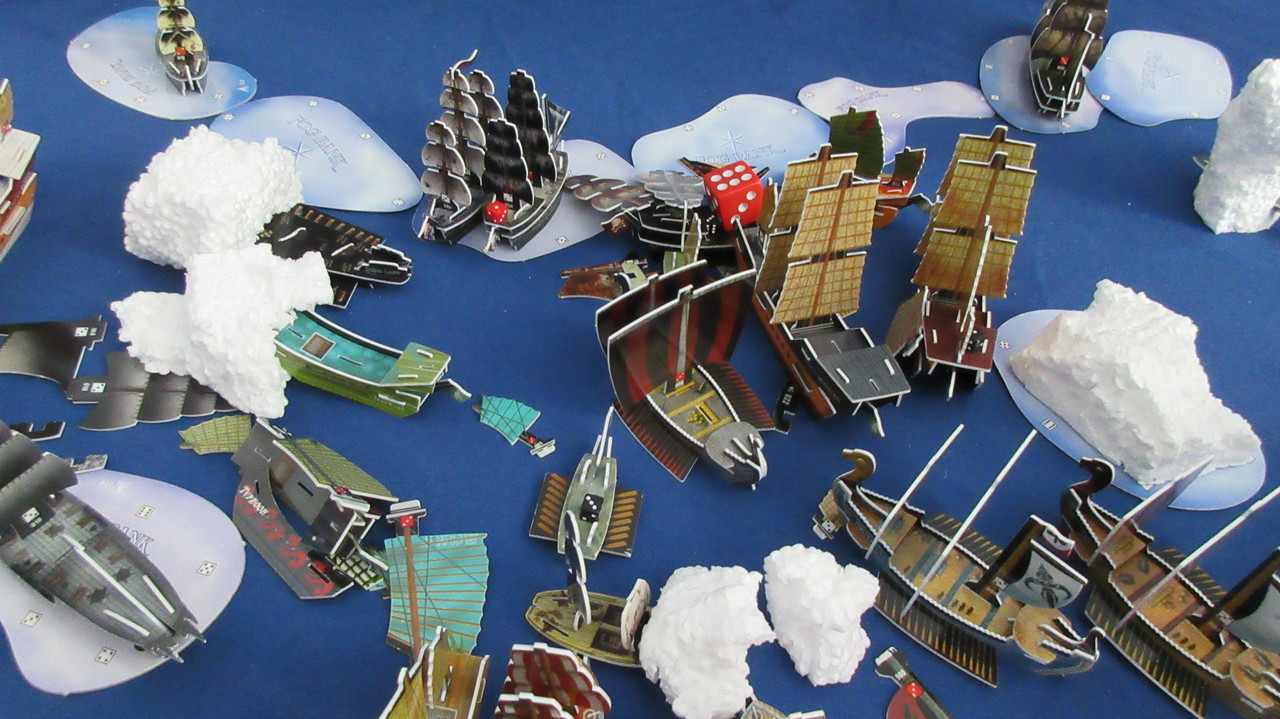 A sad scene, as HMS Viceroy burns to the waterline. The Lady Provost rescues Admiral Thomas Gunn and the Burma’s captain. 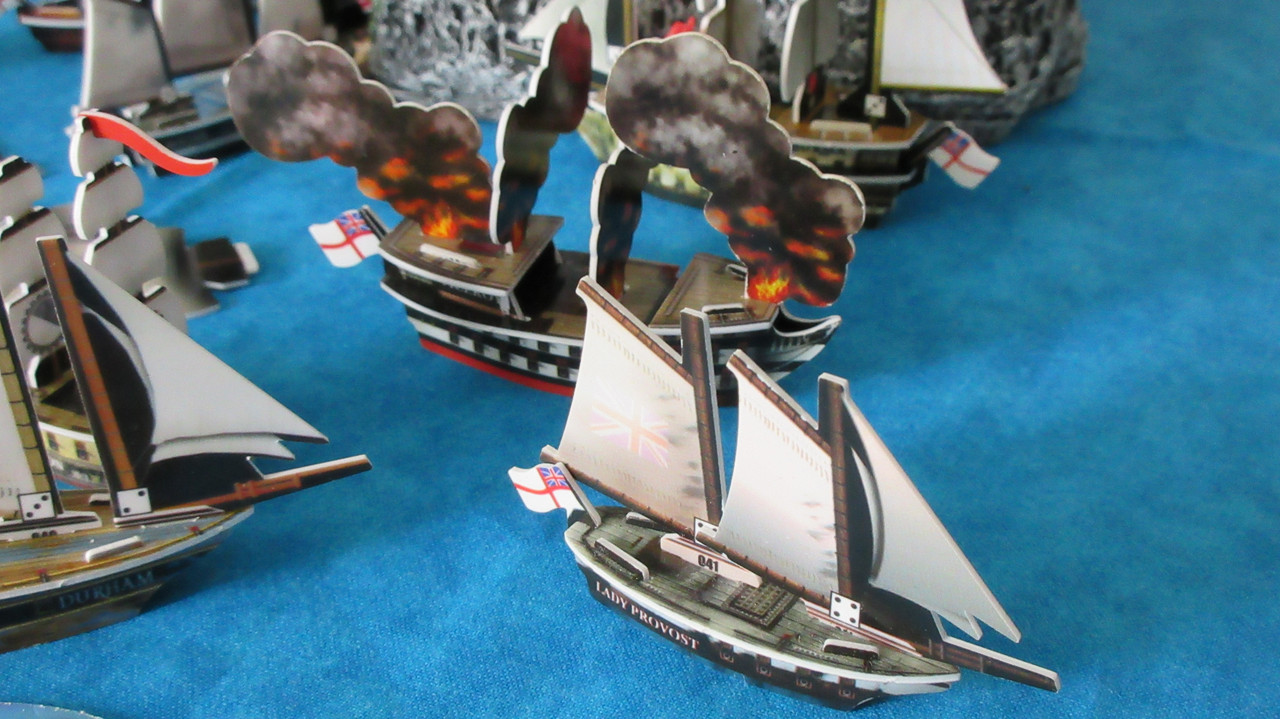 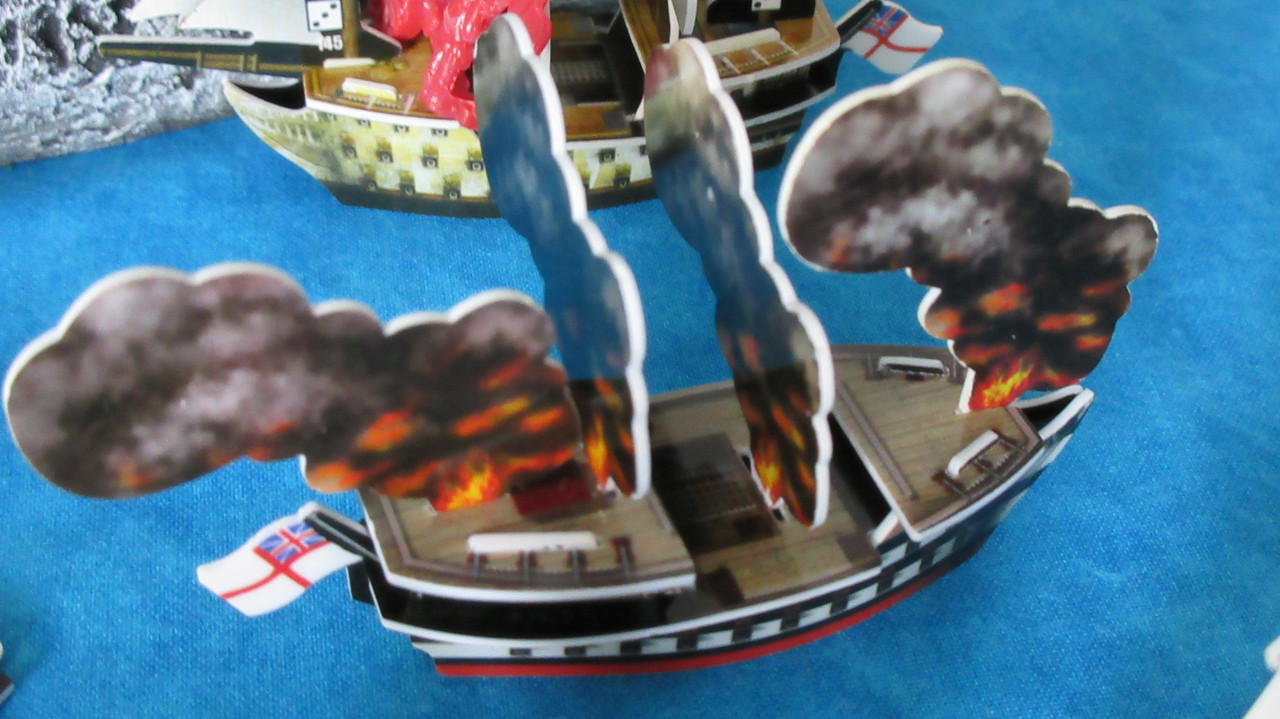 And she goes under. England’s flagship is no more. 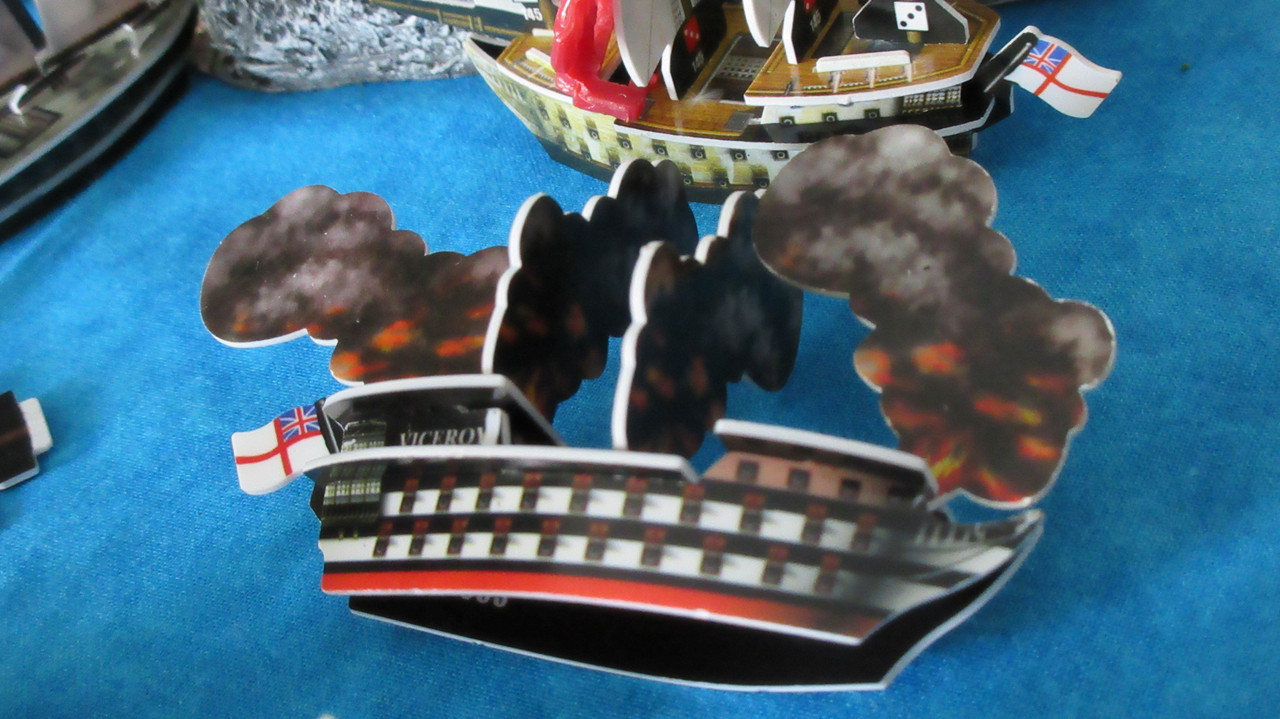 The King John shadows the Apollo, making a return trip to the Duke shipwreck but weary of any potential Spanish interference: 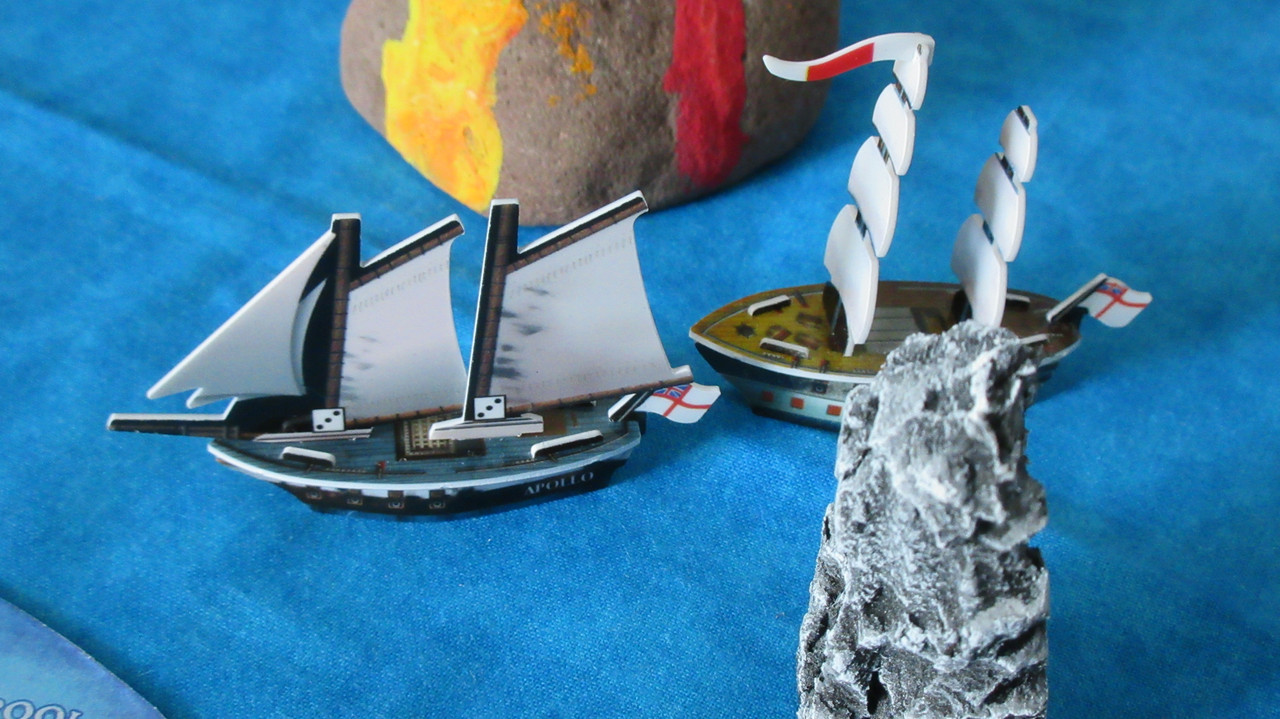 HMS Sultan unloads two artillery units at Diamond Rock, which is now even more crowded! Sloops sail in to grab textiles, while the London and Bretwalda patrol the waters, scanning the horizon for hostile Spaniards. 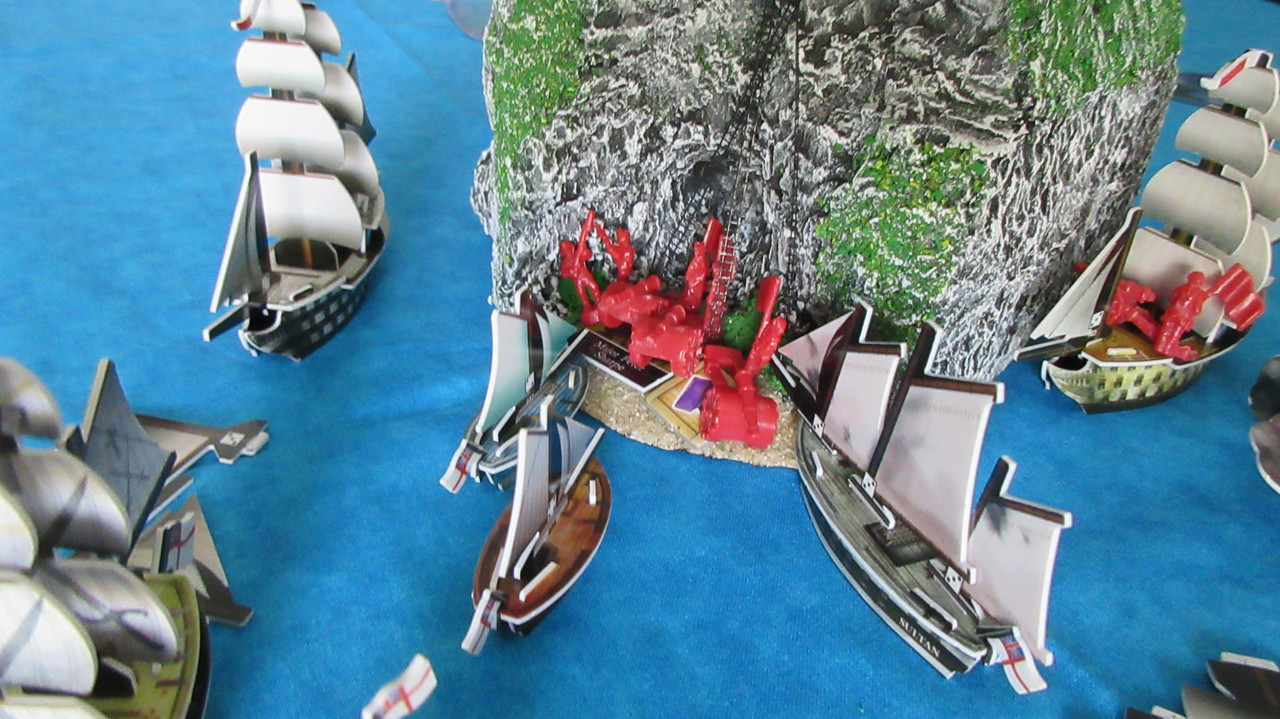 Saddened but vengeful, Thomas Gunn needs a new flagship. He considers a wide variety of options, mostly 5 masted juggernauts. In the end, I couldn’t resist choosing the perfect ship for the situation: HMS Lord Algernon! 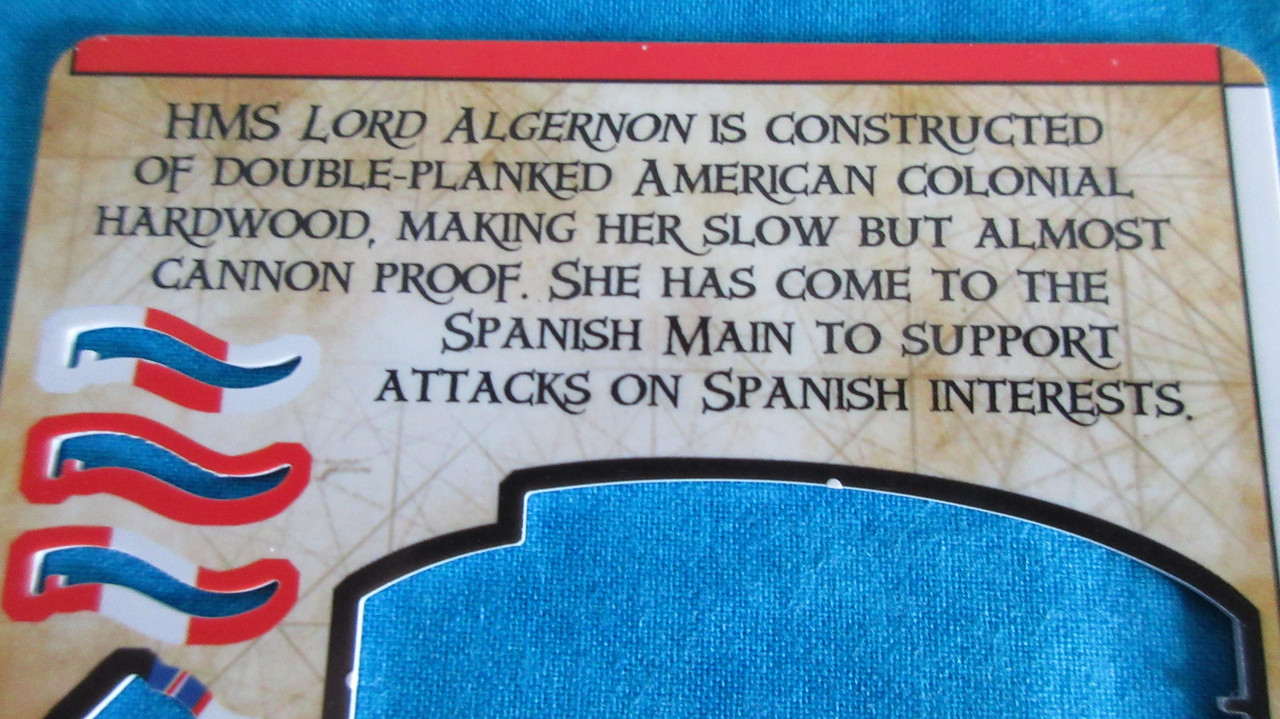 How’s that for the perfect flavor text, eh?

There she is! What a beauty! HMS Lord Algernon was my most-wanted ship for many years before I acquired her in 2011. She has been my favorite ship since then. Not for gameplay necessarily, although I love how her armament, speed, and ability are reminiscent of what real ships-of-the-line would be like in this game. She looks more similar to HMS Victory and other Royal Navy flagships than any ship in the game. Due to somewhat lackluster in-game stats, and my extreme cautiousness in handling my favorites, she has barely ever been used in my games, which is a rarity for me in general since I play so much and love using different ships than what I’ve used in the past. However, it is time she gained some experience! Too long has she sat in her box in perfect condition! HMS Lord Algernon will set sail!! 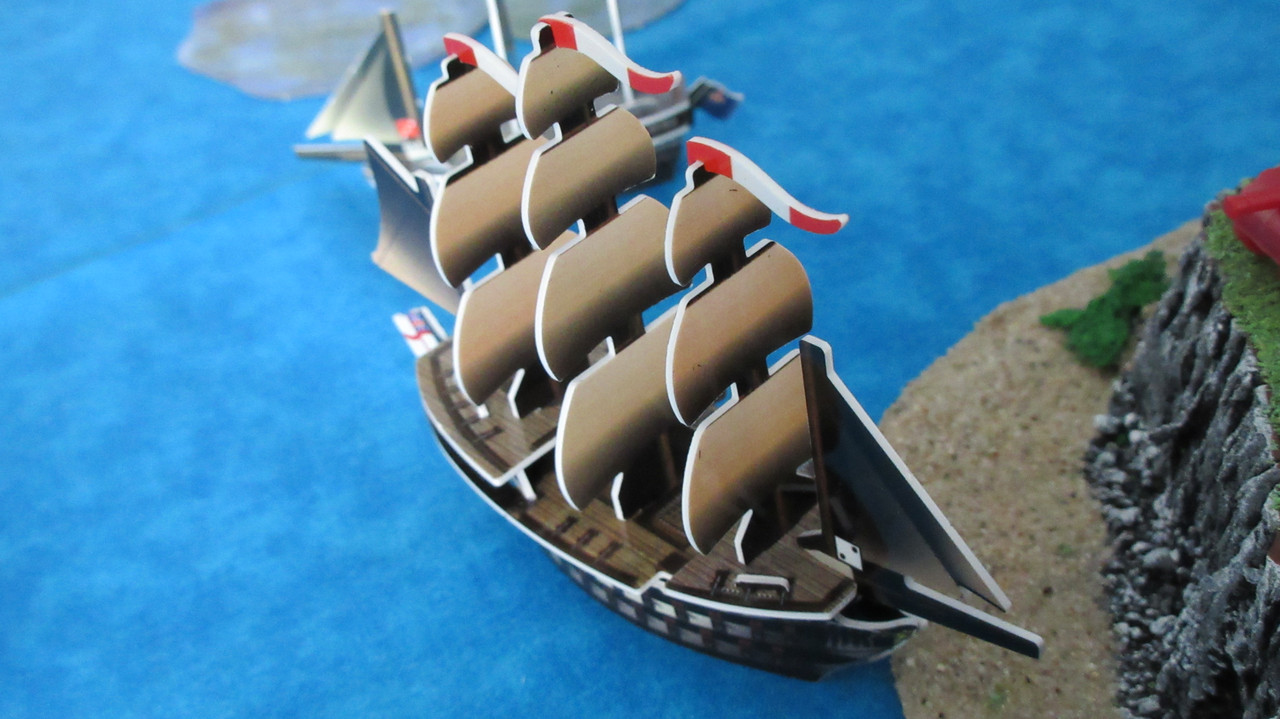 My favorite ship in the game. Here she is in all her glory as England’s new flagship. I also think this is the perfect situation for her, as I hope to make this game my grandest and most epic personal campaign game EVER. Only such an epic would call for a ship like this. It is fitting that she appear at such an amazing time in my Pirates CSG experience, with so much moreamazing stuff to come in this game of Command the Oceans! 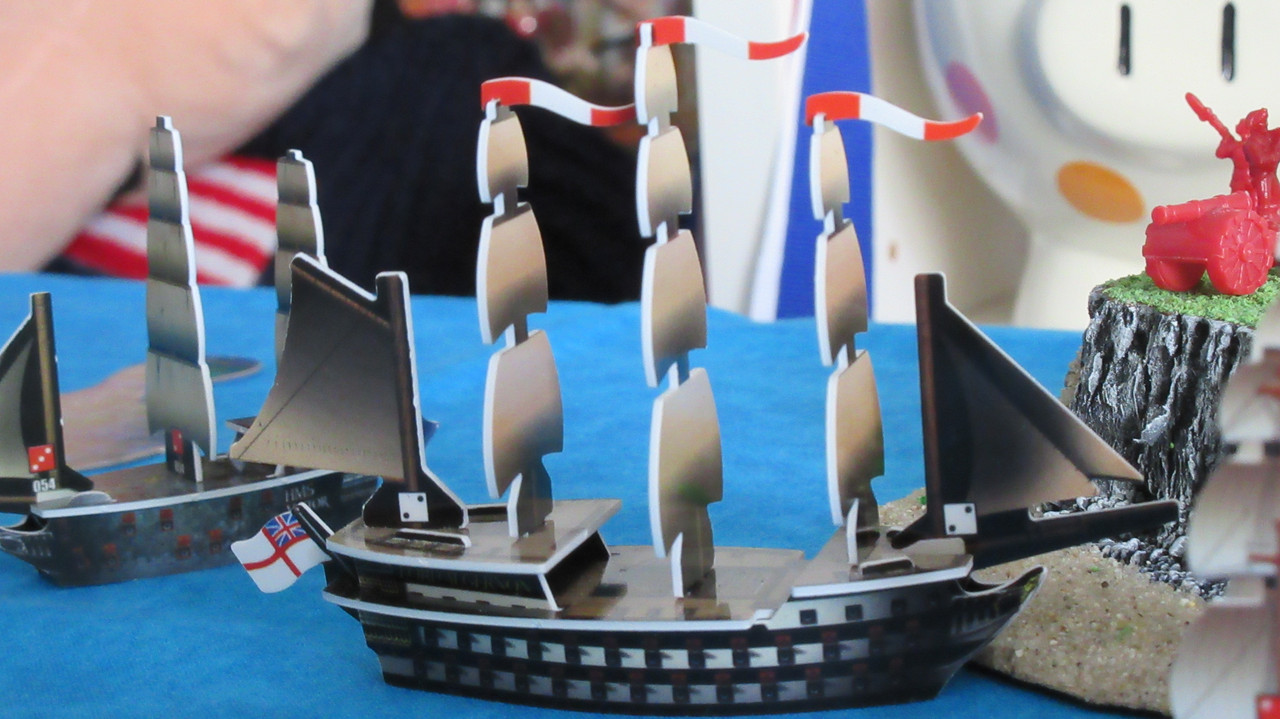 She will be crewed by Thomas Gunn (once he arrives from the Lady Provost), LE Griffin, a firepot specialist, and an oarsman. In this way, she will be capable of S+S+S speed with rank-1 cannons firing firepots and boasting her defensive ability along with the oarsman for protection against capture and crew elimination.

HERE WE GO!! The Spanish go from despondent and weak to excited and rich in just a couple turns! With metals skyrocketing in value from 1 to 6, they spent a windfall in gold to get 78 points’ worth of stuff!! 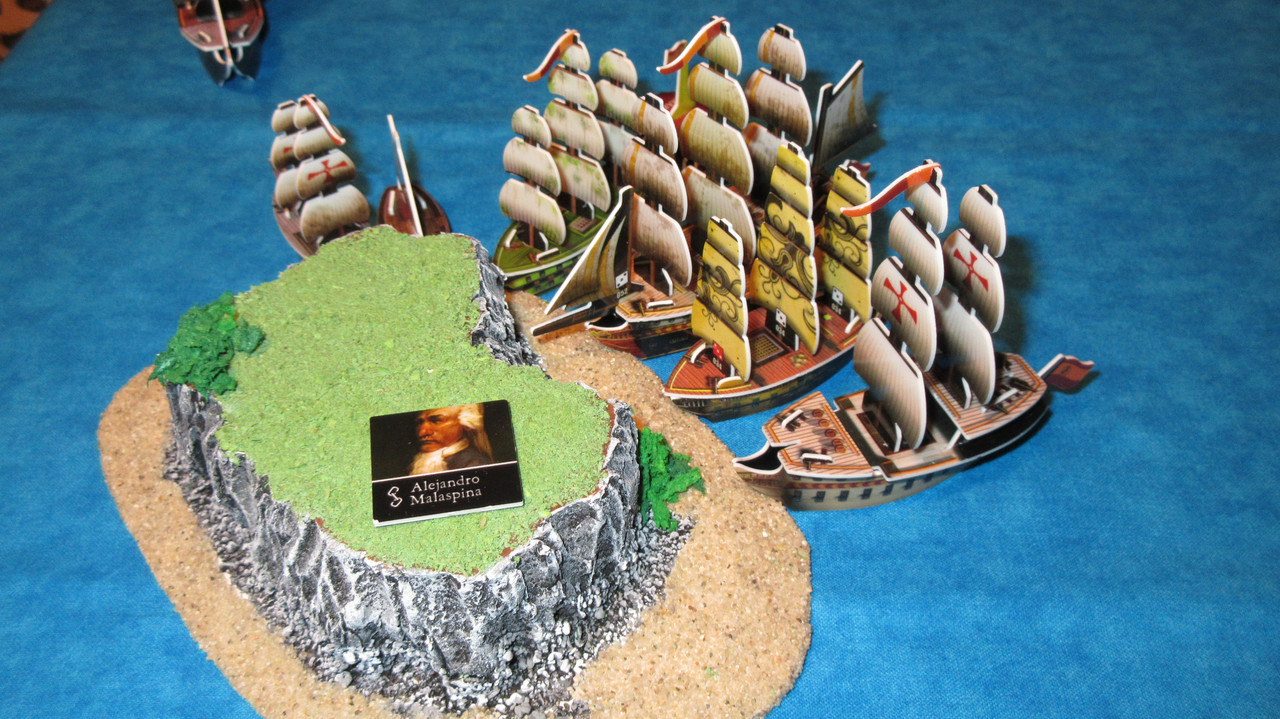 From left to right, the additions are the San Francisco, Alquimista, Diablo flotilla, and La Tartessos. The San Estaban and Matthias Vospero are busy repairing. 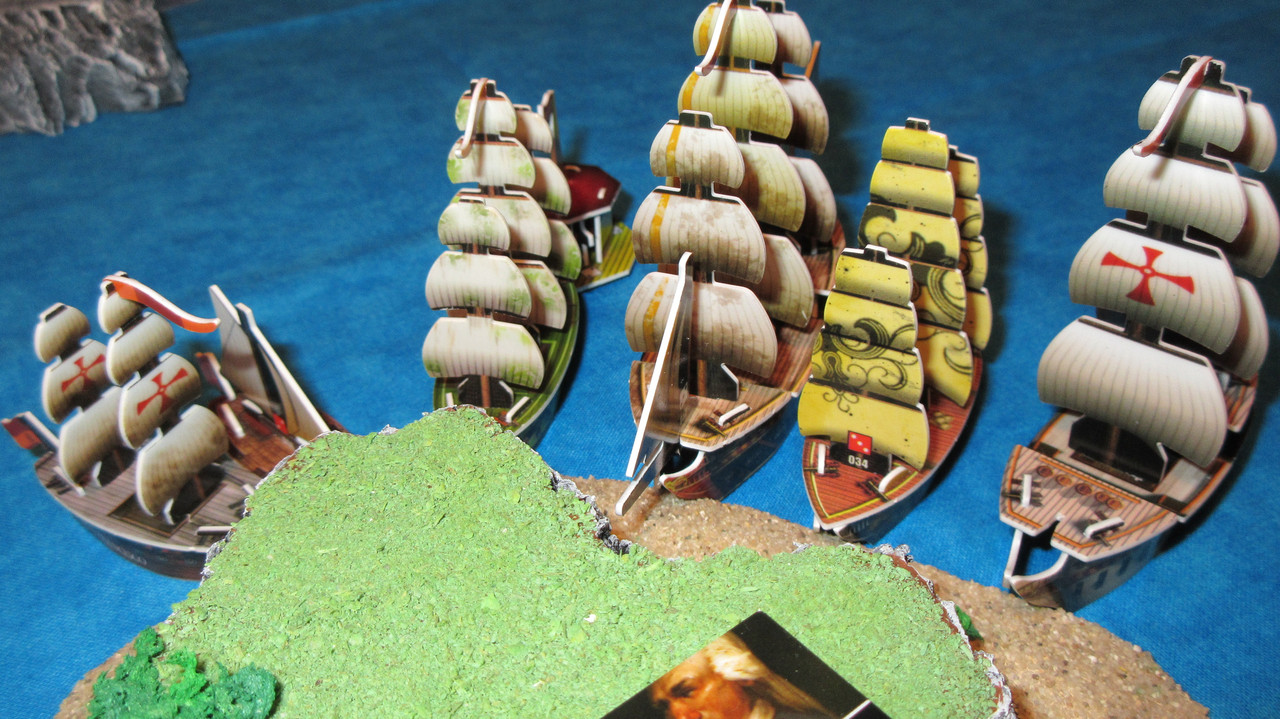 Spending a whopping 30 gold, the Spanish make a huge move and build their best fort, Fortaleza Dorada, on Paradise Island! This gives them sole control over the island’s now-valuable metals, not to mention the immense pile of gold courtesy of the Gold ship! Looks like paradise to me! 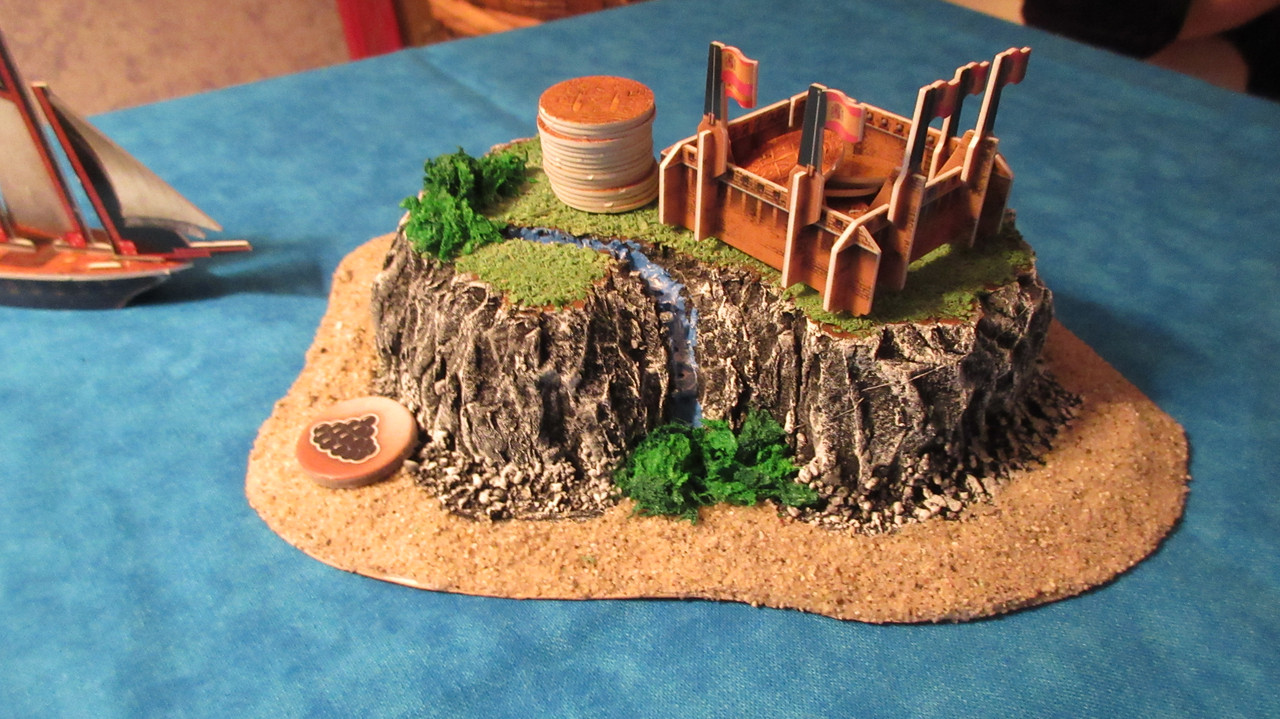 Once again, just insanely perfect flavor text: The Spanish claim it doesn’t exist. Yet natives can be persuaded to speak of the “Golden Fortress,” the apparent source of the Spanish gold flowing along the Crimson Coast. O_O Golden Fortress indeed!

And now we are back in Karkuda, where the French flagships continue to cautiously venture further west, and the French have no good resources around. 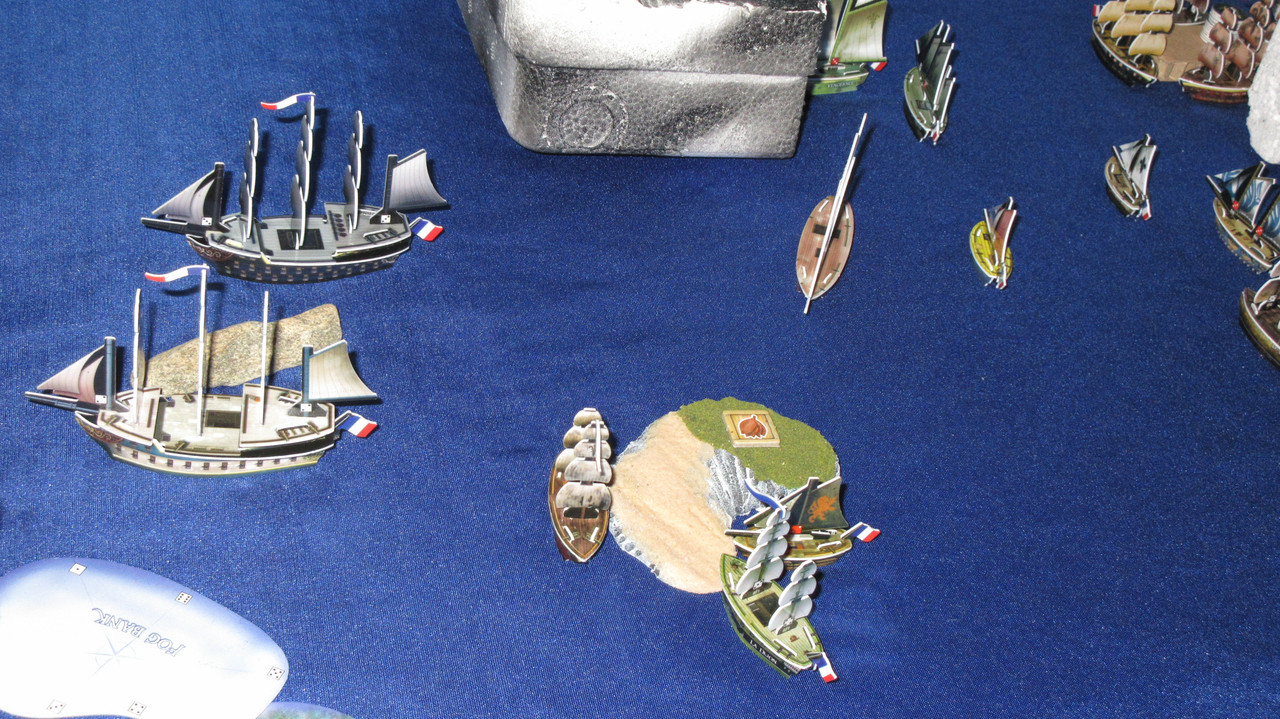 Similarly, the Americans have stockpiles of the 3 resources that aren’t currently valuable: food, spices, and luxuries. However, with a fortuitous change, the Americans could become extremely wealthy in time. For now they are trying to maximize their returns from the big northern island and destroy reefs in order to go east without danger. Notice the Freedom heading straight back to the whirlpool. I wonder what Ralph David is thinking? XD Also, Brent Rice is curious to learn from his fellow fleet mates that Luck and Ruby Islands are no longer producing resources. He is aiming the Bonhomme Richard south to investigate, while Commodore Preble aboard the President sends the Colonial Trader to Ruby Island. Preble is of higher rank, but listens to the wise Rice on making decisions. 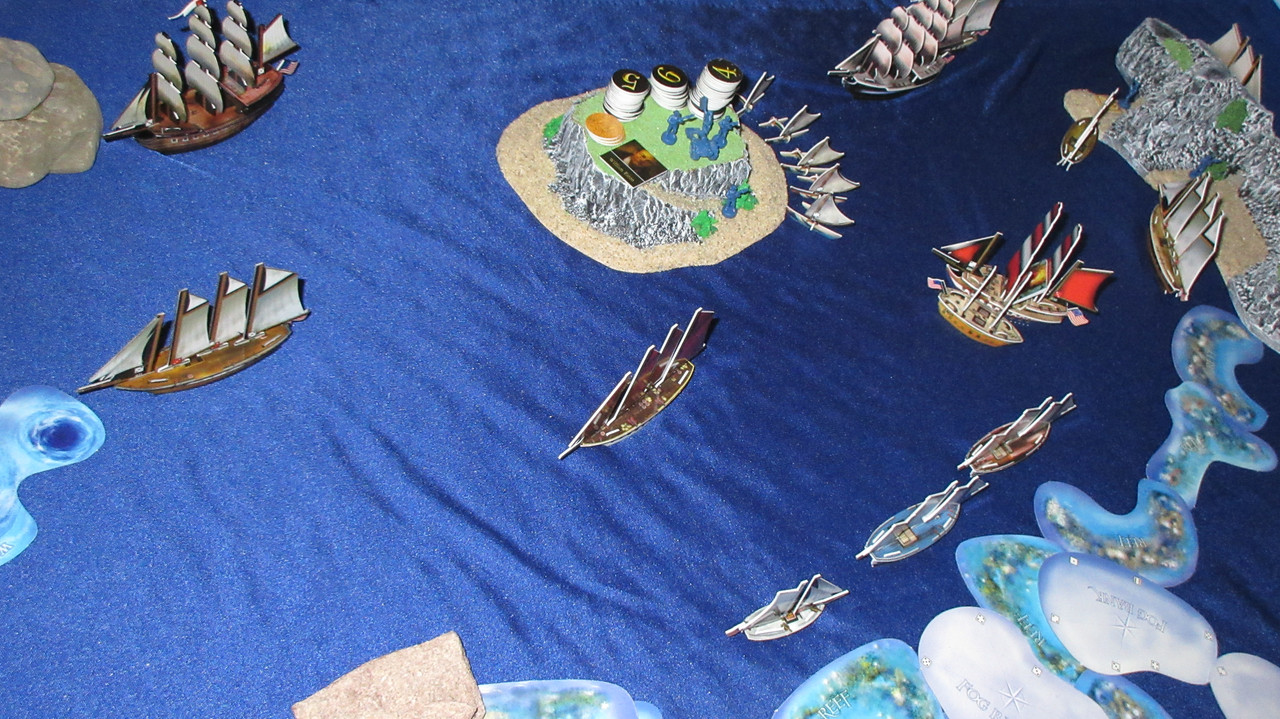 With that, another turn ends. This BR is a great example of just how much can happen on one turn, and the game will only increase in size from here. The JR battle seems to have ended, while the Caribbean is becoming very interesting. With both the English and Spanish out for revenge (the Spanish are mad the English started the conflict, but the English are p*ssed about the loss of the Viceroy), it could become a war zone very quickly.

A few things I noted:
-With really interesting developments happening in the Sea of Allost and the Caribbean, Karkuda feels quite boring by comparison right now. This is mostly a coincidence of the resource change, but it’s a funny thing I noticed.
-Lumber is nowhere to be found. Of all six resource types, lumber is the only one to not be discovered on an island yet.

I hope to play a turn a day for the next 3 days, and hopefully more after that. Much more to come! Thanks for reading, and feel free to comment your thoughts!