Postimage wasn’t working right (“internal server error”) when I tried to upload these pictures, so I used imgur instead.

This is the Cursed Turn 72. The Sea Hag escapes, and the Fallen Angel tries to tow the Jikininki out of the battle area. 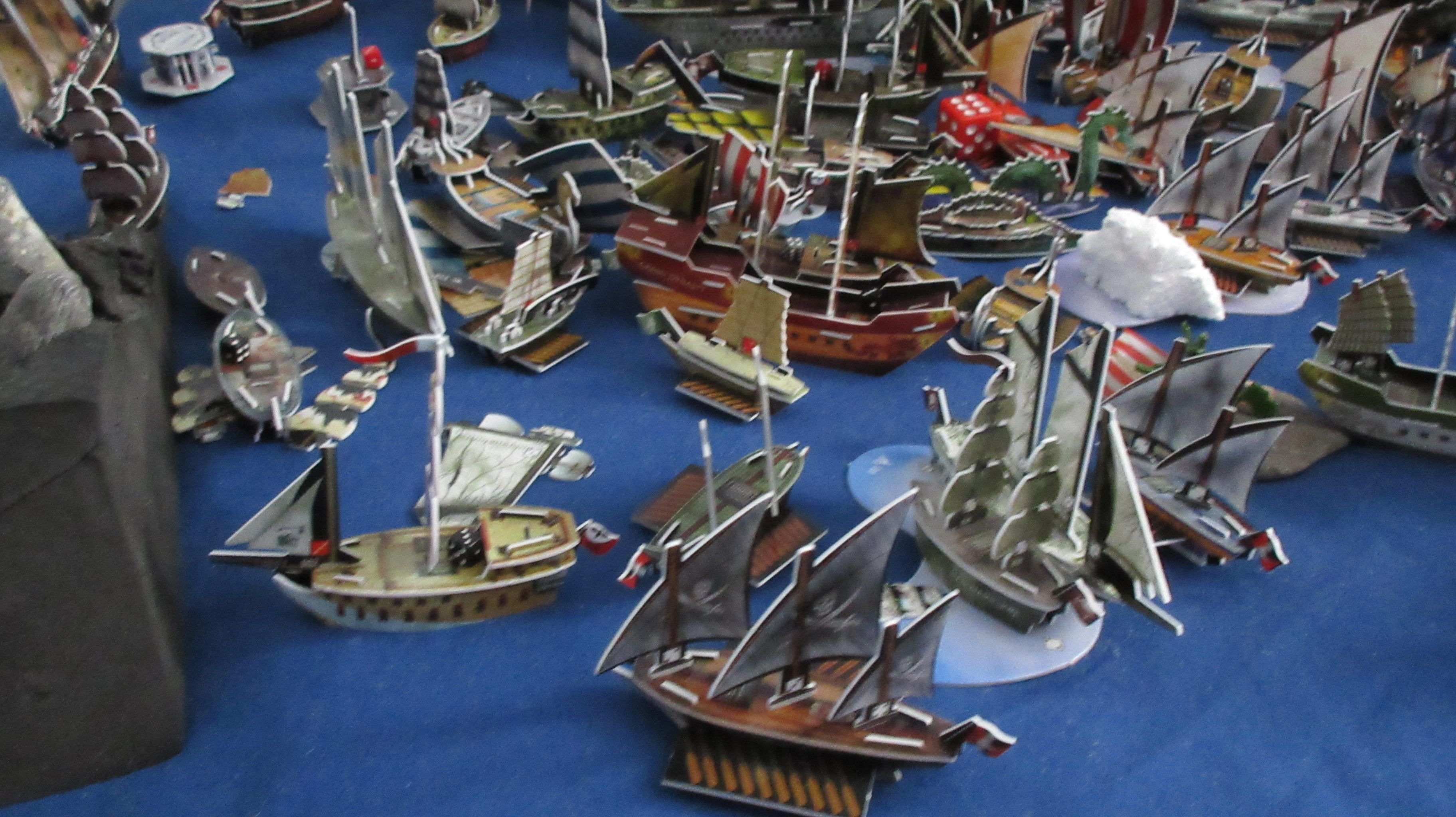 The Hrothgar has been dismasted! However, Cursed gunnery was quite inaccurate in the hottest part of the battle this turn, in the western area. The captured Scorpion is set aflame once again by the Flying Dutchman. 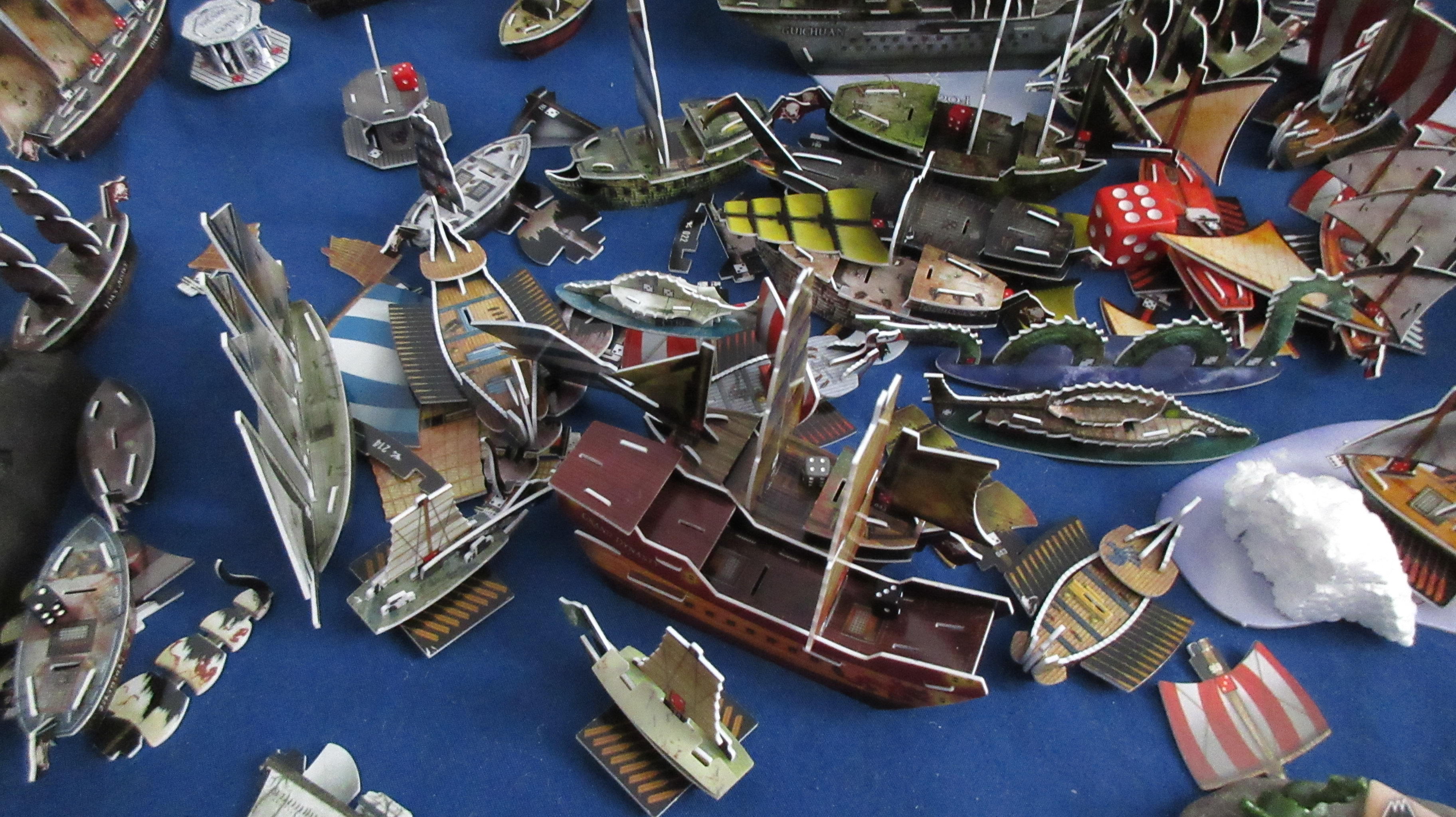 The subs have surfaced! In a desperate slugfest full of hatred, both factions are just trying to put as many shots on hostile targets as possible. Future plans be damned if needed – this is an all-out fight!! 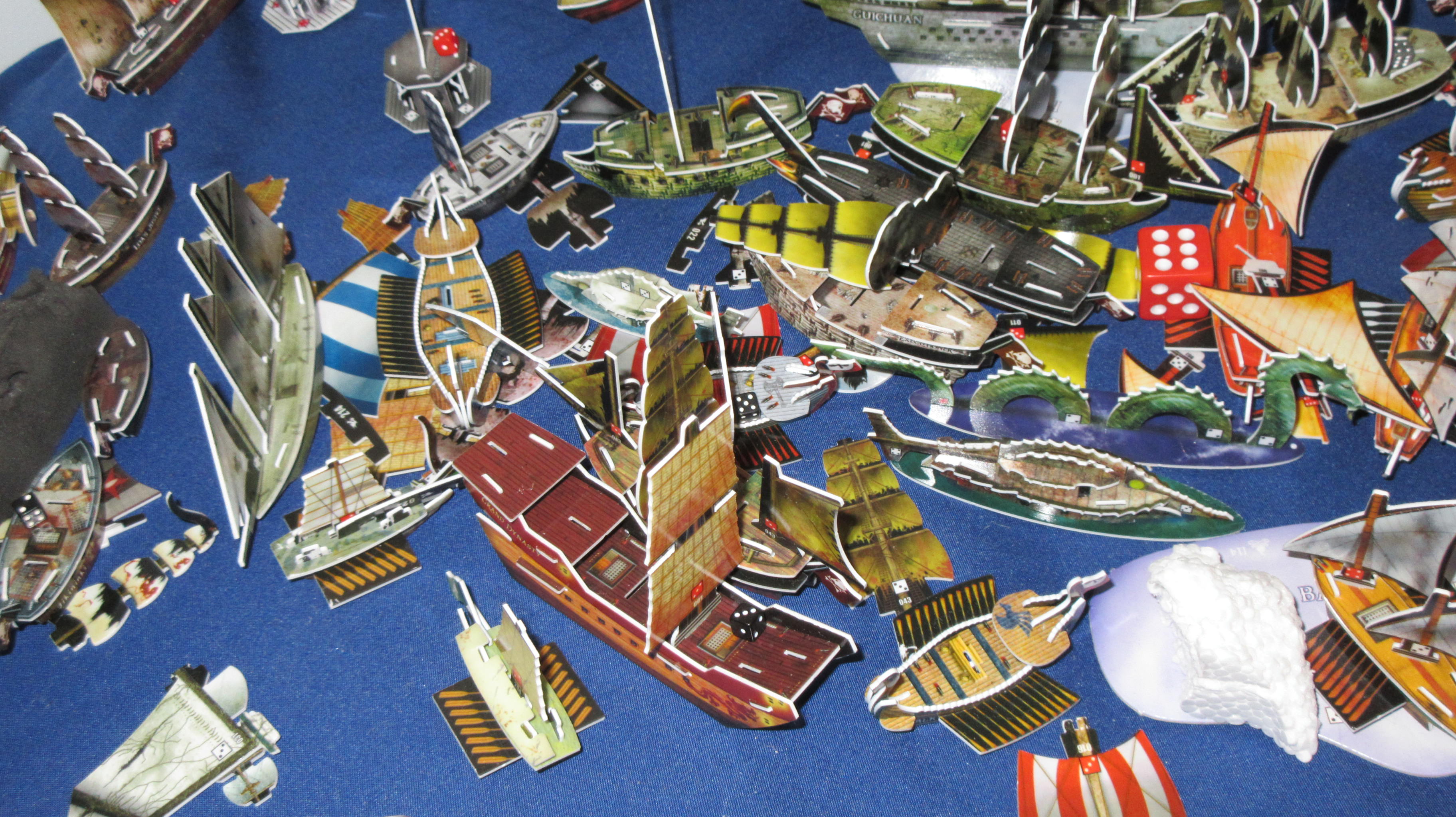 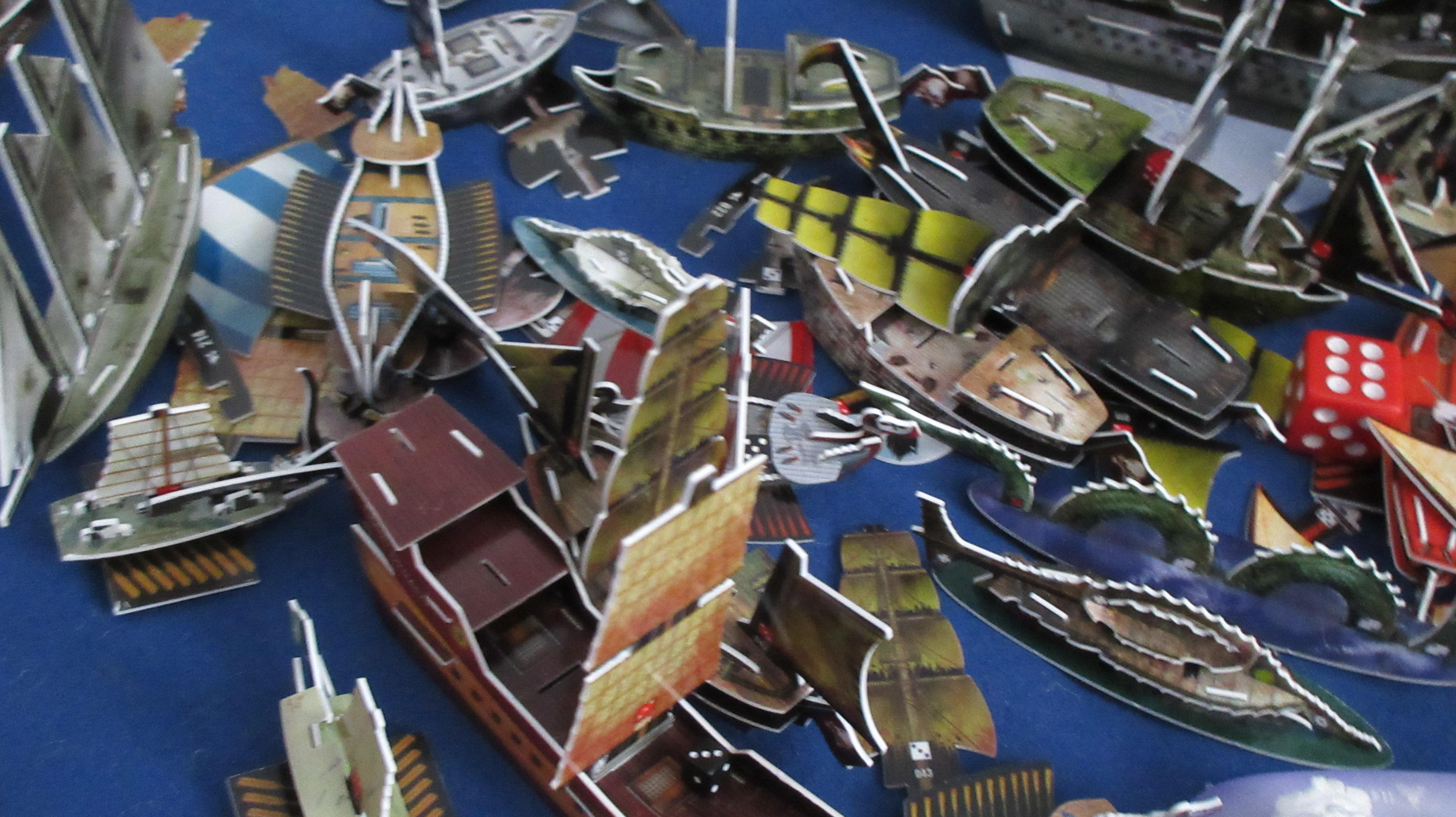 The Fire Djinn is hit with shots and Fear, but the Leviathan (at the left) is still submerged. The Cursed have a strange problem right now: at the top of the photo are the Tiger’s Eye, Donar, and Ivory Star. All of those ships have immunity to L-range guns, and funny enough the Cursed have recently had almost exclusively L-range cannons in that area. However, the Spilled Salt has gotten back in action, though she went 0/3 in her return. 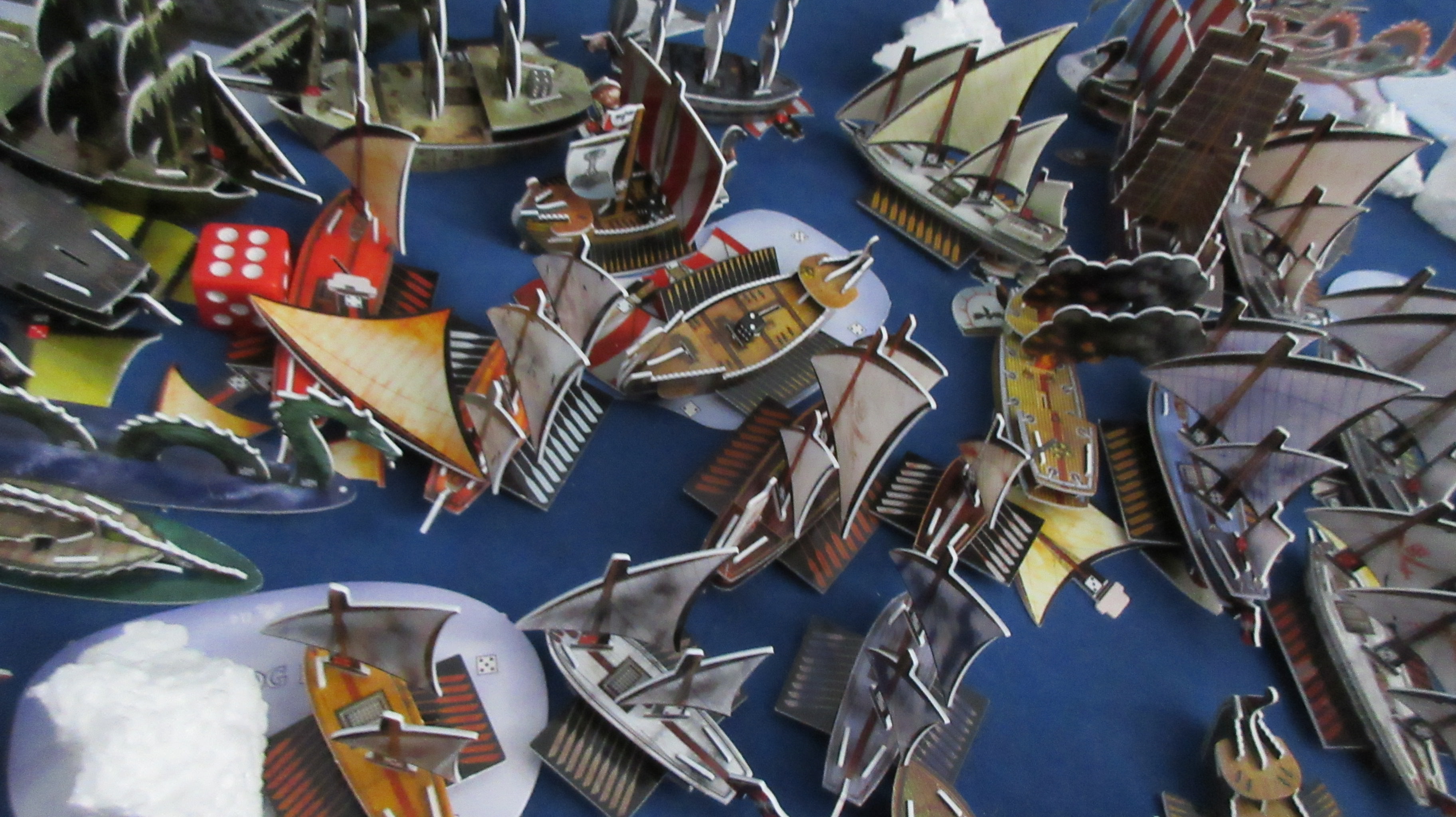 The Cursed gunships in the northeastern area of the battle continue to defy expectations! The Strix dismasts the Loki, while the Rook’s Folly goes 2/4 (on rank-4 cannons) to take a mast off the Meshud. The Knight’s Errant uses her cannoneer to shoot 2/3 and damage the Grand Mountain. 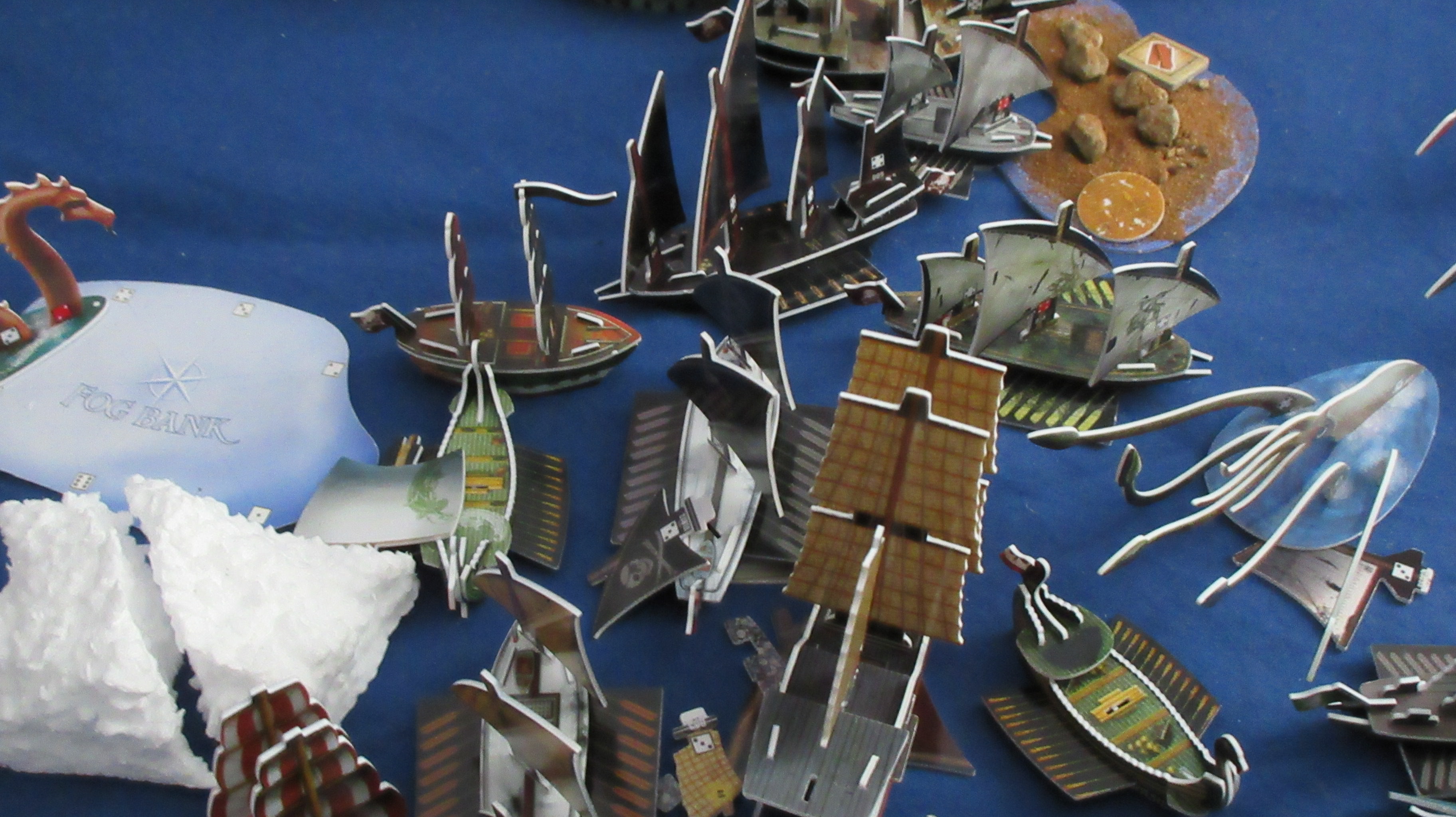 The Cursed sea monsters have nearly reached the battle, while the trio of subpar gunships have somehow held back the tide of Jade ships without even taking damage yet. 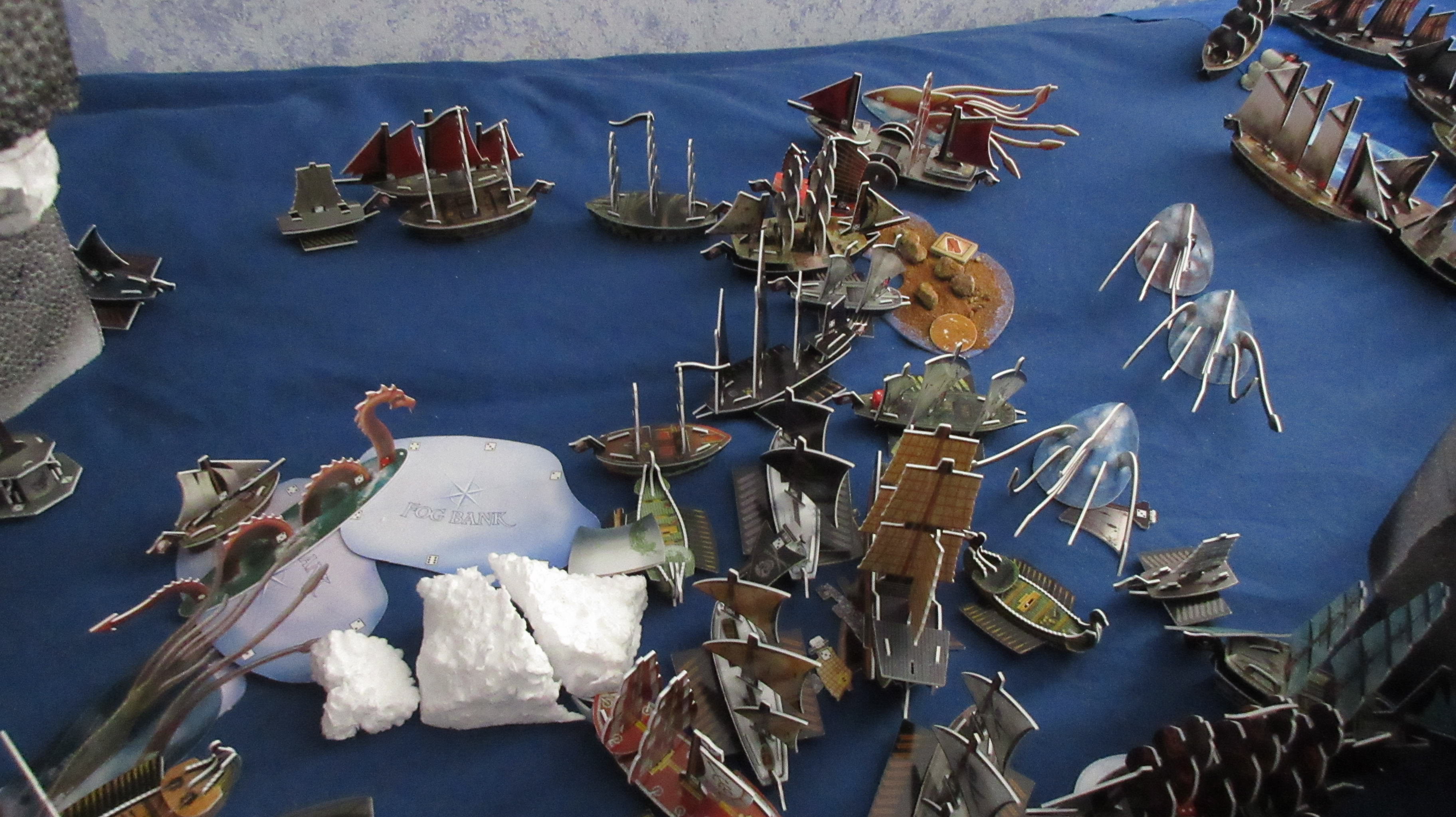 The Guichuan is in a fog bank! Who knows what she might do next turn… Davy Jones could copy the fog hopping ability, or perhaps use one of the face-down UT’s (shown earlier in the game atop the Roost) for an advantage…. In addition, the Cursed have some reinforcements coming! Brachyura has finally left its spot behind the Roost and may attack soon. Terrox becomes the last Cursed game piece to return from the Sea of Karkuda, having lost just one segment to the Geographe. Various Cursed ships return home for repairs and to unload food. 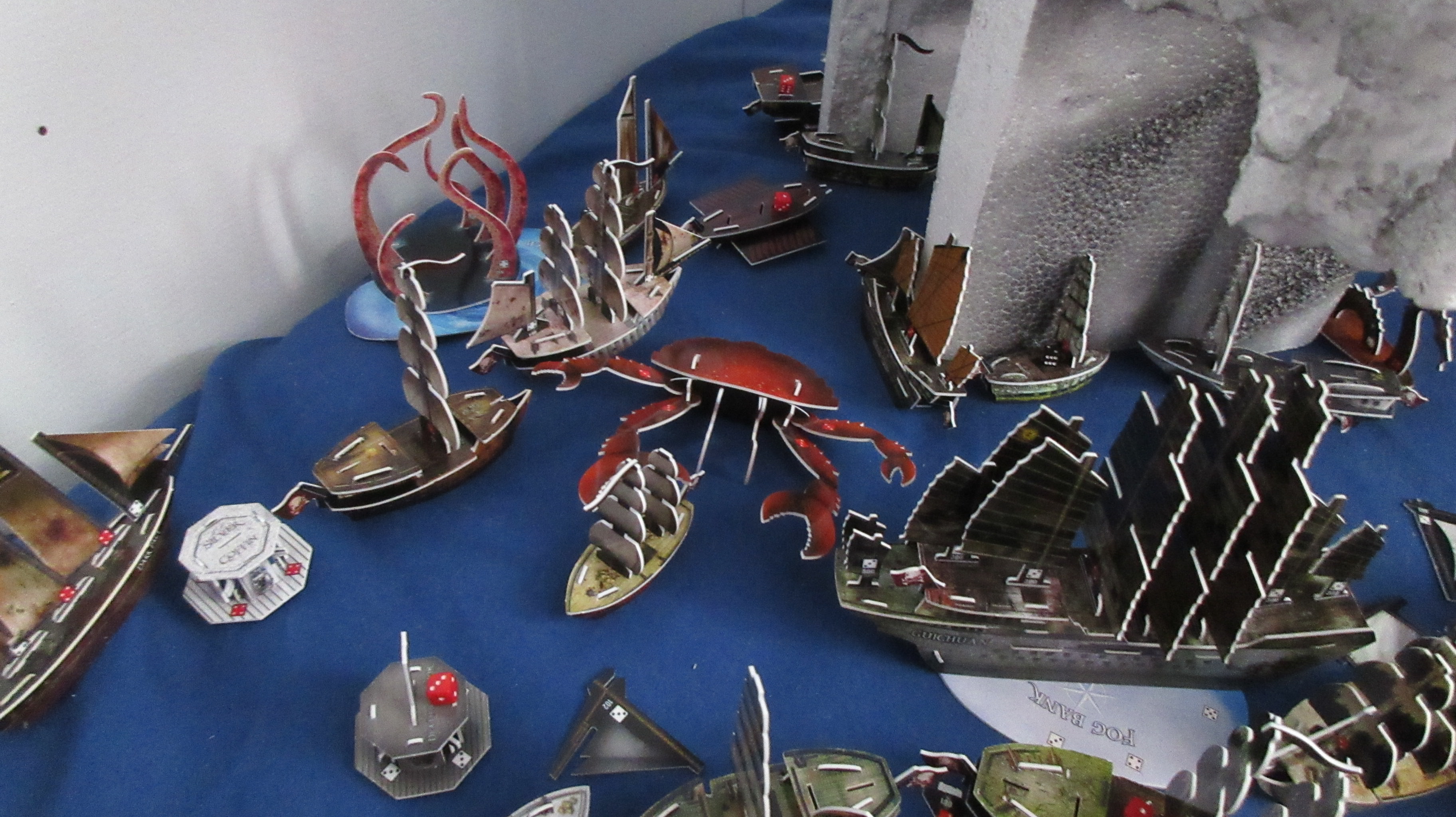 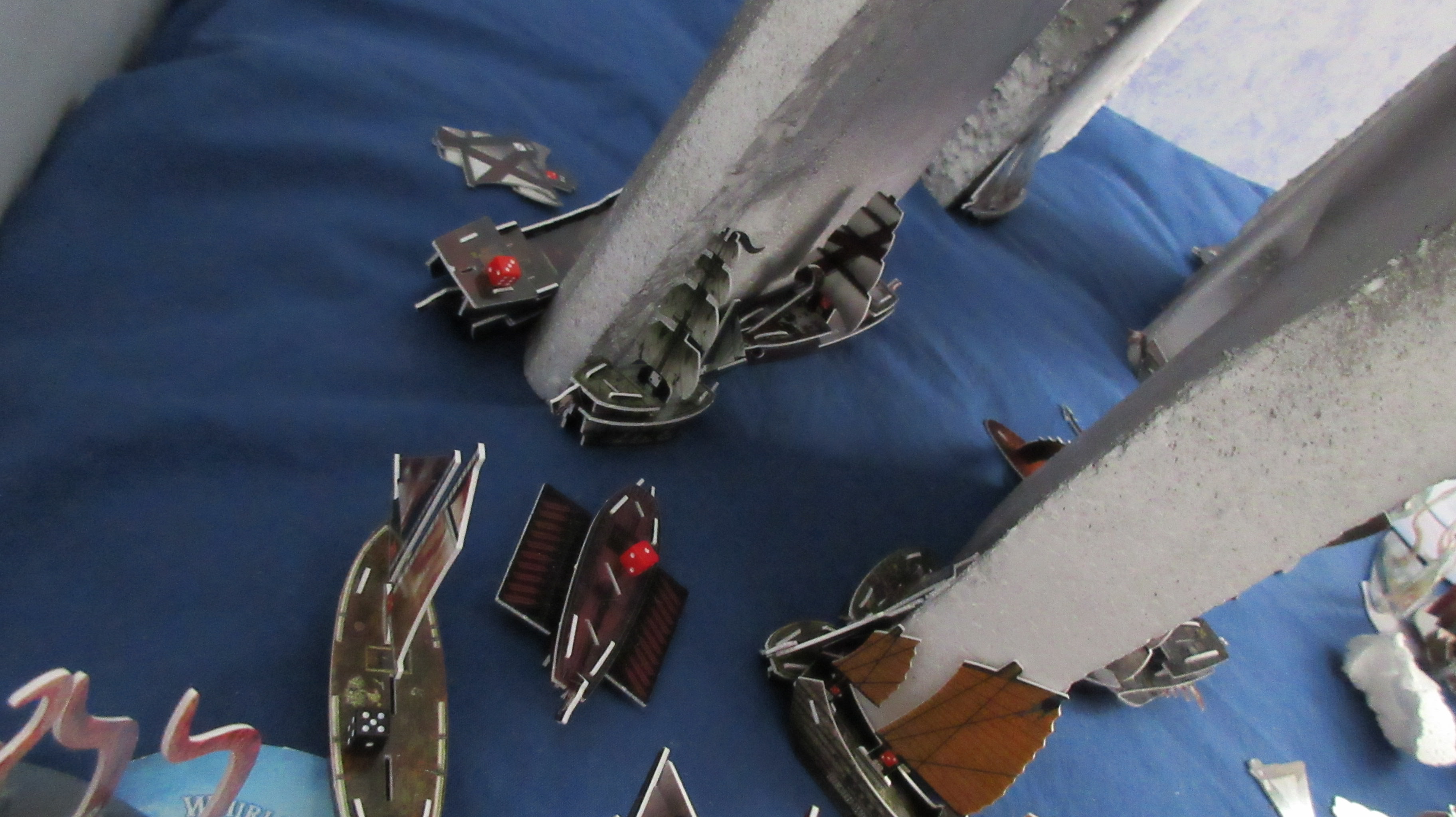 The Cursed don’t have much spending power these days, but the Grim Reaper is launched! She carries a nice complement of fighting crew to optimize her effectiveness, and the Cursed also relaunched a Death’s Anchor flotilla. The Grim Reaper will give the Cursed a much-needed presence in the middle area of the battle where you can see the Serpent’s Fang defending the entrance to the Roost itself (all by herself). 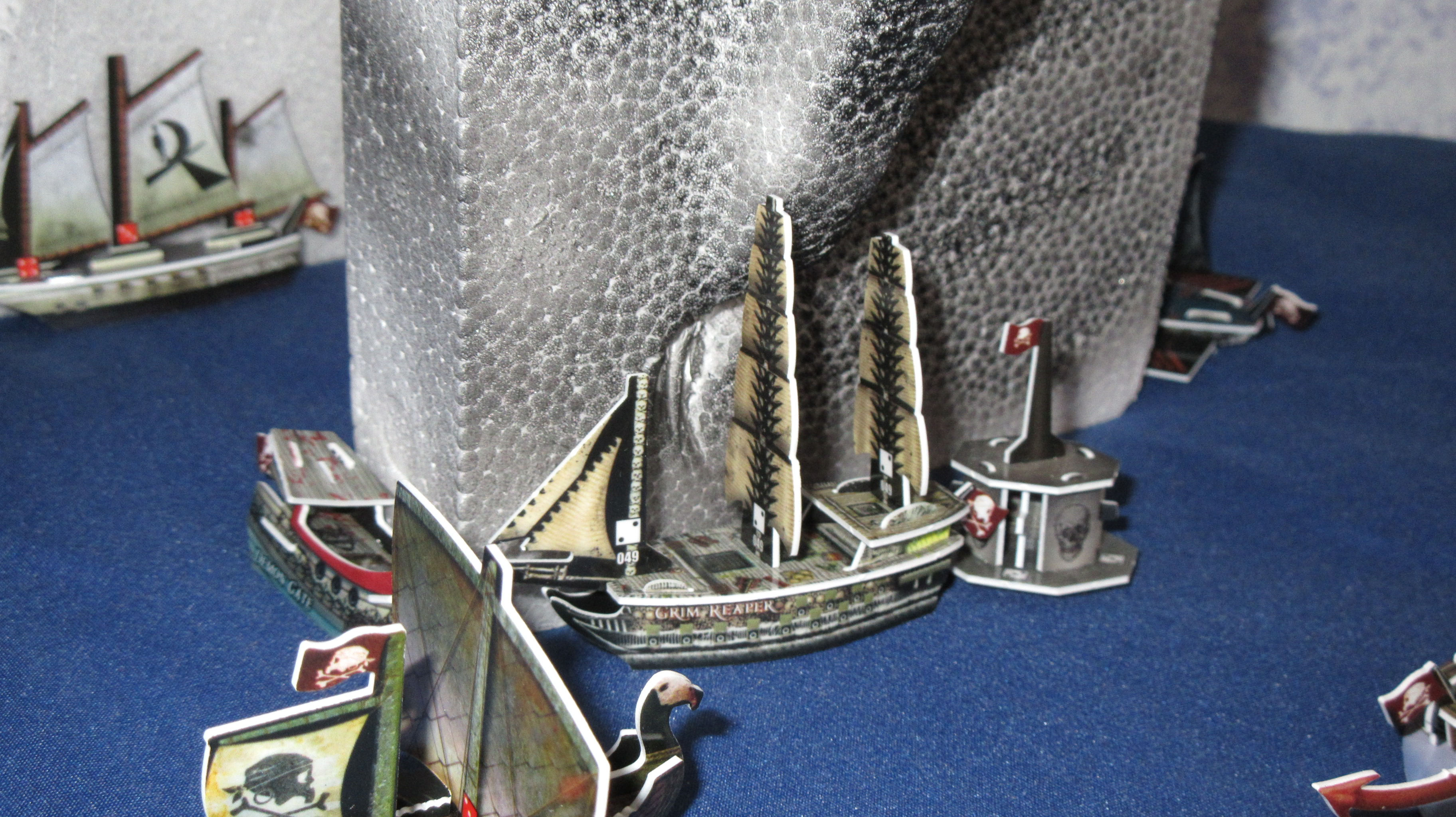 Pure carnage, with desperation and exhaustion taking over in the western area of the battlefield: 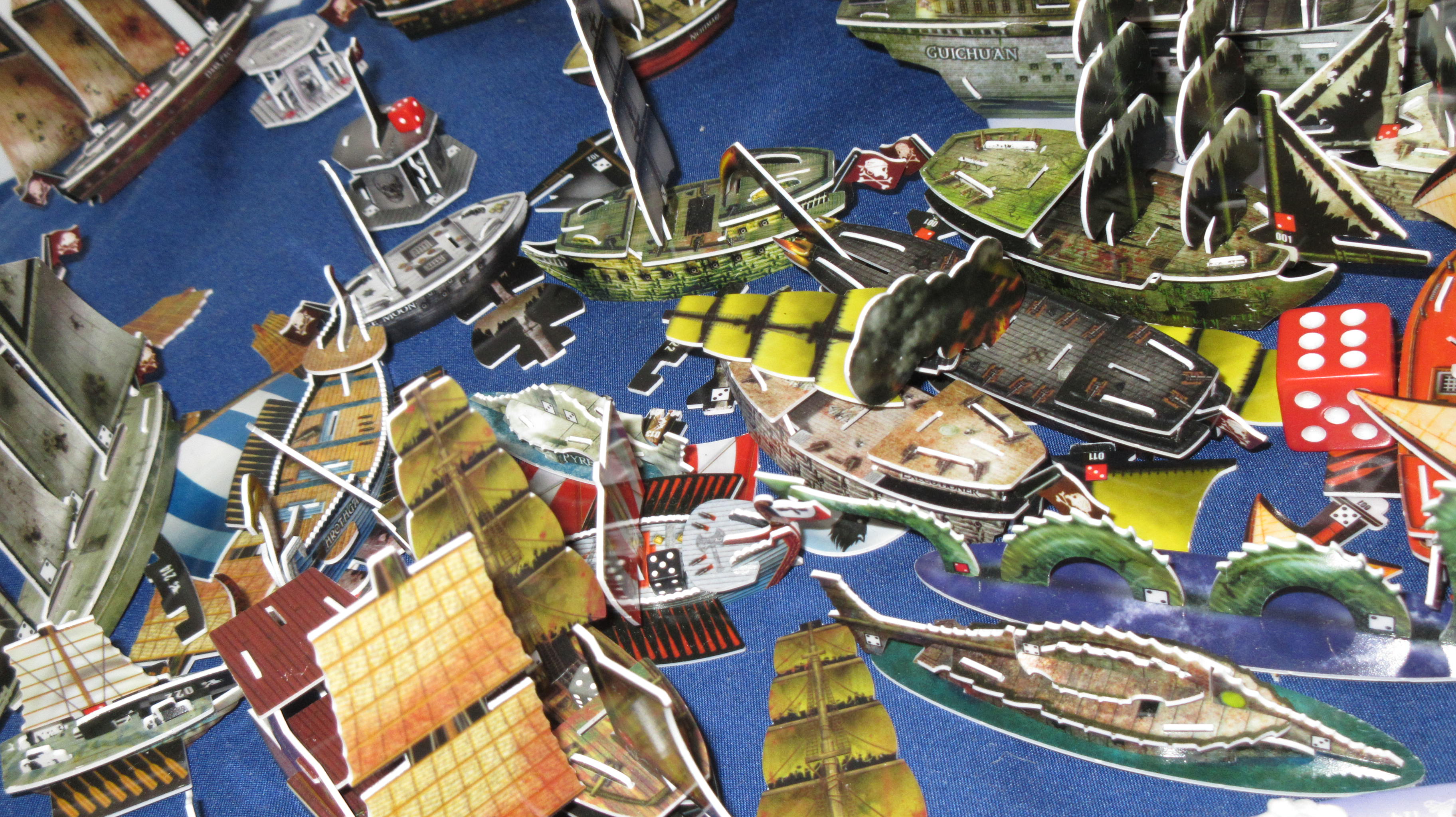 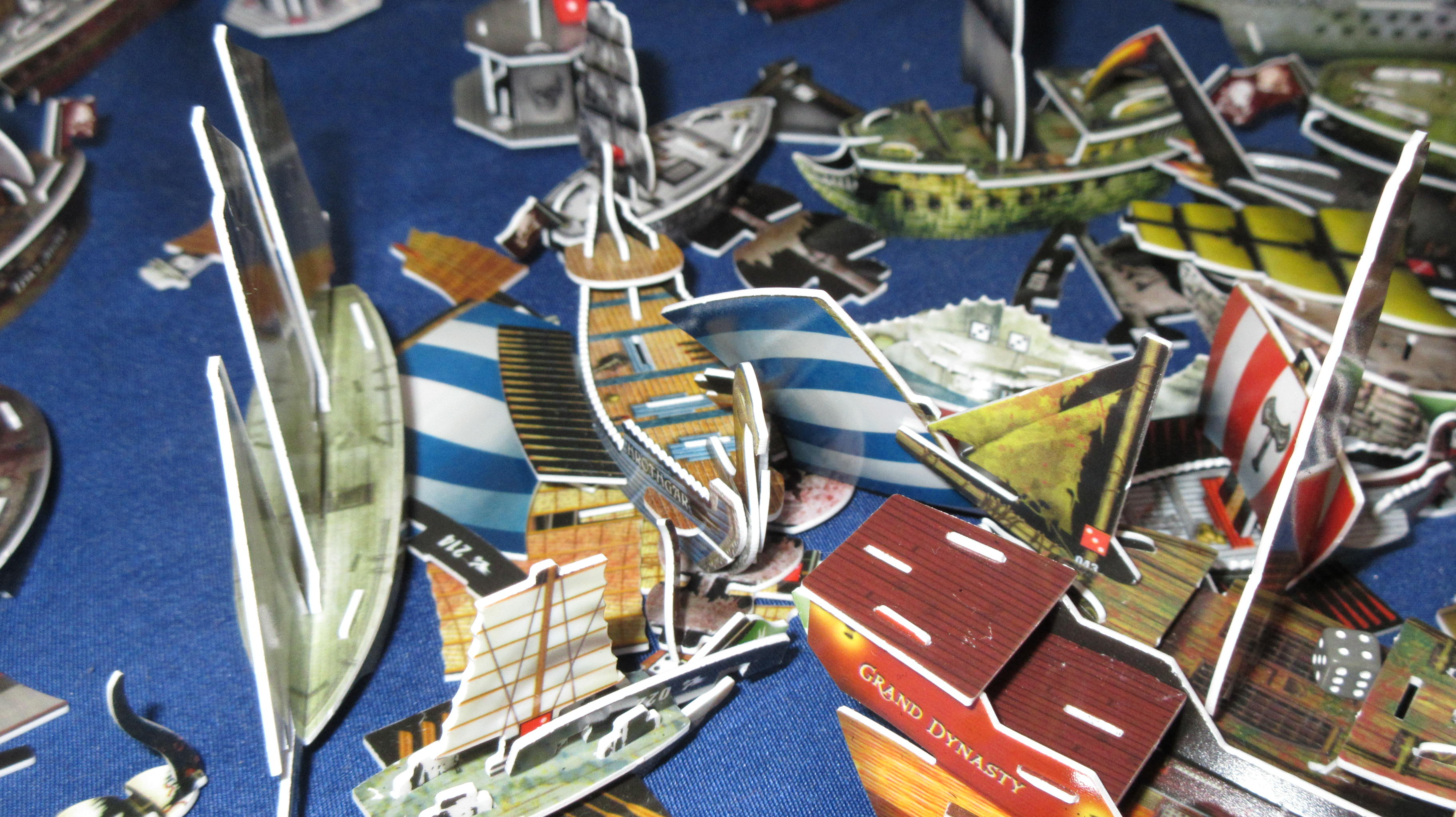 I thought I’d end this short report with the “faction situation analysis” that I’ve been hinting at.

Alliances:
French/Spanish (growing stronger by the turn in the Battle for the Castle)
English/French (weak/French don’t care about it right now)

Wars (faction who declared war listed first)
Jade Rebellion-Cursed
Americans-Pirates
Americans-French
Spanish-Americans (may have forgot to mention that the Spanish declared, but I guess it was pretty obvious lol)
English-Pirates

In my opinion, the Pirates and the French are in the best position to win the game right now. They have the largest fleets and considerable home island areas that will be difficult to penetrate by attack. The Cursed and the Pirates are probably the most-hated factions, though the Americans are at war with three different factions right now.

The English are in my opinion the dark horse candidate. However, their embarrassing blowout loss to the Pirates has put a serious dent in their hopes.

The Jades and Cursed hate each other more than any other two factions, and it’s quite possible that this battle (the fourth major engagement between them I think) will run until one faction is decisively victorious and the other possibly eliminated. The Jades would do well to ally with some of the non-Sea of Allost factions, but they still have not visited either of the other two oceans.

The French have major leverage, with two allies who both originate from the Caribbean. However, being on bad terms with the other two largest factions (Pirates and Americans, who combine for about 3,500 total points lol) means they will likely have to fight like hell to finish first.

The Pirates have adopted a home defense/isolationist strategy, but have the most enemies of any faction in the game. Only the Spanish don’t dislike the Pirates, and that is more from lack of contact than anything else. The Jades and Cursed aren’t particularly fond of the Pirates, but the Pirates dislike those two more than those two dislike the Pirates (Cursed wanted the French to turn on the Pirates but don’t want to fight them right now, while the Jades are neutral against the Pirates but feel they need to be hit so they don’t run away with the Sea of Allost once the JR-Cursed situation runs its course). The English, French, and Americans all hate the Pirates, and the Mercenaries aren’t fond of them either of course. (due to the Cursed attack on the French, the Mercs would have got wind by now of the Celtic Fury being in the Pirate fleet)

It will be interesting to see if any of the factions can mend any broken relationships, and if any potential surprise alliances can shake up the game. In the meantime, there’s a lot of animosity. XD Of course, what else would you expect from a crowded campaign game with 8 factions, over 9,000 points, and 71+ turns in the book?