Turn 69 begins as the game reaches its third calendar month! (it started in early September)

Forgot to do it until this new round of turns, but the Metal Dragon escaped from Allost on the last English turn. The Zephyr is captured, while the Stoneheart continues to head west. 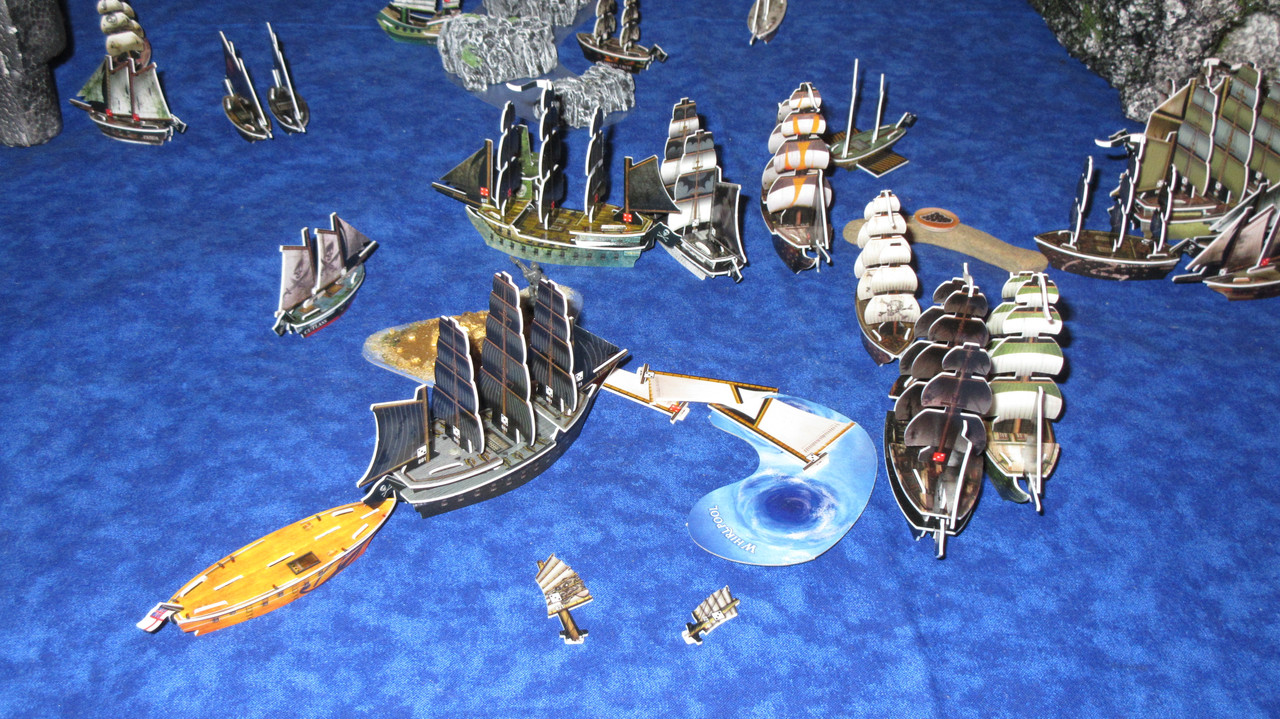 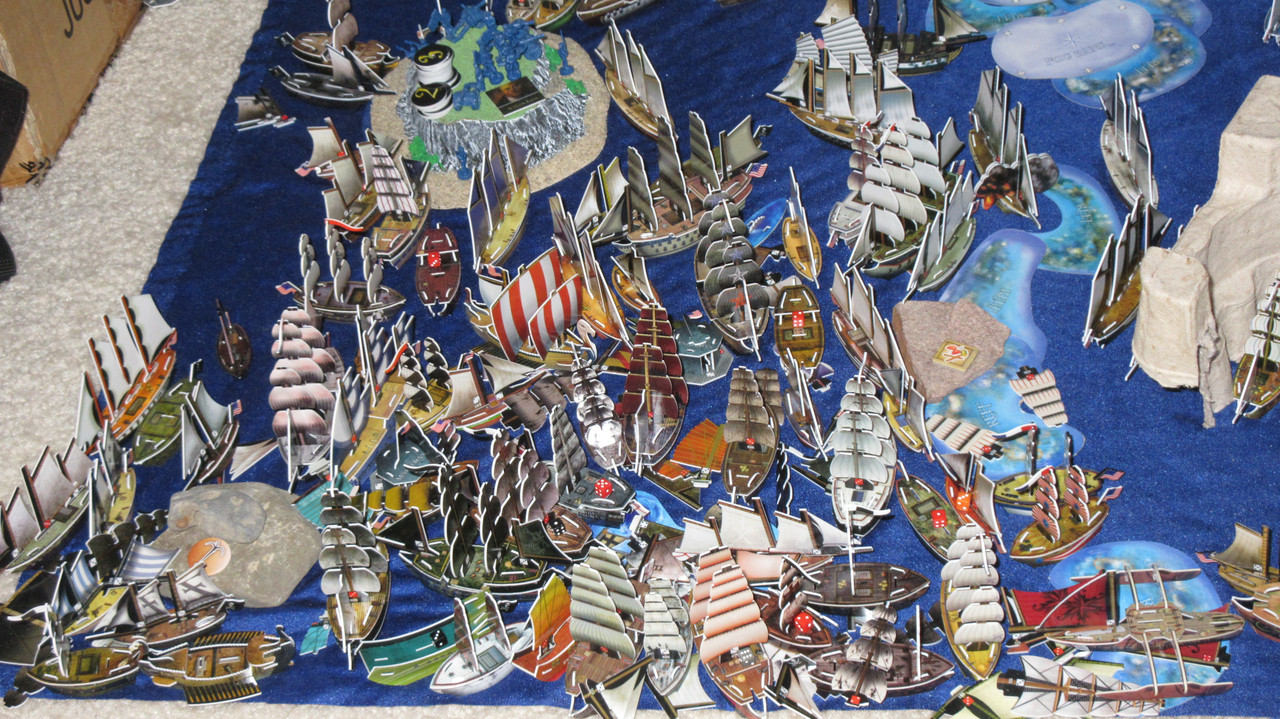 The Pirates actually had a very good turn here for the first time in a while, and similar to the American turn, more progress was seen at the battle than usual. The Full Moon tows the Thrud out of harm’s way, while the Zanzibar knocks a mast off the Fly with 2/2 shooting. After the Dolphin sank a Minuteman flotilla, the Jaguar’s Spirit was able to get to the bow of the Fuchuan and initiated towing. The fresh Jape shot 2/2 to set the James Madison (OE) alight, dooming the ship. 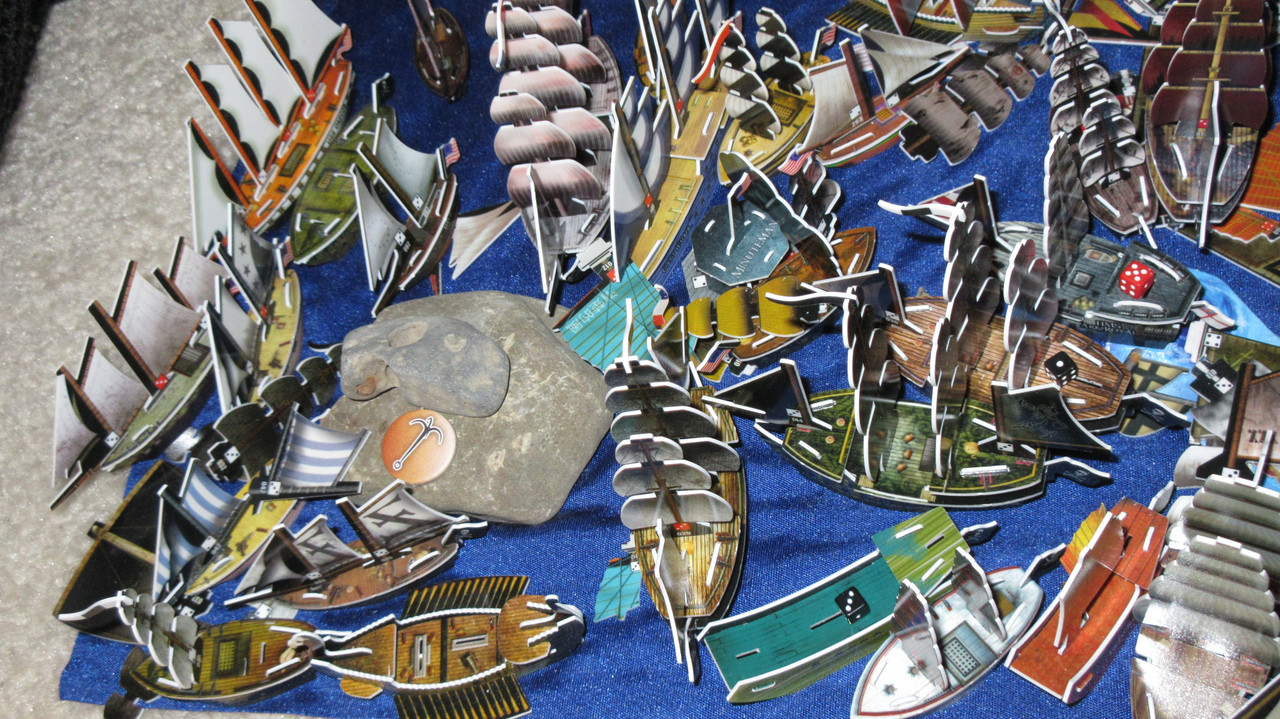 The Bonny Kate towed the Silverback, and a new Pirate ship arrives from the Sea of Allost! The Bruja is back! The Bruja was captured and later traded in by the Americans, and now the Pirates have her back to get revenge. The Satisfaction used her shipwright to repair a mast, and the Bruja towed the Ningpo. However, where did the Silverback and Ningpo go?? 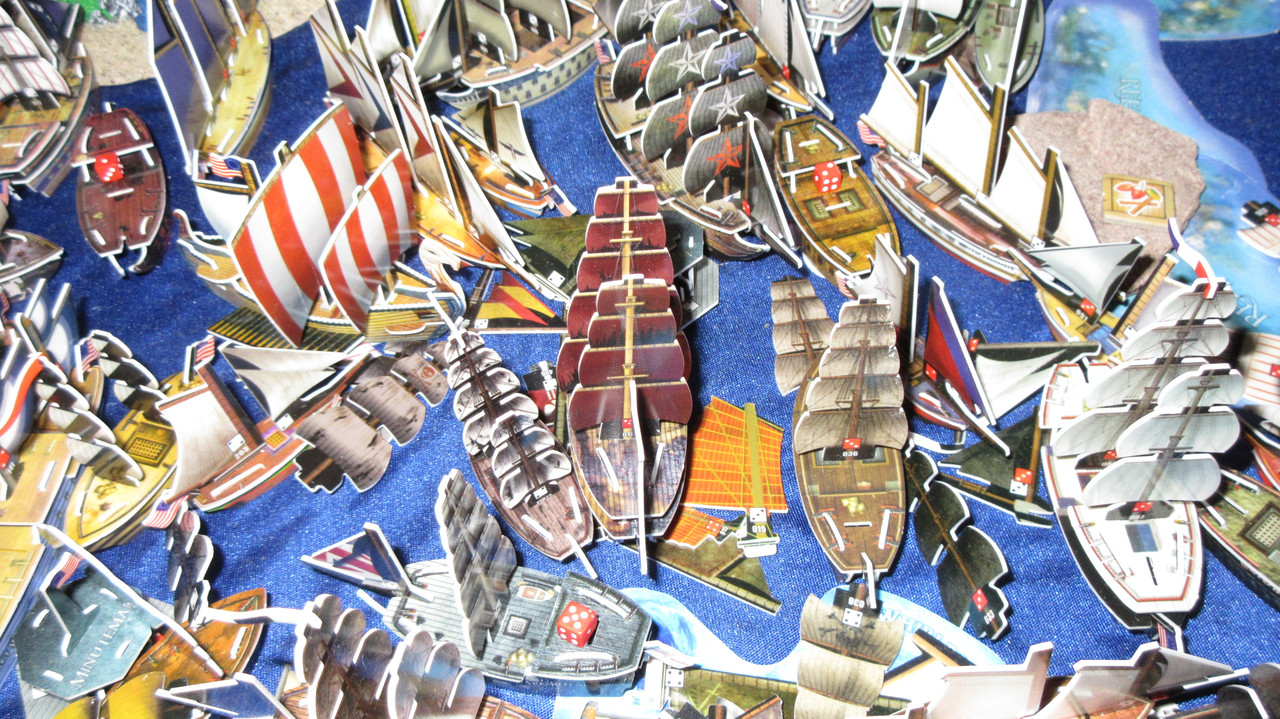 Through the whirlpool and back into the Sea of Allost! The ships were on the Karkuda whirlpool after being moved from the tows, and the Pirates had them sent home for repairs! This could be a brilliant strategy by the Pirates, who are appearing more lively than they have recently in terms of the American battle. 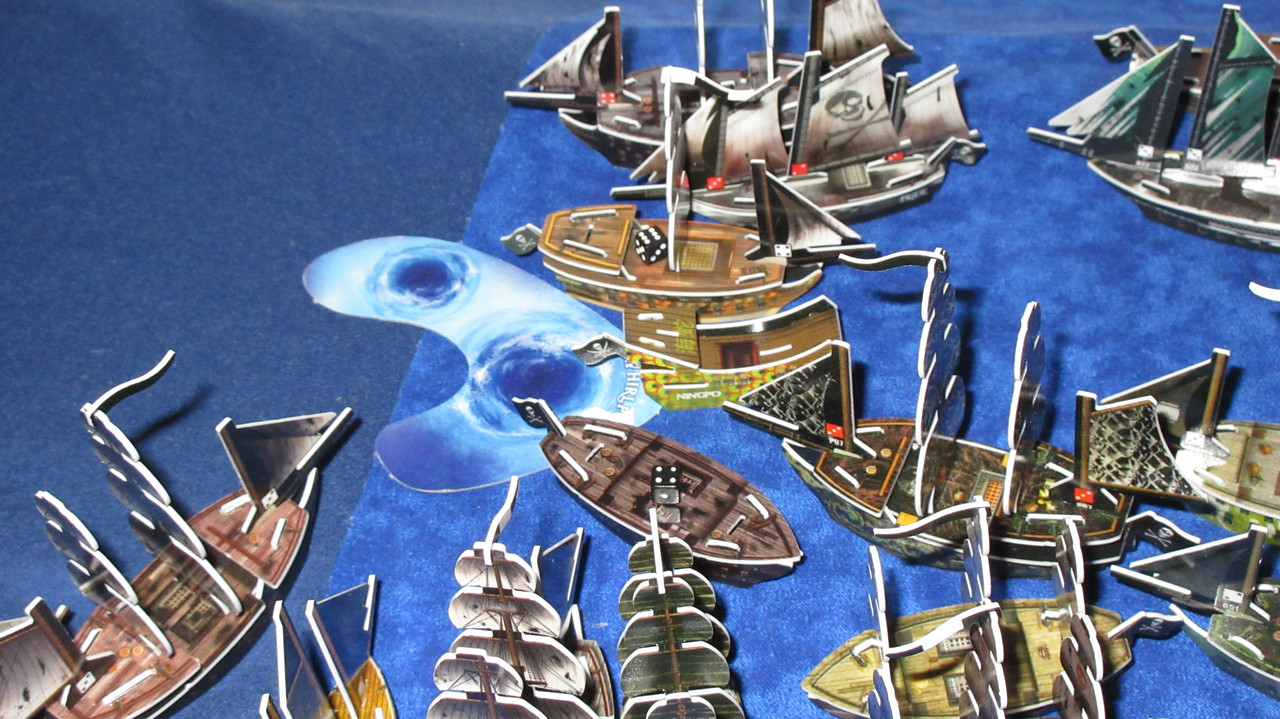 Through the magic of chain towing, the Silverback and Ningpo are nearly back to Dead Man’s Point where they can repair. However, where did the Obago, Pride, Ballista and others go? 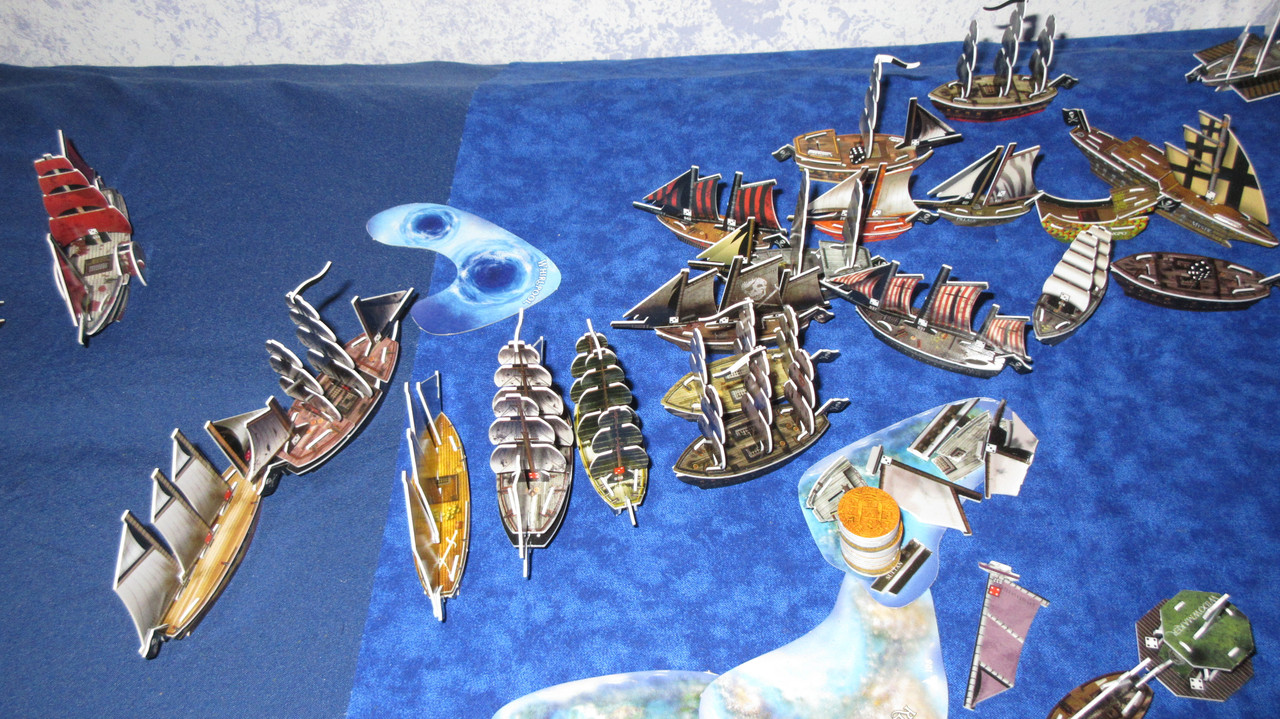 To the northern whirlpool in the Sea of Karkuda! Having generally lost at least the first phase of the battle against the Americans, the Pirates are trying a new strategy. They will try to recruit French help and come at the Americans from a different angle! The captains of the various Pirate gunships speak with Lenoir, who is in high demand after agreeing to an alliance with the English via the captain of HMS Forge. Lenoir is caught in between: a very complex situation forces him to give the Pirates a non-answer for now, but the French ships west of The Flat will at least get out of the way so the 6+ Pirate gunships can attack the Americans if they want. The French want to support the Pirates’ efforts against the Americans, but the Cursed invasion has put them on the defensive. Things have been made more complicated with the recent Spanish incursion to the Castle, which has escalated Franco-American tensions right near this area. In addition, the situation is even more complex than I can divulge here! 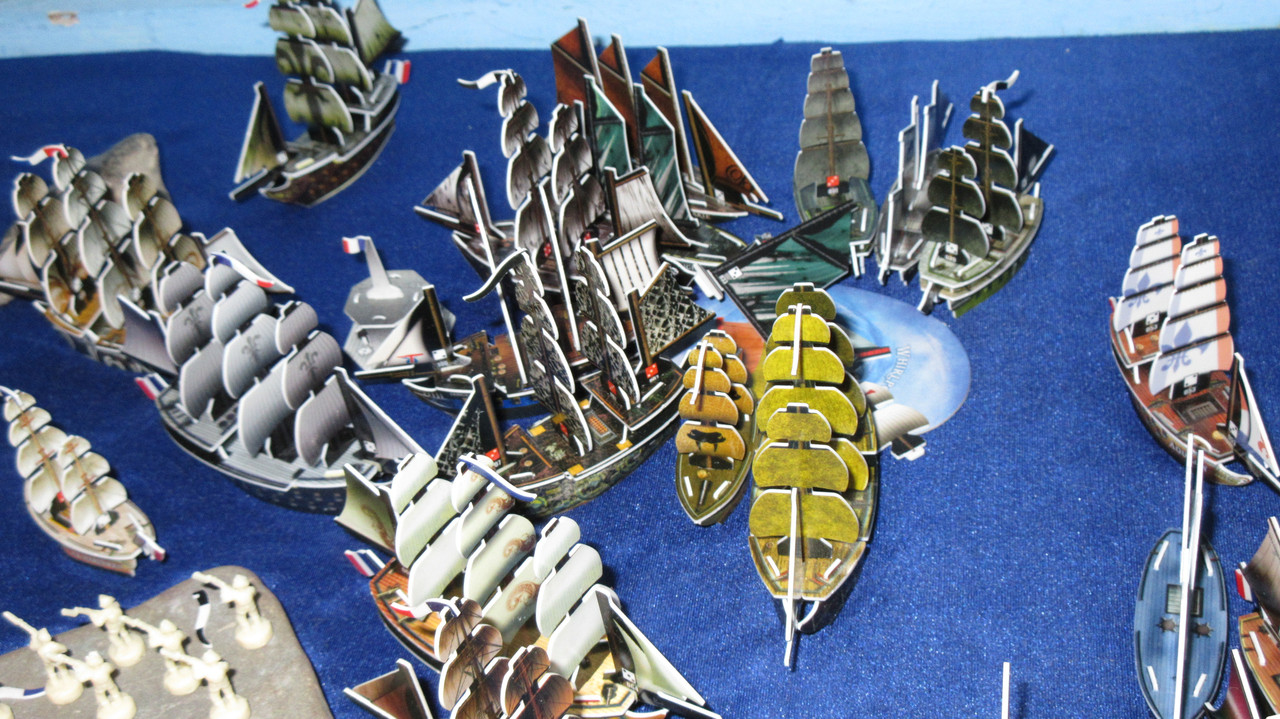 Pirate ships advance even further into the Tunnel, with the Panama Sun and Ranger preparing to transfer infantry units to the Celtic Fury…. 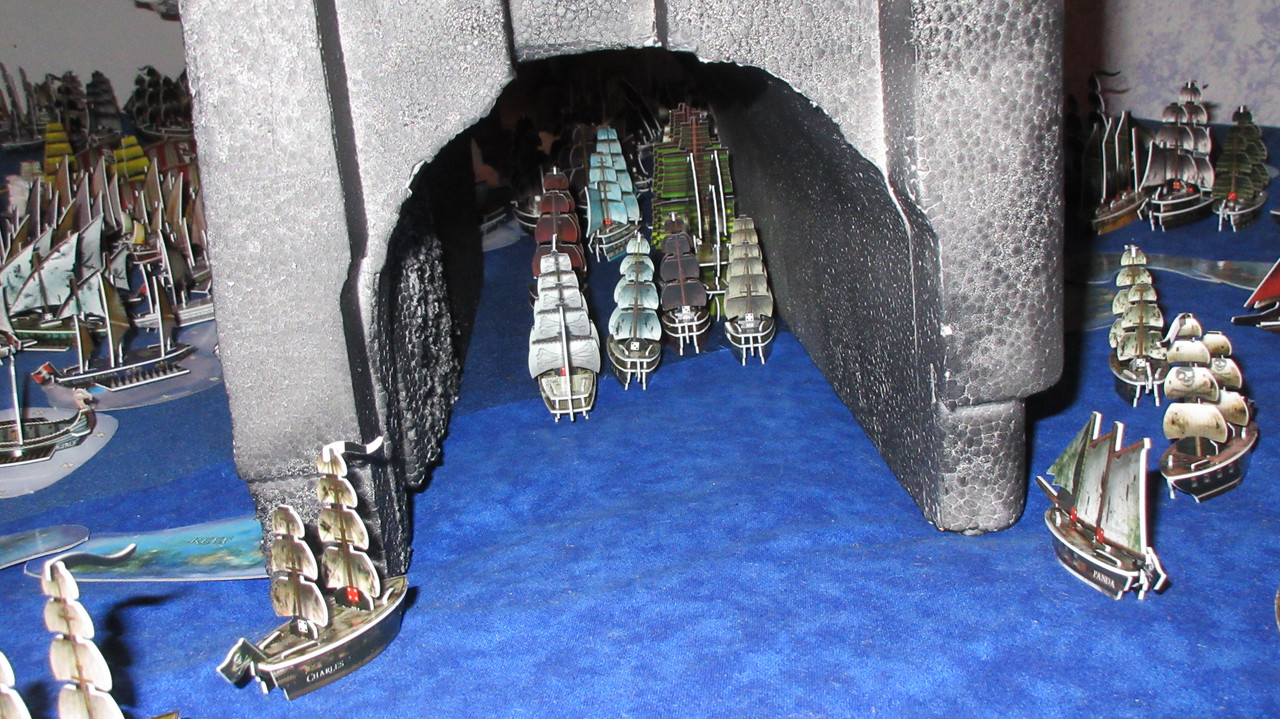