This report is for the big American turn of Turn 68!

The Americans’ actions signal a shift in their strategy! The Speedy Return captures the Lucky Seven, who doesn’t get wrecked on the reef. Barring any crazy Pirate moves that interfere, the Philadelphia will warp the Lucky Seven to the American HI next turn. At the left, getting the LS out of the way allowed the James Madison to turn south and begin towing the Georgetown. 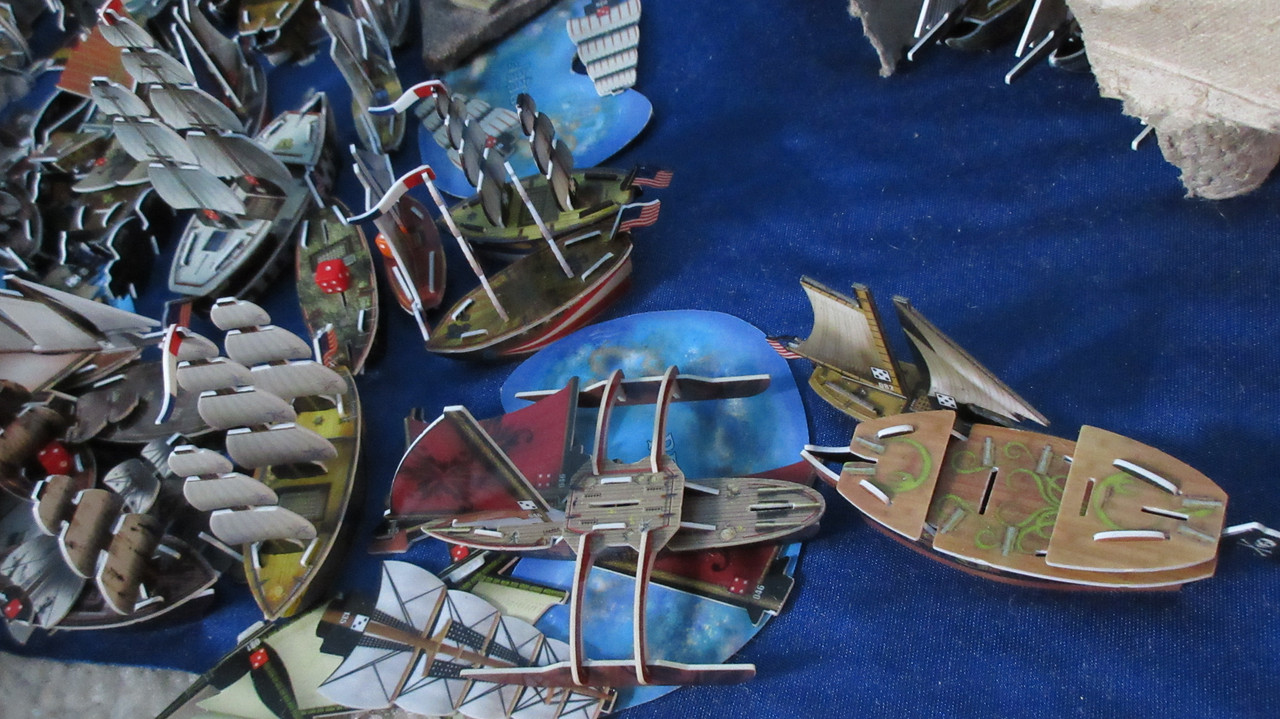 This exposes the JM and Georgetown to Pirate cannons without firing on the American turn, but it should be worth the risk since the Pirates only have 2 masts standing on those 3 nearby ships. 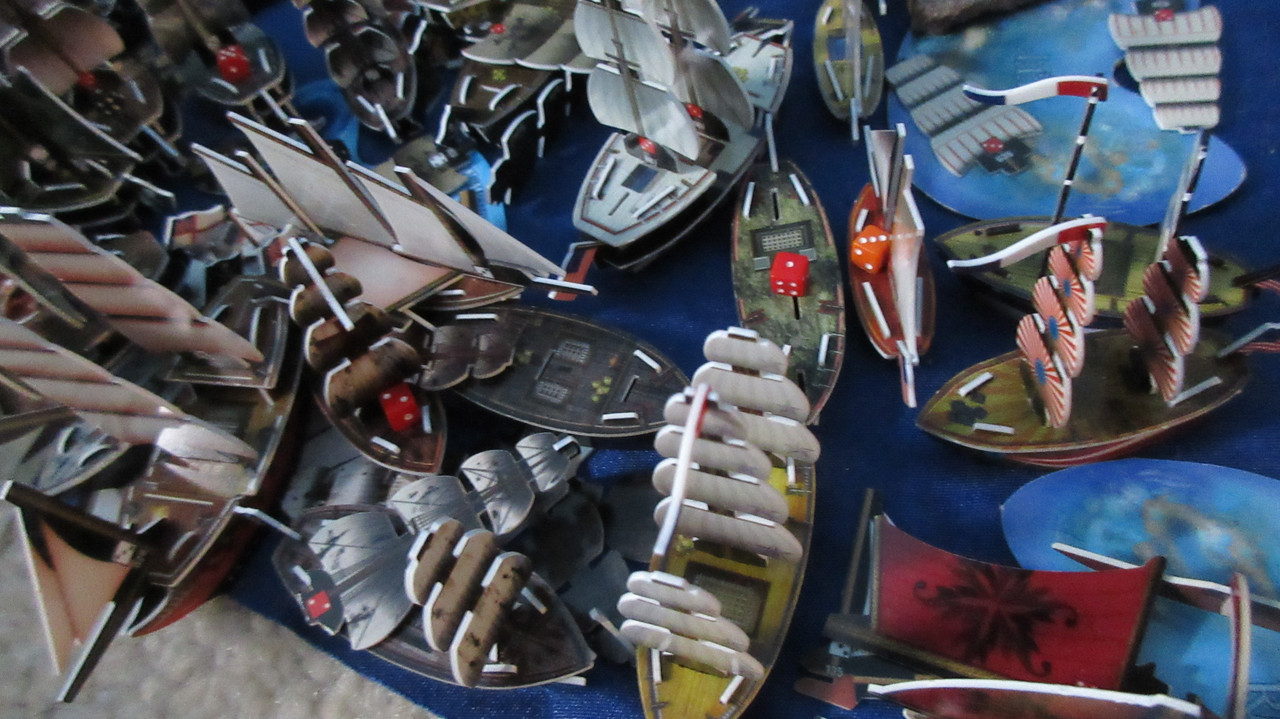 More captures as the Shark tows the Poison Dagger! The Swamp Fox missed a Broadsides Attack that would have sunk the Thrud, while the Fly hit 2/2 to take a mast off the Full Moon. 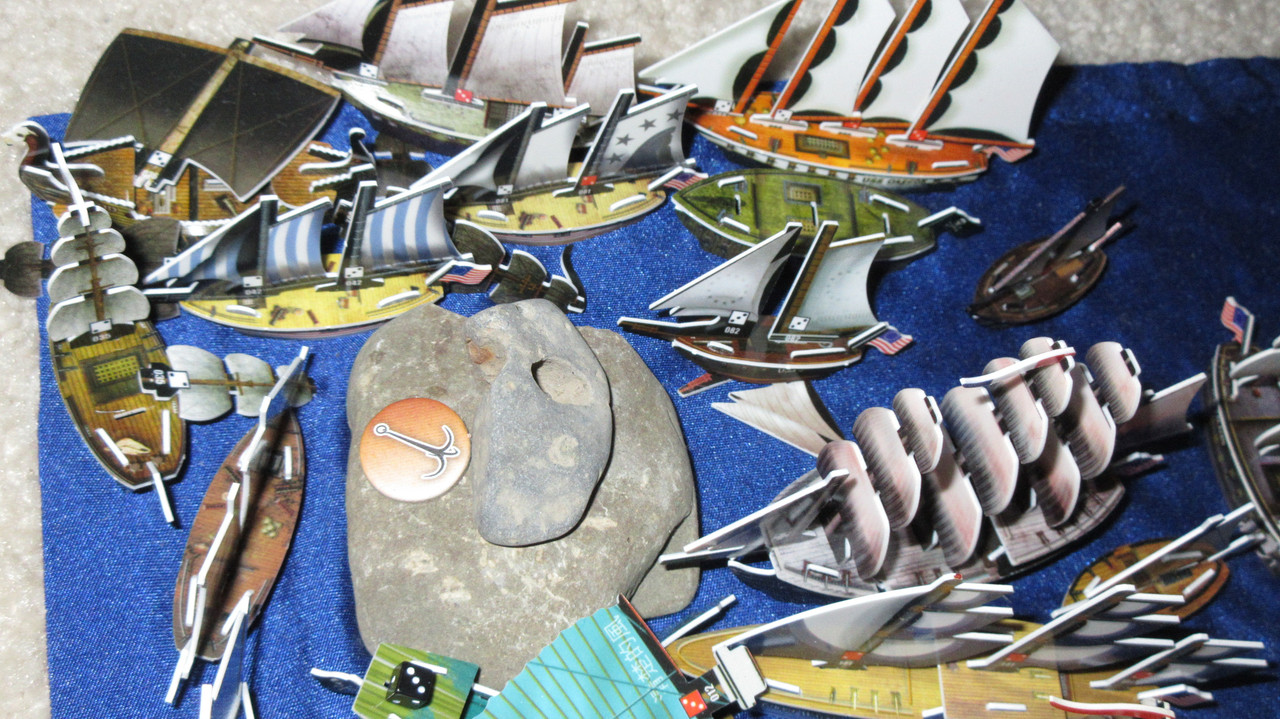 Commodore David Porter gives the BA order, and the Emerald hits! This severely damages the already-derelict Silverback. At the left, the Fuchuan has been hit 3 times as a derelict. The Pirates were already struggling in this battle, and now the Americans are really putting the hurt on them by capturing some derelicts and pulverizing the hulls of others. 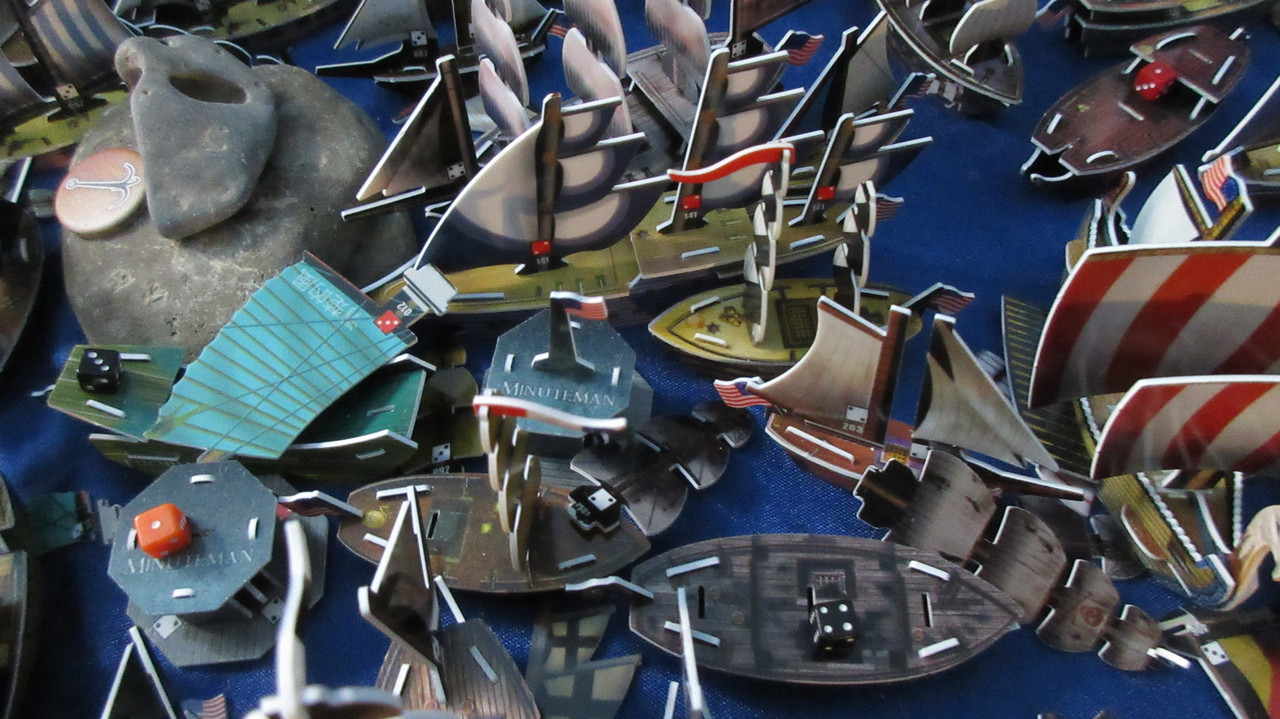 The Lenox and Montezuma come home for repairs, while 4 other ships carry out repairs. At the bottom of the frame, the Minerva and Gruesome were also captured! 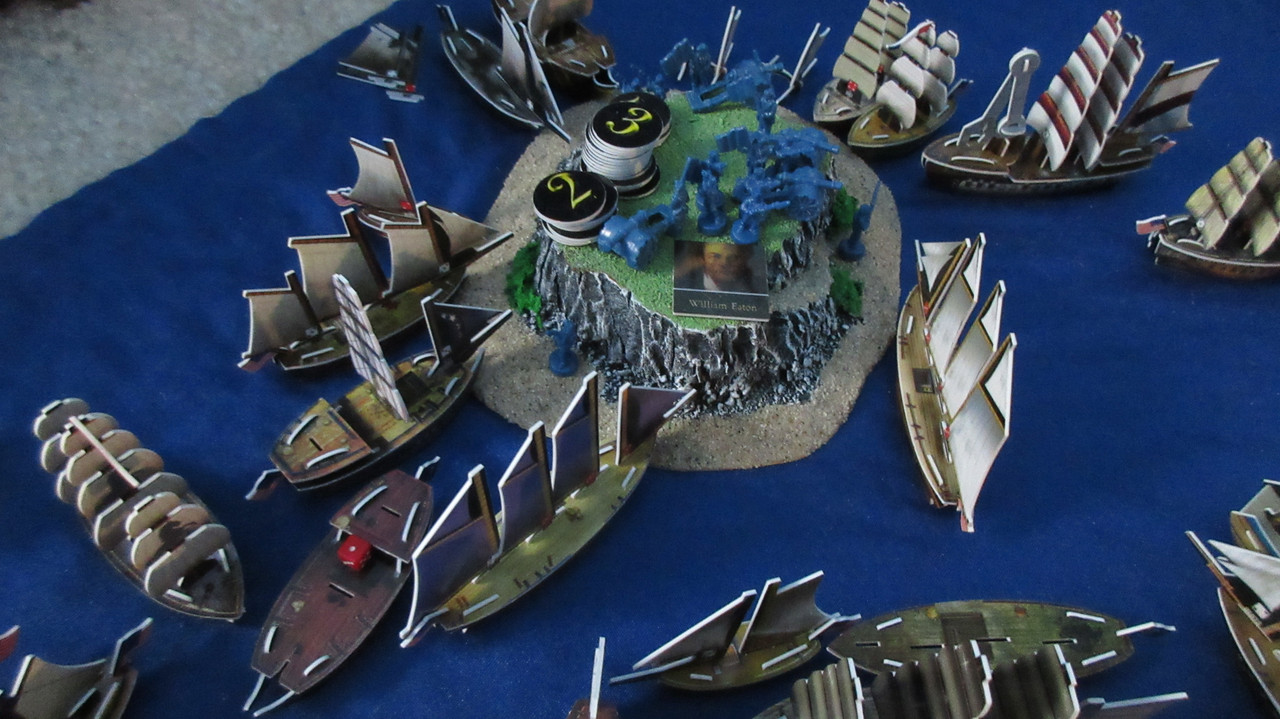 Check out the new-look middle of the fight! With the Gruesome and Minerva out, both sides will have more room to maneuver and shoot. The Americans immediately take advantage of this, with the Kettering cancelling the Calchas’ ability. The Calchas was sunk by a combination of 4 shots from different ships. In addition, the Ningpo was dismasted by the Minuteman flotilla. Furthering the successful turn, the Quigley and Blackwatch teamed up to dismast the Satisfaction! 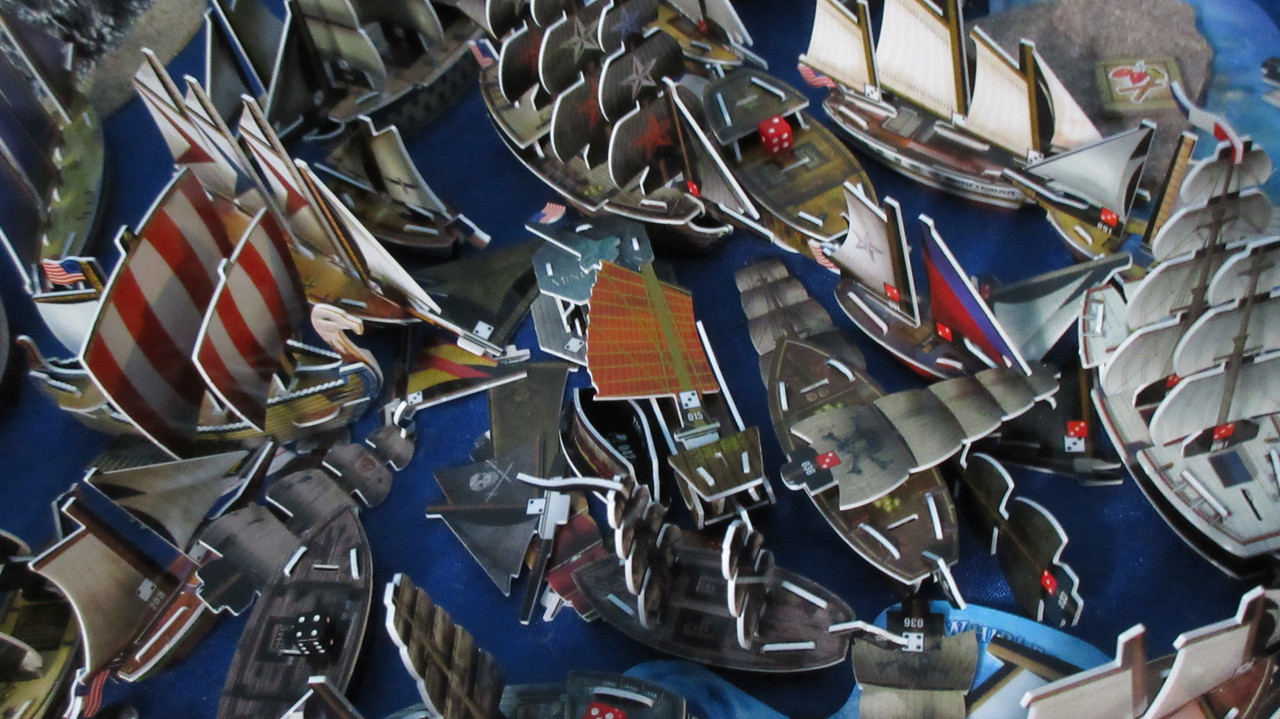 This time with the flash, showing the chaotic nature of a battle at sea: 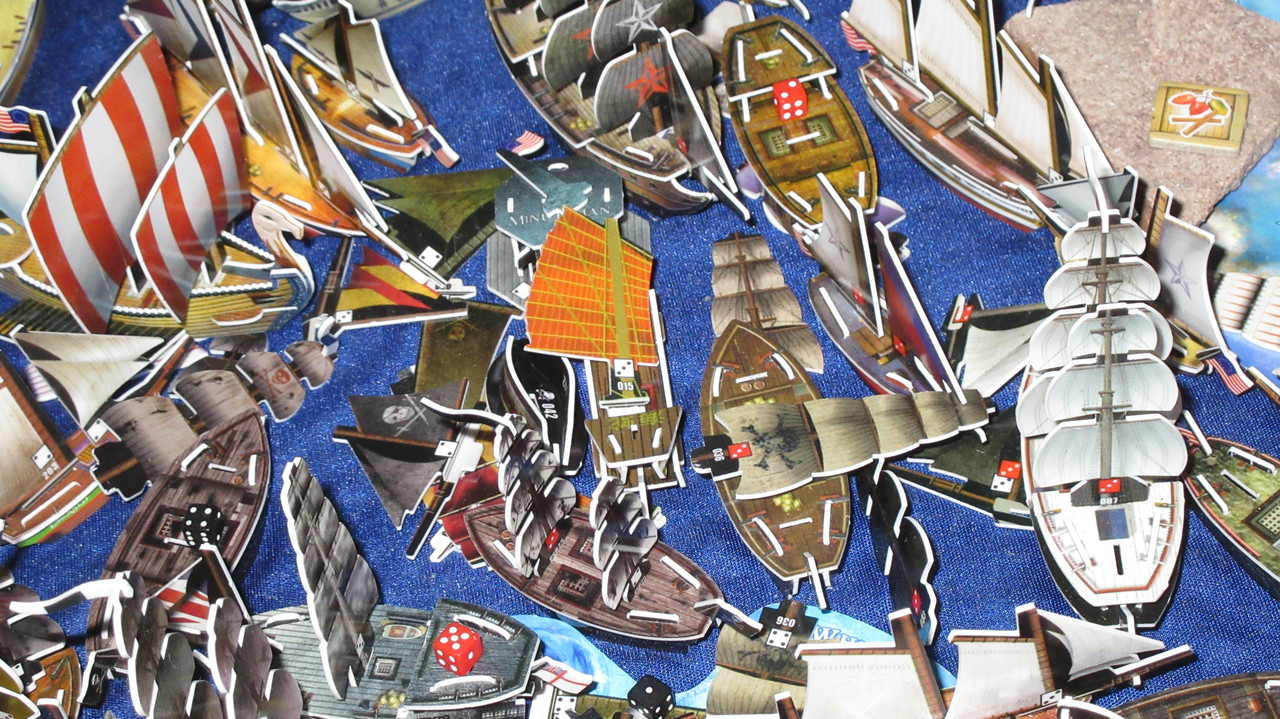 The Americans respond to Spanish aggression! The Gold Eagle used her reverse captain ability to score a hit on the Santa Ana before moving away to the Castle and extinguishing her flames. The York followed up with 2 hits of her own to damage the Spanish flagship. On a rampart of the Castle itself, an artillery unit is moved into position. At the left, the United States lumbers towards the battle area. 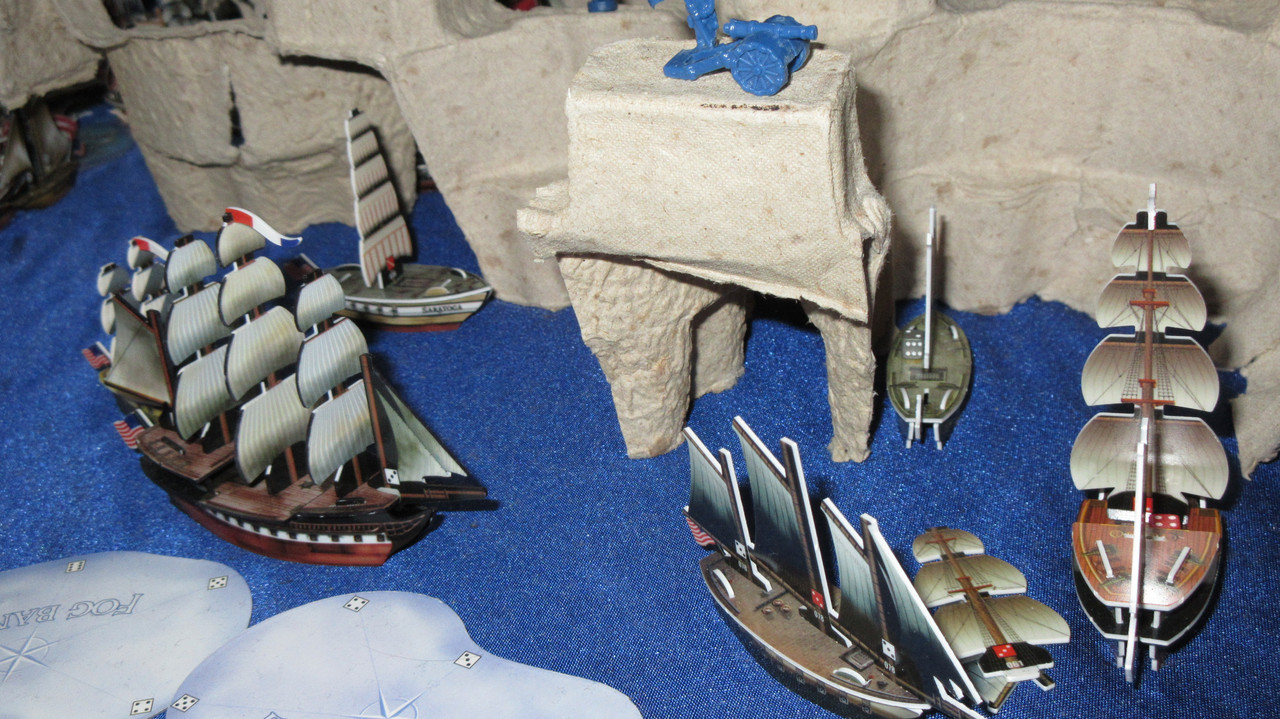 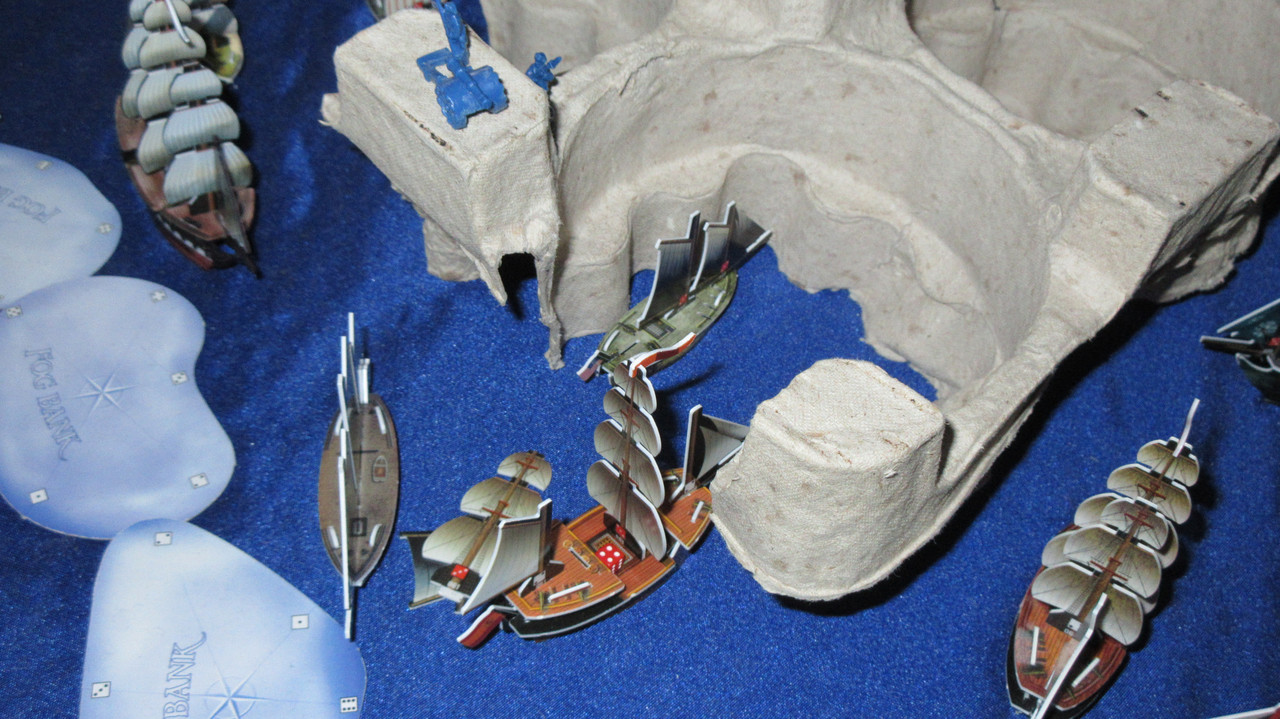 With this birds-eye view you can glimpse more army unit movements. The Americans are sending most of their infantry and artillery at the Castle towards the northeastern walls and ramparts to combat the Spanish! 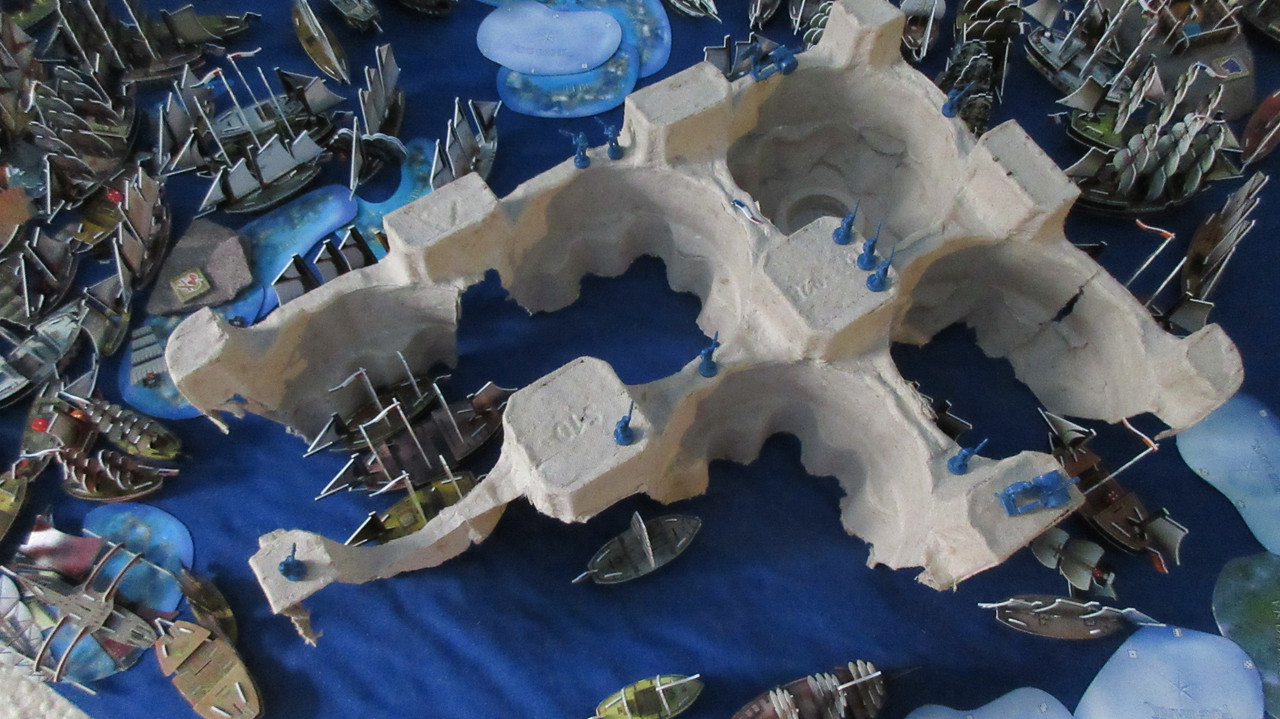 Nearly from the infantry perspective! I will continue to use some enhanced ranges from higher altitude positions with the Castle, though it’s not nearly as tall as Diamond Rock of course. The northeasternmost wall of the Castle is indeed cracked a bit. 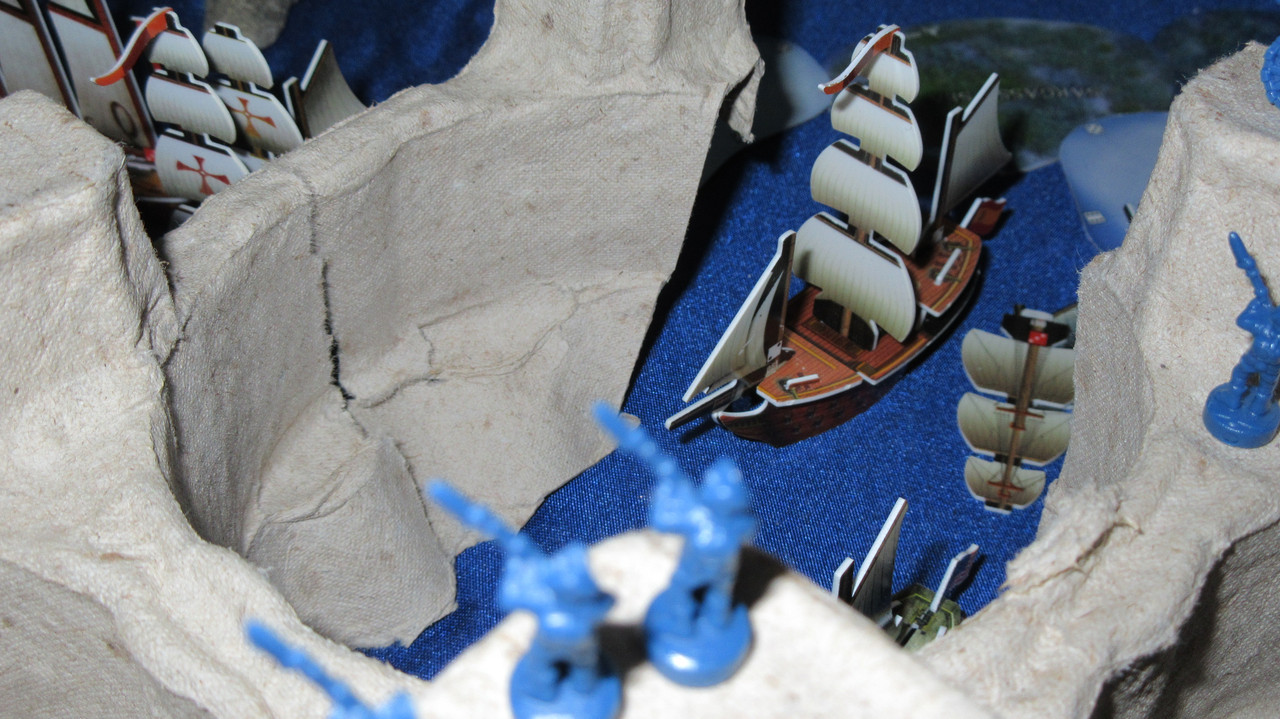 A meeting of the minds! The captain of the Pequod speaks with Amiral Stephan Dupuy of the Ville de Paris. Unlike some of the other conversations, I can tell you what they talked about. The American fleet lined up opposite the Spanish line would like to help their comrades in what could become a Battle for the Castle. However, to get around the northern side of the Castle, the French would have to move out of the way. The negotiations were tense and brief, and tensions between the Americans and French are rising a bit. A state of war does exist between the two factions, though they still have an indefinite period of truce after the Second Fight at The Flat. 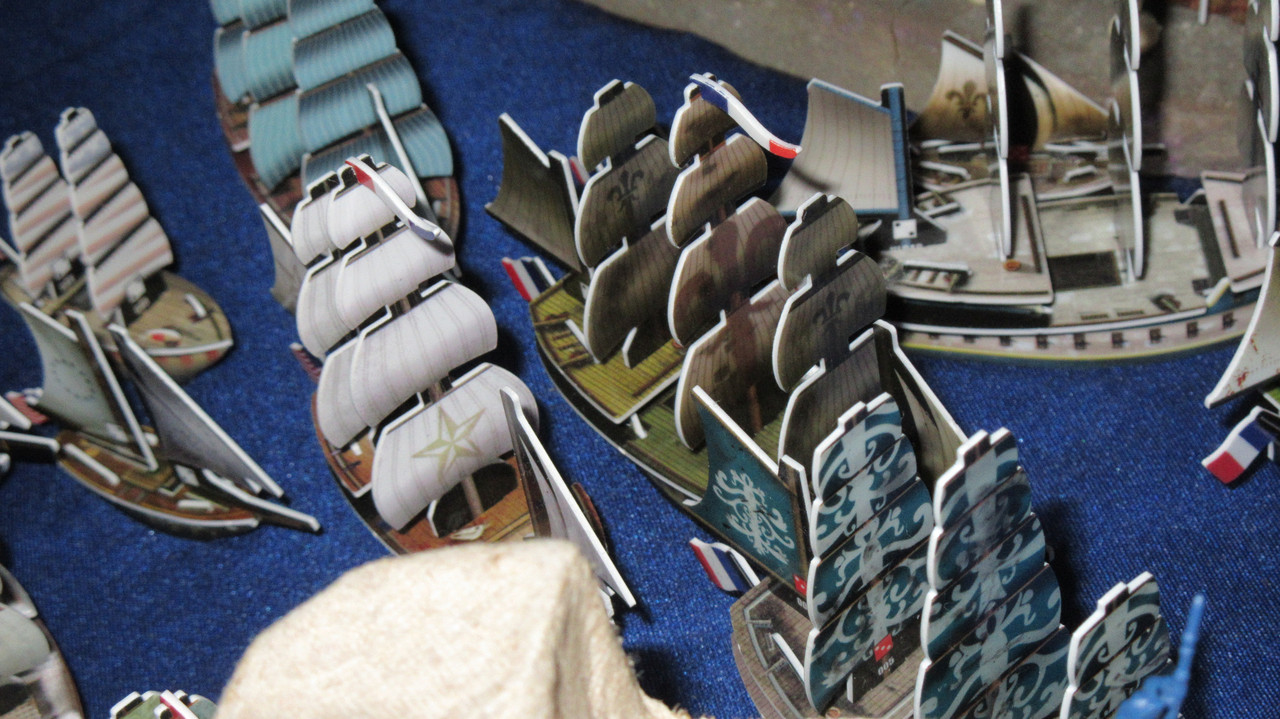 The French line defending The Flat (and now blocking American access to the east part of the Castle from the northwest) has been severely weakened by the departures heading east to combat the Cursed threat. 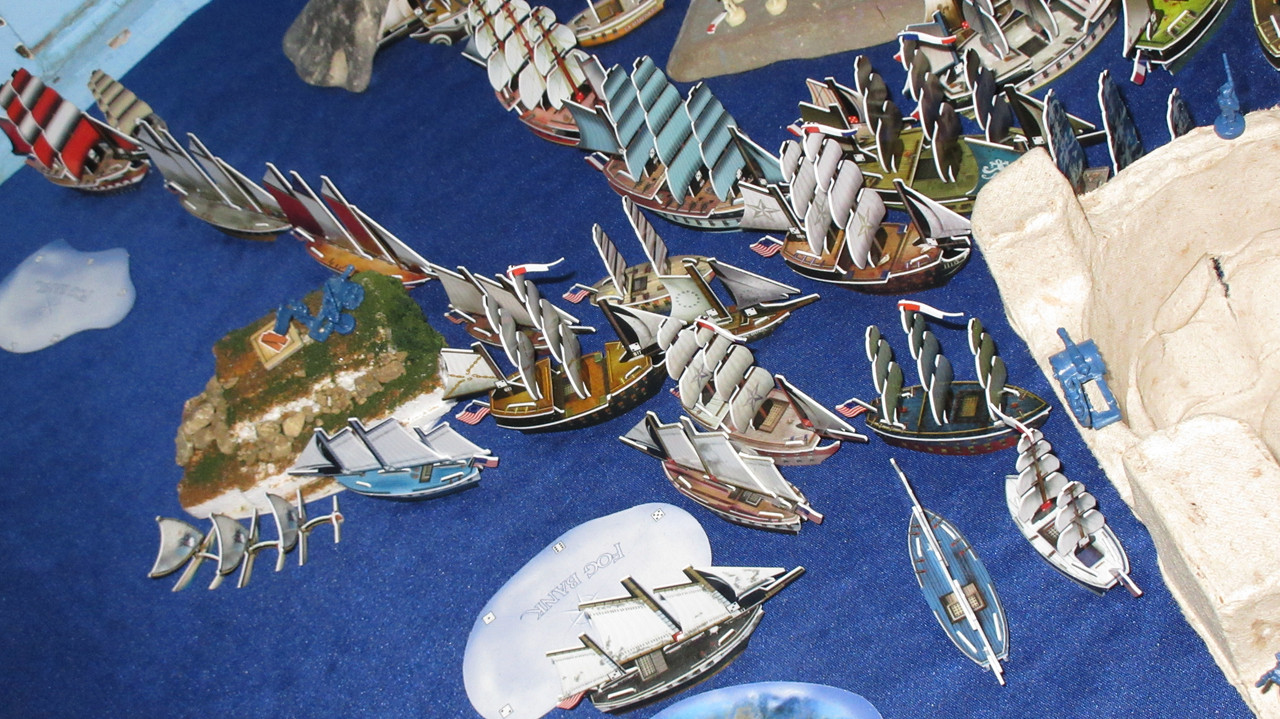 Most of the American fleet, with the situation in the southwest continuing to be quite one-sided thus far. The Americans captured a lot of Pirate ships this turn, which may force the Pirates’ hand to either retreat or send more ships to the battlefield now that some space has opened up at the whirlpool. 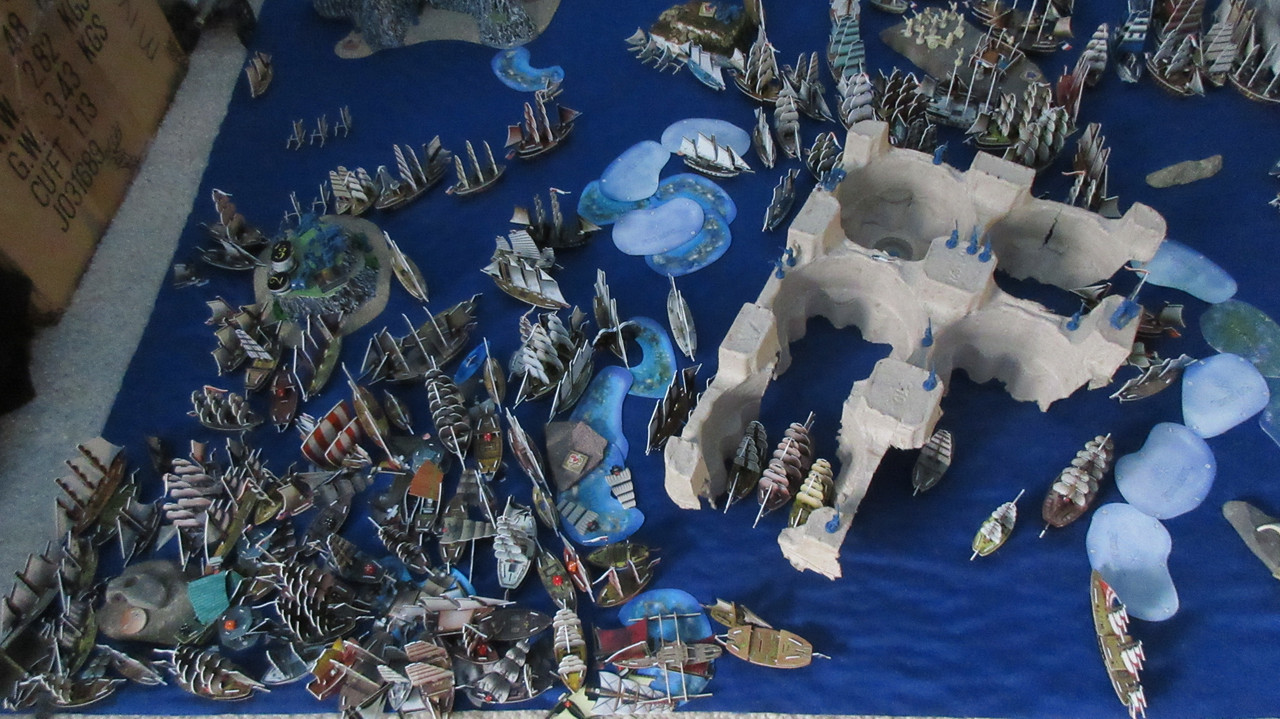 The Americans spend all 121 gold they have to launch 7 new gunships! You can kind of tell they’re running out of ships, as they dip into one masted sloops for gunship support. However, the ships are very well-crewed and all of them carry firepot specialists! You can probably guess where the Americans launched them from… 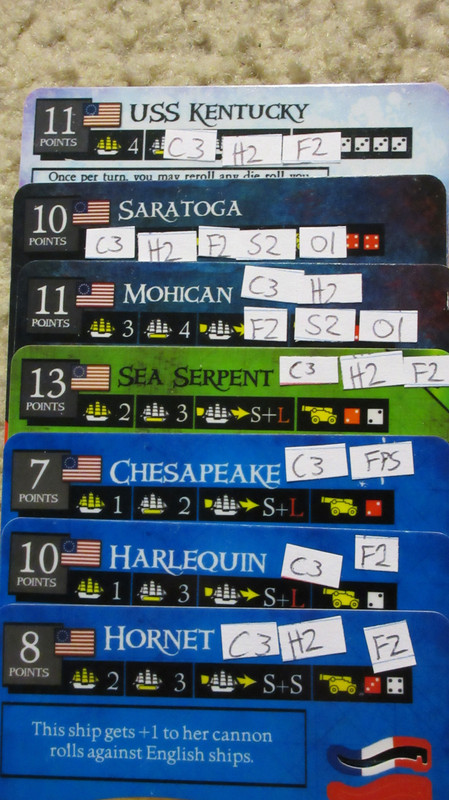 The first launch at the Castle! All 7 new ships come into play at the Castle, which had a “fort upgrade” dropped off at it so ships and crew could be launched there. This will inject some life into the American resistance to stop the Spanish from retaking the Castle that once belonged to them. It’s worth noting that there is a limited amount of space at the inner harbor area of the Castle walls, so no more than 10 ships could be launched from the Castle in a turn if it was empty. Here the Gold Eagle, Bartlett, and Atlanta were already in the way in 3 of the areas, but the Americans also ran out of gold anyway. Still, the massive size and powerful position the Castle holds could be an interesting dynamic going forward, especially since nearly all the factions are connected in some way by now…. (Americans vs. Spanish, Americans vs. French, French allied with Pirates, French vs. Cursed, Pirates vs. English, etc etc.) 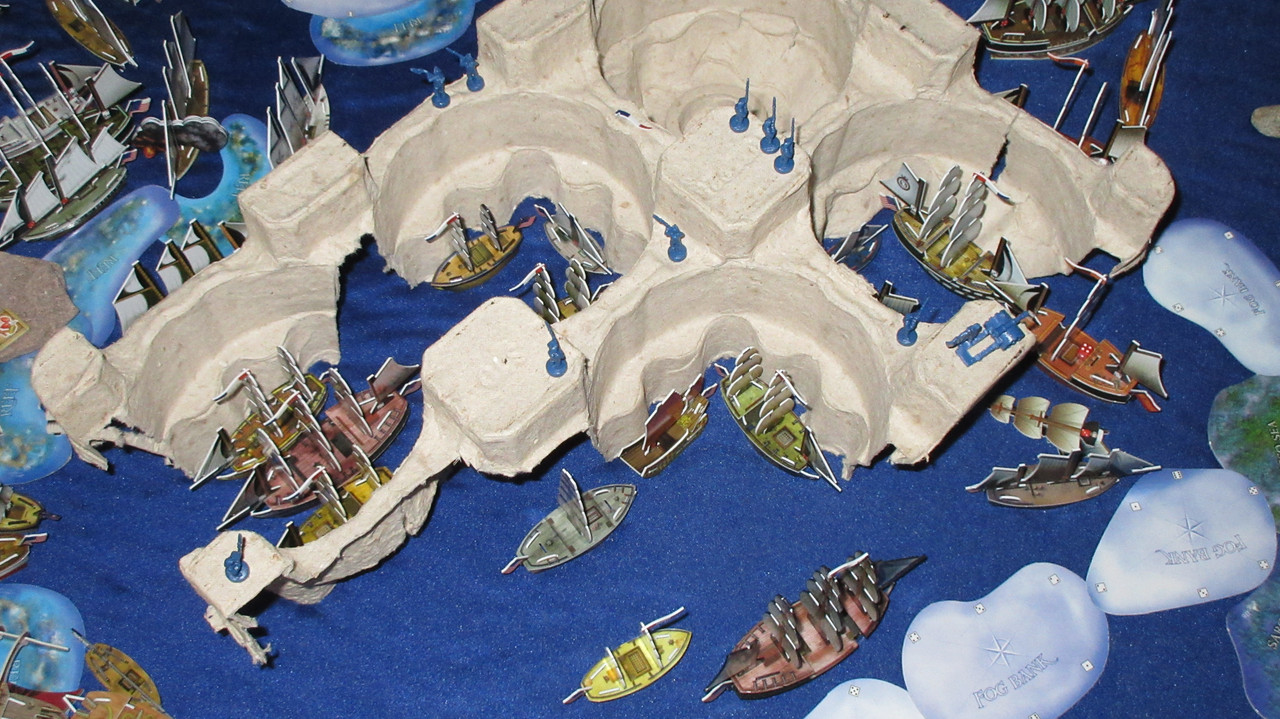 I will say that the upgraded “forts” (including the Castle) cannot have army units hired there. That rule was not in play earlier when the Pirates brought some units into play at Dead Man’s Point, but I intend to use it for the rest of the game. I want the army units to come from the home base since it makes more sense. Besides, the Americans found the Castle abandoned, so it’s not like random soldiers just started coming out of the woodworks when they got there even with money paid out. XD

This is just a look at how detailed, complex, and intense a single faction turn can be! Imagine a whole round of all eight factions! Now you see why it takes so long!