Unfortunately I wasn’t able to play as much as I wanted today and yesterday.

I also forgot to mention last time:
-The Cursed do not have to roll for effect when using whirlpools. (thematically this is due to their somewhat supernatural nature, in addition to the recent influence of Davy Jones, and by extension, Calypso herself)

The English do some damage in Karkuda: 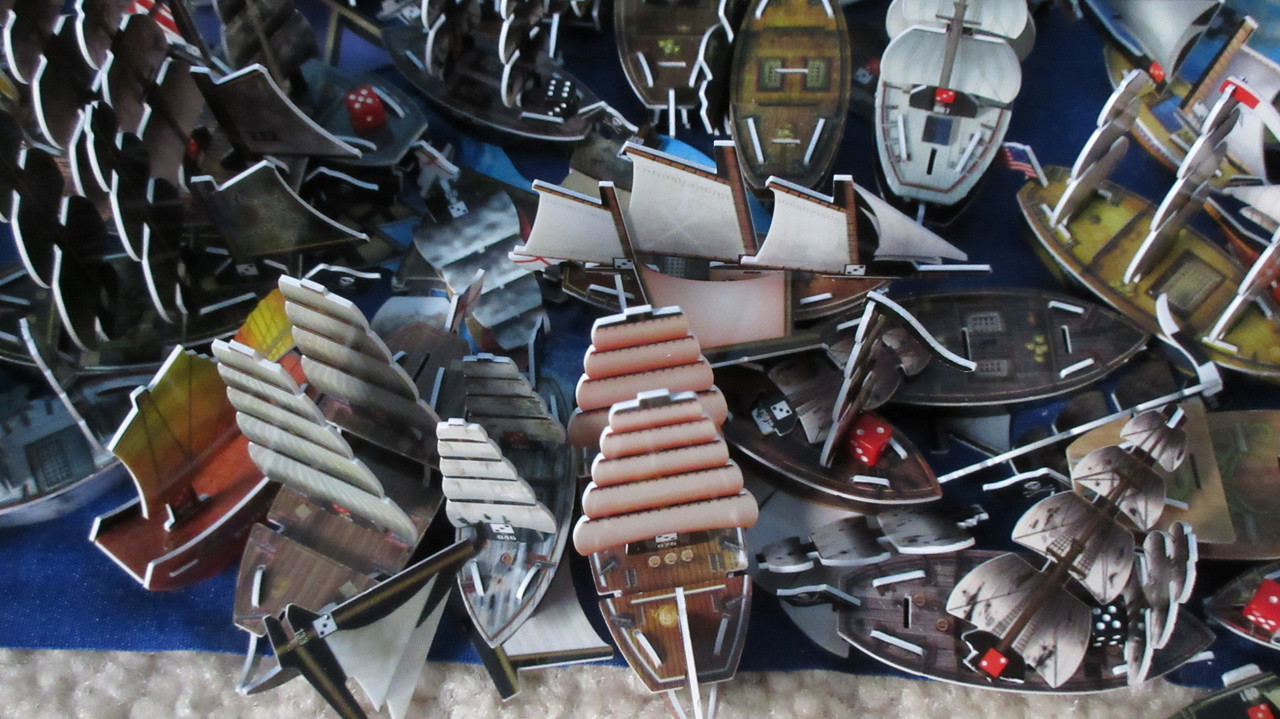 Spending all of their 26 gold, the English launch yet another anti-Pirate ship! HMS Victoria is one of England’s finest warships and carries Myngs’ Marauders, which will help the ship shoot through others with those great L-range guns. That ability is especially helpful in giant campaign games with densely packed battle areas. 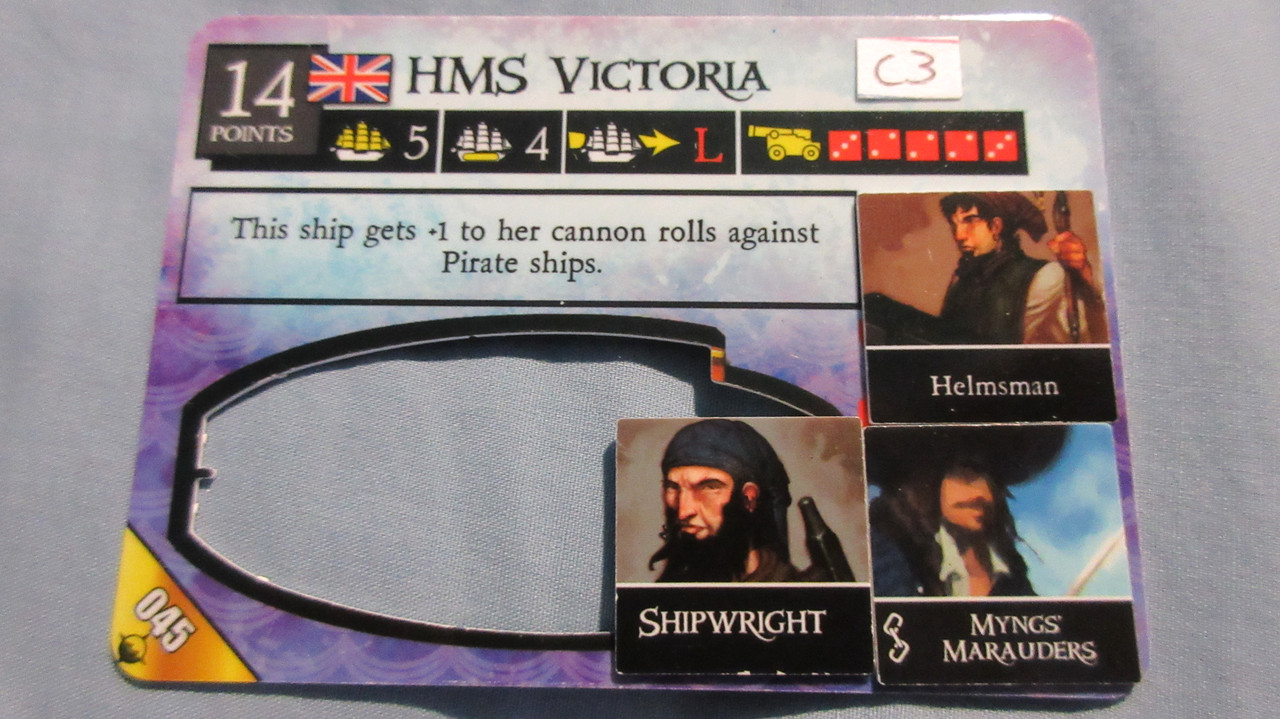 In the Caribbean, English warships make their way towards the whirlpool: 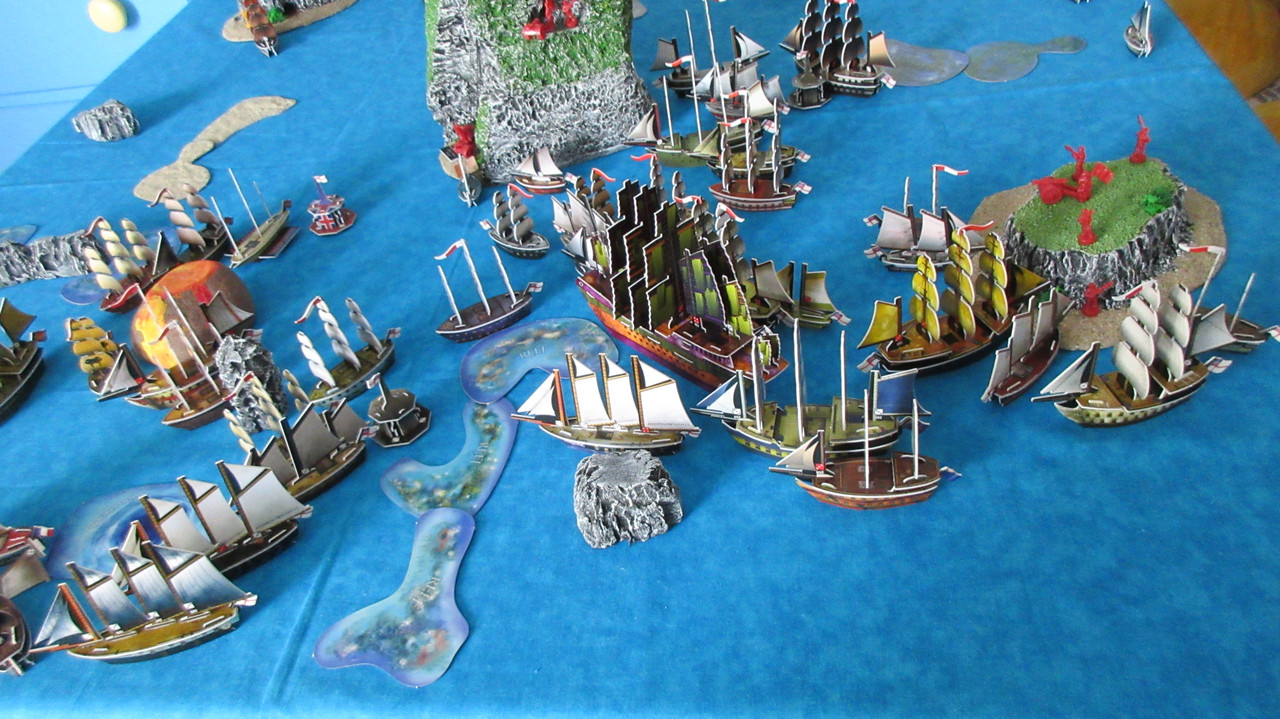 The Spanish attack!!! The Santa Ana slips around the northeast corner of the Castle and sets the Gold Eagle on fire! 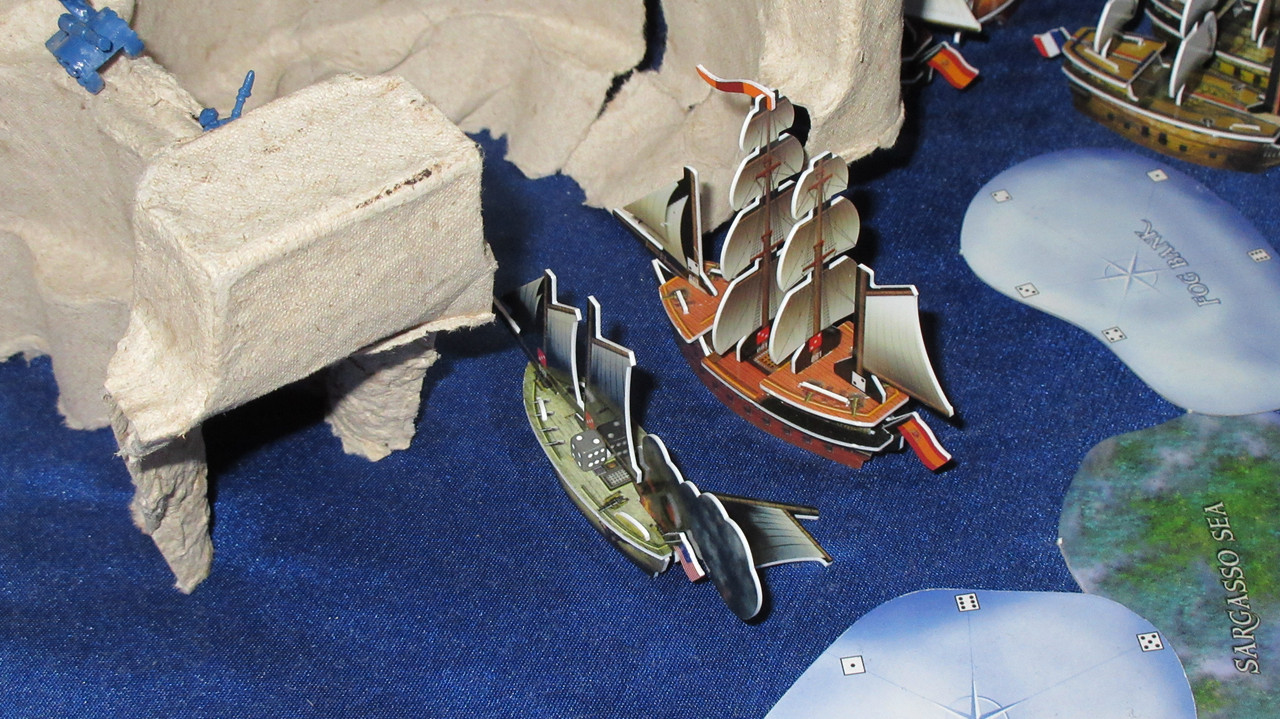 The Santo Columba shoots at American infantry on the Castle! One of the units is taken out, and the Spanish use S-boarding to eliminate another!! 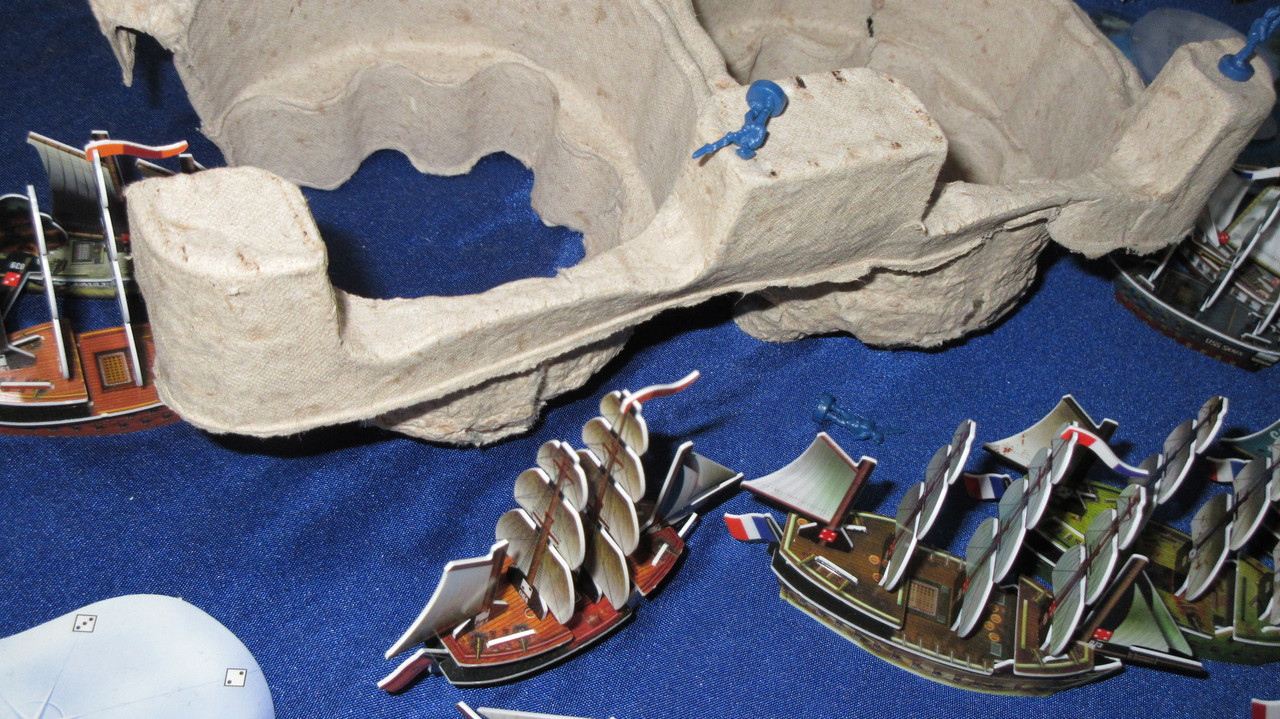 THE SPANISH CLAIM THAT IT’S THEIR CASTLE!!!! That is the reason for all this!! After the French discovered the Castle, they had a hunch that it was a Spanish Castle abandoned in Karkuda, and they sent Guy LaPlante to the Caribbean (after finding out the Spanish were there from the English) to tell them about it. The Spanish were extremely angry when they found out that a faction had begun any kind of operations at the Castle. Now that they have arrived on the scene, they are going ballistic. The Castle is indeed an old abandoned Spanish castle from long ago. However, the Spanish see it as rightfully theirs forever. They want to take it from the Americans at all costs!! Here you can see three more gunships arriving in the area, with the Acorazado and Serpiente the latest ships coming through the whirlpool. 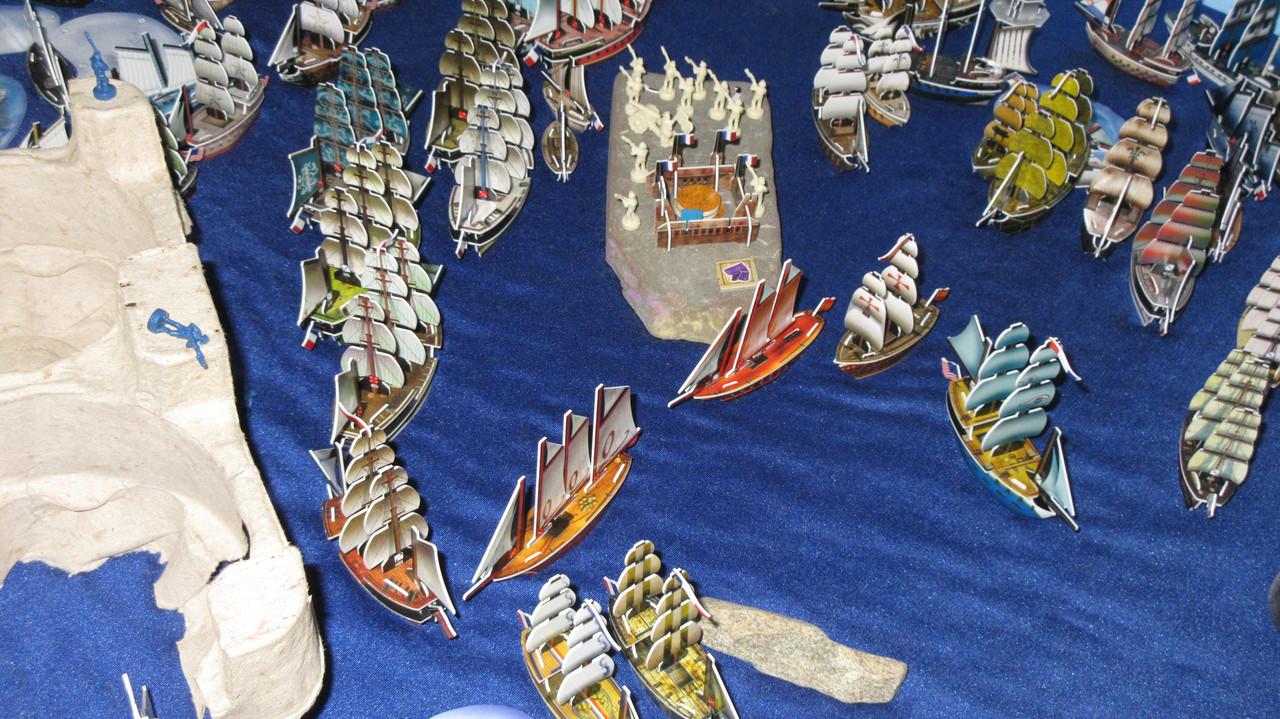 The Spanish spend all of their 20 gold to launch La Resolucion with a captain, helmsman, and firepot specialist. 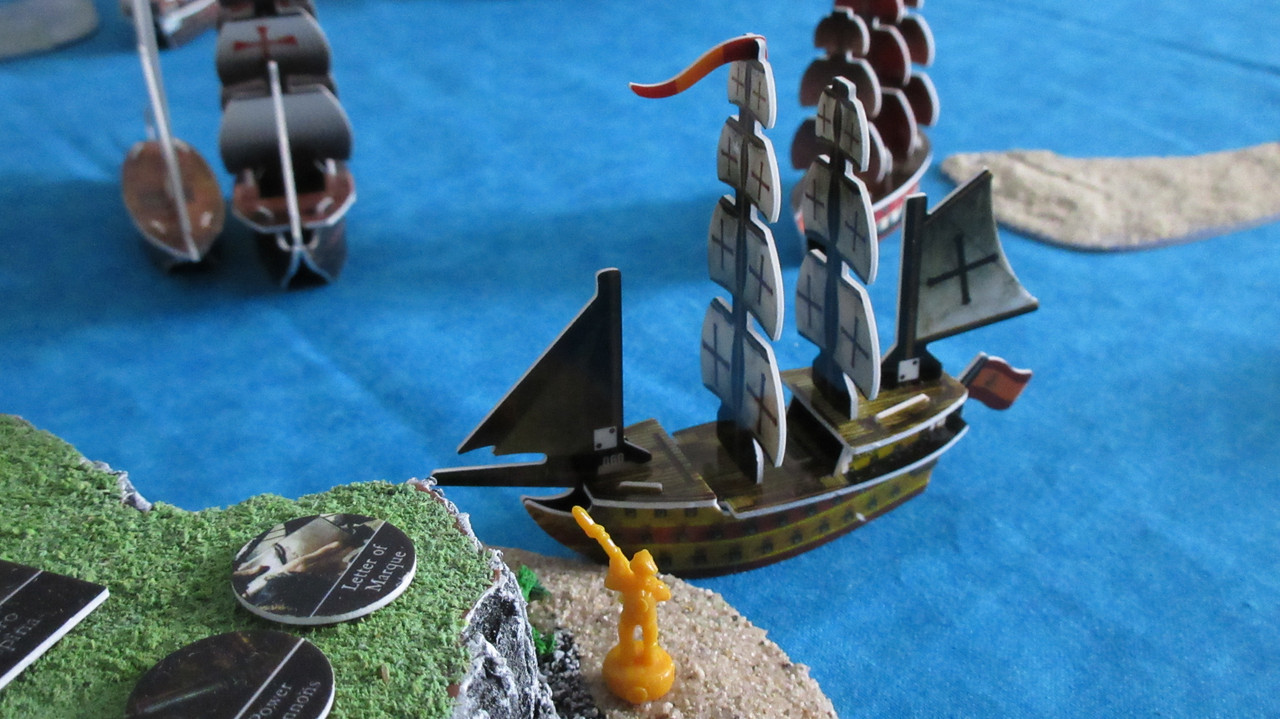 The French have recently dropped off some infantry units on their islands in the far east: 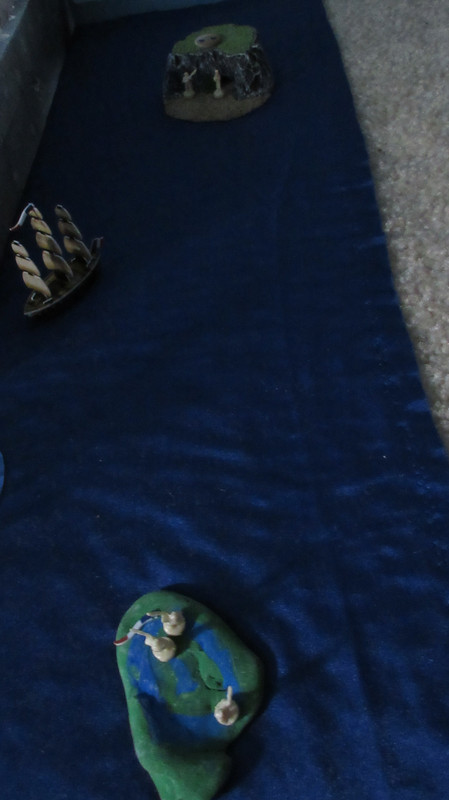 But you don’t care about that, do you?! It’s time for BATTLE!! The Geographe starts the French combat phase of their turn with a paltry 1/5 (with reroll) against Terrox: 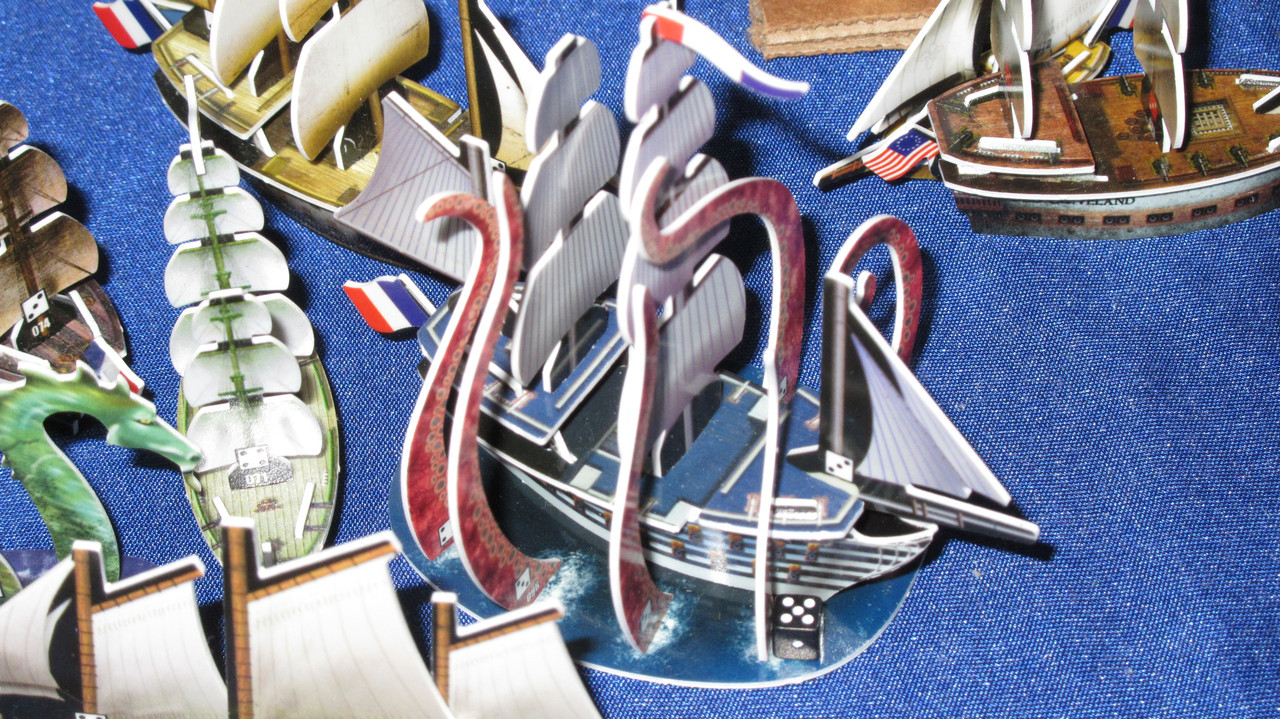 Other French ships fare better! The Cyclops, Madness, and Demon Gate lose a mast each to the Glaive, Carcajou, and Sabre! 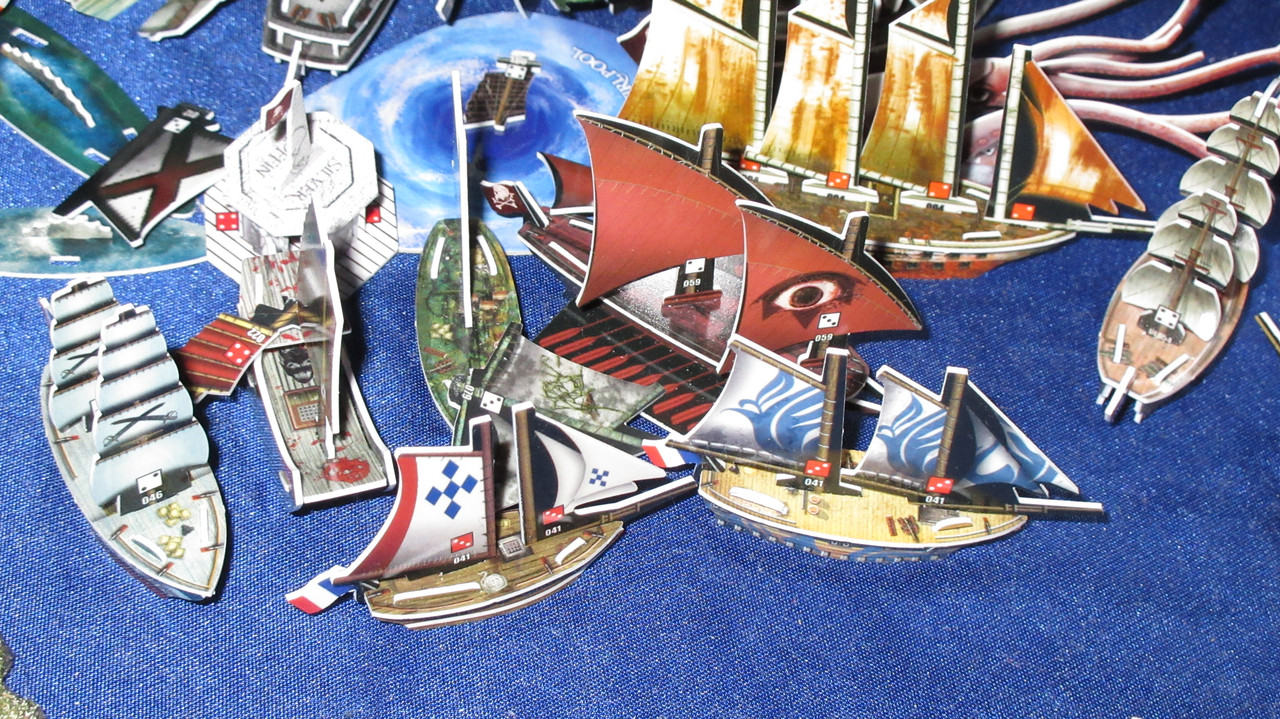 French ships tag team the Bloody Blade! The Corse is given Deleflote’s action to dismast the ship! Shots from the Musarde and Corse also take 2 masts off the Divine Dragon. However, that is about all the French could muster on their turn, as most of their gunships are near the sub hideout or The Flat. 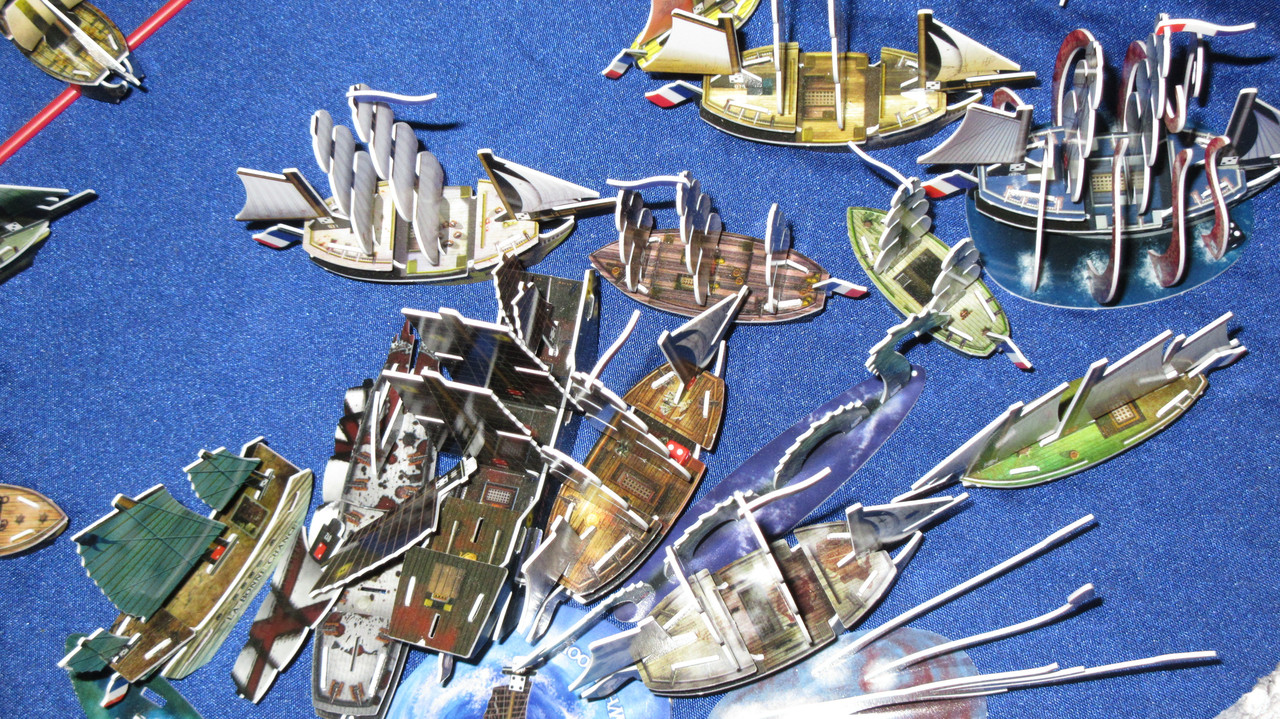 But they’re on the way! Here you can see about 6 French gunships headed north as they hear the emergency shots fired near the Harbor. Gaston is willing to cut the blockading squadron at the hideout in half, but stays on blockade duty since he knows the value of his admiral ability. 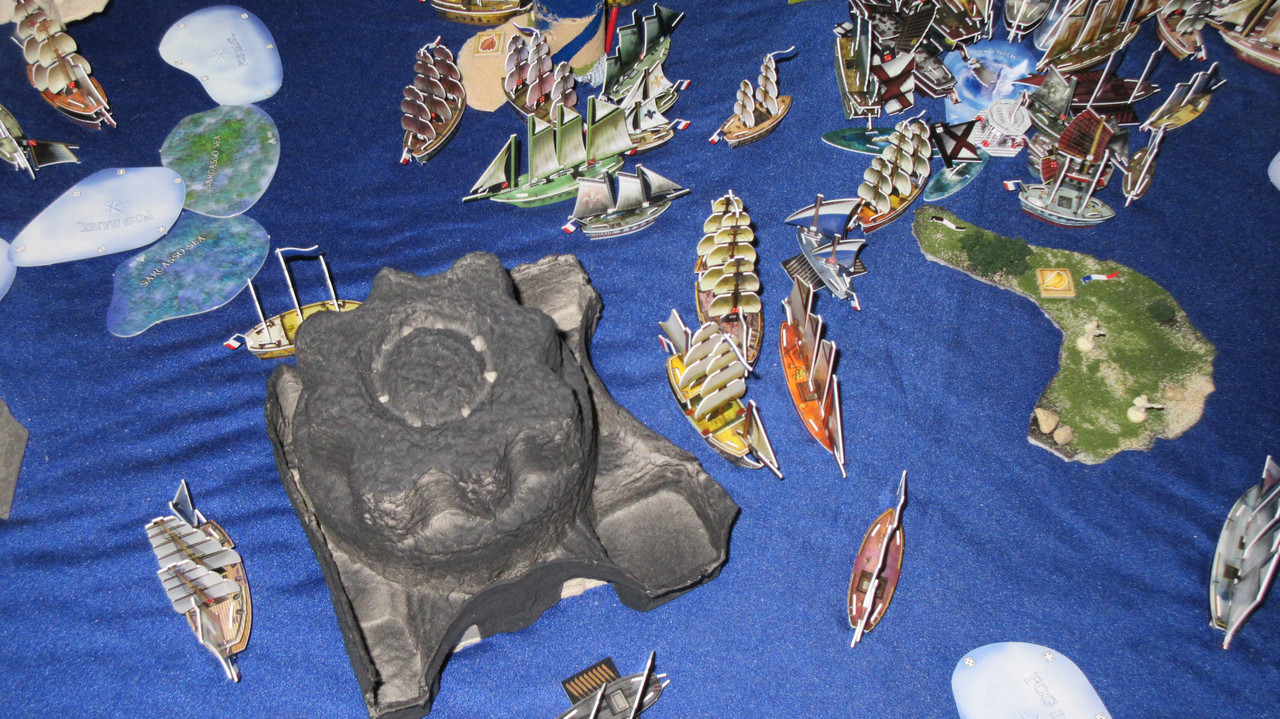 Even in this time of emergency, French cargo ships get resources home since it’s the best thing they can do. The French do have some solid army units on the outermost docks, but they’re not in range here. The French will likely try to employ a stalling strategy similar to the Americans in the southwest, setting up block ships while waiting for powerful help to arrive. 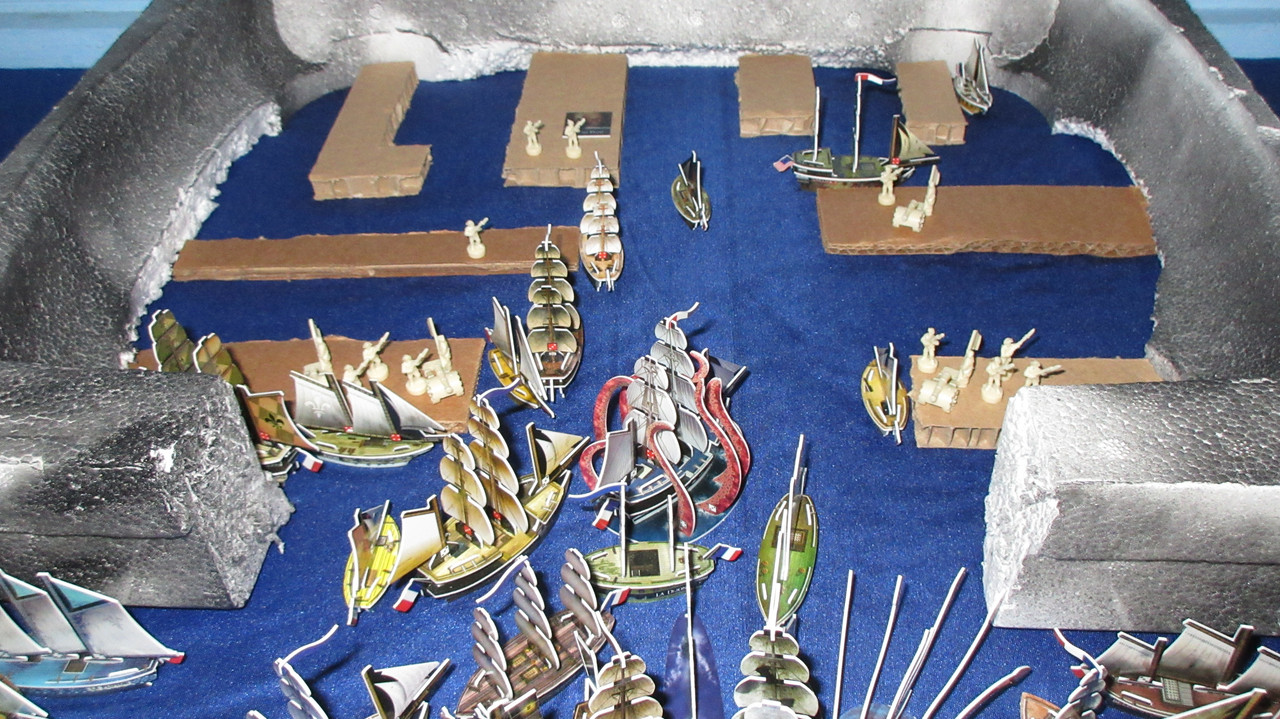 Given how few cannons they had available in the area, the French fought well after the surprise Cursed invasion shocked them. The Corse was especially key, as her 8 shots with Deleflote did most of the damage against the Bloody Blade and Divine Dragon. 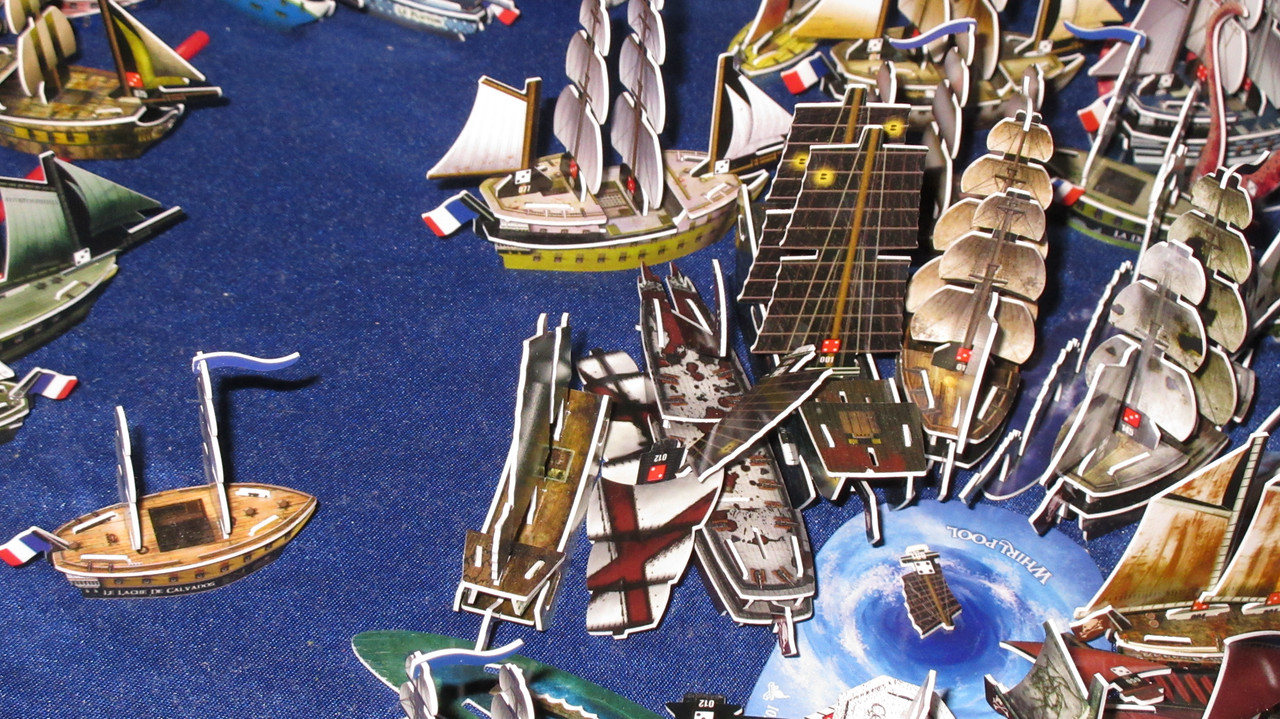 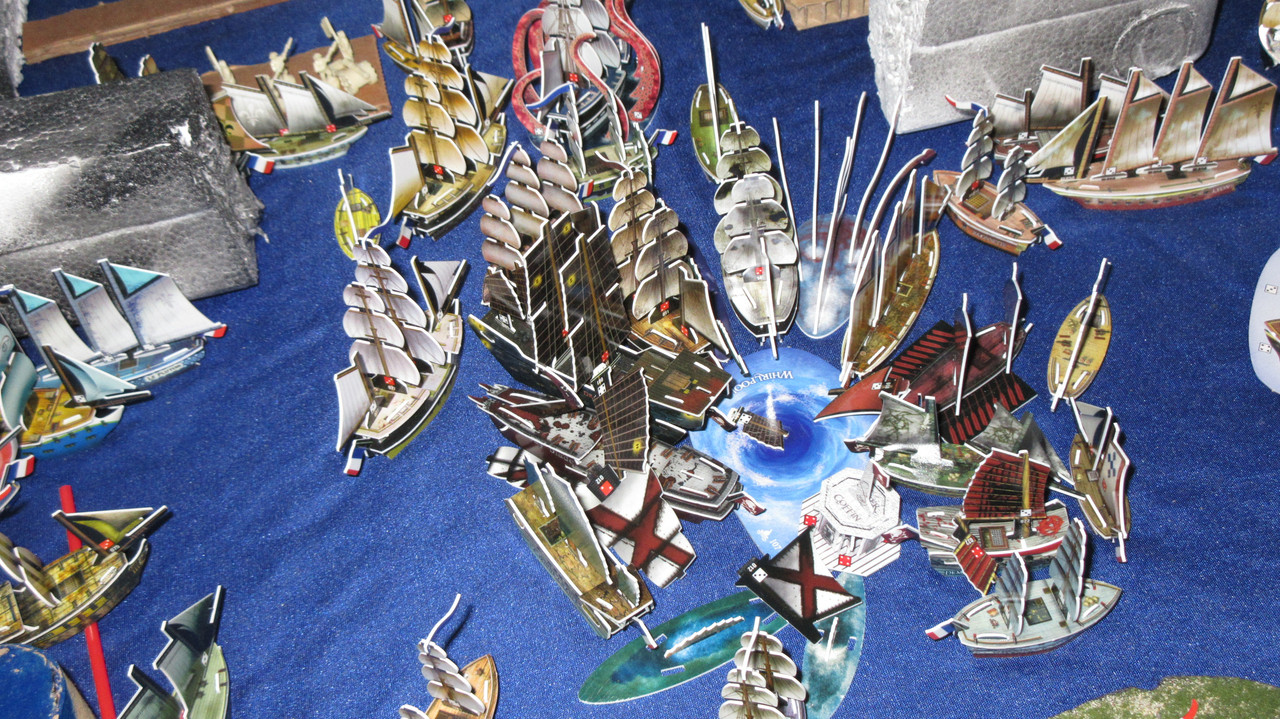 The French are finally forced to mobilize!! Many of their gunships at The Flat turn around and head for the Harbor! 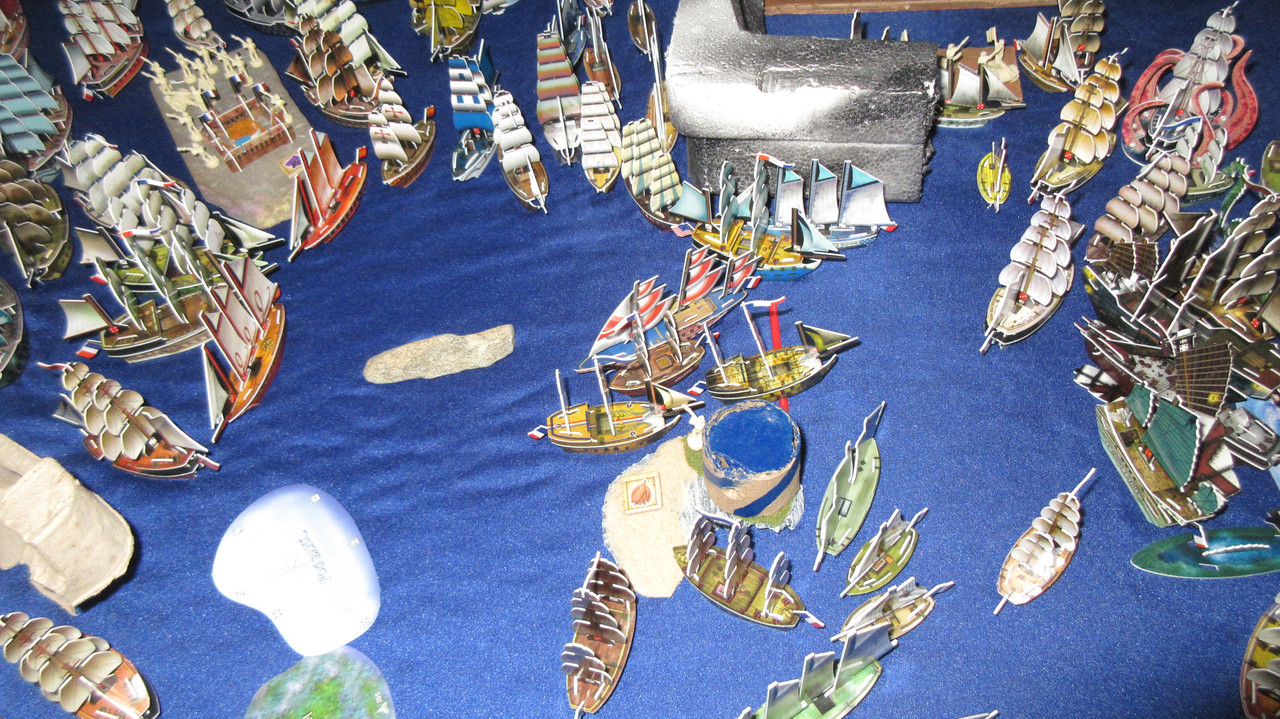 Lenoir has half of his epic line of 5 masted capital ships turn east. Five 5 masters will head towards the Harbor, with five staying on duty at The Flat. In addition, at the right you’ll notice that the entire 10-gunship “backup” squadron has also turned around. The French must combat the Cursed threat! 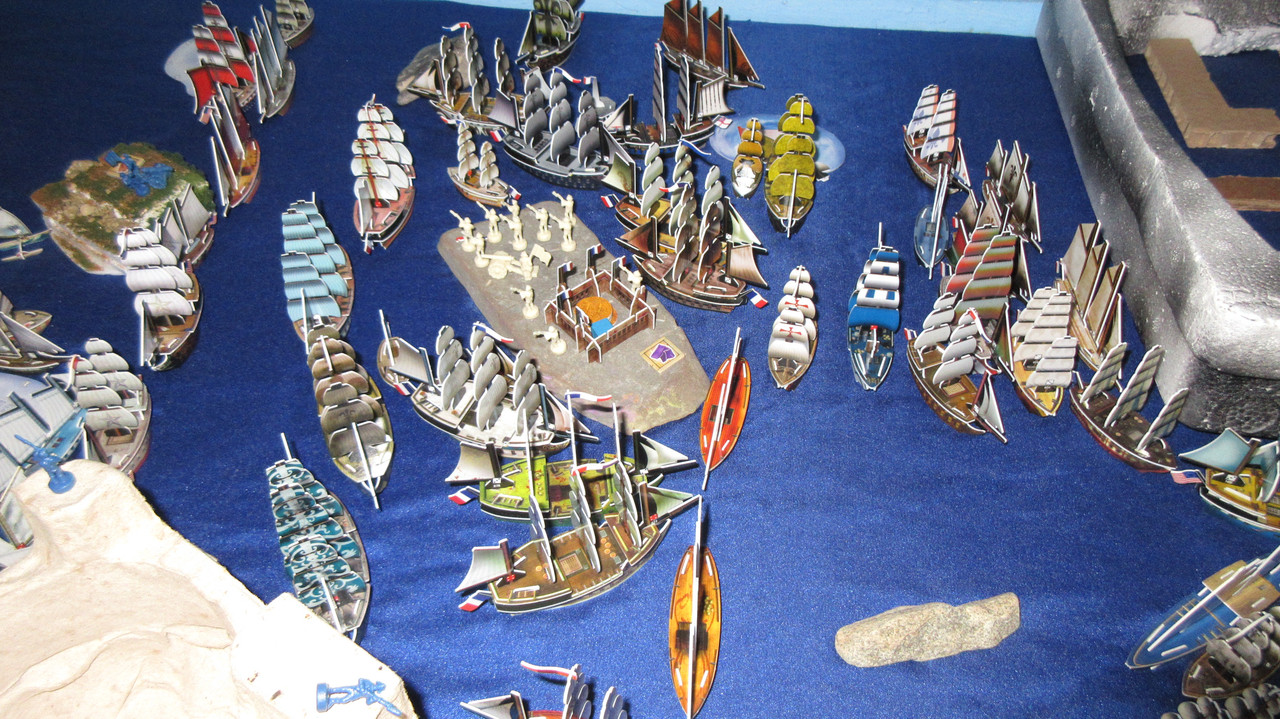 With five 5 masters, the Hercule, and a few support ships, the French defensive line is still strong. However, they must now divert their forces to save their home. It will be interesting to see if Spanish ships get in the way of the French (they already have a bit just south of The Flat), and if that worsens the somewhat strong relationship between those two factions. 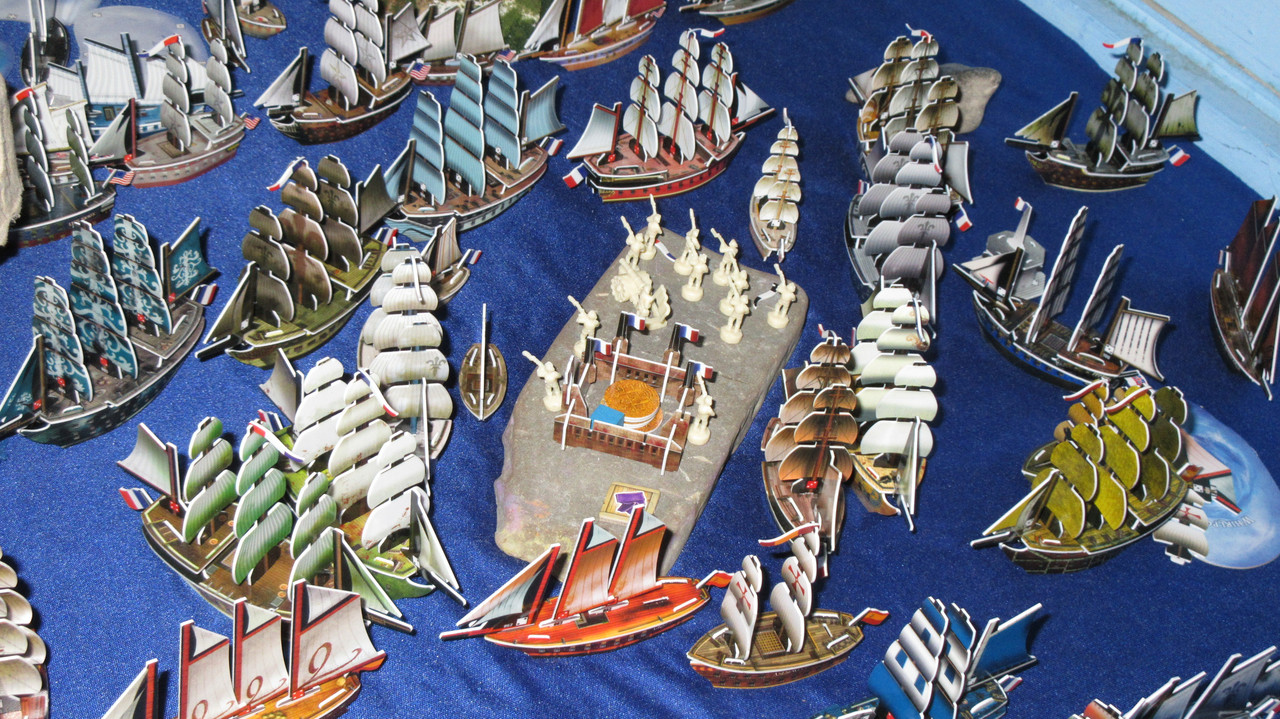 Lenoir speaks with the captain of HMS Forge, and the French hastily agree to an alliance with the English! I will say that this was a spur of the moment thing, and it’s not exactly a strong bond right now. However, we’ll see how it develops over time. 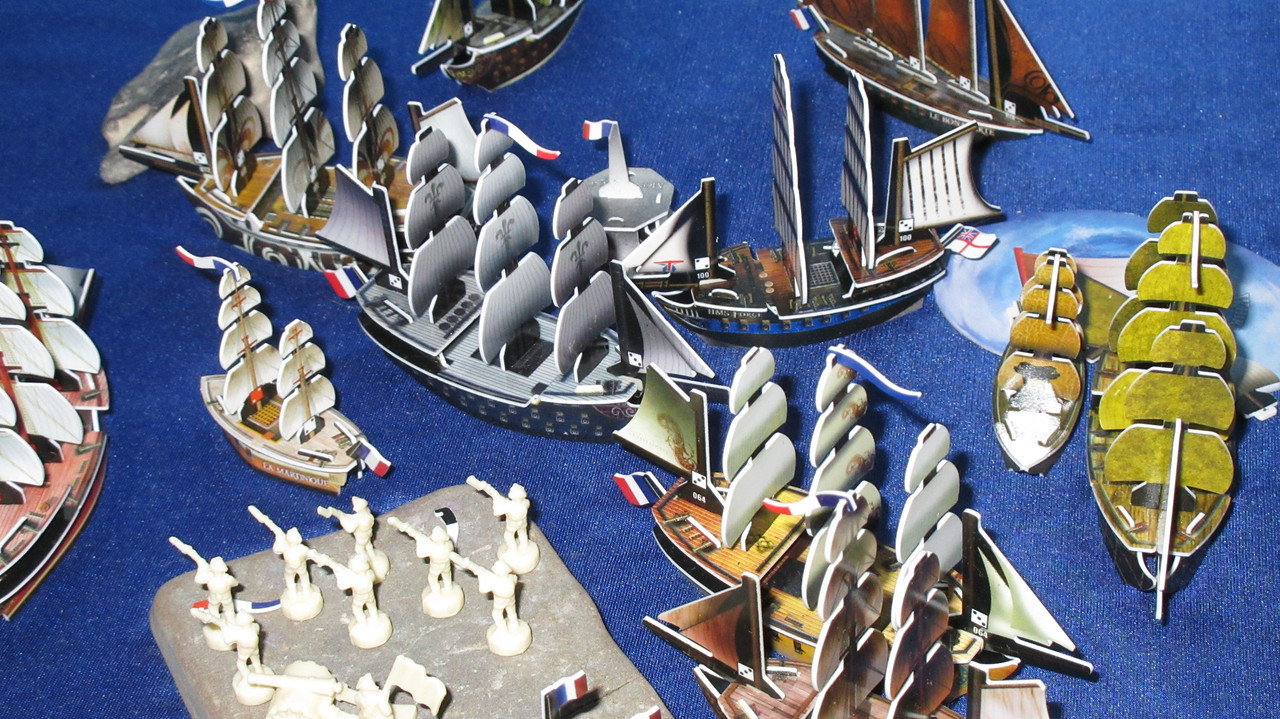 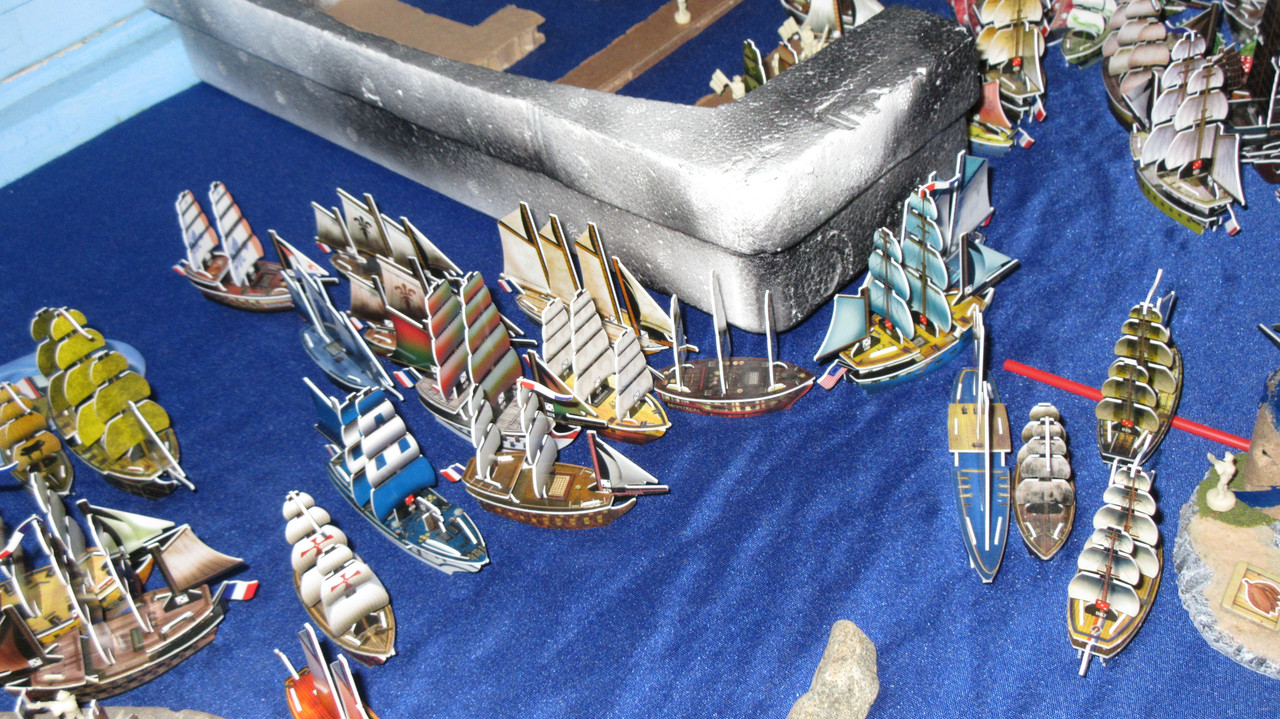 Making their way towards the battle area are various French gunships. One thing’s for sure: if the Cursed don’t retreat soon, the Harbor entrance is about to get VERY crowded! 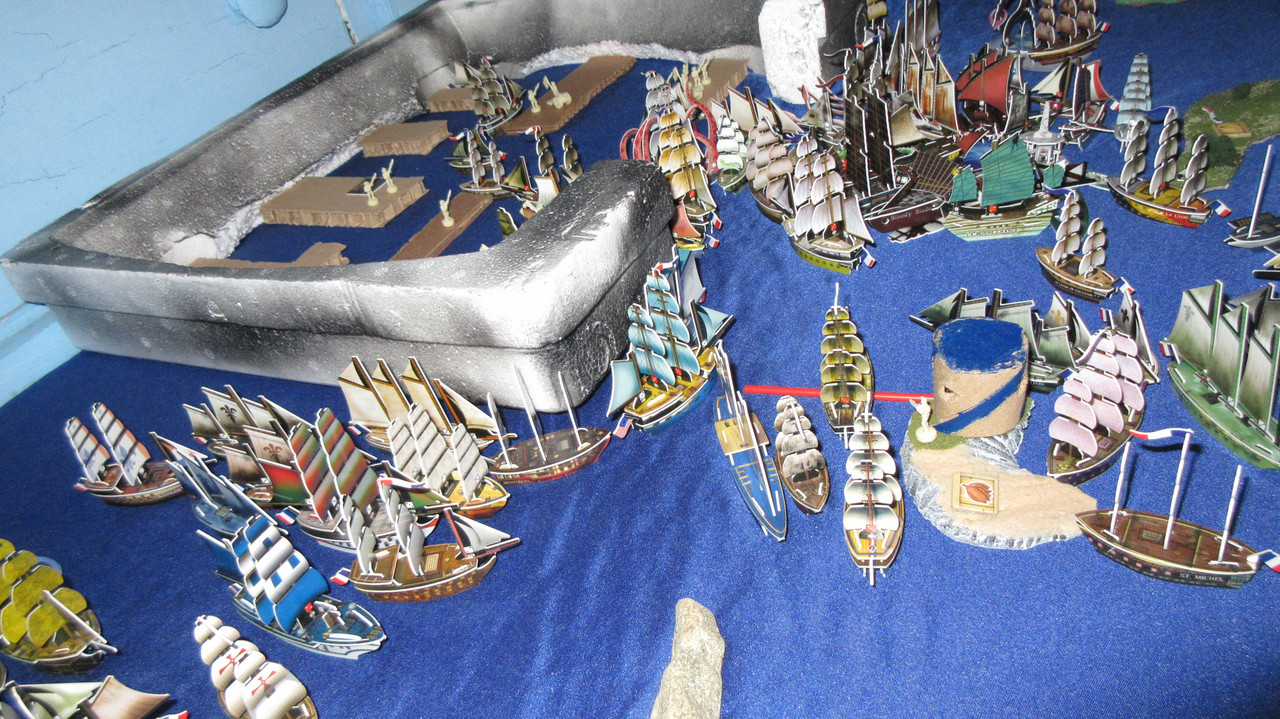 The entirety of French operations: 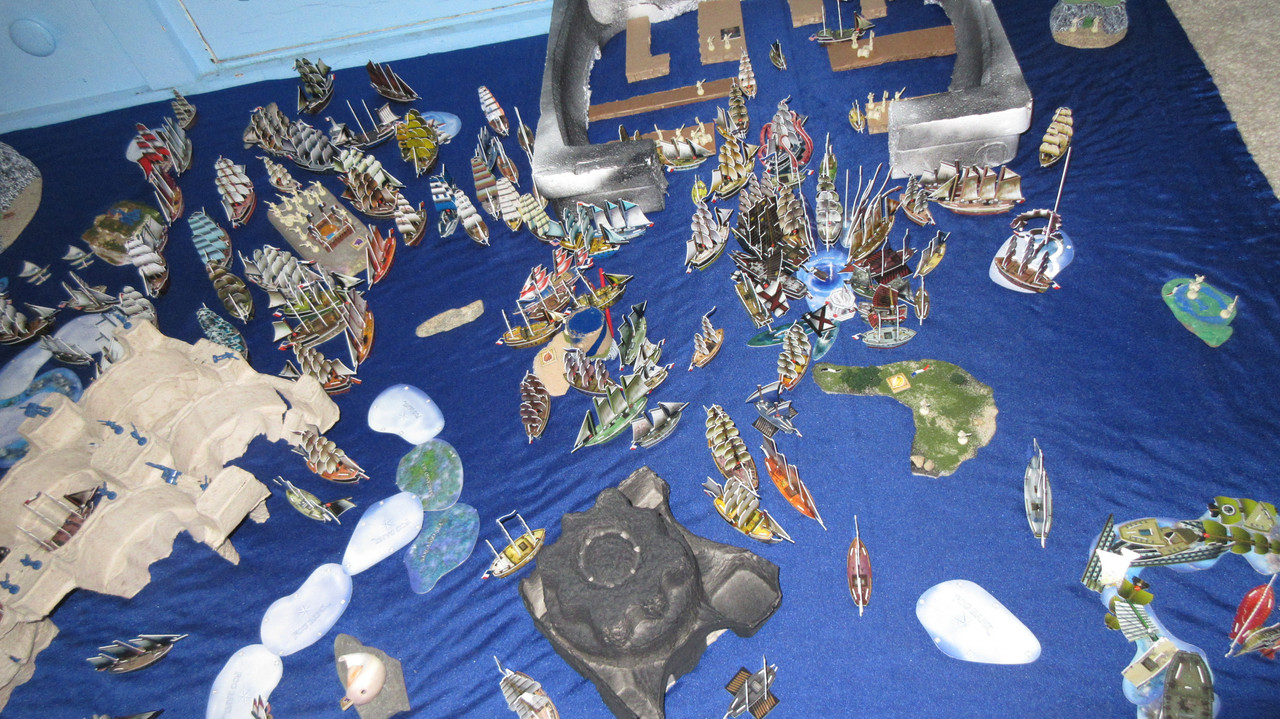 This was actually a bit of a premature report. The French turn isn’t technically over. Combining some food with lots of saved up gold, the French have 441 gold to spend. O_O This is part of the reason I had to stop here, since I didn’t have time today to launch a lot of stuff. However, clearly the French will launch at the Harbor, and possibly even at The Flat as well. They will be well-prepared to defend their homeland!

Going forward, I must warn that this glacial pace will continue, at least for now. It’s doubtful I’ll be able to play much this week, and possibly not at all next Friday-Monday. However, there is clearly a ton of developments just around the corner! Let me know what you think of the game so far, and possibly who you’re rooting for! (even rank the factions in your winning order preference with reasons why if you want)