The French find that their eastern food island has run out of bananas! XD 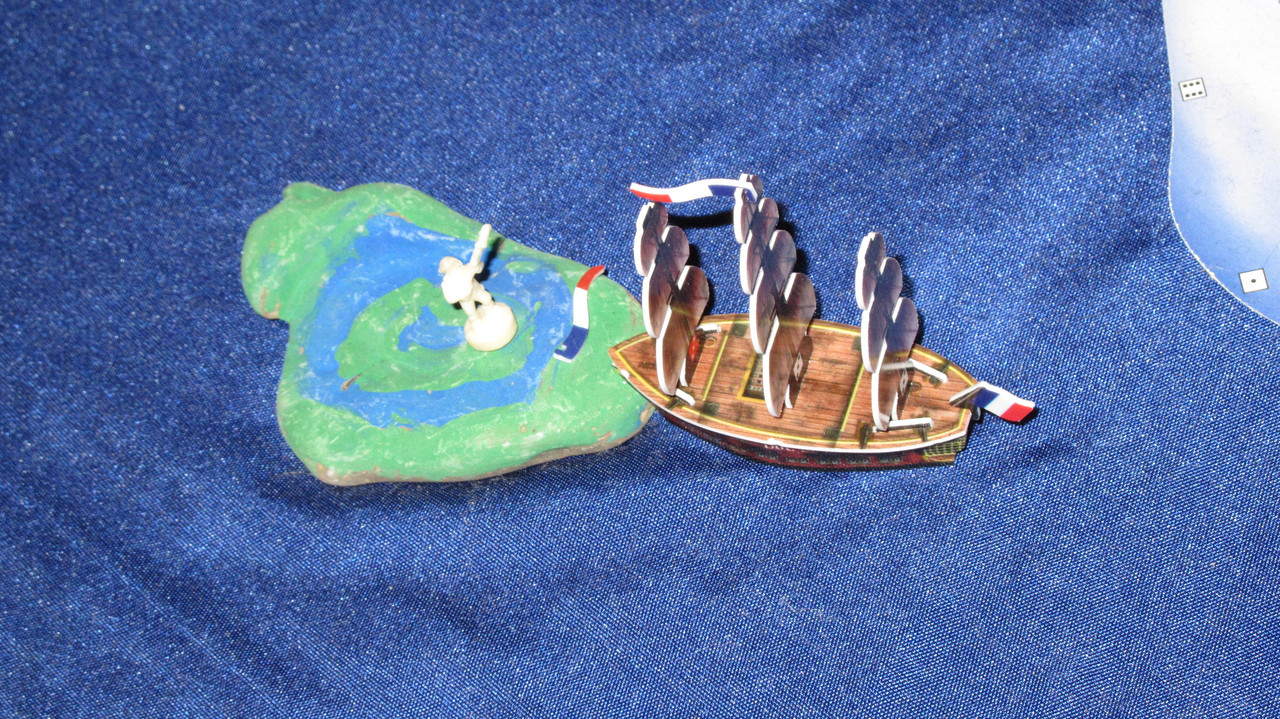 General French operations, with some gunships headed south and the Possession failing to find the Sea of Allost. LaPlante rolled a 5 to emerge from the southwest Karkuda whirlpool, but since there was no room for the ship to be placed there, the ship simply didn’t go anywhere but still rolled (successfully) for damage. In the middle, the Sunrise Fire S-explored the original French island on the Pirate turn. Off her stern, the French lighthouse island produces luxuries, now the most valuable resource in the game. That island will no doubt see more ships than usual dock at its lone beach in the coming turns. 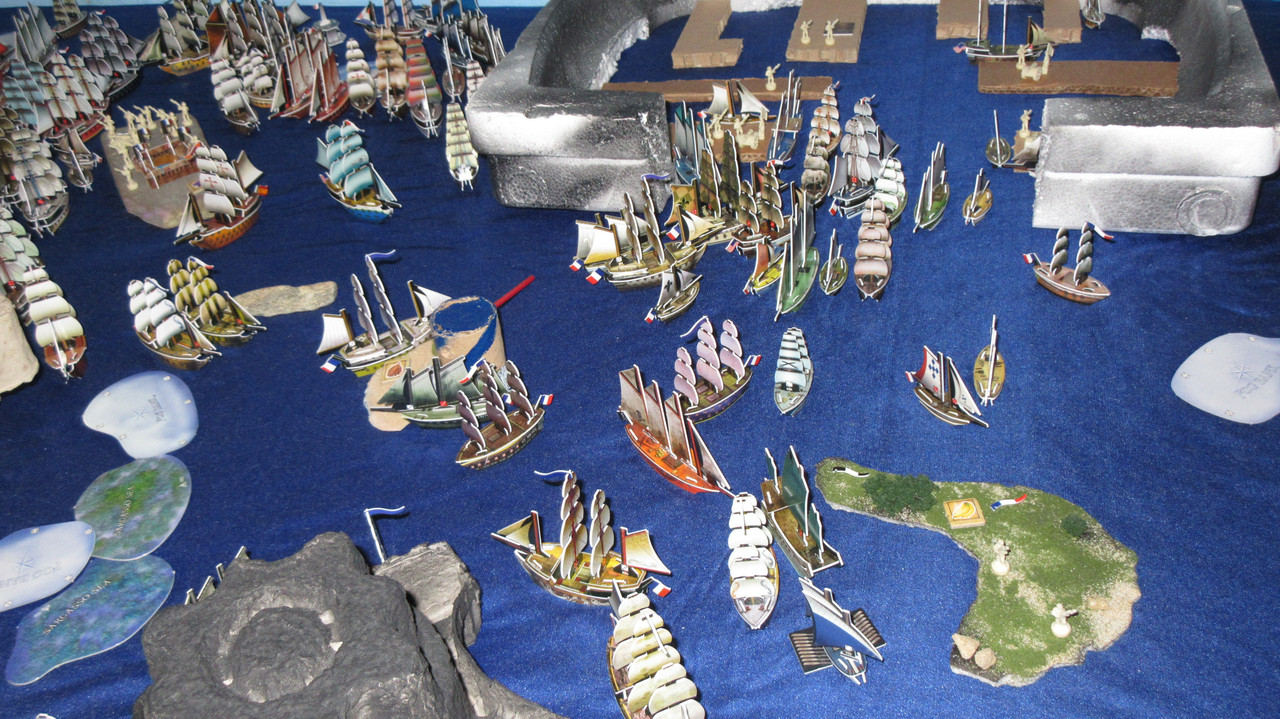 I purposely left the flash off here, to show the dense forest of masts on the battlefield. From the area south of Luck Island to the American HI to the Castle in the east, it is nearly a solid block of ships. O_O 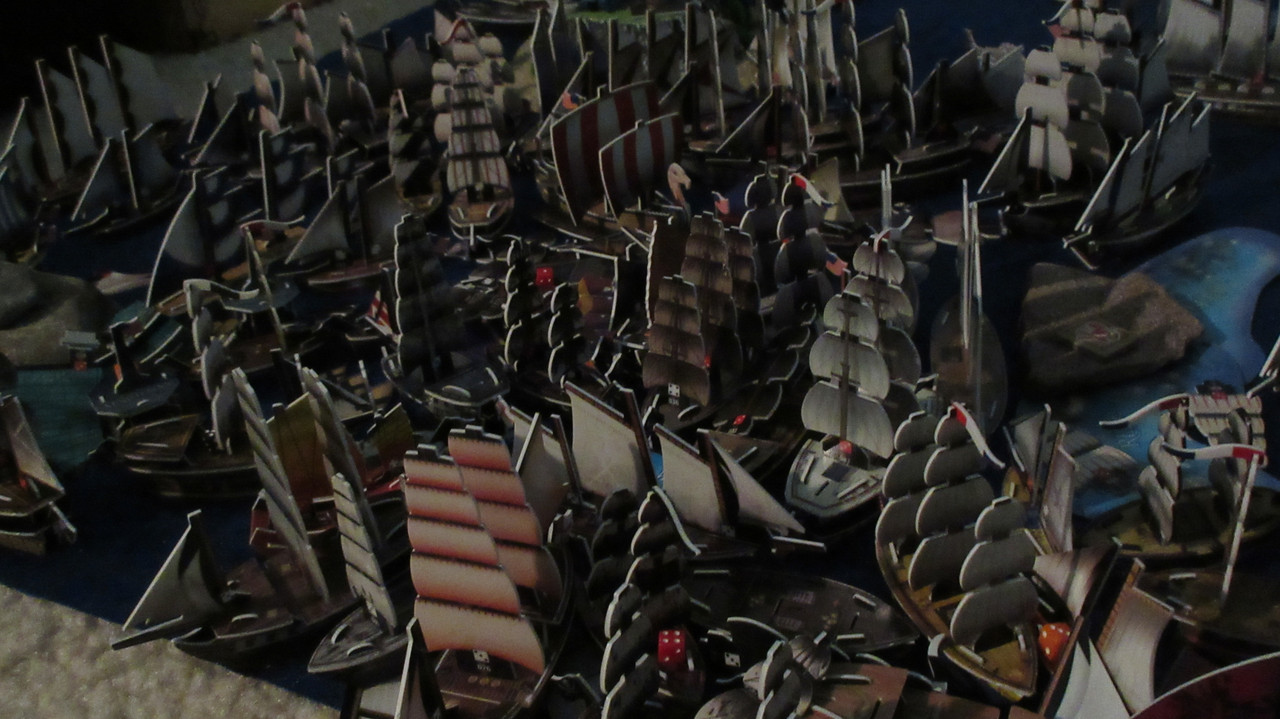 The Americans shot well on their turn, dealing major damage. The Black Cat and Devil’s Kiss have been dismasted, while one more hit on the Ningpo will do the same to that vessel. 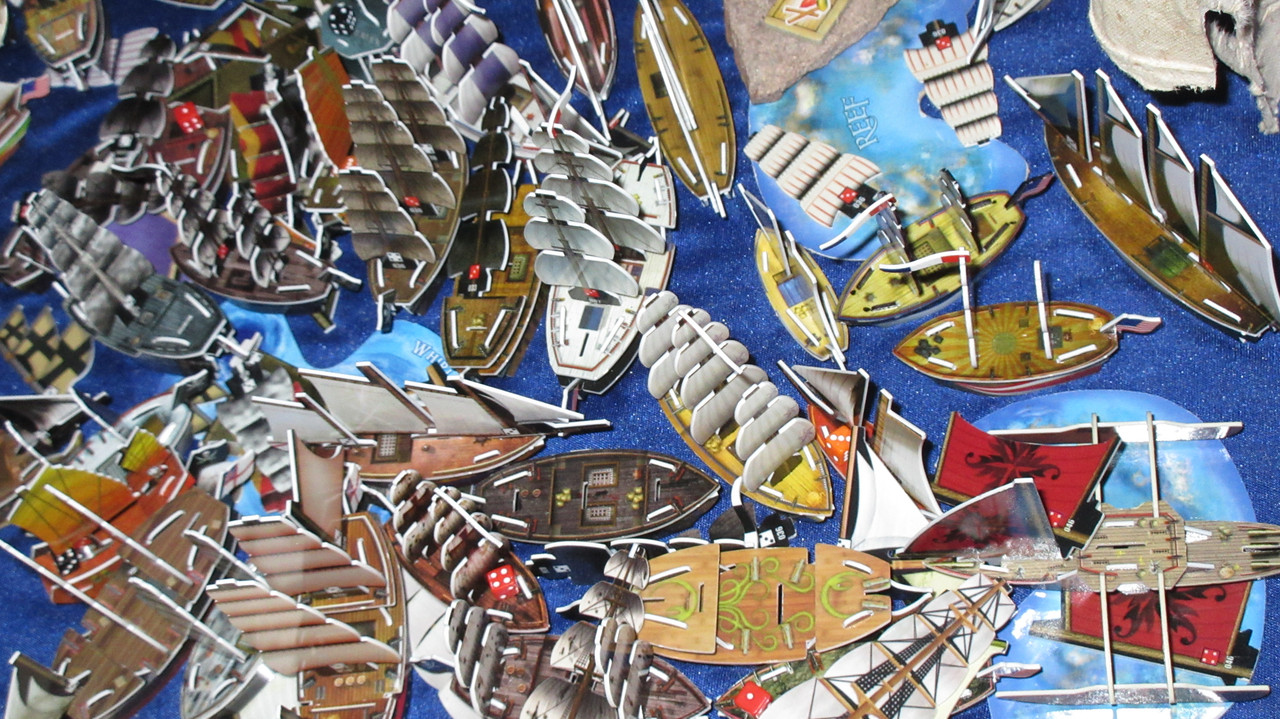 The Queen Anne’s Revenge sank and Blackbeard is dead! Well-placed shots from the James Madison and Minuteman flotilla doomed the QAR after she was hit by a BA from the Ark Royal on the English turn. The other Minuteman flotilla in the area teamed up with the Ghost Walker to dismast the Fuchuan. On the left, the Swamp Fox has gone 2/2 with Broadsides Attacks, her second blast knocking two masts off the Poison Dagger who was then finished off by the Fly. 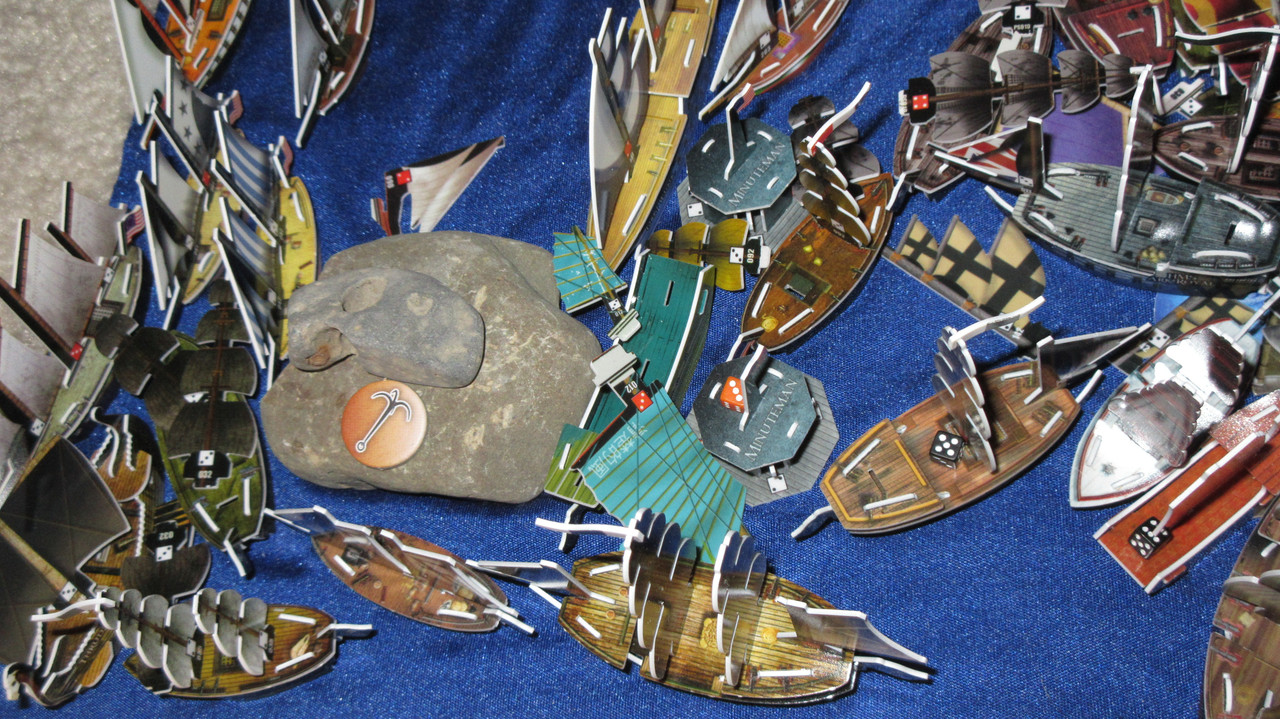 North of the battle, various maneuvers are carried out despite the logjams. The Lynx captured the Gilded Monkey, while the Adventurous reached home with the Xiamen’s Claws. The President and Hudson are home for repairs, and the Montezuma and Lenox hope to join them soon. Those 4 ships are eagerly replaced on the front line by the Septem Maria, Kettering and Quigley. Three VERY intimidating 5 masters are waiting in reserve, but the Pirates are being soundly defeated at this point. The trend of failed whirlpool attacks has really emerged… the Pirates have had success with a few small Caribbean raids, but Ralph David’s attacks in Allost and both battles at the SW Karkuda whirlpool have gone miserably for the aggressors. In fact, this second Pirate loss may become so embarrassing and one-sided that it may make the Pirates change their policy…. 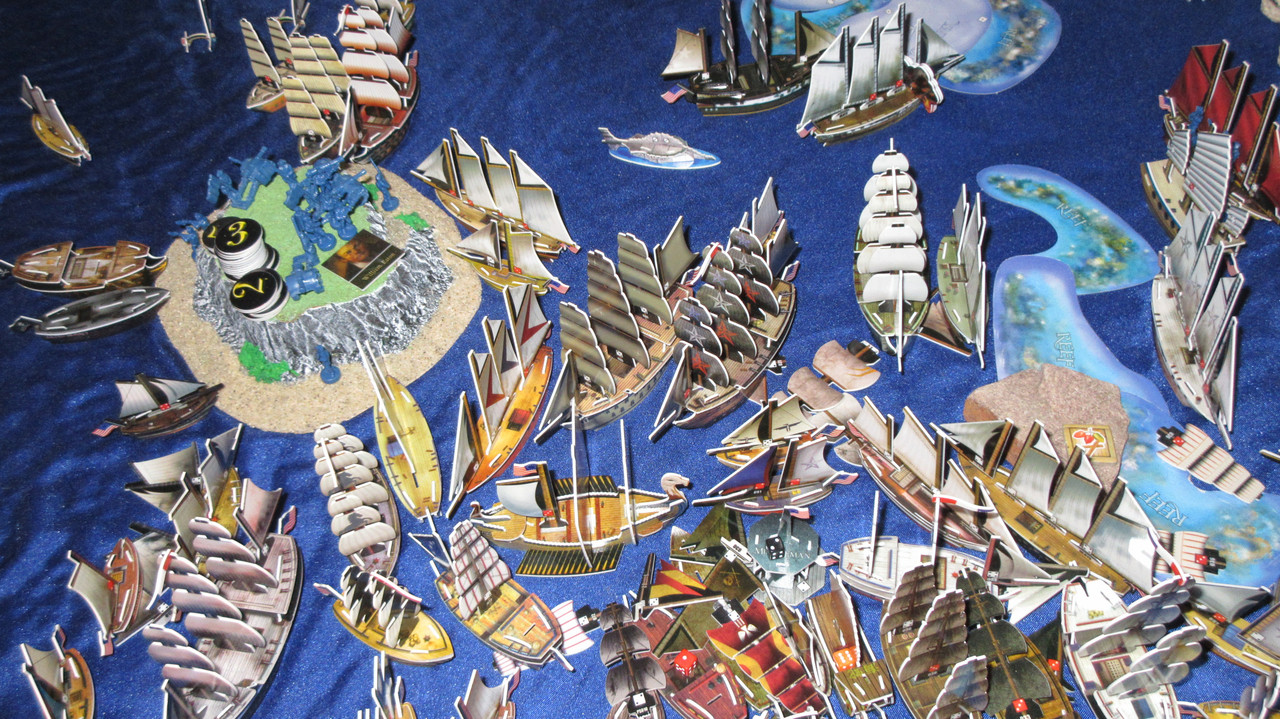 The Enterprise has unloaded the fort upgrade at the Castle!! The Americans will now be able to launch ships from the Castle as if it were a fort. However, some repairs still need to be carried out for the Castle to reach its true potential. The Americans also move their army units S into different positions, further optimizing the defenses. They now have infantry on almost all the ramparts, and the Colonial Trader will eventually arrive with more. 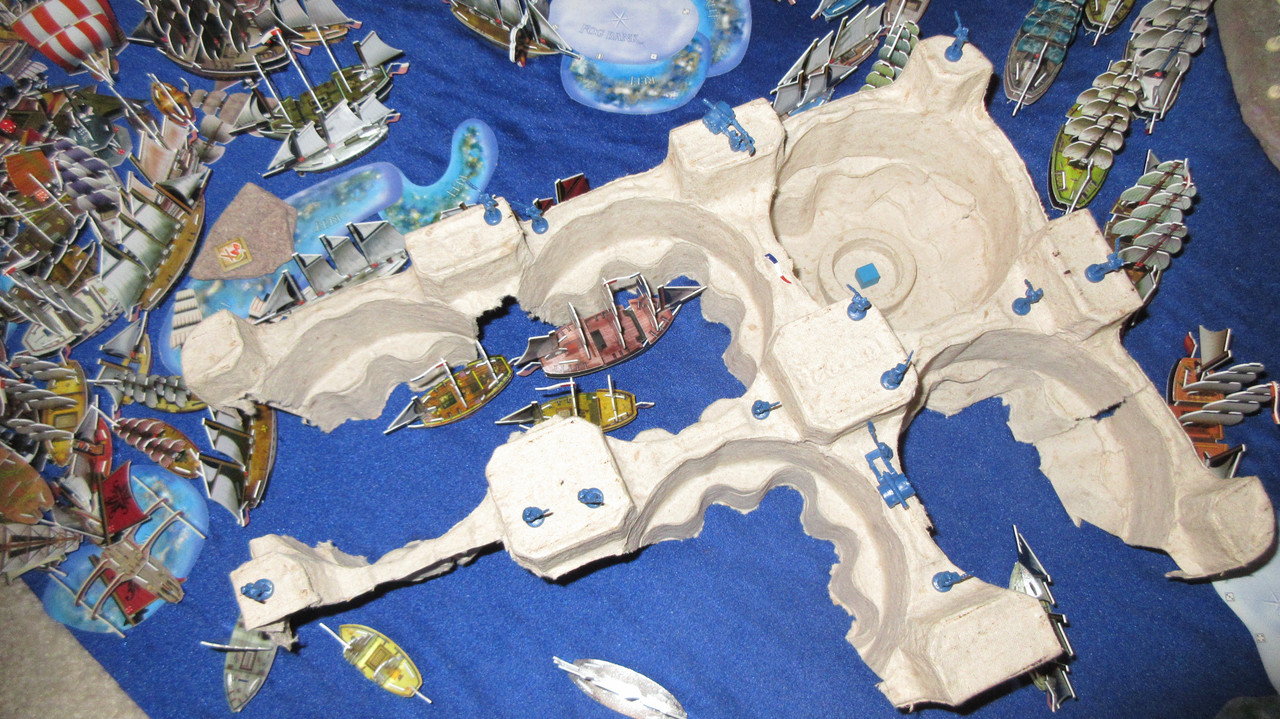 Preble got his AA roll this turn, and the last action of the turn went to the Springfield of all ships. The Springfield is a “cheerleader” ship (she gives friendly ships within S +1 to her cannon rolls) not meant for the front lines of battle. However, the Pirate attack necessitated block ships to stop the Pirate advance early on, and the Americans have done a great job so far despite their occasionally poor shooting. In this case, a very strange thing happened: the Seminole has the same ability of the Springfield, and is within S of the ship. Therefore the Springfield was able to use her own ability from a different source in her two shots against the Satisfaction, a new Pirate arrival. Incredibly both shots were 4’s, which meant they both hit to knock a mast off the Satisfaction but they would not have hit if not for the Seminole being within S! O_O Just a bizarre happening that would only happen in a game of this size, since those ships are hardly EVER worth the points even in large games with 100+ point build totals. 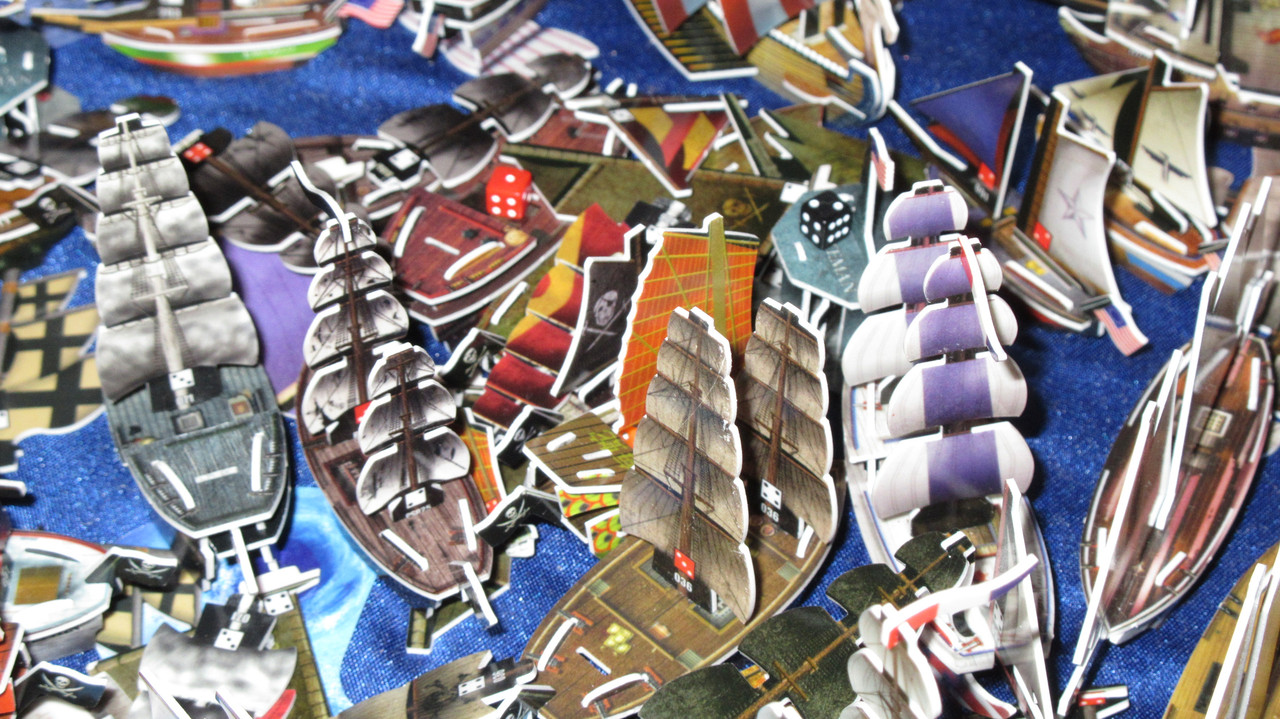 I will conclude this report with some confessions and give an idea of what to expect going forward.

-With this game ballooning to completely unprecedented heights (over 7,000 total points now I would guess, DOUBLE the previous all-time CG high set in VASSAL Campaign Game 1), I have become less motivated to play turns. I love the game more than anyone on earth, but a single turn of play is a very intimidating endeavor. It just takes SO LONG to complete a turn, and launches and resource changes only compound that time.

-The game has had an emotional and physical toll on me. The lack of motivation comes from often starting play as soon as I’m ready to in the morning, and playing nearly non-stop for many hours, sometimes at the rate of 8+ hours a day spent on the game. The longest battle reports have taken me over 2 hours to write, which means that the game has sometimes resembled an overtime job in terms of the time commitment. On the longest days (mostly just Wednesday and Friday) I would estimate that I’ve sometimes spent 12-14 hours in a day on this game alone between playing, planning, thinking strategy, writing the battle reports and posting them on all 3 sites and then putting pictures from the day’s play on Instagram and BGG. I’ve made debatable sacrifices in other areas that I may come to regret if I continue at this current pace.

-The physical toll comes from sitting and kneeling in often cramped positions on the floor for multiple hours a day, as 80+% of the points are concentrated in the Seas of Allost and Karkuda right now. The inevitable tipping things over and setting them back up again is further made annoying by the sheer scale of the game, as I move 250+ ships in a single round of turns. (there may be over 400 ships in the game by now but the Jade, Cursed, and French battle fleets have been largely inactive for the past handful of turns which helps a bit lol) Xerecs is the only one who can even remotely relate to what this game has entailed, but even his CG’s have been non-solo efforts and none of them have gone over 6,000 points to our knowledge lol. Combine that with the game exceeding even my greatest ambitions (I vaguely thought 5,000 could be possible back in September but now at around 7,000 it’s just crazy), and even a player as dedicated as me is now in completely unknown territory.

-The time pressure of trying to finish the game by Thanksgiving has made me worry that I will not be able to reach a satisfying conclusion by then. As a result, there is a POSSIBILITY that the game will continue past Thanksgiving weekend and into December. O_O I would say the odds of this happening are currently about 50/50. Once I make a decision on that I will announce it of course. It all depends on how the next 4 weeks go. I’m also working on Thursdays now at a shift that is not conducive to playing, so Thursdays are nearly out for the next 2 weeks (at least), whereas before I had that day almost completely free. The potential for an extra month of play can also take some stress and pressure off of me and help my life to be a little more balanced compared to going crazy over the game for the next 4 weeks. It could also result in a more satisfying conclusion (last fleet afloat for real this time, but likely still with some artificial resource droughts), which is something I’ve REALLY struggled to achieve in these physical CG’s lol (in fact, not since the RISK game in 2012 has one of my physical CG’s concluded appropriately). So basically, there is a CHANCE that the game could conclude just a few days before Christmas if it gets that far. O_O

-At 67 turns, this game has exceeded both my Century of the Empires game (62 turns) and Economy Edition (45 turns) for the longest physical campaign game I’ve played. Back in September I thought 100 turns was likely, but the sickeningly massive influx of points since Turn 50 has completely made turns take forever so I have no idea what kind of turn count I’ll end up with.

-I now have over 1,250 pictures for this game, which is more than double the 454 for Economy Edition. (which was my previous high for a CG)