Warning: short report here, and the next few will likely be as well.

Turn 64 begins with yet another random resource change! For this one turn, metals would be worth 6 again and textiles 5! This would result in a bunch of launches since those resources haven’t been valuable in a while. 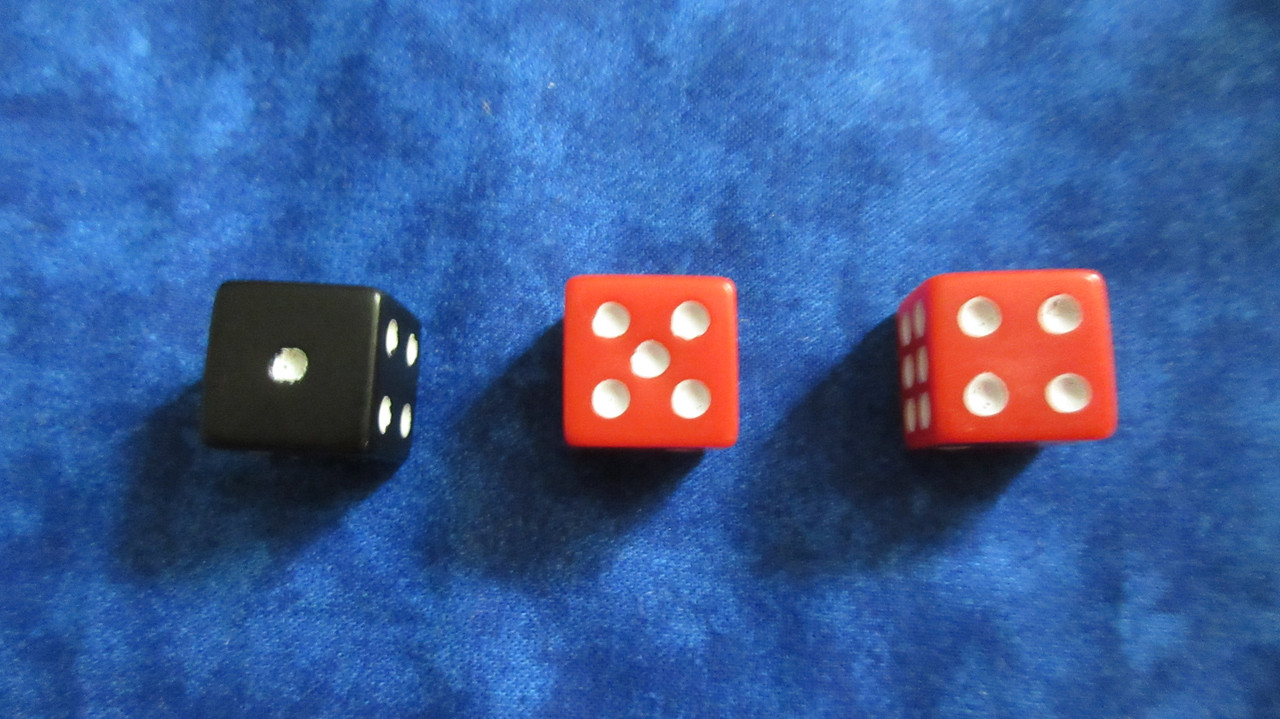 The Pirates send the Xiamen’s Claws through the whirlpool and she arrives in the Sea of Karkuda!! Christoper Moody is in a bad mood! XD 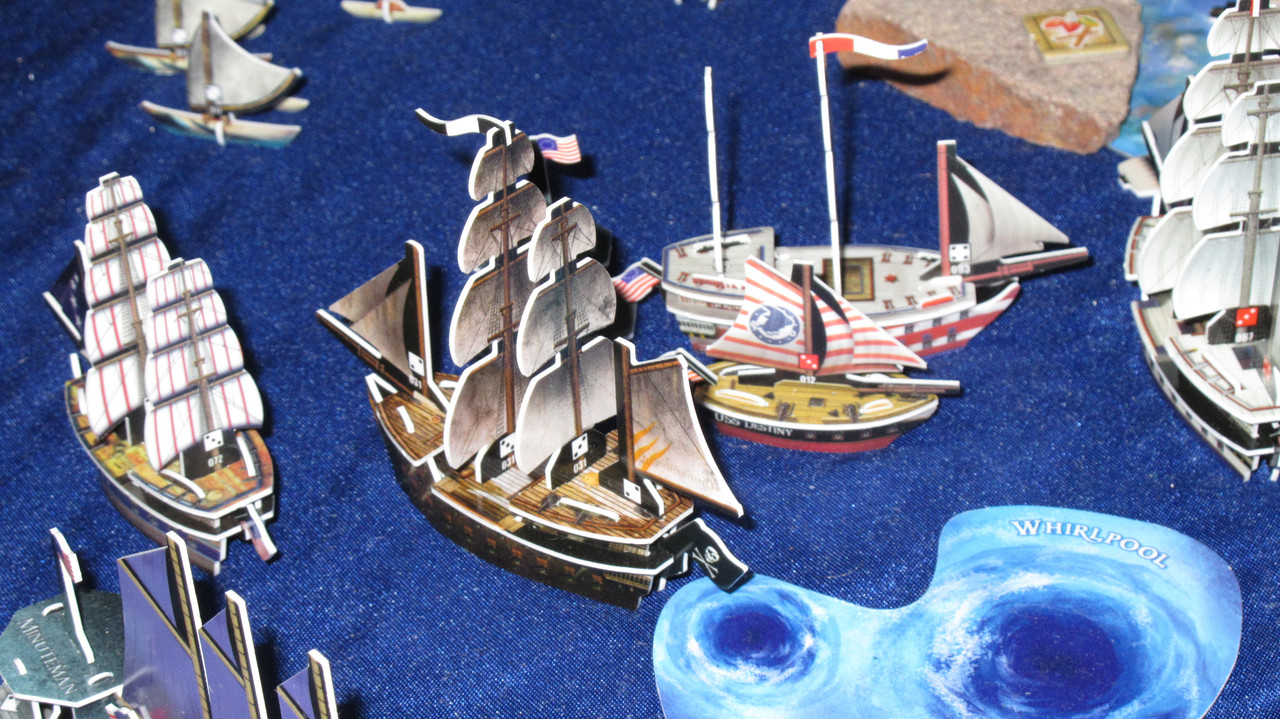 Using an AA from Jean Lafitte, the Xiamen’s Claws spots the American flagship and rams the President! Preble himself is under attack! The XC hit with her 2S guns to damage the President and eliminate a canoe heading home with spices from Ruby Island. However, the 5 is the boarding roll for Preble, who narrowly escaped a brutal fate. The XC rolled a 3 to lose the boarding party 9-8 (the XC gets +1 to boards), losing her helmsman. The President had reroll to save the American crew, but if both their rolls had been low, Preble himself would have been massacred along with the captain and helmsman by Moody! O_O Making a statement, the Pirates strike the American core directly with a surprise whirlpool assault. 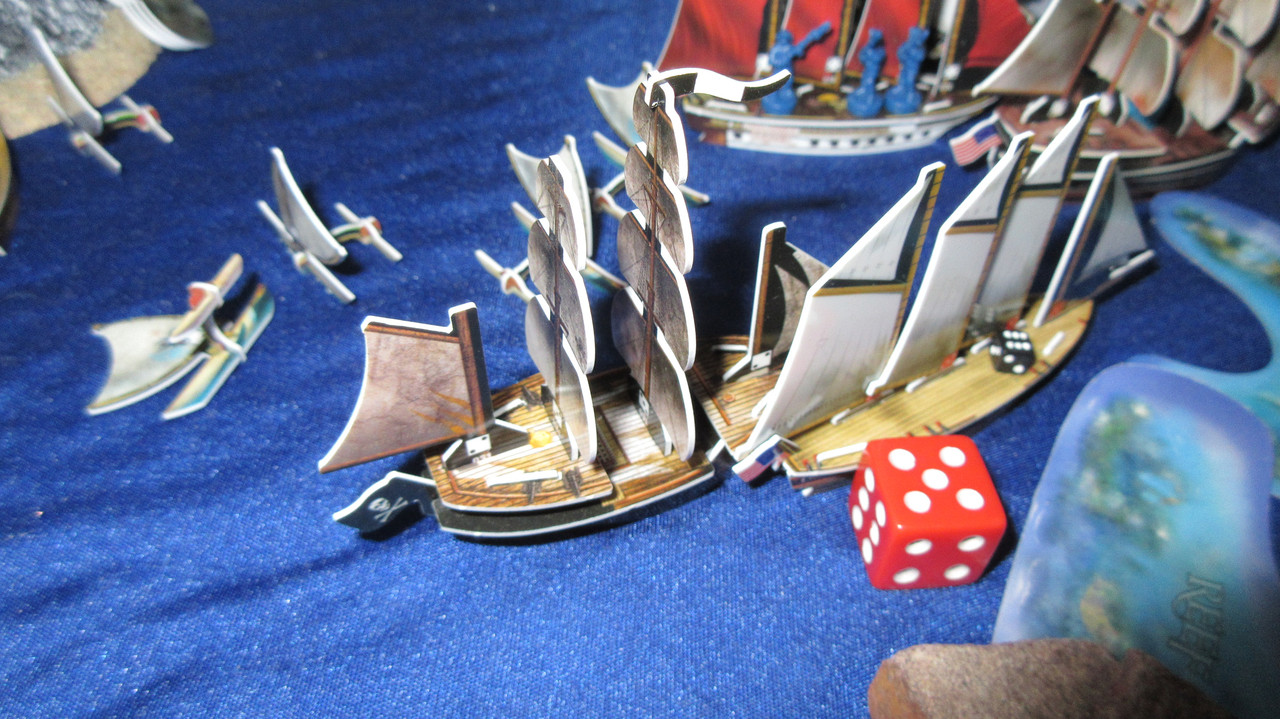 The Americans are under attack! Or, they will be once the Pirates take their next turn to actually shoot. Including the Xiamen’s Claws (an underrated Pirate gunship option I must say), the Pirates send 14 ships through the whirlpool! The Thrud is the only one without a captain aboard, and some HI raiders are among the lot. It’s a decent squadron of mostly average gunships that will put American defenses to the test yet again. However, this time the Pirates plan on fighting harder and longer, as their spending indicates…. 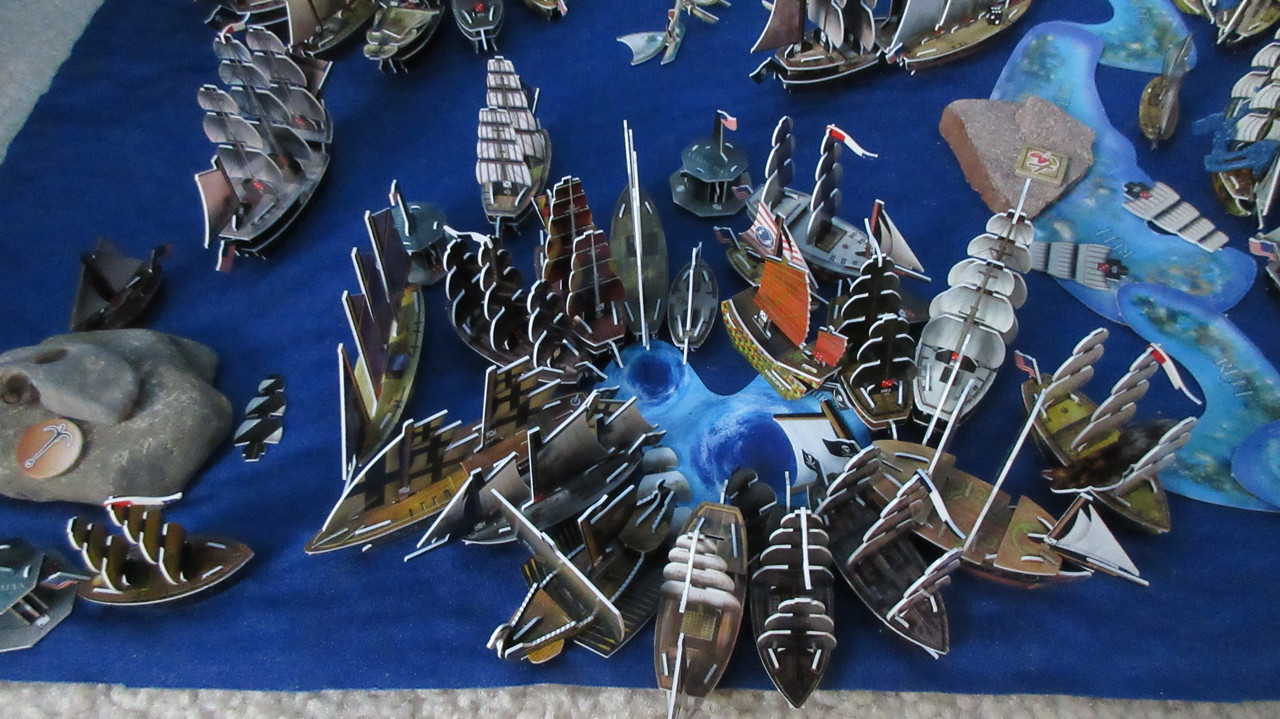 To give you a sense of what the Pirates have been thinking about (since I’ve mostly just done that in detail for the Americans so far), they were not planning this as of last night. That squadron of ships and some others were actually going to invade the Caribbean and attack the English instead! O_O However, a few things changed their mind. First, the Dragon’s Breath reported back last turn, saying that the English had some ships defending against whirlpool attack and possibly a large squadron heading there in the distance (which is true). Second, the Pirates are generally aware that the Americans have one of the biggest fleets in the game, while the English likely do not. The Pirates certainly know this between their defeat at the hands of the Americans and their alliance with the French providing information about the Second Fight at The Flat. Finally, the Pirates would still like to strike the English (and hopefully soon), but for now they are concentrating their war effort against a faction they want revenge on, and a faction that we know (as the witnesses of the point counts) MIGHT be the Pirates’ biggest rival long-term especially with the French as an ally. 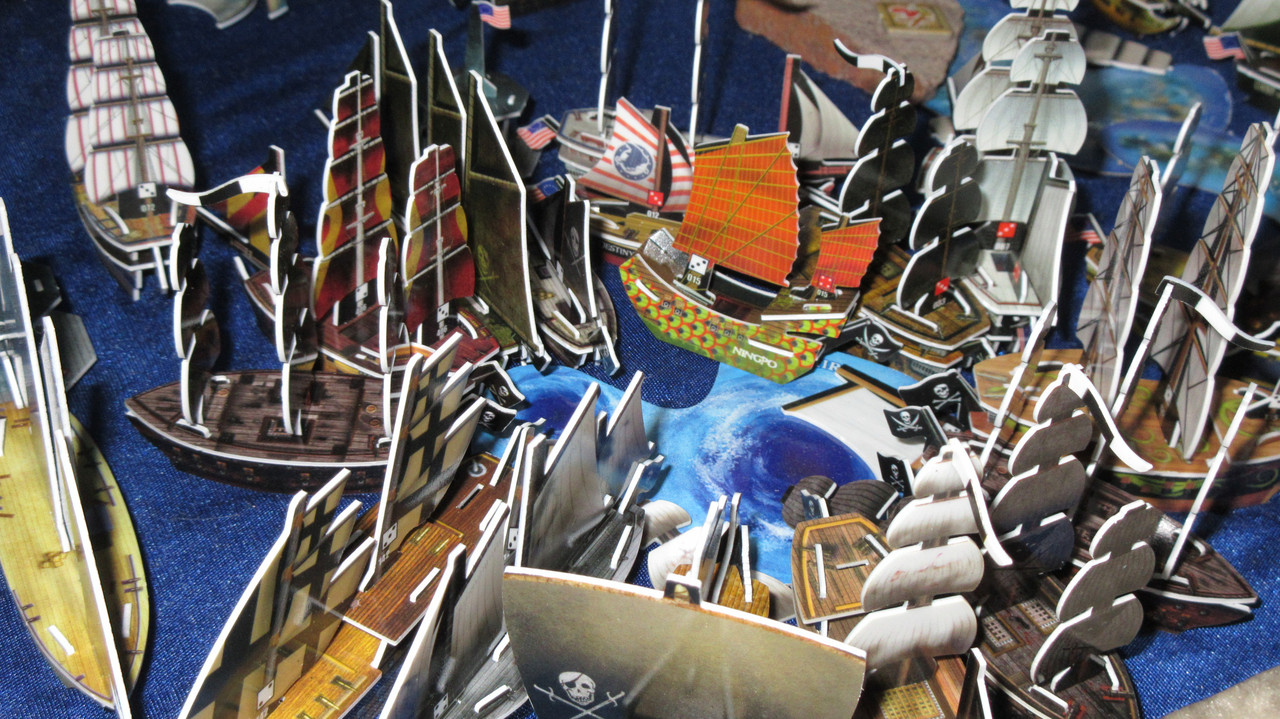 Cashing in 26 metals for 156 gold, the Pirates spend it all on 9 additional gunships!! After their “meh” gunships went through the whirlpool to Karkuda, it was evident that some of them weren’t crewed well enough. Hence, a medical barge. The Raven’s Neck carries regular fighting crew but has the cargo available to also carry 3 shipwrights. She will sail to Karkuda in the hopes of providing repair assistance to Pirate ships in need. Medical barges are best as durable ships that can fight if need be but usually stay back from a fight to distribute shipwrights to retreating vessels, possibly elongating their stay on the battlefield. It’s likely that the battle against the Americans will be too chaotic and crowded for this kind of finesse strategy to work, but the Pirates want to properly support their attack unlike the first battle. Below the RN’s deckplate are 7 more average or somewhat subpar gunships that the Pirates consider expendable (unlike the Revenant for example). The Pirates are simply going to throw massive points at the Americans in an effort to weaken them, distract them, and possibly even raid their HI. However, though these ships may even be less effective than the ones that just entered Karkuda, they are crewed better. All the ships have an oarsman and/or shipwright aboard, ensuring that they will be ready for battle after any potential whirlpool damages. (losing the oarsman or repairing for a turn AT the battlefield rather than having to lose an important mast or helmsman) At the top, the Obago is separate because she will stay behind with the other anti-English ships (such as the Revenge and Black Mongoose, who get +1 to cannon rolls against the English). Therefore it was a dual launch, with most of the ships launched to combat the Americans but at least one to augment the slowly growing squadron which may infiltrate the Caribbean at some point. 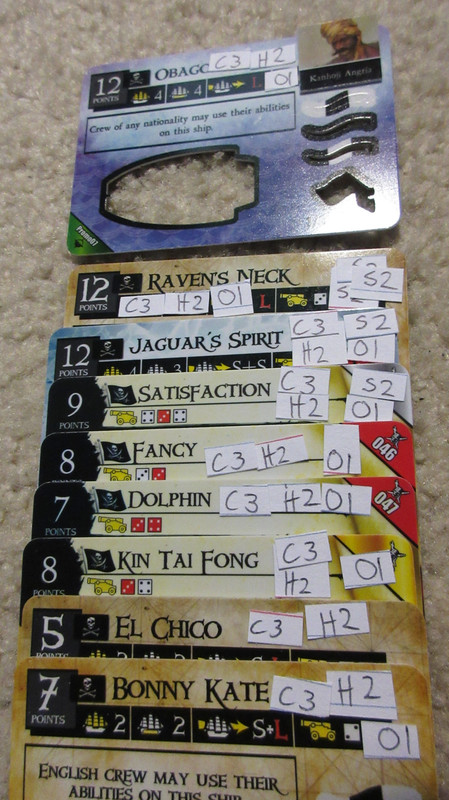 Mission leads the Celtic Fury and other ships towards the Tunnel. Up top, sheer firepower awaits the Americans and (probably at some point) the English. The Full Moon, Fuchuan, Zanzibar, and Poison Dagger can reach the whirlpool next turn, and they’ll probably join the fight against the Americans. The Golden Medusa and White Rose will likely stay behind from the battles and be reserved for conflicts later in the game. The Black Mongoose and Revenge will wait for reinforcements, while Blackbeard has his own agenda. The Recreant and Accused will likely stay behind after their disastrous experience in the first American battle, but add them and the Kirbac to the squadron just launched from Dead Man’s Point, and the Pirates have some serious firepower at their disposal near whirlpools. In fact, doing a quick count reveals about 34 gunships between the ones in Karkuda and the ones at DMP or near the northern whirlpool! 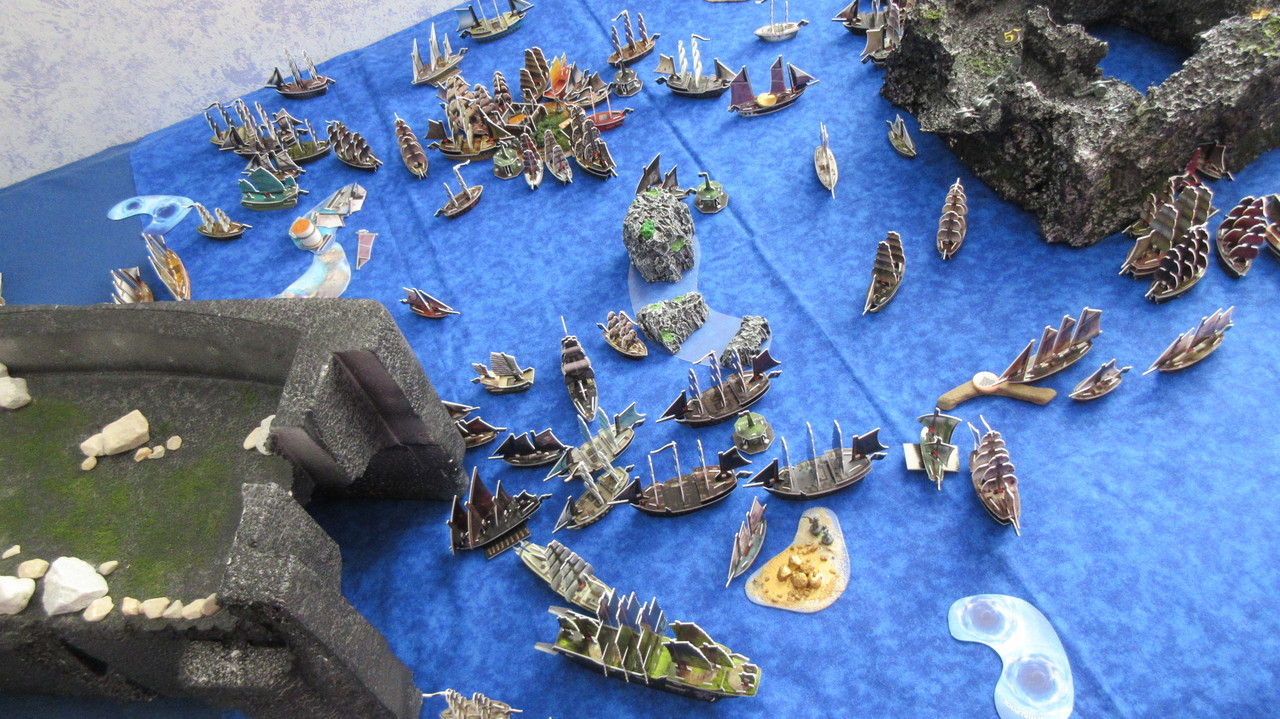 The Jade Rebellion turn was mostly uneventful, save for this. The Hlidskjalf AND Grand Temple both got very favorable fog rolls to luckily come out near the Needle to give the captured Sea Crane assistance! However, even with decently accurate cannons, the two ships only shot 2/6! This leaves the Needle able to sail back into the fog on the Cursed turn, at which point the Sea Crane will be lost. 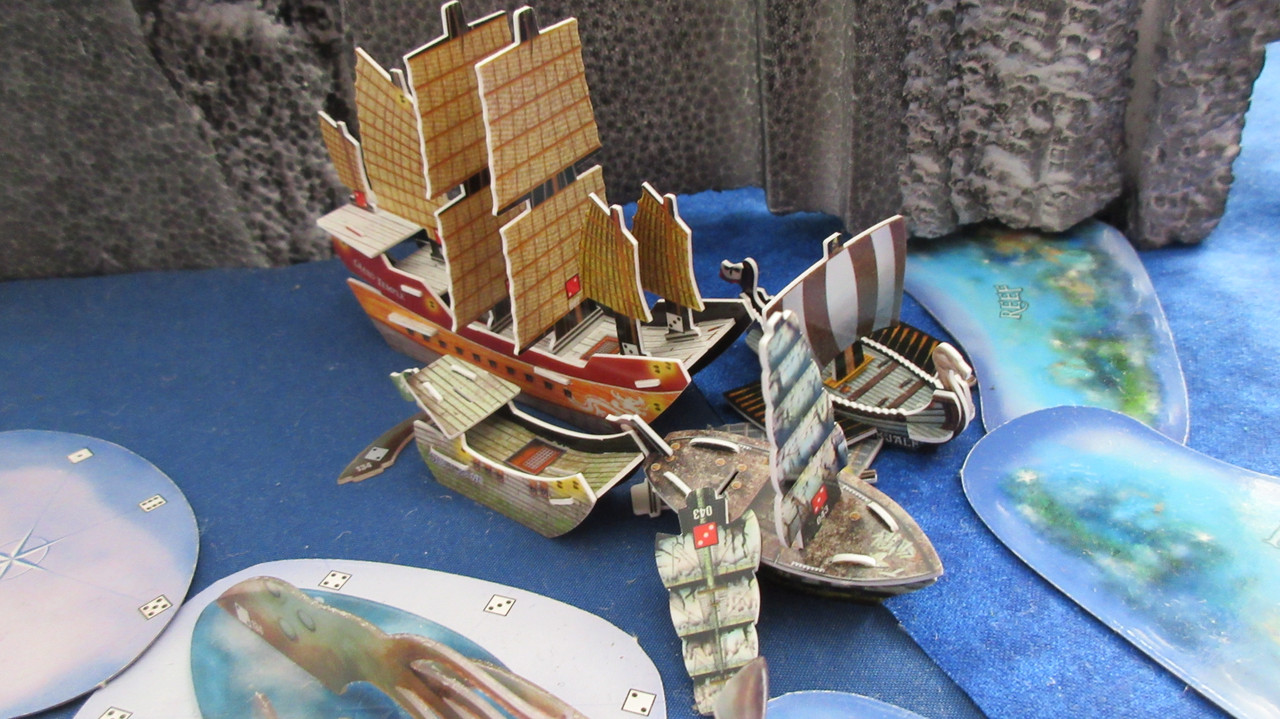