Wow!!  What a fun day of play for me in VASSAL Campaign Game 4!  After PirateAJ14 and Xerecs completed their latest turns, my four factions were up.

As always the Pirates led things off for me, with a bunch of their new ships scattering west of their home island.  The canoes are headed home, while the Zeus is in the process of “round earthing” to the northern half of the map. 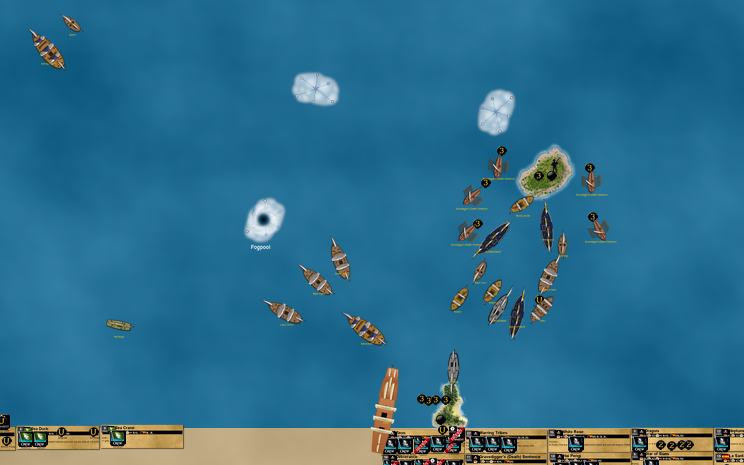 Speaking of the northern half of their home island… the Selkie gets in action!  She was finally able to land a sniping hit on one of the Corsair galleys, lighting the Sphinx aflame with exploding shot!  This put a small dent in the Corsairs’ plans and killed a Corsair oarsman. 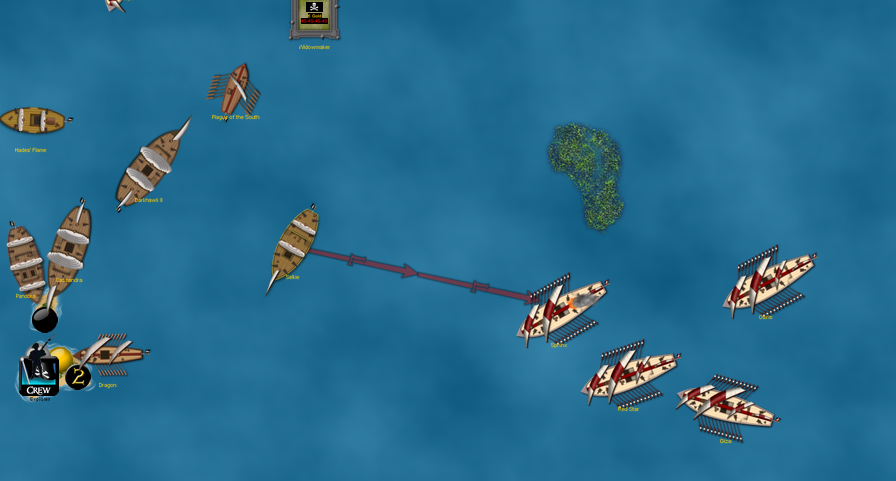 The Pirate strategy was one of deterrence.  The Selkie was out front taking potshots at the Barbaries, but she was soon joined by numerous fleetmates.  The Agnis Crystalis (5 master at bottom center) and Splinter have been following the Selkie southwards.  To augment that 3-ship line, the Pirates began to bring their hybrids to bear.  The Darkhawk II and Akua Lapu headed southeast to up the Pirate numbers, while the Widowmaker flotilla and Rover (latter designated as a tugboat, mostly for derelict rescue) helped to plug the gap between the Agnis Crystalis and the much slower Splinter.  The captain of the Agnis Crystalis shouted a warning to the captain of the Sphinx… “we are prepared to use our WMD!”  The Corsairs weren’t entirely sure of what that meant….

The Eagle stayed on the west side of the textiles island, both because she couldn’t maneuver towards the Corsairs very effectively this turn and to protect the other side of the island from potential Viking attack in the near future.  At the top of the picture you can see 2 of the 3 new Pirate ships – they took in textiles and metals this turn and spent all 79 gold it amounted to.  The Black Pearl and Harbinger are decked out with action generators, while the Sapphire Sea (one of my custom schooners) was launched from the southern half of the HI but plans to join the others and head south. 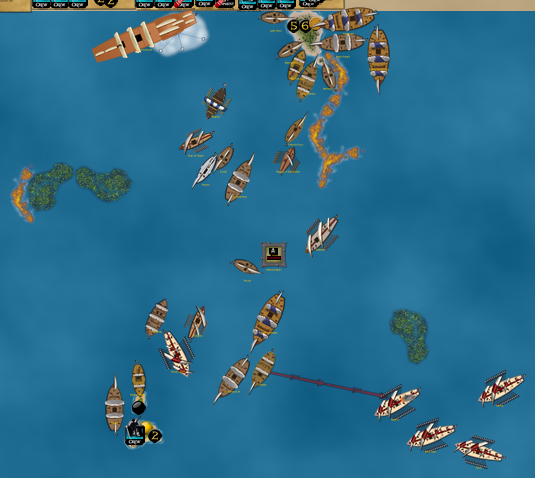 However, the northeast wasn’t the only area with tension.  Multiple American ships are bearing down on the Cursed home island – 3 of their classic schooners, with a couple 5 masters coming behind out of frame.  The Cursed have loaded up the Grand Misfortune with a bevy of UT’s.  Three small Cursed ships are clustered in a fog bank as most of the other Cursed ships head southeast to get textiles (quite the popular resource these days).  The Wisp is off in the southeast having serious difficulty getting through the ring of fog that surrounds an island in the Turbulence area. 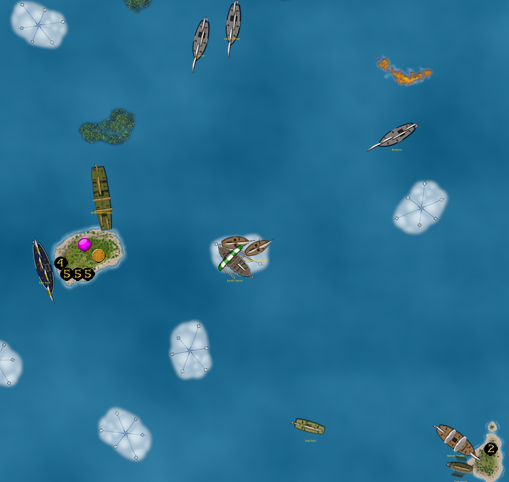 The Vikings had a little awkward moving to do but have a bunch of ships headed home with lumber, currently worth 4 gold apiece.  Then it was time for the Barbary Corsairs….

The Corsairs had been waiting many MONTHS for this moment.  A moment in time where they could finally get back at the Pirates.  The Pirates claimed the textiles island for themselves, and now had a town on it to prevent the other factions from loading any resources from it (both the Corsairs and Vikings had explored the island previously).  With careful planning, optimal UT placement, and some powerful custom warships, the Corsairs were finally both ready and able to make a calculated strike!

However, at this point in time, it could be argued that an attack on the Pirates looked like a bad idea.  The Pirates had not only launched the custom Stormcloud 10 master in recent turns, but also the Zeus last turn.  They had many more ships in their fleet than the Corsairs, including more gunships and various hybrids being used to escort resource carriers to and from the textiles island.  However, the Corsairs wanted to make a move NOW, and since the Pirates have super-valuable metals readily available, they would likely only get stronger and stronger as time went on.  The Corsairs were afraid that the Pirates would beef up their defenses even more in the coming turns, and decided it was essentially “now or never”.

From a few pictures above, you can see the quartet of custom 4 masted galleys the Corsairs had sailing west: Osiris (the flagship), Red Star, Sphinx, and Giza.  The Corsair turn started with great luck, getting an AA from Kheir-ed-din aboard the Crescent Moon and the Osiris getting an SAT from Danvian Arrestelos.  With that, it was decided.  The Corsairs would carry out their sudden attack as planned!

The Sphinx got things started!!  Sailing up to the Selkie, she connected on 2 of her 3 shots to set the Pirate sniper aflame with a newly revealed fire shot!  Paying no heed to the flames on their own deck, the Corsairs showed they meant business and would use their war galleys as needed!

THEN IT WAS TIME.  For the ultimate attack!!  The Red Star moved S+L+S into position, carefully maneuvering to get close to enemy Pirate vessels while maintaining a strong line of sight on many of them… she was then given an AA to shoot! 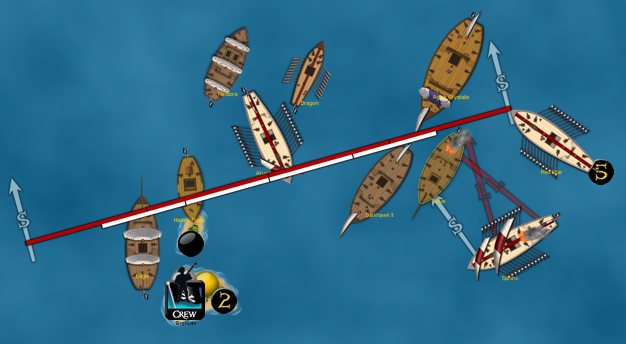 In a HUGE move, the Corsairs knock out 14 Pirate masts, with SEVEN ships in the path of the tidal wave!  From west to east, the Eagle, Hades’ Flame, Akua Lapu, Dragon, Darkhawk II, Agnis Crystalis, and Selkie all lost 2 masts.  (Woelf’s recent answer to a different question confirms that the wave blast should eliminate masts as normal despite the 2 hits per mast house rule we’re using in this game)  The Red Star lost all of her masts, but the Corsairs have a brilliant plan to scuttle her – with the Resurrection Codex!  XD  Their luck continued, with the ship rolling a 5 on the successful scuttle attempt.  As long as the Red Star isn’t towed before the Corsairs’ next turn, she’ll get a “super-Eternal” effect and show up fully repaired at the BC home island!  This had been the Corsairs’ plan for the Red Star all along – essentially sacrifice the ship at the opportune moment to cause maximum damage with the Trident, then scuttle the ship and get her back to the battle as a “normal” ship as fast as possible via the Codex.  😀

The Corsairs weren’t done yet!!  The Osiris used her SAT to move 6S and broadside the Agnis Crystalis, hitting 3/4 to take out a mast (and a half).  Then it was the Giza’s turn.  Continuing the amazing Corsair luck throughout the turn, she got her built-in EA and was able to move S+L+S x2 to dock at the Pirate textiles town!  Shooting next, she revealed yet another Corsair UT – Fireworks!  However, it didn’t help, as the Giza only shot 1/3 with improved cannons to partially damage the Darkhawk II.

The Giza still had an important final role to play – attempting to capture the town!  She rolled a 6 and the textiles island has changed hands from Pirate to Corsair!!  This was the Corsairs’ main goal all along – claim the important island as their own!!  To put the final icing on a delicious cake filled with great combos and tactical prowess, a new custom crew appeared on the Giza’s deck – Ibrahan Vosely, who prevents the ship from being shot at while docked!  Now the Giza can sit at the island and protect it if needed, possibly providing a useful buffer against the likes of the Eagle, who has a captain on the west side of the island. 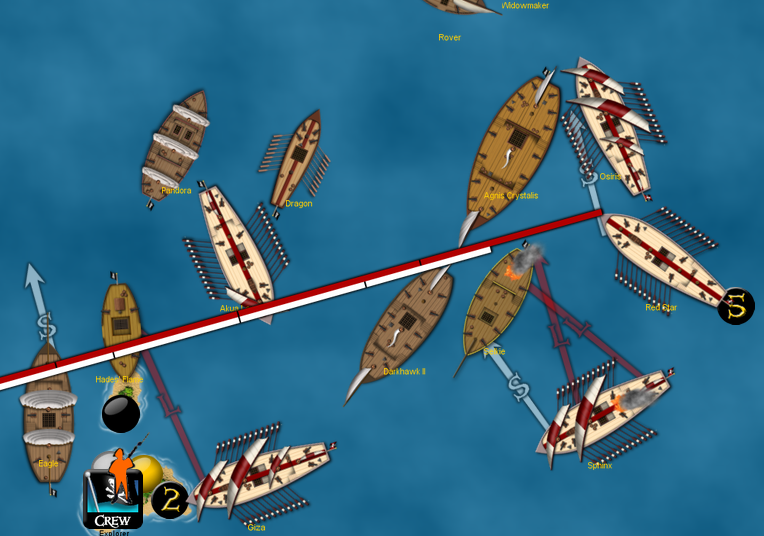 Look at the Carnage!!

(the white pennants represent partial damage, or the first of two hits required to eliminate each mast)

You can also witness footage of the entire attack!

For now at least, the overall theater is in favor of the Barbary Corsairs as the first major conflict of the game has erupted in rather dramatic fashion.  The Pirates still have considerable firepower in the area, but perhaps most important is the firepower that will be arriving in the coming turns.  The Pirates have a pair of 10 masters in addition to the four gunships headed south from the east side of their home island, not to mention any launches in the coming turns as valuable metals continue to pour into Pirate coffers.  The battle for the coveted textiles island has just begun, and it looks like like another faction may even get involved – notice the Viking ships Diversion and Muninn sailing southeast….

The Algiers and Crescent Moon have headed west from the Corsair HI for as many as three reasons: provide firepower backup for the main gunships; gather textiles from the island now that they are able to once more; if the Corsairs lose the battle quickly, tow home any potential derelicts they can salvage.

After last turn the Corsairs reached out to the English about sharing in the valuable spoils of this textiles island that the English have been going to.  The English are fine if the Corsairs explore and load the resource, and so they have done so with the Queen of Sheba and Marrakesh.  Additional galleys are on their way, but the Corsairs hope they can make the shorter trip west (instead of south) if they can retain control of the contested textiles island.

A shot of the whole ocean shows the fleets growing at various rates, and the first real hotspot of hostile activity!  (right click and open in a new tab to see full size!) 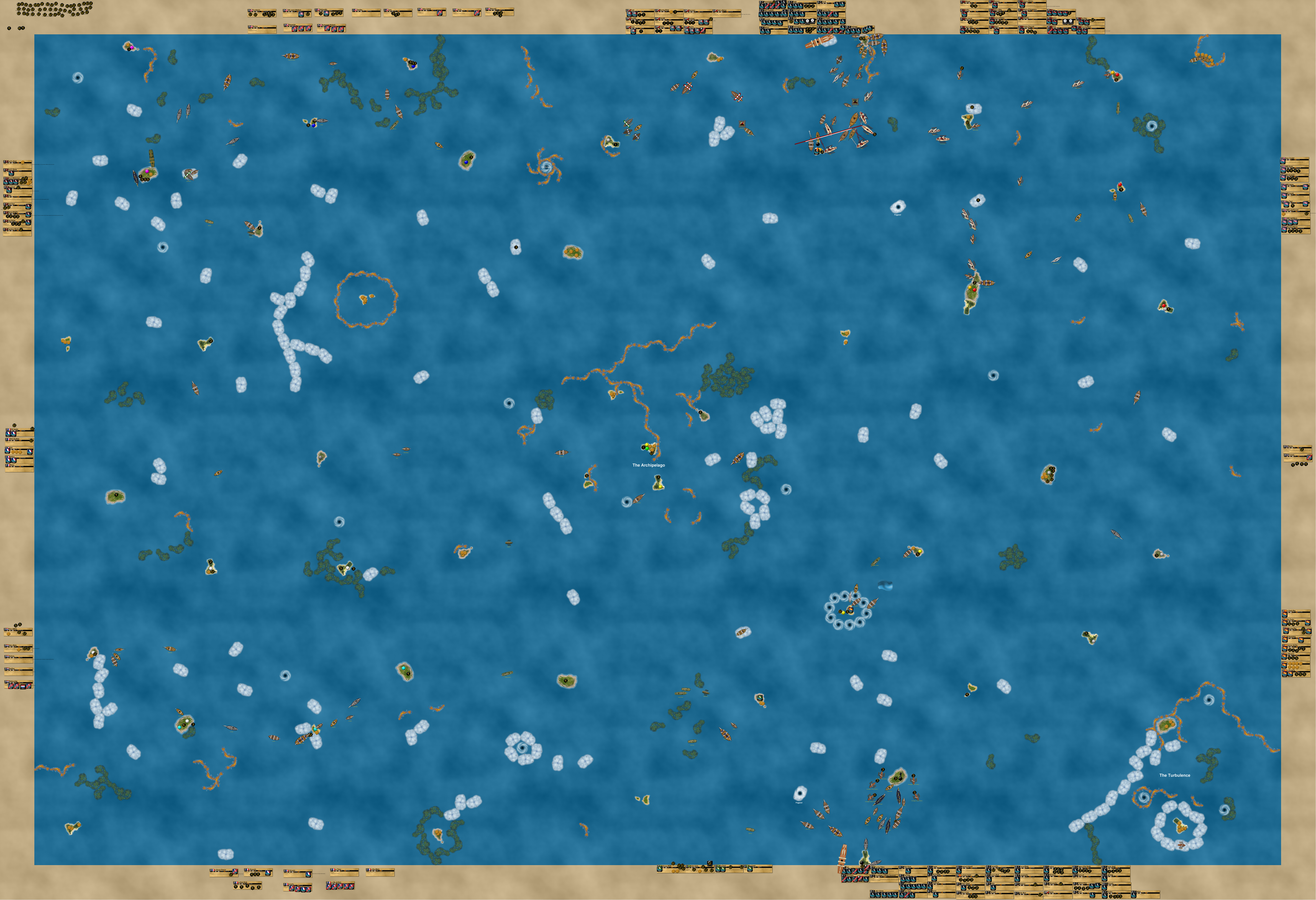 PS: The post has “another” in the title due to all the grand campaign game attacks I’ve done in the past (though this is the first “big one” of CG4).