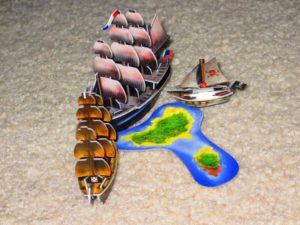 Ready to sail out!

Here is a fleet I’ve used with substantial success. Check out how it did in these battle reports (I plan to eventually redo those battle reports with the pictures).  I created it around January 1st 2015, and it’s been used extensively since then.

Participating in VASSAL Tournament #1, this fleet finished second by losing in the finals to UPS 5.

This fleet managed to win an epic 8 fleet multiplayer game, which is really cool.  It also came in second place in a 12 fleet game, making it one of the few fleets I’ve seen that is somewhat objectively good at games with lots of fleets involved.

It did quite well in VASSAL Tournament #2, where you can see even more battle reports!

After losing in VASSAL Tournament #2, this fleet’s record is now 14-12. It’s my third-most-tested fleet that I’ve used in games.

What I find amazing about this American Pirates fleet is that it’s not even optimized for competitive play, yet lost in the finals of one tournament and in the semifinals of another, more competitive tournament.  You could easily swap out the Bandido for the Banshee’s Cry with a helmsman and explorer, and even swap out the Amity for the Bloody Jewel and another cheap Pirate gold runner (or two with Rover + Mermaid, etc).