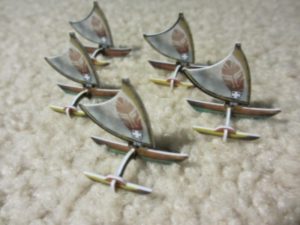 Simple but hopefully effective. At such a low build total, there will only be so much an opponent can throw at these ships. The key is that the canoes start at an island – by the time any enemy gunships can get going, the canoes can be on their way home. If there’s any gold left on their island, the Alquimista can pick it up since the island has already been explored. If all goes well you’ll have an extra 7 gold after one big trip, which could be enough to tip the scale in your favor. Just watch out, because a lost boarding party or a fast gunship targeting the canoes could spell doom.